Destroy All Podcasts DX Episode 72 Side B - Macross Frontier 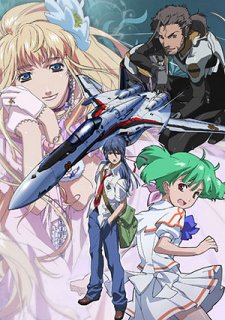 This is the second part of a two part podcast series on Macross Frontier.

It's about spoilers (but at least this time we have the annoying spoiler warning sound effect to prepare you), climactic anti-climaxes, and can space bugs really learn to love?

Click [HERE] if you don't care about the Zentradi.

Battleships punching each other.

I think that wasn't a whole planet--it was just like a "forward recon unit" or something.

also, you forgot to mention that when Ranka is singing to the Zentradei, she winks at the camera and stars shoot out of her. STARS, people.

Macross has holographic technology to the point that Sheryl can do instant wardrobe changes and every cellphone has Z axis screens, and your gripe is that Ranka can shoot stars during a choreographed dance?

Provide some context. WHAT wasn't a whole planet? What are you talking about?

The one with Kamjin and Breetai, and they set off the MDE bomb and blow it up. It wasn't "a whole planet of Zentradei", it was just one base.

Uh man, the Dimension Eater destroyed an eighth of the planet. It was just torn out of space and time. You going to tell me removing an eight of a planet isn't going to collapse the ecosystem and kill everyone on the planet?

I think he's just saying that it wasn't a planet full of Zentrans, and that the only where anyone from civilization lived was the base. Dunno, still trying to open podcast.

It's worth stating the reason's they revolted. You guys sort of glossed over this section, but it was one of the few arcs that used previous Macross lore properly.

Ok this fleet of Zentraedi never really supported unification, so they were already a little angry, but hey, at least they are getting cultured, so things aren't half bad. Things proceed and eventually they are sent to some backwater planet that can barely support life to...make a military base? Maybe the N.U.N.S were just trying to get them out of the way because they're a wild card, who knows.

Point is, they already didn't like unification and they are now being deprived of the reason unification began. They are on a back water planet and they aren't allowed to fulfill any of there Zentraedi urges, so Kamjin 2.0 takes advantage of this and begins a rebellion. Of course Kamjin 2.0 just wants to go back to old Zentraedi ideals, meanwhile the people he is leading want to either get what they were promised in the union or, if that fails, go back to old Zentraedi ideals.

Of course all this could only be inferred from someone that has seen the previous series, so it would have been lost on new viewers.

I would also like to say I disagree with Macross Plus as an introduction to Macross. Plus and Zero don't act like Macross series. Thematically, emotionally, and presentation wise they just don't fit with the bulk of the franchise. Plus would just confuse someone as to what the rest of Macross is. Someone summed it up as "Macross OVAs are serious shows with silly plots while Macross TV series are silly shows with serious plots."

I just got here and listened to some of your awesome podcasts. I realised that you haven't made a podcast of the space opera "Legend of the Galactic Heroes" which is unlike most mainstream anime series. Especially since the series is quite flawless when it comes to storytelling and characters. I would love to hear a podcast concerning this; maybe even finding some flaws within the story(if you can).

Anyway... It was very interesting listening to this as well as the other podcasts.

The problem is that to do a podcast for LoGH we'd have to watch the whole thing--which is 110 episodes of main story, plus two movies, plus however many of the Gaiden we can stomach. Given everyone's varied schedules, we would be ready to do the podcast sometime around May 12th, 2014.

For the record, I think LoGH is completely awesome. Just be aware that every so often there's an episode with surprisingly gory violence.

I intend to do the two movies at some point but that's it. It's just too damn long. Fortunately, they are the start of the series so they stand alone just fine.