Over 1000 years ago, the demonic Orgu- soulless creatures created from the despair and hatred of humanity- fought a terrible war against humans. Side-by-side with the mighty Power Animals, the ancient Gao warriors were just able to defeat the Orgu generals, and drive them back into the deepest places on Earth. By 2001, the Orgu had slowly gathered their strength once more, thanks to humanity’s mistreatment of the world. One by one, an Orgu left their domain known as the Matrix, and ascended to the surface to conquer and destroy, gaining power all the more in the name of their grand stone-encased Orgu Master. They usually took on the form of inanimate, non-living objects, such as streetlights, magnets, barbed wire, etc, and were recognizable by the long horn on their heads. On the mystical, turtle-shaped Sky-Island Animalium- "the highest paradise for animals"- the virginal Gao shrine priestess Tetomu and the surviving Power Animals have been searching for new modern warriors to counter the Orgu threat. Over the course of one year, five special people were plucked from their daily lives and chosen to secretly defend humanity from the darkness of its own heart- as the Hundred-Beast Taskforce GaoRanger!

Power Animals are no different from those found in the wild today. They have only lived far longer, and can regenerate themselves much faster thanks to the power of the Earth which has been absorbed into them over the centuries. This has increased their defense, intelligence, and size as well. They are also capable of merging their bodies together to form incredible humanoid-shaped warriors which stand several stories tall, and have weapons & special powers granted to each. Having retrieved an ancient-looking scroll from one of the Duke Orgu, the GaoRanger and Tetomu discover that it refers to another Power Animal; one of many who were lost over time and did not make it back to the Animalium. Following clues from the fragmented scroll, Tetomu left the safety of her home in Gao Rock for the first time in her very long life, and searched for the Gao Elephant. Shortly after she was kidnapped by Tire Orgu, Gao Eagle freed her, and she was able to reveal the location of the Power Animal. Giving the new Gao Jewel to Gao White, she used her Jūōken dagger to summon the anxious, but dormant Gao Elephant from inside a mountain. Dressed in metallic sky blue and gold, Gao Elephant has a powerful trunk, golden sharp tusks, and a large body which can trip up an Orgu giant. 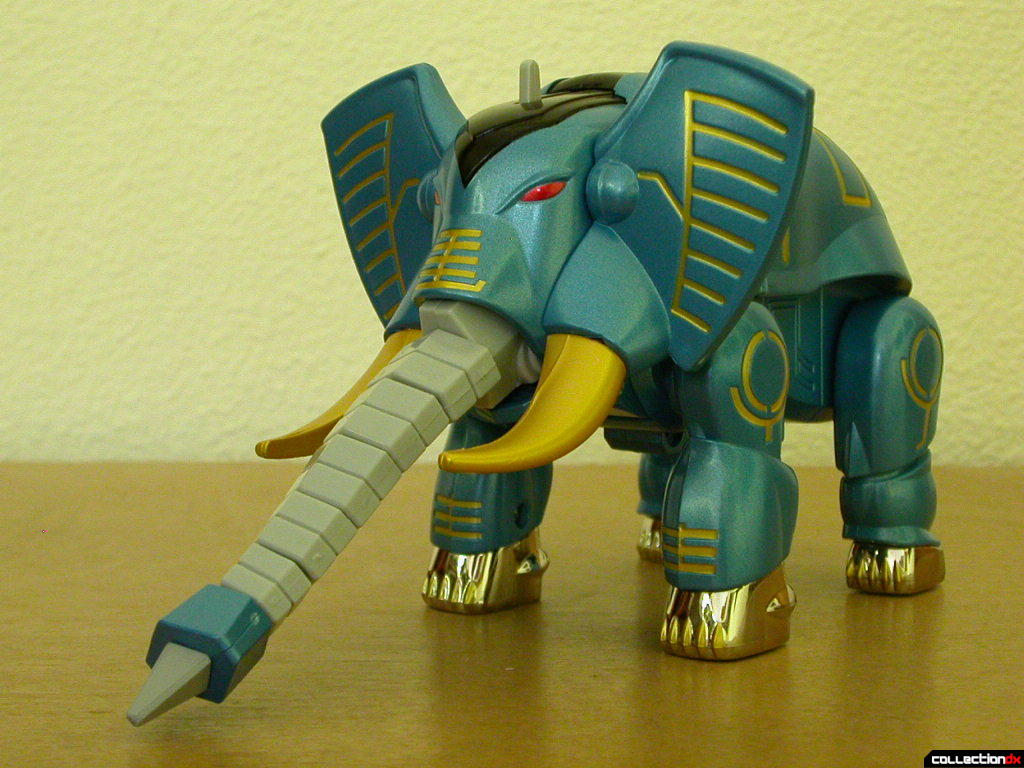 Gao Elephant (back) follows a similar style of design with the previous DX Hyakujuu Gattai Gao King. Its light gray trunk is designed like an accordion- with several correspondingly smaller segments tied together on the inside via a hidden spring set-up. This permits it to swing in just about any direction. The fan-like ears and tusks on both sides are attached together on the inside. And then, when a small lever on top of the head moves back or forth, the ears & tusks swing forward & backward as well. Each leg is jointed where it connects to the body, but front ones free-rotate and the back ones snap every 45°. The long skinny tail and the mouth also have limited ranges of movement. 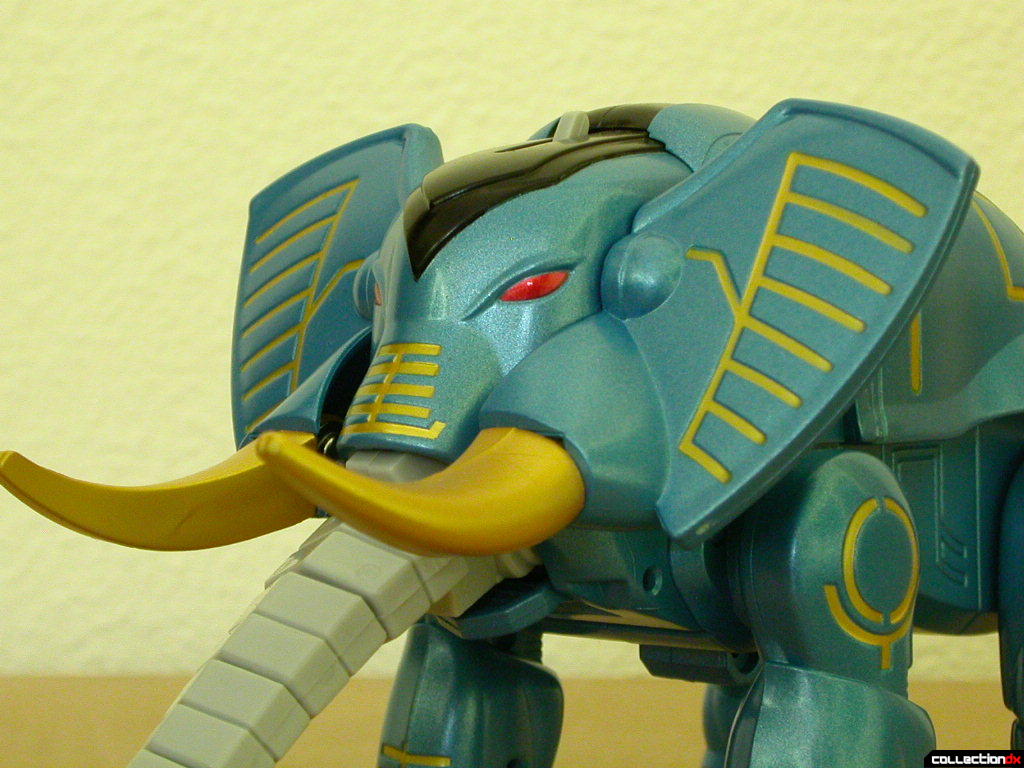 For those of you wondering what the differences are between PA-1 Gao Elephant from “Hyakujuu Sentai GaoRanger”, and its English-speaking counterpart, the Elephant Wild Zord from “Power Rangers Wild Force”, the difference is quite simple... It was never released. The Elephant Zord is the only Power Animal not to make the transition in its toy form to “PRWF” audiences. Why? Beats me; aside from some sort of dumb US toy regulation or marketing analysis. Was it released in the UK? I’m not sure, but I doubt it.

I’ll say right up front that I was not impressed with Gao Elephant even before I got him. The only reason I kept him was because I got him as a bonus from another collector, and I wanted to be able to go back and say, “See? I’ve got the whole series!” Even after seeing how it could combine with Gao King (see below), I wasn’t any more impressed. Having it in my hands didn’t change that. I think having an elephant in the Power Animals line is nice, but not the way it turned out. I won’t say I like it, but I won’t say don’t get it. It was well made just like the other Power Animals, and it fits in just as well with the design flow of the series.

(The Sword and Shield combination can only be used when Gao Shark and Gao Tiger are available to hold them, since PA-1 Gao Elephant is only designed to fit onto those two.)

As Gao King was fighting the Tire Orgu, Gao White separated from the others to help Tetomu revive Gao Elephant. Once that was done, Gao White rejoined the others inside Gao King. Gao Elephant then charged at the Tire Orgu and tripped it. Using Gao Elephant’s Gao Jewel in her Jūōken, Gao White directed the returned Power Animal to combine with them to form Gao King Sword and Shield. After the Tire Orgu was defeated, Gao Elephant returned with the other Power Animals to dwell on the Animalium. Orgu weapons prove to be useless against the thick wide shield on the left arm, and they cannot fight against its long sword and its destructive Evil Crusher finisher. 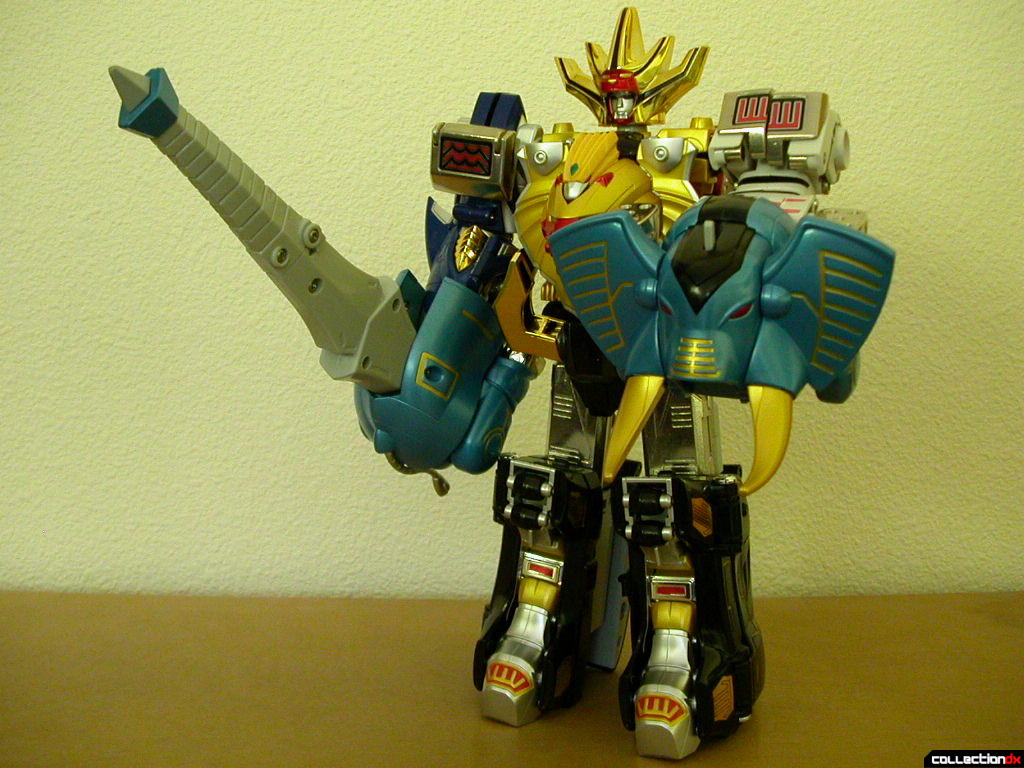 Gao King Sword and Shield is kinda odd looking for such an important first upgrade. It looks like Gao King is wearing a pair of metallic sky blue boxing gloves, and it is gripping a - a long, uh... thing in its right ‘glove’. The shield, okay - I get that. It’s an elephant. It’s big and wide, meaning it will block a lot. So why does it have to have a big hole right in the middle of it? Gao King needs no changes other than to rotate Gao Tiger’s head to fit correctly inside the Shield section. In addition to this, the two sections add a bit of weight to Gao King, so it becomes more front heavy, and won’t stand very well on carpet. The shoulder joints can’t keep up very well with it, and the elbows, well- bow a little. So, sometimes posing Gao King Sword and Shield becomes a little challenging. 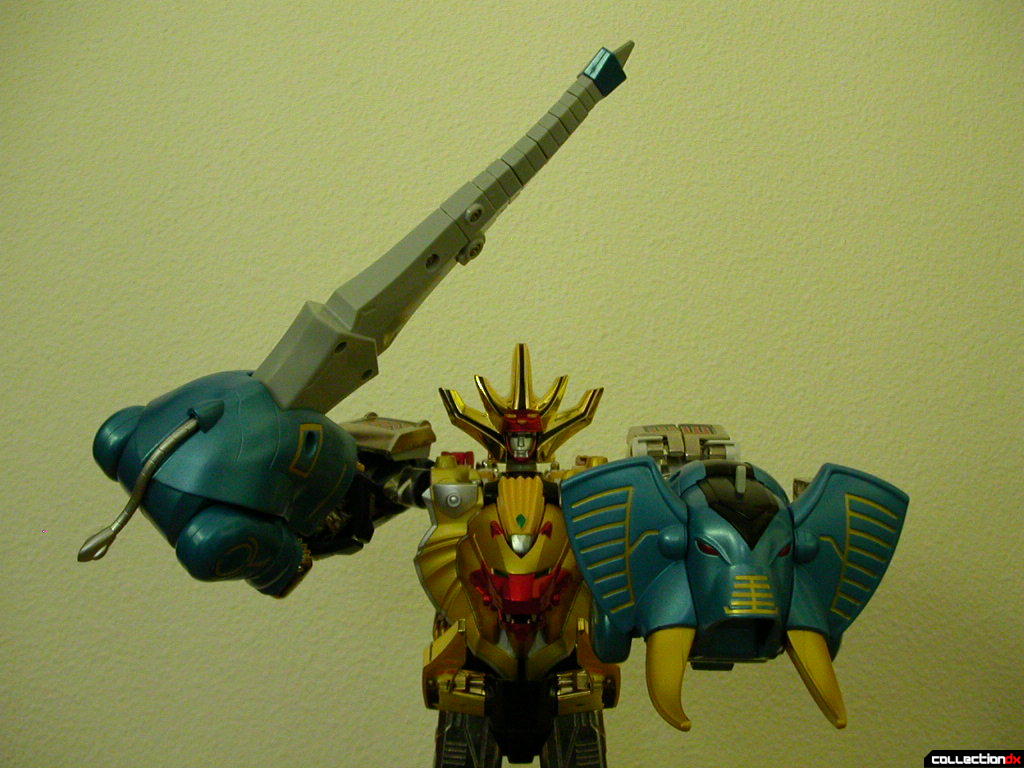 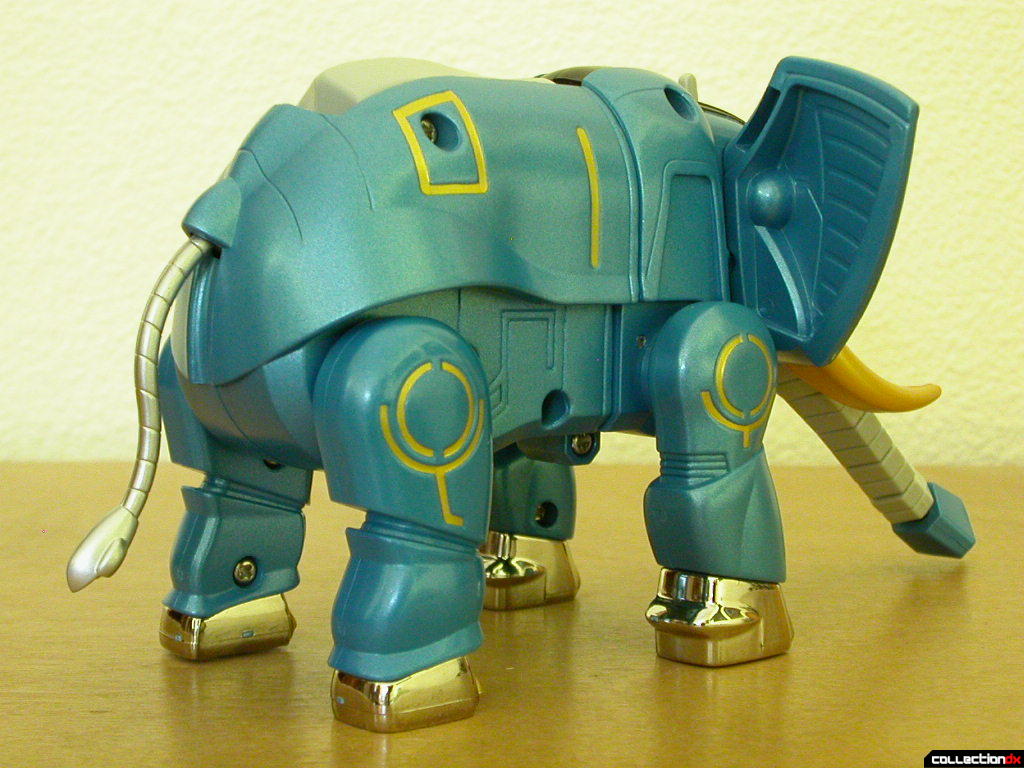 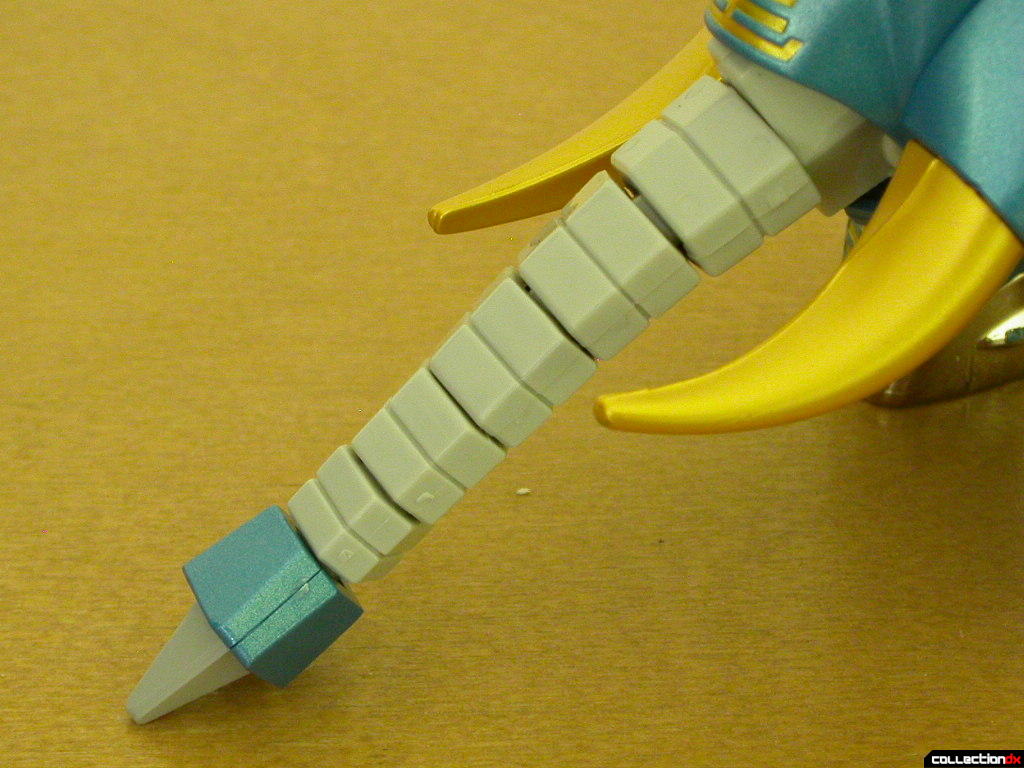 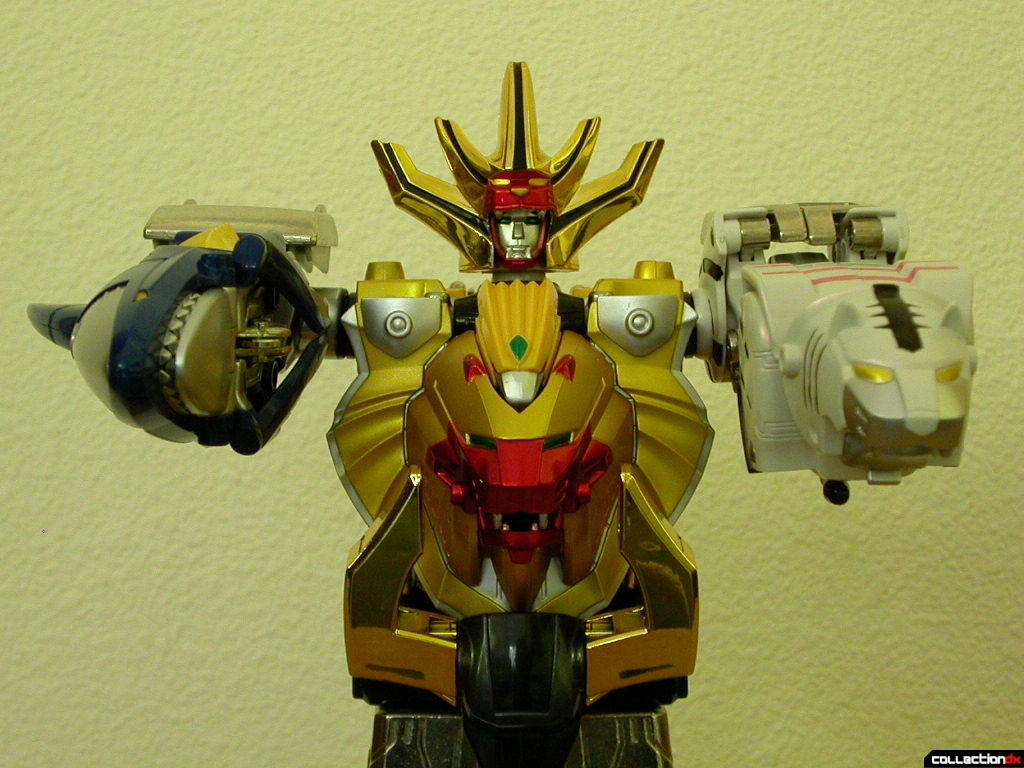 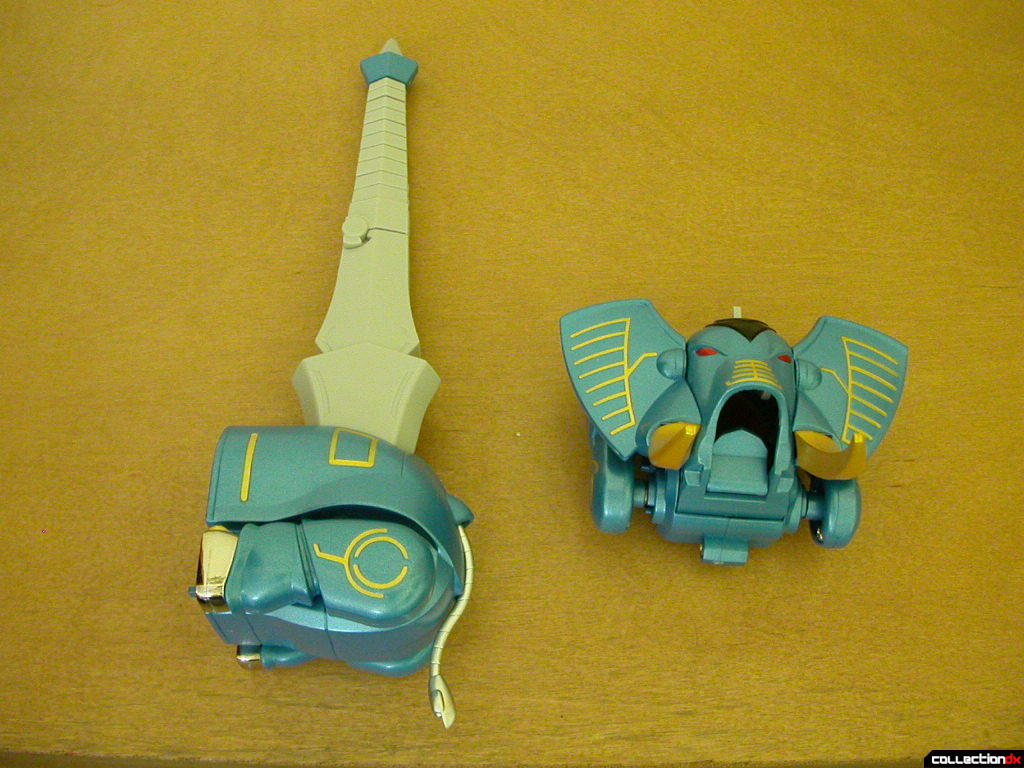 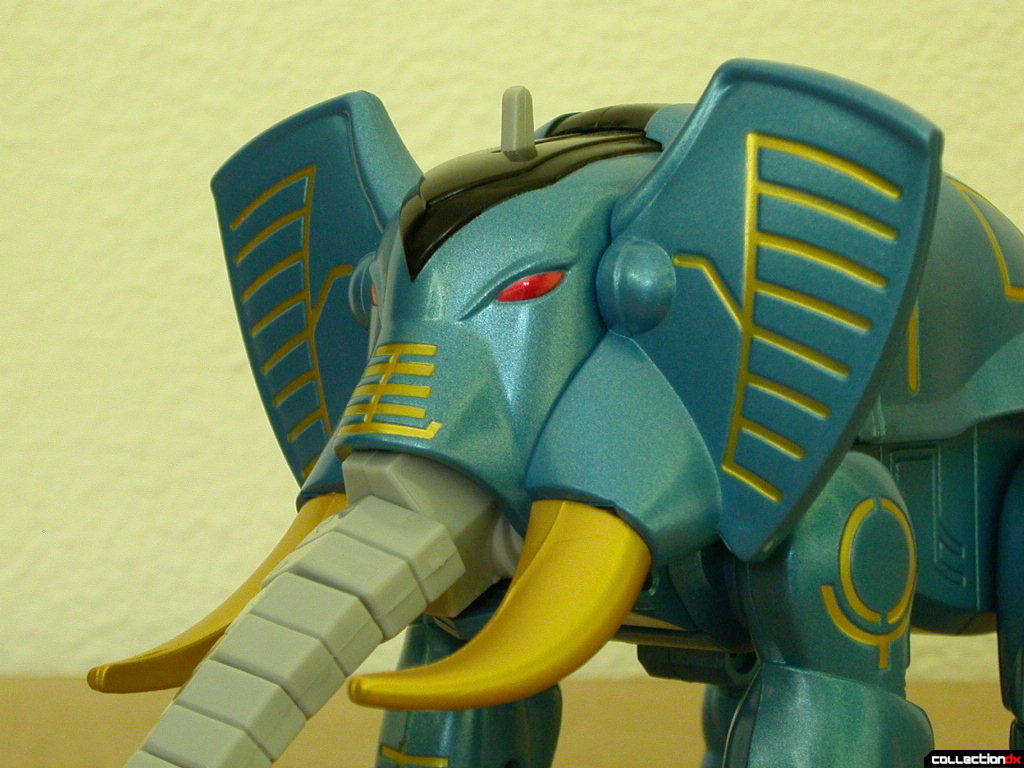 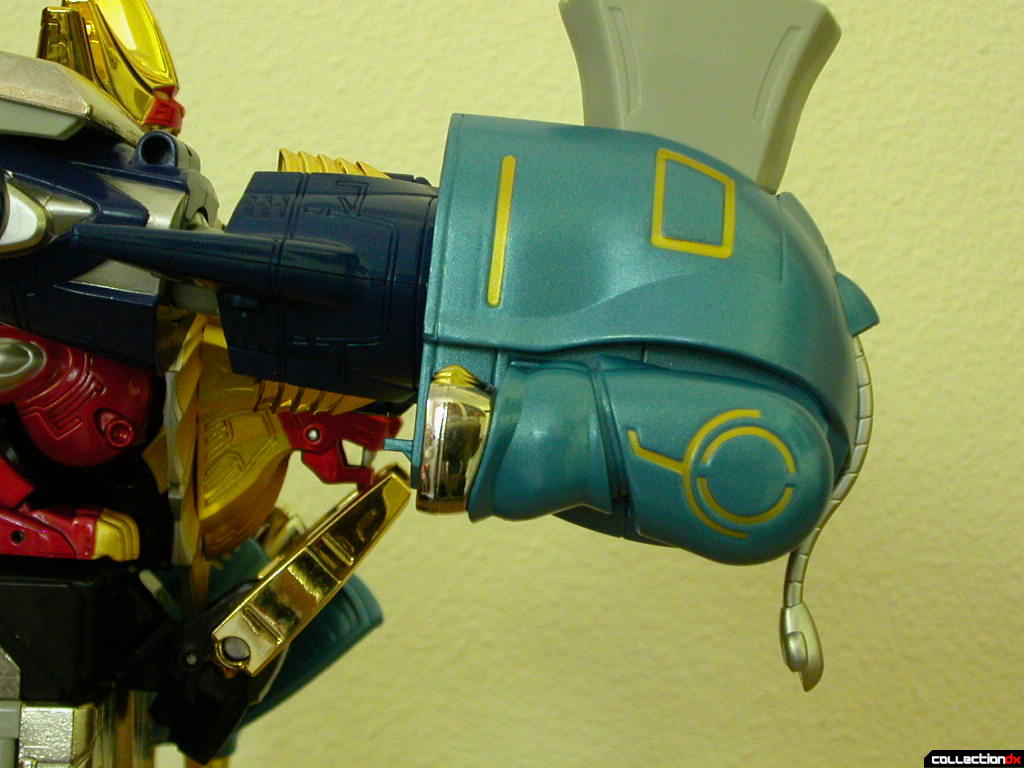 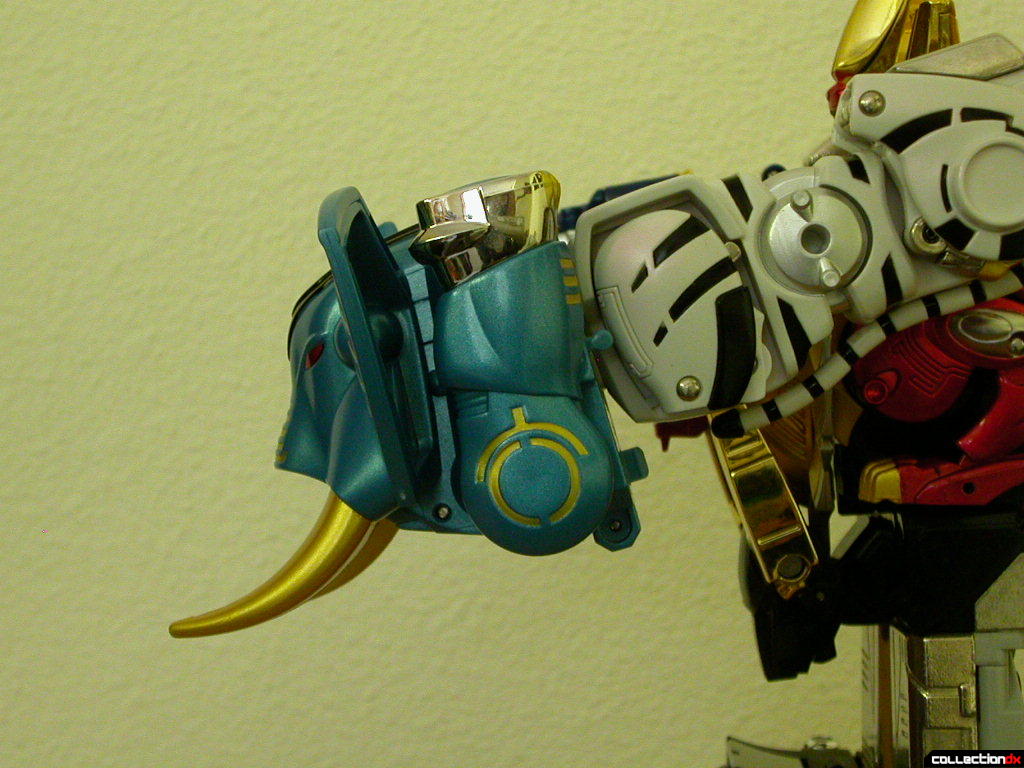 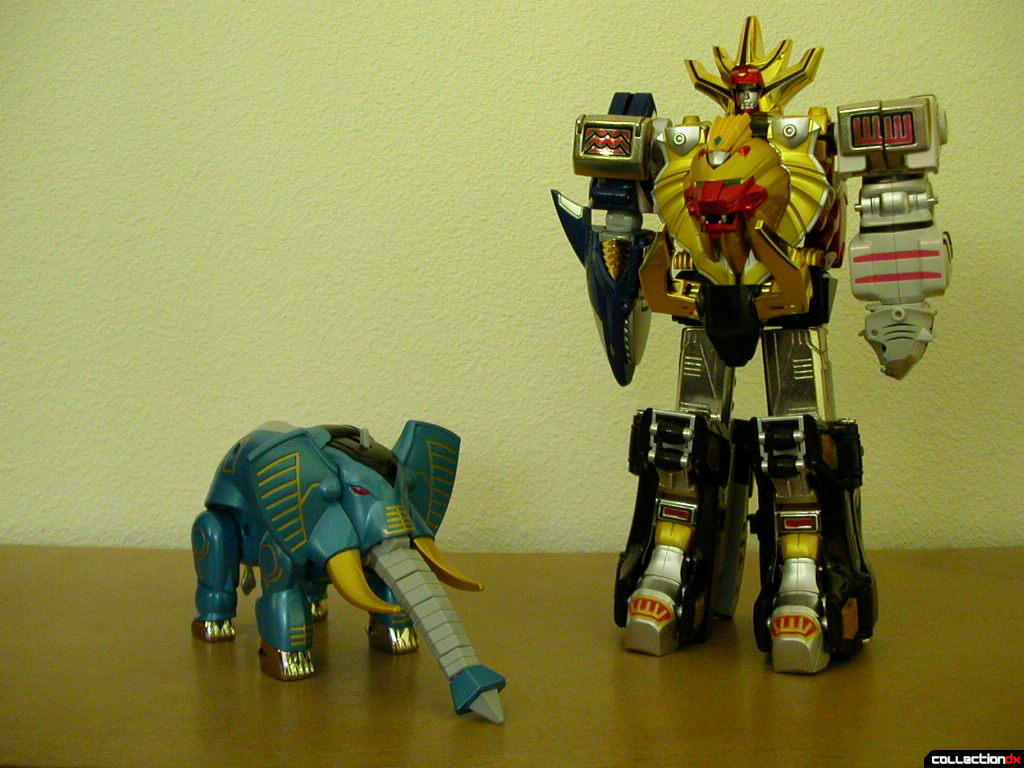 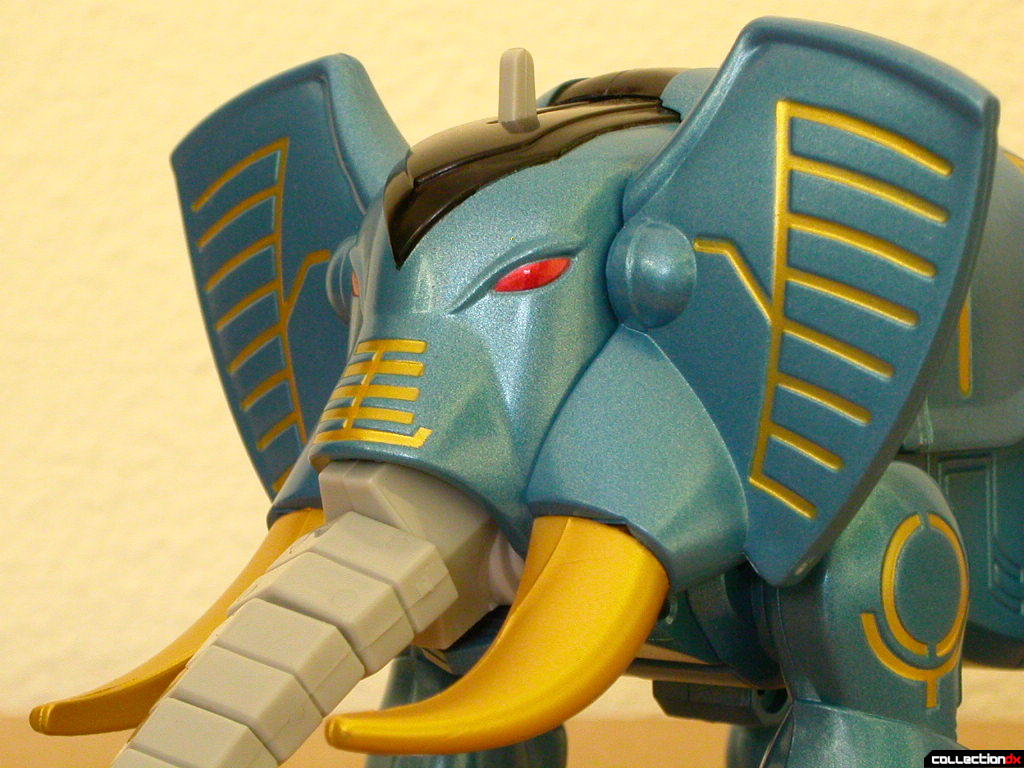 The Elephant was brought to the UK.

Can you please do a video review for wild force/gao zords/mechas?

love these reviews of yours, makes me feel excited on what new stuff you are going to review

2010 is my retro-review video catch-up year, so right now I'm eying videos for complete systems I have already reviewed- the Shinobi Machines from "Hurricanger", MagiMajin from "MagiRanger", and the Gougou Vehicles from "Boukenger".
But which one do I aim for next?

the same way i watch sentai, toku or anime, wait and see... it's up to you really

If I track down a HK release of this, is it the same as the original Jp release?

If my memory's correct, this WAS released in the U.K., but it looks to be an awesome toy

I dont think so. I remember when it was airing that it WASN'T getting a Uk release. The only one that was released was one that goes with the smaller non transforming WF Megazord.

Looks like they felt like homaging Daizyujin/the original Megazord when designing this. I mean, look at it!