Xenomorph provided for review by the ToySource. Click on the link to get your Xenomorph Lurker!

1979's Alien is one of my favorite movies of all time, but I didn't actually see it until I was a teenager. I saw its sequel, Aliens, however, when I was 7 years old. Yeah, it's more of an action movie than a horror movie, but it was a visceral experience that left an indelible mark on my young imagination. Ripley is awesome, but of course what is seared into everyone's brain is the xenomorphs, disgusting acid-drooling monsters from hellspace. Oh, and that android dude getting ripped in half. But mostly disgusting acid-drooling monsters from hellspace.

In 2013, Sega released a video game loosely based on the movie, Aliens: Colonial Marines. In 2015, newcomer Hiya Toys (you pronounce this just like "Hi-Ya!" you scream when you do a karate chop) released a series of 1/18 scale (think the little G.I. Joes or most Star Wars figures) Xenomorphs based on the aliens from Sega's game. A couple of action figure fans started Hi-Ya in order make nice, high quality 3.5" toys based on pop culture licenses. Hiya has more licensed toys in this scale in the works. 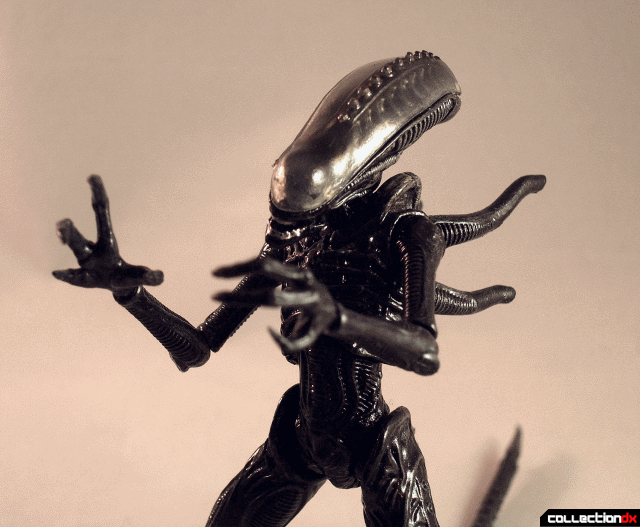 Right off the bat you may notice that even though this toy is based on the game based on the second movie, the Xenomorph Lurker is largely inspired by the "Big Chap", the monster from the original film. You can tell because this starbeast has a clear dome on its head which shows a hint of a humanoid skull in the front. I did mention that the first Alien movie is my favorite, right? This is right up my alley. 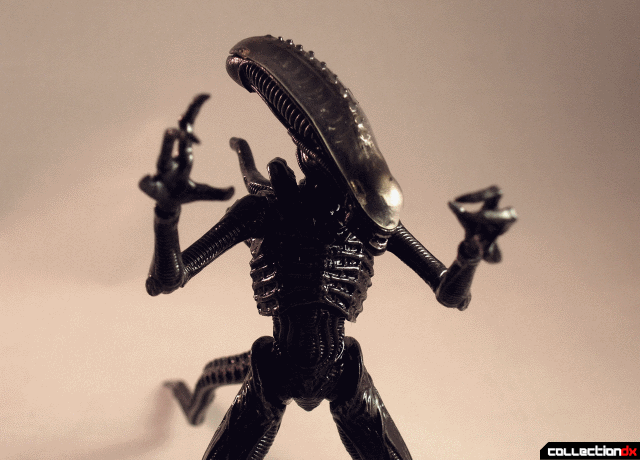 It is designed to be slightly larger than your average 3.5" action figure so it can loom over them the way a good Xenomorph should. Frankly, the level of detail is surprising for such a tiny toy. The sculpt is very nice and the glossy finish does an excellent job of approximating the slimy exoskeleton the creature. 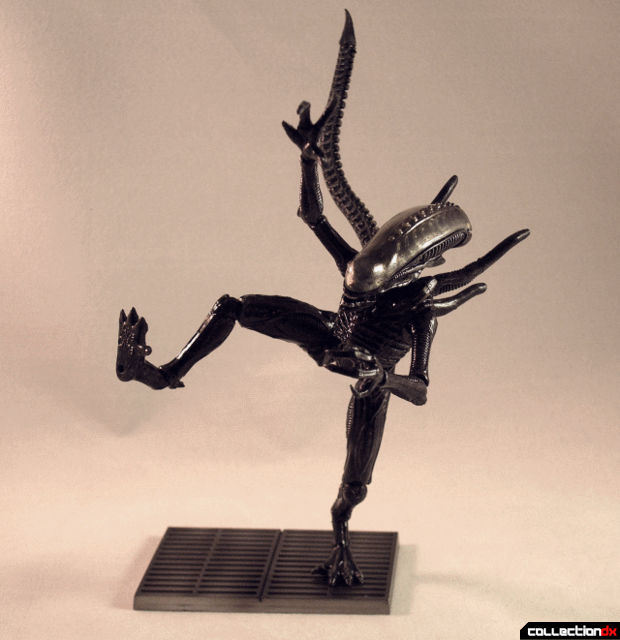 The Lurker comes with a stand resembling the kind of metal grate you see a lot inside of spaceships and colonies in the movies. It does a good job of anchoring your figure so you can take advantage of the articulation, which is quite good for such a small figure. I'm especially impressed by how well-hidden the joints are. The head is more posable than the S.H. MonsterArts "Big Chap", but the weird fins on its back lack the movement of the larger toy. That isn't a huge loss, but I'm slightly disappointed that the wrists can only swivel without any up or down motion. 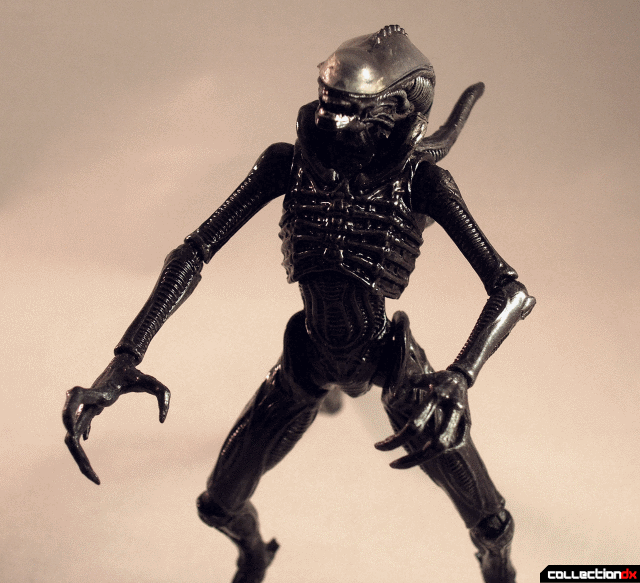 I do really appreciate the tail, though! Inside it is a long, flexible metal wire so you can twist it any way you want It's just like one of those old bendy toys! This is easily my favorite feature of Hiya's rendition of the Xenomorph. Not only is it valuable for articulation, you can also use it to support the body in lots of poses so you don't have to use the stand. Very nice. 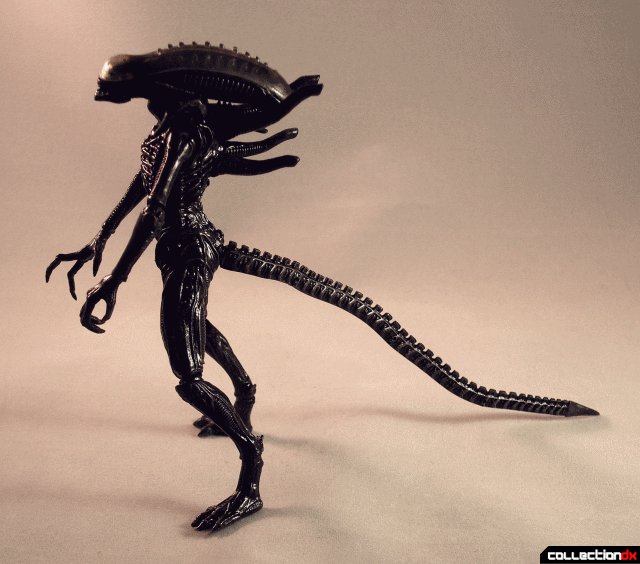 The toy isn't really that top heavy, despite the giant head and those pointy things on the back, but the tail compensates anyway. Note also the little spurs on the heels. They are a nice touch. 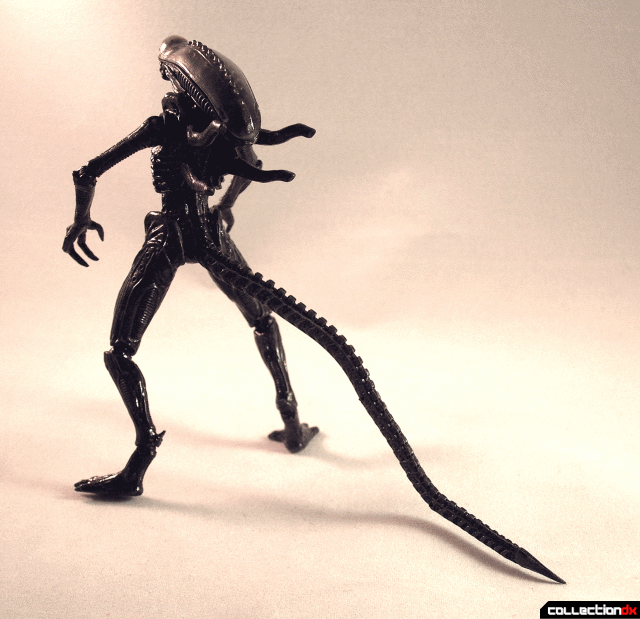 The joints are stiff but not too stiff. They stay right where you put them. You can even make your xenomorph do push-ups! Not that I think xenomorphs are super into calisthenics
. 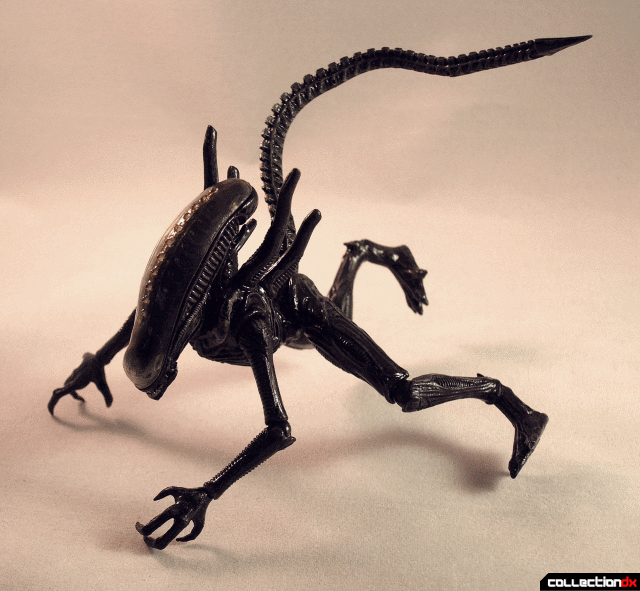 While I do really like the design of the head and the mouth looks good, with pretty decent paint on the teeth, I really wish there was an option for the tongue with the second mouth on it to stick out. The ReAction figure can do this. If it was unworkable to cram a tiny mechanism in there, another option would have been a swap out part or an alternate head, but it's not a huge loss. 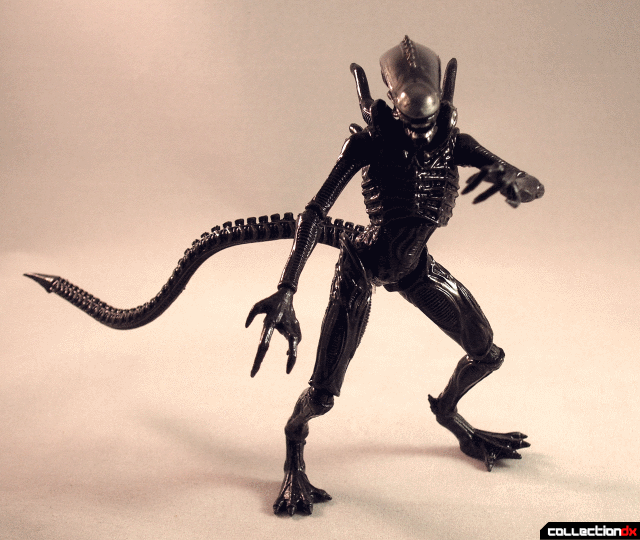 Did I mention the toy can easily balance on one leg if you use the stand? I'm really impressed with the great poses you can get out of this toy. 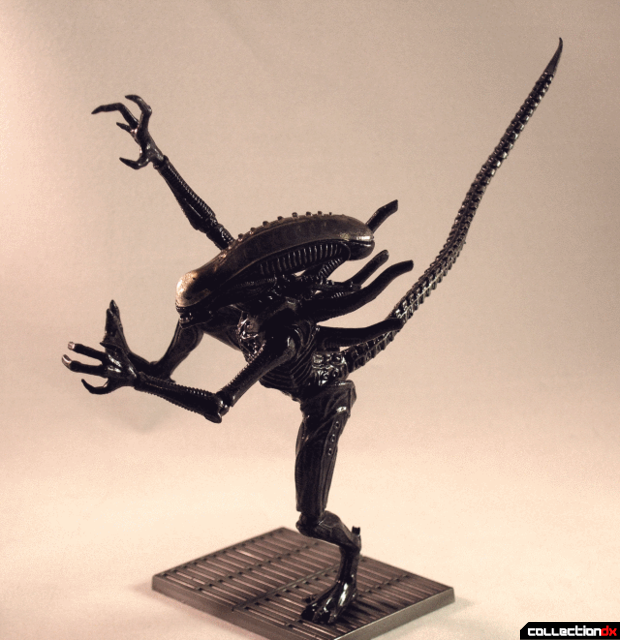 The Lurker also comes with a closed Xenomorph egg (sometimes called an "ovomorph". It's just a simple static plastic accessory to go with the alien action figure itself, but it has a nice slimy appearance and a good level of fidelity to the source material. 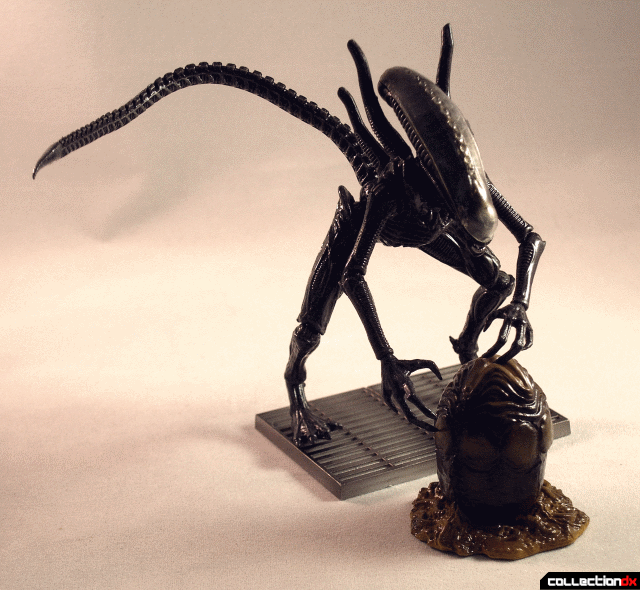 I'm not a huge fan of the base sculpted into the the egg itself, though. The greenish paint makes it appears to be a grassy floor at first glance, but a closer look reveals that it's kind of a wormy tendril covered thing. It seems off, but this is a minor nitpick. 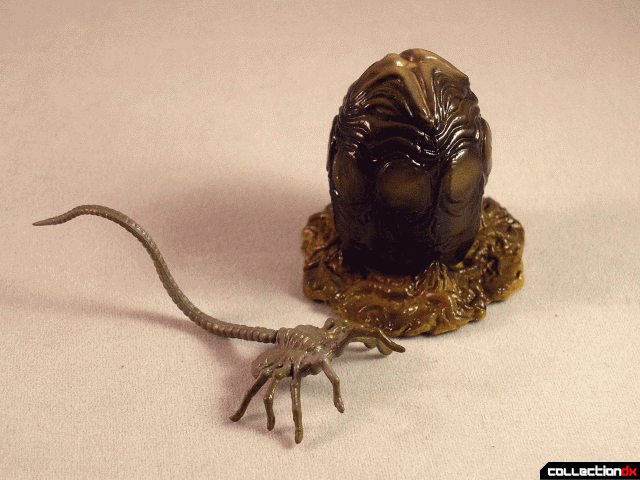 Also included with the Lurker is a facehugger accessory. It's a small static figure with no articulation at all, but it captures the look of the creature from the film, even if it's a little simple. 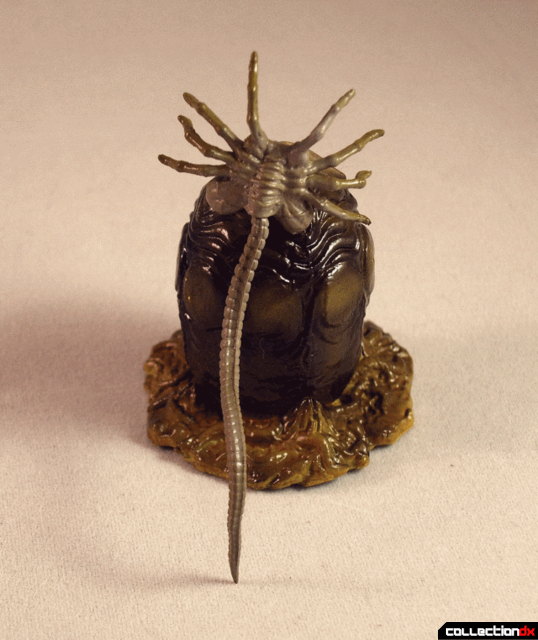 The design is good, including the nasty-looking knuckles and suggestive air sacs. in terms of coloring, it's pretty much a flat grayish color, but I don't think a complex paint scheme or anything more than a wash is really necessary. 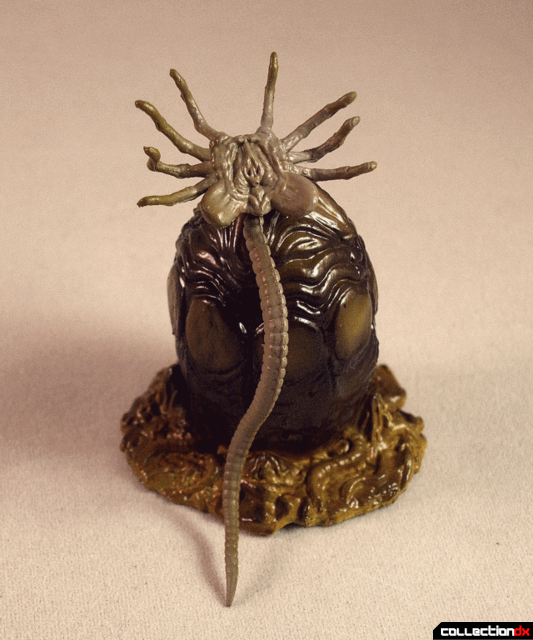 The underside of the facehugger has the gruesome detail you expect despite the small scale of the monster. My only complaint about the facehugger is that it doesn't have the bendy tail of the larger Lurker itself, but that's probably a budget thing. 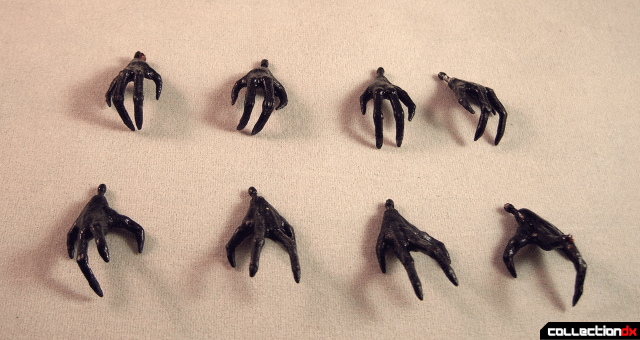 You also got a pretty good selection of alternate hands for your xenomorph, but I don't think they are that different from each other. Still, what else are you going to do with xenomorph hands? It's not like they ever play musical instruments, hold weapons, or shake hands! 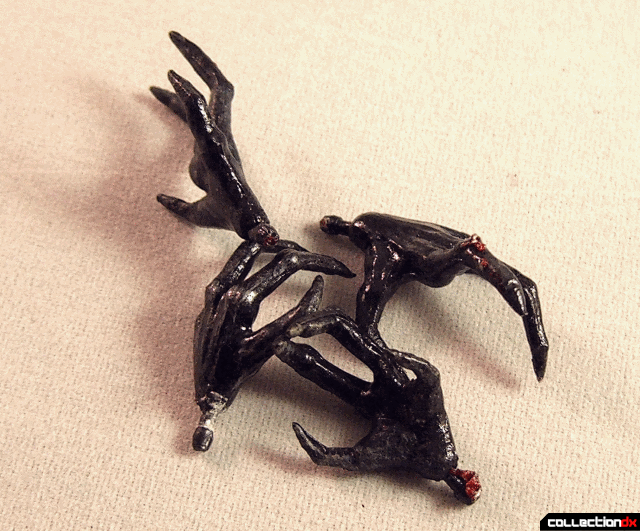 My copy of the Lurker had some quality control problems with the alternate hands. As you can see from the pictures, there's some weird red-colored chunky mold flash stuck to three of the hands that I couldn't get off. Maybe I will try to attack it with a hobby knife later, but it's kind of a pain. In fact, there's some of this red flash on the knuckle of one of them, so that one has an aesthetic blemish, too. One of the other hands also had a wrist that was missing paint and bent whenever I tried to put it into the socket and just would not work. All of the wrist pegs are a little soft and can be slightly difficult to insert, but this one was far worse. Hopefully I just got unlucky and this is a problem most won't experience. It seems like the Boiler and Soldier reviewed by chachipower did not have these sorts of issues. 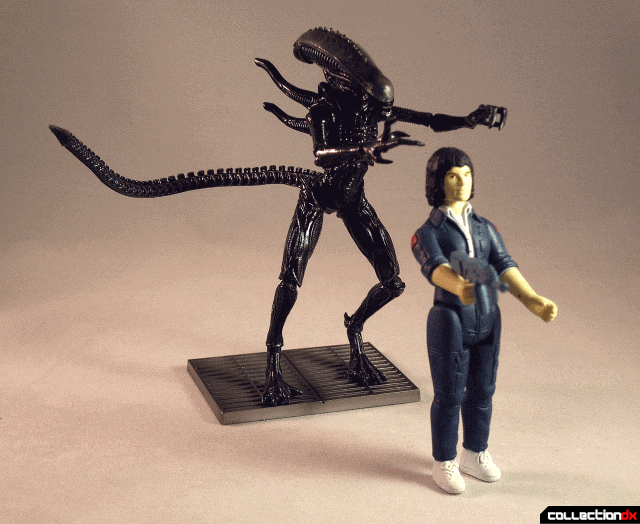 While you can certainly sic your Lurker on your G.I. Joes, Micros, or even Robotech figures, I really recommend the Super 7/Funko Alien ReAction figures. It's true that the ReAction figures do have an Alien figure, but the Hiya Lurker has 35 years of toy technology on it. The human figures still go well with the Lurker, nonetheless.

Quality control issues and minor quibbles aside, this is a really nice little action figure. It's perfect to make your galaxy a long time ago and far, far away a place no one can hear you scream.

Xenomorph provided for review by the ToySource. Click on the link to get your Xenomorph Lurker!