I still remember fondly getting the Lego Magazine every two months when I was a kid. Between Throwbots and Robo-Riders, I was pretty excited for the new and crazy things that were coming out of the Technic side of things. And then one faithful day, there was an exclusive offer that let you get the brand Bionicle figure of Tahu (and some other short guy) way before retail release. I rarely ever actually ordered anything from the catalogs, but this was the one thing I asked my mom if she could order it for me. Surprisingly enough, she said yes.

What followed was a toyline that I followed pretty much through most of my teenage years. I was obsessed with Bionicle. Between it's robotic aesthetic, awesome builds, and always expanding storyline. I even watched the kind of crappy movie, and love it! But after I reached high school, my interested teetered and things like Chogokins and Revoltechs held my attention instead.

So skip forward a few years where I'm an adult and have since realized that Lego freaking rocks, and right on cue, Bionicle has come back in 2015! When we first got the leaked rumors of everyone's favorite Toa returning, I didn't really care much. But seeing them on shelves was a different story and things went embarrassingly to say the least.

And here we have Tahu, the Toa of fire. The first thing I noticed about this guy was his size. Pretty huge, especially compared to some of the original figures I had as a kid. Even Z'gok here is impressed by this constructed bot. 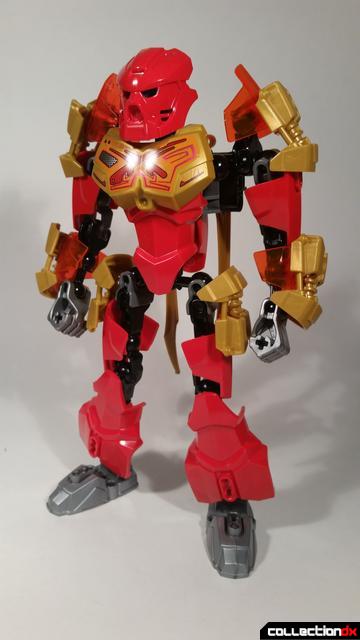 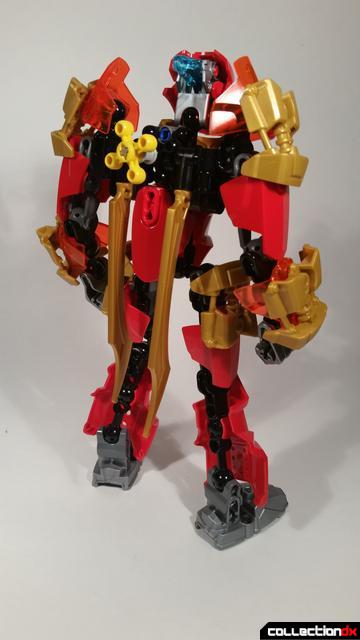 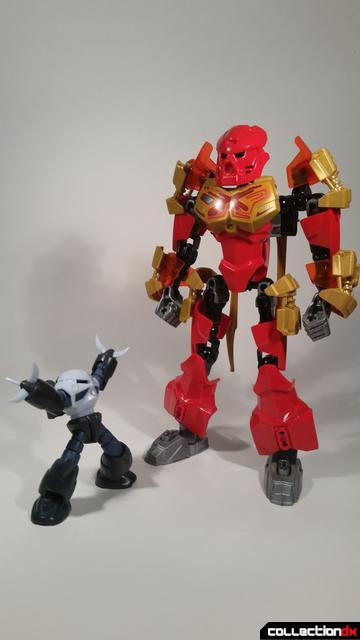 The head is an absolute throwback to the original Tahu toy, and I love it. It looks aggressive, angry, and a little bit like a Stormtrooper helmet if you ask me. 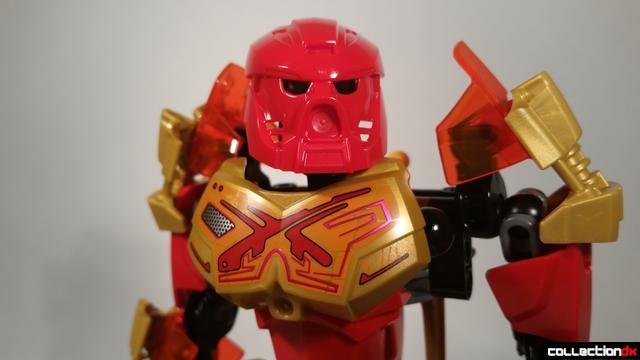 Now it's been a few years since I've handled Bionicle toys, but man the articulation is fantastic on this guy. Mostly in that he has knees and elbows now. Between that and his construction he can stand on one leg, strike a poke, and even do squats pretty well! 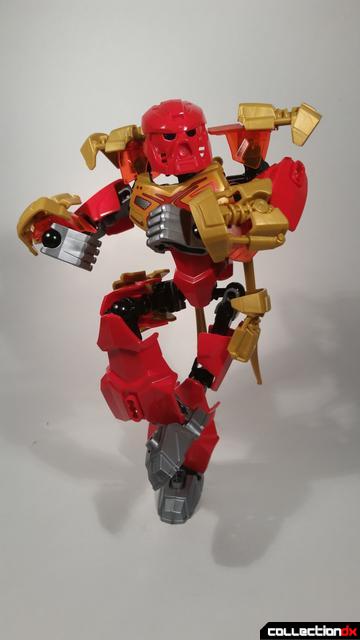 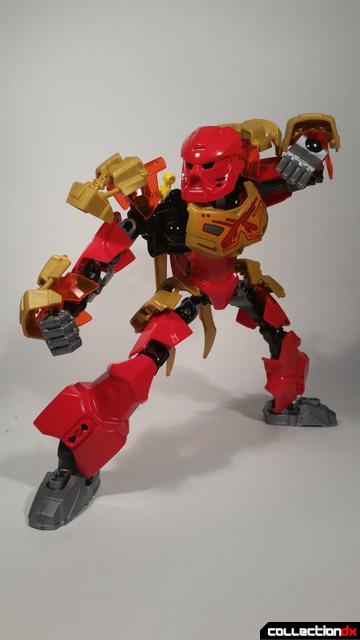 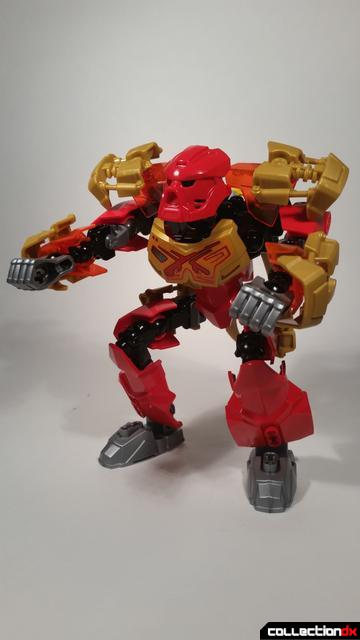 There's a few action features on this guy. The first that I noticed in particular was how the masks are now attached. They clip on from the side, and if you hit the clear plastic eye piece from behind, it knocks off their mask as if they've been attacked by a vicious monster. I think it's a lot of fun. 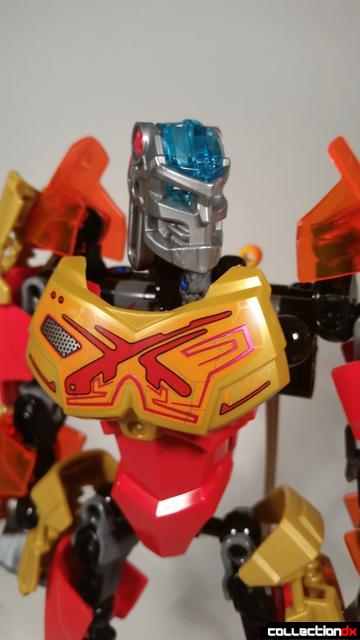 In addition to that, this figure has another throwback to the original Bionicle figures in that it has geared arms which allow you to swing them up and down to slash with their weapons. Now back in the day, this was awesome, but there was also no friction so the arm would swing freely. Now, this gimmick has been redesigned so that the gears will hold any pose they need to. 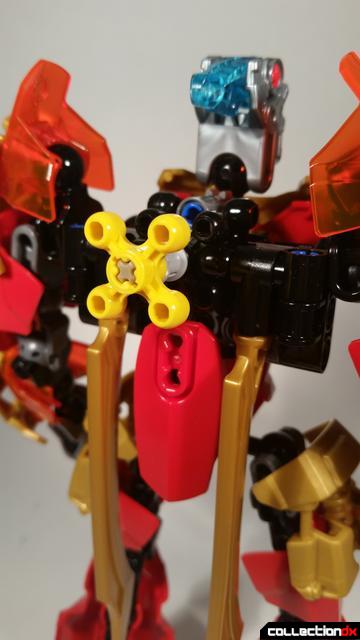 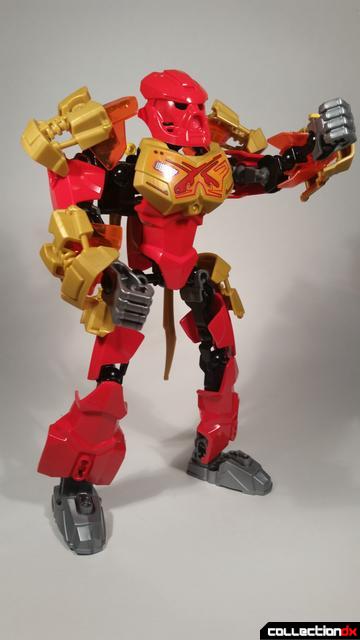 It's a little hard to convey in a static image, but I swear the arms are moving. 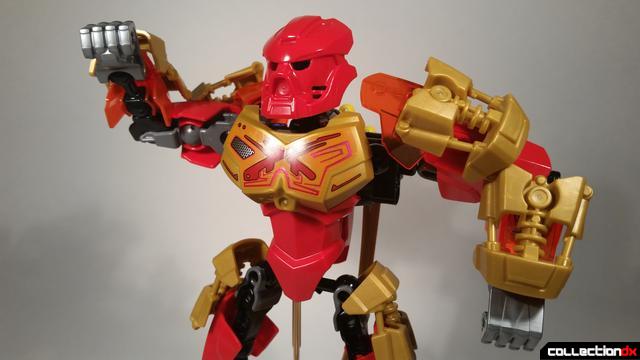 The original Tahu came with one flaming sword, but this new version is loaded with weaponry. On his back he has two smaller swords which can flip out. They look like decent little weapons, but definitely a little puny. 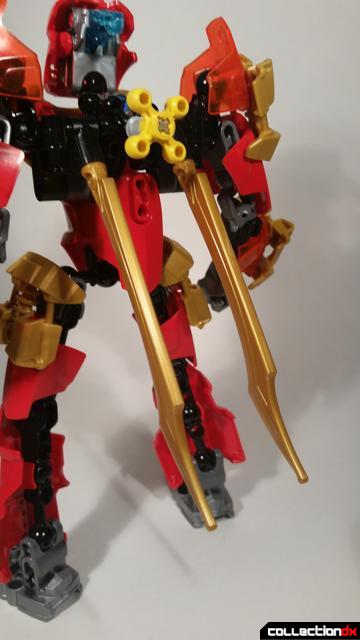 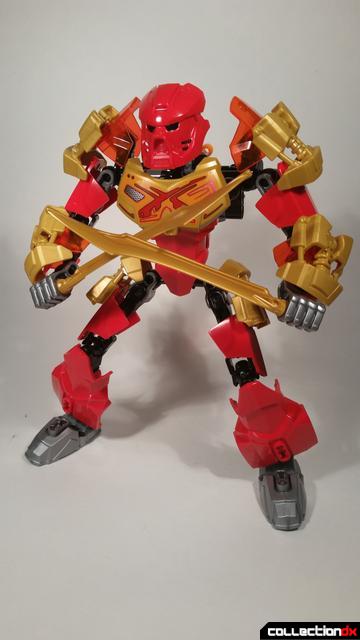 But that's okay, because Tahu also comes with these MASSIVE FIRE SWORDS that look like they could straight up cleave evil in two. They look huge, unwieldy, and perfect for a hothead like Tahu. 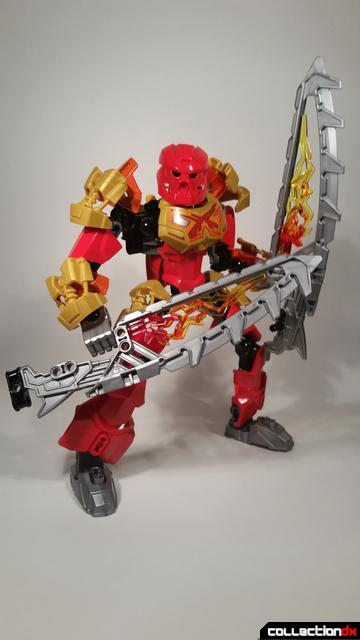 My preferred display option is to have Tahu's two smaller swords out like decorative blades and then have him swinging his fire sword around like a proper badass. 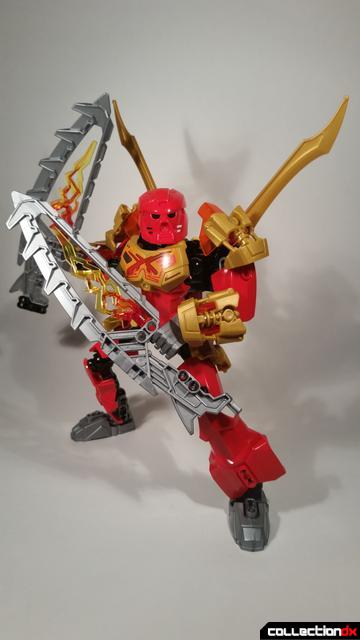 That's not all the swords do though. With the help of a few pieces, Tahu's swords can combine into a surfboard. Because when he's not smiting evil, he likes surfing on lava. 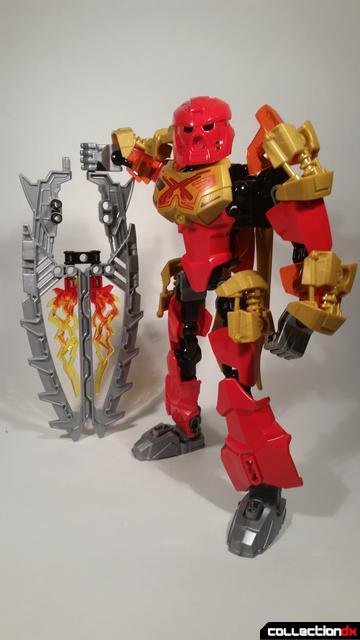 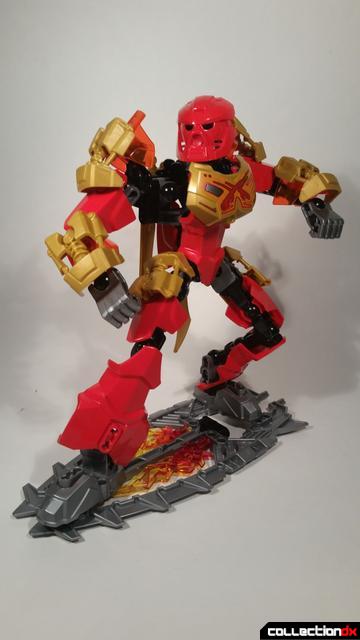 Also included is a golden mask, which gives Tahu the extra power that a hero needs. It's just a straight remold of his regular mask, but goes quite well with the additional gold armor that covers his body. 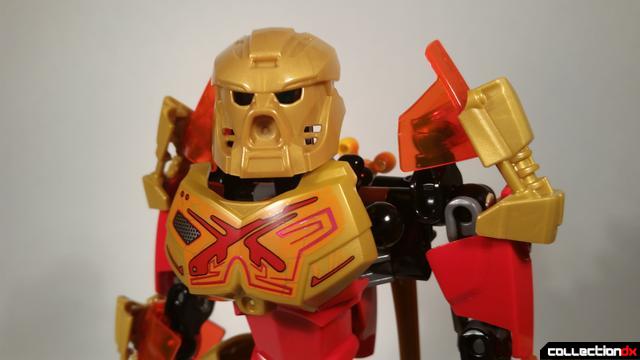 The final accessory in this set is a Skull Spider. These guys are the cannon fodder bad guy from the series so far. One is included in almost every set. All of the legs are on swivels that leg them creep and crawl around. 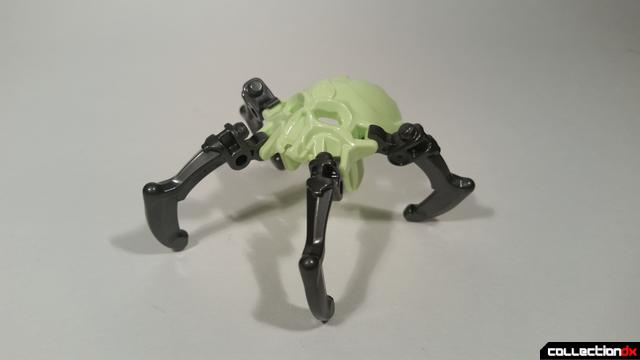 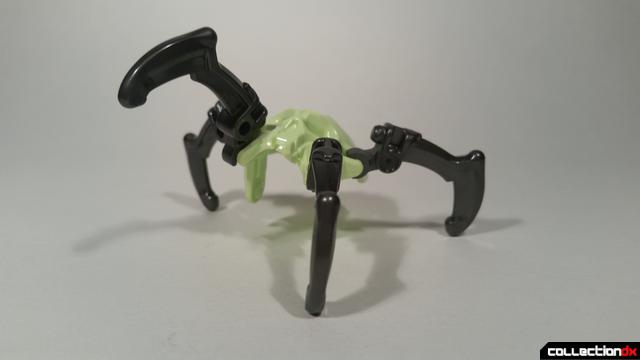 They also double as masks to represent being taken over by the powers of evil. That's another just fun little feature. 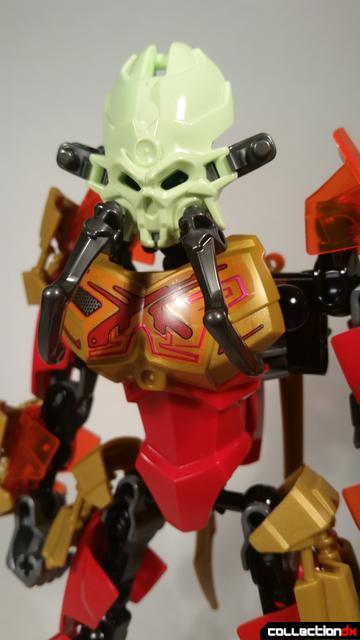 I was pretty bummed out to here Bionicle died back when I was in college. So when Hero Factory first came out, I bought one of the first figures for nostalgia's sake. It did absolutely nothing for me and I ended up not paying much mind to the entire toyline. This new Bionicle line though, does everything that I wish Hero Factory did. It's a way more complex build than the original, but is also much more playable. You have loads of options for weapons and display, and I just never want to put this thing down. Tahu is great and if you're a fan of the original Bionicle I'd say check it out. And even if you haven't ever gotten into the toyline, pick out a guy that looks neat and try it out. They're really fun. 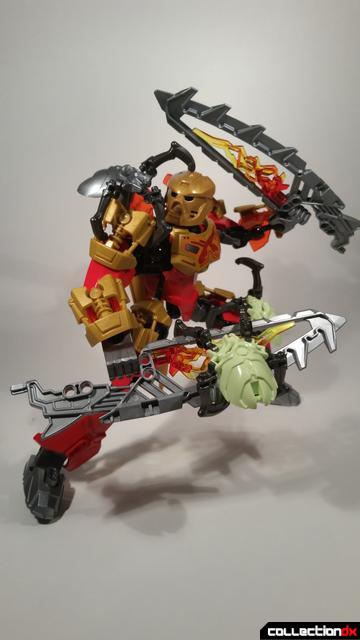 That is pretty rad looking. Might need to pass through the local toy stores and check this out.

Tahu means tofu in my country,, so it kinda funny name for such a badass design

This new Bionicle line though, does everything that I wish Hero Factory did.

Yep, it does, and that's exactly why I'm paying it no attention. BIONICLE 2015 may be a reboot, and it may gain advantage from the lessons learned in the Hero Factory line, but to me this is not the old BIONICLE I remember.

Up front, I lost interest in BIONICLE after the first year in Metru Nui (2004-ish) because it was becoming repetitive in mass-produced villains that all looked and acted the same supported by a few larger main baddies. (The Bohrok as a unique swarm-race was a great idea, but mass-produced swarms and baddies year-after-year ruined it and the Bohrok got lost in the gimmick they started.)
The other thing BIONICLE lost was the 'living legends'/ignorant paradise islanders-aspect, which I thought was interesting. Keeping [The] Makuta and Mata Nui as faceless stone figures of mythology standing as gods of that Universe suited me fine, but when they both began to take an active physical role, they lost their stature as gods and became just over-powered characters outshining the importance of the Toa in the storyline.
At first, I thought Metru Nui was an interesting idea- to say the Matoran had a lost past intrigued me, but as time went on and the direction of the story played out, I found BIONICLE shifting away from the uniqueness it had brought early on that I enjoyed so much, and just became a competitor to Power Rangers and Transformers.

BIONICLE 2015 is starting out right where I left it years ago- with a swarm of similar-looking critters. I would rather something like the infected Rahi come back to terrorize and plague the innocent Matoran villagers- an engaging gimmick of different-looking animals corrupted by the mystical Makuta, with the added bonus of having two in each boxed set to encourage mini-games with builders outside of the storyline. And also, whatever happened to bonus alternative models that you could access by going to the website, or a separate boxed set of common un-infected Rahi mini-models?

EDIT: I wish Lego would publish the first online BIONICLE flash game, where you played as the then-unnamed Chronicler traveling across Mata Nui as the Toa made landfall and engaged first the infected Rahi and then the shapeless Makuta. I still have the cutscenes, and I wish I could play the game again, although I do still have the three Desktop toys they made; simple but fun.