The Pink Ranger was brought to you by Bluefin Tamashii Nations!

You can check out the video review here!

This is another character who basically needs no introduction. The Pink Ranger is rendered beautifully here! The paint details and sculpt are fantastic as always! Bandai always takes great care with this toyline and that's why I love them! 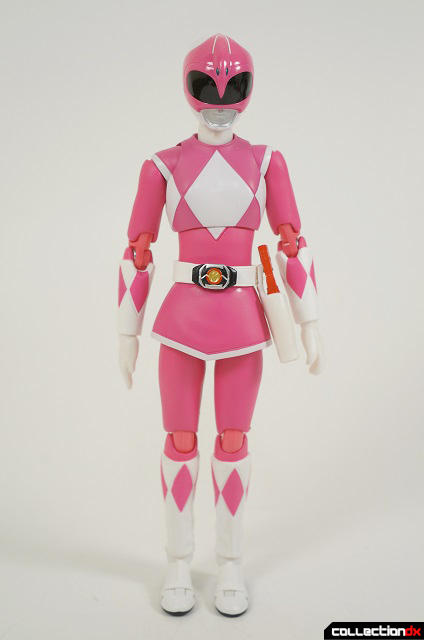 One thing I should mention are the way the joints look in the photos. It looks like the elbows and knees are a different color, but I think that's due to the lighting in my "photo studio". In hand, they are the same exact color. I think it's the way the different plastics react to light. Oh well, I'm sorry. 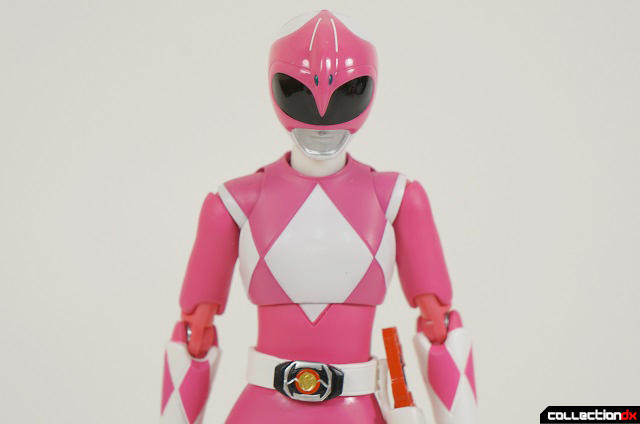 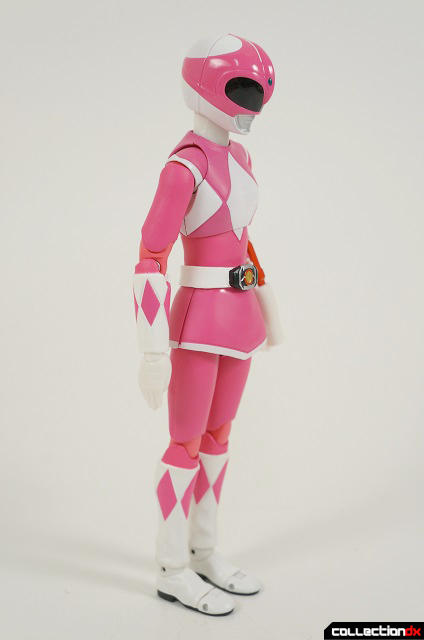 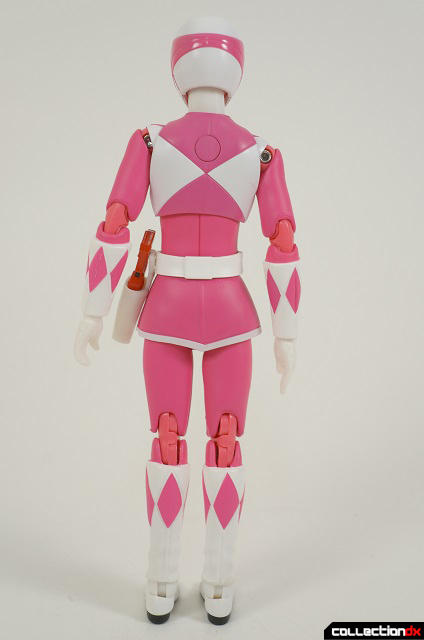 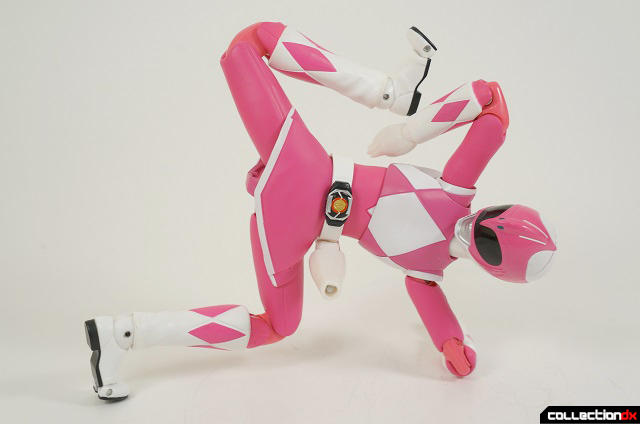 The articulation here is the exact same as the other previous Mighty Morphin Power Rangers S.H. Figuarts, albeit with a skirt. Most of the articulation is completely unhindered, except for the hips. The plastic skirt kind of gets in the way of a lot of dynamic poses. In previous female Figuarts releases, there are two types of skirts included, a dress skirt and a segmented posing skirt. For some reason, Bandai only includes the dress skirt here. It doesn't completely ruin the package, but I would have liked to have a choice in what kind of skirt we got. 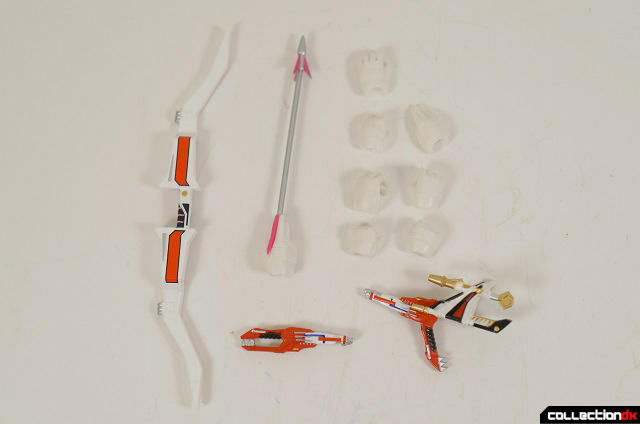 Despite the lack of an additional skirt, the other accessories are pretty great! There are four pairs of hands: fists, holding-things hands, a calm hand, 2 posing hands, and one hand with an arrow attached. Also included are the Power Bow, Blade Blaster (for the holster), and the Blade Blaster and Thunder Slinger in their combined form. I would have liked to have the Blade Blaster in gun and sword form like the Red Ranger, but I guess I can make due without them. Plus, I could just borrow them from one of the other MMPR figures so it isn't a complete loss. Still, it would have been nice for them to include those pieces. 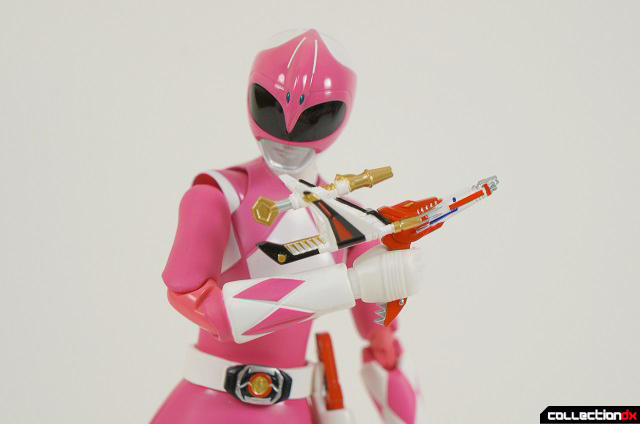 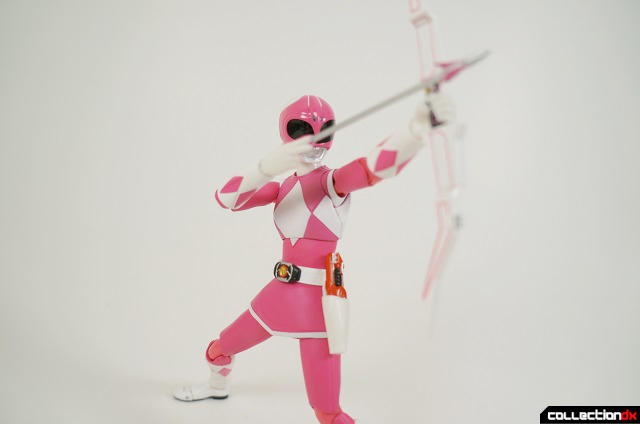 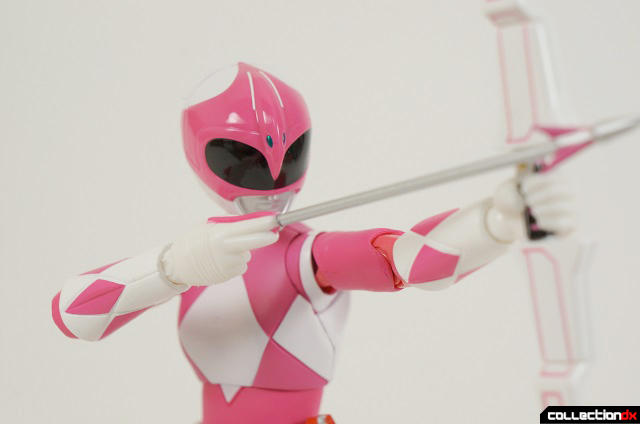 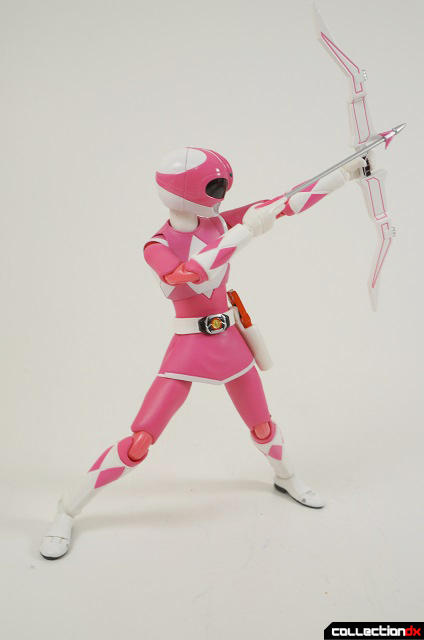 She still looks great with the other figures released in this line so far. 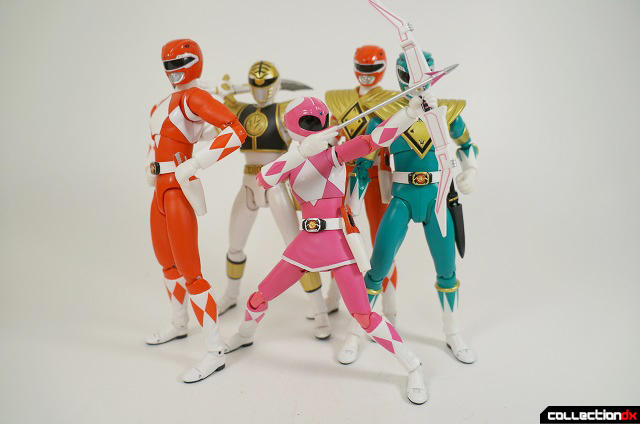 And no, I'm not going to photograph her with the White Ranger in a lovey dovey pose, you freaks! 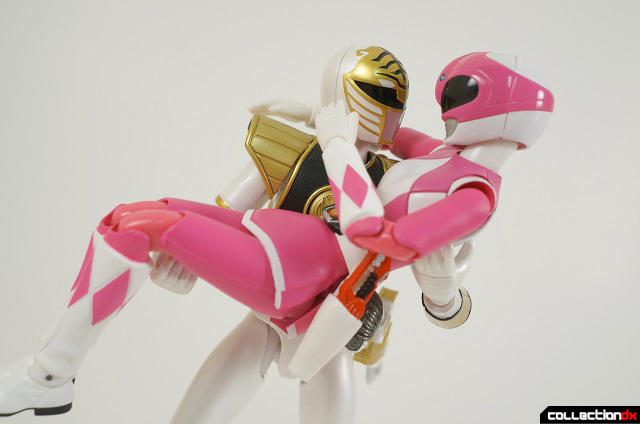 Overall, the Pink Ranger is a great figure despite its few faults, and is definitely worth your time. Even fans of Kyoryu Sentai Zyuranger would appreciate this release since the Japanese version of Pterra Ranger was a Web Exclusive, and therefore brings wallet PAIN. I highly recommend her for fans of Power Rangers, and is a must have if you plan on getting some of the others in this line. 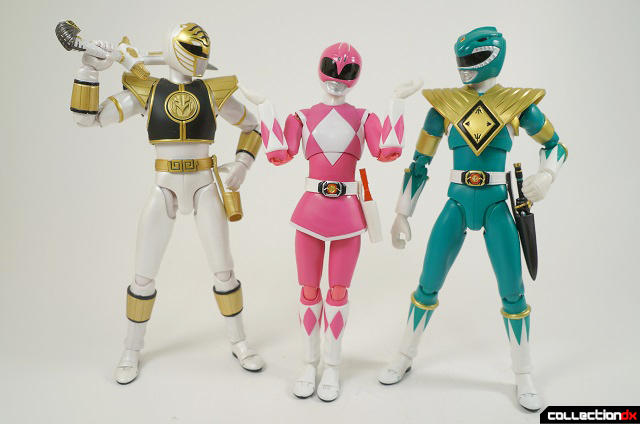 So I got my SH Figuarts Pink Ranger/Pteraranger from Power Rangers/Zyuranger. There's some truly bad paint matching. One leg is purple and one leg is pink. Anyone else have this problem? Should I ask for a replacement?

Yes, you should. I haven't seen anyone with that problem. Did you get the US release?

Yep, this is the US release in the Power Rangers box and everything.

Unless of course it was through Previews / Diamond Distributors (Comic Shop) Then you are @&$?ed.

Nah, it was from BBTS. Thanks for the advice!

Posted by Ginrai on 4 December, 2013 - 22:47
Joel makes everything alright an excellent choice

BBTS told me: "Thank you for contacting us regarding your recent order. I certainly apologize that the figure you received did not meet your expectations. We have reviewed an entire case of these figures and it does appear that the slight variations in paint color on different pieces of the figure, are consistent throughout this run. At this time if you would like to return the figure for a refund, we can certainly arrange that. An exchange would likely result in another figure with similar coloring issues."

Try getting the exchange anyway.

I am VERY glad to see she got a Figuarts release. Kim desperately needed the kind of articulation the line offers, because she's an archer. The previous action figures just can't do a great bow-drawing pose to save their life.