Disorder is Transformissions take on the Stunticon Wildrider and the first entry into the TFM-M combiner line. Disorder comes packaged in a heavy weight card board box with full color outer sleeve and foam cut interior. If you have ever bought any of Generation Toys releases, the box will be very familiar. Included in the box are the core figure, lazer pistol, and instructions. No combiner parts are included with this release. 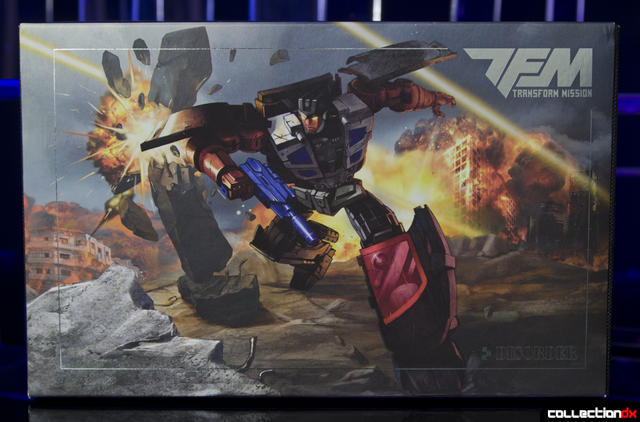 The back of the box leaves no question that Transformission and Generation toy are one in the same company. Thats good news seeing as GT is known for high quality releases. 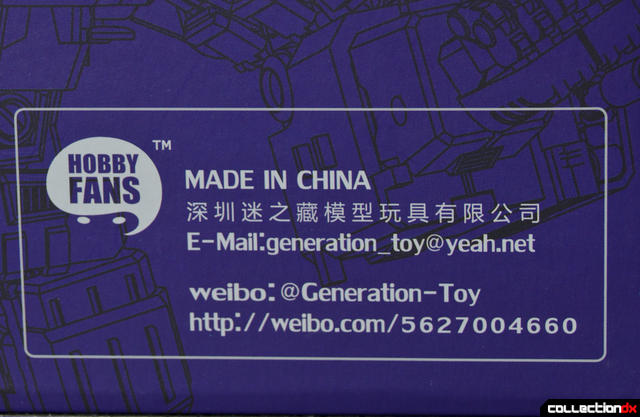 Disorder stands 6 1/2 inches tall from head to toe. Trying to reconcile scale between different transformers lines is a sure recipe for a head ache and hurt feelings. That said, Disorder is close enough to fit in with Mp figures if that is what you want him to do. 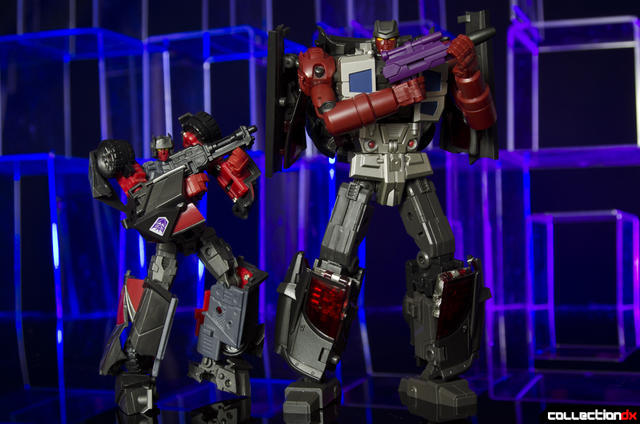 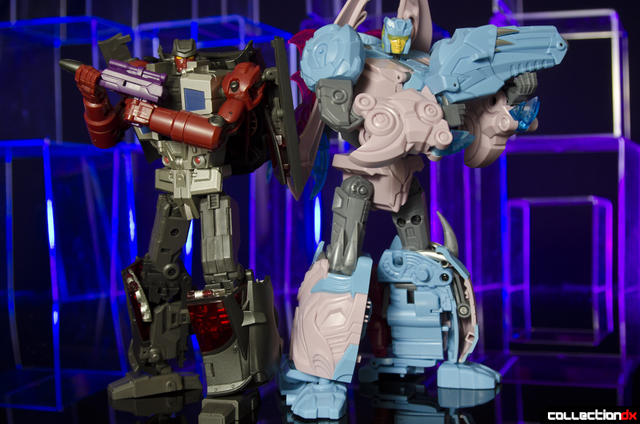 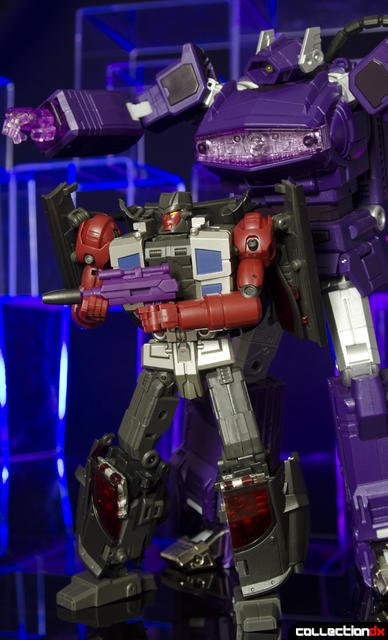 Disorders robot mode is clean, and well designed. My copy has no loose joints or QC issues that I can find. All of the paint apps. are sharp and clean. 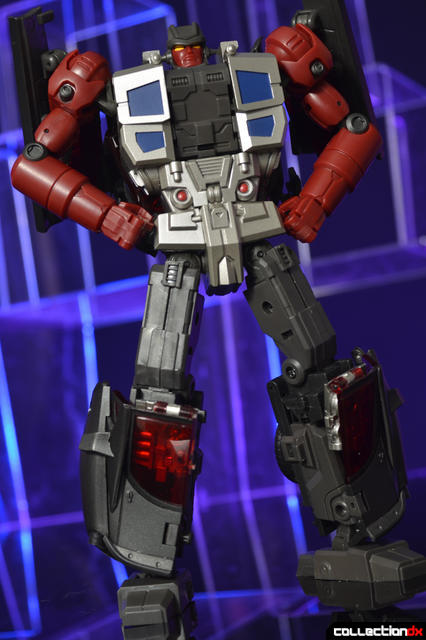 Initially, I thought I would dislike the doors hanging off of his arms, but I quickly warmed up to them. They connect to the arm via two joints, a ball joint, and hinge wich allows them to move freely and stay out of the way in any pose. Additionally, they can be opened up and used as a makeshift shield. 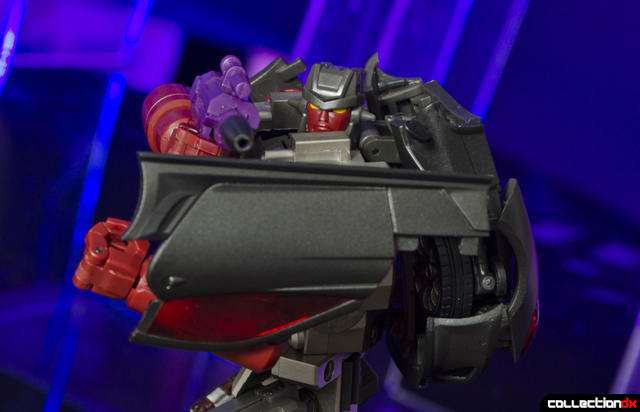 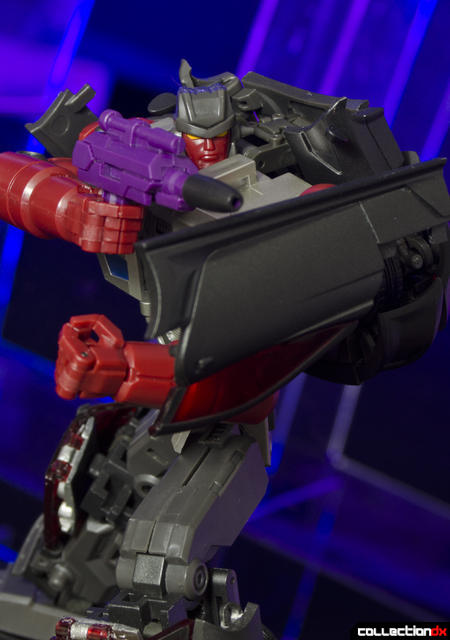 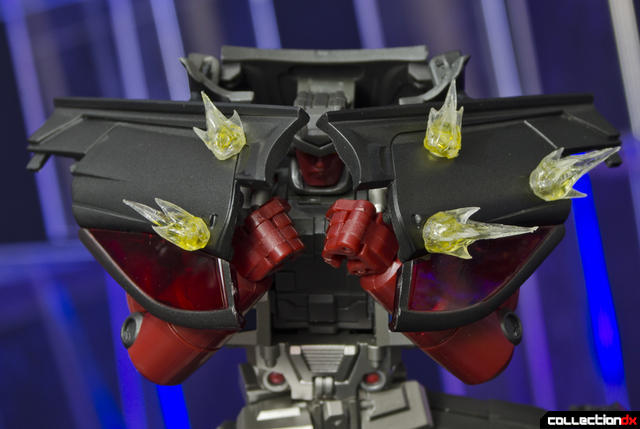 Robot mode has a lot of great details and the clear parts that make up the windows are used to great effect. 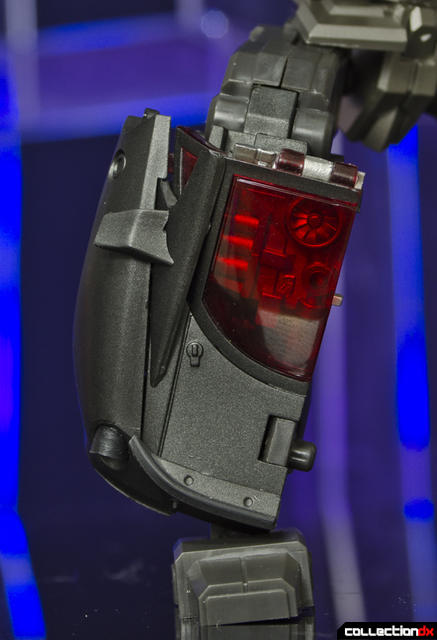 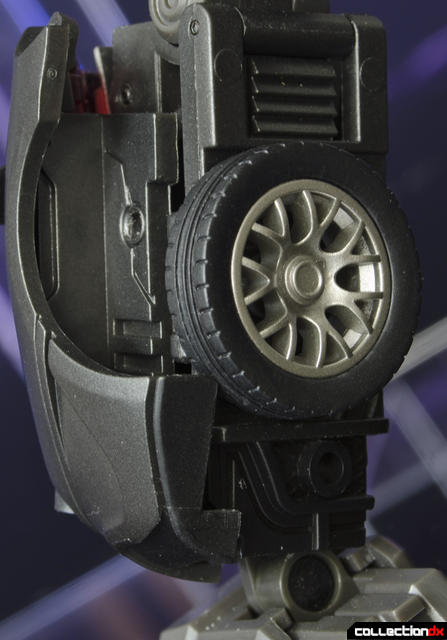 The front of the car collapses and stores on the back, on top of the windshield. I was worried that the backpack sitting on the windshield would scratch it, but the windshield only makes contact with the rubber tires wich keeps it from getting damaged. The rear view mirrors are also rubber so there is no worry about them breaking off. 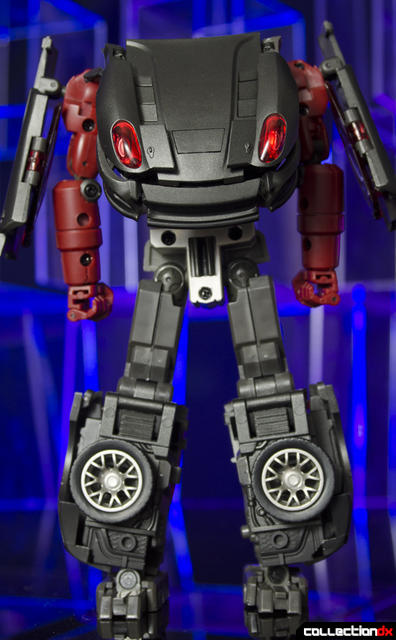 Articulation is mostly above average. Disorder has double elbow joints and excellent range in his shoulders and hips. The only place where articulation is limited in the knees, where he has just under a 90 degree bend, and in his neck wich swivels, but lacks any usable up and down tilt unless he is looking to the far left or right. 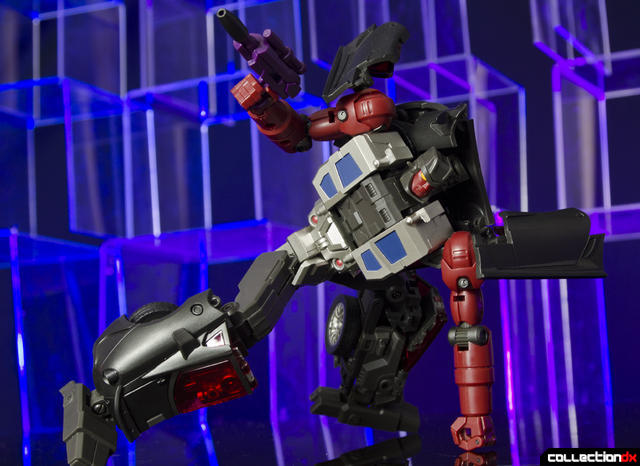 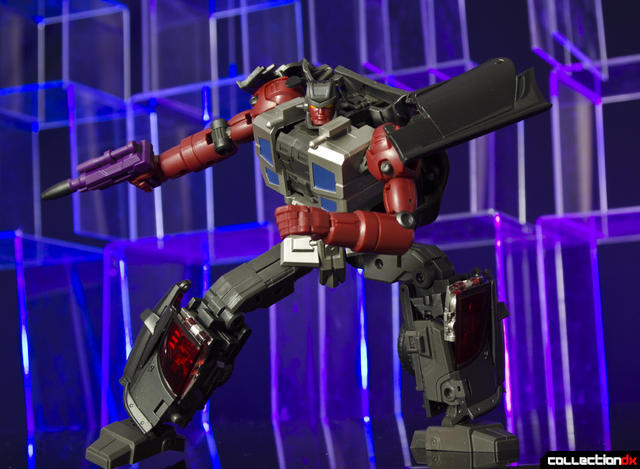 Disorder's lazer rifle slots into his hand and is held firmly in place. The gun stores in the engine cavity in alt mode. 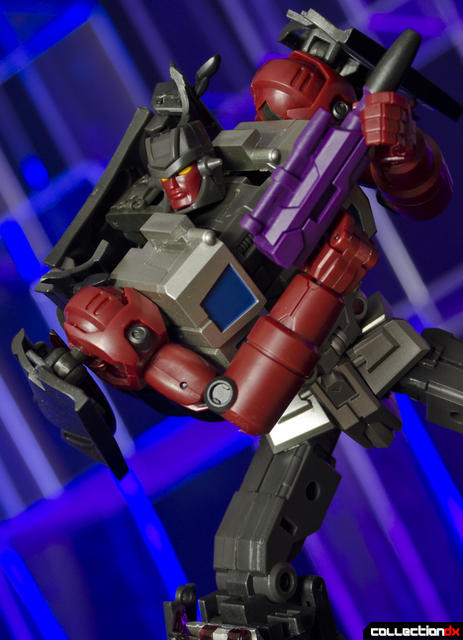 Disorders alt mode is based on the Ferrari 599. Transformation from robot to vehicle is fairly intuitive and enjoyable. Alt mode might just be the best thing about Disorder. 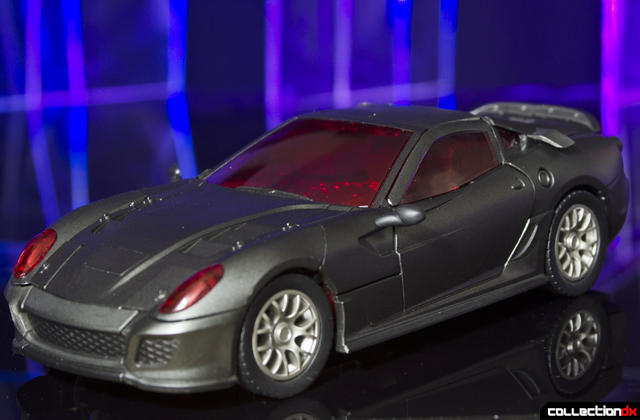 Everything pegs together solidly and all of the panels line up nicely. The tires are rubber and roll freely. 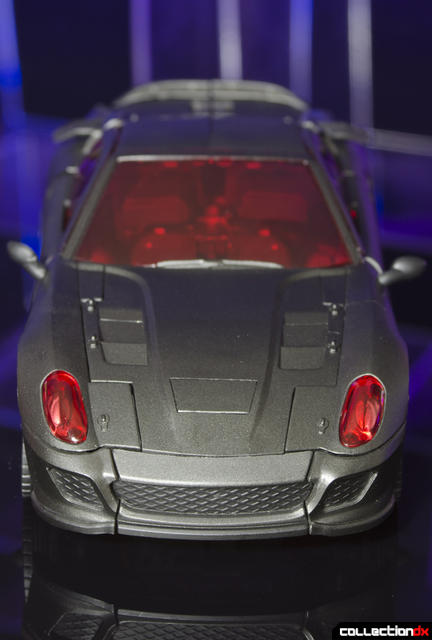 At first I though that the tail lights were missing, but it turns out that the Ferrari 599 actually has vents in the back instead of tail lights and Disorders alt mode stays true to that. 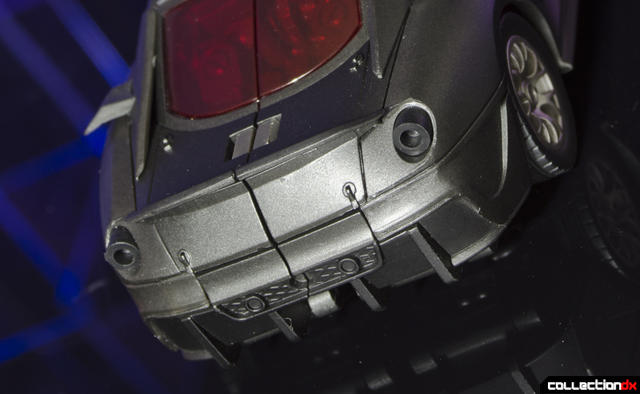 My only real complaint with alt mode is that the gas tank cover is not painted in like it is in the promo photos I've seen. 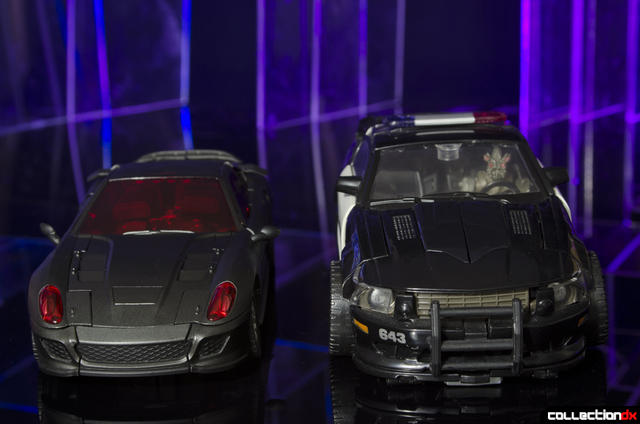 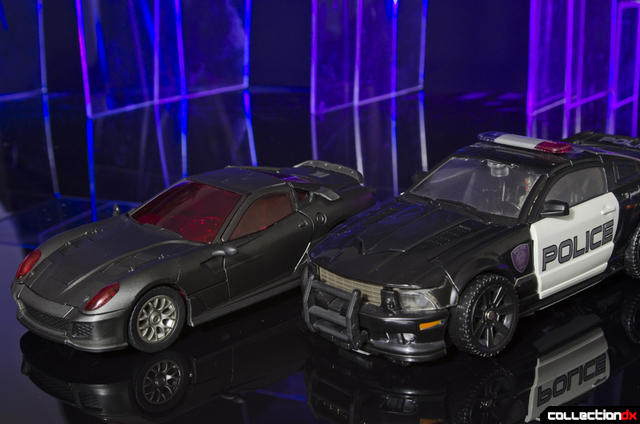 It's obvious that Transformation is benefiting from Generation Toys experience in the 3rd party market. Disorder is an excellent first entry into the TFM line. Both the robot and alt modes are very solid, with no major QC or engineering issues. 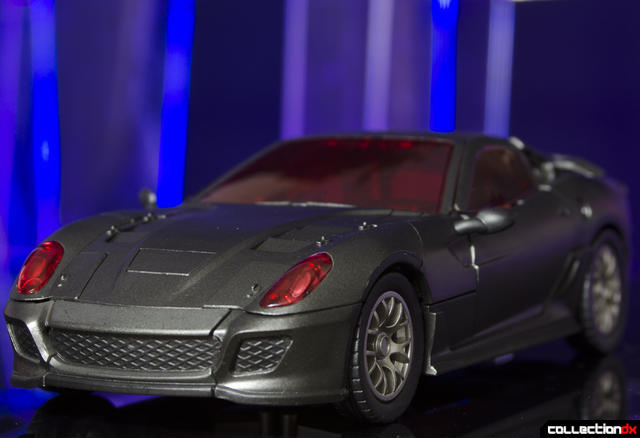 I bought my copy from GCI Toys. I don't normally comment on the retailer that I purchase from, but GCI recently transitioned from providing custom made addon parts, mostly on transformers forums, to full blown online retail, so I figured I would share my experience. I ordered this on a Friday, and had it in my mailbox on Monday. Not bad for half way across the country. On top of that the price was very competitive, and the customer service was top notch. I was not offered any compensation in return for this review.

Glad to see he turned out so well. Visually, the round arms kind of bug me, but hopefully that'll fade once I have him in hand. How would you rate him against FP's T-Bone?

He's pretty much better in every aspect, but he also costs twice as much, so there is that.