Although my life as a collector has been dominated by comic books, toys, music, and movies, trading cards had their time in the sun as well. As a young child, I remember having Star Wars cards and I think anyone my age likely had some Garbage Pail Kids cards at some point in their lives. As a teenager my love of sports, particularly ice hockey, began to bloom so for a couple of years I bought hockey cards and even some baseball and non-sports cards, too. As the market became glutted with so many different companies producing cards in the early '90s, I eventually lost interest in the hobby as a whole and my entire collection was sold or given away.

Now, as an adult collector, I sometimes find myself thinking nostalgically about those younger days of going to a shop or even a convenience store and picking through the packs displayed on or behind the counters. In looking through photographs of other people's collections, I had come to appreciate the way some have incorporated counter top display boxes of yore into their personal displays. I found myself looking for items that invoked this feeling that I could add to my own collection. One line that fit the bill in terms of being compatible with my tastes as well as being fairly easy to acquire was the 1980 Topps Creature Feature trading cards. 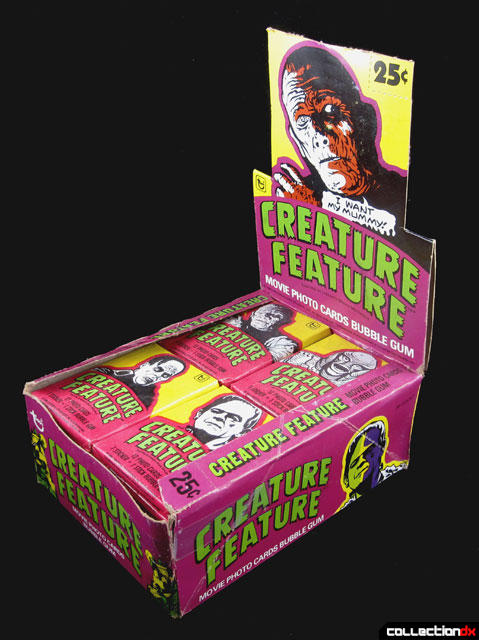 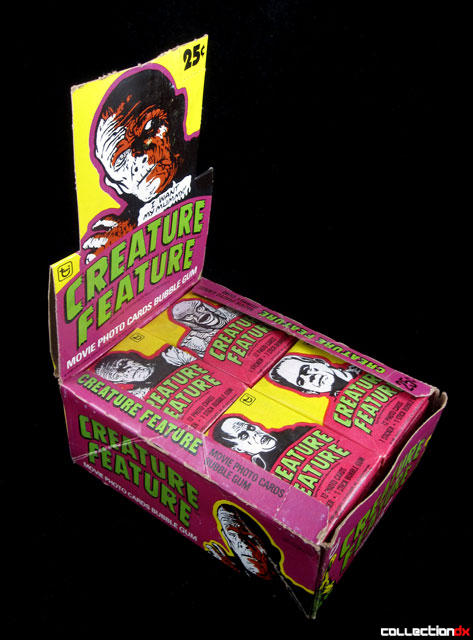 Although I don't remember having seen these at a child, I had seen them in my friend's collection before I even started buying monster stuff and even then I was drawn to the images adorning the fronts of the individual cards packs. 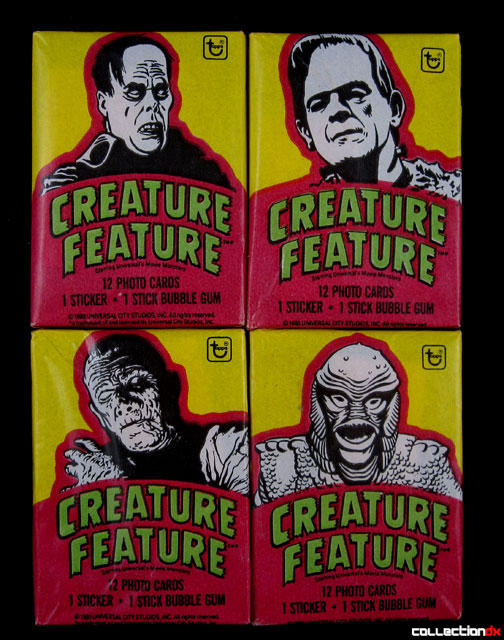 Initially I had purchased just those and had them lying in one of my shelves but when I saw a full display box with a price too good to pass up, I ended up buying it. At that point, I decided I wanted to do a review of them since we didn't have any reviews like it here, but that would mean opening the packs up to scan the images! Perish the thought! So now I had to buy a full set of the cards and stickers loose. But before we talk about it's contents, let's enjoy a few more images from the box itself, shall we?

The top flap folds in to close the box for storage and shipping. 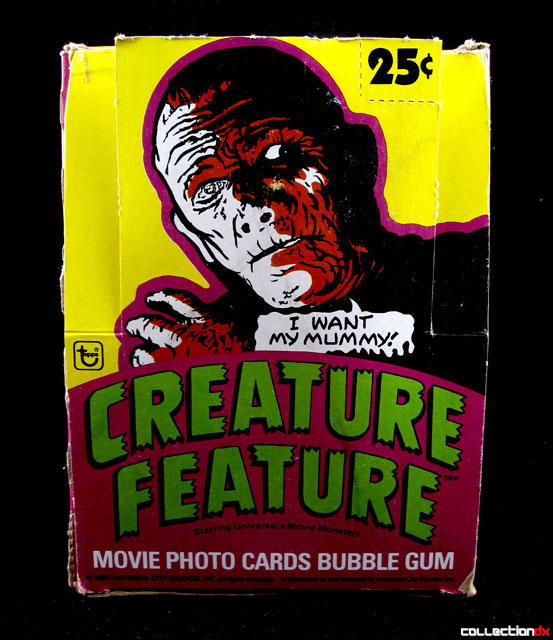 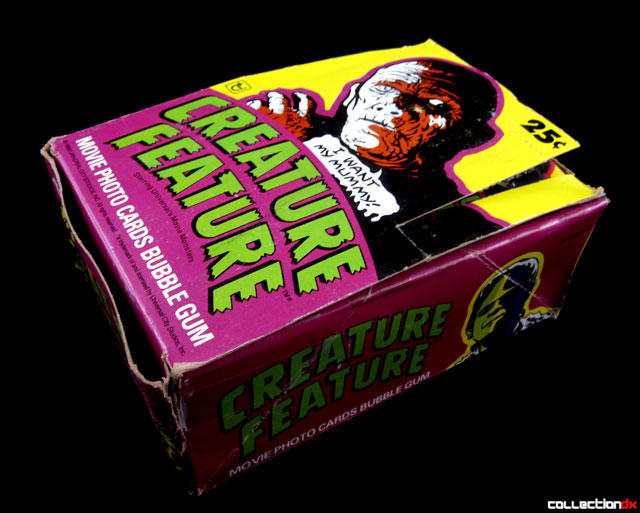 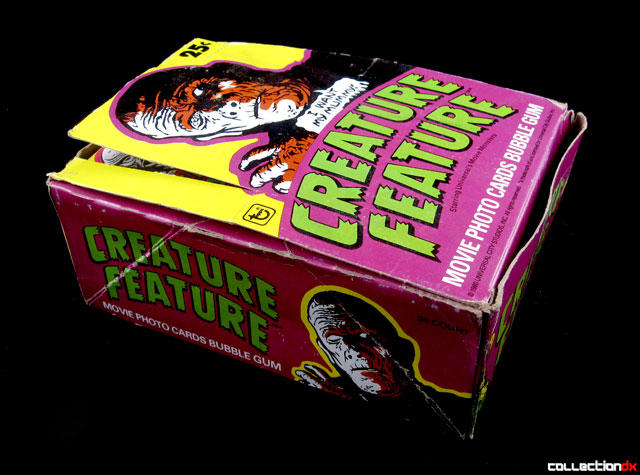 As with most, if not all, cards of this type from that era, each pack contains not just cards (12 per pack, 88 total) but also stickers (1 per pack, 22 total) and bubble gum (1 per pack). And before you ask, no, I am not tempted to eat any of this vintage gum now!

As you might guess, card #1 is an introductory card featuring the Phantom Of The Opera. The front of the card tells you how many cards and stickers are in the series and the back provides a checklist to help keep track of which ones a kid has or still needs. 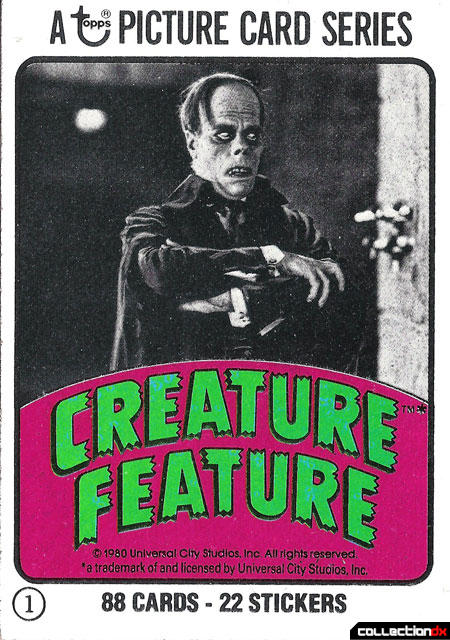 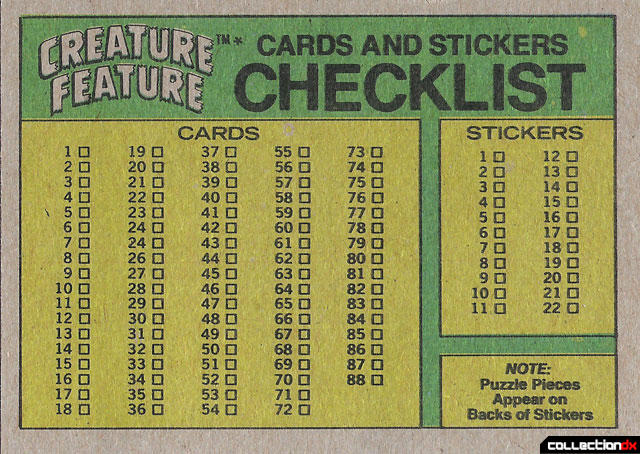 From here on out, this particular series features cards that have images from classic Universal Studios monster movies, each with a silly saying on the front of the card, along with a terrible joke on the back and some tidbit of information about the image on the front. One of the neat things is that not only are some of the images actually from Hammer films (such as Curse Of The Werewolf), but others are publicity and/or stills from behind the scenes, (such as an Boris Karloff in full Frankenstein makeup enjoying a cup of tea off set or shaking hands with a Frankenstein prop, both from the set of Bride Of Frankenstein). 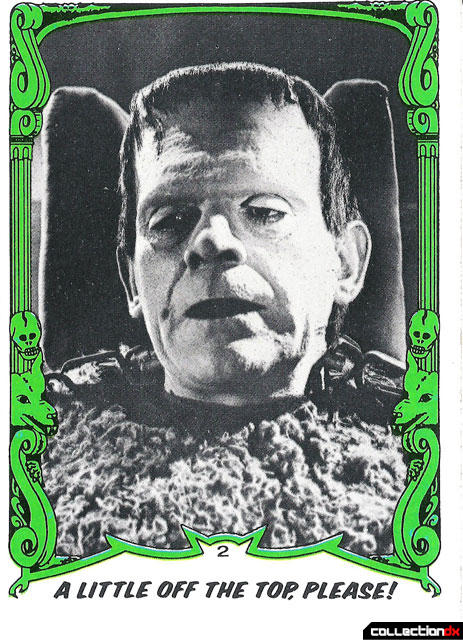 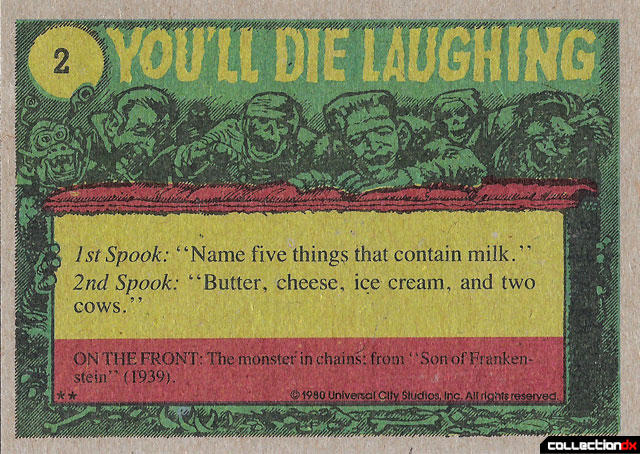 Notice the "You'll Die Laughing" slogan at the top of the back of the card because it has historical significance. In 1959 Topps released a series called "Funny Monsters" which used this slogan and it was resurrected again with the original 1973 "Creature Feature" series. So this one reviewed today is actually the third series of it's type by Topps.

I won't bore the reader with pictures of every single card in the series here. I have taken the time, however, to scan each one and uploaded them all to their own folder in our gallery. If you would like to see them all, please click the link HERE

Now let's take a second to mention the stickers. Within the 22 stickers in the series, there are three different styles employed. Thirteen of the stickers are simply images of the heads of various monsters (labeled the "The Monster Hall Of Fame"), sevem are actually reproductions of original movie posters, and two are simply images of The Creature From The Black Lagoon; one full body, the other from the waist up. On the back of these cards are parts of a puzzle that when combined form an image of the Gill-Man. Although there are 22 cards in the series, it takes only ten cards to complete the puzzle. The back of card #1 shows what the completed image should look like. I'm not sure why it specifies "Puzzle A" as there is no "Puzzle B". 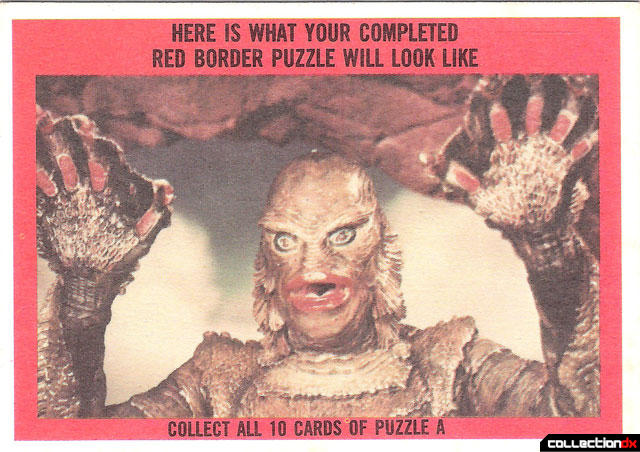 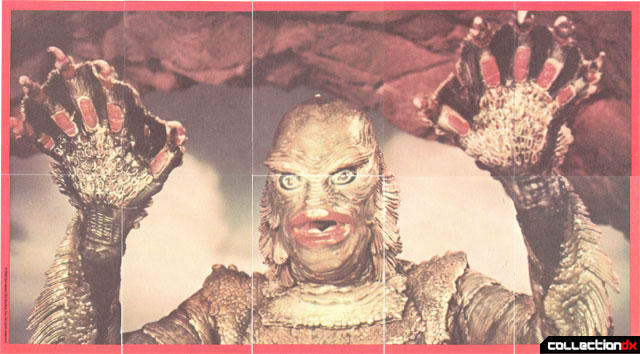 As with the cards, I won't show them all embedded in the review, but each is viewable in it's own gallery HERE.

Now, I'd like to talk about one last thing before I conclude. "But Dave", I hear you say, "you've already told us about the box, the cards and the stickers. You aren't about to cover the bubble gum, are you?!?" Why, of course not! Don't be silly. No, the last bit of information I'd like to impart upon you concerns an advertisement on the flap of some of the wax packs. On the flaps of the packs that have Frankenstein and The Mummy on the fronts, you'll find special offers for mail-away posters of Frankenstein and, a bit ironically, The Wolf Man. I can't help but wonder why the Frankenstein pack offers a Frankenstein poster but The Mummy pack offers a Wolf Man poster, but regardless, that's how it was done.

I had never actually paid much attention to these ads until I actually found the posters for sale and bought them. I can find no other images of them online and no one that I know has seen them either so I think they must be at least somewhat rare so I'm happy to be able to present them to you now. 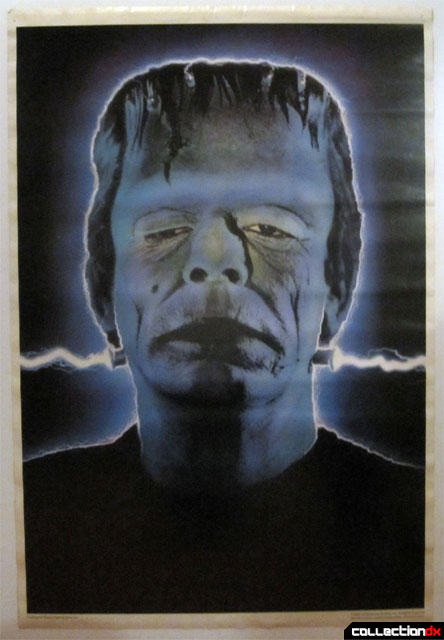 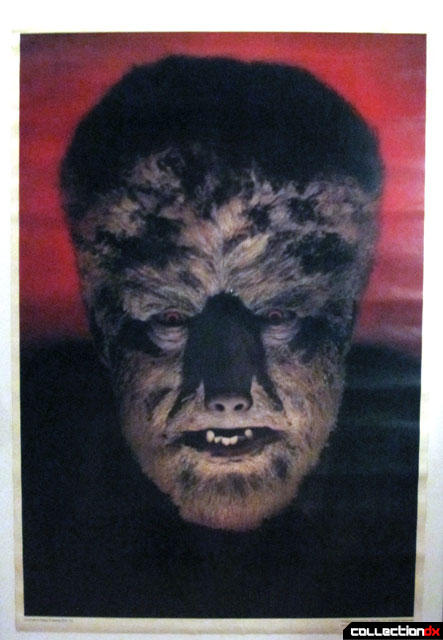 Each poster had both Topps and Universal copyright markings on the left and right bottom corners, respectively.

Just in case that poster does look familiar to you, I should mention that it (along with some masks by Savage Eye) does make an early post-credits appearance in the 1981 Tobe Hooper horror film, The Funhouse! 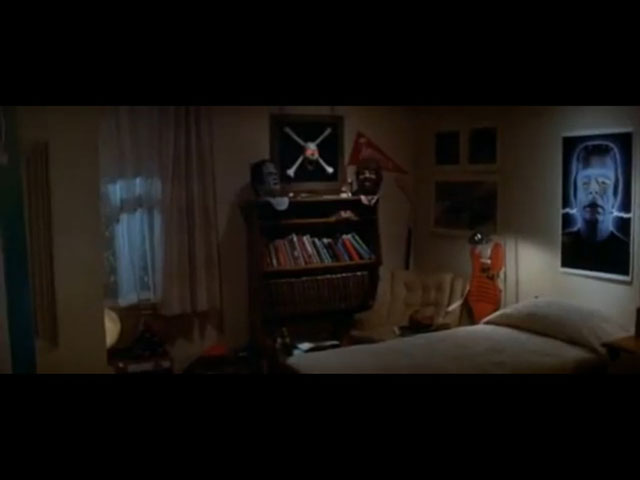 Well, that's about it for this review. I hope you found it to be a refreshing change of pace. Feel free to comment and let us know if you have some favorite trading cards series'!

3 comments posted
This is an amazing review.

This is an amazing review. You get the cards, the packaging, the posters that were mail-aways AND a scene in a movie where one appears. not only that, but if you click through, Dave scanned EVERY CARD and EVERY STICKER. An amazing feat!

As for other card sets - Would love a complete Black Hole or original Star Wars set. Did they make TRON cards also?

Dave never fails to amaze me. I used to read all his old reviews before he came back from his hiatus. And I've read every new once since he has been back. Some of the stuff he reviews I don't even have an interest in, but I have to tip my hat to him because his reviews are hard to top, and the next review is better than the last one. He just makes you want to read them all somehow. Maybe it is because they just scream passion and draw you in. As josh said the dedication here is ridiculous.

I got a chance to talk to Dave briefly at last year's summit and he is an awesome guy. Told me a bit about jumbos and how he started among other things. My mind is in robots so much that I forget he's a horror and monster fan too.

I am so focused on robots now, but when we were kids my little brother and I were all about Godzilla and Universal Monsters when we weren't playing with transformers. I remember the topps cards, the 25 cent machine prizes at the supermarket, you know, the crazy stuff you kind of forget (but Dave doesn't). For us, that stuff was just as cool as getting a robot back then.

We used to watch the Godzilla and or universal monster movies every Saturday afternoon on the sci fi channel and to top it off in the late 80s and early 90s our elementary school had a full set of the Universal Monsters/movies books published by Crestwood (in bright orange binding no less). Those were great because aside from the typical Lugosi and Chaney Jr. Stuff, we got to read kid versions of movies they didn't really show like The House of The Seven Gables. Simplified stories with tons of black and white screen captures. We were in heaven.

We had a lot of cool monster stuff when we were kids because if I remember correctly Universal Monsters were either still quite popular then, or had gone through a little revival lasting through the mid 90s (this is at the time when the Disney channel used to still show actual vintage scary cartoons on Halloween folks). I'll have to see if I can find anything we may have had from childhood and bring it to the summit to share. I can't promise anything because it might be long gone, but I will definitely look.

I only heard about those Crestwood books in the last couple of years, but they seem pretty cool. Oddly, I have an unauthorized monster coloring book that features artwork not only of those, but also of the Aurora model kits and a Jack Davis drawn Frankenstein poster! Anyway, thanks for the kind words, guys. I must say I am happy with this review, even if it is something else that is maybe slightly out of place. I do think it's important (and fun!) to document all the weird stuff out there. And there must be something in the air, as trading cards seem to keep popping up lately. A guy on my Facebook suddenly started posting images of classic "Wacky Packages" and the most recent Swass-Cast that was published today was about the top 3 trading cards series! Odd synchronicity.

But fear not, I won't be bombarding you all with more trading cards. In fact, lately it's been back to robots for me as I've finally taken the plunge and started buying the Shogun Warrior diecasts. We have surprisingly few Shogun reviews on the site and I aim to change that!