The robots knew that even though their small mass-production Sentry Battle Machine gave them the numbers on the battlefield, far too many were not coming back even though they were generally considered disposable to begin with! The semi-intelligent Iron Drones who piloted them were also not the greatest at Battle Machine-on-Battle Machine combat but did better clustered in larger groups with hand-held laser rifles where smarter Devastator command units could keep better tabs on them. These were two serious issues with the robots as they contemplated the newly-formed and surprisingly-resistant Exo-Force on the other side of Sentai Mountain. Also, when Meca One gave the order, they would soon be moving on the not-so-cleverly-hidden stone fortress at the top of the mountain, and needed to operate independent and far from their main headquarters near the Tenchi Bridge. Ranged combat would work well for the larger Battle Machines, but the smaller ones were faster and more agile, though lacking the armor and power. But they could get where they needed to fast and peck away at defenses that the larger ones might be more vulnerable to. So the robots decided to play to the strengths of a smaller Battle Machine by scaling down their needs. The Claw Crusher is an evolution of combat for the robots. Though it still features a small rapid-fire laser autocannon on the left arm like the Sentry, the paired medium-range missile launcher was scaled back to just a single missile in the right shoulder. However, the Battle Machine’s primary weapon is a very large three-fingered clawed hand which dominates its physically-stronger right arm. This allows it to, like the robots’ larger Fire Vulture, claw deep into their target’s armor or destroys their weapons, and then blast away with the laser autocannon. Though it is still a mass-production model which dictates that it has thinner armor and simplified control & communication systems, to ensure that the job is done correctly, the Claw Crushers are controlled by silver Devastator robots. 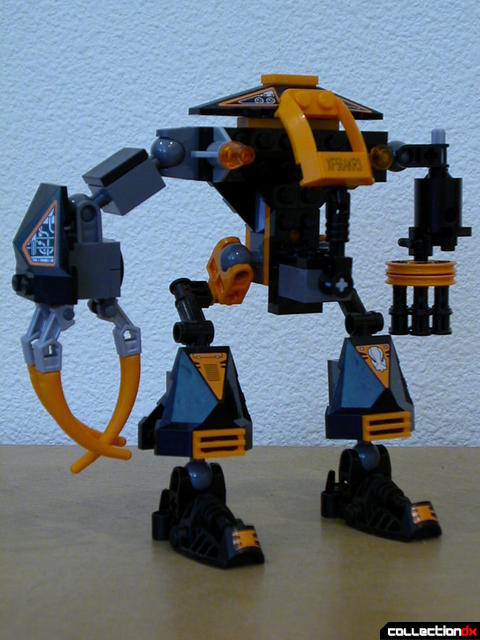 The Claw Crusher (back) shares similar-thinking in its design & parts used with the Cyclone Defender, just like the previous year’s miniature Sentry and Uplink did. The snap- and free-rotation joints were all replaced with ball-&-socket joints at the shoulders, right elbow, hips, and ankles to provide for more fluid posing. This mirrors their frequent and popular use in the “Bionicle™” line which continues successfully to this day. This also becomes a well-known, if little-advertised, problem as LEGO’s ball-&-socket joints are known for wearing out quickly when used a lot and aren’t the greatest for supporting heavy loads. (I’ve become aware of this over time since I used to collect “Bionicle” sets too, and so I’ve become somewhat paranoid of ball-&-socket joints in new LEGO sets.) The legs can pose in more human-like fashion despite not having a knee joint or not really looking like a human’s legs; however the parts used for the knees bends a little to look like them. The feet are the same since-piece parts originally designed for the six “Bionicle” Toa Metru figures (#8601-8606) in 2004, but look appropriately functional here. The arms are radically different from each other. The left arm uses the body of a “Star Wars™” R2-type astromech droid, and there’s some kind of old school single-piece space sensor tool used to allow the six barrels of the cannon to turn around. The right arm is a mixed bag of tricks. It has two ball-&-socket joints, but the shoulder actually becomes restrictive because of this and how the parts were originally designed. Like all previous ‘fingered’ Battle Machines (small white mecha piloted by Hayato from the Gate Assault set, Supernova, large blue Silent Strike from the Sentai Fortress set, and Cyclone Defender), it uses robot minifig arms for fingers, though the three orange claws were originally developed for the tails of the 2003 “Dinosaurs” line! The clawed hand can open and close easily, though if its ‘nails’ aren’t aligned perfectly they’ll push into each other! This time, the silver Devastator figure gets his head wrapped in an orange restraint harness of-sorts, but remains in an open-air cockpit which is bulked-up from the Sentry’s. 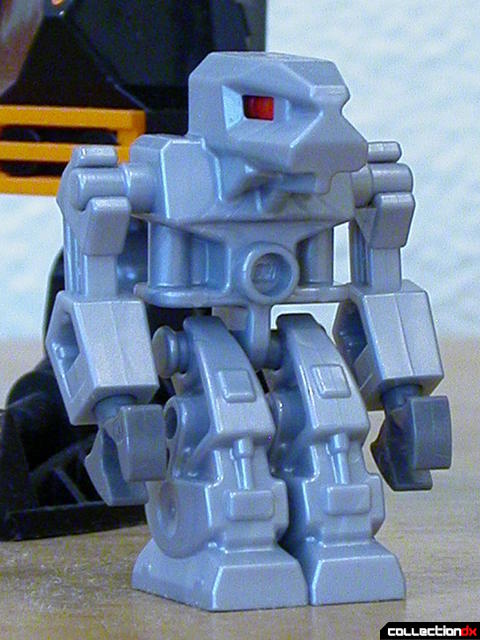 Lego Set #8101 brings back the powerful-looking silver Devastator robot minifig. Though this time, it has none of the transparent plastic swirled into its torso like most of the previous sets from the 2006 line did. For the eyes, a red #2 Technic bar is once more inserted into the back of the head. The hand claws also rotate at the wrist, and need to be attached. Normally, when a Lego set needs specific details on a part, such as a control panel or flag, the image is printed or painted directly onto specific parts. “Exo-Force” continues on by using stick-on decals; something that was rarely ever used in the past. There is a small sticker sheet which provides allegiance markings, warning symbols & notices, and names- some of them written in Japanese text! Unlike the human Exo-Force Battle Machines, the robots’ Battle Machines do not have human language markings on them. This allows for a wider range of piece marking without Lego having to create a completely different piece each time, and merges the “Exo-Force” and Japanese toy influence closer together. It does, however, have a small downside- because of the design of the decals, some of them cover places where other Lego pieces can go, which limits how a decal-applied piece can be used or taken apart. There are no conflicts in Set#8101. The common gimmick of the debut 2006 line was- aside from them all being giant robots (!)- the introduction of the LEGO light brick with clear fiber-optic cable, though this was seen through almost all of the sets. They also had instructions for building an alternate set with the same parts on their homepage. Alas, neither of these returns in 2007. Instead, LEGO brings us a pivotal part of the storyline: the EXO Codes. When entered into the computer in the Golden Tower, they allow the refugees inside the Golden City to access a special feature within the ancient technological fortress. Each 2007 “Exo-Force” sets has at least one exclusive EXO Code located on a flat 1x2 plate placed somewhere on the Battle Machine’s body. When entered into the Code Brick Central area of Exo-Force’s homepage, it gives you special access to new things online like exclusive background info on the set, stickers & wallpaper for your computer’s desktop, images to be used for real shirt iron-ons, IM avatars, and more! (Not to spoil anything, but the only really unique thing for each set you get access to is a 10-sec silent video clip of your set in action on the site!) 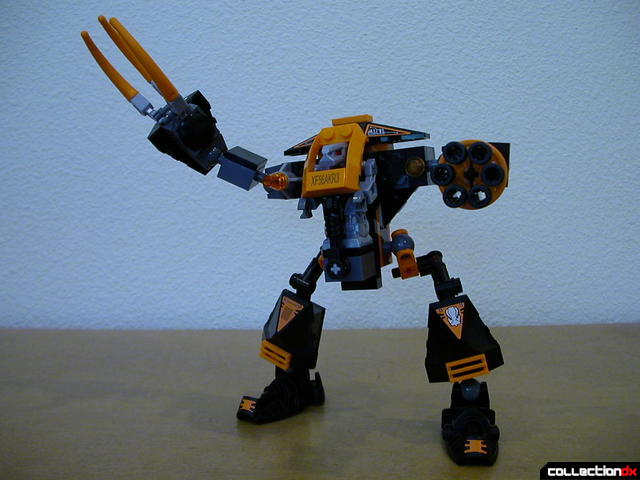 I bought this set at the exact same time I got the Cyclone Defender, just like I did the Sentry and Uplink last year- small samplers to see what the line will be like on both sides of the Sentai Mountain for that year. This time around, however, the two smaller Battle Machines don’t look quite as similar in features and construction like they did before. This one has a wider stance, and a ‘paint job’ to match for Halloween. I can find little wrong with it, and those are just personal tastes not worth mentioning here. Rather than going for complete uniformity in its design, the right arm is this huge, lop-sided limb than hangs awkwardly and looks like a giant club. I will say that I also like having the Devastator in some kind of roll cage-like restraint that actually wraps around its head. I like the Claw Crusher, and recommend getting it. 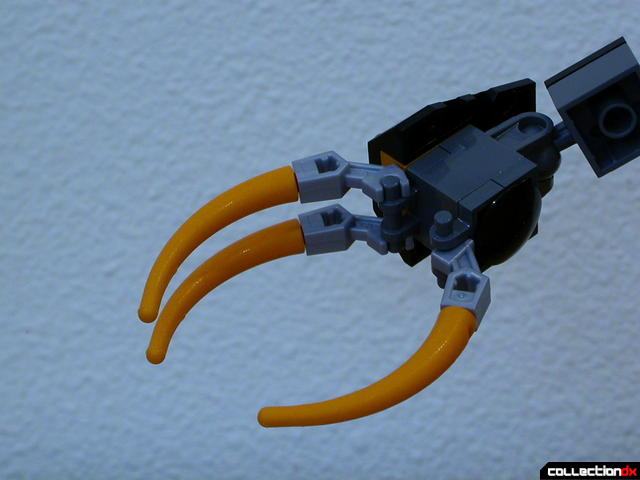 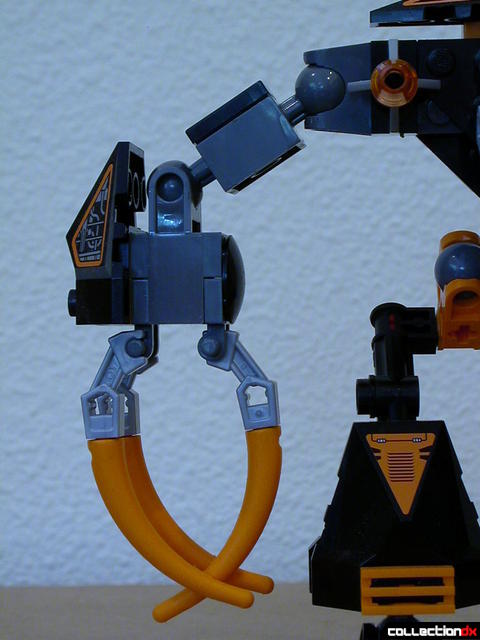 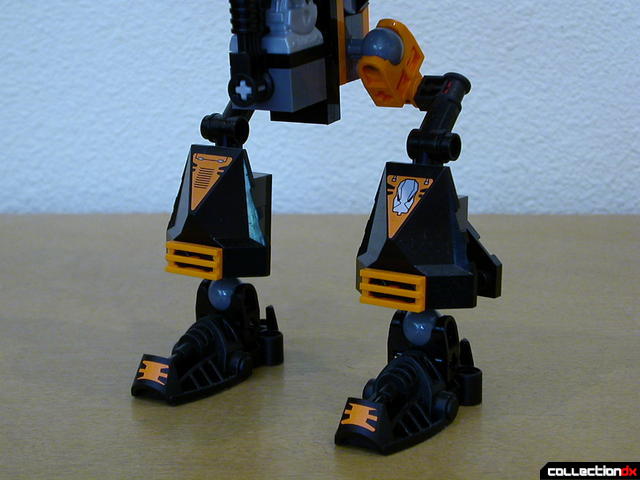 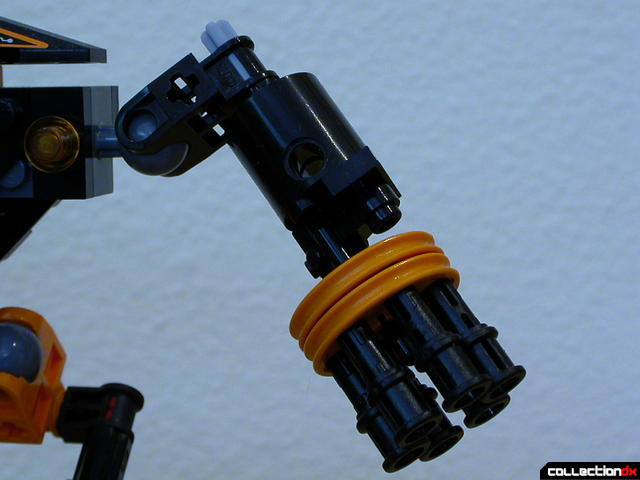 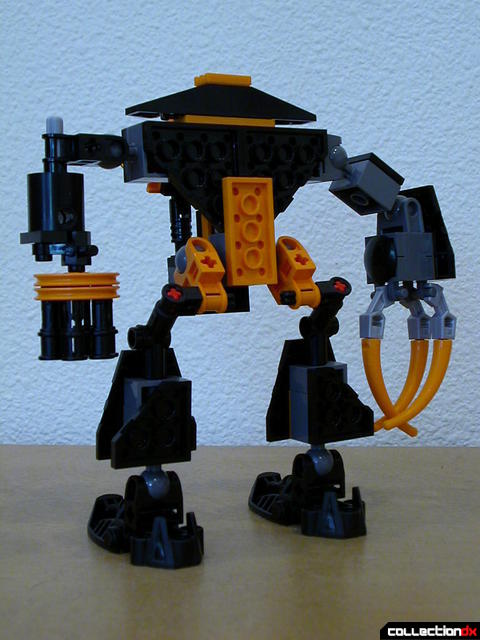 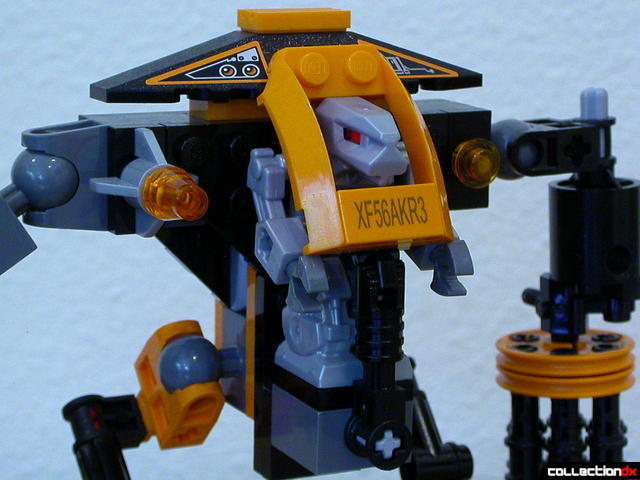 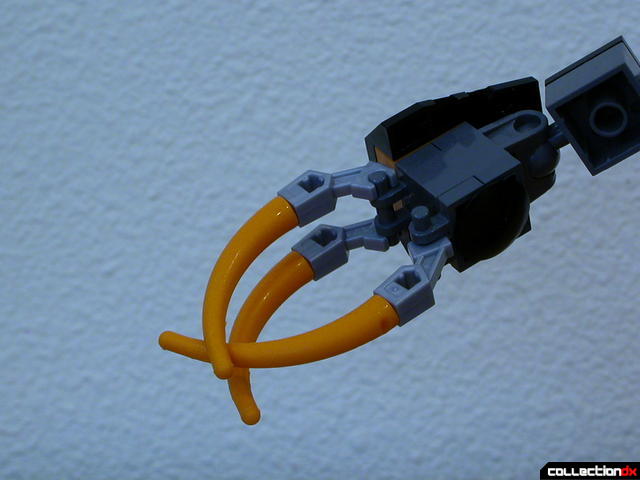 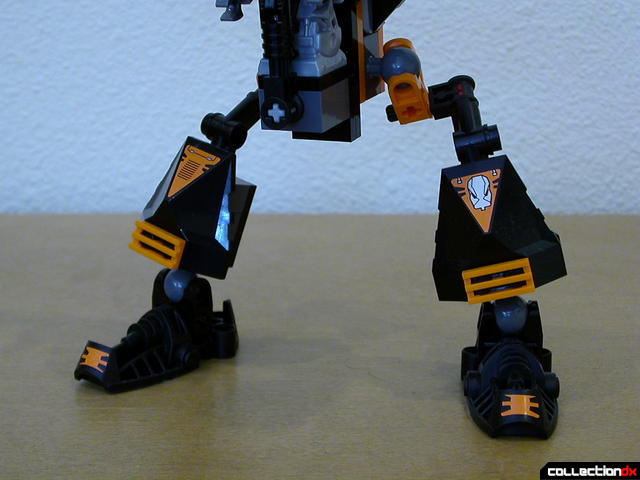