After shifting around hundreds of plastic baggies of toys at a local thrift store a few months ago I came across a figure from a line of Bandai toys that I had completely forgotten about called Rock Lords. Rock Lords was a subset of Popy's Machine Robo toys that transformed into rocks instead of vehicles and repackaged in the United States by Tonka.

It is easy to know why I forgot about the Rock Lords line. Although I remember seeing Shogun Warriors and Micronauts as a kid they were mostly my older brothers and cousins toys. GoBots were actually the first line of Japanese robot toys that I feel were marketed in a big way to my generation. 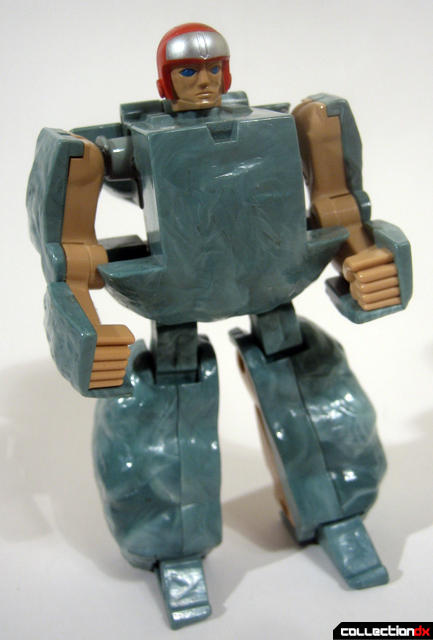 GoBots originally blew me away but about a year later Hasbro would release their Transformer line and suddenly GoBots line looked too simple for my tastes. GoBots also had a terrible cartoon to push the line especially compared to Sunbow’s Transformers cartoon. By time Rock Lords were released I had no interest in GoBots and the fact they transformed into rocks did not thrill me too much. By that time I saw GoBots as kids toys, I had already moved onto Godaikin and Spiral-Zone. 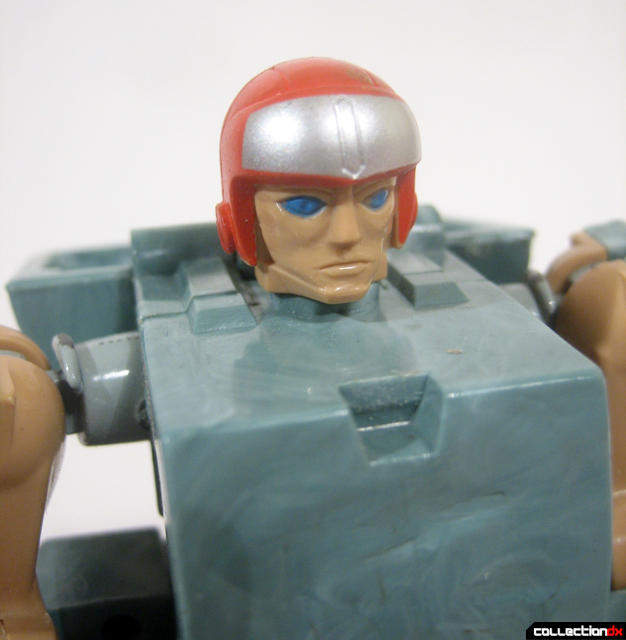 I believe that a reevaluation of Machine Robo / GoBots is happening with collectors right now. Today I think they are a great line of toys that are almost the Japanese equivalent of classic Lensley Matchbox line of die-cast cars. Machine Robo are nearly the same scale, they are numbered and they are highly detailed for the scale that they are in. Like Matchbox the beauty of Machine Robo is in its simplicity. 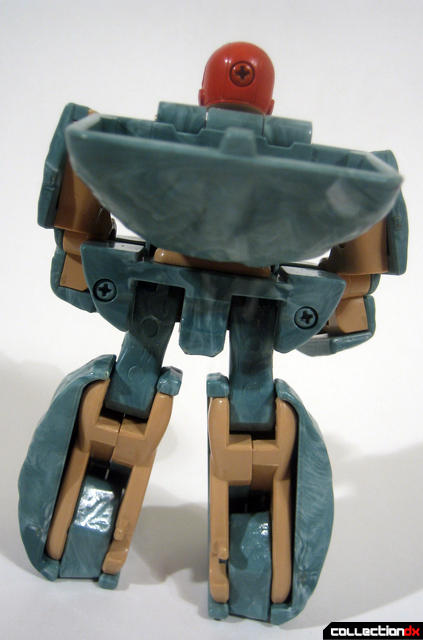 Boulder comes carded with the action figure and a red laser gun that is missing from this example. His original Japanese name was Battle Rock. 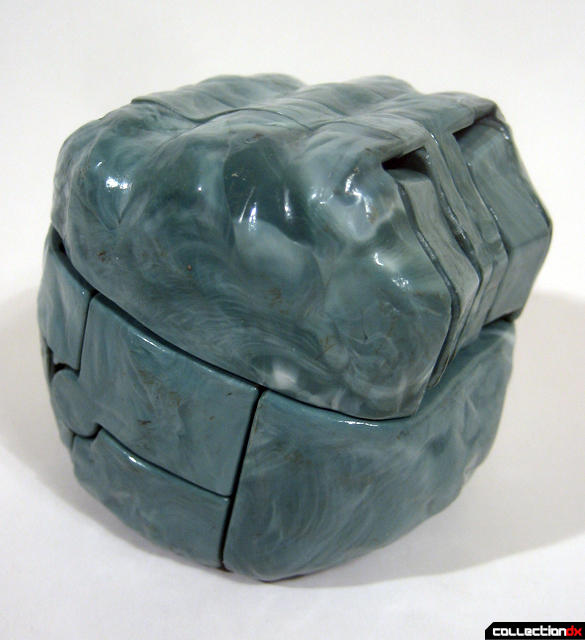 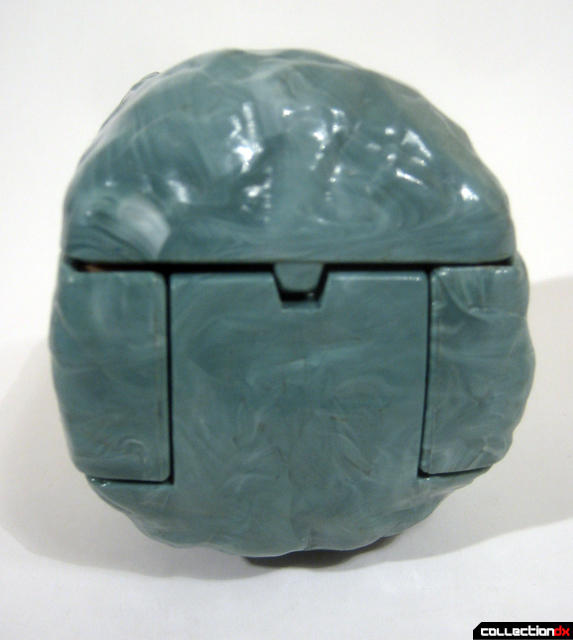 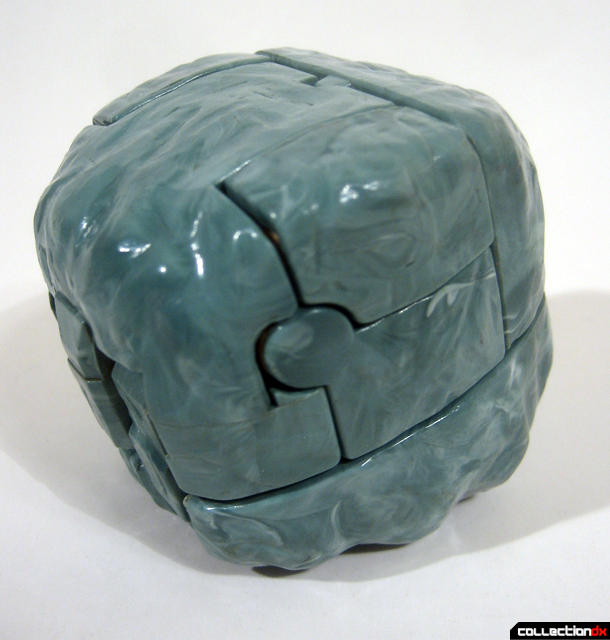 I am still not a fan of Rock Lords but having picked up Rock Lords leader Boulder I was quite impressed with the some of its features and I can see why some collectors like the line as much as they do. For example, Boulder is an action figure not just a robot with no articulation that just stands there. The head turns, the arms rotate at the shoulder and elbow, and the legs move. Also, I love the color and the texture of the Boulder when it is in the rock configuration. Another great detail is how Bandai painted the screws to match the color of the plastic around it. 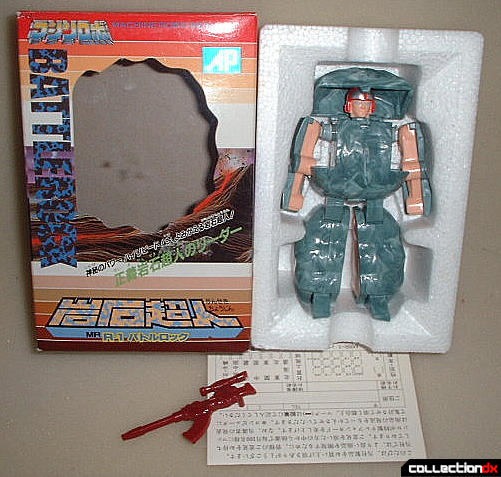 By itself, the rock is very bland but after looking at pictures of people’s collection of all the Rock Lords in the rock configuration piled on top of other Rock Lords, its all quite impressive with the different types of colors, textures and rock shapes. There are just too many other toy lines that I like much more and I just do not see myself ever collecting Rock Lords, but it was great to re-evaluate Boulder and give him his due.

After 2 1/2" Shoguns and Mini-Godaikins, the next logical step is GoBots/ Machine Robo. They're pretty much the same scale, and feature weird paint schemes and die-cast metal, plus they're dirt cheap and look great standing next to the aforementioned robot icons. Bandai continues to grow on me.

Rock Lords were a big hit with my younger brothers, and I recall checking them out on the sly and being impressed. They are great toys that (imo) owe a debt to those transforming eggs that I can't name. In both cases it seems the transformation feature is more about compartmentalization rather than literal story appeal. As older collectors I think the tendency is to neglect the fact that we no longer see with a child's eye, so when the gimmick doesn't hit you in the face it's lost. As a kid, a make-believe heroic rock might carry additional implications (strength, resolve, etc...)as well as merely being a cool thing to roll across the floor or throw at your sister. You mention photos of piles of these things and the various shapes and colors, and I bet that's what's up where this toys appeal is concerned.

Thanks, I am digging the Tonka/ Bandai love.

These guys were pretty awesome in the Machine Robo anime. They could launch themselves in rock mode and smack people. They also spoke some weird language.

I never saw the Battle of the Rock Lords cartoon, I remember it was a big deal when it came out but I think it did real badly, I'll have to check it out,

The Rock Lords movie is one of those things that has always stuck with me since childhood. It was one of about five tapes I'd keep popping into the VCR. The movie itself is a pretty standard Hanna Barbera movie. It's actually not that bad. For weird trivia, it features Peter Cullen and Frank Welker as the two-headed robot Sticks and Stones.

Telly Sevalis as Magmar... I LOVE the Rock Lords movie.

I recommend everyone watches this: http://www.youtube.com/watch?v=PeNg9ID88bI

It even features the Jewel Lords!

The Gobots cartoons were lousy by any metric. The Machine Robo cartoon was really well done, at least animation-wise. The rock lords actually look badass! Although seeing Diaman as a dude is a little strange. Now I know why they only put lipstick on the American version.

Jeremy/Andrew: have you seen the MR cartoon? Any good?

Machine Robo is pretty good if you're into 80's kung fu anime with a mecha twist. It manages to be pretty fun.

"Machine Robo is pretty good if you're into 80's kung fu anime with a mecha twist. It manages to be pretty fun. "

Yeah....too bad Machine Robo didn't manage to appeal the Transfans' interests in the aftermath of GoBots. It doesn't matter if it's Machine Robo or GoBots, for as long as they have their haughty attitudes intact they'll only perceive it as a Poor Man's TF.

Now compare the previously linked video to this, the trailer for the Gobots Rock Lords movie: http://www.youtube.com/watch?v=67Dwz03jlMQ&NR=1

It's almost endearing in its ineptitude. Almost.

That MR vid is awesome... seeing Fi-tor kick butt was a trip. I've been meaning to rewatch BotRL haven't seen it in a long time.

I used to own one of these! Unfortunately most of my toy collection from the 80s was lost during the Iraqi invasion on Kuwait. This was really one of my favorite figures and I loved transforming him into a rock and convincing my cousins that it was a real rock I found on the beach.

it sucks when somehow, someway you lose all of your precious stuff and never can see it again. For me, it was garage sales and moving houses, where packing up often means losing things along the way, but going through hardships is even worse T.T