When Hikaru, Takeshi, and Ryo were tasked to find the Golden City, they were already pretty well worn out from the furious battle that had occurred only days earlier. The Supernova and Stealth Hunter Battle Machines damaged beyond repair in the battle, they had to fall back on the Grand Titan and Silent Strike respectively for the search, while Ryo vigilantly kept use of his small Uplink; Hayato had stayed behind to guard Sentai Fortress with the White Lightning. When the three finally found the Golden City and tried to get through its passive defensive field, their Battle Machines were hit with a powerful electric pulse which disabled them and fried all of their systems. Finally breaking inside, they eventually made it to the tall Golden Tower at the center of the city, where they found three advanced human-built Battle Machines in storage, waiting for them. Takeshi claimed the large white and maroon Blade Titan for himself. Spotting more-advanced armor than his regular all-red Grant Titan built by Exo-Force, it stood patiently alongside the Sky Guardian and Cyclone Defender in a storage bay for when the time would be needed for it to rise and defend the Golden City. But it has parallels with the Grand Titan in more than just name and color. The left arm mounts a six-barrel heavy laser autocannon which punches clean through any Battle Machine armor, but seems to not have nearly the high heat management problems associated with energy weapons. But it can’t completely avoid it either- the two shoulders mount wide heat exchange radiators behind them, which partially shields & redirects the Battle Machine’s infrared signature towards the back, away from opponents ahead of it. A cluster of four high-yield concussion grenades sit in a small launcher above the right shoulder as well; what the laser autocannon can’t immediately get to, the grenades can slow down until the pilot can deal with it. The right arm has a dedicated shield which can reflect or absorb incredible amounts of damage even compared to the rest of the armor on its chassis! But here is where the Blade Titan lives up to its name- if an opponent gets too close, the shield expands two large sword-like blades, and then a high-torque motor spins the entire assembly up to high speeds! Unlike the Cyclone Defender’s own spinning shield which is designed to deal with smaller inner-city threats, the one on the Blade Titan has no problem completely taking the limbs off of larger Battle Machines. And to round it all of, the Battle Machine spots an advanced communication package to keep in contact with the control center located in the Golden Tower in the middle of the city. The Blade Titan seems to have been designed as a front-line, short-to-medium range Battle Machine that could operate well both inside and outside the city’s gates. Like Exo-Force’s Battle Machines, the Blade Titan uses a similar control system which mimics the movements of its pilot, so it was easy for Takeshi to adapt to the advanced design. 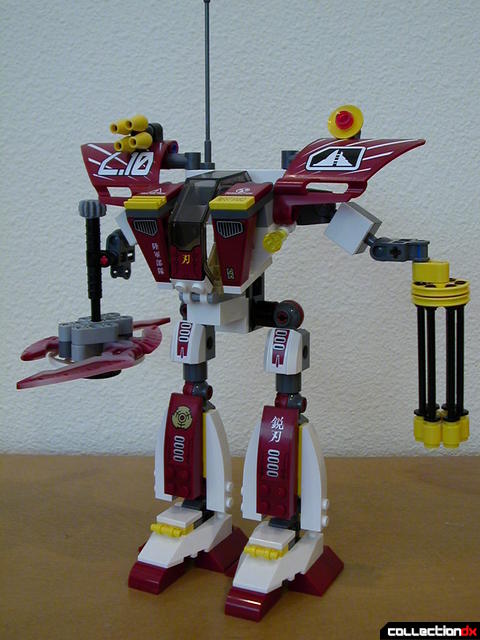 The Blade Titan (back) is basically a rehash of the 2006-line Grand Titan, but with different parts. The snap-rotation joint system which debuted in the “Knights’ Kingdom™” line (and was later used in the failed & much-criticized “Galidor™” line) returns to the “Exo Force” line. Made popular by the fact that not only did the figures have a very wide range of motion, but they could hold poses for extended periods of time which ball-&-socket joints couldn’t on larger figures; something that became more apparent in “Bionicle™” sets. The legs have snap-rotation joints in the hips, knees, and ankles which allow it to assume a wide range of motion for poses. Remember those ball-&-socket joints I was talking about...? Both arms use two ball-&-socket joints each. The lower half of the left arm has a pivot point for the six rotating tubes of the laser autocannon. But it seems somewhat underpowered compared to the LED-‘powered’ cannon on the Grand Titan, as there’s nothing here to indicate a power generator or anything technical; it just sits there looking rather weak. The right arm isn’t much better, though with the parts used it’s understandable. The shield (back) has quite a lot of holes in don’t ya think...? The special feature of the blades spinning out is actually a centrifugal effect rather than a spring or rubber band-driven effect; by twisting the shaft with the knob fast enough, it forces the blades to extend outwards to double their length (back). The two blades- which have a swirl of maroon and white plastic mixed during the molding process- are the same as the spear-like blades for Takanuva (#8596) and the evil Makuta (#8593) from the 2003 “Bionicle” line, but in those cases they were plain silver. The cockpit is enclosed within a blocky upper torso that actually slants downwards a bit.

Lego Set #8102 comes with a new version of the Takeshi minifig different from the previous year’s: a new ‘flight suit’ of maroon and gold, and he has the same two separate facial expressions (one painted on either side of his head) and green spiky hairstyle piece introduced in the “Exo-Force” line, which adds to the Japanese anime style of the series. When the head and hair are flipped around, Takeshi either displays a determined face, or a battle-cry expression, both with a thin red scar on the left side of his jaw. (This double-face design originated in the LEGO “Spider-Man™” minifigs from 2001 and 2003, but is now becoming more commonplace in themed lines like “City”, “Star Wars™” and “Batman™”.) Normally, when a Lego set needs specific details on a part, such as a control panel or flag, the image is printed or painted directly onto specific parts. “Exo-Force” continues on by using stick-on decals; something that was rarely ever used in the past. There is a small sticker sheet which provides allegiance markings, warning symbols & notices, and names- some of them written in Japanese text! Translations of the Japanese text are given on the sticker sheet, but do not go on the parts. This allows for a wider range of piece marking without Lego having to create a completely different piece each time, and merges the “Exo-Force” and Japanese toy influence closer together. It does, however, have a small downside- because of the design of the decals, some of them cover places where other Lego pieces can go, which limits how a decal-applied piece can be used or taken apart. There are no conflicts in Set#8102. The common gimmick of the debut 2006 line was- aside from them all being giant robots (!)- the introduction of the LEGO light brick with clear fiber-optic cable, though this was seen through almost all of the sets. They also had instructions for building an alternate set with the same parts on their homepage. Alas, neither of these returns in 2007. Instead, LEGO brings us a pivotal part of the storyline: the EXO Codes. When entered into the computer in the Golden Tower, they allow the refugees inside the Golden City to access a special feature within the ancient technological fortress. Each 2007 “Exo-Force” sets has at least one exclusive EXO Code located on a flat 1x2 plate placed somewhere on the Battle Machine’s body. When entered into the Code Brick Central area of Exo-Force’s homepage, it gives you special access to new things online like exclusive background info on the set, stickers & wallpaper for your computer’s desktop, images to be used for real shirt iron-ons, IM avatars, and more! (Not to spoil anything, but the only really unique thing for each set you get access to is a 10-sec silent video clip of your set in action on the site!) 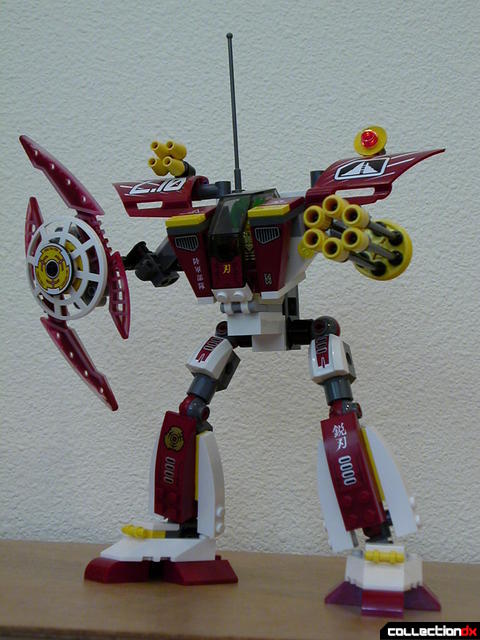 What I liked about the earlier Grand Titan was that it was solid looking; there was power behind it, and it didn’t stand for flash. It looked tough, despite the lack of detail on the back of its legs and the thin joints used for the shoulders. And these are things that this set does. I thought the dark red ‘hooves’ on the feet were a bit odd looking, and I didn’t like how thin the arms were, particularly on that autocannon. Something else I missed was the LED light brick with the fiber-optic cord, and I would like to see it come back. Unfortunately, we lost the light brick feature so that we could have the spinning shield (which never wants to store closed for me). The shoulder armor sections are also way too lose, and I thought that they could have anchored them better so that they didn’t move around; they don’t get in the way of the arms anyways so it’s not that big of a deal. If I used star ratings (which I tend not to), I’d give the Blade Titan a 4-out-of-5. [Oh, and, LEGO...? Please stop using ball-&-socket joints on these guys, huh? They’re annoying for a set this big, and they just wear out too quickly in the hands of kids. Stop it. Just stop it.] 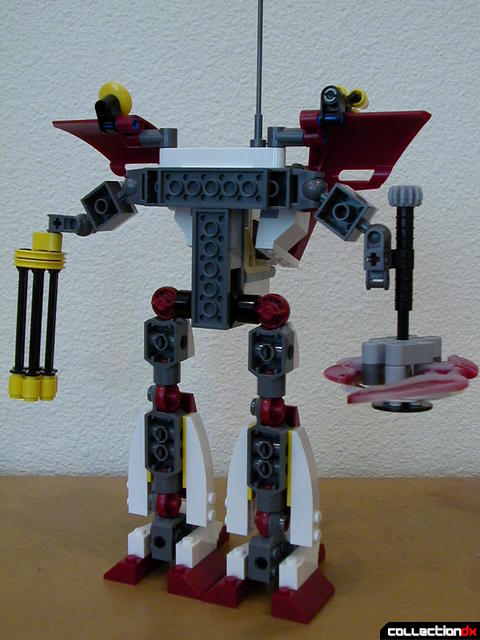 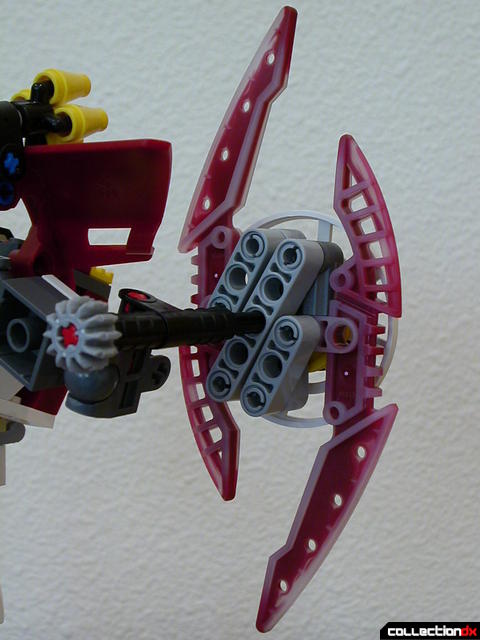 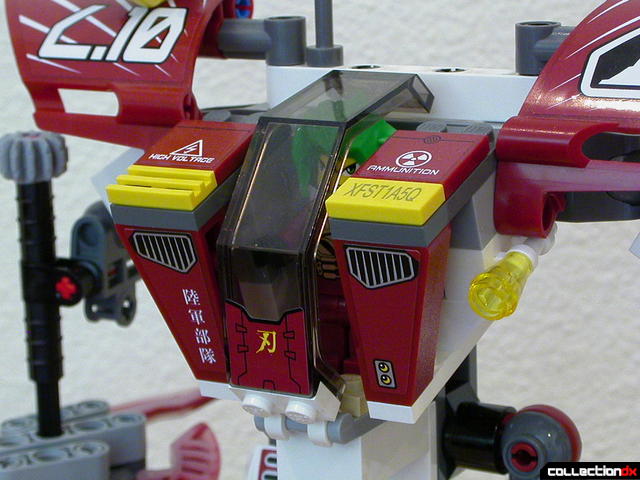 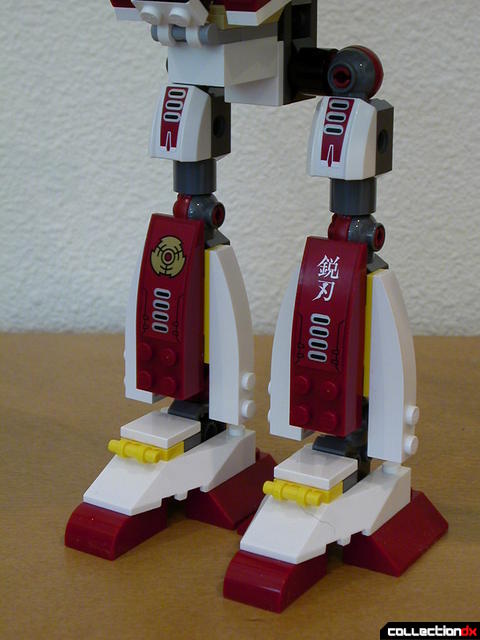 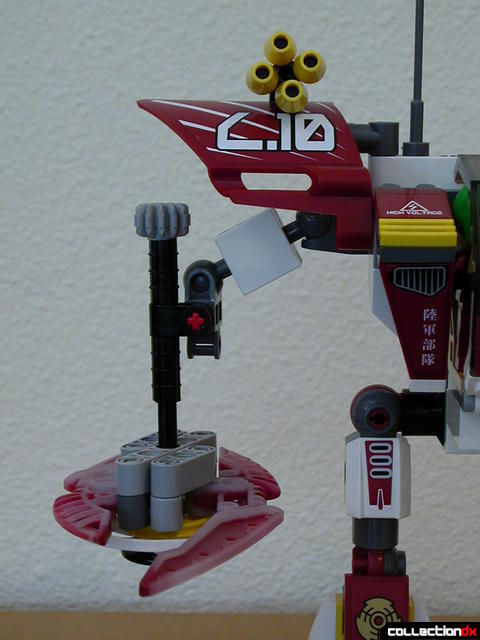 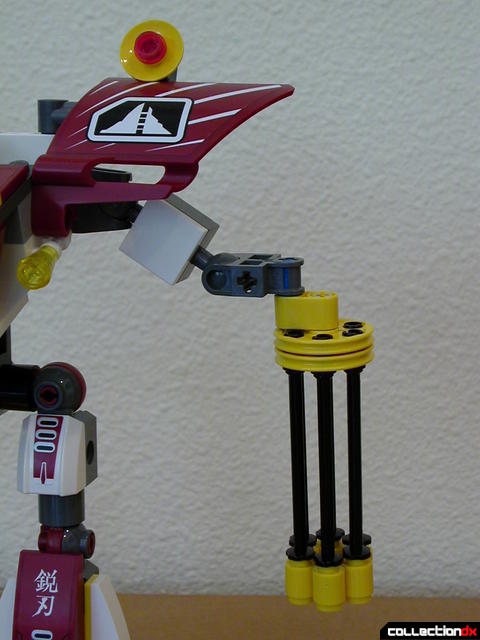 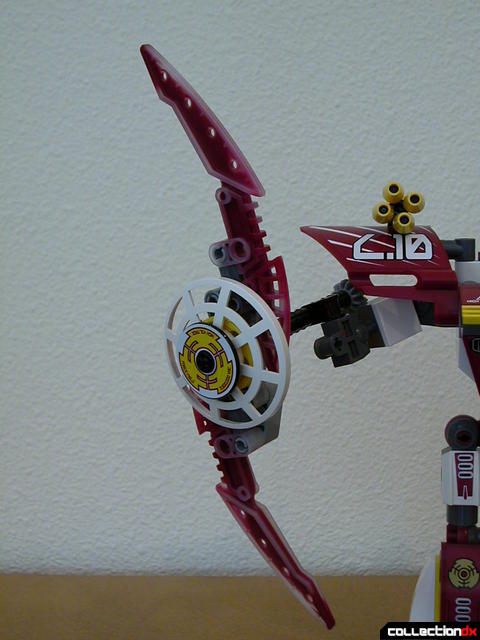 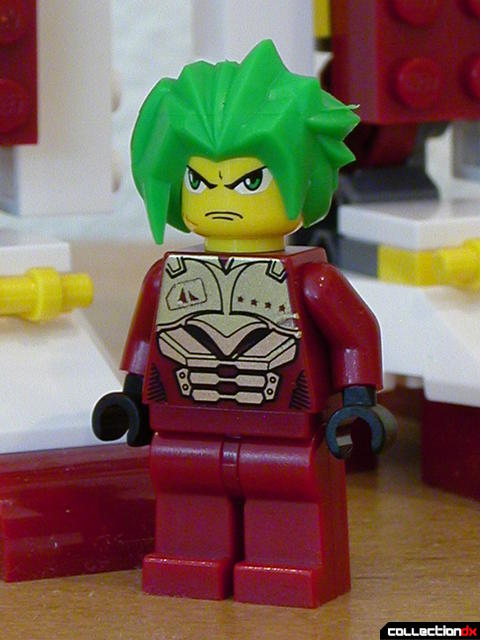 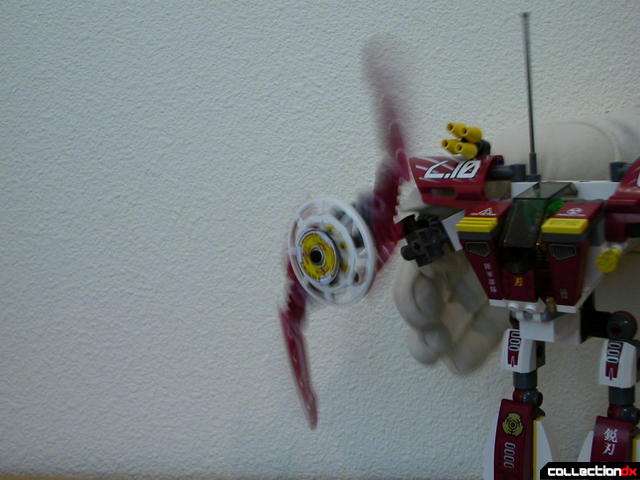 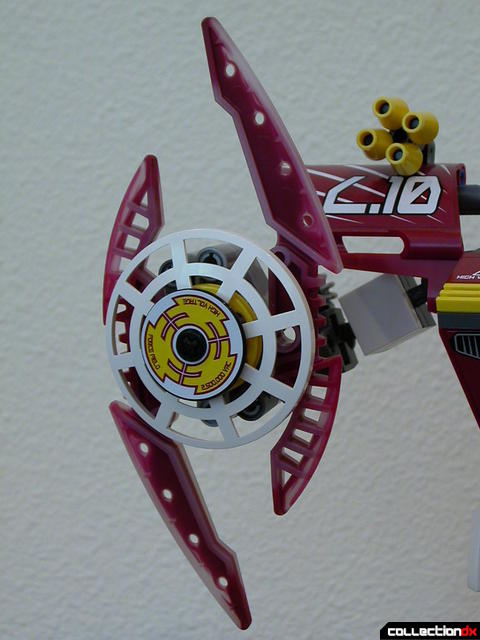 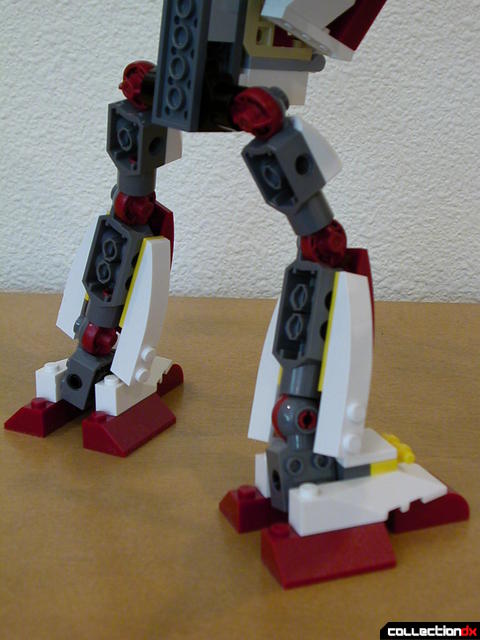 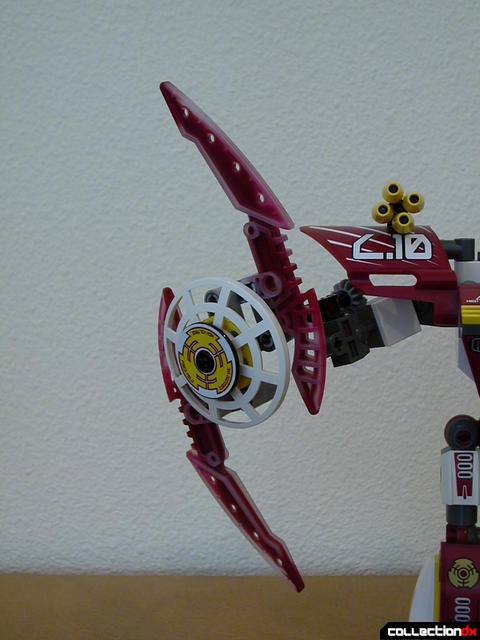 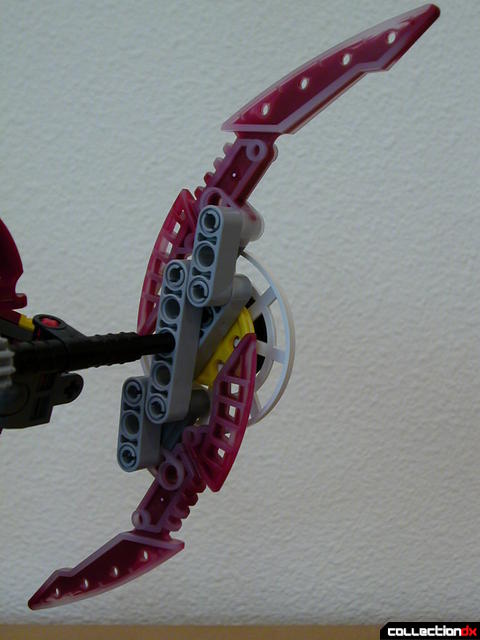 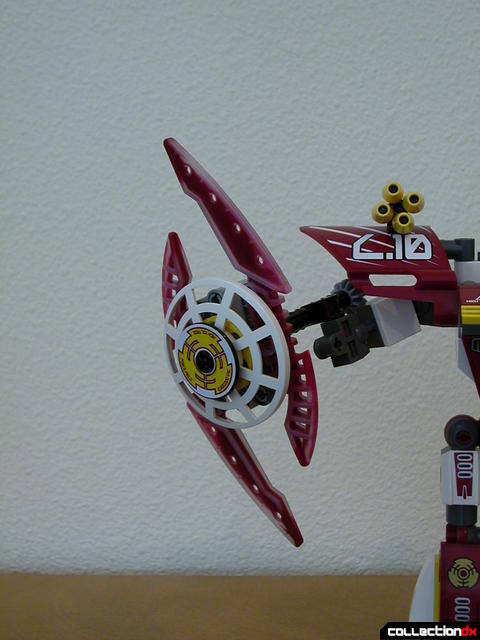