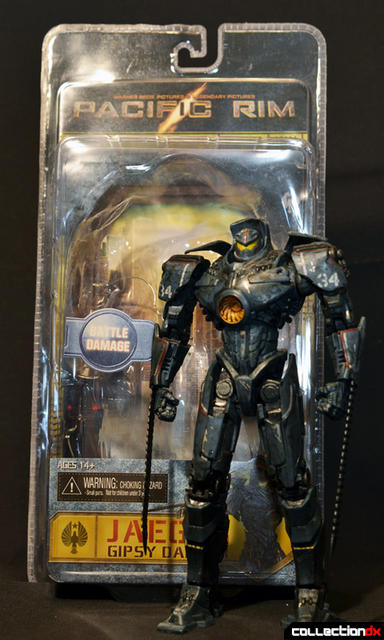 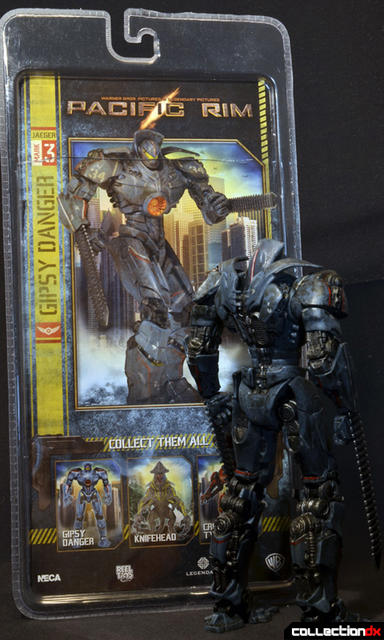 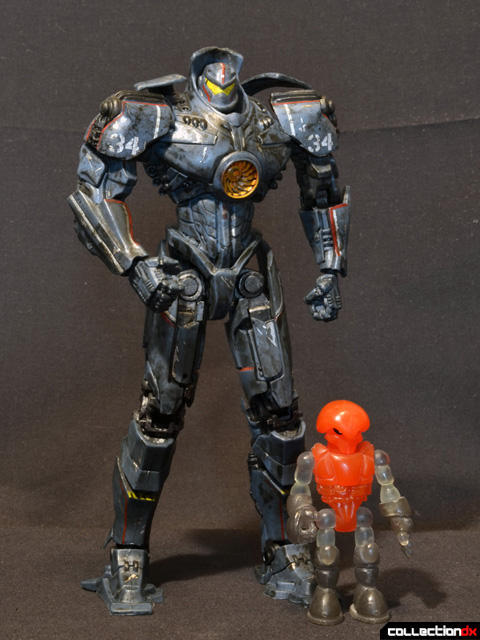 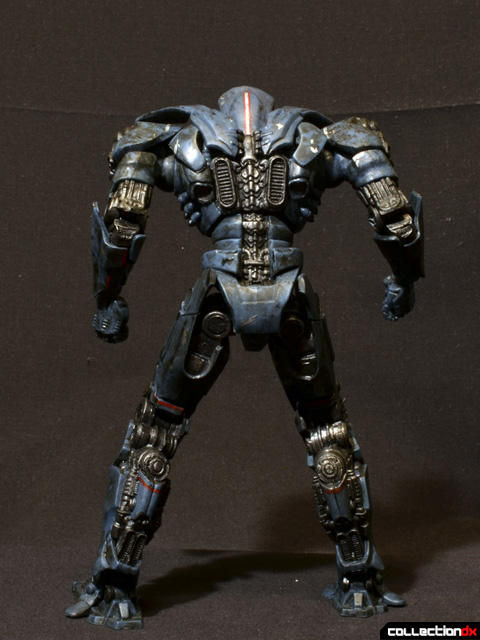 Gipsy Danger is cast in dark blue plastic with black and silver mechanical details and covered in a thick layer of black wash meant to represent grime and battle damage.  The wash is thick, gloppy, and unevenly applied.  The whole toy is made of slightly gummy PVC plastic, making the details thick and clunky. 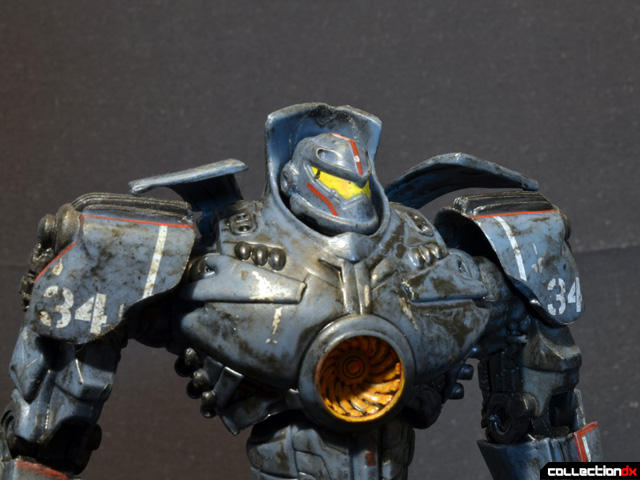 The face is pretty well painted this time around, much cleaner than the Wave 1 Gipsy Danger release.  Most of the red trip and the white printed markings are cleanly applied, with any errors covered by that thick black wash. 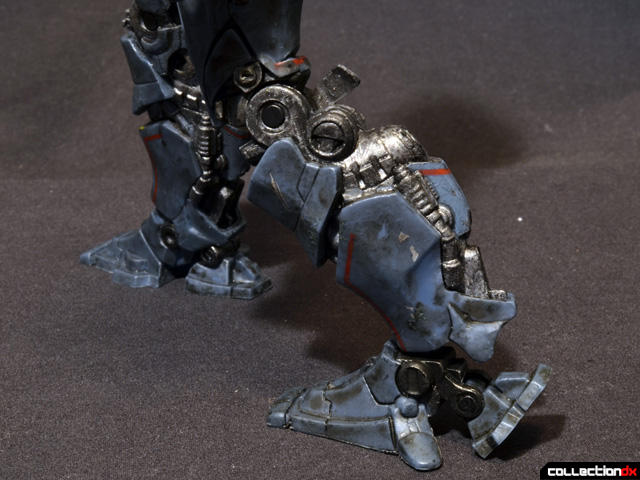 The mechanically details are convincingly painted with a silver drybrush over black.  There is some slop around the edges, but again, much can be forgiven thanks to the heavily washed and weathered look of this version. 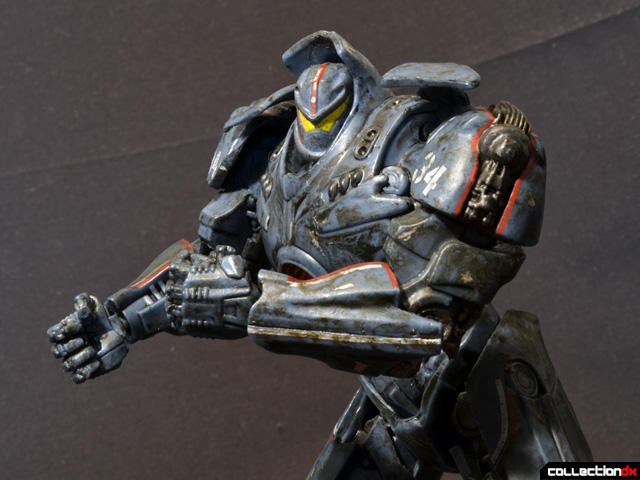 Articulation is exactly the same as on the first version.  The shoulders are still hindered by their sculpt and the detail on the back, and most of the other joints have similarly limited ranges of motion due to the sculpt.  Still, Gipsy looks good with those big meaty kaiju-punching fists. 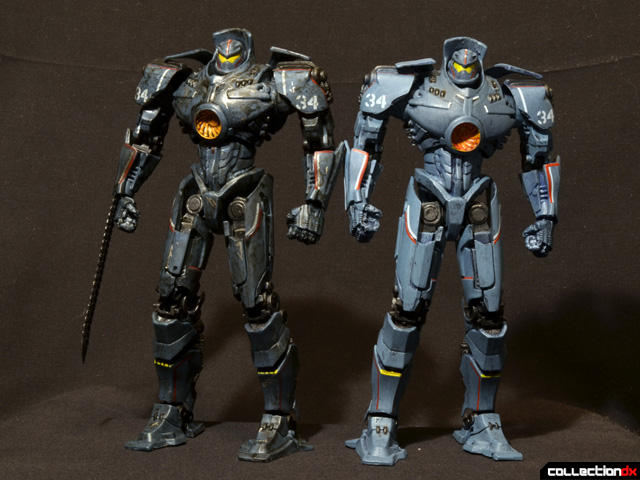 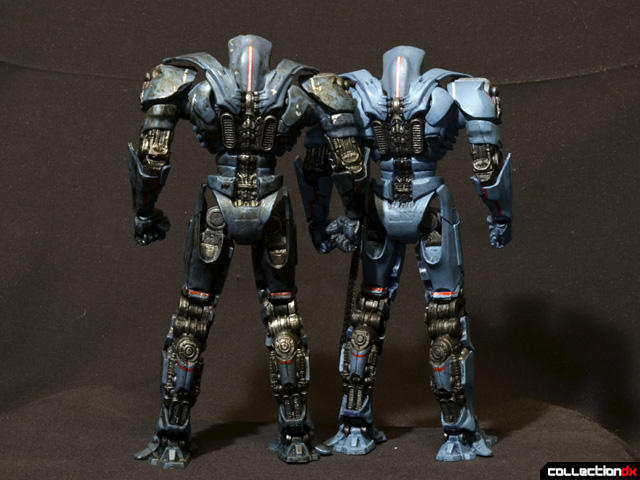 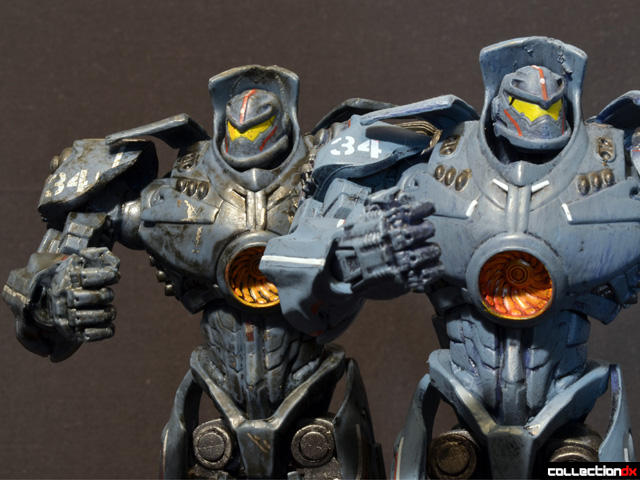 The only other difference besides the paint between the two versions is on the wrist.  The battle damaged version has a slot near each fist for the new swords to attach. 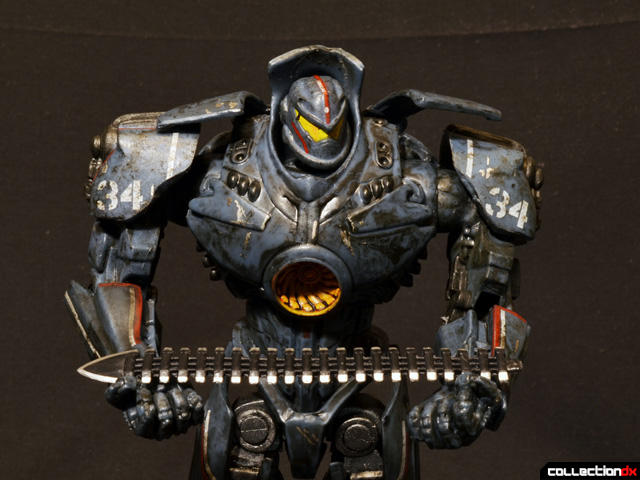 The swords are made from a softish black plastic with silver paint cleanly applied to the cutting edge. 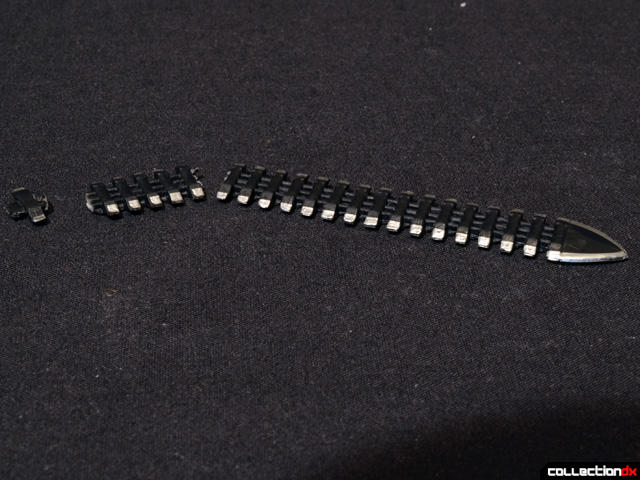 Two swords are included, but one of mine broke almost immediately.  The tabs on the swords that slide into the forearm are not very snug, and while trying to make sure the sword was secure, it buckled and broke into multiple pieces.  The plastic was much more brittle than I was expecting, so be careful if you decide to pick one up. 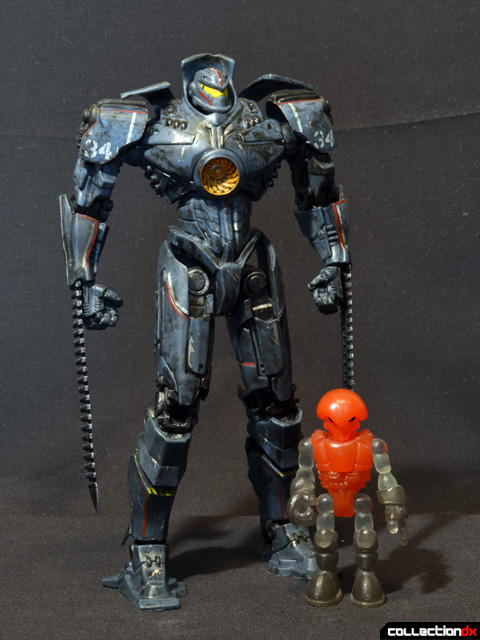 The swords do add a certain level of battle-readiness to Gipsy Danger.  They certainly made for one of the more dramatic scenes in the film. 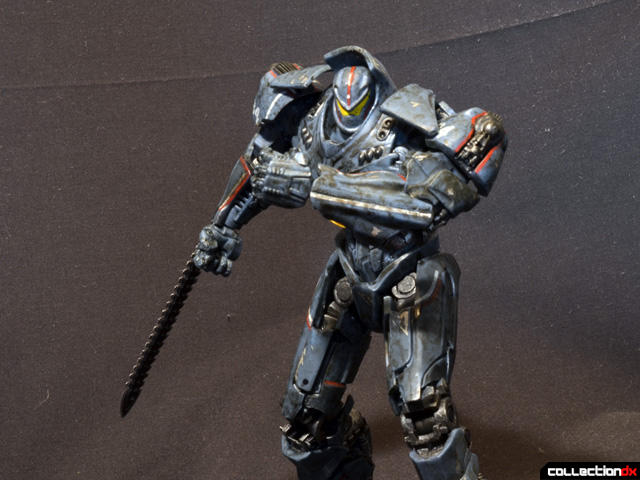 With the shoulder limitation, Gipsy can only do so much with those swords, but the toy can still do some pretty great poses.  Unfortunately, the swords also do not fit very securely, so I had to reattach the one remaining blade after pretty much every pose. 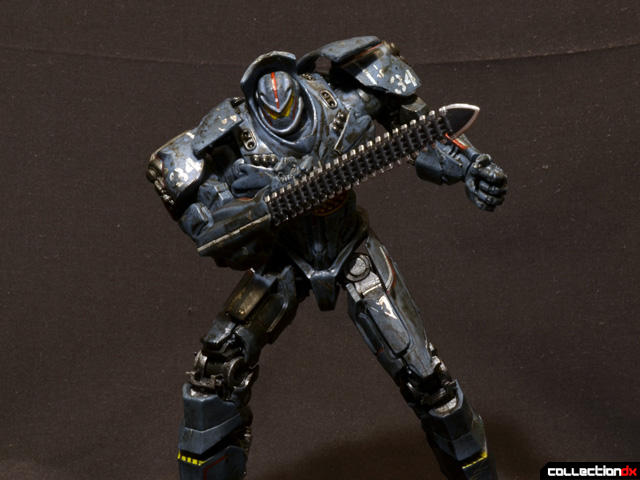 Gipsy Danger looks great doing these down low shoulder-tackle poses.  By leaning the figure over more, you can get around the limited hip motion caused by the armor plates there. 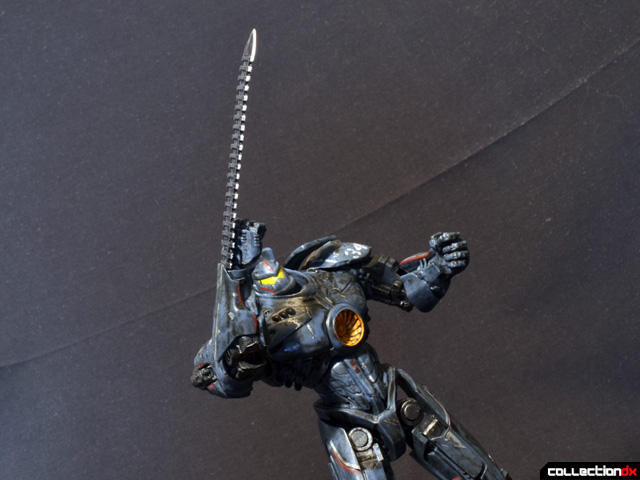 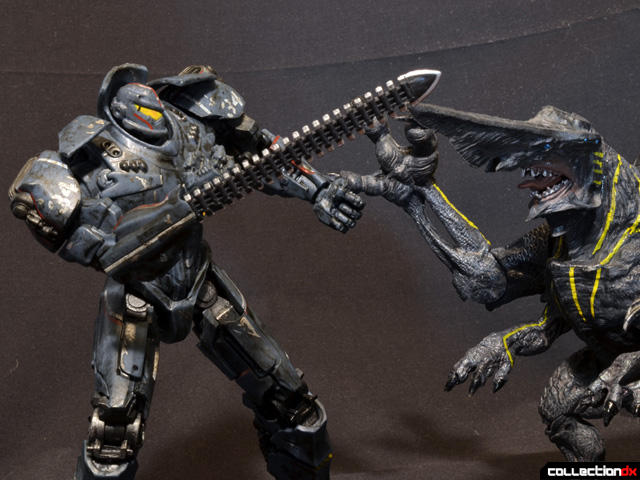 You can’t have a battle-ready monster killing jaeger toy without posing it with its kaiju foes!  Putting the (relatively) dynamic Gipsy Danger figure next to Knifehead makes it that much more obvious how static and poor the kaiju figures in the line are. 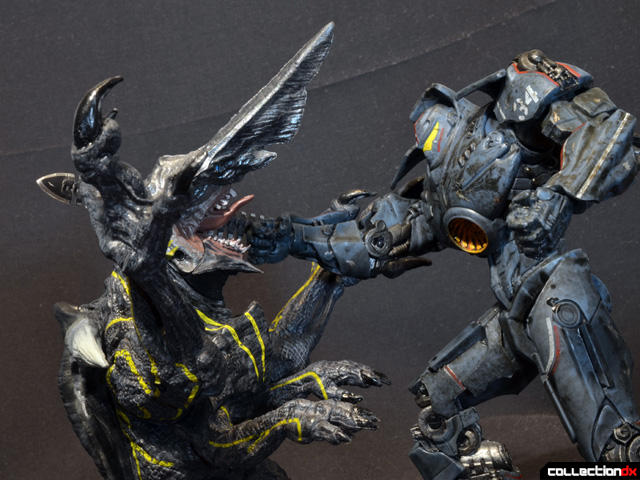 NECA’s Pacific Rim toys retail for $18.99 each.  Action figure prices have crept up quite a bit in the past few years, but twenty bucks for a mass market figure is not an insubstantial amount of money.  For twenty bucks, the paint should be better and parts of the toy should not break out of the box.  The original Gipsy Danger figure sold out almost immediately and commanded high aftermarket prices in light of Pacific Rim’s popularity, and in general, the Battle Damaged Gipsy Danger is a decent substitute.  Still, the weathering is ugly, the articulation is not great, and parts broke.  Pacific Rim fans (myself included) have been eating these toys up because there are no alternatives, but action figure collectors deserve better.

Wave 3- consisting of Cherno Alpha, Coyote Tango, and Trespasser (the Kaiju that attacked San Fransisco)- promises to have upgraded articulation and sculpt due to fan demand!

I have them preordered because I will buy Cherno Alpha toy that exists, but I have no expectation that Wave 3 will be any better than what we've seen so far.

Coyote Tango and Cherno Alpha were my two favorite designs, so I suppose I should be happy they're coming out after they've had a chance to practice on Gipsy Danger.