Avatar is not the story of the Last Airbender. That was the cartoon. This is James Cameron's Avatar, his latest big budget extravaganza. People are anxiously awaiting this movie, due out in December 2009. Me, I have mixed feelings about it so far, from viewing the trailer. We'll see.

In anticipation of the release of the film, Mattel sent out a bunch of sample toys to us to take a look at. I had been eyeballing this powered suit so their timing was good. 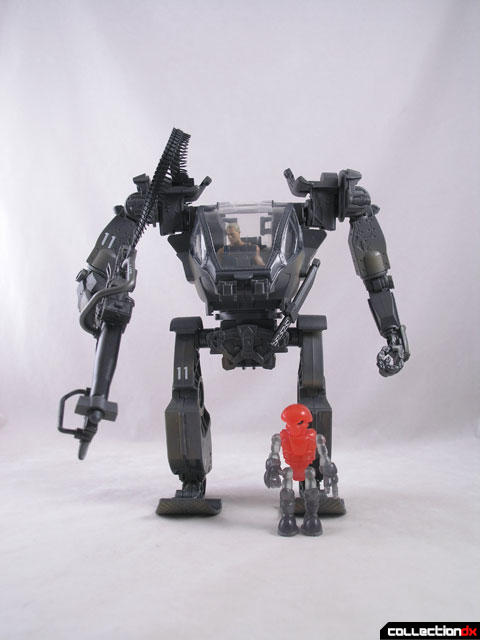 The main gimmick of the Avatar line is the iTag system. The iTag system enables you to have a 3D model of the toy you bought on your computer. But it is not just any model. The iTag system uses a webcam to detect the iTag included with each Avatar toy. Once it locks on, it displays a 3D model of that toy on your screen, on top of the tag you are holding. Turn the tag and the model turns. Tap the info square and an information block appears. It is very, very cool. 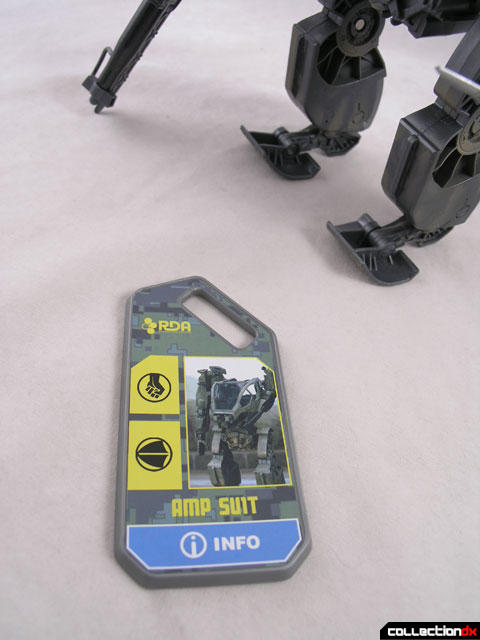 To use the iTag system, you must first go to http://www.avataritag.com and download a small application. Once installed, it runs in the browser and allows you to interact with the website.

The iTag system is worth the price alone. But the powered suit is not bad either, and for $20 bucks you can't go wrong.

The name "AMP Suit" is short for "M-6 Amplified Mobility Suit". In the movie the AMP Suit is 13 feet tall and six feet wide, with verbally activated cockpit commands, hip mounted 30mm cannon, flamethrower and slashing knife. The toy however is only 9 inches tall, and does not shoot flames. 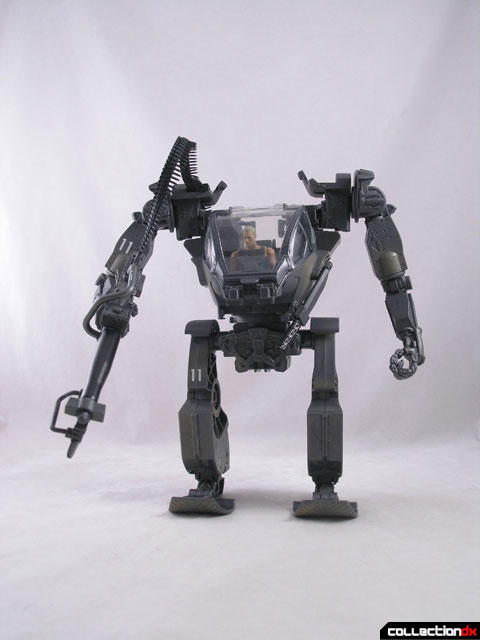 The box is interesting. It's heavy cardboard and an odd polygonal shape. It looks as if a toy like this would not fit inside, as the box is only 2.5 inches deep. The trick is that it's in a bunch of pieces. 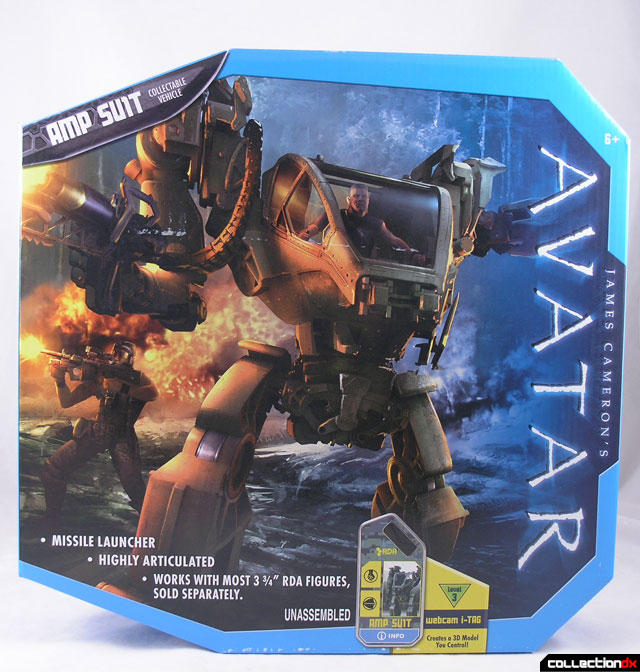 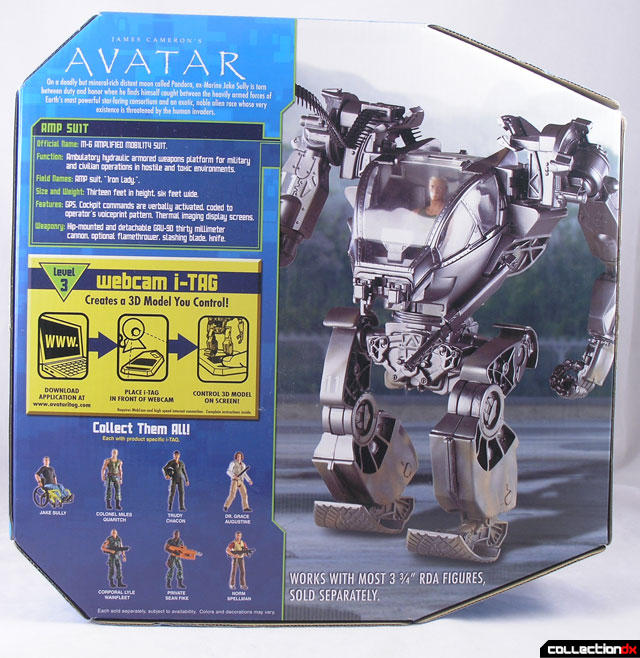 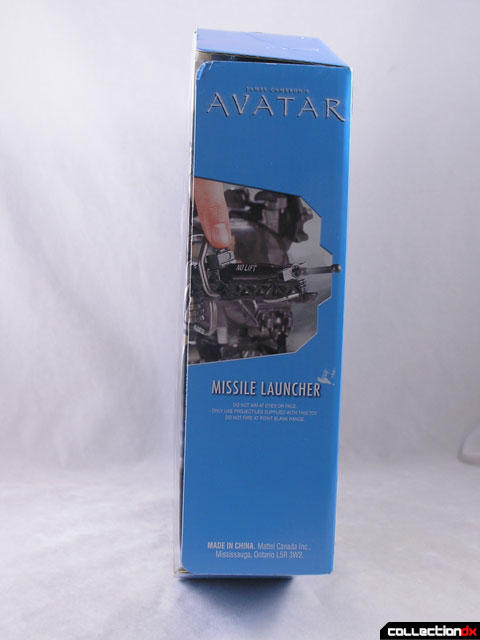 To say some assembly is required is an understatement. You have to attach the cockpit cover, torso, arms, legs and cannon.

Once assembled, you've got an honest-to-goodness solid, playable TOY. It's a lot of fun. 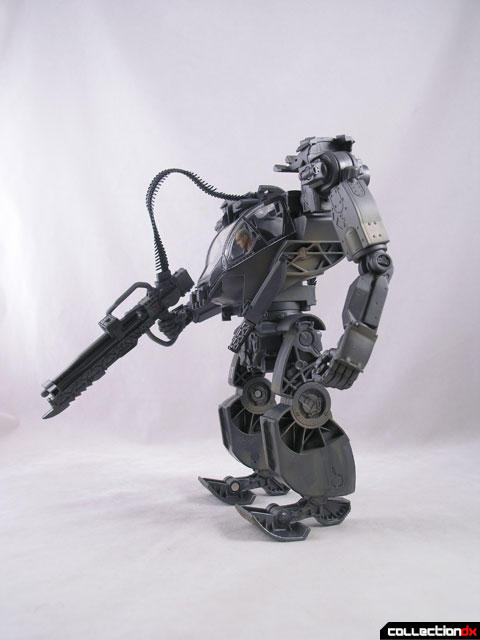 Oh - the pilot figure is not included. I'll review him later.

The cockpit of the AMP suit looks a bit like the front of a helicopter. The clear canopy can open and close. Inside the cockpit there is no painted detail, no stickers. any 3 3/4 figure should fit in just fine as you just stick the figure in a hole - you don't bend the legs. There's nothing for the figure to hold on to, but once again, TWENTY BUCKS. 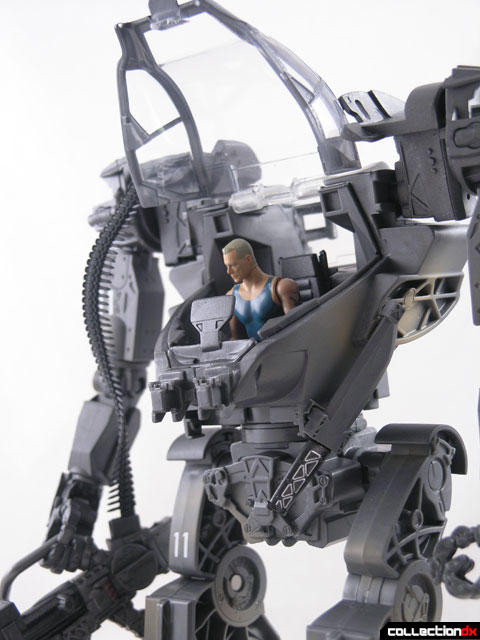 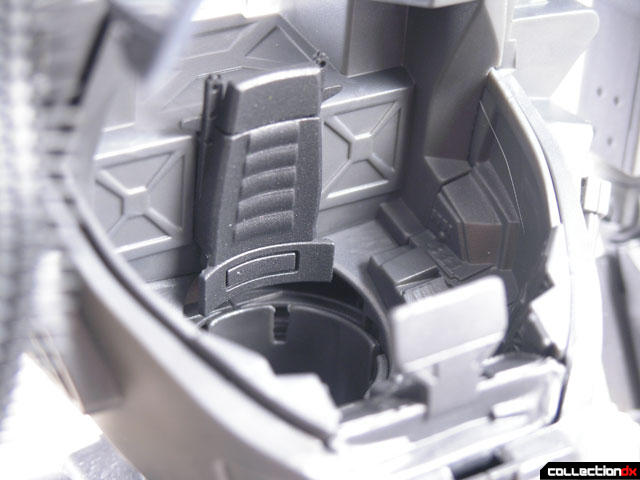 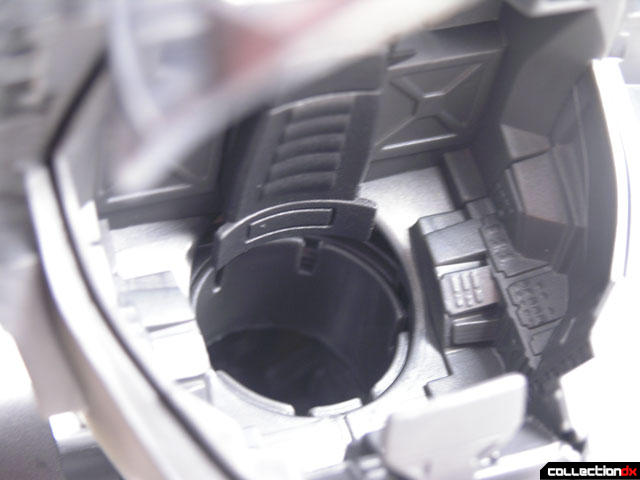 The shoulders each are on a long curved track that allows the arms to slide backward. Unfortunately, they do not "click" in any position so they have a tendency to move on their own. The shoulders are detented, and they also have a hinge that swings out. Above the hinged elbow is a swivel joint, and the range of motion is pretty good. The hand is hard rubber and only swivels at the wrist. The hand details are a bit mushy. 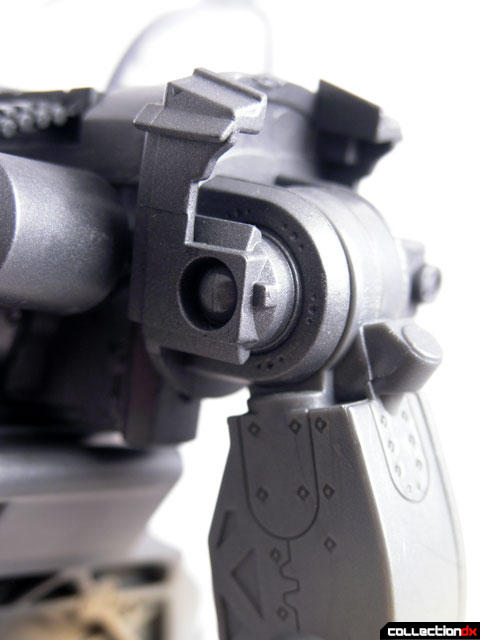 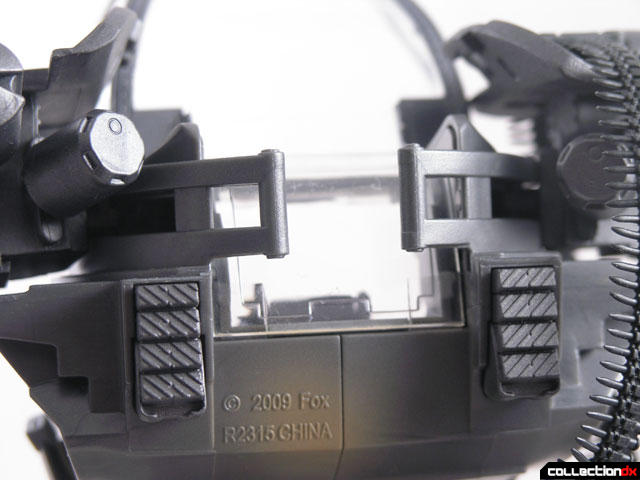 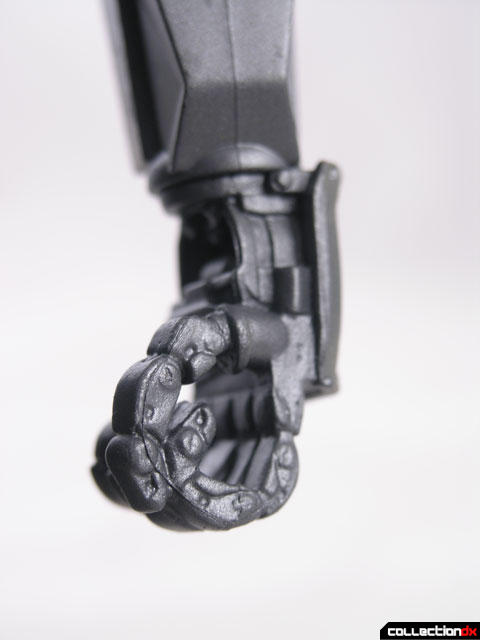 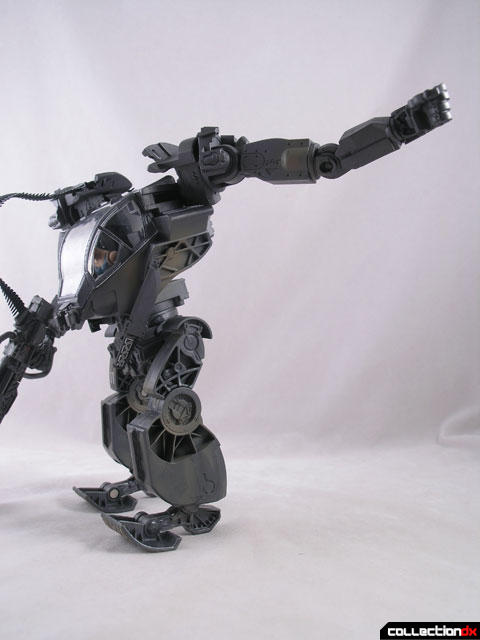 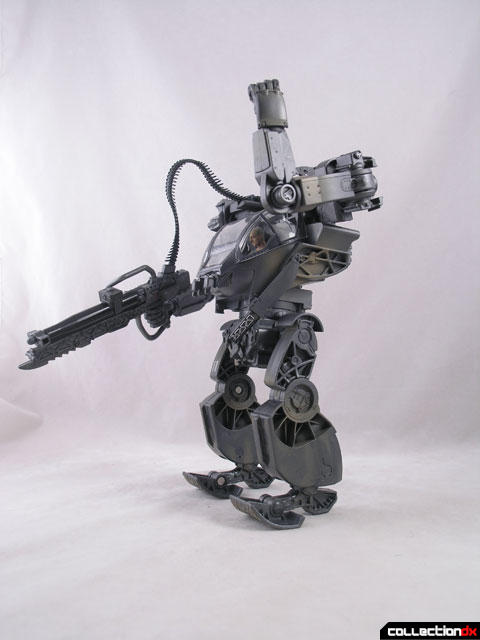 The top half can swivel at the waist, but motion is restricted by the attached knife and holder. Why a giant powered suit needs a big crocodile dundee knife is beyond me, but whatever. The knife can be removed from the holder and placed in either hand, but you have to place it just so else it will fall right out. The hips are solid detented joints, the knees are simple swivel joints. The feet bend at the ankles and then there is another joint at the toe. 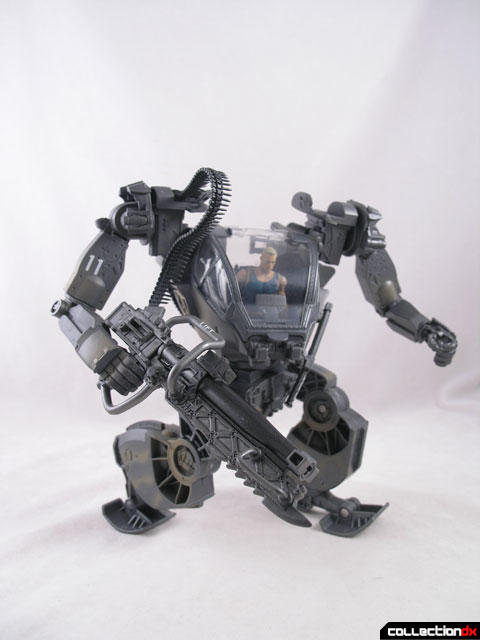 The big gun that comes with the toy is actually pretty cool. First, there are rubber ammunition belts that clip into the gun and the back of the body. On the gun it looks like it can clip in two positions. While you can remove the gun from the hand, the ammunition and clip are permanently attached to the figure. The gun is nicely detailed, and big, with several places to hold onto. The main gimmick with this gun is that it is a missile launcher, but the launcher is weak and the thing only comes with ONE missile. Also, the AMP suit has a loose grip on the gun. 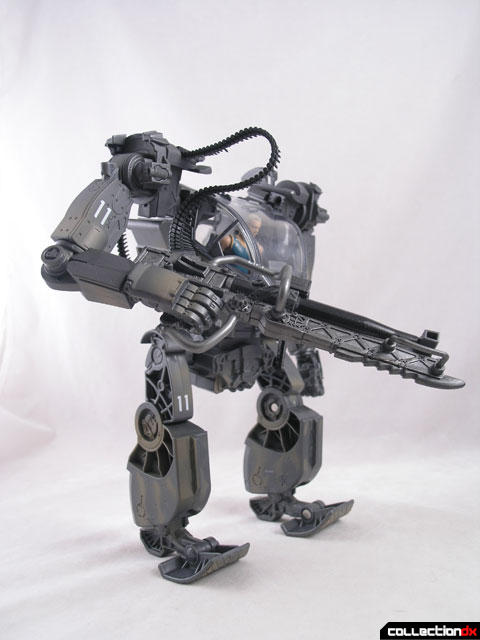 It may sound like I am complaining here, but I really am not. Keep in mind, this thing was $20. It's a toy, it's gonna have a few minor flaws, and kids won't care. Collectors may bitch and moan but you just know a company like Hot Toys or Aoshima will make a high-end gokin toy of this. But it is fun to play with, looks good, and the iTag gimmick is fun. The 2009 films "Star Trek" and "Transformers- Revenge of the Fallen" also have interactive-webcam features on their sites similar to this. I haven't use them yet myself or know all of the details, but for the former they give in-depth cutaways and animations of the remake-Enterprise; while for the latter your head is surrounded by a virtual helmet of movie-Optimus Prime's.

I think this is a whole new(?) level of entertainment on the way which Hollywood has just tapped into.

Whoo! That iTag demo is mind-blowing. I was impressed enough that the airship had moving parts. Moreso when I noticed that it was casting a shadow on your fingers. But that AMP suit running around (and off the tag!). Yowza.

The only big drawback is the orientation. Top-down works okay for the airship, but looking down on the AMP suit is a problem. The natural instinct is to get it upright...which causes the image to cut out. Heh.

Cool to see you give the toy a fair shake, without all the ridiculous baggage this movie is getting. I was lucky enough to catch the IMAX 3D extended preview thingie. Without any prior knowledge, I enjoyed it. The 3D was cool, character models looked great, and the story looked like fun. It's not Shakespeare. And it's not breaking new ground thematically. I get to see robots and nature try to stomp each other. Since I love both, I don't care which one wins. ;-)

I think If I had a different webcam and the table space, it could work on a flat surface. I just didn't have an ideal setup.

My first reaction was, "If only you could point your webcam down at a table, then put the tag there." LOL. Dur. The 3D model would still be a top-down view. Bad idea. With no glare, though, I suppose you could get nearly a side-on view if you placed things right.

I guess one solution might be a tag with a hinge. The ID part hangs down, but you hold the rest level in your palm or fist. Then the 3D model appears in your hand.

Current system works fine for the airship, but that AMP suit needs to be seen from the side. Still really, really cool.

The iTag system is actually just an application of the ARToolkit software library, which itself is a free download to anyone who wants to try it. Japanese artists have been experimenting with it for over a year with somewhat predictable results.

I picked one up a week ago, and it's a great piece that came out of nowhere. Very reminiscent of something from Exo-Squad or the latter years of GI Joe.

What I really liked about it was that you have to put it together, just like toys use to be. So often now everything comes pre-assembled in a big window box, with 200 twist ties and 5 lbs of cardboard keeping it in place. This is a great throwback to the old GI Joe vehicles that you had to put together, practically a model kit that gave you a little more enjoyment and anticipation while you built the vehicle.

It's also scale with 1/18 figures so a DMZ Scopedog or GI Joe can take it on. The toy also is prime material for customization and army building. I can see some folks going SF3D with them and making all kinds of variants with it.

Much agreed Duke! I think there is a lot of customizing potential with this figure, the rivet and details are just begging to be airbrushed and washed with oil paints.

There is a bit of throwback to American toys from the 1980's on so many levels with the 1:18 scale and the "some assembly is required" aspects. Looking forward to more reviews.

So, it sounds like I will have to pick this up... the price point is pretty fantastic, and it DOES look like a good ol'-fashioned robot figure. It definitely IS begging to be repainted, but out of the box it still seems to tickle that robot loving really well.

Both toy and tag are simply awesome. Thanks for sharing, Josh. As for the movie, it reminds me of Blue Submarine Number 6. Besides I'm glad to see Lady Sigourney Weaver again.

I've been looking at these toys, (mainly to get an impression of what the movie is about,) and while I love the box art, the lack of any demonstrable toy indicating size, detail, etc..., has kept me from plunking down. Now that I understand it's a classic, 70's/ 80's style packaging, I know I'll be snagging these early for Christmas.

Duke, you make a great point about the experience of building a new toy. Kenner Star Wars was always a fave for that reason. Plus there seem to be some seriously groovy monster toys for "Avatar" as well. I think these things are going to disappear when people finally see the movie.

I know that feeling of putting together 80's toys! remember those HUGE sticker sheets that hasbro and kenner put with their toys and spending all night putting them on? The Sky Striker and S.H.A.R.K. sticker sheets are legendary!

"...And you thought web-cams were just for looking at girls takin' it all off, ehh?"

and maybe if you yell loud enough, the clothes just fall off.

its 7pm and I was ready to just lay down, but darn it Josh, now I have to get dressed and go to TRU and pick this up, thanks alot

ok just got back, I put it together and totally just spent 20 minutes messing around with the tags. damn cool.

The toy itself is solid, the way it should be... and pretty heavy. good flexy plastic so it wont break.

I also bought a quartich figure which is nice. Whats nicer is that it is perfectly in scale with my DMZ-02 Strikedog! he fits in there as if he was made for it! That way I dont have to pull Ypsilon out! Im happy. Total damage for these 2 items: $32.09

Thanks for the review. I would have never known about this

It warms my heart that my review made you run out and get one, literally. This is why I do this. You made my night, thanks!

this isnt the only review that made me do this... I started out with a collection of Voltrons and since finding CDX a while back, I cant find storage space for anything! Its one thing to see a picture in a website, but when someone gets into detail and gives opinions on the toy and its playability, its hard to resist.

That video review has just too much technology in it for me... the crazy 3D robot thing, webcams, vid cams, telephone's ringing, twitter's going off, a stapler... I can't say I'm terribly fond of the toy, but this review did make me want to see the movie more.