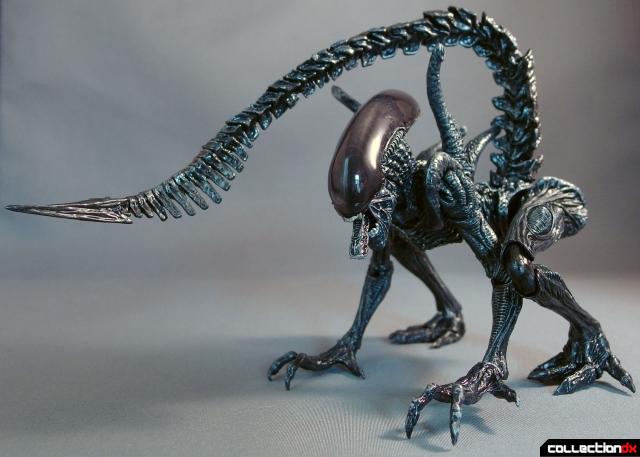 NOTE: This figure was provided for review by Bluefin Distribution.

It's always funny to remember how, when I was about ten years old, I desperately wanted an Aliens toy and there was nothing to be found. I once saw the Kenner Alien - MIB - at a flea market, and I begged my parents for it. While my parents were fairly indulgent (I got Fortress Maximus for Christmas one year), the $200 price tag on a monster toy based on a rated-R movie for their ten-year-old kid was evidently a little much. The best we ever came up with was a tiny beige plastic figurine, presumably a part of some roleplaying miniatures game, that had to be glued together and was ultimately a complete piece of crap. I can still remember the sensation of disappointment with that thing.*

By the time Kenner started producing their Alien vs. Predator figures in 1992, I had moved on to other interests, but I did pick up the excellent Alien vs. Predator 2-pack. The Kenner line lasted until 1998, and then Aliens figures would vanish for about six years before making a big comeback via McFarlane Toys. I bought a few of those, such as the Alien vs. Predator 2-pack (again) and the Warrior Alien. They also made a bunch of figures based on Alien vs. Predator, including the same character as today's review. I also owned an Alien figure from Aoshima, and Hot Toys has made a few 12" Aliens. But the gold standard in the sub-12" scale over the last few years have been the excellent offerings from NECA, particularly their more recent work, such as the Xenomorph Warrior. NECA's figures always have a great sculpt and they have made a strong effort to add a lot of articulation to their more recent figures, so when Tamashii Nations announced they were producing an S.H.MonsterArts Alien Warrior, many collectors thought, so what? Let's see what Tamashii's attempt has to offer. 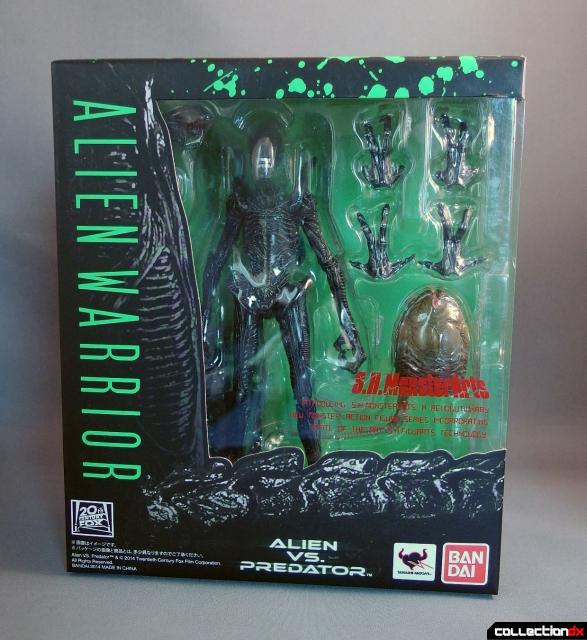 Packaging: The S.H.Monsterarts line has occasionally featured boxes with no windows to the figure, so it's a relief to see one here. The Alien is secured firmly within the tray inside the box, and it's easy to put everything back in and put him away. His tail comes separately and has to be snapped on the ball joint. The packaging has a toxic-green-slime motif that's quite different from the Alien vs. Predator marketing materials. It's an interesting look, and as a fan of toxic-green-slime, I like it. 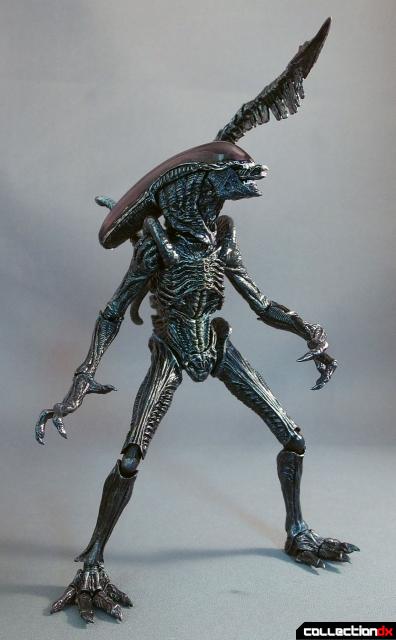 Design & Sculpt: This is not one of my favorite Alien designs, but that doesn't mean the sculpt isn't good. Quite the opposite in fact - there is an immense amount of detail packed into this figure. It's easily on par with McFarlane's or NECA's work. But sculpting is rarely an issue with S.H.MonsterArts. 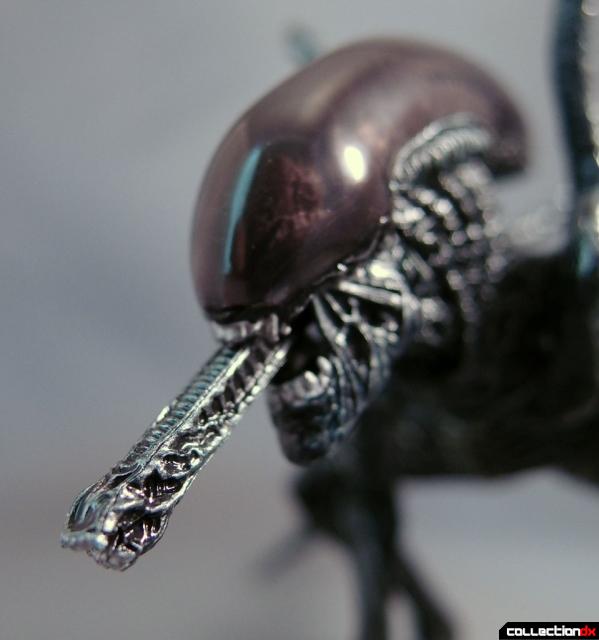 The figure's "dome" is clear and dark, but when held properly to the light you can see a fully-detailed sculpt beneath. 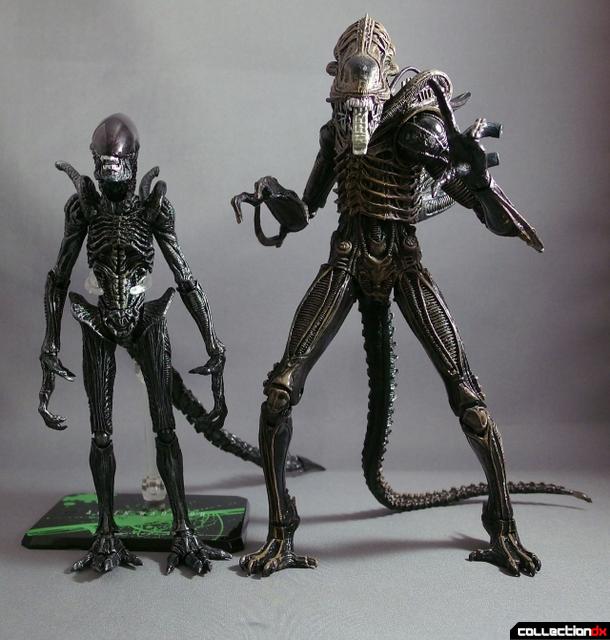 Probably the most important thing to talk about here is the size. S.H. MonsterArts figures are always smaller than I expect them to be. The Alien Warrior is 6.7" tall, which may in fact be accurate to the movie (they vary in height throughout the films, but they're usually not much more than 7'). But for those who thinking of Aliens as being larger than humans, it's going to look small next to standard 6" figures and really small next to NECA's figures, which are in a 7" scale (meaning NECA's Xenomorphs are a towering 9" tall, as you can see in this photo from ItsAllTrue.net). 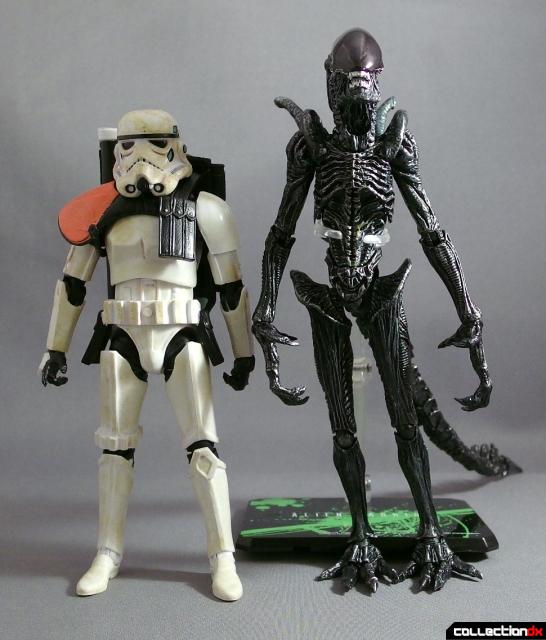 As you can see, he's actually taller than the 6" scale Star Wars Black Sandtrooper, which is relatively accurate to the film's depiction of its height. However, I understand collectors who expect Aliens to be big, and this isn't going to feel big alongside those figures. And it's obviously really small next to NECA's Marines: 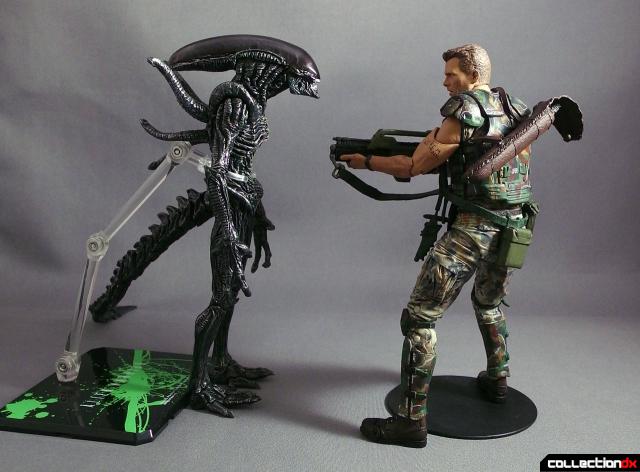 So if size is really important to you in your Aliens action figures, be advised, this figure is probably going to be a little smaller than you're expecting it to be. It's arguably in a true 6" scale, but it's slender. I expect this will be a dealbreaker for many collectors, especially at this price point. However, the figure has other important virtues, which will be discussed below.

Plastic & Paint: The Alien Warrior is produced in what feels like a harder plastic than, say, NECA's figures, with a lot of the joints being separate parts made from ABS plastic. This means you don't get any of the stuck joints you run into sometimes. But what I really like here is the paint work. I'm aware that the brown coloring on NECA's Xenomorph Warrior is accurate to the film, but it doesn't look right to me. The blue-highlighted ones don't look right either, however. I've always preferred either straight black or black with silver highlights (as seen on NECA's excellent Alien Vs. Predator: Requiem figure). Tamashii opts for black with silver highlights and the result is superb. 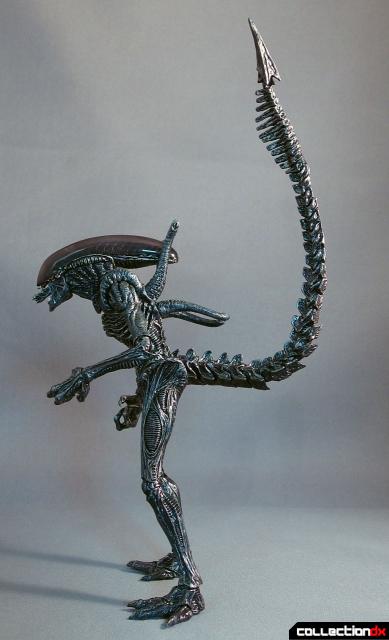 The silver really pushes the bio-mechanical aspect of Giger's original design. It also does a good job of bringing out the details of the sculpt. The only place where the paint work isn't spot-on is the teeth where the paint is just a little to thick and could use a touch of a wash.

Articulation: This is where the Alien Warrior blows away every Alien figure before it. As much as I love the NECA Aliens, their articulation always leaves me wanting a bit more. The biggest issue for me are the hips - even on the most recent figures, the hips can't really move much higher than a 45° angle, so true squatting poses aren't an option. That's because NECA starts with sculpt and then does its best to work as much articulation in as possible. 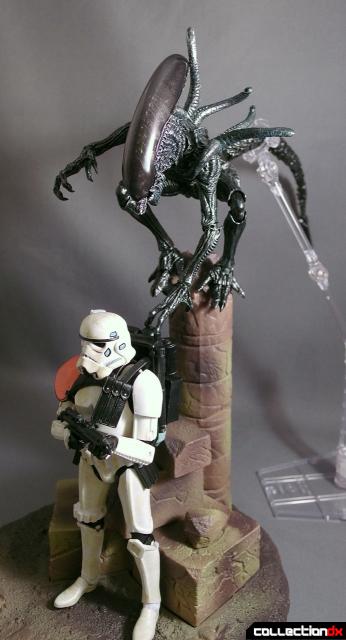 I think Tamashii's designers comes from the other direction, trying to work in as much articulation as possible before moving on to sculpt. The result is extremely impressive. I'm an articulation junkie, and I found it immensely satisfying to be able to put the Alien Warrior into full squatting positions as well as stretched-out to its full length. 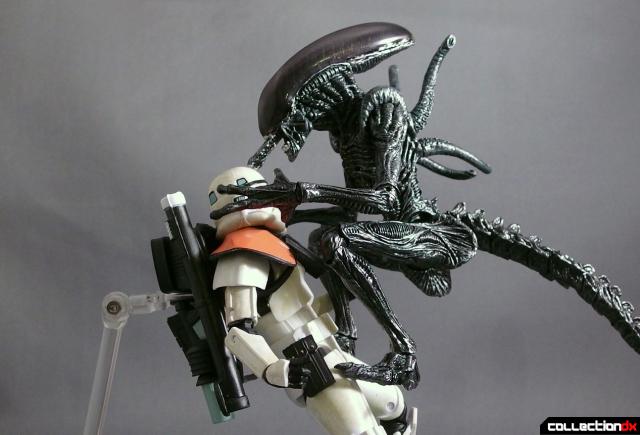 A full accounting of the articulation would be almost difficult to figure out, but here are some of the highlights. The head has multiple hinges so that it can be all the way forward and low, or high up on the back for crouching, four-legged poses. Each of the "tubes" on the back is on a ball joint (possibly just to allow for some leeway to prevent breakage than anything else). The torso and pelvis are ball joints. The elbows and knees are double-jointed, and the hips are double-ball-joints. The shoulders and wrists are ball joints, the ankles are ball joints and even each individual toe is on a ball joint. 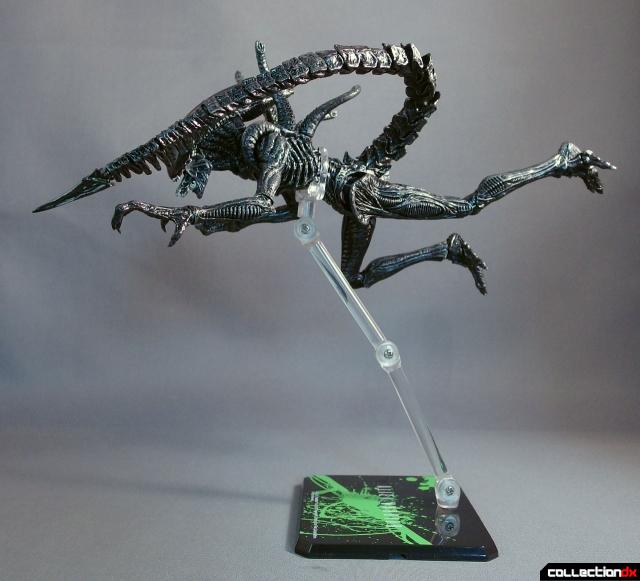 The tail has a number of ball joints, while the tip is diecast metal. Due to the bony, vertebra-like nature of the tail, there's some space between each joint, which doesn't allow for the tightness that something like Godzilla's more worm-like tail allows, so the tail does have a tendency to sag a little bit depending on the pose. However, I've had the tail in an over-the-shoulder pose on my desk for over a day now and it's still in the air, so it's possible to work the tail into a position where the segments are close enough together than it remains in the air. The jaws open of course, and the inner mouth is fairly long compared to other companies' releases. It's loose as well, so if the mouth is open and facing downward then the inner jaw will be out. When you're holding it in your hand and moving its limbs around, the figure feels very loose. Parts rattle a little bit. However, once you get it into the pose you want, it settles in and holds it like that Gargoyle Gremlin drying into concrete in Gremlins 2. 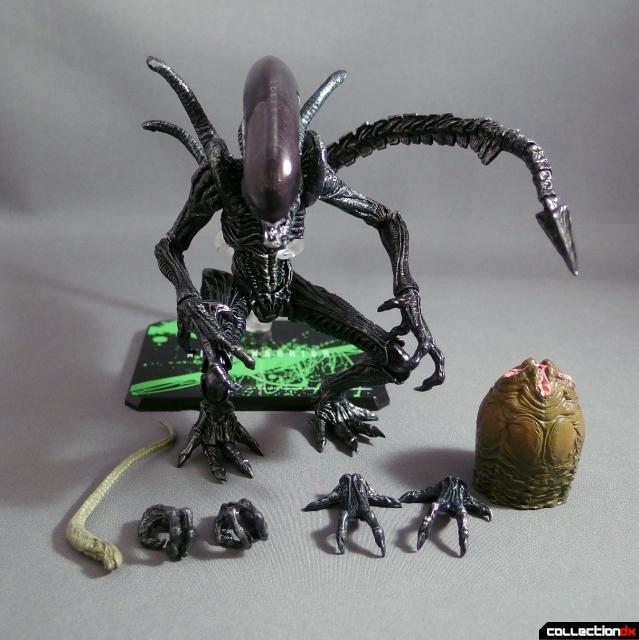 Accessories: The Alien Warriors comes with two extra sets of hands, a display stand, an egg, and a chestburster. In the films the eggs were about three feet tall, so this thing is simply too small for the scale. It's also just a solid hunk of plastic, with no features. 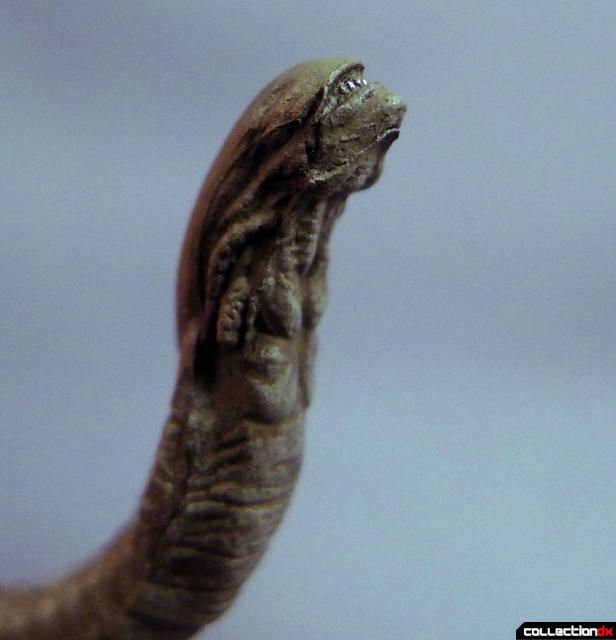 The chestburster might be more in scale, but it can't even stand up on its own. While I always applaud the inclusion of extra accessories, both of these seem a bit pointless. The extra hands are a different matter, of course. The are three sets: an open, flatter set for four-legged poses, a "reaching out to grab you" set, and a "clutching" fist-like set. The ball joint pegs on the wrists are small but I didn't feel like there was too much risk of breakage after a half-dozen swaps. You'll definitely need the stand for some poses, particularly due to the tail's weight.

Quality Control: Tamashii figures can have QC issues. You particularly need to be careful when swapping parts like the hands. However, I had no problems with my sample. 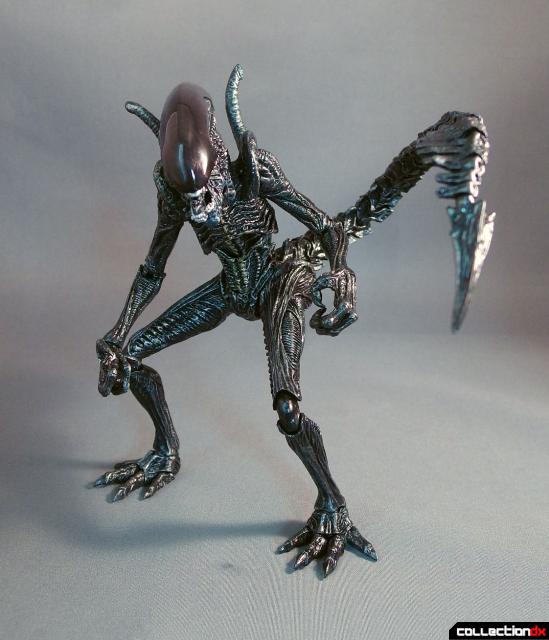 Overall: This figure will run you about $50-$60. That's roughly the price of three NECA figures. I got this figure as a review sample, which raises the important question of whether I would have bought it myself. My answer is probably no until I held one in my hands. Once I began messing around with it, I knew this was my favorite Alien figure I've ever owned (and again, I've owned many of them). The ability to put him into any pose is incredibly satisfying, and makes up for any disappointment I feel regarding the size. Now I can't wait for the recently-announced '79 Alien (who, at 7", will be a tad taller and bulkier than this figure). Whether he's worth the money to you will depend on a number of factors: how much money you have to spend (of course), how dedicated you are to other companies' offerings (i.e., NECA), how important the size is to you, how dedicated you are to the Alien brand, how much you like (or hate) this particular xenomorph design, and how important articulation is to you. I don't think my photos, or most of the photos I've seen online, do justice to how articulated this figure is. Now that I have the figure, I can't wait to pair it up with next month's Wolf Predator (again, not my favorite design, but now that I've seen this figure I'm intensely curious to see how the Pred turned out).

* A ten-minute obsessive Web search for it didn't turn anything up. As I mentioned, it was plastic and had to be glued together, both of which exclude the Leading Edge miniatures game of 1991, whose miniatures were lead and solid.

Top-notch, thorough and strictly objective writing. I'm personally disinterested in the subject matter itself but I was concerned in whether S.H. MonsterArts had delivered a good product for the money it demanded. I'm glad to see that the Alien Warrior is a good buy! Thank you for your contribution to this site.