Highbrow has never been a character or even a design thats really interested me before (probably because of his uptight know it all personality!) but, upon seeing his latest incarnation in Titans return I decided to give him a chance and, i'm very glad I did!

In robot mode, Highbrow looks very authoritative with his trim blockiness and aviator visor but other than that, he is basically given the same treatment as Hardhead, as Highbrow looks basically identical to his g1 counterpart aside from some more surface detail and refined proportions. Despite this, I really like the design here much more than on the original. The proportions do Highbrow a lot of justice, and his articulation only supplements that, as it is just as good as every other Titans Return figure although the transformation doesn't allow for a waist swivel. His Titan master looks really good as well, considering the color choice is pretty appealing and he even shares his head mode's aviator eyes! 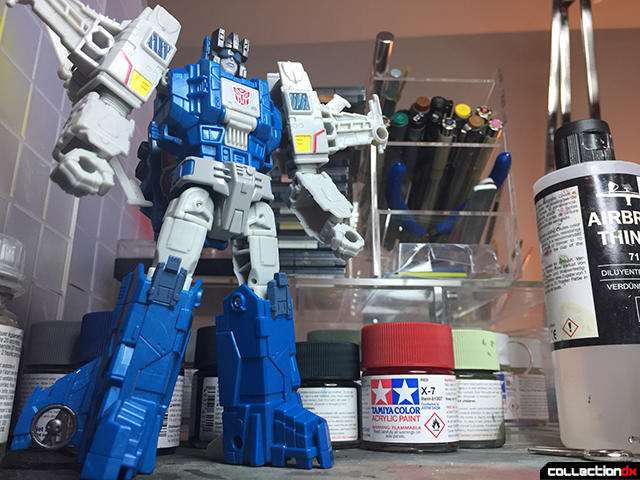 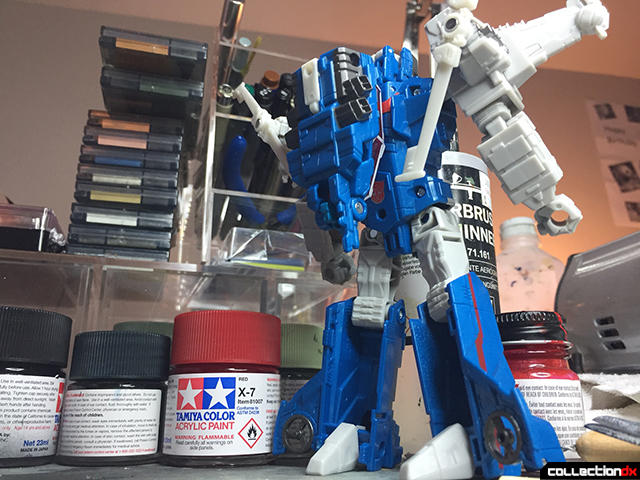 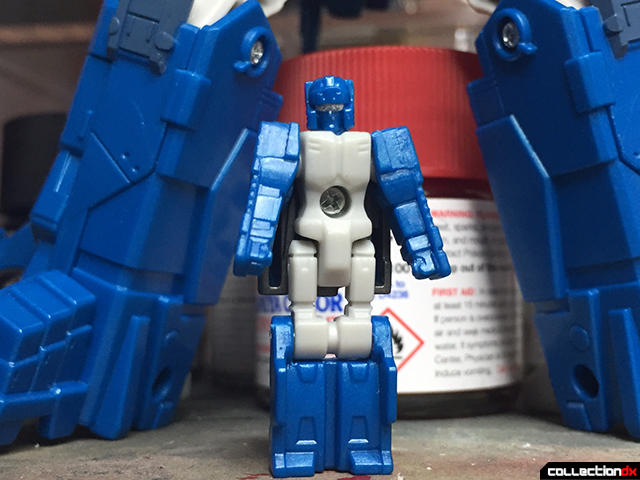 Accessories come in the form of dual machine guns. They are painted in a metallic gunmetal color that looks very striking and powerful. Slightly less cool is their combined form, in which both guns combine to form a double barreled machine gun for a Titan Master to sit in. This sounds great but, Highbrow can only hold them from the sides with both hands. I guess, it would be useful considering the kickback the gun would have, but then again, what do I know! 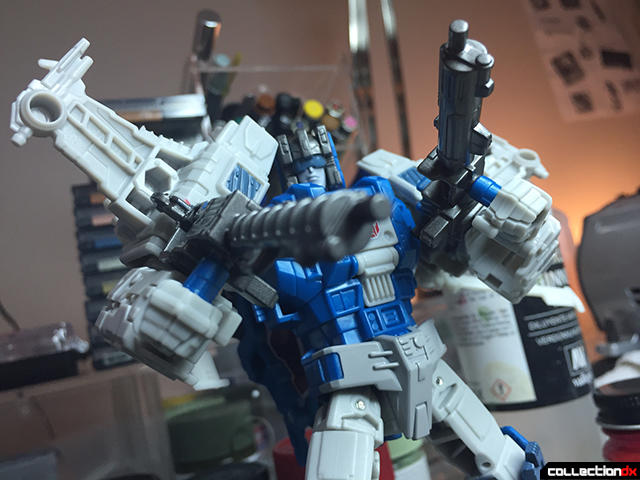 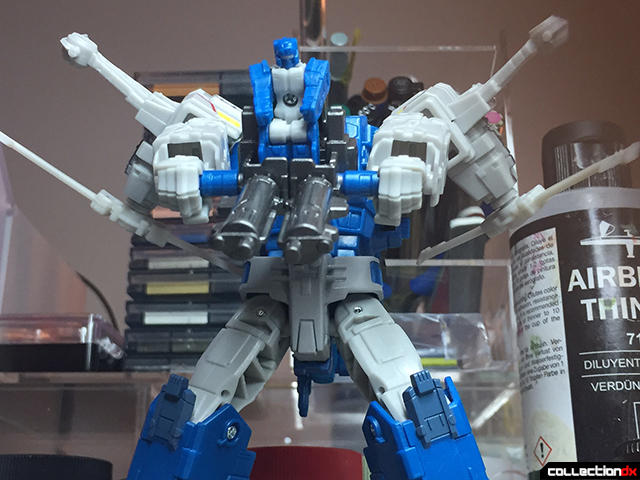 Highbrow's size seems right when compared to other deluxes, that's good considering he'd most likely be sharing shelf space with his other headmaster colleagues. 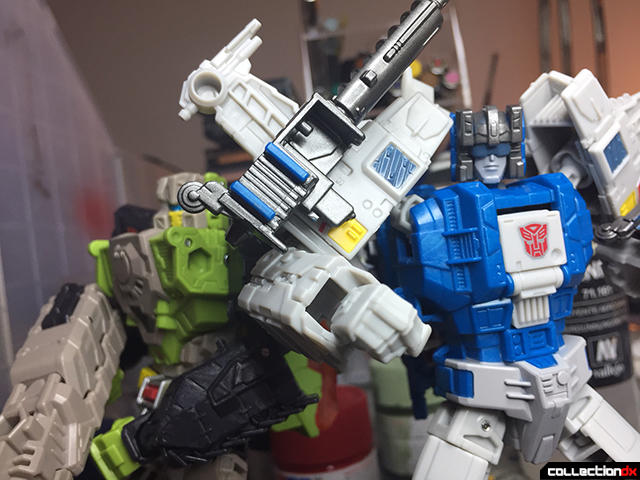 Transformation is logical but kind've boring in it's straightforwardness. He basically just lays down so then the legs can be compressed exactly the same as Scourge's; in fact, Highbrow's heels are just Scourge's feet!

Vehicle mode is actually a pretty neat VTOL like helicopter with a really vibrant translucent red cockpit! The rotors on mine are bent down a little bit but, thats just due to how Highbrow is packaged. His machine guns can be attached to the helicopters nose and wings but as far as I'm concerned, they can't be mounted anywhere special while combined! Really though, I don't care that much considering the Titan Master looks so awesome as a pilot. 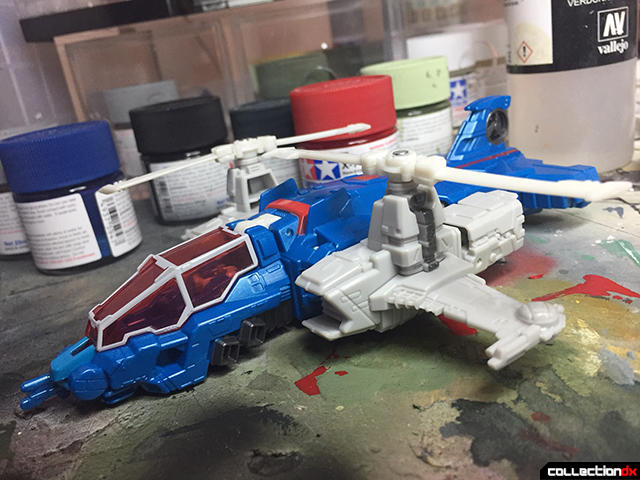 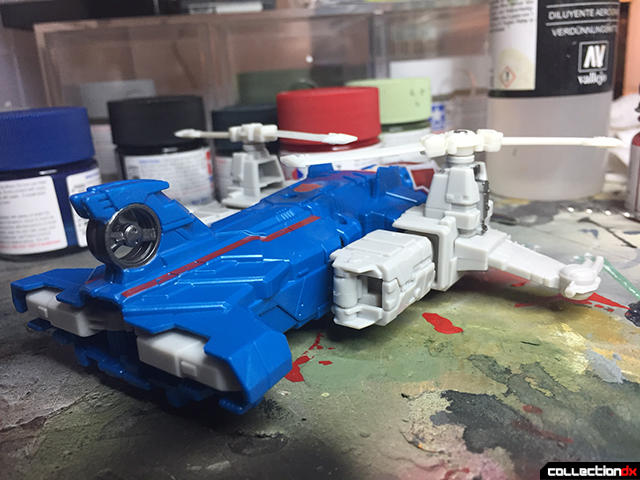 Taking everything into account Highbrow is not a great deluxe Transformer but, he definitely is a really good one. The design has been updated respectfully and faithfully, the articulation and accessories are decent, and the transformation is effective! Although you need Highbrow to complete your Autobot headmaster team, this figure is definitely good enough to want it too!

9 comments posted
Any thoughts, positive or

Any thoughts, positive or negative about this figure?

My only negatives are 1) the alt-mode has a fat butt, since the feet basically become the horizontal stabilizers. 2) he only has landing gear if you attach the two weapons to the wings, which sort of ruins the alt-mode's otherwise streamlined appearance.

Other than that I think it's a great figure and probably my favorite TR Deluxe so far.

I despise Highbrow and hated him so much I returned him. I honestly think he's unacceptably bad. The stupid head wobble is my biggest issue, but I also hate his non-locking hands and rotors that can't fold. For me, Highbrow is one of the absolute worst TR figures released.

Hm... I'm going to have to agree with both of you. I'm pretty split on highbrow, but my feelings are definitely more on the positive side. The neck is annoying, sure but I can look past it. To me, the figure is not great, not terrible but just pretty good.

Thanks for the input, but I don't know, I've been a little conflicted on what background my pictures should have. I decided on this desk because, I feel that it keeps them dynamic and engaging. So many pictures on this site stick with a white back drop, and while that has it's place, my pictures like that never really satisfied me. I like my pictures better now due to their (what I think is) dynamic and involved nature. I just feel like the desk shows what I'm doing, gives you insight into what my photo area or whatever is like, and helps them stand out among other reviewers' images.
Kind of like optimal III's pictures!

Thanks for the compliment, quinncat! I enjoy your reviews & pics too. Your preferred backdrop sets a sort of "toy/collectible" tone, which is a nice consistency. I'm in the same boat as you. I sort of go back and forth on what the background should be and how I should present my toys. And most of the time, I've got the same idea. That using whatever desk I'm at (work or home) with whatever I've got lying around just works and is fun.

That being said, I'm sorry it bothers you so much that you felt compelled to make an account just to say that! Maybe I'll work on it in the future if there are more people on the site who feel that way!

Your right it is fun! I like from both of our review images you can get some insight on where we make our reviews. I mean, I write them in my attic where the desk in my reviews is in!