Kaiyodo has recently revitalized their aging line of Revoltech action figures with some impressive adult oriented fully articulated display pieces designed to resemble “ Jizai Okimono” or “Iron Figures”. These are figures of mythical beasts presented both in Iron and Rust color tones and in more lifelike “full color” versions. These have been released under their Project KT line.

Today we will be looking at one of the more striking specimens of the line KT #004. The Japanese Ryu or Dragon. A rather recognizable variant on the classic Asian Style wingless dragon of legend. 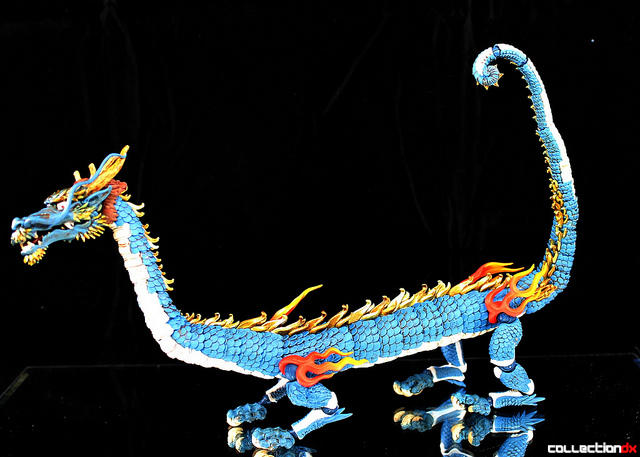 Let’s start off by taking a look at the packaging. And wow! Kaiyodo outdid themselves in this regard. I’m normally not a huge fan of packaging in general. It’s something to be opened to get at the juicy plastic and die cast toy goodness inside. It normally takes a really nice presentation for me to pause and give notice. And credit where credit is due. They pulled it off. The box itself rather resembles the styling and approach that they used on their sadly departed Revoltech Sci-Fi line. Nice bookshelf style boxes with sharp cover art and an opening flap to reveal the window box on one side and a detailed history and information panel on the other. The cover art for the Ryu Dragon is stunning and really grabs you. Similarly the back gives you a nice rundown of what the figure is capable of. 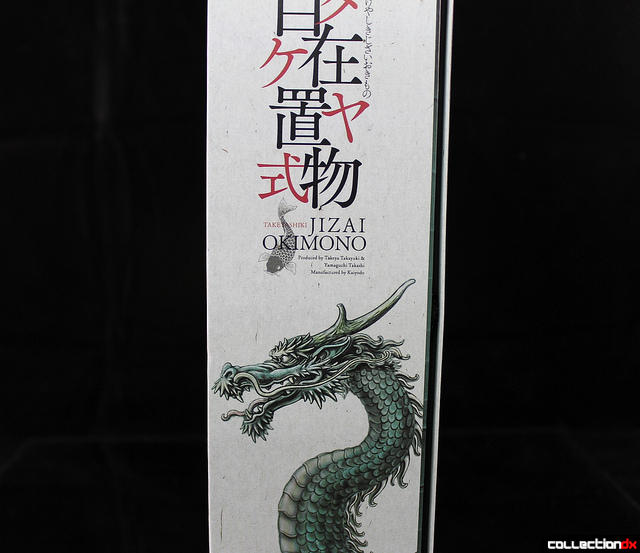 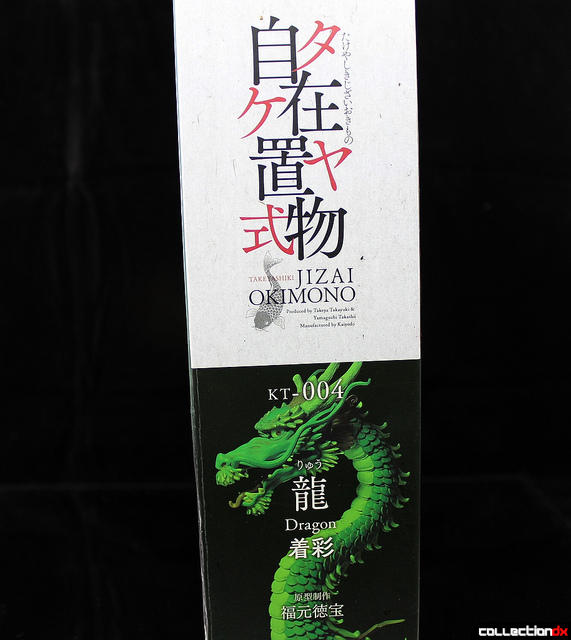 Even the sides have some real nice pop to them. This is a box that can comfortably be displayed on a bookshelf. Classy. Everything about it radiates “Your wife will let it in the house”. Opening the box’s book like cover (it opens left to right, like a Japanese book) you see the plastic trapped figure on the left. And a stunning amount of glorious and likely highly educational information on the right. None of which I can read. It even has pictures, and drawings. That dude on the left? I think he is either the sculptor, or his family got eaten by dragons? Mysteries can be such fun! But I am getting off track. The inner tray is pretty typical for this type of plastic figure. The Dragon is nestled in nicely in a bed of protective plastic sheets. Thankfully no wire ties or similar restraining devices. Also in the tray is a rather nice stand. Stunningly nice for a Kaiyodo stand it rather resembles a Tamashii or Figma figure stand. Also in the box is a small clear plastic orb for the dragon to hold, and the Kaiyodo magic tool use for shoving around their eyeballs until you finally achieve an appearance that in only mildly cross eyed and vaguely resembles a concussed linebacker late in the 3rd quarter. That is pretty much it for contents save the instruction sheet. Keep track of that. It will be useful should you sneeze at the wrong moment.
And now we finally get to the figure itself. Meet Ryu: He is both stunning and amazingly frustrating at the same time. The figure is gorgeous. He has great articulation. But if you suffer from any sort of Obsessive Compulsive Tendencies… just walk away now before somebody gets hurt.

Ryu’s body is a series of a skeleton of connected Revoltech joints and spacers. With the outer ring shaped segments of his body slipped around the skeleton. The rings that make up the body segments basically free float somewhat and can spin. So getting them all lined up properly and keeping them there can be a herculean task.

In spite of this the figure does move well with some patience and careful handling. He walks nicely on all fours. And is most impressive when reared up on his hind legs He stands between 12” and 14” tall depending on how you have him extended. He is an impressive size for a Revoltech figure. Manipulating him is a bit like posing the Bandai SH Monsterarts Gigan. Only without all the messy blood loss. The actual Revoltech clicky joints are only about every other body segment. So it takes a little bit of playing to figure out how it best moves. The head sculpt is gorgeous. It is everything we could want. The paint on the head is crisp and effective.
Now the eyes are the fun part. The eyes are movable. But they do not have the little tabs behind the face like Toy Story Woody. Instead they give you a pointy stick and you most use it to poke the dragons eyes into the desired look you wish. I’m sure there is a legend or metaphor somewhere in there involving poking a dragon in the eye with a pointy stick, but I got nothing. His front and rear legs move in much the same way as the earlier Revoltech SciFi Kaiju did. Short stubby but effective.

Paint application is not perfect, but seems sufficient to task. There are a few flaws in mine. Most noticeable a blue mark on his white breast scales. One other oddity that I am not sure if it is a paint fault or by design. The dragons underside and scales are decked out in an off white cream color. But the markings on his arms and legs are pure white.

Oh and we cannot talk about the Ryu Dragon without talking about his accessory. The shiny Dragon Pearl. The Cintamani. A “One Wish Stone”. Which allows the bearer one simple wish. (“Can you say Dragonball, class?” “I knew you could”) It’s a nice little clear plastic orb that pegs in to either hand. Even with a small peg it holds pretty well.

As I indicated above Ryu also comes with a surprisingly nice stand. It’s main purpose seems to be as a flight stand, although it will work for standing support as well. The stand is dirt simple, but works well enough. It is a standard figure stand with 2 flat plates jutting out perpendicular to the clamps. So the dragons snake like body rests on the plates and then gets clamped down. It works and you can get some pretty nice poses. Flying swooping, speed, hovering, etc. The only trickiness is the same one we started with. Those outer body rings are not locked down and they spin. So you set the stand on the wrong body segment than he will be turning and banking wildly. As I said it is a great long term project for any obsessive compulsive perfectionist in your family. Keeping those scales lined up will be their quest.

Overall I love this figure. It has a few flaws, and a few quirks. But it is such a nice take on such a classic eastern dragon. He looks great in a number of displays. He can stand in for Manda in your SHMA shelf. Or hover over your SHFA DBZ collection reminding them. Size wise he is a great size for Bandai SH Monster arts Godzilla and Gamera figures or for some of the mid sized robots such as the smaller Soul of Chogokins.
He would make a distinct character in anyone’s collection. At around US $60 he is still a little on the high side. You may want to also consider the KT#003 which is the Iron and Gold colored version. Just keep telling yourself “it’s a puzzle” to get all the scales lined up straight. When you do it, you win!

"He is both stunning and amazingly frustrating at the same time."

That one sentence can be applied to every Revoltech figure ever.