Thanks goes to HobbyLink Japan for providing this figure for review. 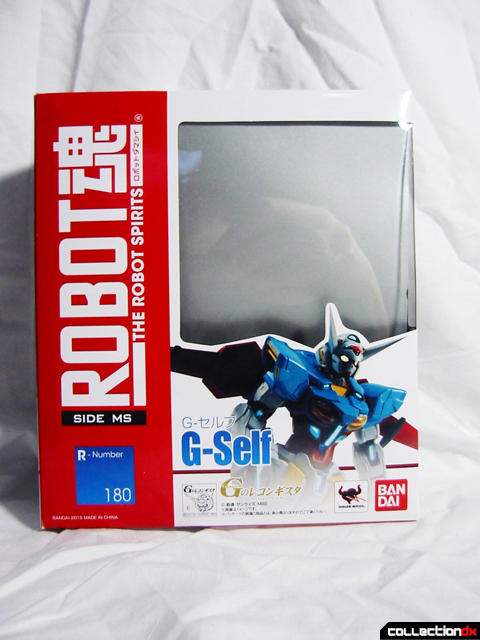 I’m going to admit something, I actually really enjoyed Gundam Reconguista in G, the Gundam anime from late 2014/early 2015 that was directed by the original Mobile Suit Gundam director, Yoshiyuki Tomino. Many complained that the narrative was difficult to follow and character motivations were not logical, but that’s ALL of Tomino’s works. Frankly, I just liked how the overall look of the show made it appear like an older (but still well polished) mecha anime. Little to no 3D CGI and line work was reminiscent of cel painted anime. Plus the design work was quite well done. 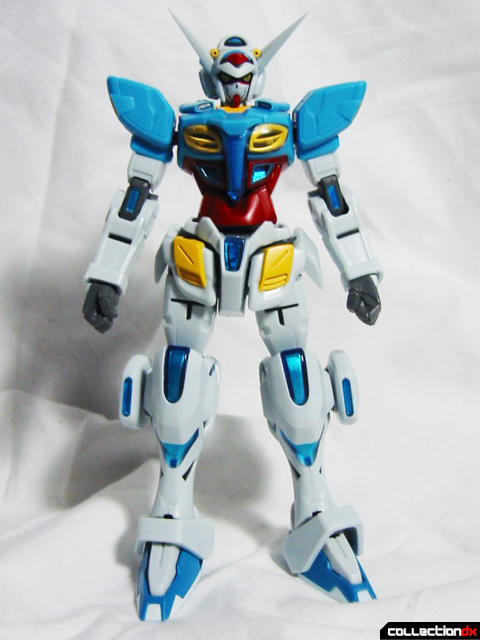 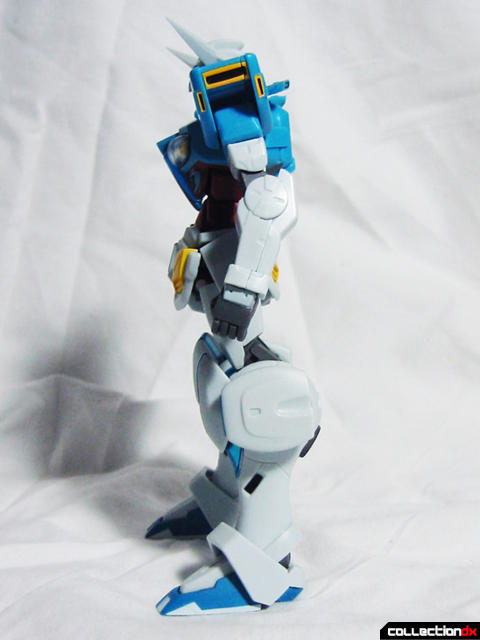 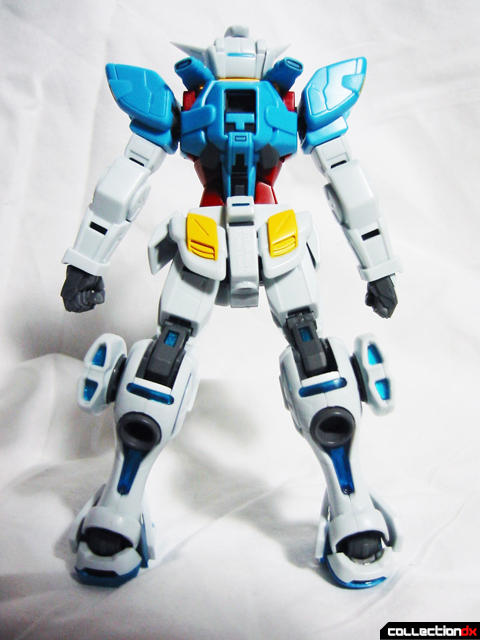 The Robot Damashii stands five inches and looks beautiful. I just love the use of transparent blue plastic with the silver paint behind it to make it stand out more. It reminds me of a early 2000’s iMac and gives it a modern/futuristic look to the overall design. 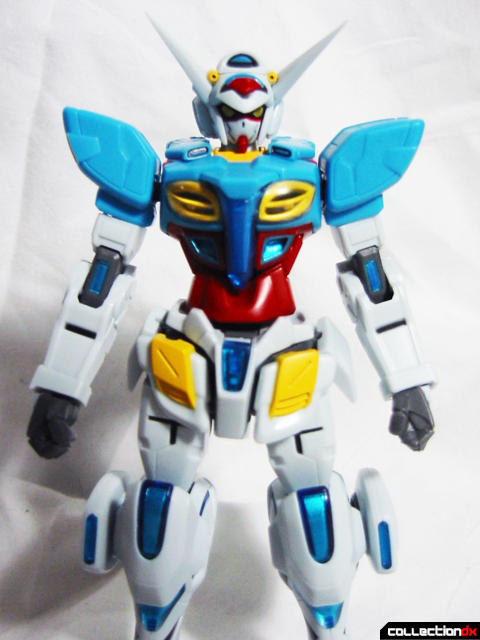 The head boasts larger than usual Gundam eyes and large spiked antennae on the head giving a it unique look. Please be careful with said spikes as they're made of hard plastic and are thin, thus VERY sharp.

While the figure looks gorgeous, the same can’t be said about the articulation, which seems to taken a few steps back in what’s expected in the Robot Damashii line. I suspect this might have been done for budget reasons so they can incorporate the transparent plastic bits on the body. 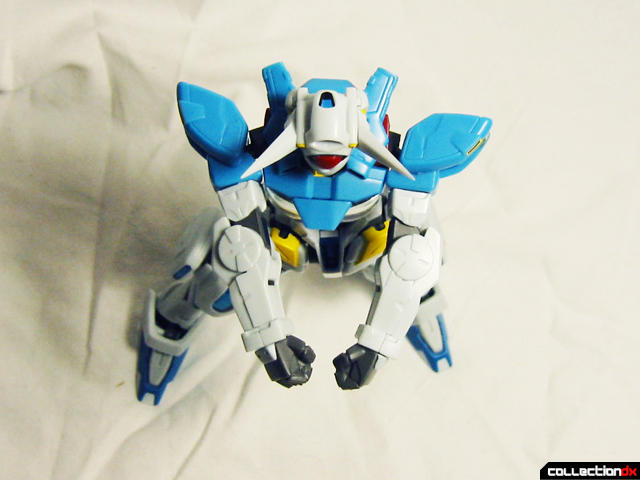 The head can turn fine side to side but not as well up and done. The shoulders at least pull out well with no issue but the elbows can only bend around a 100 degrees. Certainly not the 180 degrees many other RD releases have had at this point.

The torso has the usual ab crunch, but the waist can only turn a little. The skirt armor is on this little double ball joint which pop easily if not handled carefully. 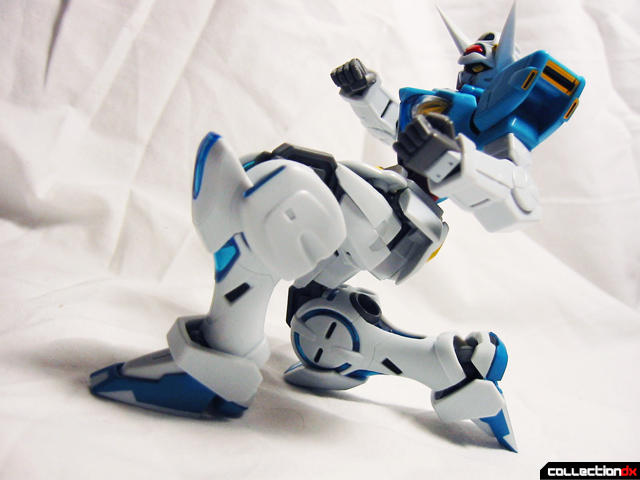 The hips have an extra joint which pull up along with the an extra joint for the skirt armor to pull up with it. The thighs have a sliding joint on the bottom (it doesn’t slide automatically, you have to pull it manually, though). The knees are a single joint but at least the leg can bend further to like 100 degrees or so. 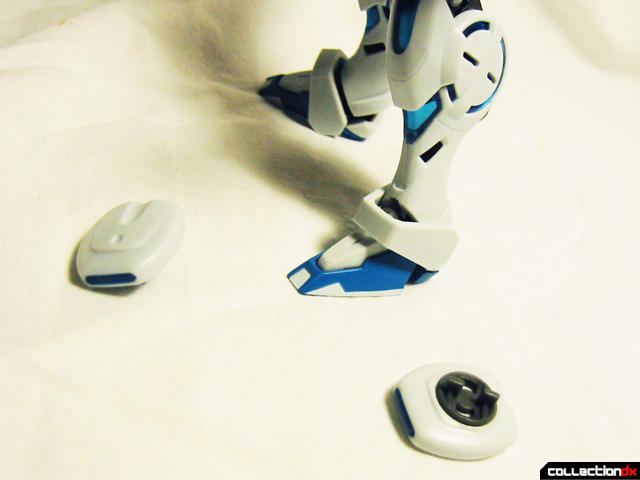 Speaking of the legs, there’s these parts that attach to the shins. They pop off too easily but at least stay on if not touched. The feet I have no problems with. They can point up, down and side to side. 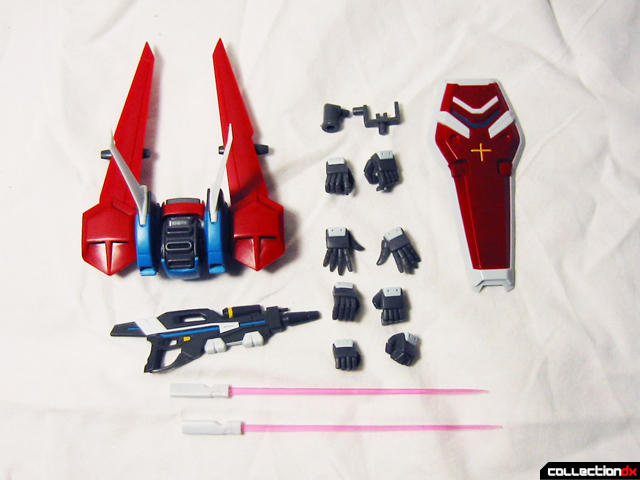 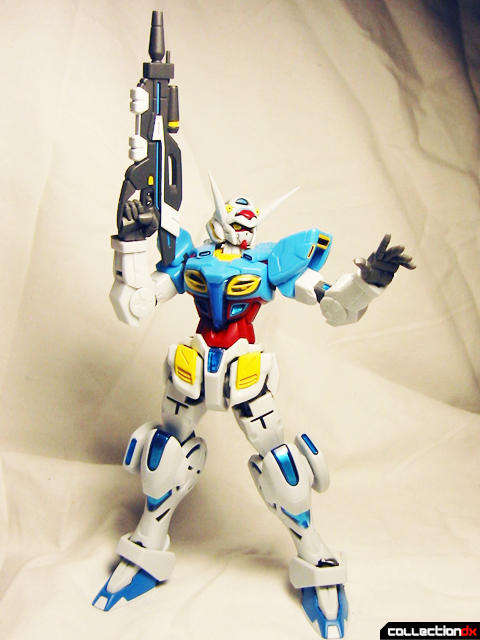 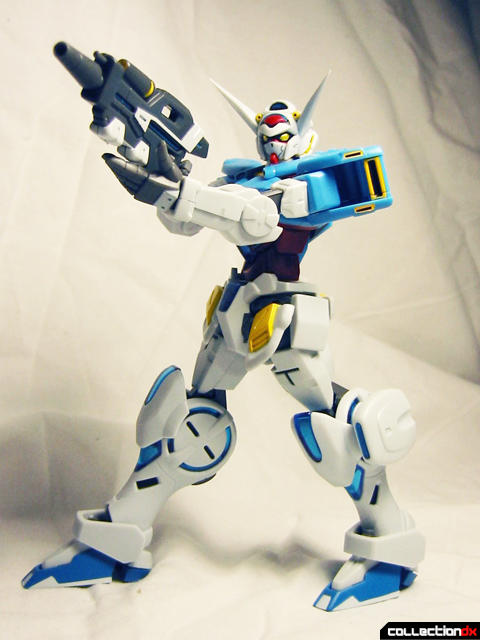 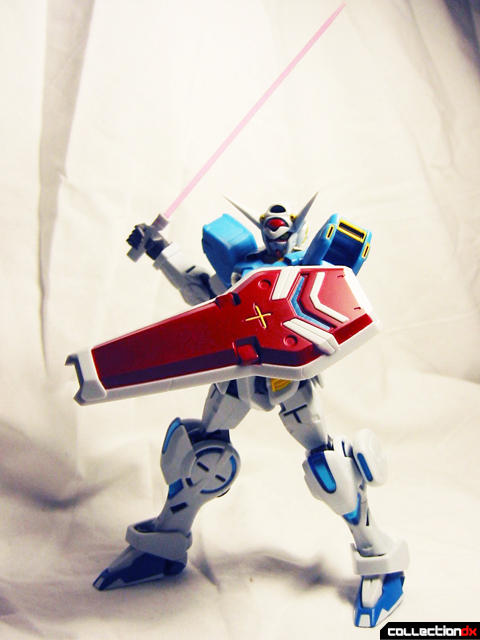 Shield has a handle with two attachment points. The overall shape reminds me of the Strike/Astray Gundam shields from Gundam SEED. 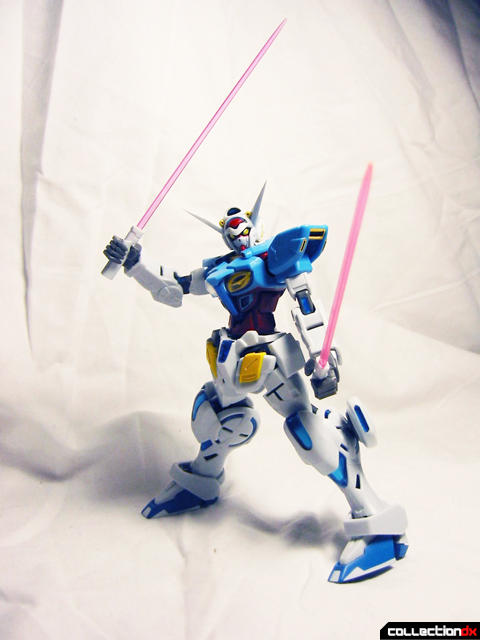 Beam sabers here remind of the ones the Turn A Gundam had. Oh and those notches in the handle actually aren’t just for show. The thumb is supposed to fit in there. The hilts themselves have nowhere to fit though as in the anime, they fit on the area between the shoulder and neck. 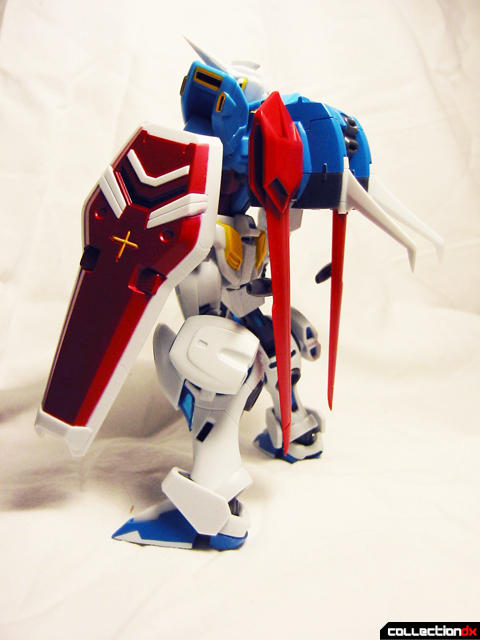 The Atmospheric Backpack attaches and stays quite well with no issues. The part that has the tail wings flips up and the main wings flip out. 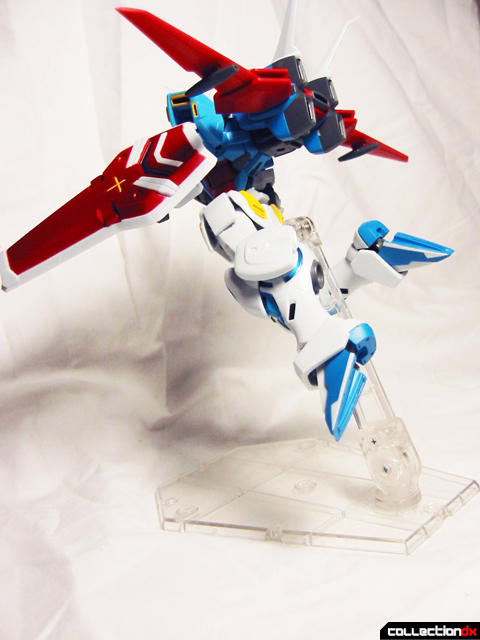 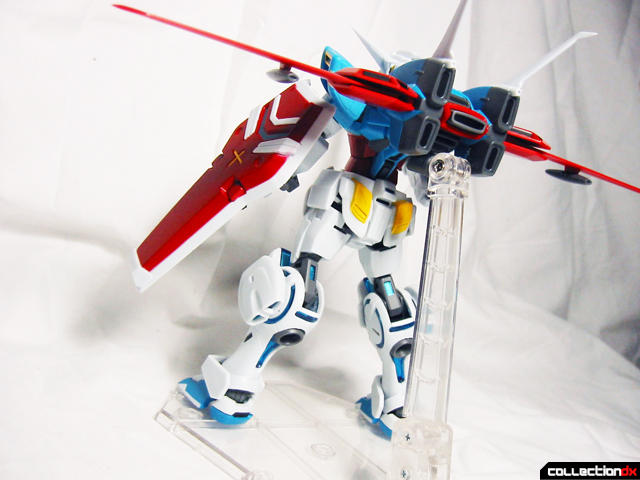 There’s two ways to attach the stand. One is on the figure itself, which is underneath, and the other is on the backpack when ready for flight. 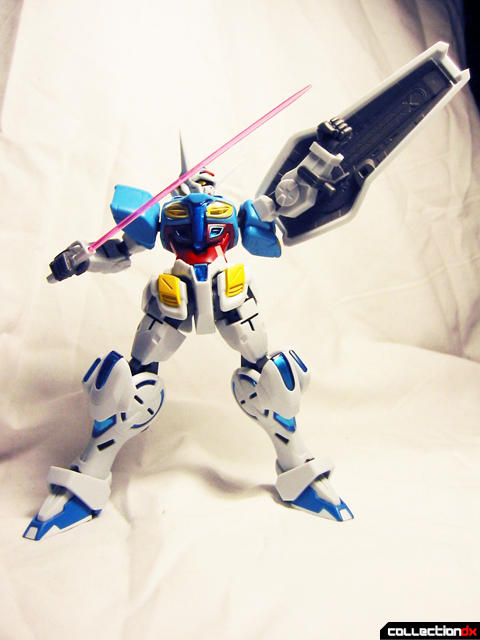 So overall, this figure has its ups and downs. The articulation in some areas isn’t up to par with some of the other recent RD releases like the Hyaku Shiki, but the overall look of the figure is simply a beauty that it’ll look unique in your collection. Keep this in mind if you wish to own this figure.

I really loved the rich illustrative style of the shows animation, reminded me quite a bit of what I loved about Eureka Seven. While I disagree with your asessment of Tominos' overall coherence in scripts, I gotta say the G Self is a pretty good looking unique design. I'm holding out for a MG or at least a RE:100 of it!