Re-Ment is a manufacturer of miniature dioramas such as the sushi sets that Siningy recently reviewed. They've just now branched out into action figures, and they decided to start with skeletons. There's a daddy skeleton, a mommy skeleton, a child skeleton and even a dog skeleton. Why the hell not? They are stupid cheap so they make great filler for an order that needs a few dollars more to get free shipping.

The toy comes in the cheapest possible packaging - a baggie that you tear to open. Inside is a plastic tray with the skeleton and some option parts. 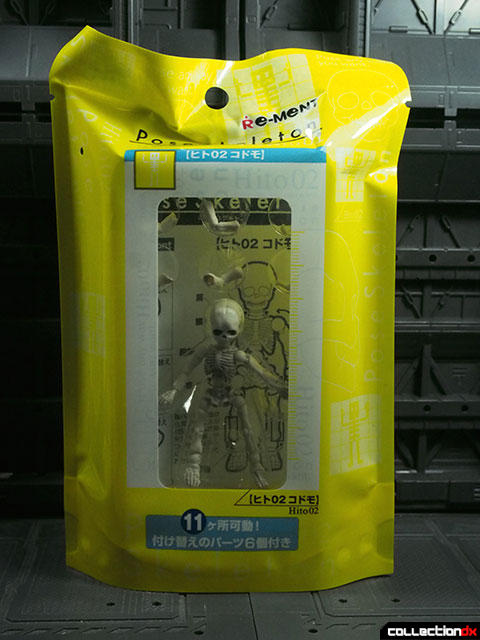 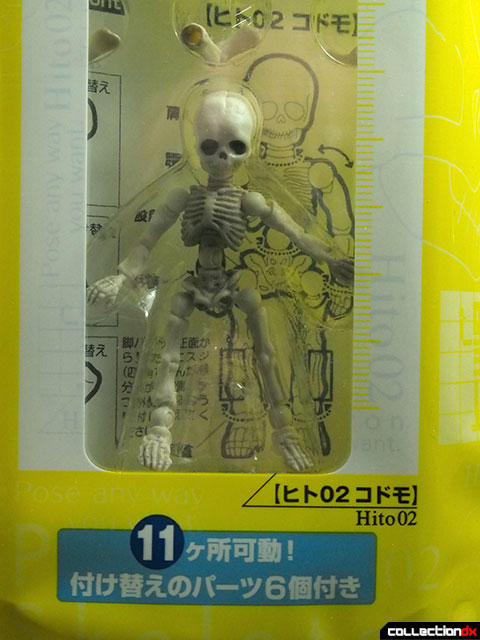 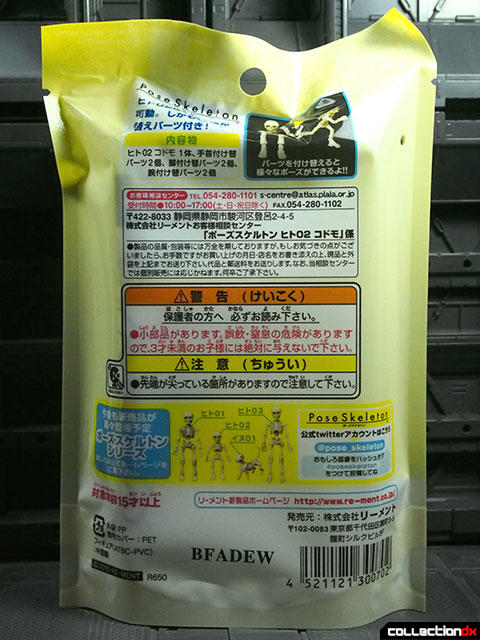 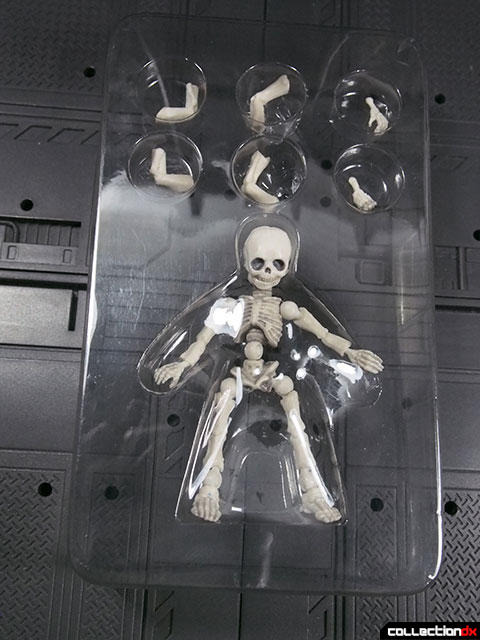 The skeleton is nicely detailed and has the squat proportions of a child. I've never studied a child's skeleton, but i'm going to have to take their word on accuracy. How the hell did they get reference for this? 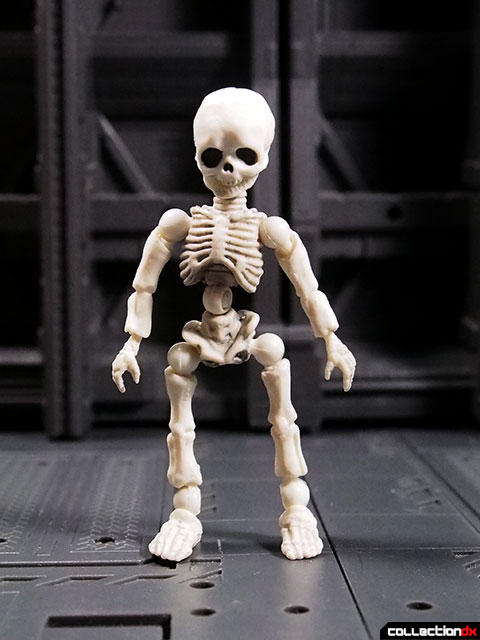 The Re-Ment stuff is small, I'd guess 1/12 scale. If you have their diorama sets, the skeletons would fit in nicely. I don't have any of them, and thus, this is a wasted opportunity for a review. I get the feeling these are much cooler when you have all the furniture to pose them with. 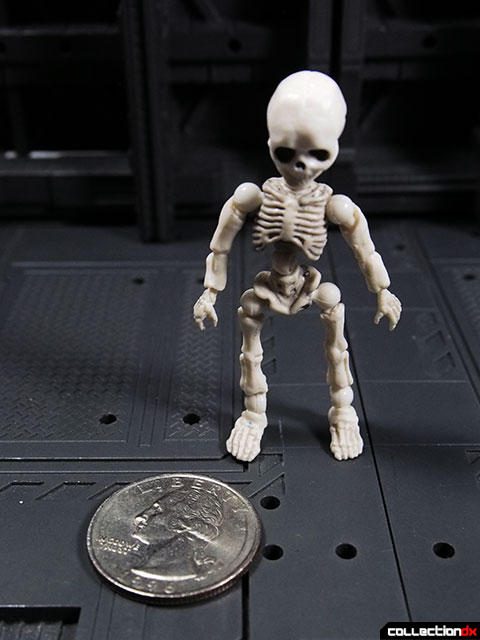 There's some articulation at the neck, shoulders, torso, hips and feet. Not a lot you can do here. Also the jaw is articulated. 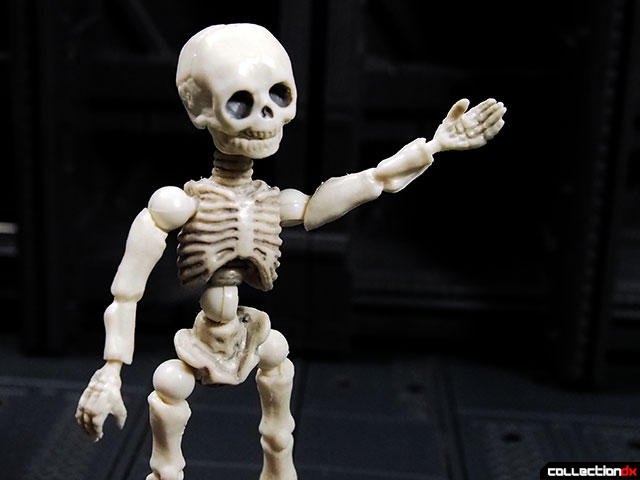 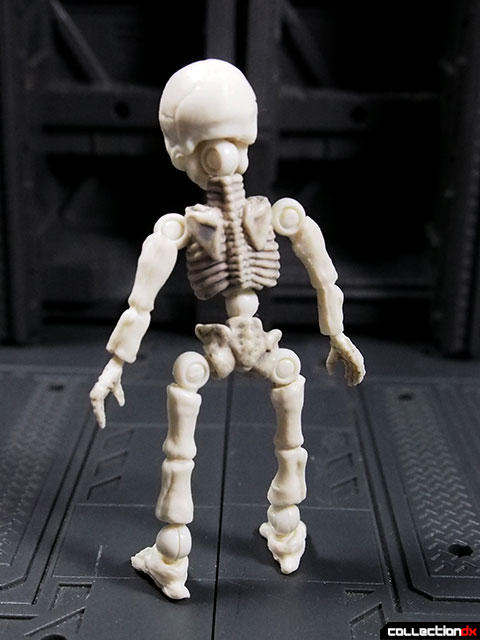 An alternate set of bent arms and legs are included in lieu of elbow and knee joints. These are a bitch to change out, and my fat American fingers were no help in this. I'm just not cut out for this kind of work. I need tweezers. Once you get them switched out I guess they would be helpful if the child skeleton were sitting on a bench or something. But i have no bench, and this looks dumb. 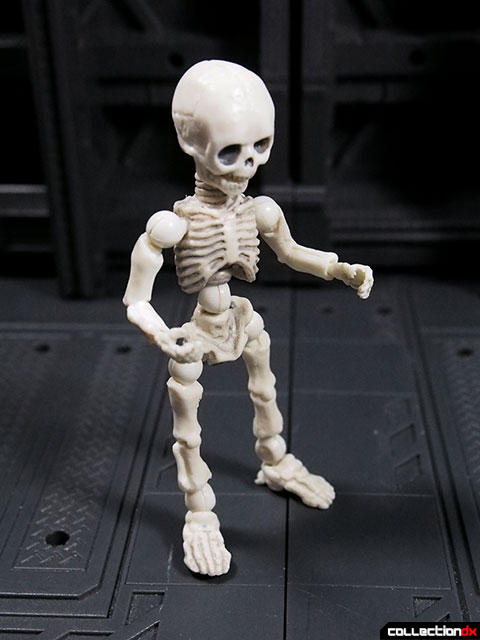 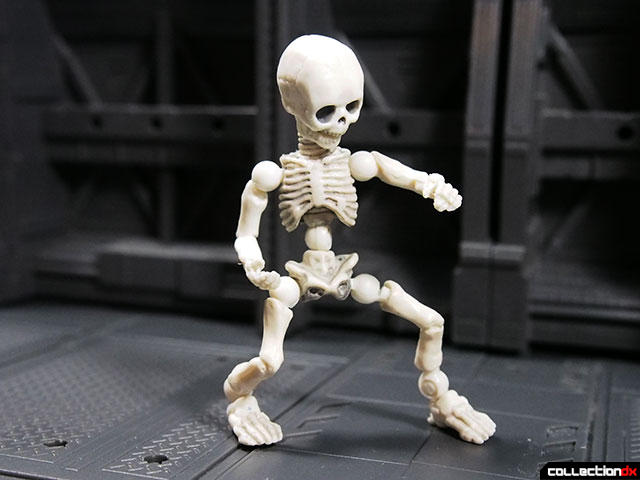 If I had ambition, I would have tracked down some kind of diorama, and made all kinds of funny poses with this thing. Look, it's a child skeleton riding a bike! Look, he's in school! Now he's eating sushi! You get the idea. I couldn't be bothered. It's a skeleton of a kid. What's wrong with you. What's wrong with all of us?

3 comments posted
"How the hell did they get reference for this?"

Thousands of years of medical history.

I purchased one of these guys, the Adult Male at the Pasadena Robo Toy Festival last year, they're closer to 1/18th scale than 1/12, SLIGHTLY smaller than a modern GI Joe at 4". I have mine currently riding my Transformers Oil Slick http://www.tfu.info/2008/Decepticon/OilSlick/oilslick.htm

Japan never fails to weird me out. Great review, but I think I'll stick with robots and the occasional kaiju.