Slug is an ugly name, I still prefer Slag even if it means "woman who sleeps with anyone with a penis" here in the UK.

When the early pictures of the AOE Dinobots were released only Slug caught my eye, so here he is outside my flat in the sun, which is rare in the UK. 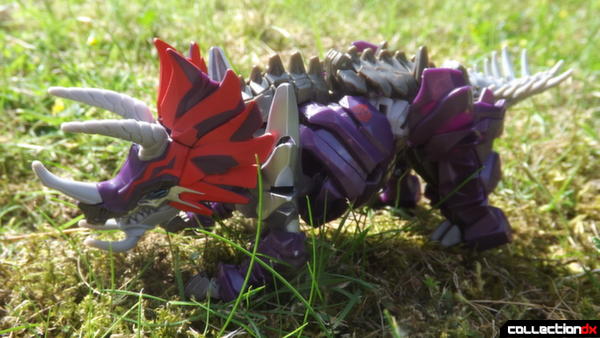 I`m breaking this review up, the first half is the figure right out of the box.

You get a colouring not seen in the film, it`s ok for what it is with the purple, grey and red accents.

The pattern on the Dino head crest is quite impressive for a deluxe Transformer figure. 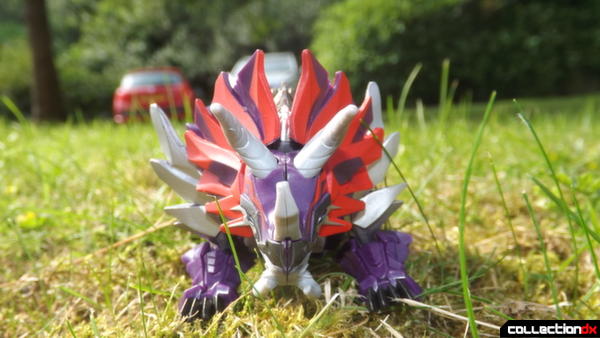 Articulation in dino mode is limited, partly due to the transformation.

The front legs are on ball joints but are limited by the head crest and shoulder spikes, the back legs move so very slightly back and to the sides, the back feet are on swivel joints due to transformation.

The tail has a single swivel joint again for transformation.

Finally the dino head can move down and the mouth opens. 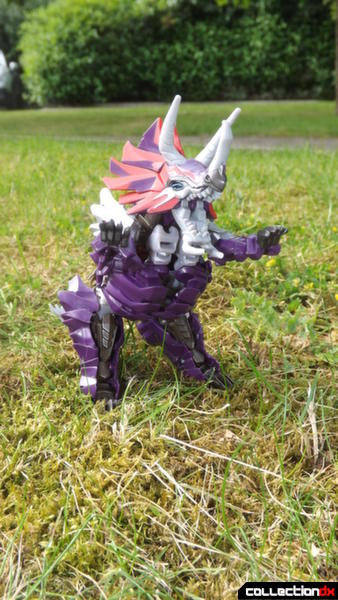 You place each sword handle into holes in the ribs on either side of the body, this is supposed to be like scythes on a chariot to run down Decepticons (or so the toy designer claims). 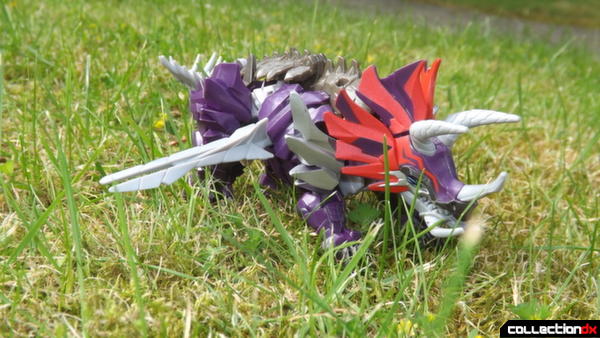 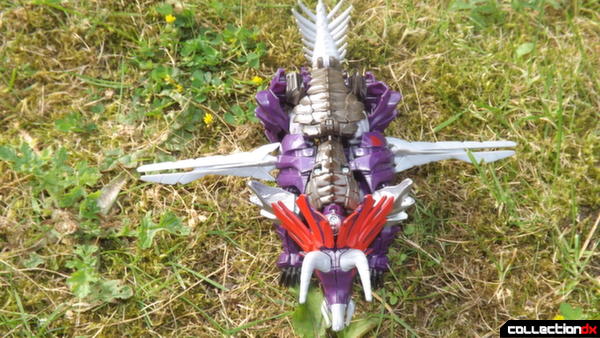 The swords are made from a soft plastic or rubber material, along with the horns on the head and the tail spikes.
Packaged in the box the swords are interlaced like the picture. 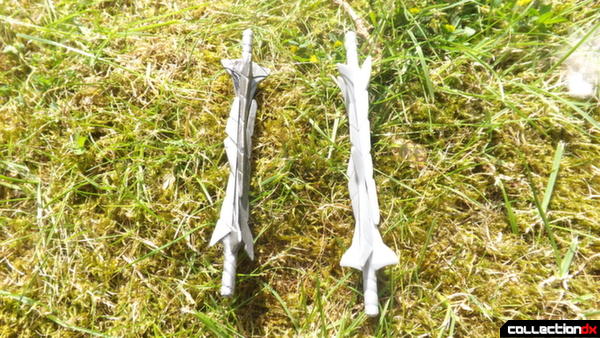 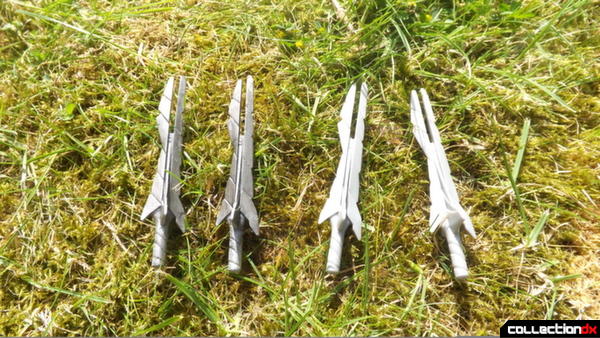 In robot mode Slug has the look of a medieval knight (as with all the Dinobots),

He has a decent amount of bulk in his shoulders and lower legs, though the front dino legs on his back hinders articulation in his arms a tad.

The feet have pointed tips and the head has the Tudor close helm look to it. 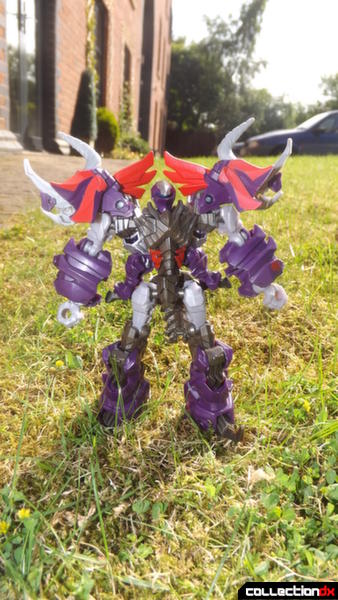 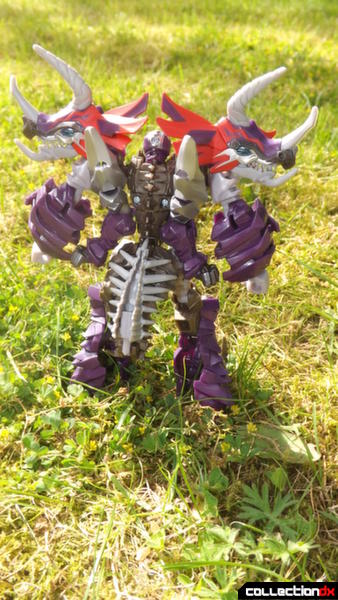 I was surprised at the poses I could get out of Slug, 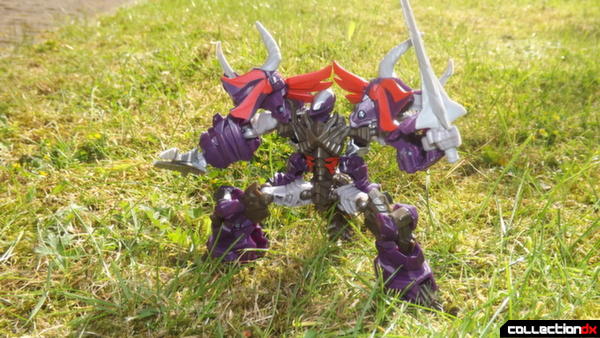 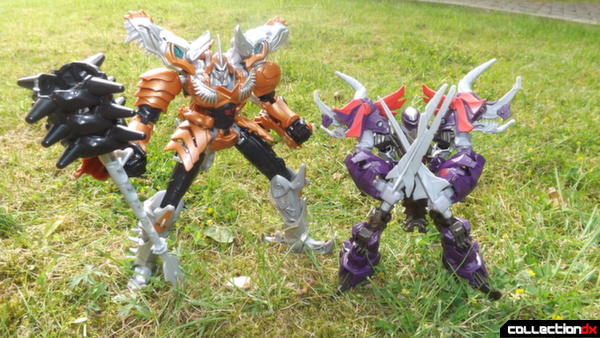 The second half of this review is with a customized version of the figure, I mentioned I wasn`t a fan of the original colour so I painted mine in metallic silver and gold with a black wash over the top.

I feel it improves the overall look and makes the figure look more like the characters briefly shown in the trailers. 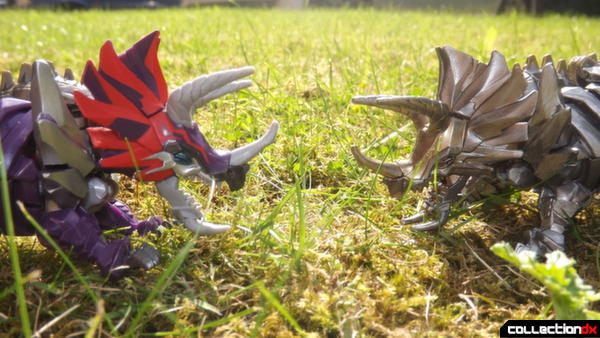 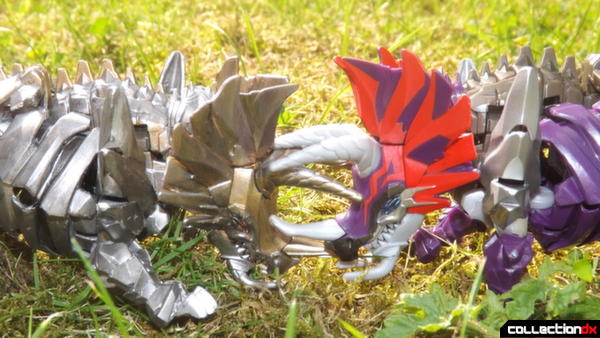 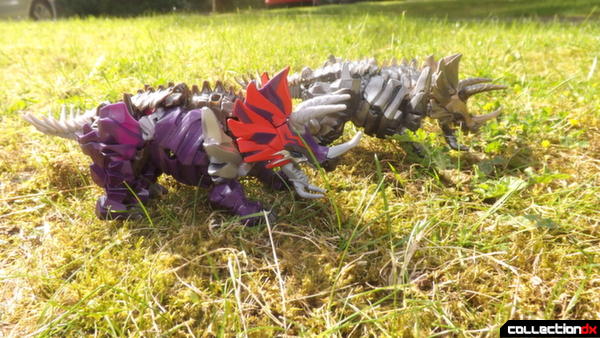 Without being able to see a full dino and robot rendering, much of my customization is what I assume to be the look, though I have added the gold to touch on the G1 look of Slag, mainly on the dino head, spikes and robot chest. 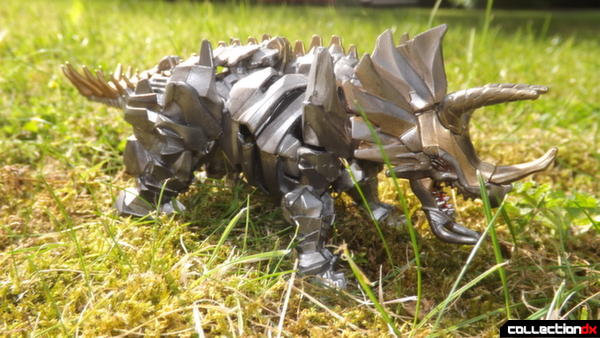 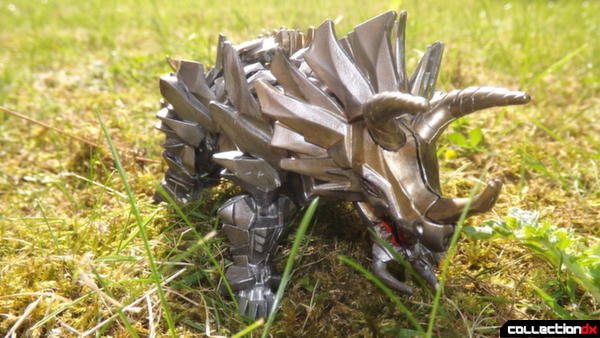 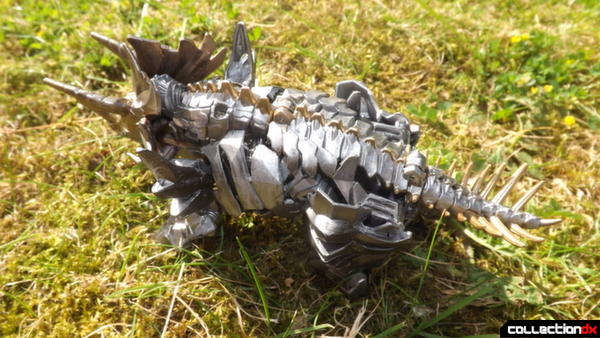 Articulation is much the same except the joints are now little tighter. 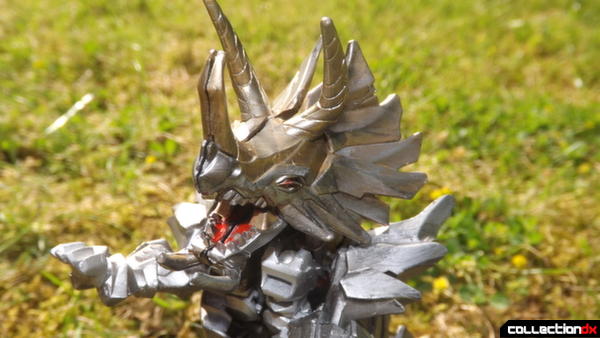 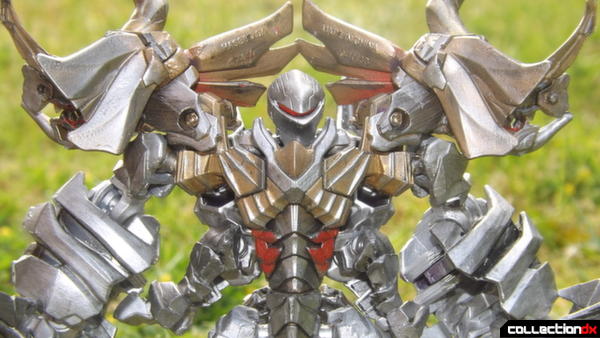 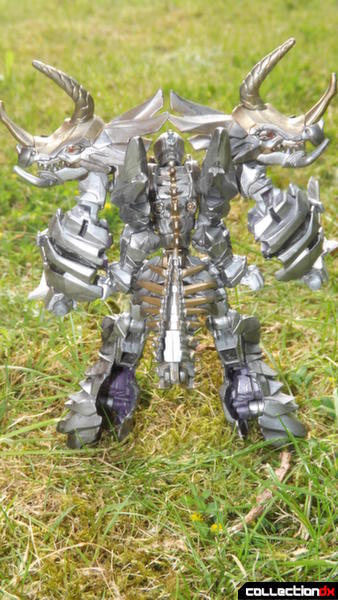 After completing this custom I wanted to see what the other Dinobots would look like and it`s made me want to go out and complete the set.

It`s been a long time since I`ve bought any transformers, from what I`ve seen they`re getting smaller and cheaper made for a larger price. 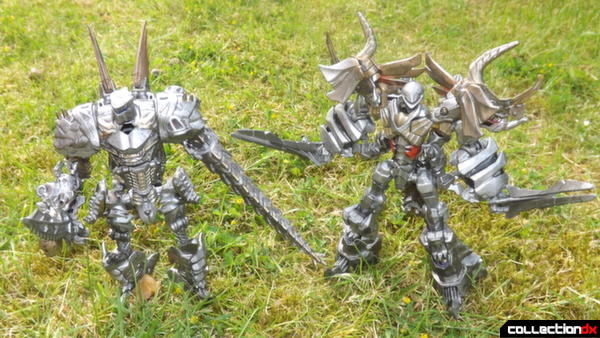 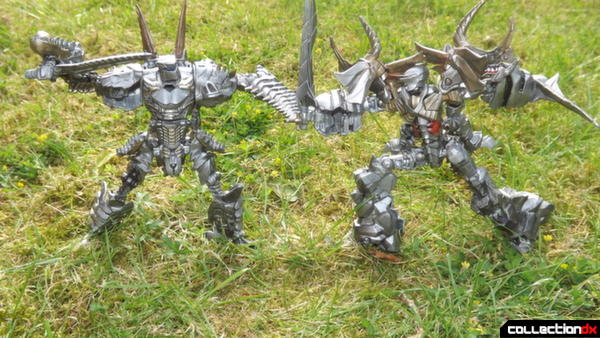 But after being able to do pictures like this, I'm back on board as long as I can paint them myself. 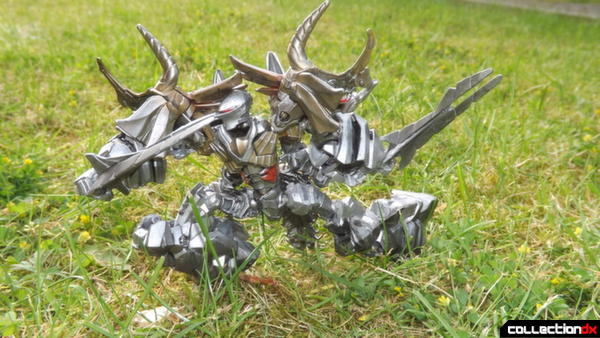 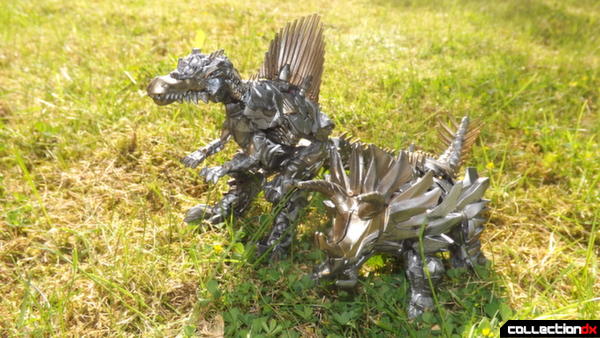 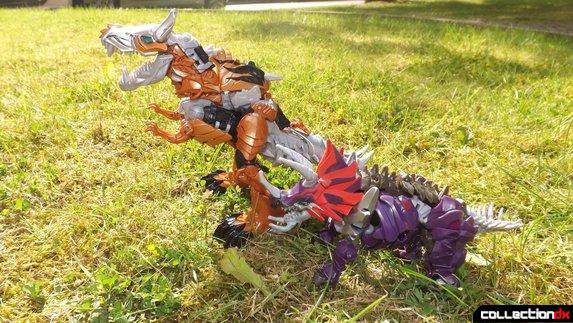 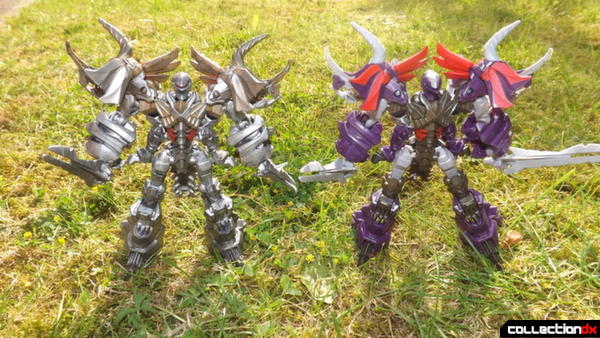 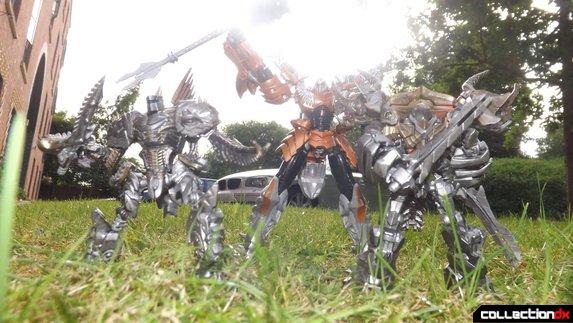 I love those custom figures!

Great customs. Definite improvement. You are correct in your transformer assessment in terms of quality and price. If you have not looked at the 3rd Parties do so. This character is being released by Fanstoys called "Scoria" in stock now, it's $200 and full on G1 cartoon but if that's your thing you need to go to the 3rd parties...

Your custom version steals the show!
I've heard a lot of fan griping that the Dinobots in the film trailers look like indistinct piles of silver knives, matched by praise for how the toys give each a unique color scheme. I agree to a point... but your custom work turns that on its head. All-metal Slag looks amazing in toy form, and your choice of a few different tones plus the wash make it anything but indistinct. Leaving a little red in the midsection was a great nod to G1, too.
I'm so impressed!