Kamen Rider Hibiki was brought to you by HLJ!

I'm gonna be honest here, I never really cared about Kamen Rider Hibiki. The show had a lot of promise, and it was very different from the other Kamen Rider shows. But due to production and staff issues, the show was run into the ground towards the end. The end of the show really left me with a sour taste in my mouth, and I felt as if I had completely wasted my time. As such, I never really cared about getting merchandice from the show... Until now. 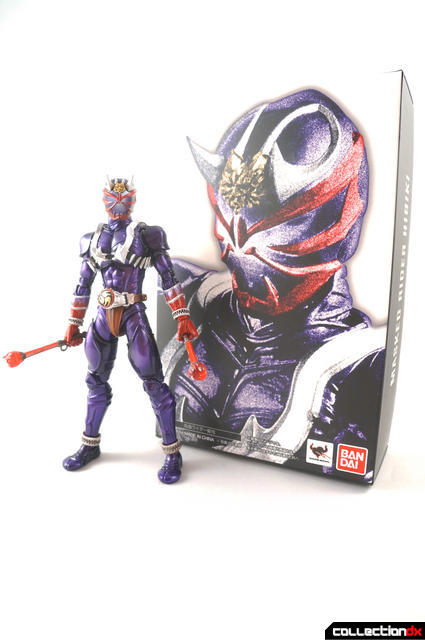 The packaging on this guy is amazing. It's very small, and kind of looks like it belongs on the shelf of an Apple Store. It just screams quality. At first, I wasn't sure about these new Figuarts boxes, but if they're all this nice then I won't complain at all. 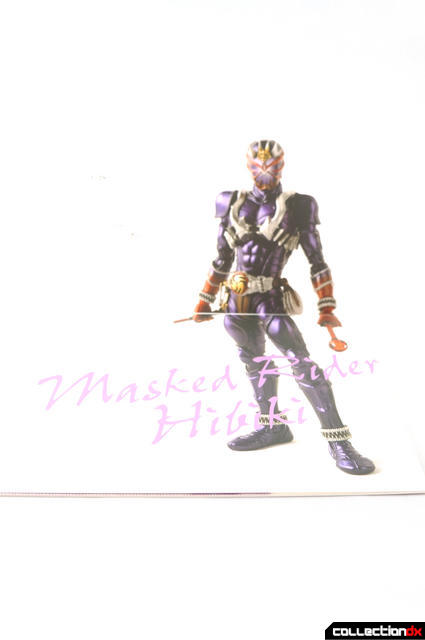 Plus, he comes with an art book. 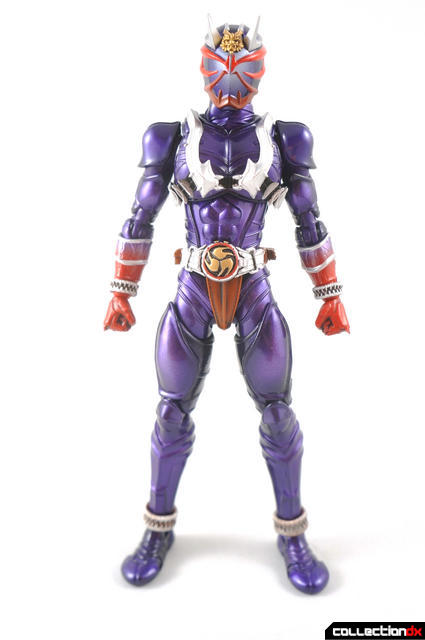 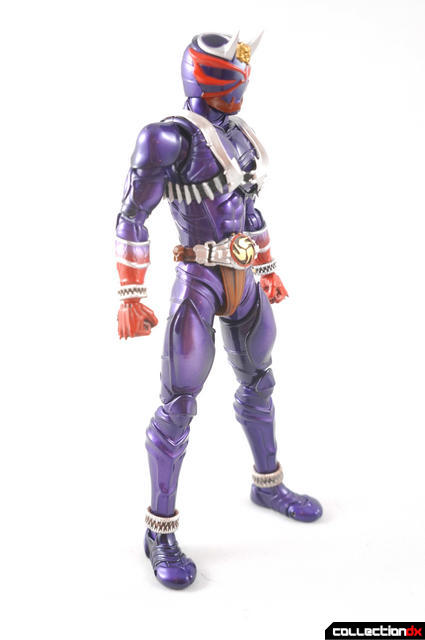 On to the toy itself, Bandai has brought us one of the most gorgeous figures I believe I've ever seen. Kamen Rider Hibiki shines like nothing I've ever seen before. When he is on a shelf, the light reflects off of him in such a way that I can only describe it as breathtaking. In short: this is the most gorgeous S.H. Figuarts release I've had the pleasure of looking at. 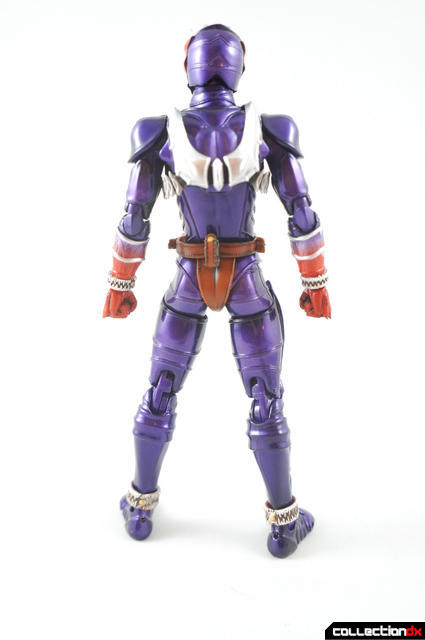 The sculpt is really fine, and all the details of the show are there. His Power Thong totally looks like leather, and that's something that's incredibly difficult to pull off. 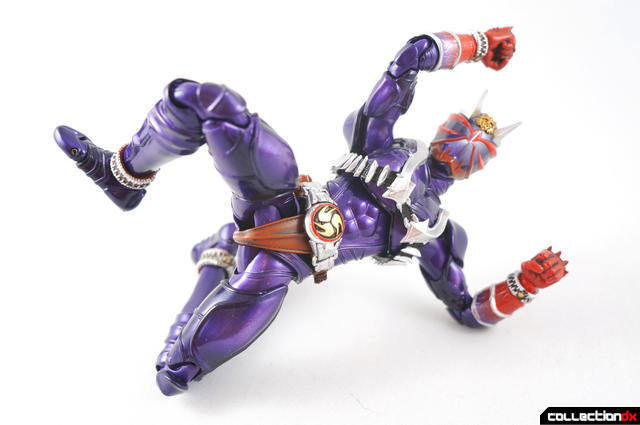 Articulation is superb. Hibiki uses the current Figuarts body which can move in any direction, and looks great doing it. 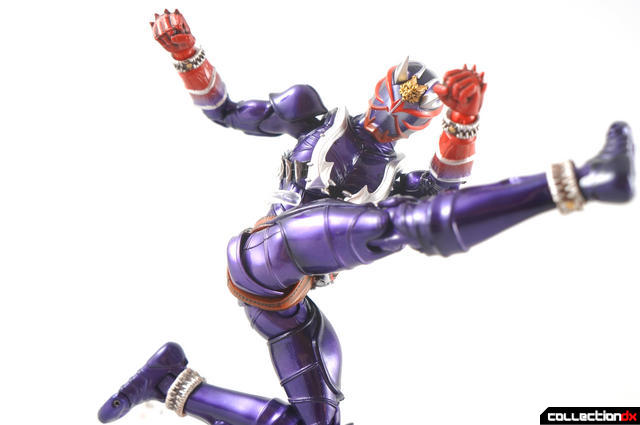 There's also a new hip joint system that utilizes several swivels instead of a ball-joint. It's really nice, and the figure feels great to move. 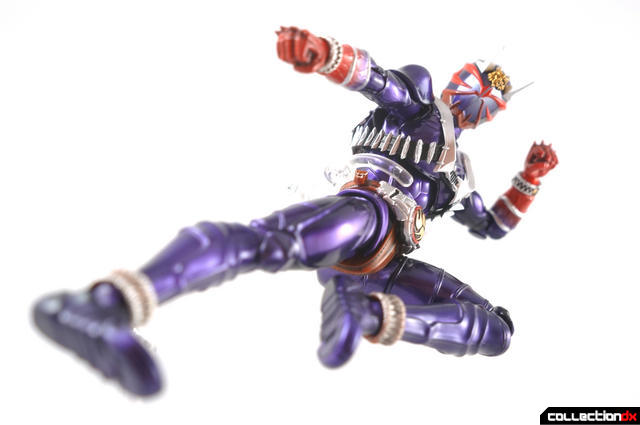 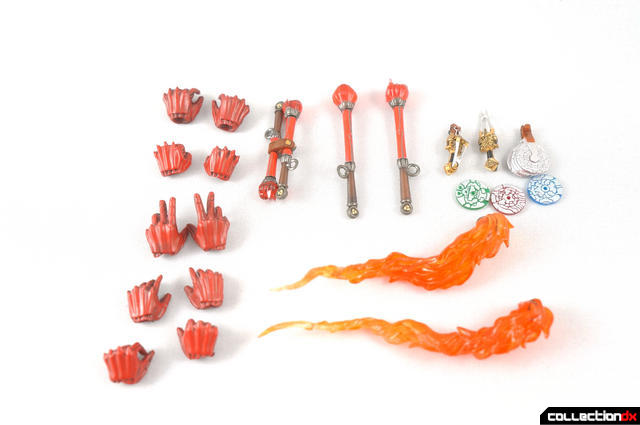 He comes with all the accessories that he will need, including a mountain of hands, drumsticks, two versions of the tuning fork, drumsticks wrapped together for storage, three disk animals, various nicknacks to hang from his belt, and effect parts for his finishing move. 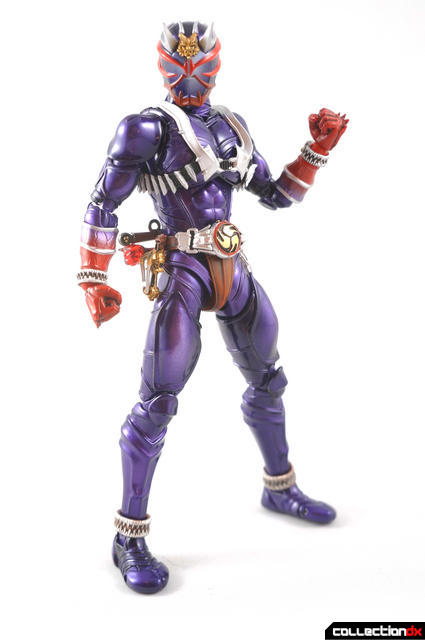 So already, you can see that he comes with more things than you'd think would fit in a box that small. I can't think of anything else I'd need except for a giant drum effect part. That would have been neat. Still, I don't think I'm missing out on anything. 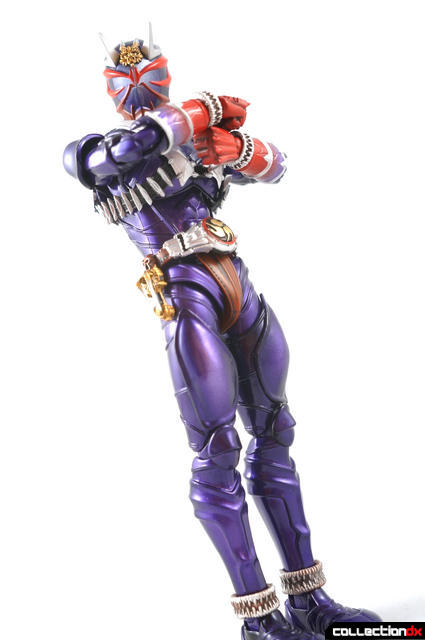 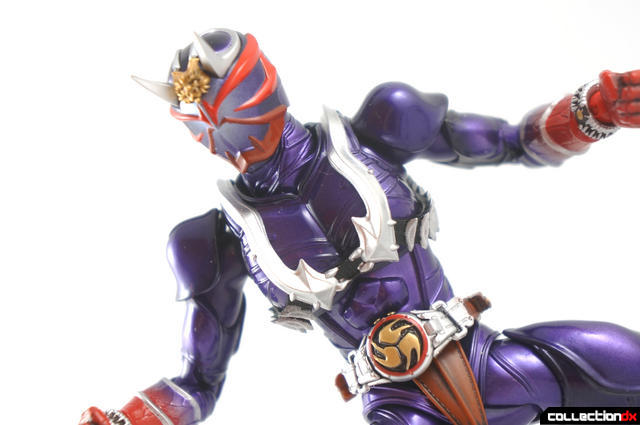 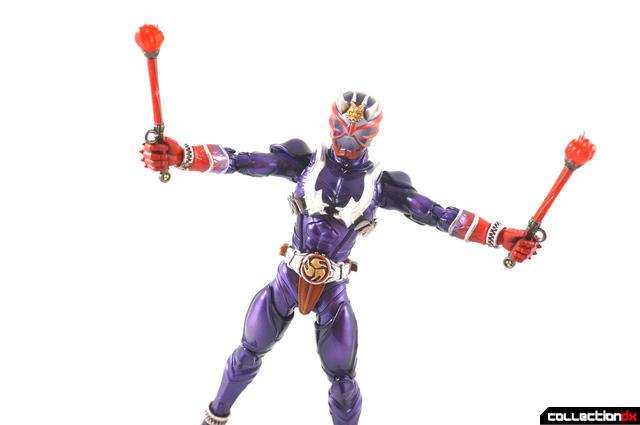 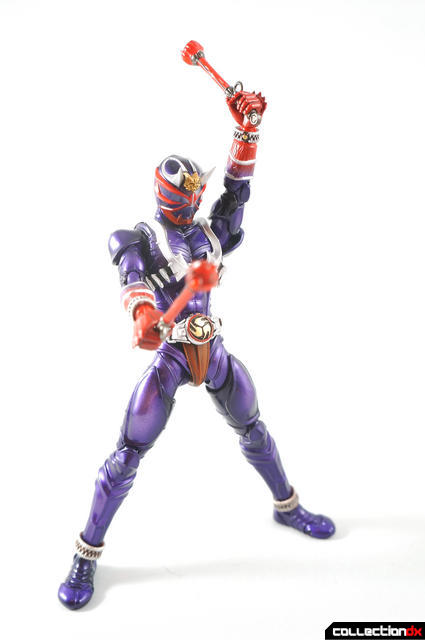 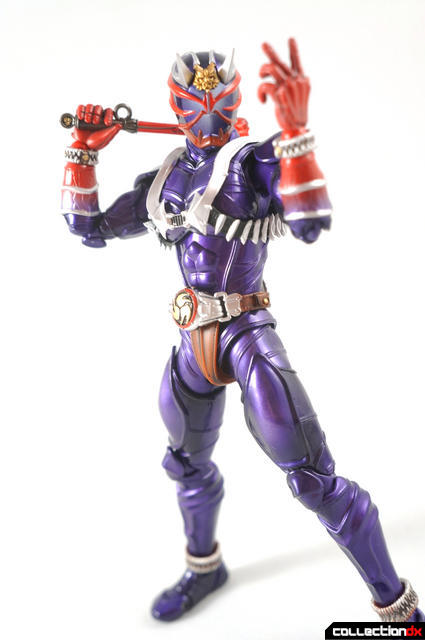 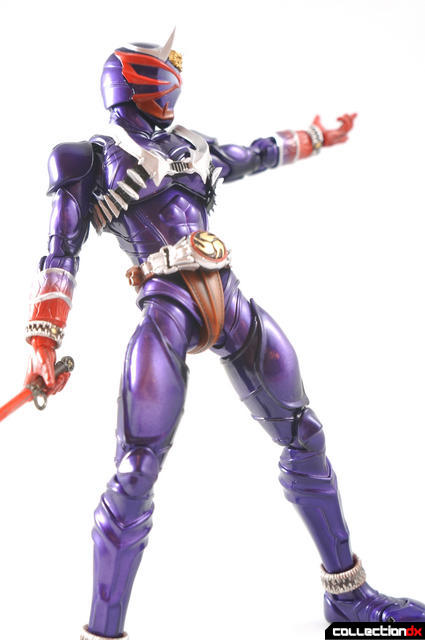 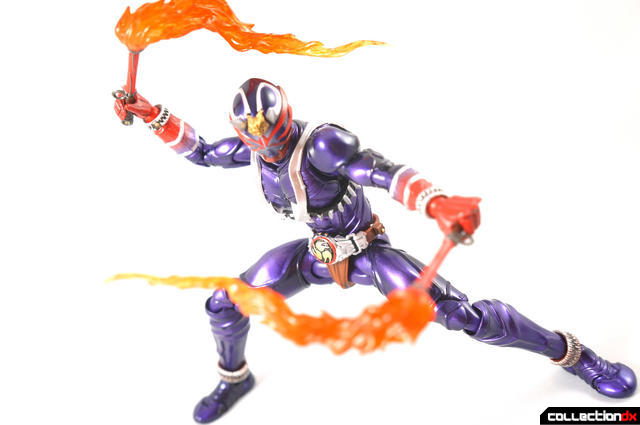 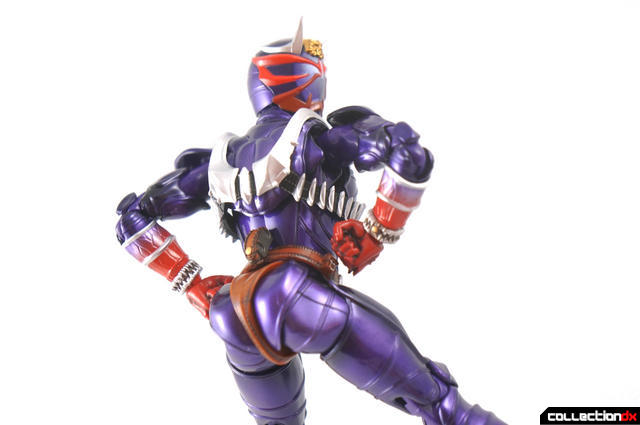 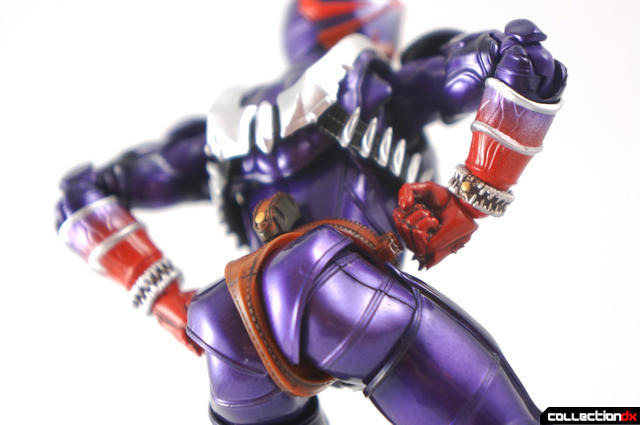 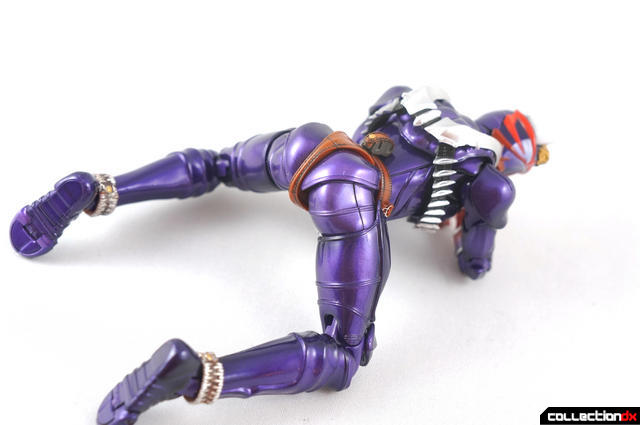 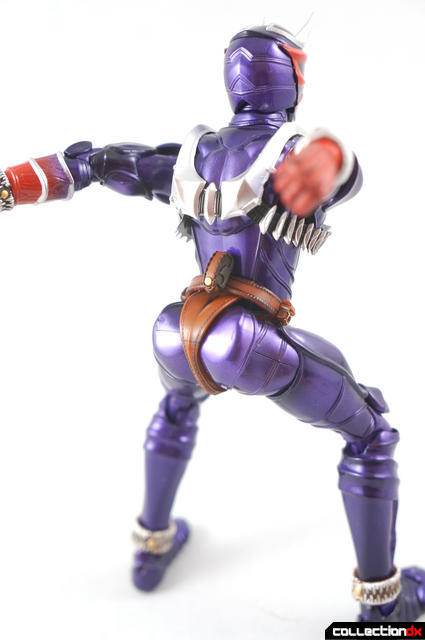 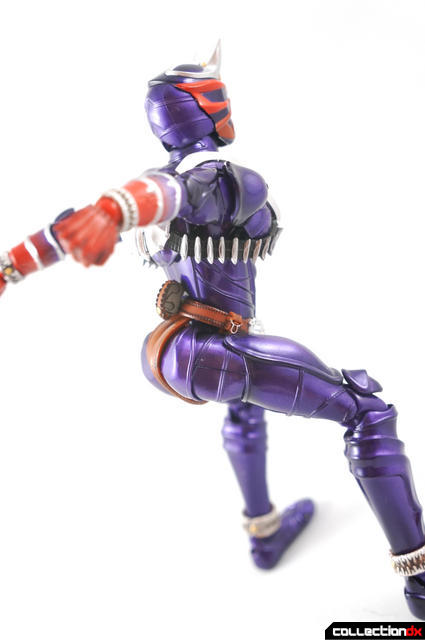 Seriously, S.H. Figuarts Kamen Rider Hibiki is one of the best releases Bandai has ever had. Please pick up this figure. You will be completely ashamed of yourself if you miss out on this one. 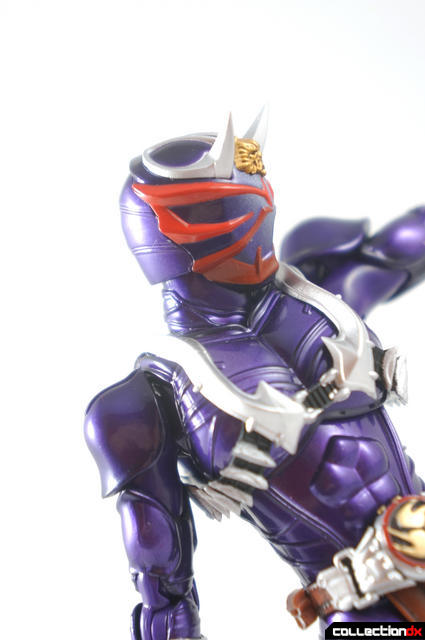 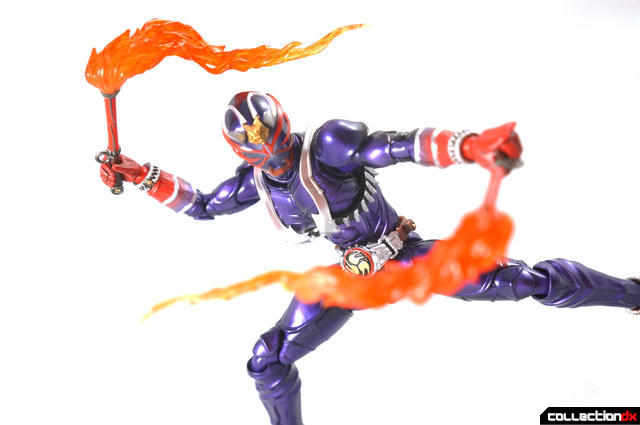 It hadn't occurred to me that you could make him twerk. I'm dumbfounded.

The horns are fragile, however. Sometime during the first few hours I owned him, my Hibiki did a shelf dive two feet onto carpet. The tip of one of his horns broke off and apparently vanished.

Incidentally, the hands intended to hold the drumsticks are designed so you can slip his forefingers through the loop on the sticks. Try it out, but prepare to be even more impressed.

So this is on par with the Kabuto? That figure is stunning is this the second in that new line?

We need to make a new fetish category just for you: Rider Booty.