The history of the Huckebein Personal Troopers is long, tragic, and highly speculative. It was one of the staple units of the Super Robot Wars Original Generations series of games, before its importance was continually reduced in every new release. Then in 2nd Super Robot Wars OG, the entire Huckebein series is casually annihilated, and their surviving components are put into their successor, the Exbein “Ashe”, making it into the incredibly powerful Ex-Exbein, piloted by series newcomer Ing. To add insult to injury, the book included with the game notes all of the many Kotobukiya Super Robot Wars model kits except all the Huckebeins. Legend has it that the Huckebein met such a fate due to looking way too much like the Titans Gundam Mk-II, but no one seems to be sure. Regardless of that, the Ex-Exbein is the kit I've been looking forward to most this year, and it was well worth the wait. 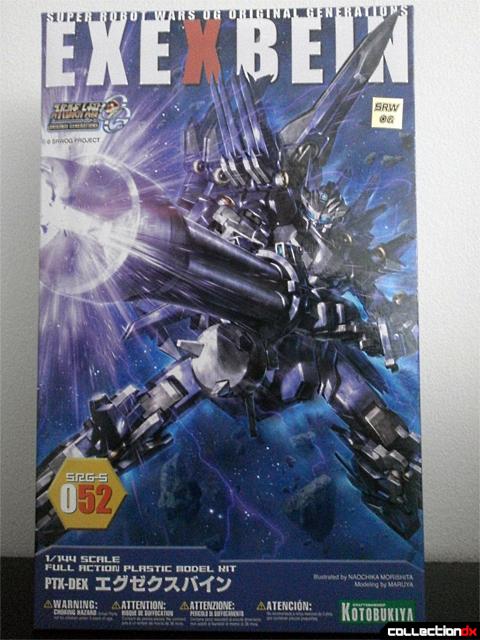 The box keeps the same basic design that S.R.G-S has had for years. This kit is actually the first brand-new mold the line has had since last year's Neo Granzon. 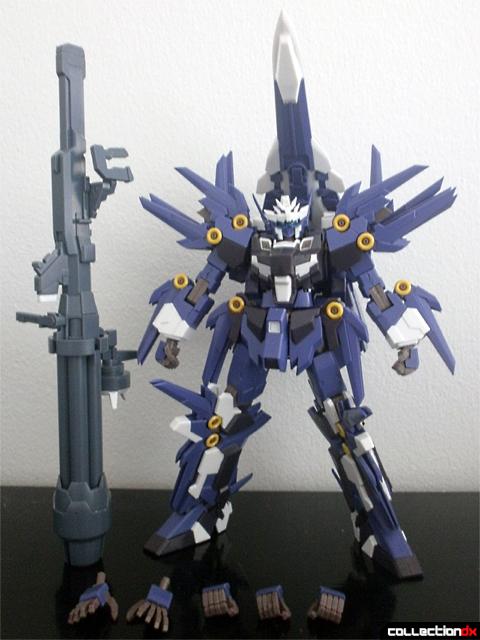 Kotobukiya kits in general are not very beginner-friendly, and this one is no exception. It has twenty-three trays, seven of which are just for the TK Sliders that adorn the Ex-Exbein's entire body. There are no stickers, just two pre-painted pieces (specifically, the eyes and the visor). After completion and with no additional painting, the Ex-Exbein looks something like this. For accessories it has the TK Shield and Saber that go on its back and the Black Hole Buster Cannon. For hands you get fists, splayed hands, and three hands for holding all the weapons. 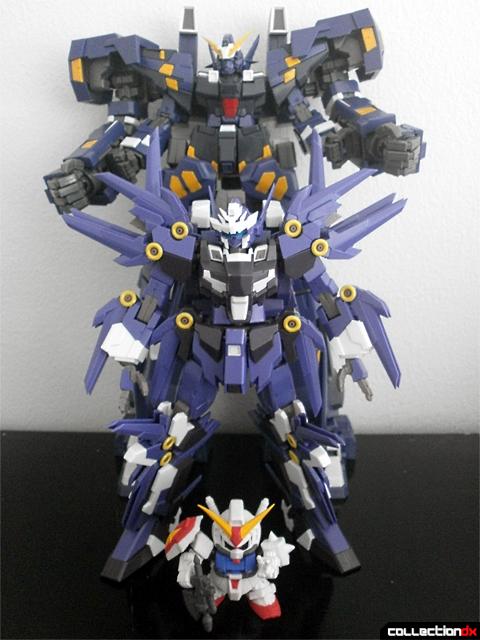 The Ex-Exbein is about 6 inches tall at the top of its head. It's a 1/144 scale kit, so it fits right in with High Grade Gundam kits. The manual says the actual height of the Ex-Exbein is 19.2 meters, as tall as your average Gelgoog (but with a lot more loaded on it). But it's still dwarfed by its predecessor, the Huckebein Boxer. 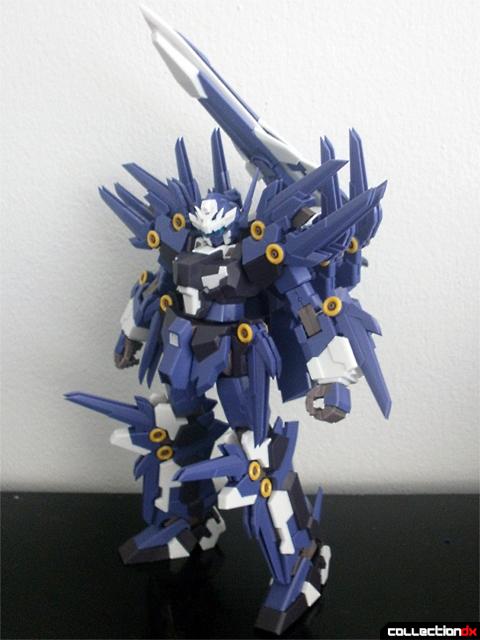 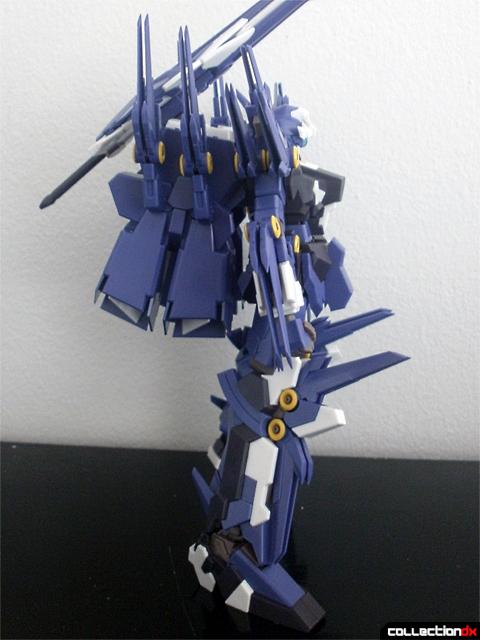 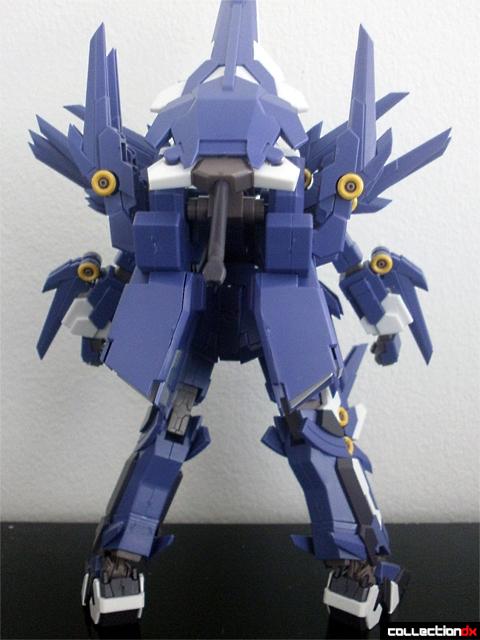 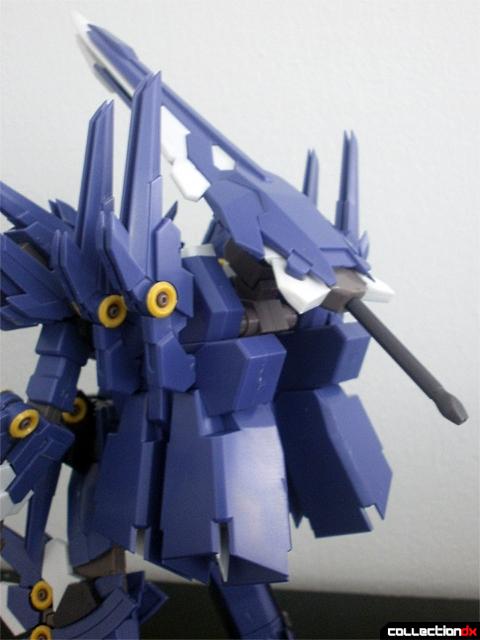 Surprisingly the Ex-Exbein has no problems balancing even with its full loadout, a wonderful change from Kotobukiya's previous G-Compati Kaiser kit. The backpack is large but not too heavy even with the shield and saber attached. 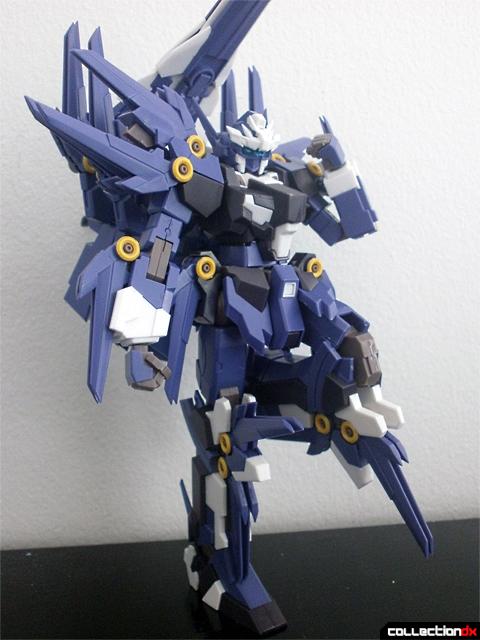 Articulation is superb, both arms and legs have nearly 180 degrees of movement. Front skirt armor is individually articulated, and the ankles alone have four points of articulation. Not to mention the Ex-Exbein can balance on one leg without support. Kotobukiya has definitely come a long way since the original Huckebein kits. 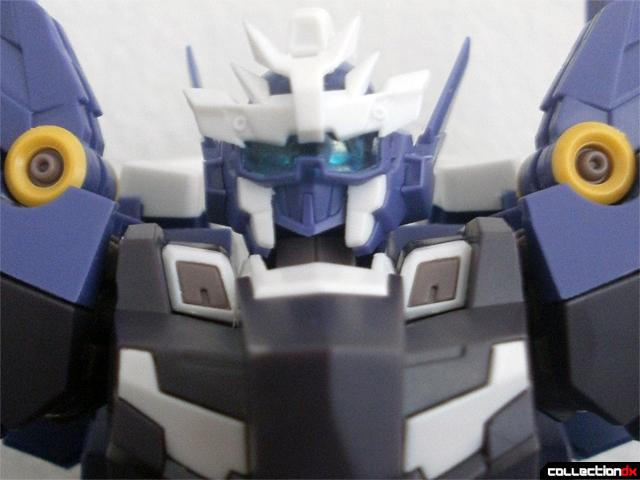 The face has the only two pre-painted pieces, although you can barely notice the eyes behind the visor. 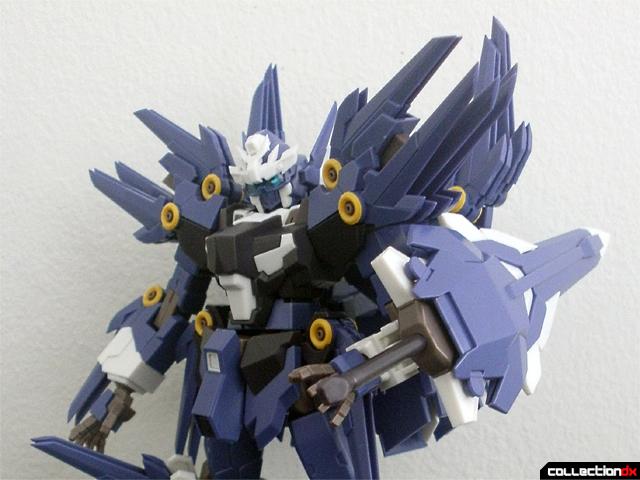 Now for the weapons. The Gravitron Rifle is conspicuously absent, but all of the Ex-Exbein's most distinctive weapons are here. The combined TK Shield and Saber attach to the left arm if you remove one of the Sliders. 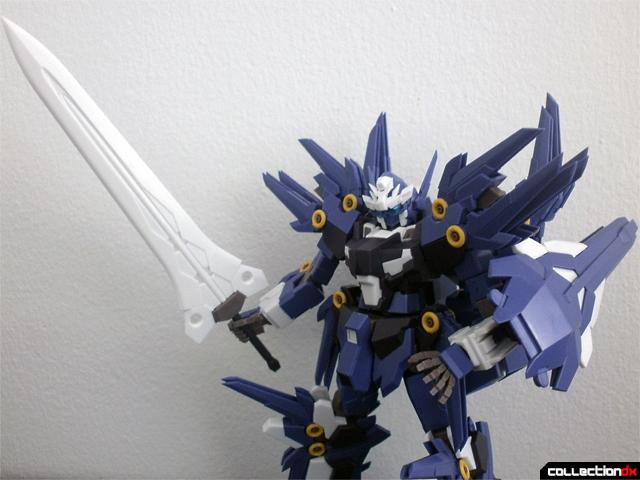 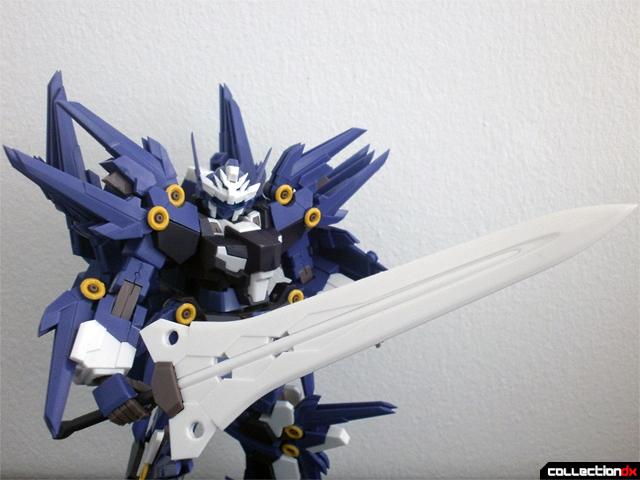 The Saber unsheathed would look much better if it was painted, the center of the blade is supposed to be gray. Why another few pieces couldn't have been included to remedy this, I couldn't tell you. 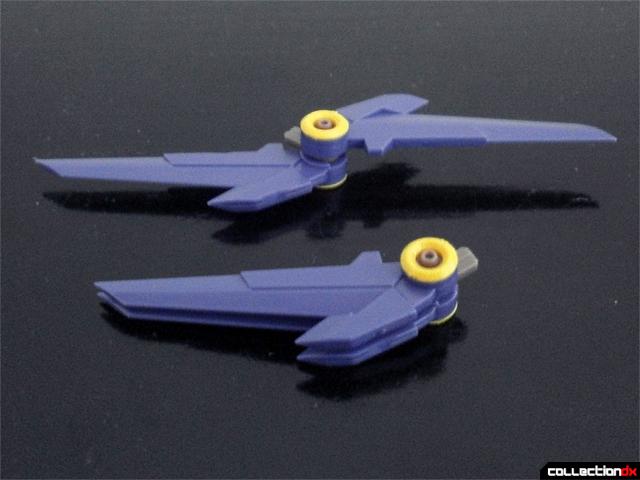 Next, the TK Sliders. There's eighteen of these covering the Ex-Exbein's body (and let me tell you, seeing “x18” on a model kit manual is incredibly intimidating). It looks its best with them on, which is good because there's no way to display them otherwise unless you bought this from Kotobukiya's actual online store, which includes clear parts for display the Ex-Exbein purging them for one of its final attacks. 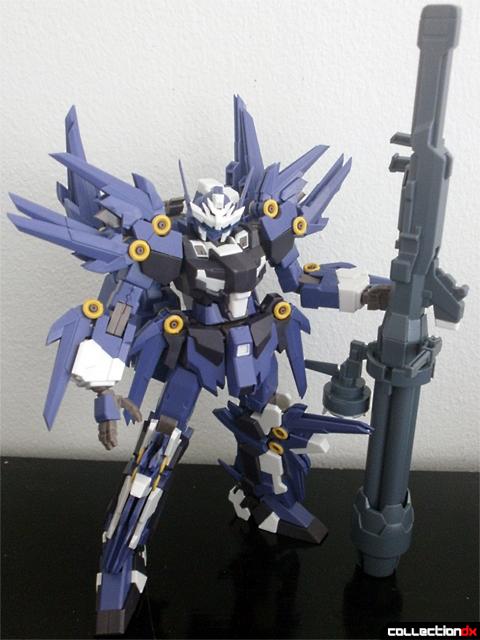 Lastly, the most important weapon for any Huckebein or its successor, the Black Hole Buster Cannon. In-game it does exactly what the name suggests. It's a wonderfully oversized weapon, and as such it's a little tricky to get the Ex-Exbein to hold it properly at first. 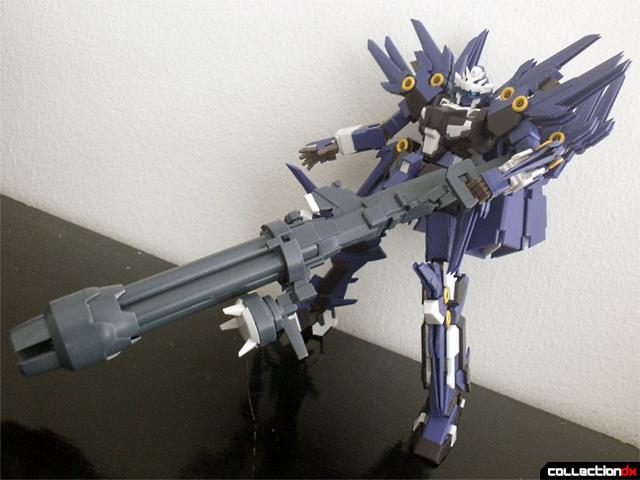 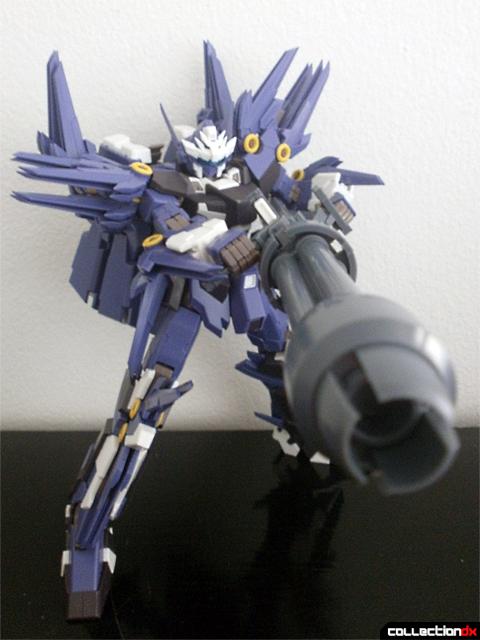 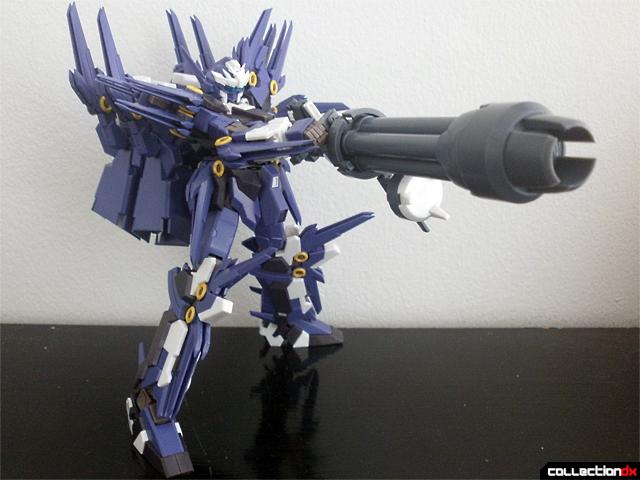 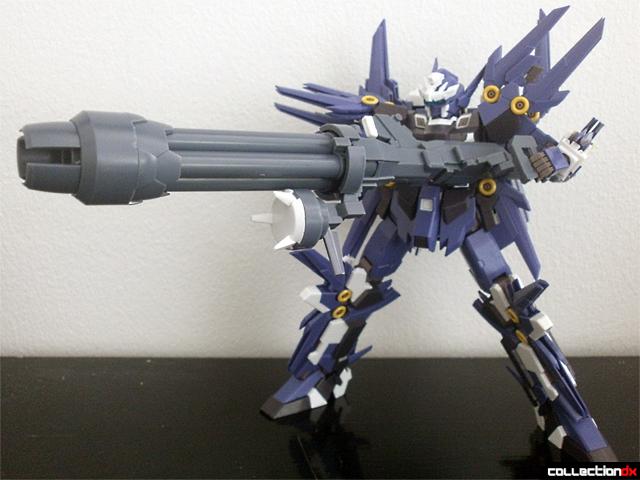 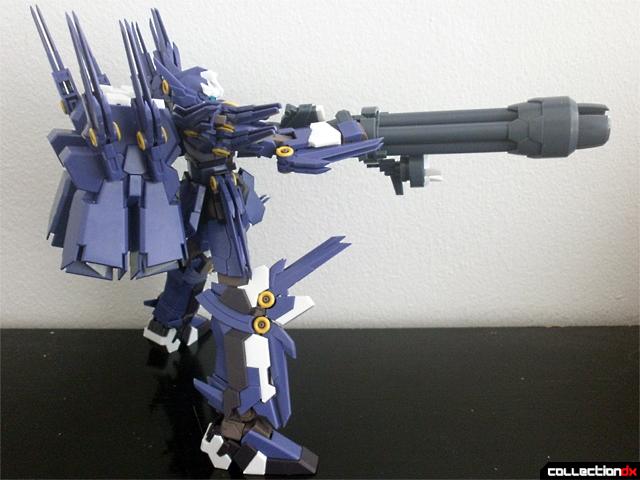 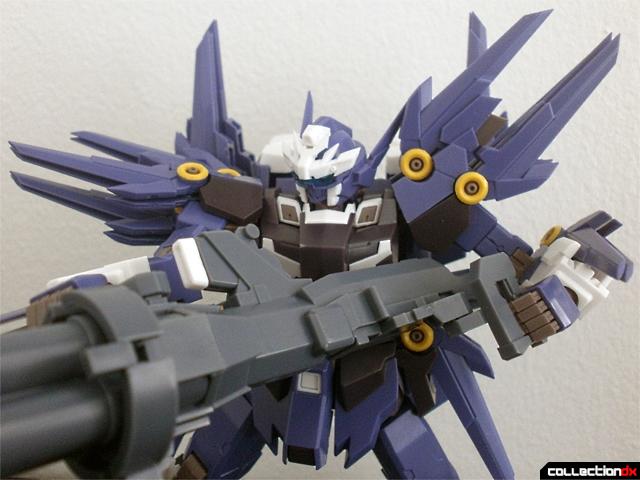 Equipped with the Buster Cannon the Ex-Exbein looks cool from any angle, ready to unleash its ultimate finisher. This is another nice change from Huckebein kits of old, which could barely hold their questionably placed Black Hole Guns.

While it came nearly two years after the release of the game it debuted in, the Ex-Exbein was well worth the wait. I'd highly recommend this to any Super Robot Wars fan or any moderately experienced model builder who's just looking for a cool robot to build.

Seeing 'x18' in a manual is intimidating? Just do what I do and say "I'm no stranger to repetition." Once you get into a grove and you can make x18 go 18 times faster!

Really great review, glad to see some SRW kits. I hadn't realized you built the Huckebein Boxer!
Not to call myself out on it, but I shied away from SRW models after the 1:144 R-1 crumbled in my hands.

I have to say though, that looks really sharp! Nice build!

Just do what I do and say "I'm no stranger to repetition."

Yeah, it ended up not being bad at all, but 90 pieces just going into a robot's remote weapons seems unprecedented on anything that's not a Perfect Grade kit. And thank you! I've been building for a while, and I've got a fair amount of Super Robot Wars kits. My next goal is to hunt down the Ialdaboath and the Aussenseiter. If any of the new SRW kits strikes your fancy, I'd definitely recommend them, they've come a long way since the R-1.

Good to hear about the kits, though!

I'm not really a model kit guy, but your writing is really good, and you're knowledgeable about the subject matter without being too heavy-handed. More than that though, you fill out the info box, and I can't tell you how happy that makes me. I'll be looking forward to more reviews from you!