The Nendoroid series has proven itself to be an unstoppable force in the world of anime collectibles in a way not unlike a hoard of invading aliens. It seems like everything these days gets made into a Nendoroid like Hatsune Miku, Iron Man, Macross Frontier characters, Hatsune Miku, and even the titular monsters from Attack on Titan. It came as a pleasant surprise to see characters from Muv-Luv Alternative: Total Eclipse make their way into the world of big headed articulated figures.

And they even brought "friends." 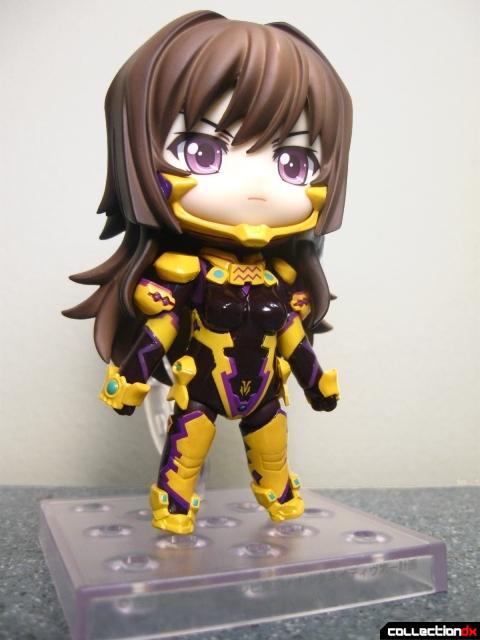 The 293rd Nedoroid depicts Total Eclipse heroine Yui Takamura in her eye catching Fortified Suit rendered in a cute chibi style. She is made almost entirely out of PVC plastic and features some impeccable paint work by Good Smile Company. 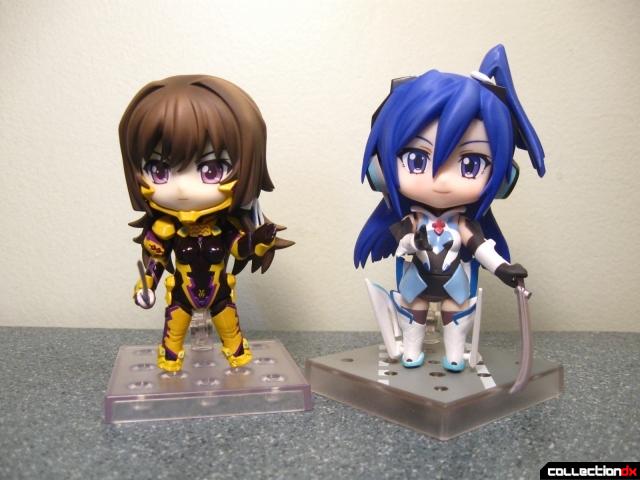 Like most Nendoroids, she is about three and a half inches tall. Here is Yui with another sci-fi fighting lady, Tsubasa Kazanari from Symphogear. 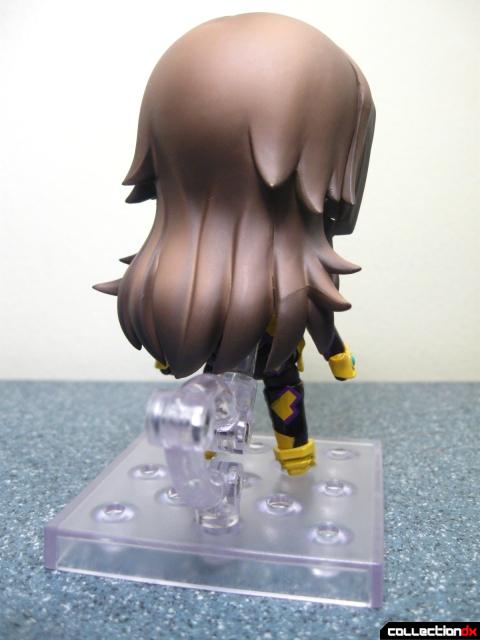 Due to the size of her big ol' noggin, she needs to be connected to her display base to stand up. 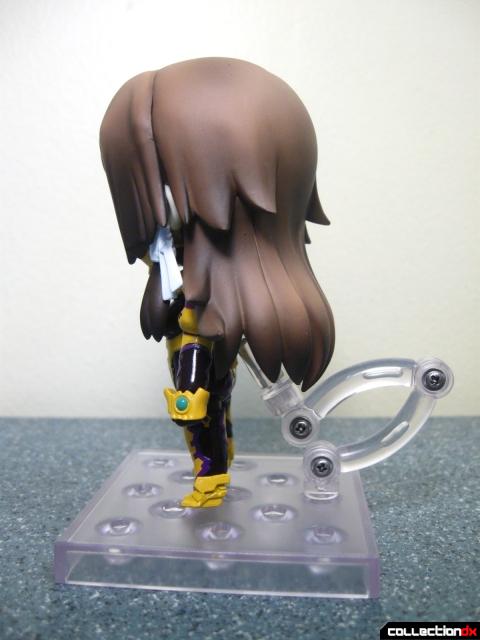 The articulated clear plastic arm attaches to a small hole in her back and fits under all that luxurious hair. 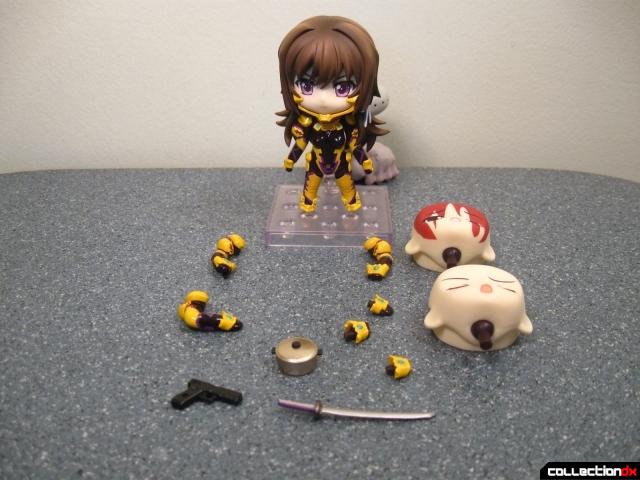 Yui comes with a good number of accessories which include two extra arms with bent elbows, an arm for saluting, several interchangeable hands, a cooking pot, a pistol, her katana, and something else that lurks nearby. 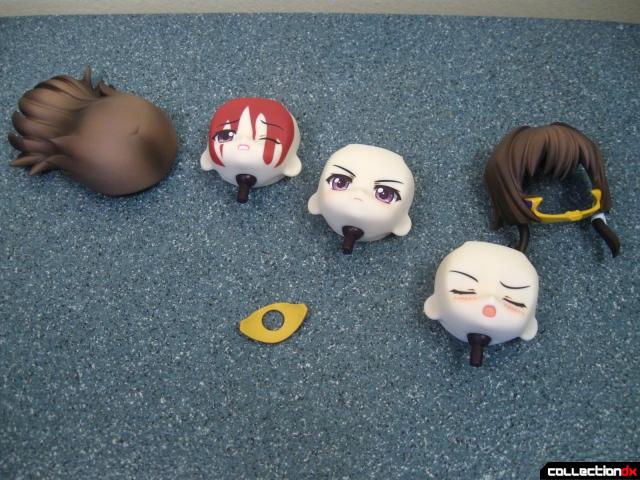 Swapping heads is a simple matter of prying the front part of her hair (along with the chin guard) off from the current head piece. Yui also has a little collar that fits in between her head and neck that is meant to cover the bare flesh under her chin just for authenticity. 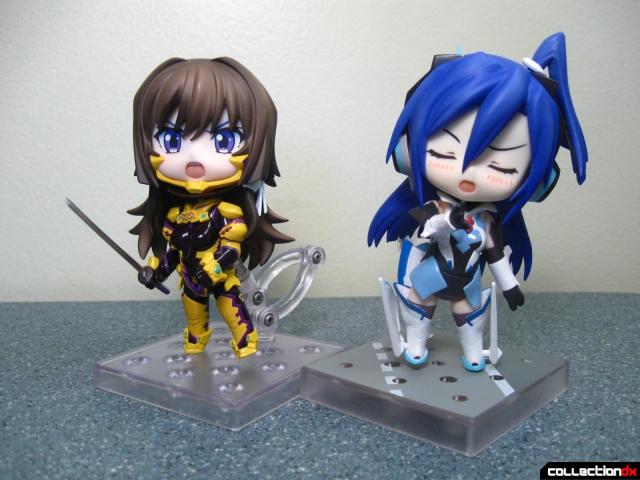 Almost all Nendoroids can share faces which allows for even more expression filled fun! Both Yui and Tsubasa have purple eyes so they even kind of match. 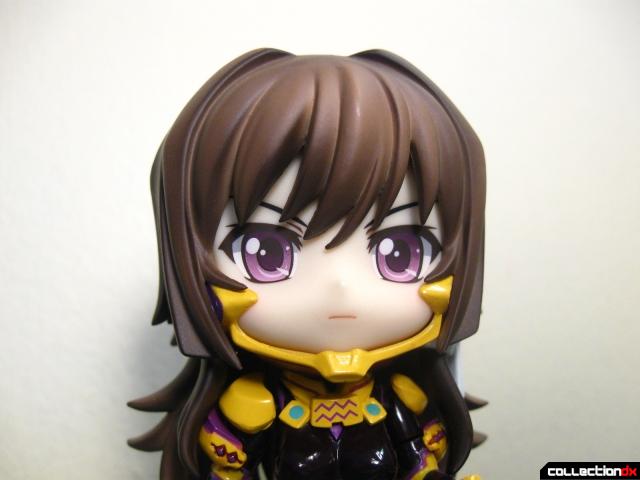 Her default expression is a calm, determined look as befitting the pilot of a sweet giant robot. 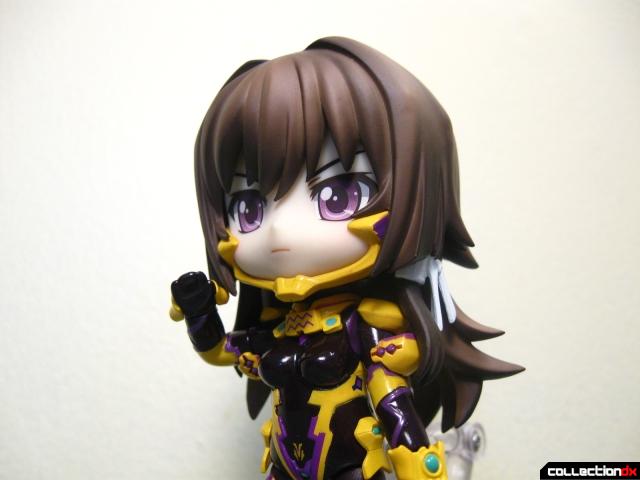 Even this chibi-fied version of Yui stills exudes the dignity of an officer in the Japanese Imperial Army who is also wearing a ridiculous sci-fi pilot's suit. 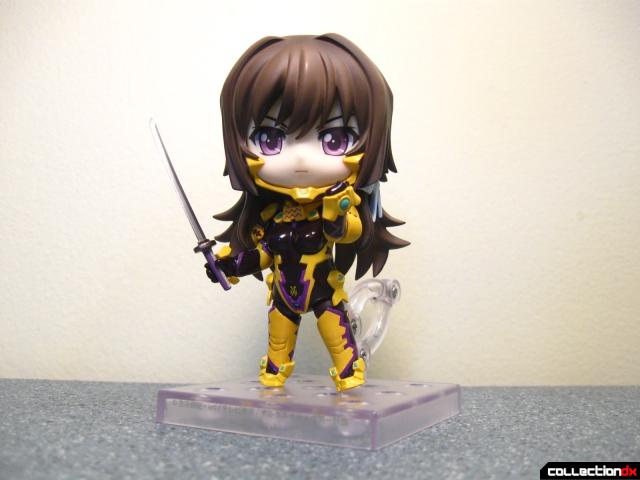 Her sword can fit into either of two specially designed hands. Yui's family katana is a good (and cute) looking weapon that fits the overall Nendoroid aesthetic. Yui's neck and legs feature the standard Good Smile style universal joint that lets her do some basic poses. Her different arms plug in at the shoulders and can swivel up and down. Likewise all of her hands just peg in at the wrist so she has some articulation there as well. 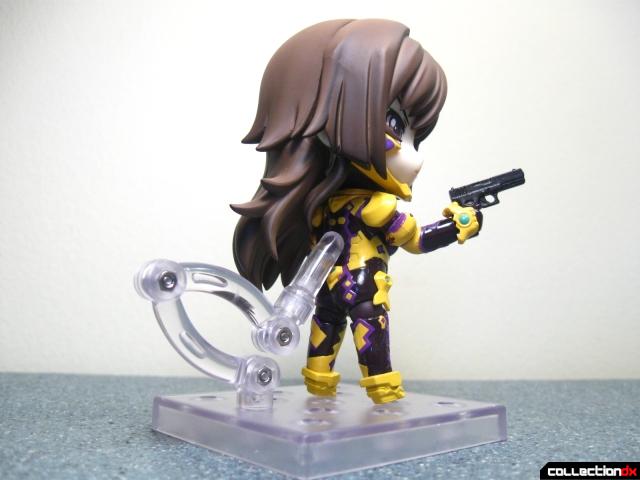 Yui's more typical weapon is a small pistol like the one pilots carry after they're forced to abandon their damaged Tactical Surface Fighter. You get a specific hand for holding the pistol that has a peg in the palm that plugs into a hole in the grip. 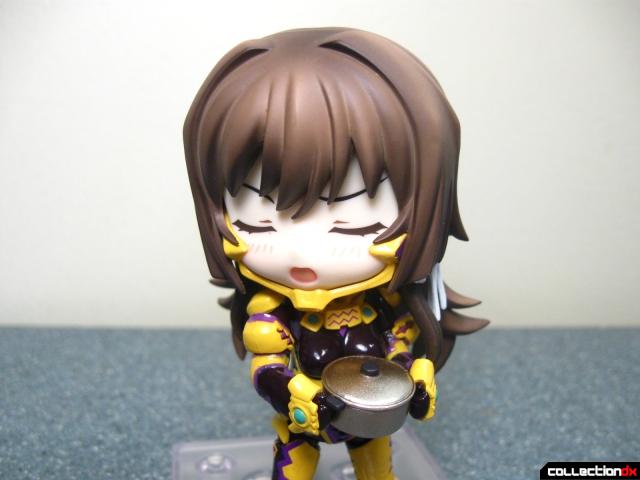 Possibly the most moe of Yui's expressions of a top notch tsundere face that's meant to work in conjunction with the cooking pot. The pot itself just kind of balances between her hands without actually connecting to them which can be irritating if Yui gets jostled and the pot falls down somewhere. 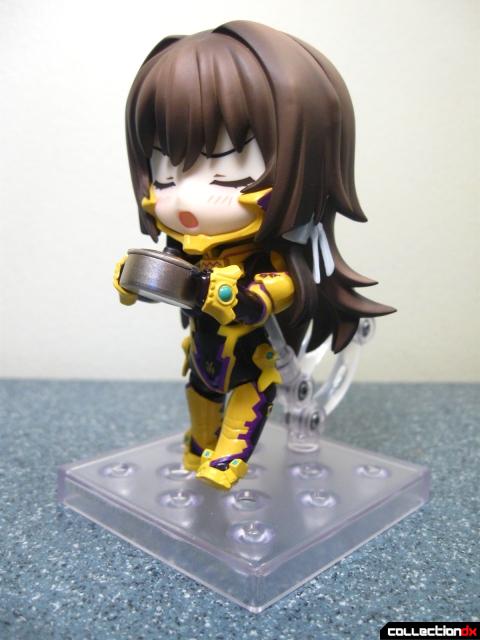 "J-just because I made this potato stew just like your mother did doesn't mean anything more!"

Overall the "harumphing" face and the pot are a funny little nod to a scene from the TV show. Of course in the show she was just chilling out a restaurant with her squad mates and definitely not wearing her pilot suit. 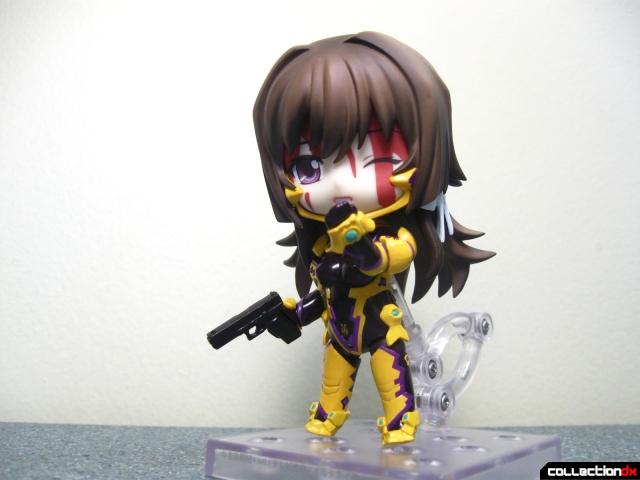 Yui's last and possibly second most moe face (in you're into that sort of thing) is her covered in what I presume is blood from some freshly killed BETA aliens. Something similar happened at the end of the second episode and I think that's what they were going for here. Either way it's a fairly fitting accessory for a character who hails from a bug war hellhole type franchise. 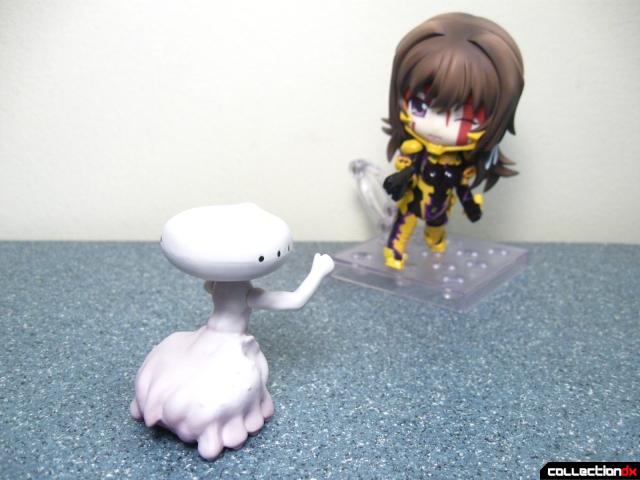 Speaking of aliens, let's talk about a particular Being of Extra Terrestrial origin which is Adversary of human race. 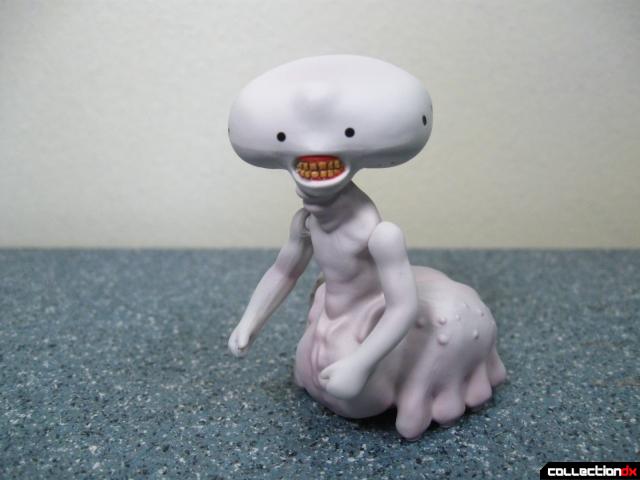 This little bugger here is a Soldier-class BETA. It is about two inches tall and has some articulation in the arms and neck. 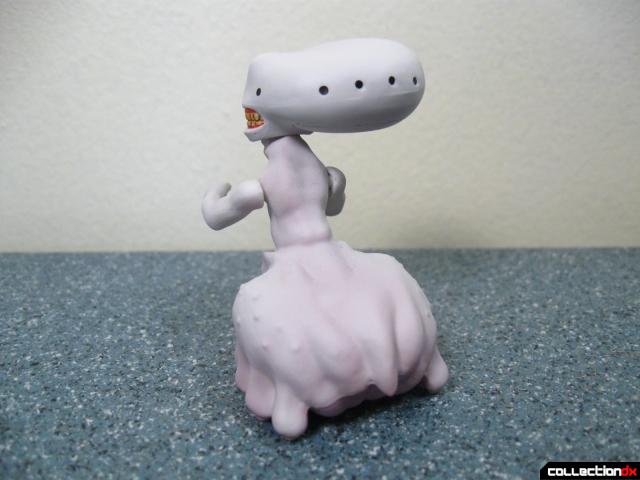 I'd be lying if I said the BETA Soldier-class wasn't one of the reasons for me purchasing this Nendoroid. There's isn't a lot of BETA based figures out there so this was a must have for a budding Muv-Luv fan such as myself. 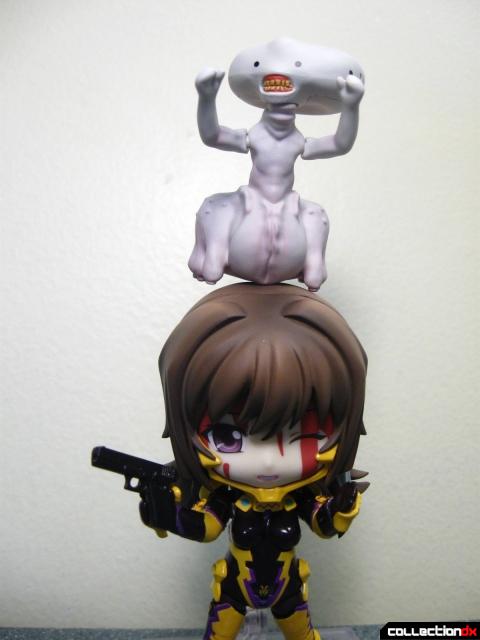 The Soldier-class is a nicely made figure that compliments Yui quite well. Not that she wants a BETA to compliment her but sometimes you take what you can get. 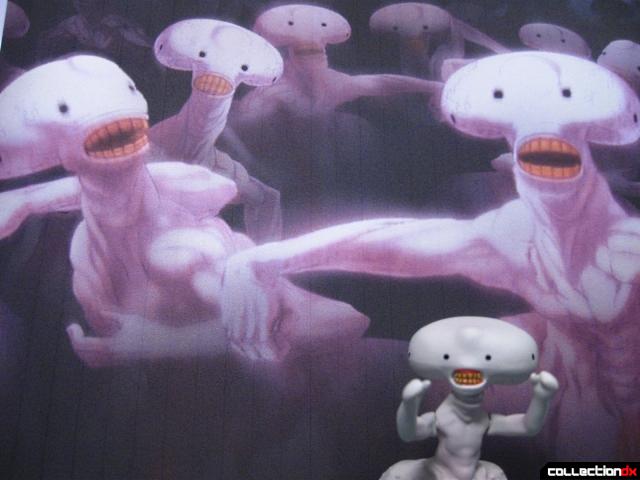 In a typical BETA incursion these guys make up a good portion of the attack. They are about the size of a large bear and are used in an anti-personnel role where they grab hapless humans and devour them. Due to their humanoid features and somewhat odd appearance, the Soldier-class is a bit of a fan favorite and is often seen in parodies and gag comics. They even got their own designer hoodies! 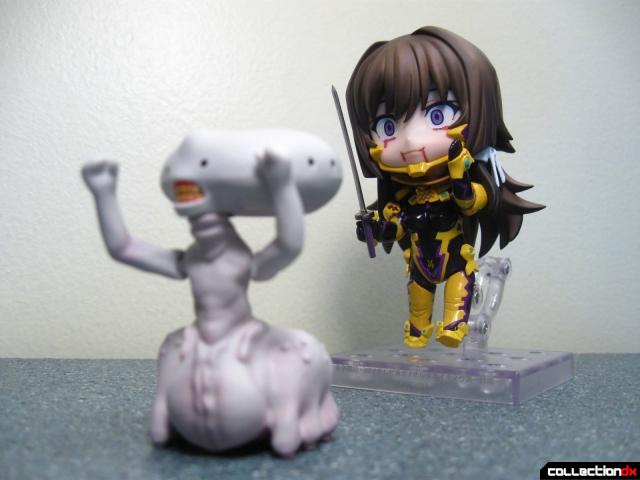 The face swap gimmick lets Yui turn the tide against the BETA invasion with the help of Tsubasa's accessories. 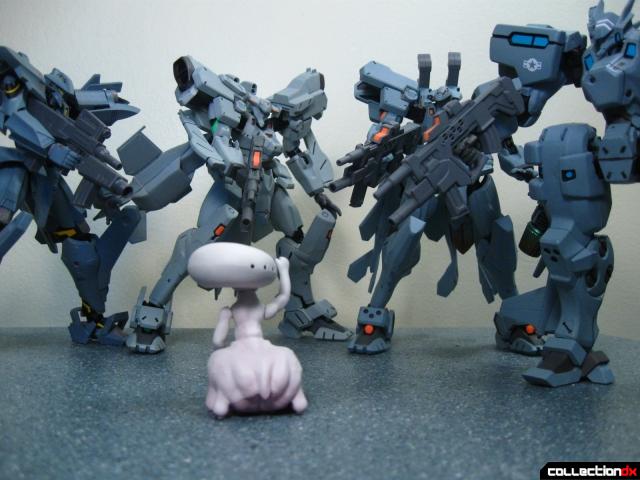 "YOU'RE ALL UNDER ARREST!"

Due to their small size and relatively slow speed, Soldier-class are ineffective against mechanized infantry and Tactical Surface Fighters and can be easily dispatched with minimal (or excessive) gunfire. 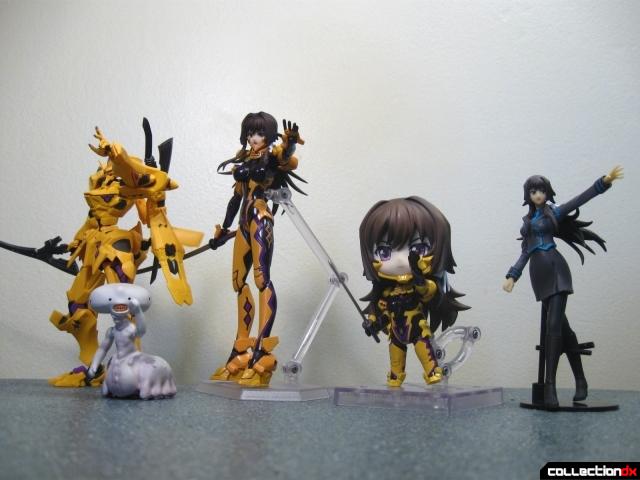 The Yui Takamura Nendoroid is a great figure and is a fine addition to any Muv-Luv fan's collection and is made even more worth by the inclusion of the BETA Soldier-class. Right now Yui is the first of three planned Nendoroids with the next two being Soviet pilots Inia and Cryska, both of which come with their own BETA "friends." I hope Good Smile continues to produce Muv-Luv Nendoroids just a little while longer because you have no idea how much I need a BETA Destroyer-class in my collection.