Muv-Luv's humble beginnings as yet another romantic comedy themed visual novel would soon to give rise to a notable mecha franchise with a reputation for both savvy sci-fi writing and lots of female characters who look like swimsuit models. Among the uninitiated, the idea of a legitimately compelling story told in what is classified as an "adult game" seems pretty daft. I can confirm after finishing both Muv-Luv Extra and Muv-Luv Unlimited (and starting Alternative), however, that the explicit content is minimal to the point of being token. In fact it is so inconsequential that the three main games were re-released on home consoles with the explicit content removed with no impact on the story. It's kind of like how a lot of classic 80's movies would throw in a sex scene just to bump up the rating. Although that isn't to say people in the story don't play some good old fashion anime grab ass from time to time.

With all that being said, there is one eyebrow raising aspect of Muv-Luv that brings equal amounts of praise and criticism for being delightfully tacky yet refined. Enter the chosen garb for pilots: the Fortified Suit. 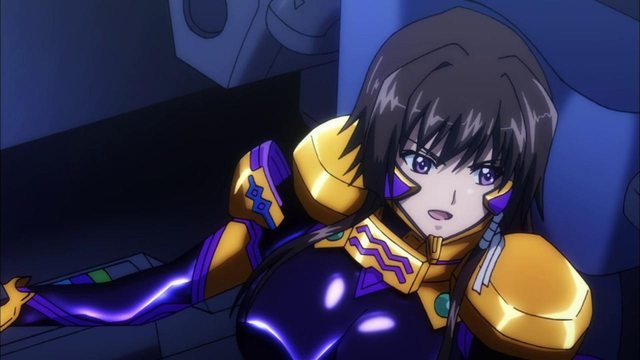 Lieutenant Yui Takamura rides into battle aboard her Type-00F Takemikazuchi.

Science fiction in general (and mecha especially) is no stranger to skin tight outfits being presented as perfectly legitimate clothing used by a technologically advanced military. Even the great Leiji Matsumoto appeared to have a fondness for rather flattering spacesuits. When people hear the name "Muv-Luv" (or type it into Google) it's hard not to get images of characters wearing these ridiculous outfits. The mad geniuses at âge may be terrific writers, but they also know what pays the bills. In a way I can sorta respect their forthright approach to merchandising even if I don't personally indulge in it. Like some Muv-Luv fans, I just smile and accept that sometimes all the sexy robots engaged in sexy military action directed by sexy political drama need some sexy outfits to balance everything out. And thus, every spinoff visual novel, manga, and anime adaption has featured people wearing Fortified Suits in some capacity. During the Muv-Luv Alternative: Total Eclipse TV series, they were on full display. 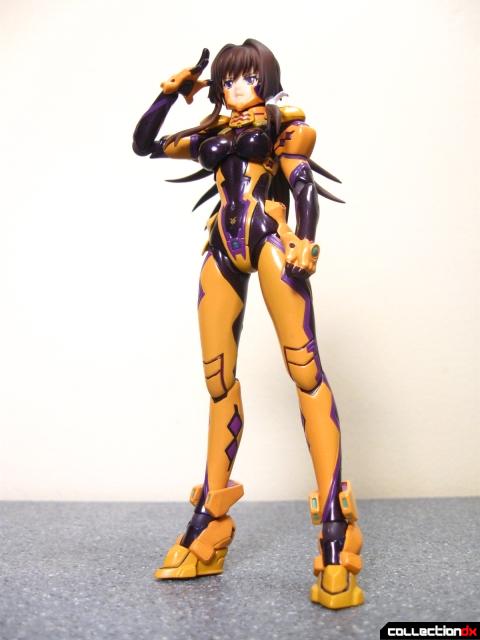 This Figma depicts Yui Takamura from Muv-Luv Alternative: Total Eclipse wearing her Fortified Suit. Max Factory brought their typical high quality construction into crafting this six-inch figure. Yui's Fortified Suit is nicely rendered with an appropriate amount of detail and some intricate paint apps all along the torso and limbs. 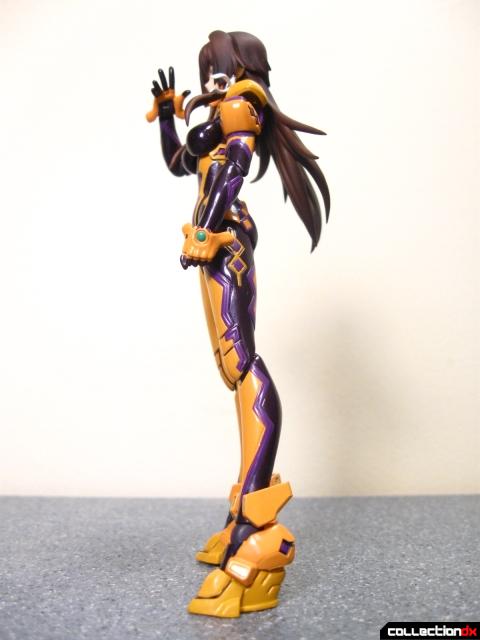 Like any good sci-fi outfit, this seemingly thin material is a highly advanced reactive film that hardens when outside force it applied to it providing superior protection against G-forces and other associated rigors from piloting a jet powered giant robot. It's even rated to stop a heavy iron training pipe! And the platform heels are clearly there for shock absorption. One thing that can look weird from certain angles is how her upper body is divided from the abdomen in order to facilitate a chest joint. 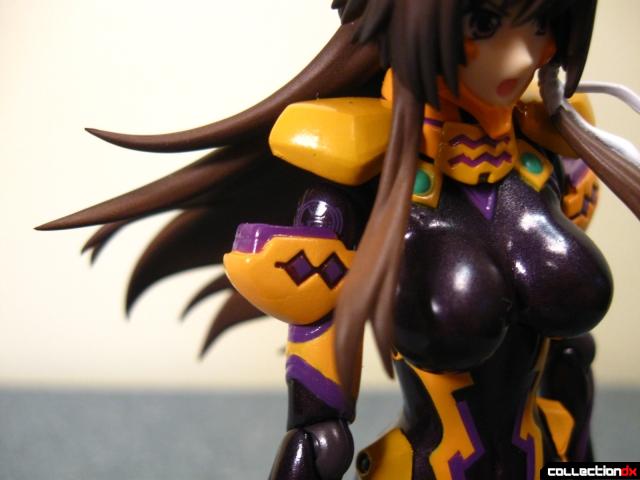 The small details even extend to an emblem carefully applied to each of her arms. I took me awhile to even notice it was there since it's hidden near the bulkier parts of her Fortified Suit. 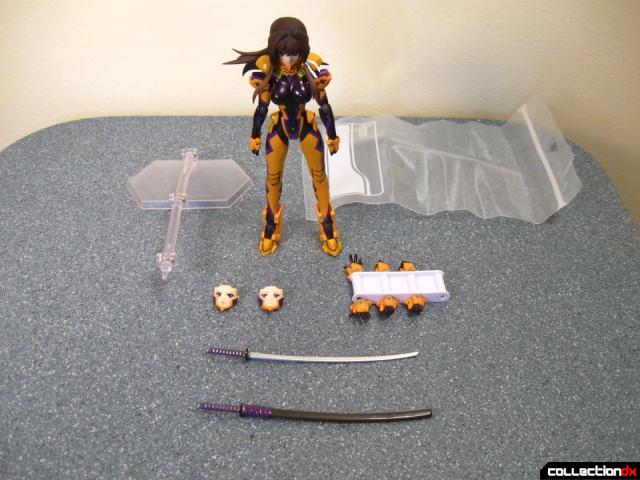 Yui comes with a small number of accessories which include a full set of optional hands (complete with a handy hand holder), a Figma stand, the official Figma baggy, a pair of additional faces, and two versions of her sword. Her lack of accessories can be attributed to that fact that she really doesn't have a lot of gear by design. She is merely wearing a pilot suit, all she could really use is a cockpit to sit in. It's kind of a shame she doesn't since the cockpits in Muv-Luv can convert into powered suits for added survival in a combat zone.

Yeah that's right, Muv-Luv did it first! In your face Macross Frontier! 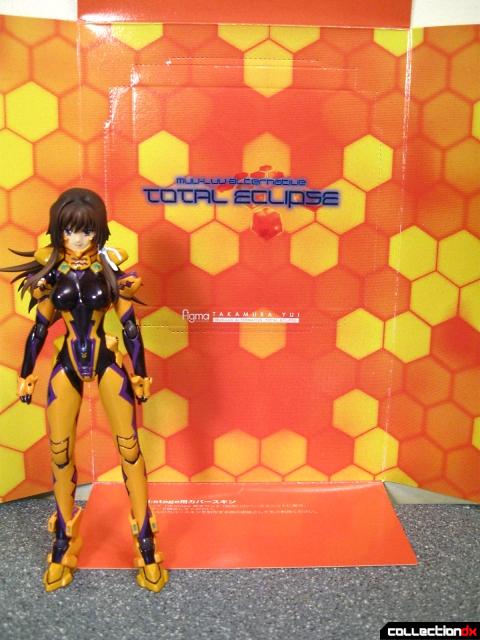 As a bonus, the cardboard backing inside the box can be used as a backdrop for the figure and also the middle can be punched out to be used as a personalized cover that fits over a Figma Di:Stage. 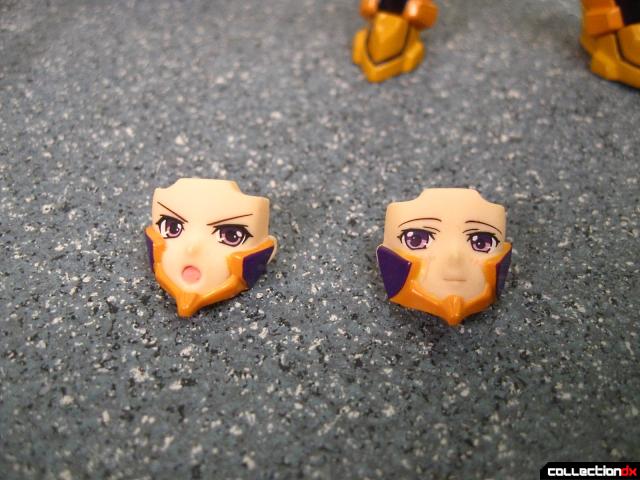 Her two alternate expressions include a yelling face and an embarrassed looking face. Sadly on my figure the embarrassed face has a defect on the left side. I don't think this is very common problem as this is the first time I've seen it happen. Swapping the faces is easily accomplished by pulling the front part of Yui's hair off and then removing the current face to swap in another. 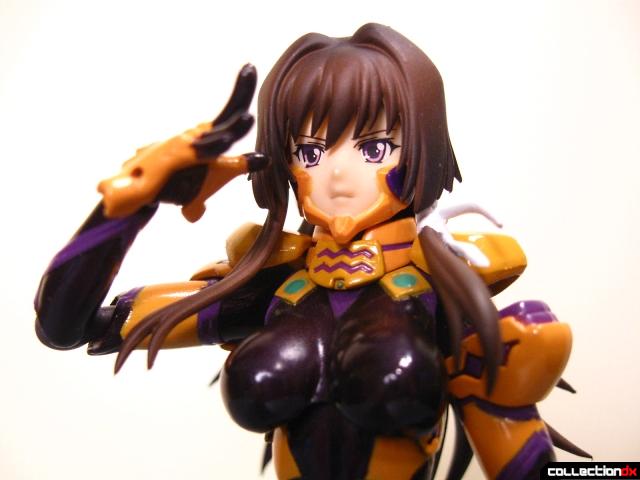 The official Good Smile Company product page for Yui describes her as having "eyes filled with strong determination and conviction" and one can definitely see that with her default face. Much like in the series she has a very commanding look about her befitting her role as a high-ranking officer in charge of overseeing the development of new Tactical Surface Fighters. As a minor quibble, I do wish she had a normal saluting hand but the splayed hand works well enough to show proper military etiquette. Aside from the defect on the one face, all of them have crisp tampographed eyes and very clean molding. 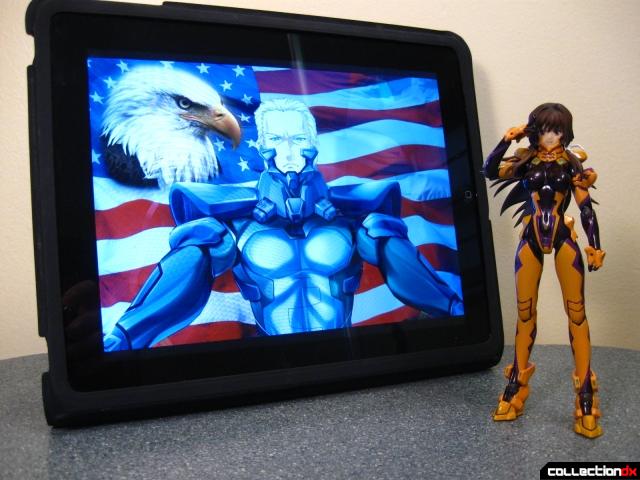 One thing I appreciate about Muv-Luv is how both men and women have to wear ridiculous outfits when piloting their robots. The whole idea being that suits like these will help break down the boundaries between genders and help everyone join together to fight against the implacable BETA hoards. You see the BETA are totally above sexism when they're chowing down on your intestines. It's pure anime BS, but it's kind of charming how Muv-Luv plays it pretty straight. Some men, like the freedom loving all-American Alfred Walken, wear a Fortified Suit with real machismo. 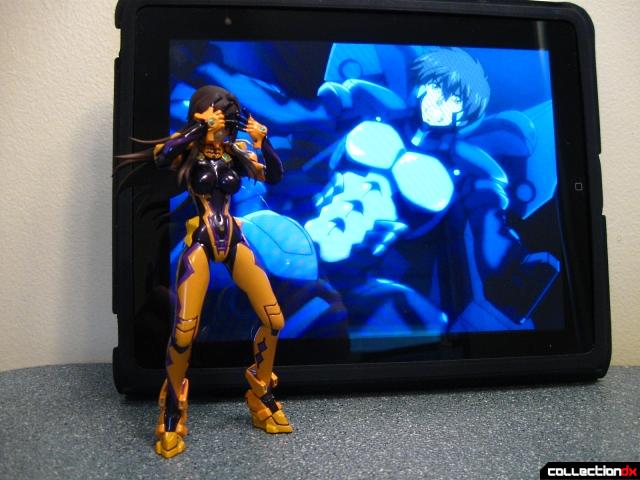 While others like Yui's subordinate Yuuya Bridges, can seem a bit daft when wearing one and failing to do anything right with his giant robot. Yuuya really acts like an embarrassing older brother to Yui sometimes. 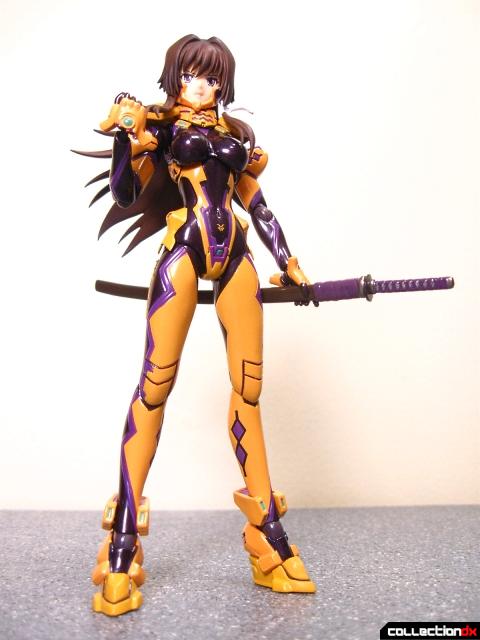 Yui's signature sword is her only major accessory. You get two variations of the sword with the first being one that's held in its scabbard and fits into a unique left hand part. The sword does a lot to give Yui a very authoritative look even if she never really carried it around during the TV series. 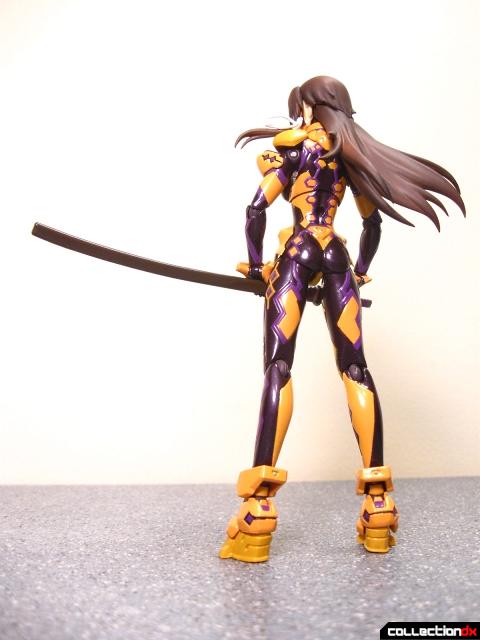 While Yui's articulation is quite good given the figure's emphasis on the sculpt, there is still one major weak point. Due to Yui's military approved long hair, she can't turn her head very far or even look up and down too much. While there is a full joint inside her head, the rigidity of her hair coupled with the solid protective collar around her neck means everything bunches together. The long tufts of hair on either side of her face are made out of a softer more flexible material so they can move over her shoulder pads. 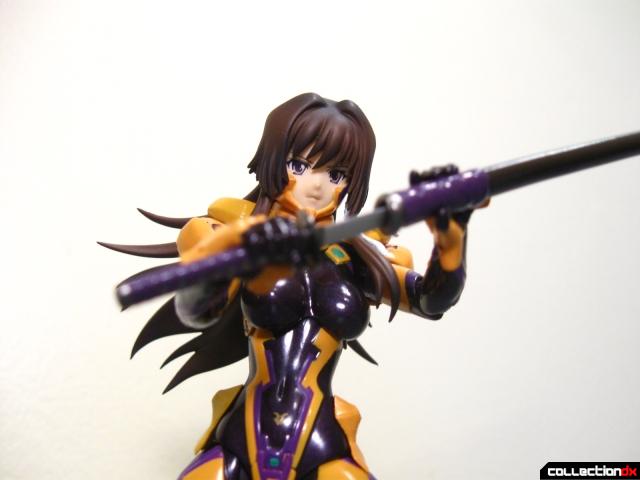 Neck issues aside, Yui's range of movement is quite good and is precise enough so she can actually draw her sword from its scabbard. 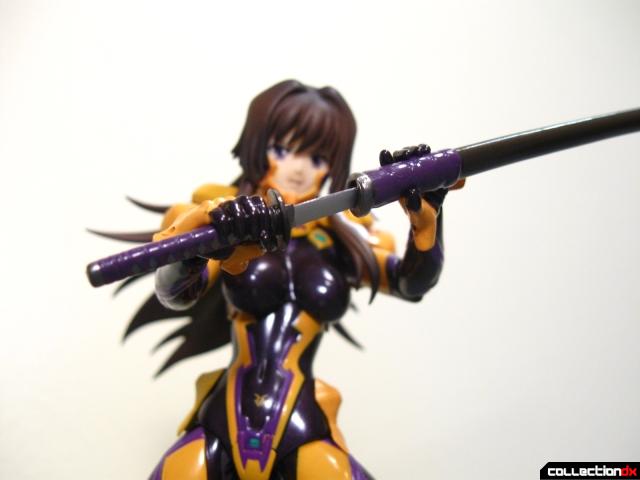 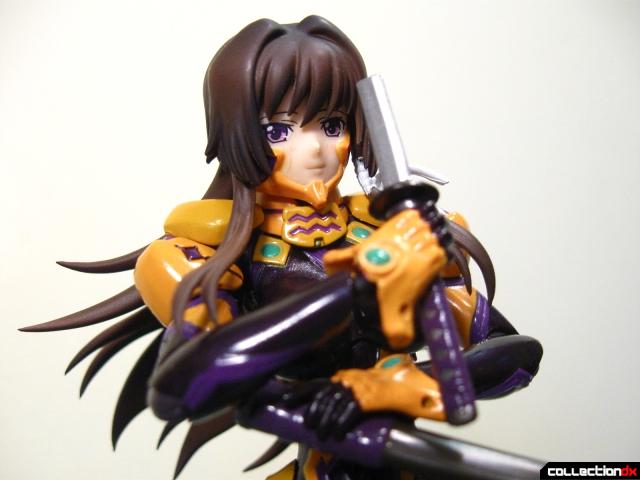 Of a sword stump.

In order to prevent paint scratching on the main sword, you get a little stump just for putting in the scabbard. 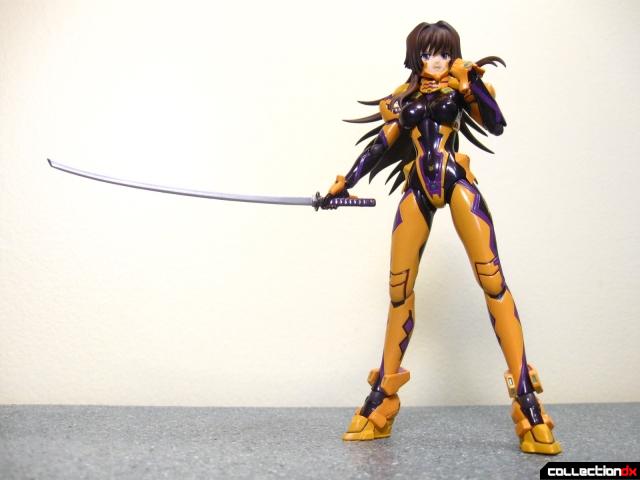 Yui looks great when wielding her sword. She comes with two right hands for holding the sword at different angles. 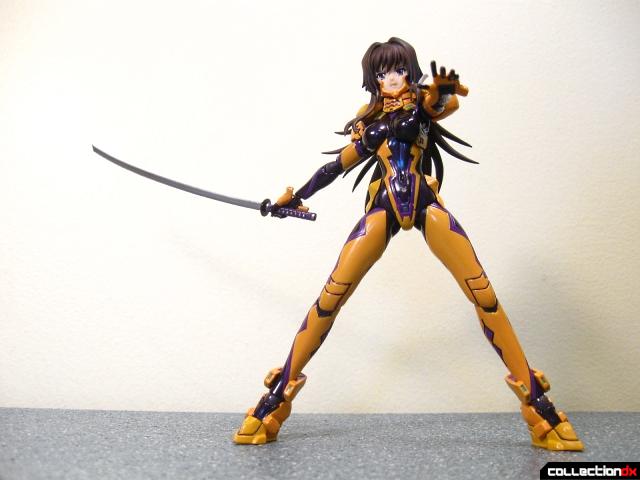 Despite how it looks, her fashionable footwear does afford a lot of outward leg movement while keeping her feet flat on the ground. The trick is that the heel itself can tilt left or right. The main ankle joint for bending up and down is situated in the appropriate place separate from the heel. 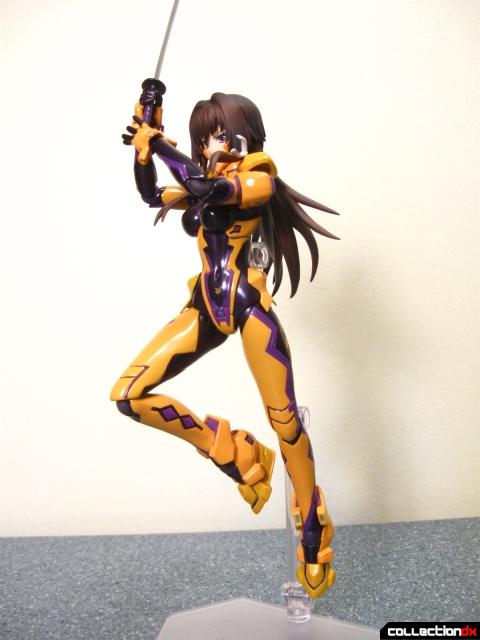 The included Figma stand lets Yui get a little air time. She has a good range of motion in both her hips and knees. Each small flap on her hips is flexible so they can conform to her legs when she poses. Even her big shoulder pads can flex up to give her arms more room to move about. Again she did more against BETA aliens with a high powered anti-tank rifle than she ever did this sword but who am I to argue with a badass katana? 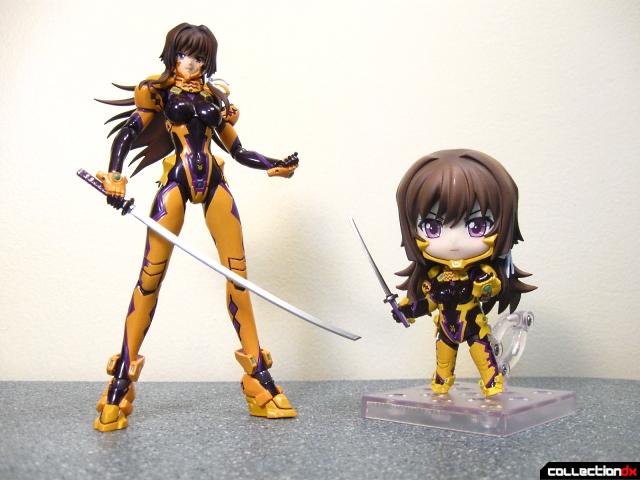 The Figma of Yui Takamura looks great alongside the matching Nendoroid, which is another Good Smile product. It is a little funny that the big-headed Nendoroid has better neck movement than the Figma. 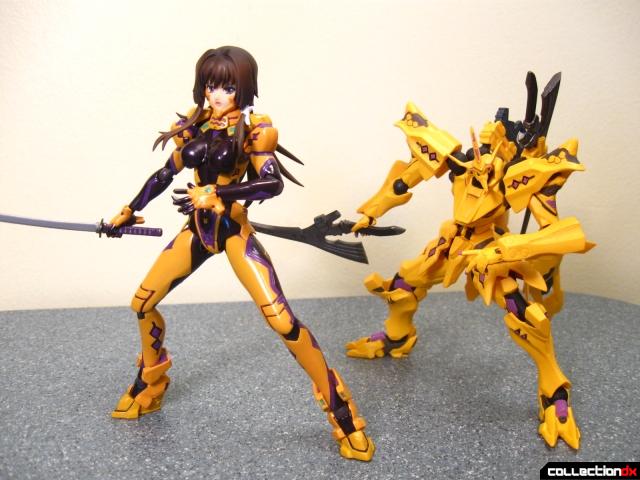 Yui is very well matched with her Takemikazuchi. Members of the Japanese Royal Guard all wear Fortified Suits that match the ornate styling of their Tactical Surface Fighters. 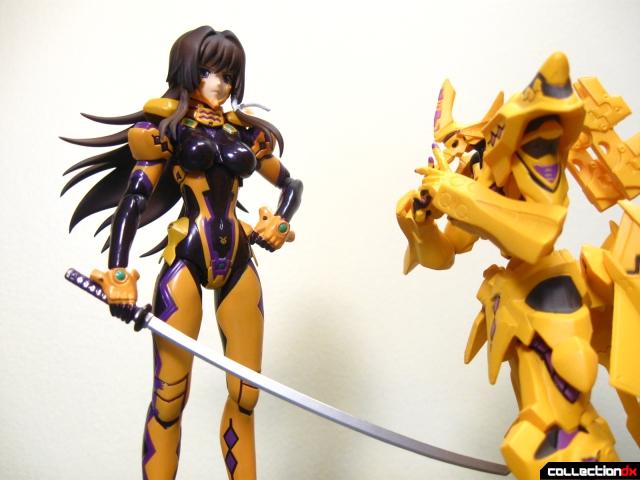 Since the Takemikazuchi is supposed to be about 60 feet tall, this isn't exactly an "in-scale" meeting.

"Ah I apologize, Yui-sama! I don't think you can fit inside me. We'll just have to fight side by side."

"Nonsense! A rider and her mount are one and we must adhere to this truth. I know of the perfect way we can still fight together!" 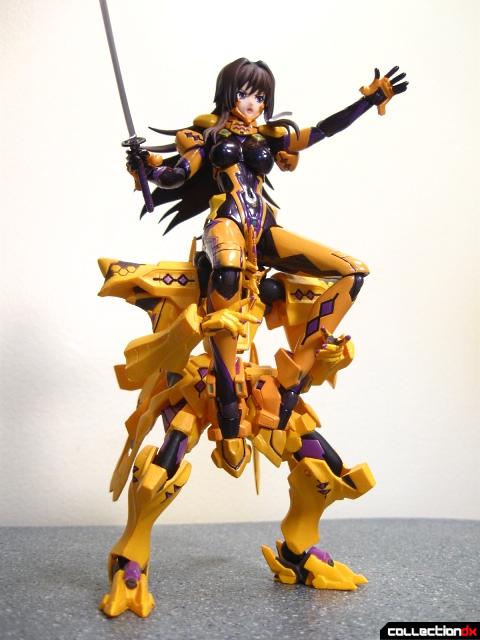 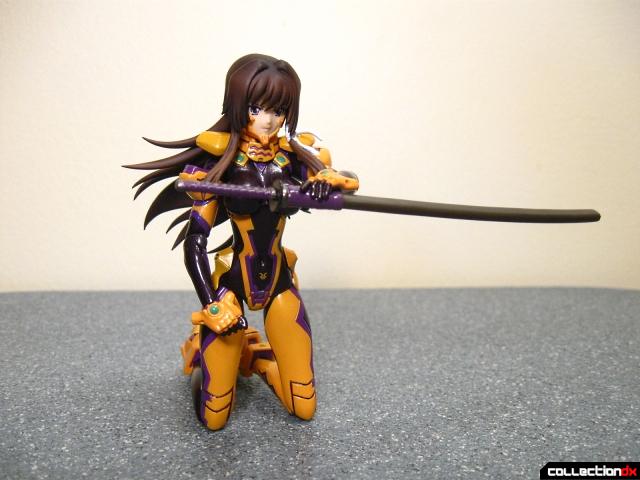 In addition to action poses, Yui's articulation allows her to to sit on her knees and meditate. 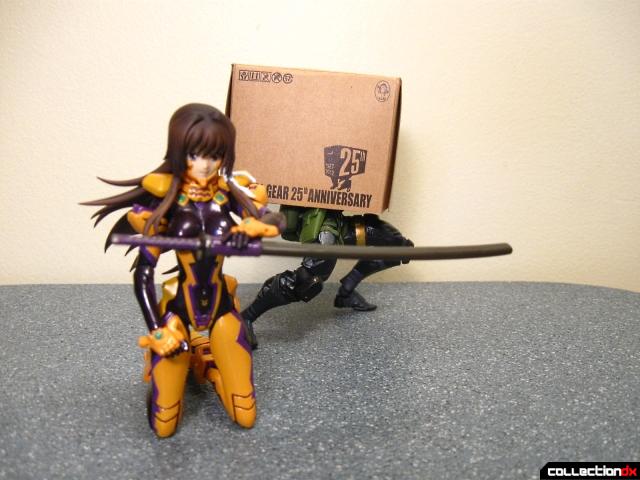 While she may seem completely fixated on her sword... 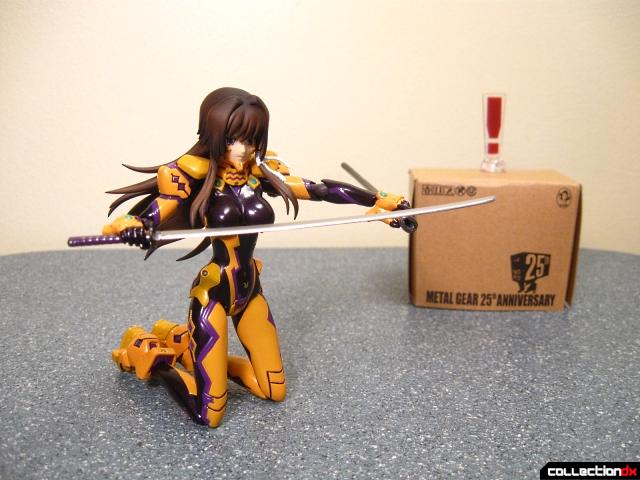 Her senses are being focused so that even the quietest approach does not go unnoticed... 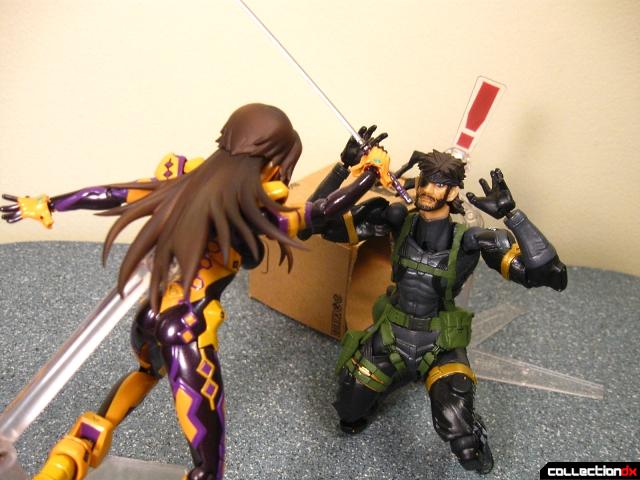 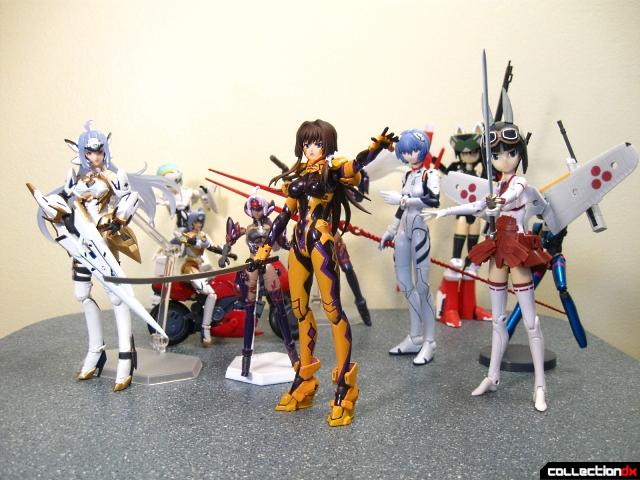 The Figma of Yui Takamura is overall quite an excellent rendition of the character in one of her more recognizable outfits. As a very sharp looking figure that has commanding presence she is perfect for both Muv-Luv fans and those who fancy another sci-fi themed fighting lady for their shelves.

ive seen this figure in your other photos for different reviews and thought it was a static statue, the places where the limbs attach to the body (most notably the hips) are integrated so well!

Thank you! Yeah it's pretty amazing how much the Figma looks almost as seamless as some of the fixed pose figures of Yui.

"Of a sword stump. In order to prevent paint scratching on the main sword, you get a little stump just for putting in the scabbard. "

I actually really appreciate that there's a segment of blade on the sword stump, so she can be displayed in the middle of drawing it from the scabbard (Or about to do that little "click" thumb gesture that all the coolest samurai do when they settle back the blade).