By far one of my favorite parts of Kamen Rider Fourze were the Zodiarts. The monsters infused with the essence of the galaxy that gave them superhuman powers were incredibly ornate and oozed with that stylistic liberty that I love so very much. In addition to the Zodiarts, the series had twelve major baddies known as the Satellites or Horoscope Zodiarts. Based on the astrological signs of the Zodiacs, these monsters were gold trimmed, super powered, and given really swanky gold capes. I loved everything about them, especially the first one that we see in the series, the Scorpion Zodiarts.

The Scorpion Zodiarts is the first S.H. Figuarts monster release that is not a web exclusive. This came as a shock to me since when I first heard about the design getting a toy, I immediately assumed that meant it would be a web exclusive. Imagine my surprise when I wake up one day and suddenly people are yelling on the internet about how preorders went up last night for the Scorpion Zodiarts. I'm not going to complain though, since this figure is probably the most beautiful S.H. Figuarts I have had the pleasure of handling. 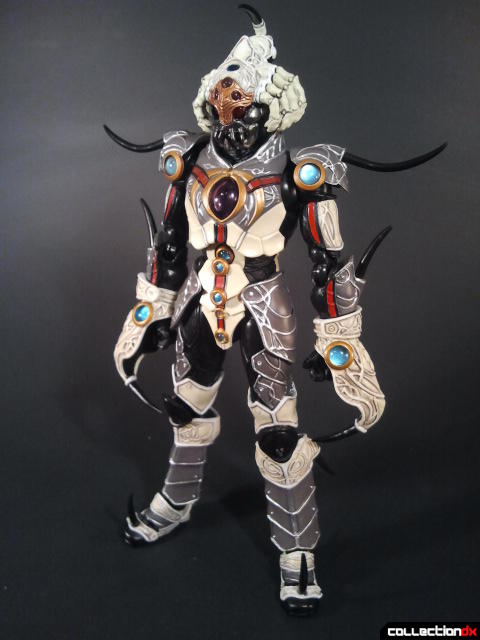 After first getting the toy out of the packaging the first thing I noticed was just how much sculpted and painted detail there was on it. The Scorpion Zodiarts is covered in layers of intricate and subtle sculpted lines with loads of well done paint applications everywhere. It's such a large departure from the usually pretty simplistic and clean design a lot of Kamen Rider or Super Sentai often use, and not in a bad way at all. 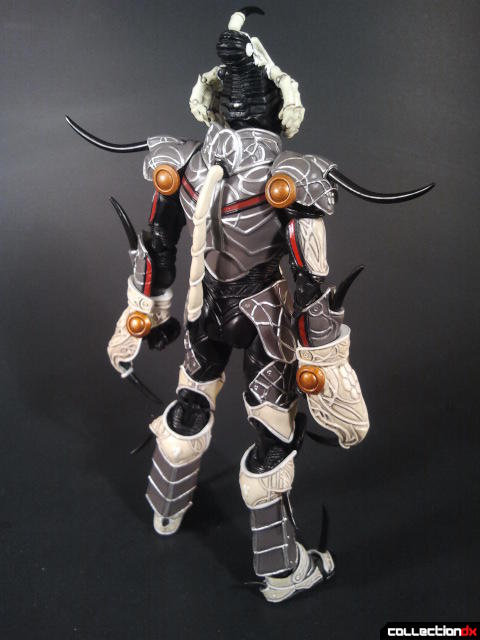 The head is incredibly ornate and the additional light wash on the bony parts of the helmet really brings out the extra detail of each joint. The five blood red eyes also glimmer menacingly under the light. 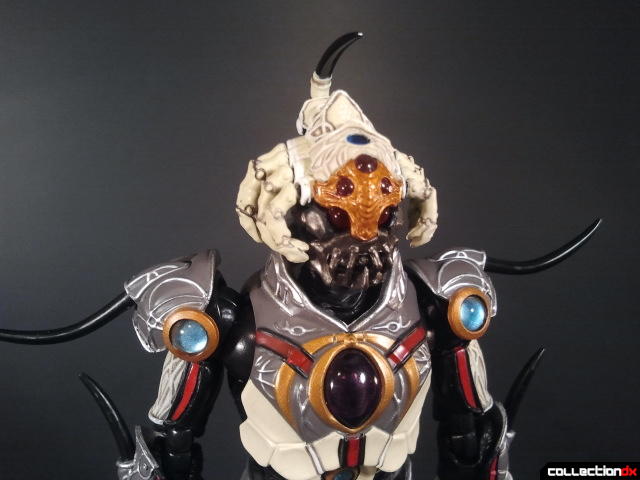 The front of the Scorpion is also covered with these beautiful clear gems that add an extra layer of depth to the figure. That combined with the fine silver trim covering the rest of its body truly makes this a toy that is a marvel to look at. 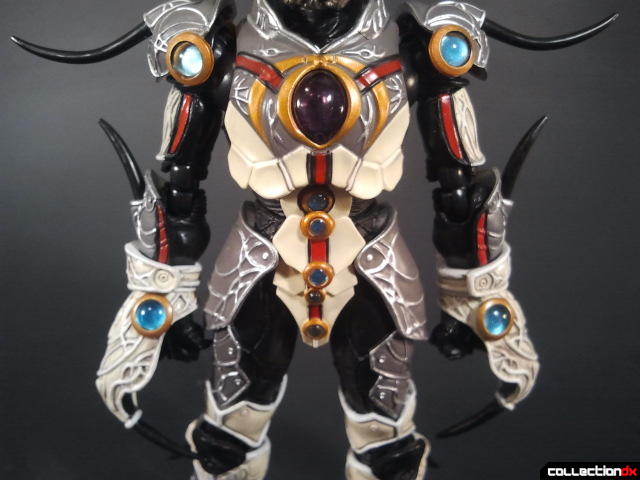 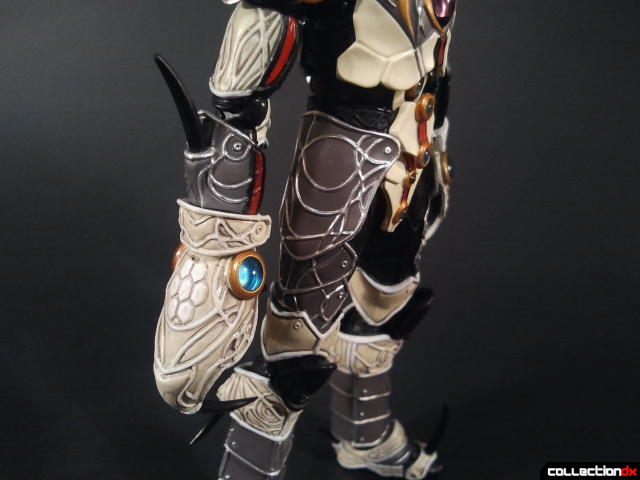 Unfortunately all of that sculpted detail does come at a price as it hinders the Scorpion Zodiarts' articulation slightly compared to other S.H. Figuarts. Although most of the basic movement is there, its knees do not bend nearly as deep as a less encumbered figure, and the pointed legs and armored shins prevent any extremely dynamic poses in the legs despite having the plastic Figuarts foot-joint. 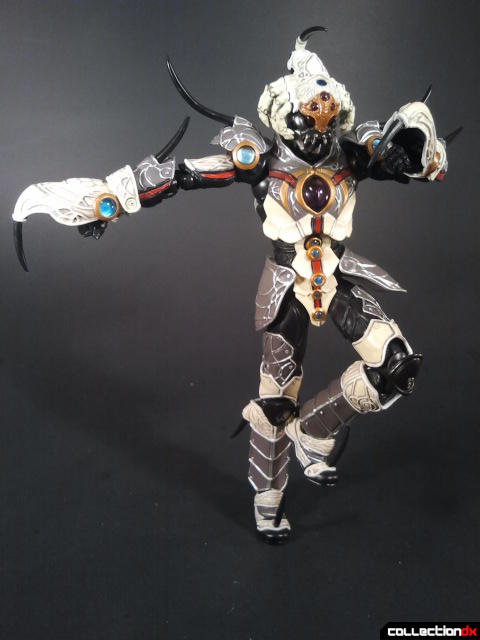 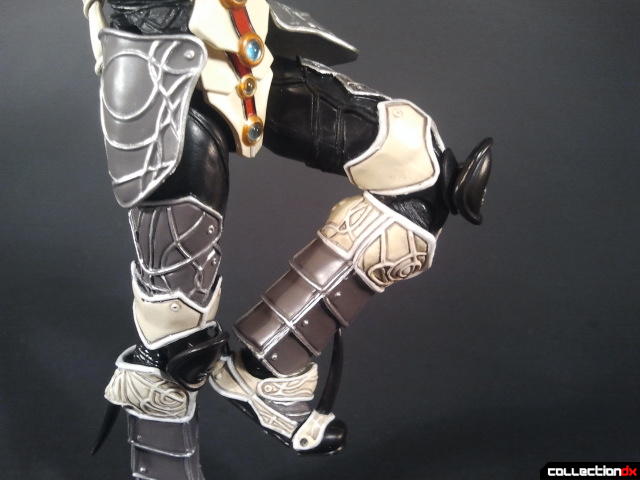 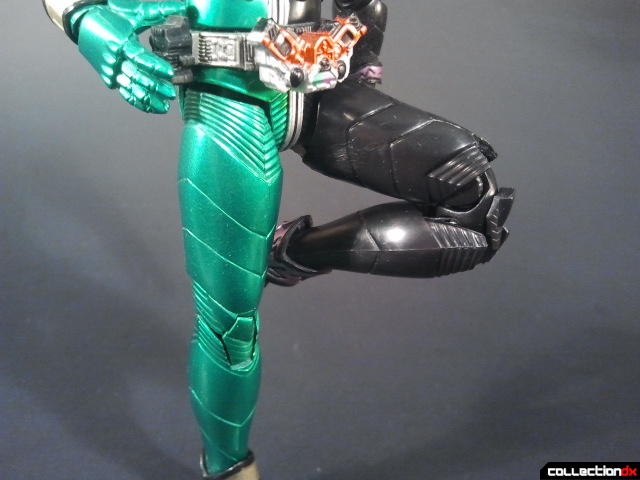 The shoulders are designed in a new way, using a clip that is on a stem attached to the shoulder pad. This allows a wider range of motion that does not constrain the shoulder pad to the arm as much as the previous clip-on piece did. 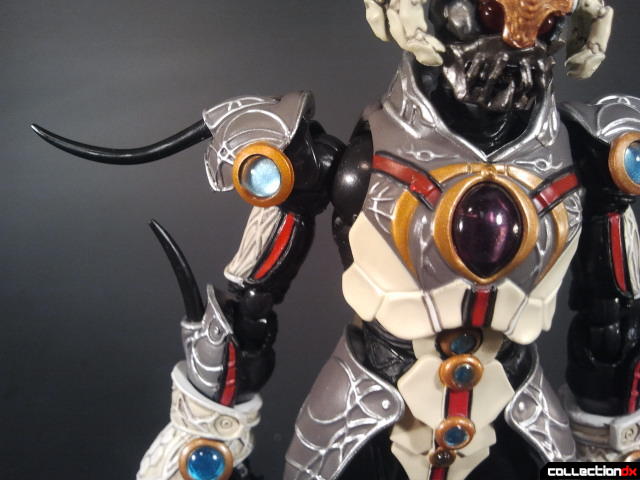 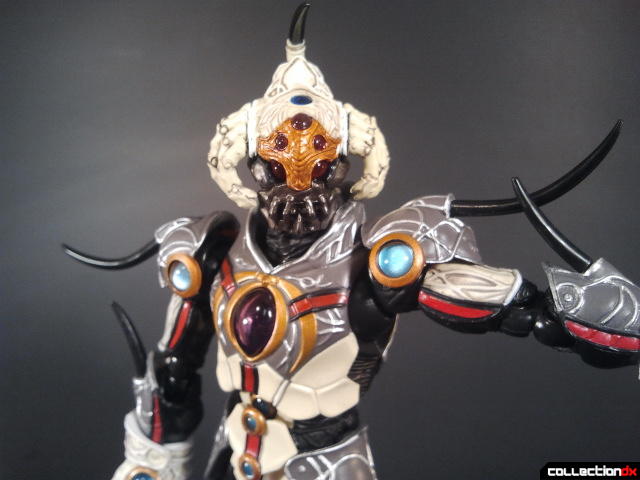 The Scorpion Zodiarts comes with several accessories. The first is the Horoscope's elaborate robe. The robe is large, made of plastic, and covers all of the gorgeous detail of the figure. Despite being a nice additional option for the toy, I do not bother with it as it makes the figure look bloated, plus it limits articulation drastically. 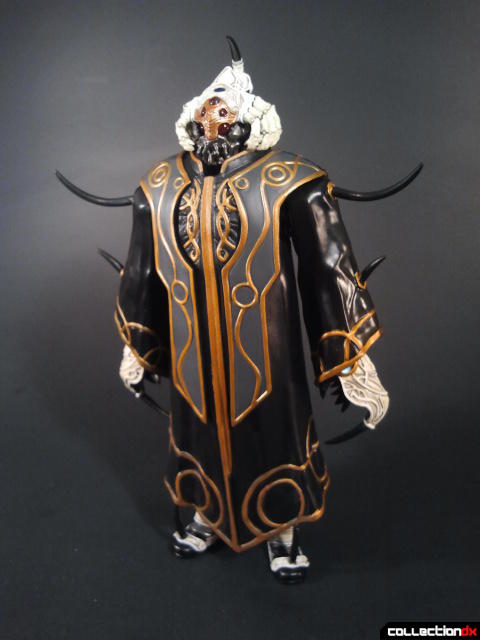 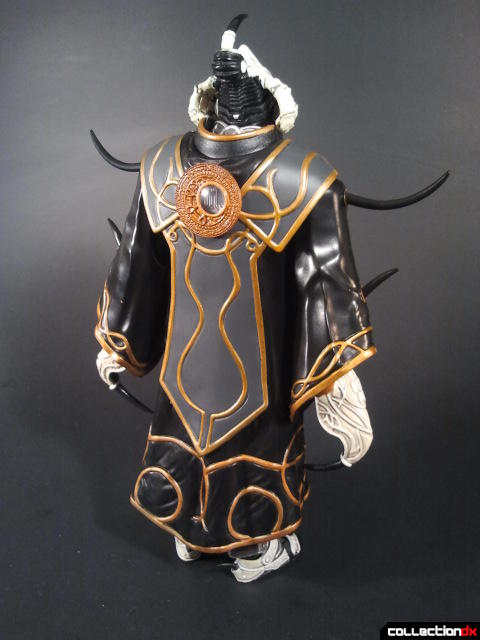 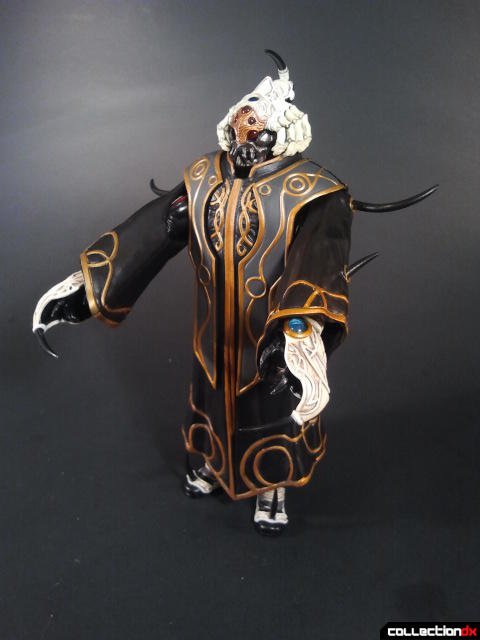 I do have to admit that the symbol on the back of the robe is intricately detailed to a near ludicrous degree. 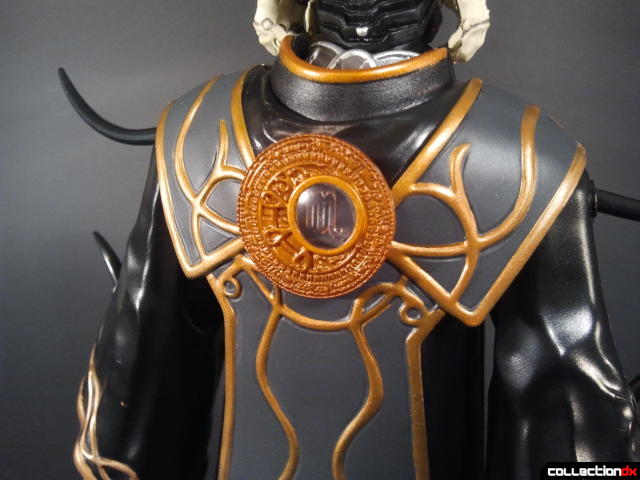 This figure comes with the standard hands that you expect: a pair of fists and some splayed open hands. In addition to that, however, it also comes with a pair of more wickedly splayed hands and also a specific holding hand. 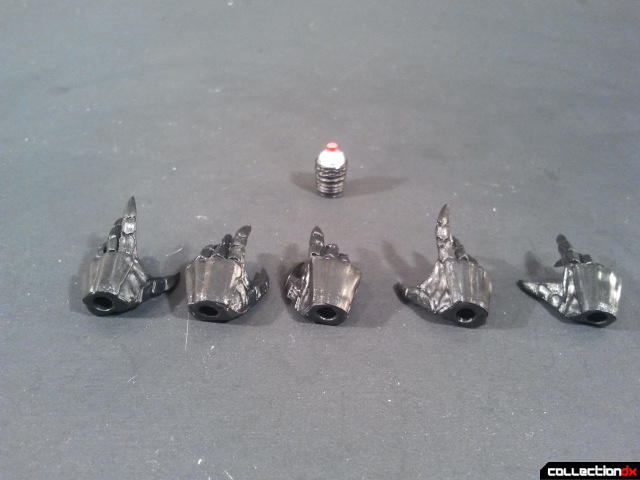 The more wildly splayed open hands I find are excellent for devious poses and gestures. 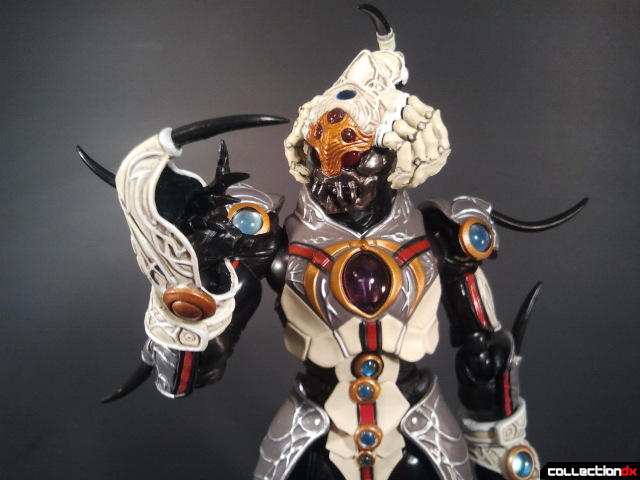 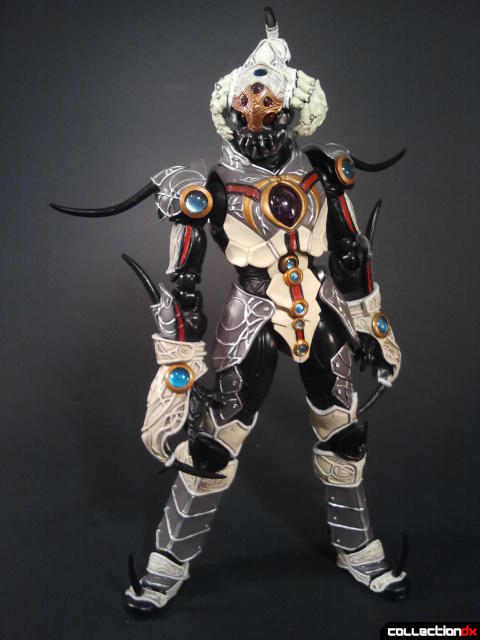 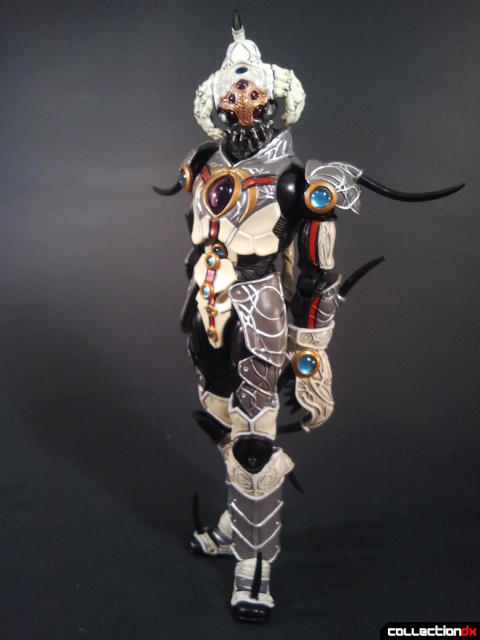 The other hand is used to hold the Zodiarts' final accessory: an Astroswitch used to turn people into Zodiarts. I have to say this is the one part of the set that I find really disappointing. Although the detail is all sculpted there, the switch has no painting on the black half of it. Sure it's really small, but I feel like Bandai could have done something with it. 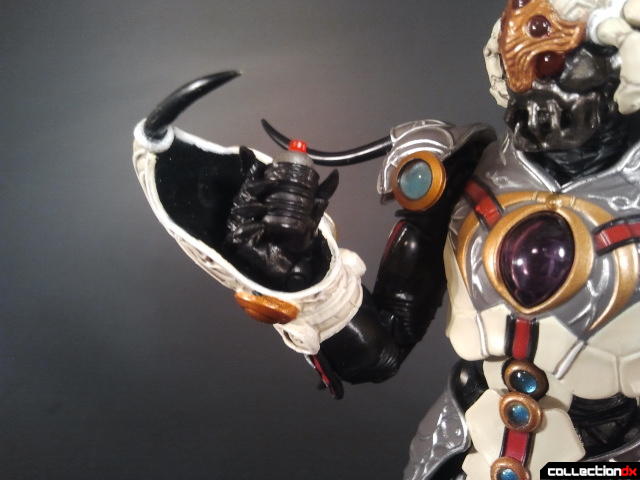 Regardless of that, it still makes a great prop for corrupting your other action figures 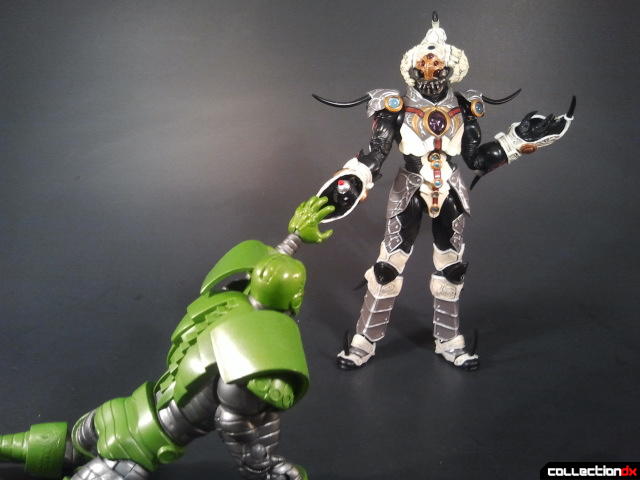 The Scorpion Zodiarts is an oddity of a figure release for the SH Figuarts line. It's a bad guy design that managed to sneak its way into a main line release, but seems to have managed to retain the Web Exclusive level of premium detail and paint. Even though its articulation is a little bit hindered by the actual sculpt, this is still a fantastic figure based on design alone. If you like super detailed figures or horrifying bug faces, the Scorpion Zodiarts is for you.

By the way, this is a girl. 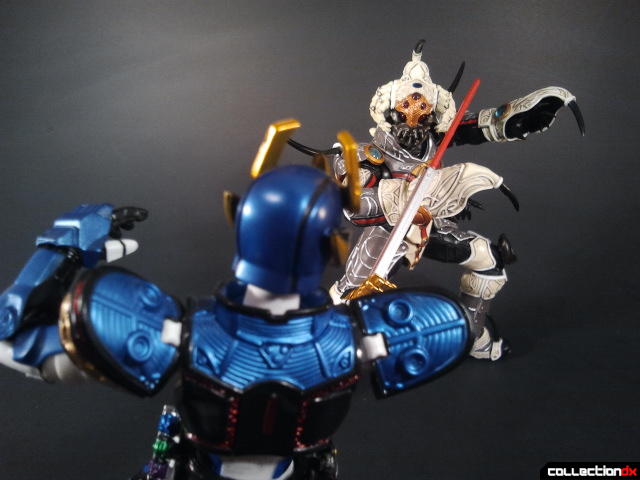 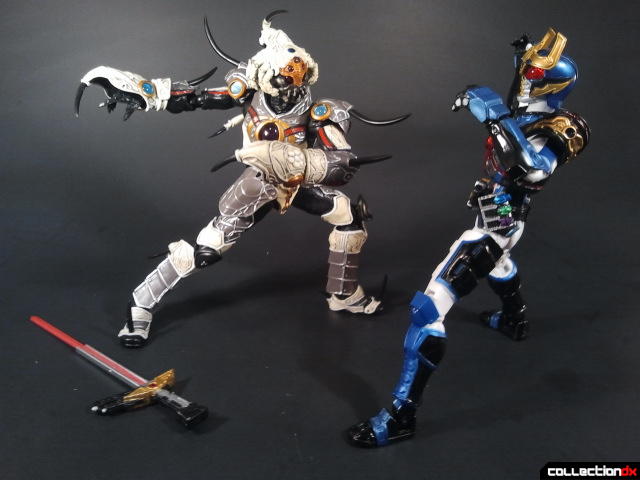 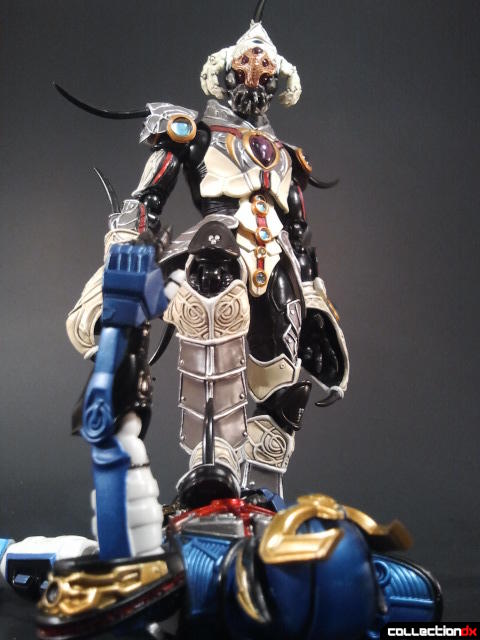 2 comments posted
Wow! What a face!

I love the design of the head with the scorpion legs
resembling hair and its 5 deep red eyes. Such a
great contrast between the monstrous mug and the
ornate armor and robe.

i never knew this figure existed. i saw the review, and i liked the low price, so i bought one. thanks for being an enabler, guys. awesome stuff.