Get your Tamashii Nations items at: Big Bad Toy Store

Ultraman Agul is the rival and partner of Ultraman Gaia. By the end of the show, Gaia and Agul were working together to thwart an alien invasion, but things weren't always so great between them. In the beginning of the show, Gaia and Agul were constantly fighting because of philosophical differences. Gaia was protecting the Earth because he wanted to save all of humanity, while Agul was only interested in saving the Earth and could not care less about its human inhabitants. This made Ultraman Agul more of an antihero because he would fight to protect the Earth, but he didn't mind civilian casualties. Don't worry, folks. He got over it. 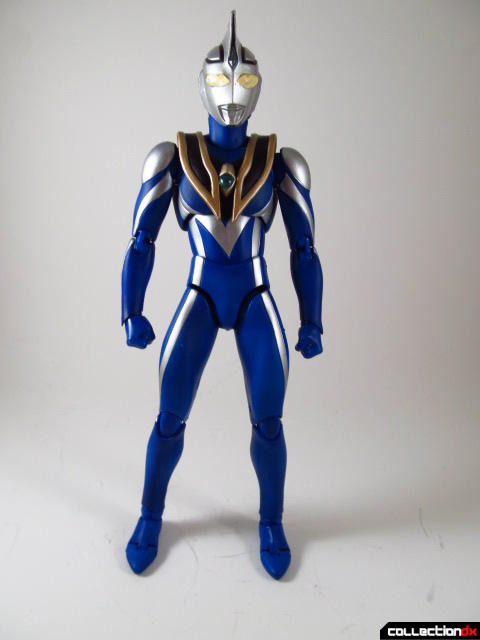 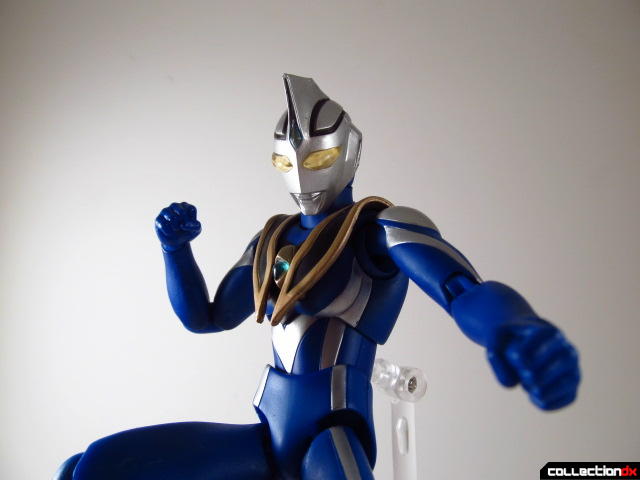 Let's take a gander at this toy. First off, I'd like to say that these colors are awesome. Every detail and paint application looks great. After looking at this guy for a while, I couldn't really find any faults in the design. The silver looks really great on top of the blue, especially since the blue is a rich, deep hue that really makes him stand out. Since this is Agul in his powered up second form, he has the black accents and things that make this design stand out even more! 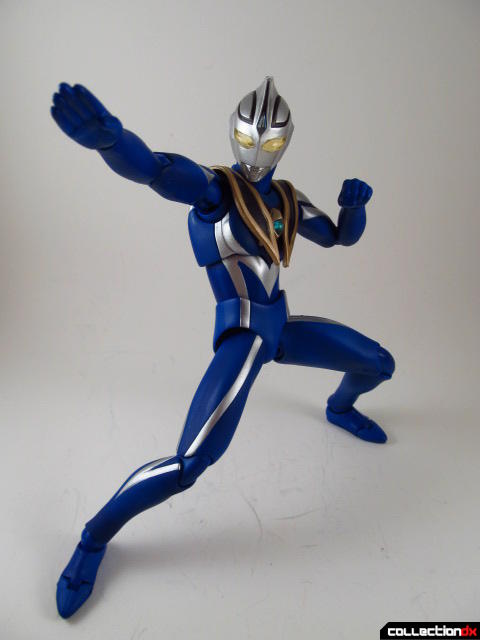 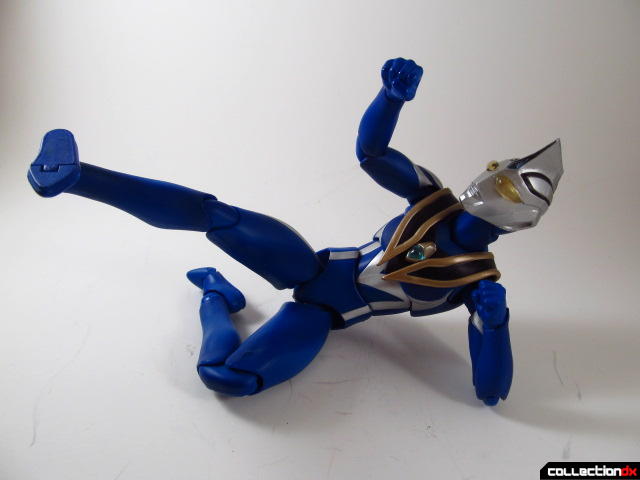 Articulation is standard Ultra Act fair. He has a ball-jointed neck, ball-jointed chest and waist, double swivels for the shoulders, double elbow and knee joints, ball-jointed swiveling wrists, ball-jointed hips on a swivel, thigh swivels, toe action, and an amazing ankle joint. Those ankle joints are one of the reasons I love Ultra Acts. You can move the foot in any direction without wearing anything down like a ball joint. I always have to add some fingernail polish or super glue to ball jointed feet after a while to keep them holding poses, but you won't have to with these. They're just SO MUCH FUN to play with! 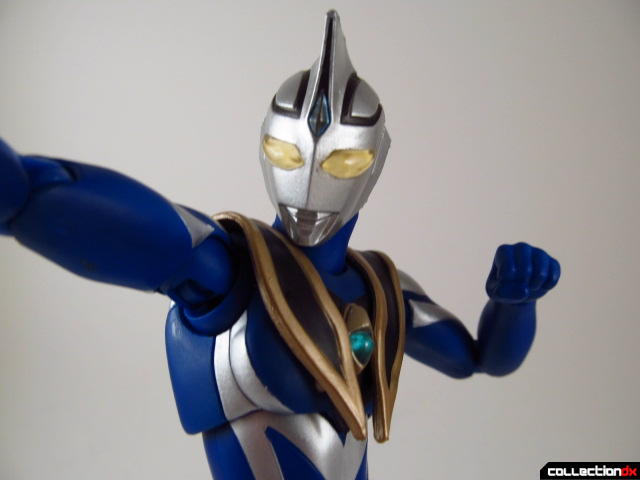 My only gripe with the articulation is the lack of a bicep swivel. There's an extra swivel in the shoulder to help out, but you don't get the range of motion like you would with actual bicep articulation. It's not a huge deal, though, because you can still put Agul into pretty much any pose you'd like. 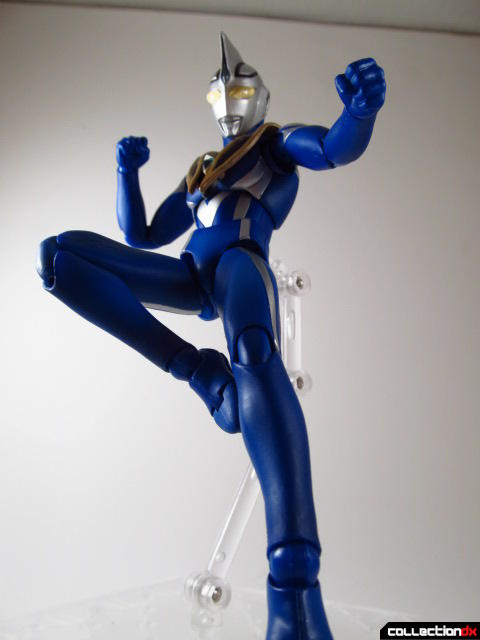 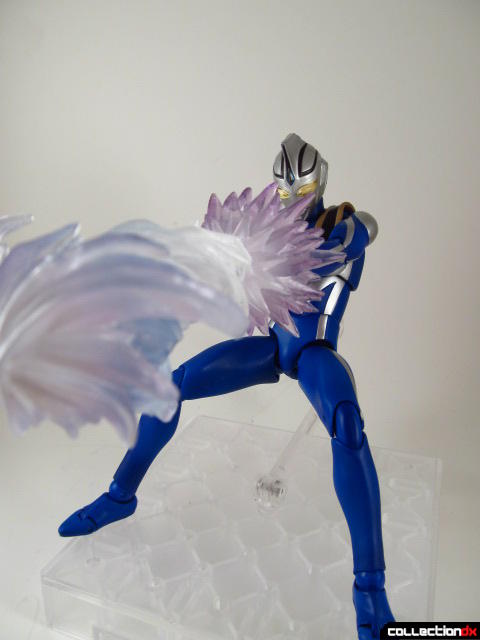 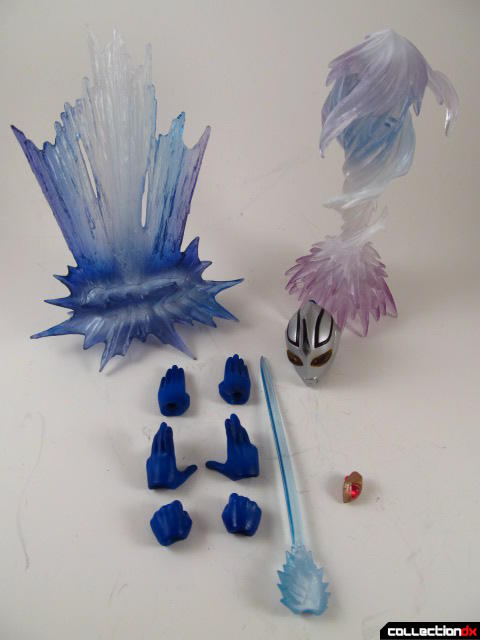 Agul also comes with a bunch of accessories! He comes with three pairs of hands including fists, splayed hands, and karate-chop-Ultraman hands. He comes with two heads like the Ultraman Gaia release, where one is show accurate and the other has a light piping feature. He also has both a blue and red gem for his timer, and three effect parts. The first effect part is his Agul Blade, and it's exactly what it sounds like. It's a laser sword that pegs into one of his wrists. I guess you could count this as an extra hand, but I'd rather not because it could get confusing. He also comes with a Quantam Stream just like Gaia, except his is blue. The last effect part is his Photon Screw. The Photon Screw is really awesome. It's a giant swirling blast that pegs onto both of his wrists. He needs a stand in order to hold it, but he looks amazing with it attached! 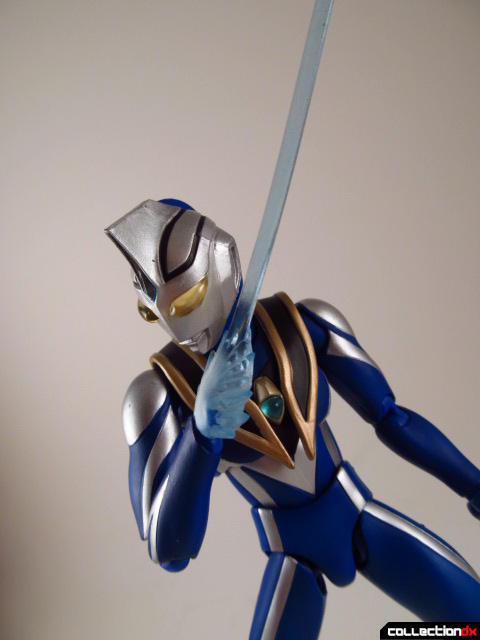 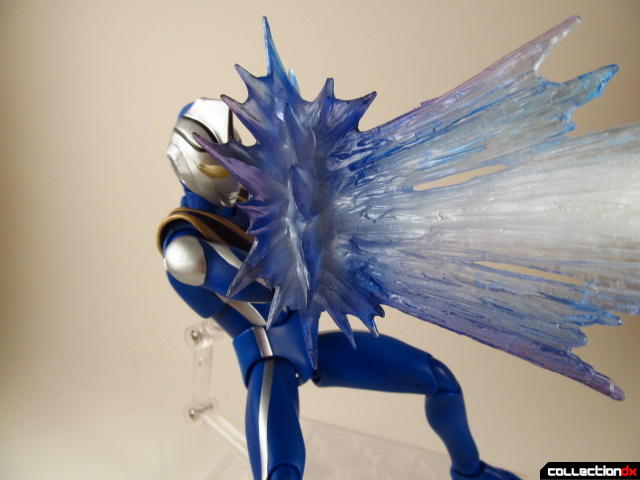 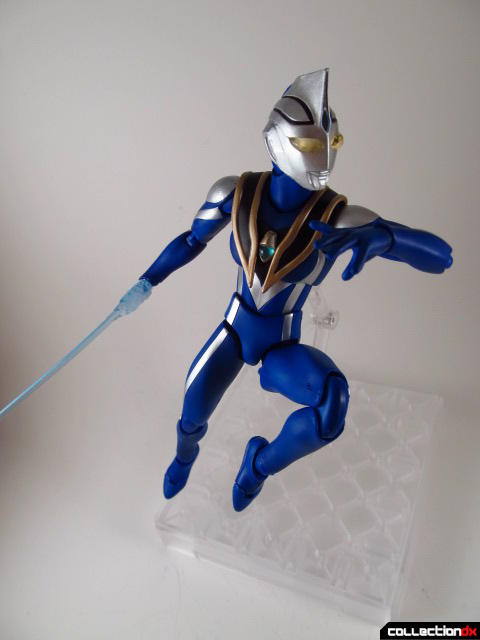 Basically, Ultraman Agul [V2] is a great figure, and I saw no major flaws in the execution. I highly recommend picking this guy up if you need someone to go with your Ultraman Gaia. Heck, you could just pick him up by himself! This is a great toy!

great review. im still on the fence about buying even my first ultraman figure. from what i keep reading, these are hollow-feeling figures. i love thhe accessories and your pics.

Thank you very much! It's true they don't feel as dense as S.H. Figuarts, but I've never had a problem with their build quality. It may be because of their size. They are right around 6 inches, where Figuarts are around 5 and a half.

I say, if you're still on the fence, wait until one of them is on sale so you can pick it up with little to no wallet pain. Use that as a basis for how they feel.

I picked up a Kamen Rider FigArts and an UltraAct on the same day and have to say I definitely prefer the size, proportions, sculpt and poseability of the UltraAct figure. The Kamen Rider ones are really nice and of very high quality, just smaller and in my opinion, not quite as nice. HLJ always seems to have one or two of these on clearance. Try them out, you will not be disappointed.