Kaizoku Sentai Gokaiger is officially one of my favorite Super Sentai shows of all time. It focuses on a group of young space pirates who have come to Earth in search for the Greatest Treasure in the Universe. Their plans are put on hold, however, when the evil Zangyak Empire attacks Earth, and it is up to them to save our planet using the powers of the previous 34 Sentai teams. 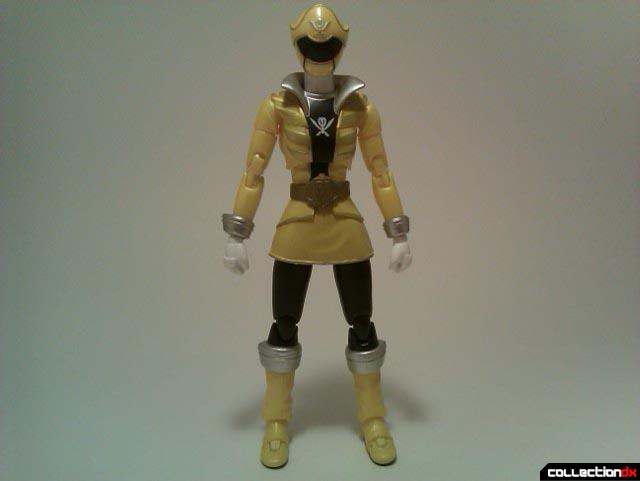 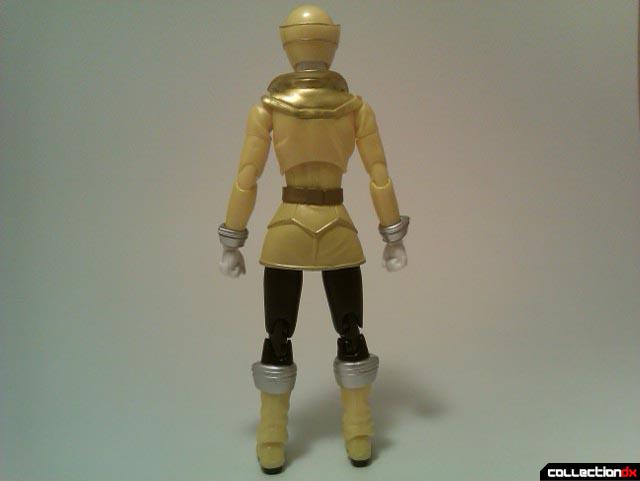 Luka Millfy is one of the greedier members of Captain Marvelous’s pirate crew. Of course, that never stops her from transforming into Gokai Yellow whenever someone is in trouble. She is obsessed with treasure, which often creates drama on the show. Her character struck me from the beginning, and I knew that I had to have her S.H. Figuart when it was released. That being said, I am really glad I got this piece, and here’s why. 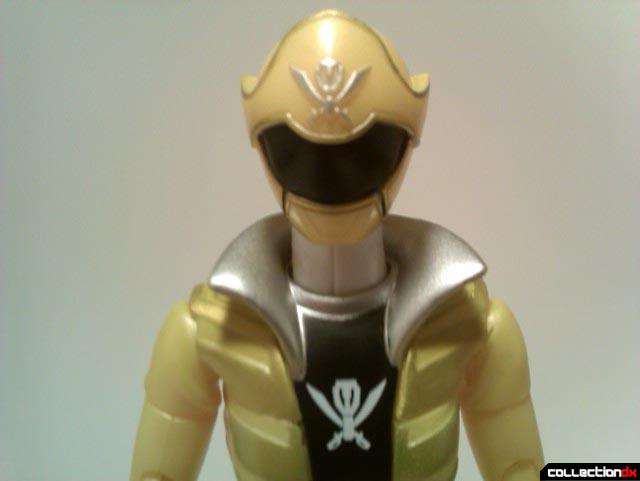 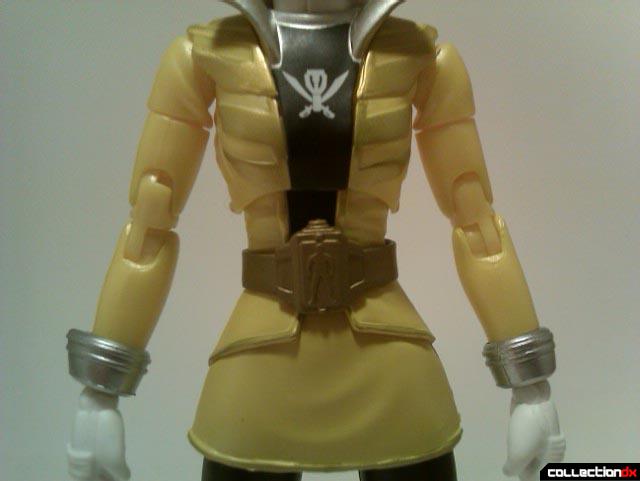 The sculpting on Gokai Yellow is superb. When I first started looking at press images when she was announced, I thought they were just going to be modifying the male Gokaiger body by adding a skirt and a female torso. I was completely wrong, because this is an entirely different mold. Everything is shrunken down to give her a more petite appearance. If there’s one nit-pick that I have about the figure’s looks, it’s that the yellow plastic looks a little dry and cheap, despite the fact that it isn’t. The plastic still feels wonderful sturdy. That’s just a side effect of having yellow plastic. The paint apps and detail are still masterfully created, so the figure looks great! 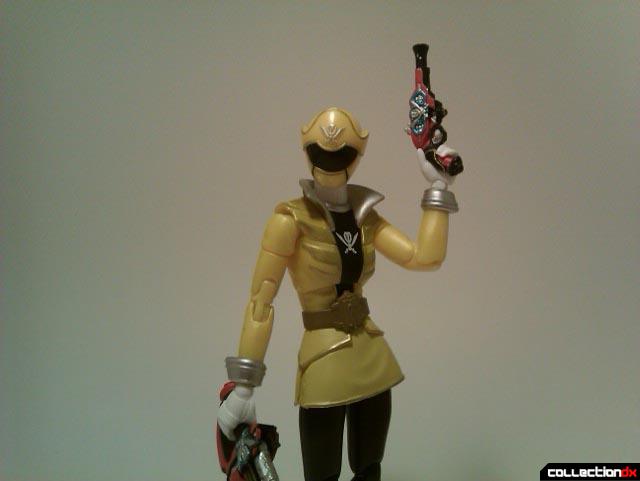 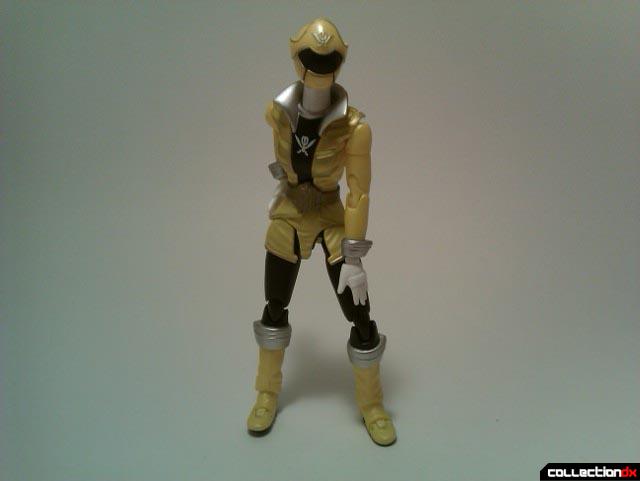 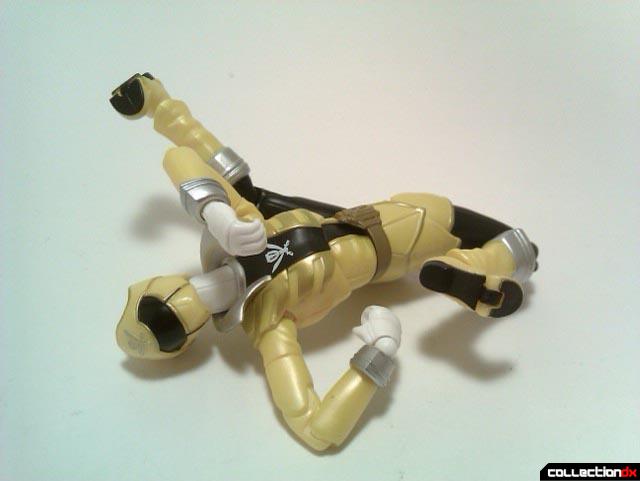 Gokai Yellow has all the articulation one would expect a Figuart to have. She has a ball-jointed head and neck, double ball-jointed shoulders, double-jointed elbows and knees, double swiveling wrists, a ball-jointed chest and waist, hinged ball-jointed hips, ball-jointed ankles, and toe articulation. All her joints feel tight, and nothing is hindered in any way. There is a thin layer of plastic over the shoulders to give the appearance that it is a spandex suit, but like I said in the sentence prior, the shoulders aren’t hindered. I also really like how they did the skirt. It comes with two types that you can easily pop onto her. There is one that comes in two pieces that you can use for calm poses, and it looks like an actual skirt. There is also one that comes in three pieces that has the thigh pieces separated, so you can pull off crazy jumping and kicking poses. 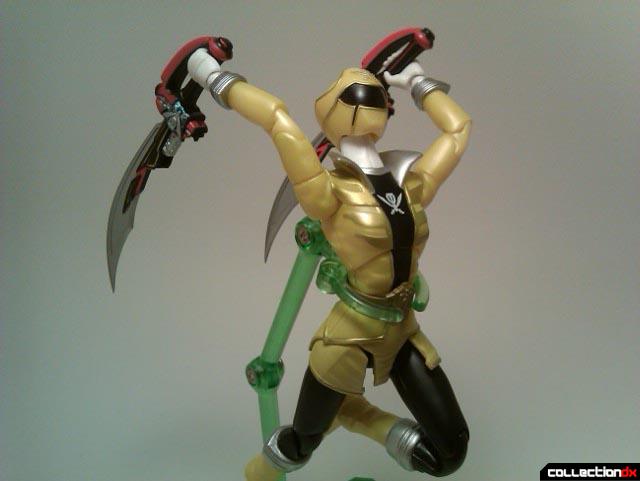 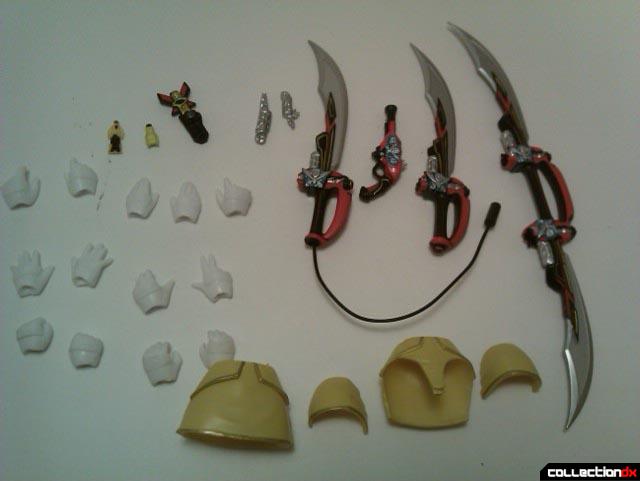 I was blown away at the amount of accessories that Gokai Yellow comes with. She comes with six and a half sets of hands (fists, gun-holding hands, sword-holding hands, calm hands, semi-splayed hands, hands for holding her Mobirates and Ranger Keys, and one hand for holding her saber wire). Along with the two skirts that I previously mentioned, she comes with the Mobirates, two Ranger Keys, a Gokai Gun, Gokai Saber, spare Gokai Cylinders, a Gokai Saber with a wire attached, and a double-bladed Gokai Saber. I was not expecting the Gokai Saber with the wire. This is to emulate the show, when she uses wires attached to her sabers to rip through enemies a la Kratos from God of War. The wire is actually a wire, so you can bend it as you please and it will hold its shape rather nicely. 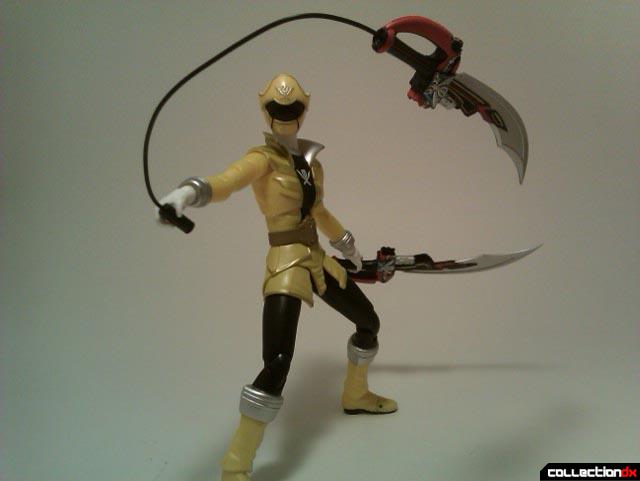 Normally, if you would want her to dual wield Gokai Sabers, you’d have to purchase another Gokaiger Figuart, but that’s not necessarily the case here. Since she basically comes with four Sabers, you can do a whole lot of poses from the show. If you want her to wield two normal Sabers, however, then you will have to purchase one of the other Figuarts. It’s a vicious cycle. 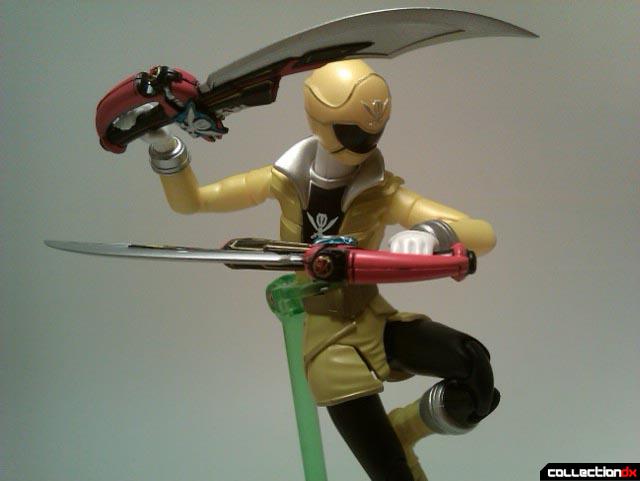 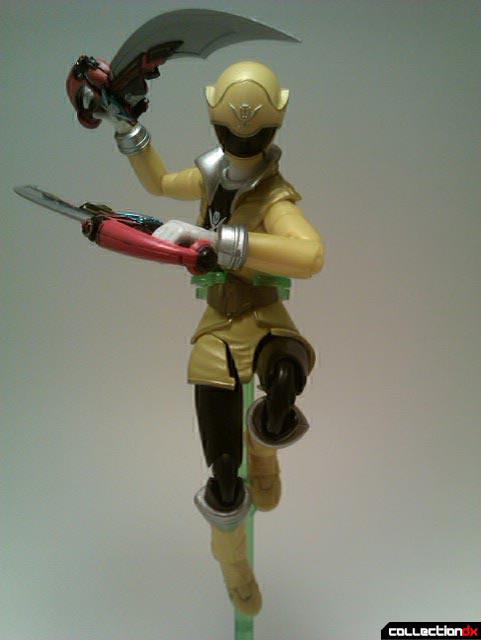 Another huge accessory that Gokai Yellow comes with is the Gokai Darin. The Darin is the wheel and chair that she uses to control her portion of Gokai-Oh. On most of the other Gokaiger releases, the Darin is a special “First Release” bonus that you can only get by ordering the first ones available, but that isn’t the case here. The Darin comes packaged inside the box and has its own bubble behind her other accessories. The paint apps and detail are great, and she looks great when driving it. 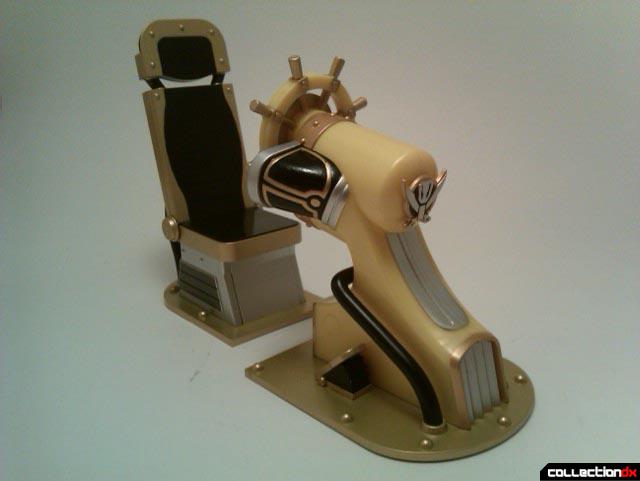 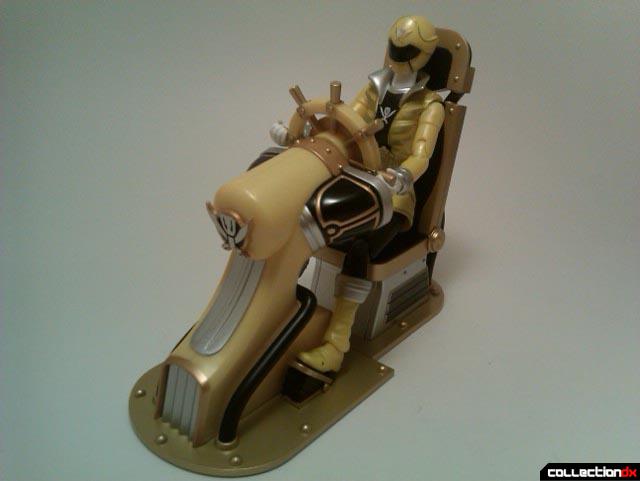 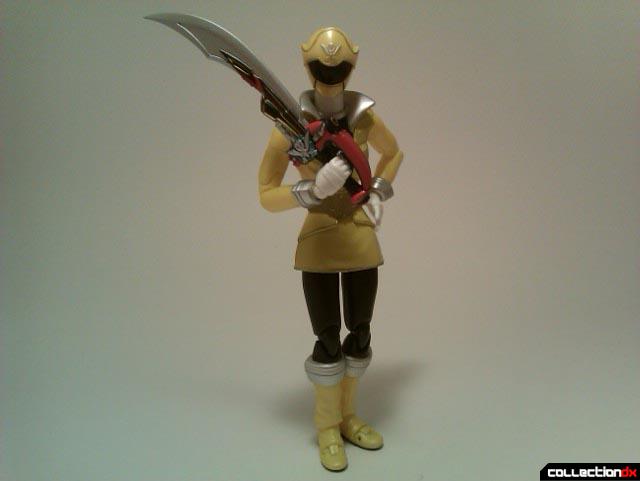 Overall, this figure is magnificent, but there is one huge, glaring problem: It is a Tamashii Web Exclusive. That means you can only obtain it by using a middle-man service. This creates wallet PAIN. Due to her exclusivity, her price is around 6,000 yen. Plus, you have to pay for shipping and usually middle-man fees, so choosing to bite the bullet and order her is not something you can do lightly. If you have the extra money and are a fan of her character, you will find a figure that is worth her weight in change. GOKAI CHANGE! 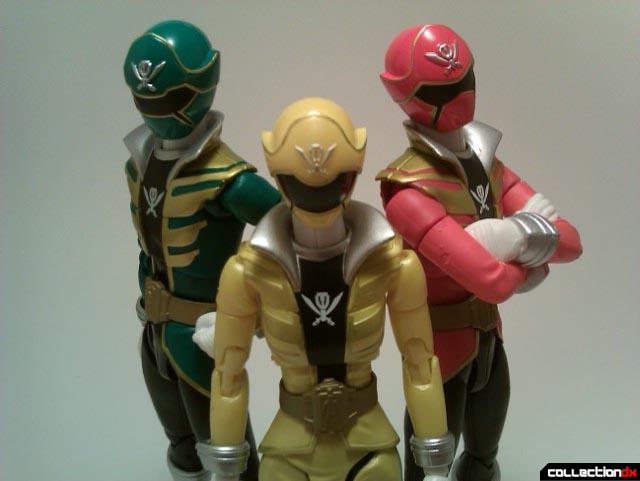 6 comments posted
There seems to be a problem

There seems to be a problem with your photos, dear lad.

Addendum: And there they are. :3

I just looked at the series tab, and it is mislabeled as Goseiger, when it should be Gokaiger

Edit: Yay thanks for fixing it!

Both errors fixed, thanks!

Great Review!
I really wish that there would be enough demand for the female Super Sentai characters, so that Bandai would do a proper run of them , so it wouldn't be so expensive to get a full Super Sentai team.

Thank you! I wholeheartedly agree. However, this is the first time where I felt compelled to have the entire team. With the Shinkengers, I really just wanted Genta. This is the first time in ages where every single member of the team feels like a justifiable purchase. You know, of the 2 shows they've done this for.... :<

The pics are all thumbnails for me,...running on Chrome. :(