Medarots, more commonly known in the west by its less goofy name Medabots, was one of the many things coming out of Japan that was part of the battling pet craze. Only in this case, game makers at Natsume and Imagineer attempted to combine the wholesome activity of beetle fighting with customizable robots. Starting off as a humble Game Boy game, the franchise would spawn several manga and anime series.

I only caught bits and pieces of the TV show on one of those interchangeable family channels. In fact, the first episode I saw was one of the later episode first where our heroes had to battle a giant Medarot using an equally giant version of the main character, Metabee. This display of total Japanese charm warmed my budding weeaboo heart.

Bandai's D-arts line is an offshoot of their popular SH Figuarts line. It is meant to focus on video game characters rather than anime and manga properties. Medarots certainly fits that category.

The figure was provided by HobbyLink Japan. 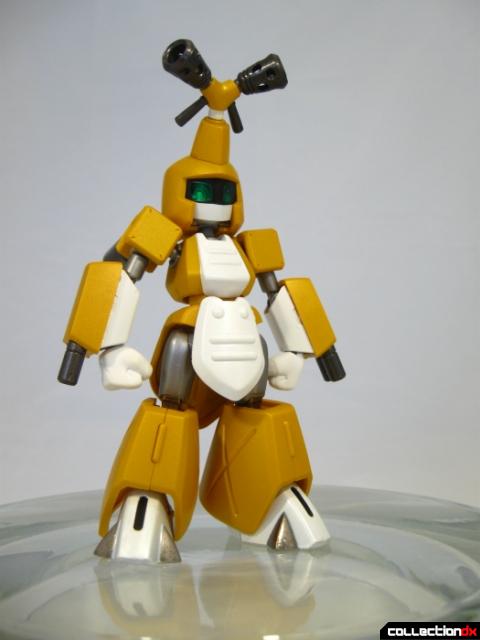 The main Medarot in the series is the metal beetle, Metabee. He is like your typical shonen series protagonist in that he's a total jerk to everyone. In Japan, he was even voiced by the Naruto. His bulky armored form and prominent head things are meant to invoke the image of a kabuto beetle. Due to his heritage, Metabee also loves watermelons. The figure is roughly five inches tall and is surprising heavy due to strategically placed diecast metal parts. The golden areas of his body are done in a sparkling gold colored plastic. The white areas are all painted on with a matte finish. 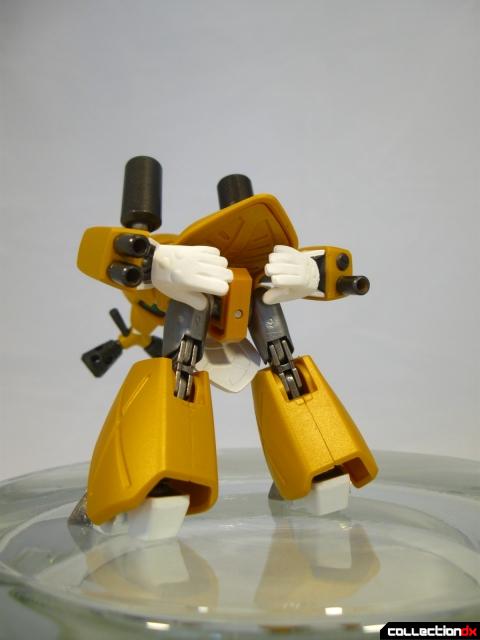 With this Medamooning, we can see some of the intricacies of the figure. Part of the diecast found in this toy are its knee joints. Both the front and rear skirt armor plates are hinged for extra mobility. Also in addition to normal fists, Metabee comes with two open hands. Sadly all the hands are cast in a chalky looking white plastic and do not plug in and off the double ball-joined wrists too smoothly. It's a minor quibble. 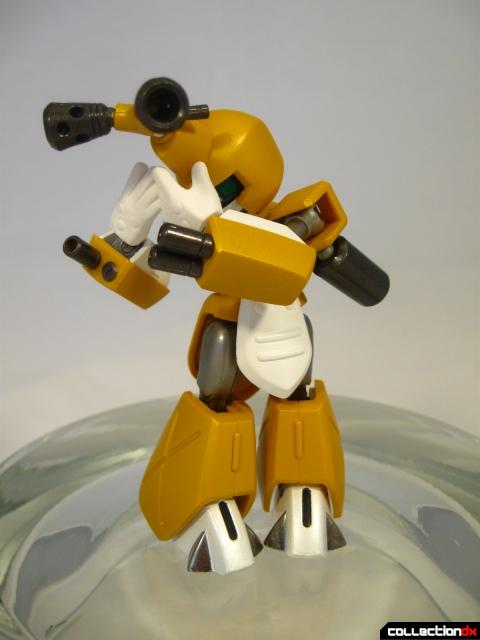 Metabee is loaded with articulation which allows you to really make him emote. Here he is showing embarrassment for the previous photo. 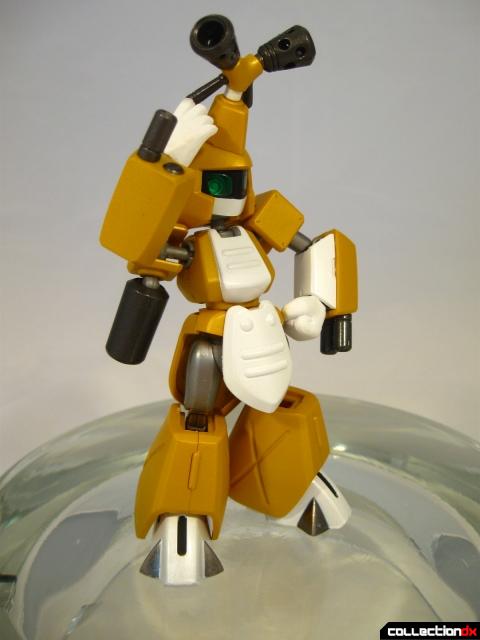 Fists are a robot's romance. 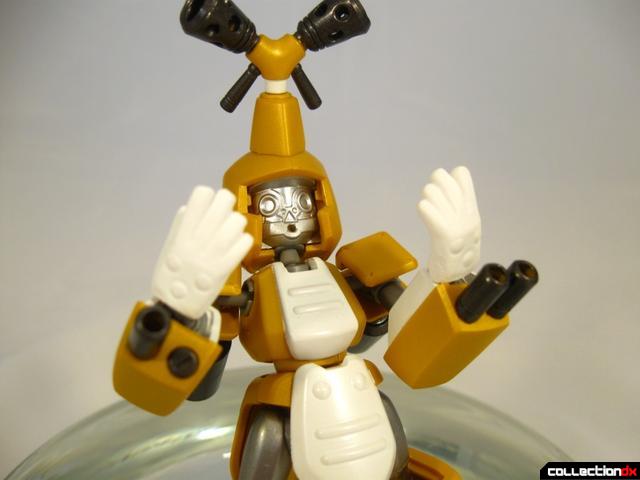 Like the D-Arts Rockman X, Metabee features a face swap gimmick. As a nod to the customizable inner frame as seen in the series and toys, Metabee has a detailed mechanical visage underneath his faceplate. Two of the faces have clear eyes to reveal this inner detail. Simply pull a faceplate off at the chin to remove it. 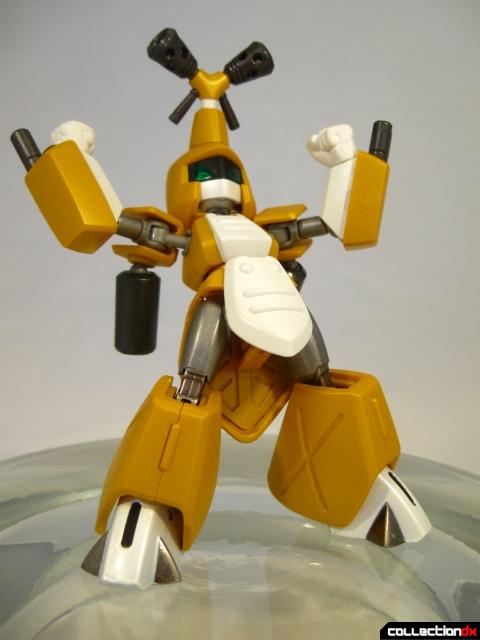 With the neutral face out of the way, you can now employ Metabee's angry face for some Medarage. 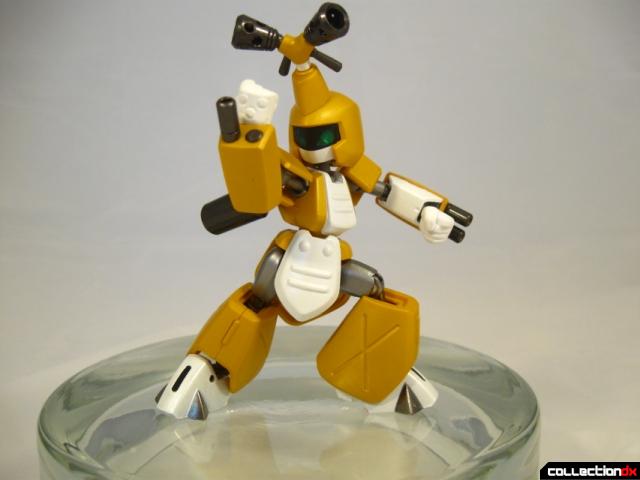 Like any good Bandai toy, Metabee has numerous points of articulation. From ball-jointed hips and shoulders to hinged pauldrons, it's all there. Even the canisters on his pauldrons have their own universal joints to keep them from being a bother. 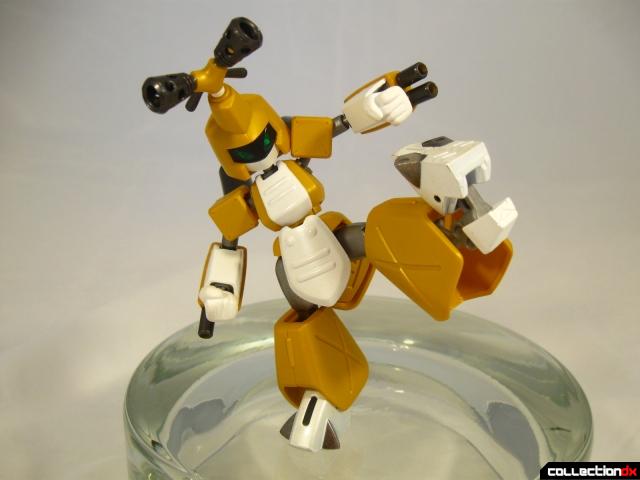 Not only are Metabee's delicious diecast feet attached via ball-joints, but the ankles have an additional double hinge to work in conjunction with the hinged toes for even more articulation. 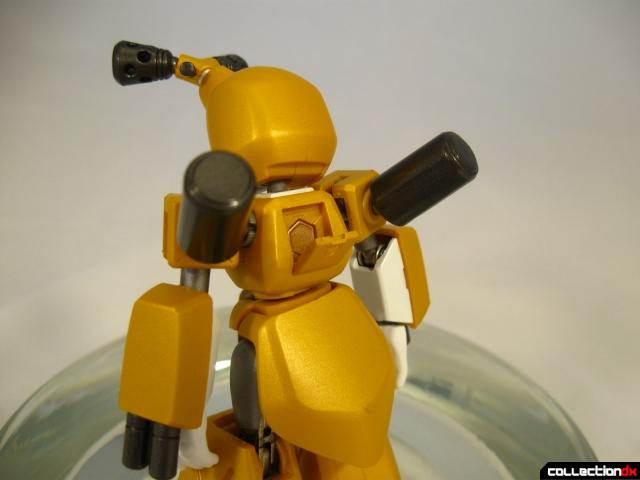 Because this is a Japanese toy, it comes with an easily lost tiny Kabuto medal. Just open up a panel on his back, stick it in, and never open the back for fear of loosing the itty-bitty thing in the carpet. 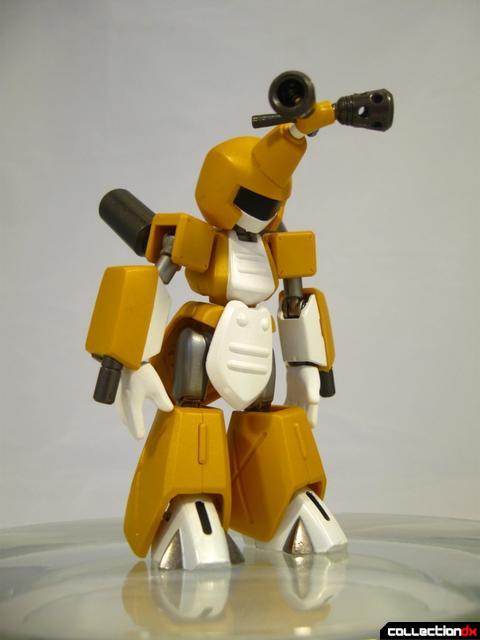 Without his Medarot robot medal, Metabee is nothing but a lifeless husk that serves as a cog in the great machine of modern society. To replicate his dead state, Bandai included a faceplate without eyes. 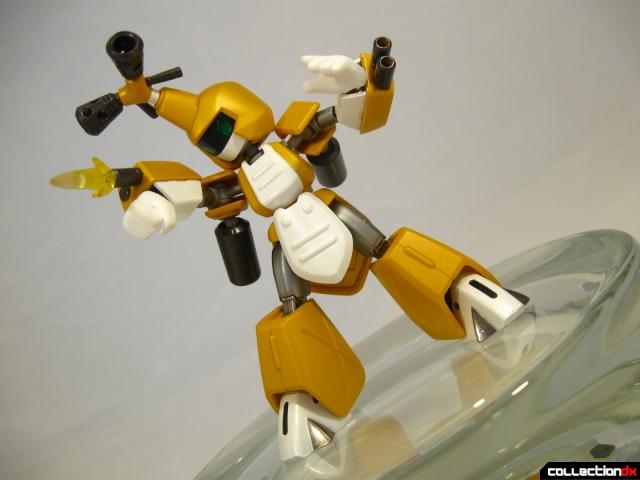 Since effect parts are the next big trend in toys, Metabee comes with a few clear yellow muzzle flashes for his arm cannons. One is this more detailed stalactite thing. 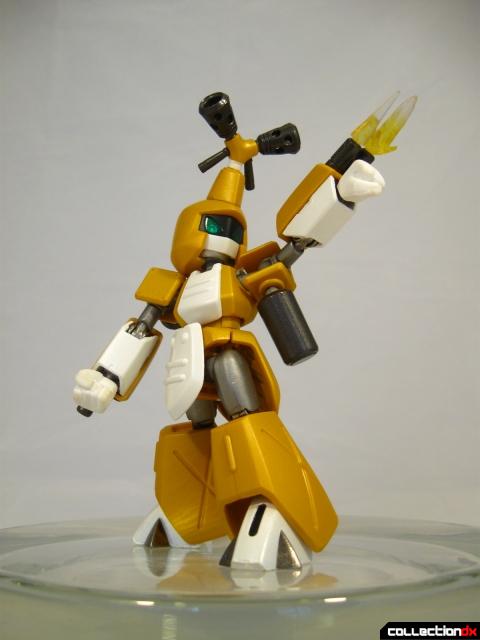 The other is a basic conefire. Both effect parts can be plugged into any of Metabee's arm cannons. 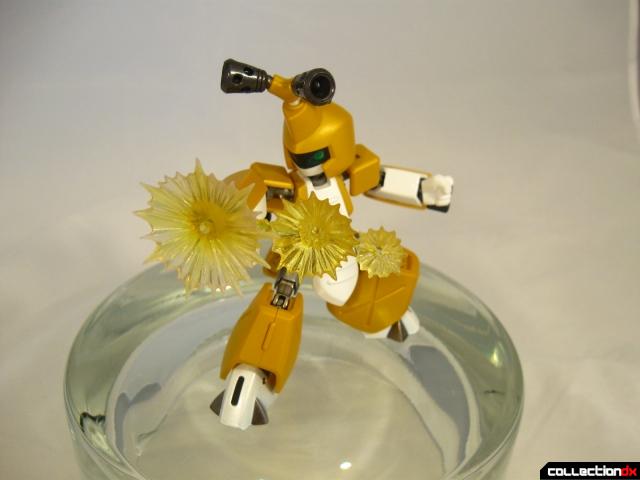 Taking a cue from D-Arts Rockman X, Metabee comes with a three part set of muzzle flashes for when you need him to lay down some covering fire. Either of the smaller flashes can be placed inside the largest clear dinner plate blast. 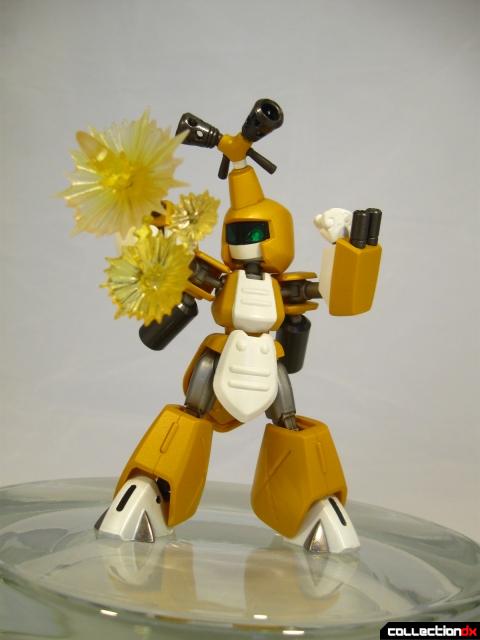 The two smaller flashes can be rotated around to create a more condensed pattern of gunfire. Metabee always goes full auto. 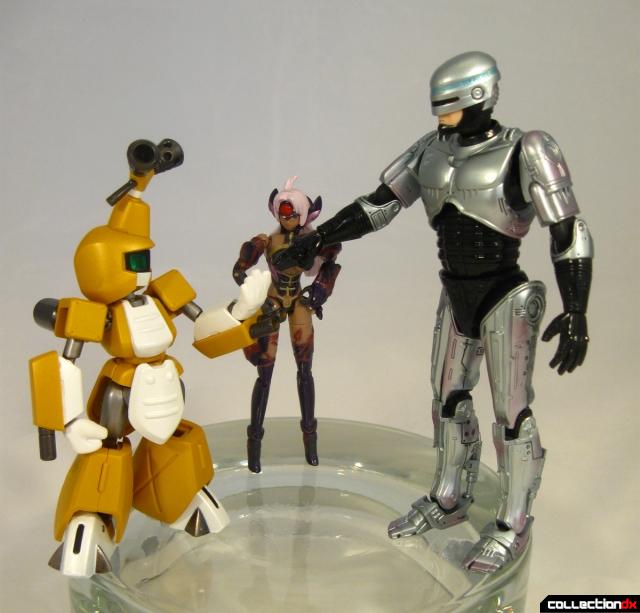 Previously on MURPHY AND THE BEE

"Listen Bee, I told you never to play bad cop with women!"

"She ain't no lady, Muph! She's a partial vessel for the reincarnation of the mother of God! Trust me on this."

Overall D-Arts Metabee is a solid and straightforward figure who does just about everything you would want him to do. My only nitpicks are it could have come with a few more faceplate pieces with even more expressions and that it lacks a similar missile effect part for his head thingies as seen in the Kotobukiya kit. Neither are a real deal breaker for me personally. Metabee is a jerky, chunky little beetle inspired robot and that's what Japan has always done well.

So get a Metabee at HobbyLink Japan

Why are those ankles so freakishly' pose-able??? Is something supposed to slip in there from another set? But the bits of die-cast would be quite satisfying, along with the great articulation.
I agree- effect accessory pieces are becoming the new thing for toys. But I would remind people that when they tried to make spring-powered effects- which in theory sounds great- you got things like water and ice blasts which never looked as good as they could. Still, love the effort here.

I considered getting some Medabots sets, but I could never quite bring myself to do it when presented with the opportunity. Like you, I didn't see much of the show even though I was aware of it; perhaps it was because I didn't want to commit to another catch 'em all/collect 'em all critter series. I liked the Metabee set where all the armor could come off to reveal the inner die-cast metal skeleton, but I heard it didn't have that great posing and the joints tended to wear out fast.

How do the limbs attach? One of the rewards of battle was receiving one of the opponents body parts (as I've recently learned). Is there any sign that they would be easily interchangeable with the upcoming Rokusho?

Edit: Also, do any of the muzzle flashes fit into the launchers on his head?

This figure looks pretty great, but then the original Tinpet skeleton model kits were great too. I sort of wish this one had a full skeleton. It looks like the medal in his back is just plain orange plastic, like the Kotobukiya kit?

Do you know how the scale compares to the old model kits and to the Koyobukiya kit? It would be nice if they could trade parts, or especially if the newer items could use the diecast medals from the old kits.

This thing looks great; I know there is already a Rokusho on the market. Do you have that one too and if so do you think you might write a review for it? I'm glad to see some updated Medabots toys but I know Bandai will never give me the characters I want most: Phantom Renegade and Mr. Referee.