Laputa: Castle in the Sky is an animated movie released in 1986 written and directed by famed director Hayao Miyazaki. It was also the first film released by Studio Ghibli. The movie follows the adventures of a young girl named Sheeta and boy named Pazu as they search for the mysterious lost floating city of Laputa.

The robot soldier first appears in the film when Sheeta is captured by members of the military. They have a deactivated robot, which mysteriously fell from the sky, beginning the military's search to find Laputa. The robot later becomes re-activated and nearly destroys the entire military fortress in an effort to protect Sheeta. Later in the film after Sheeta and Pazu reach Laputa they meet a lone robot who takes care of the animals who live in the massive garden of the floating city. During the climax of the film many more robot soldiers appear.

Fine Molds is a well known model making company with a long history of making military aircraft and vehicles. They also have produced many kits from Star Wars. This kit is one of only a few anime kits that Fine Molds has released. The others are various planes from the Miyazaki/Ghibli film Porco Rosso.

The box is fairly large but thin and has some art and scenes from the film as well as pictures of the kit itself. 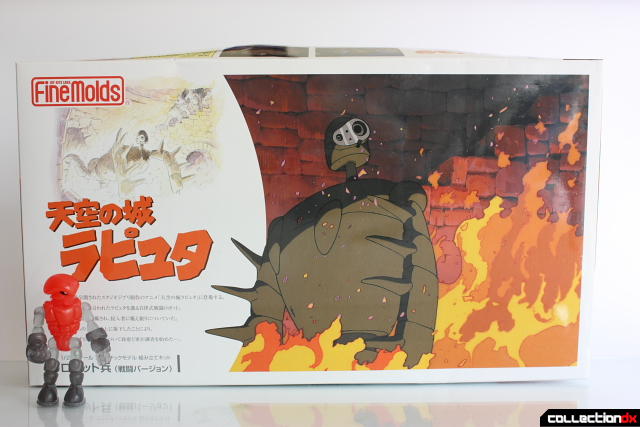 The kit is molded in mostly in light brown, with grey, clear, and clear red parts as well. There are also a small number of polycaps. An in scale figure of Pazu is included, molded in fleshtone hard plastic. Not the rubbery stuff that you may be used to seeing with other kits. The molding is very good and the parts have a very interesting texture, which reminds me of weathered stone. 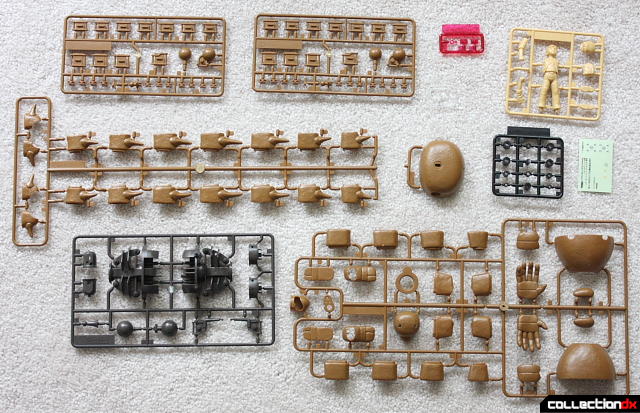 Construction is fairly straightforward and the manual is clear. However I did notice a couple of errors calling out for the wrong parts but it was easy enough to figure out the proper one. Parts for the arms and legs are laid out on the sprues very logically and in the order that you need them for assembly. Each one is different so be careful that you are using the right ones. Most of the figure also has an internal structure that you build the armor shell around. The sprue marks clean up very well. There are very few seam lines, which are either not visible, or hidden completely. The kit is entirely snap fit and no glue is necessary although I used some in a few locations. Two parts are included for the chest gem, one smoothed, and one with the emblem molded in. Two identical stickers are also included for the emblem. When completed the kit stands 7 inches tall. 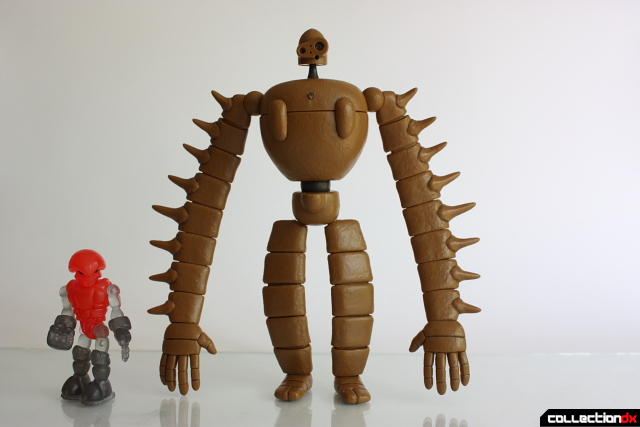 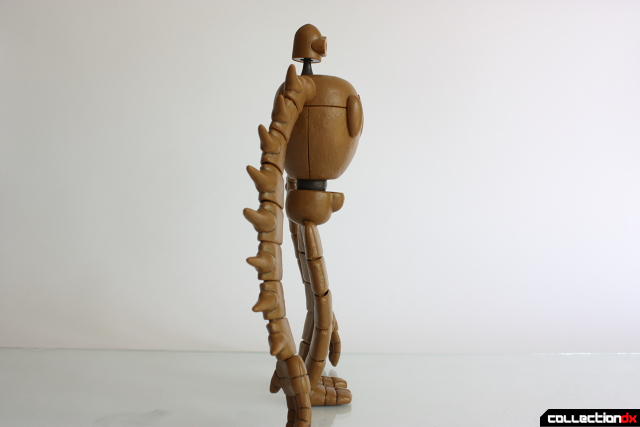 The figure has some articulation, but you have fairly limited options when posing it. The ankles and each segment of the legs move slightly, but there is only rotation at the hip. The waist can rotate and bend. The neck is ball jointed and a little on the loose side. The arms are the most articulated part of the kit. The shoulders have a very wide range of motion and the segmented arms have a surprising amount of movement. The hands can rotate at the wrist, but are quite loose. Because of the lack of leg articulation if you try to do much posing with the arms it is very difficult to get the model to stand without falling over. 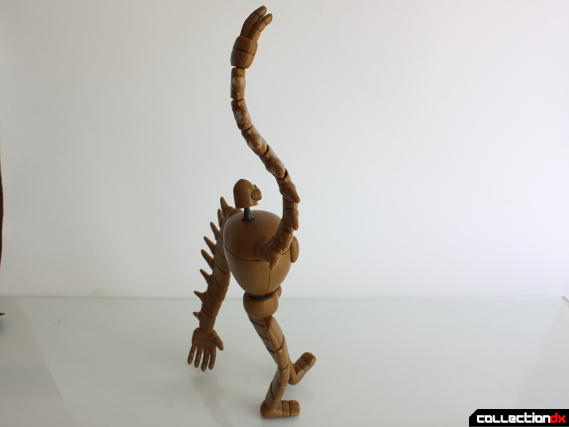 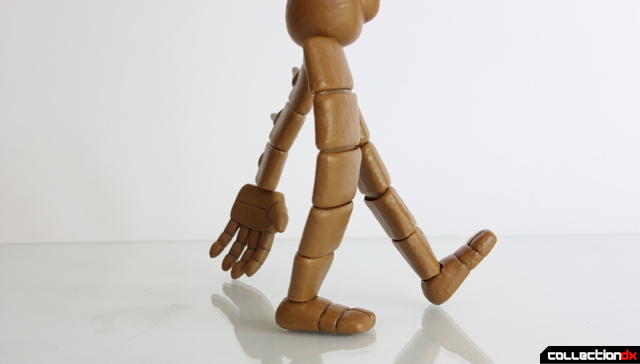 The waist can bend up and down and rotate. 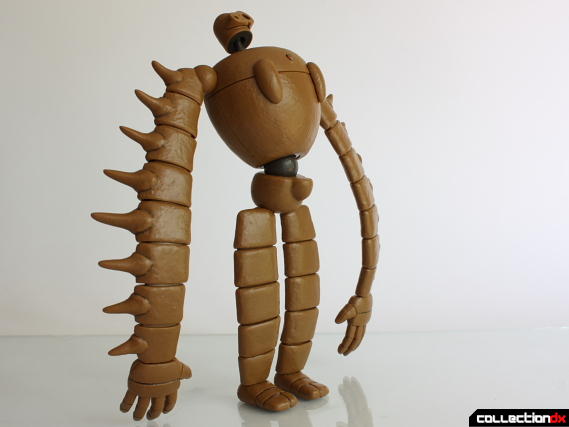 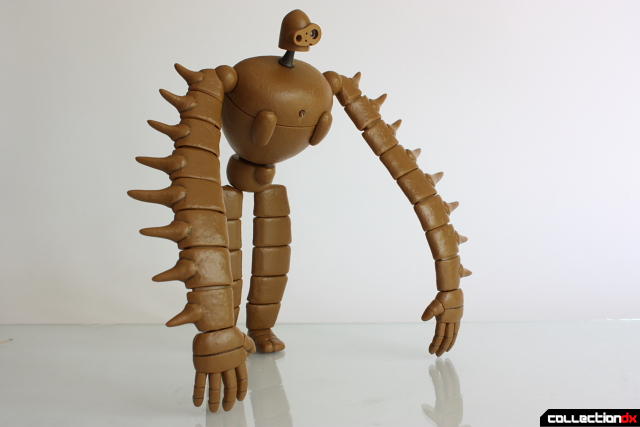 You can move the arms into the flying position. 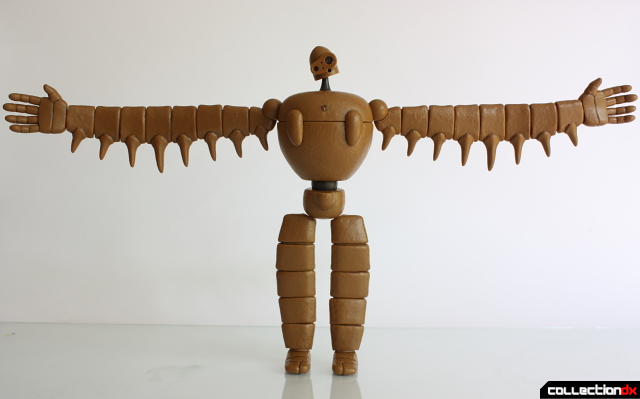 However the model looks very impressive just standing at attention. 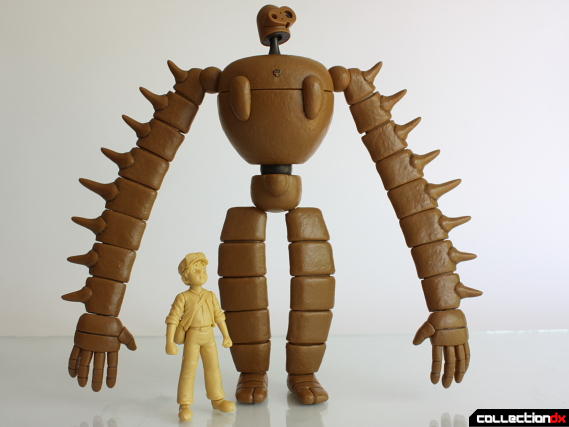 The head is well detailed and has clear and red lenses. 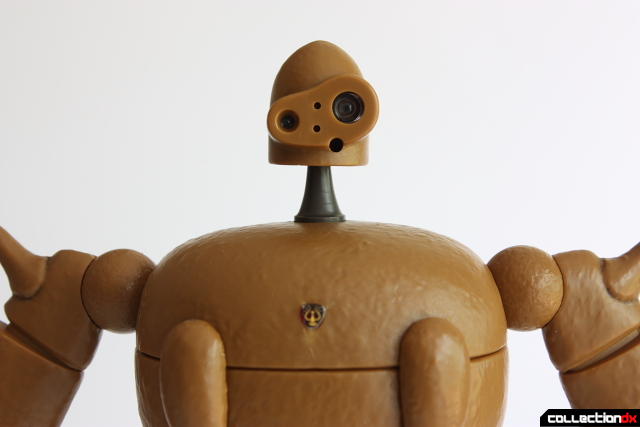 I really like this kit a lot and am happy to add it to my collection. The kit is a bit expensive at 3,800 yen, but i think that it is the best representation of the Robot Soldier to date and well worth it to any Castle in the Sky fan. You can get one at HobbyLink Japan (Hlj.com)

Excellent little kit. Might try getting it as a fan of the Laputa movie :) Thanks for showing this exists.

Nice sculpt, but a real missed opportunity. Those arms should be individually segmented.

" the segmented arms have a surprising amount of movement"

Yes the arms and legs are individually segmented, and each part has a little bit of forwards and back movement.

DO WANT. I've always wanted an articulated toy of one of these bots! Well, by "always" I mean since I saw the movie, but the movie is so ingrained in my head that it feels like I grew up with it. I'm gona have to track one of these down one day.