I was talking to a young kid about Soundwave not too long ago and I got all excited and I said " You know son, they don't make toys like they used to, there was this toy that was a cassette recorder that turned into a robot and then these musical cassettes would pop out of his chest and attack the good guys..." He interrupted me and said "What are these recorders and musical cassettes you speak off?" Exactly.

I imagine making a faithful release of Soundwave would not work with the newer generation of kids that have never seen a cassette player. However Hasbro has not forgotten that us older kids will want something reminiscent of what we remember, while younger kids will just want something really cool. Hasbro has really hit a home-run with this new Generations lineup which consists of some old molds mixed in with some new.

The toy comes in its humanoid form but for the sake of the review, I will start off with his vehicle form...yes vehicle form. This is his Cybertronian alternate version as seen in the War for Cybertron video game. It's quite a mean looking vehicle. It's got big teeth. It's like a huge armored tank which screams of alien technology. The gold trimmed "window" is a little tease of what's to come next. It is instantly recognizable to the G1 fans out there. 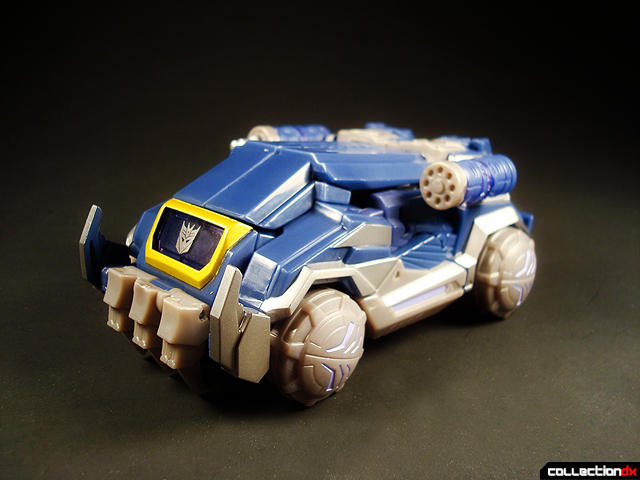 Moving onto the back of the vehicle you will see a continuation of the alien detailing. There are panel lines and vent details that let you know that this is from a distant planet. There are very subtle touches of light purple which give a touch of excitement to an otherwise plain blue and silver vehicle. 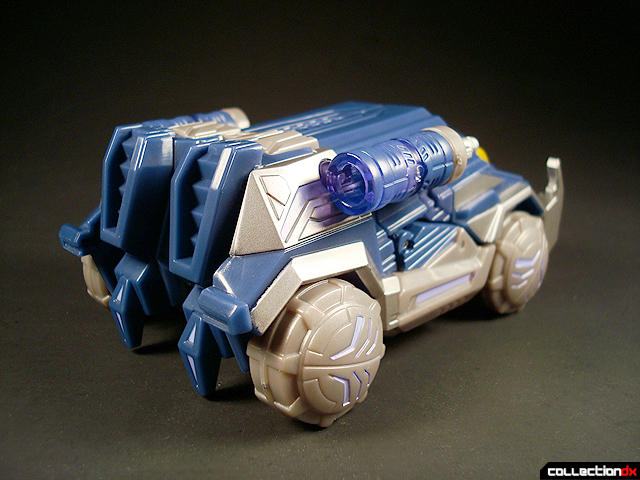 If we look underneath the vehicle mode, we see that everything is neatly laid out and organized. Every available bit of space is cleverly used. 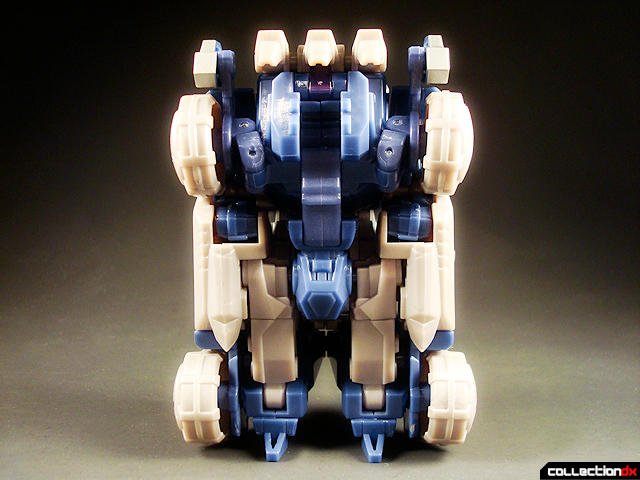 It's very hard to do a review about transformers and not go through the whole transformation process but in my opinion, it's not entirely necessary. I feel the fun is trying to figure it out on your own. A puzzle of sorts, if you will. This is not your 80's type Transformer. It is all grown up and full of new engineering technology. A lot of great engineering went into this figure. My old transformers consisted of three steps. Unfold legs, pull arms out, flip head around. Done. Not here. Some of the transformation I've seen in these figures lately is mind boggling and very impressive. Remember, I've been away from Transformers for a while, so to me it's very impressive.

After some twisting, unsnapping, flipping and magic, you are left with this piece of G1 inspired awesomeness.

Sexy up front, not so sexy out back. He's got junk in the trunk or kibbleage, whatever the in-words are these days. Nothing really bad. I've seen much worse. 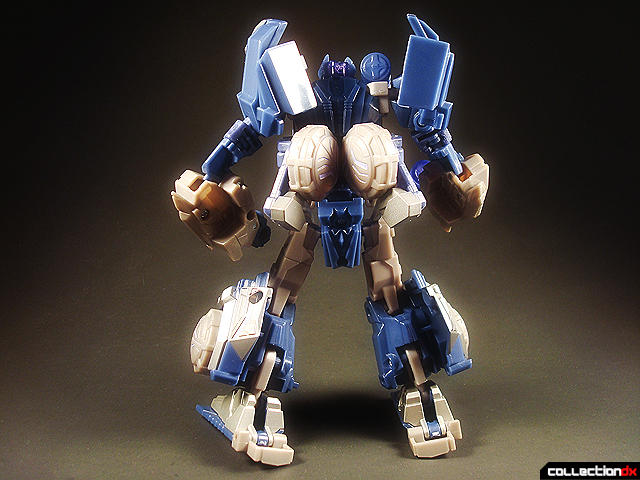 This face is unquestionably Soundwave. You have to love it. 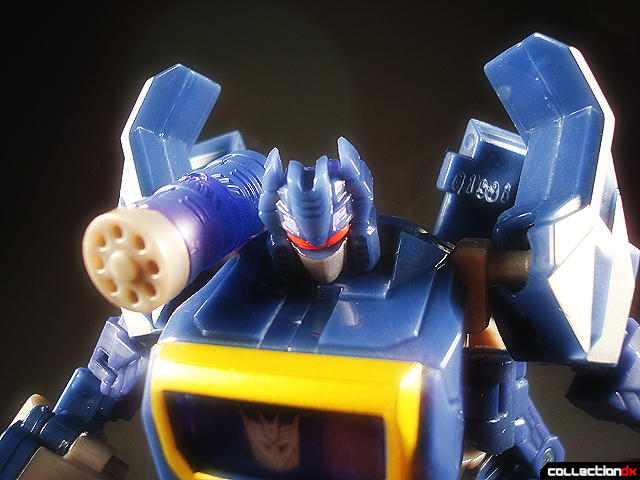 He retains his familiar chest look from which his little friends would pop out of and cause havoc, but alas, no Lazerbeak or Ravage to be found... You can, however, store his weapons neatly inside. Though, these are not of the battery variety. Still, they retain the battery look and the opening chest is a very good feature that harkens back to the days of old. 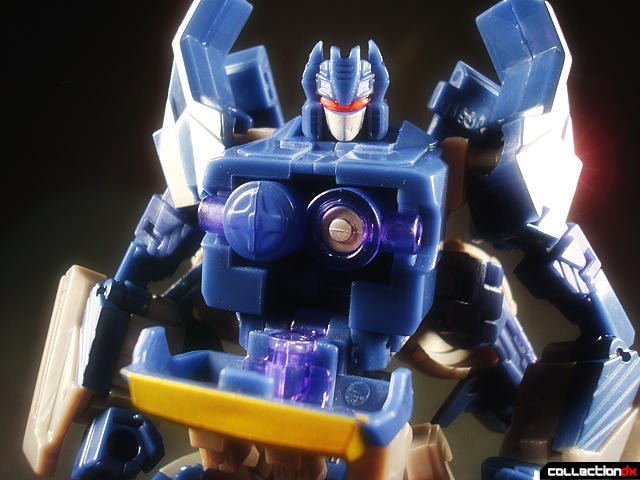 This is not your average blocky and awkward Soundwave, this guy can get down! 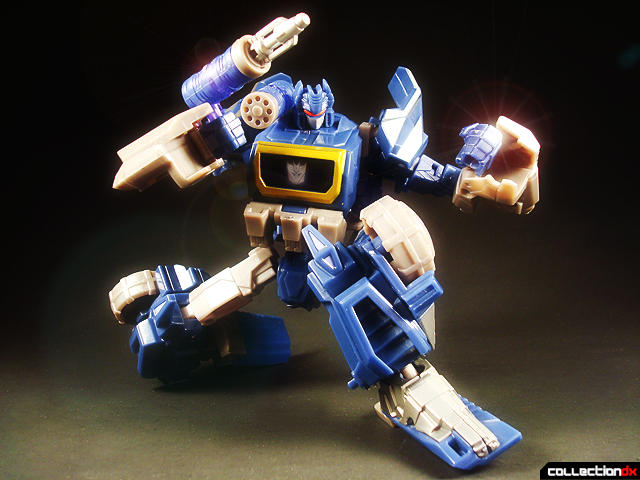 He can also kick some butt. This photo was taken without any of my Photoshop tricks to help him stand. He is standing on his own! 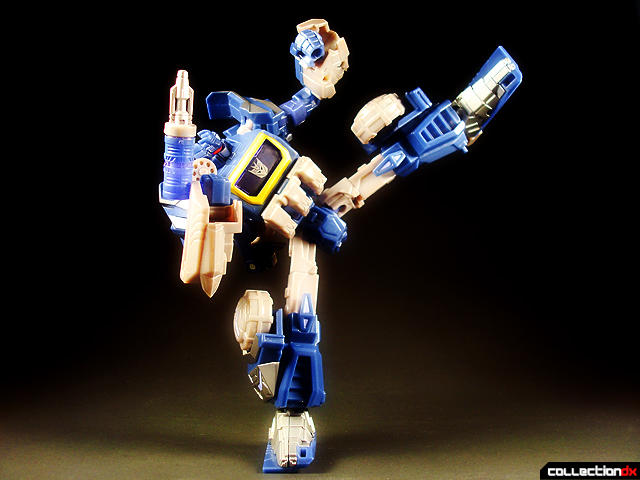 This figure has tons of articulation which makes this an outstanding toy. It's so refreshing to spend 1/10th of what I normally spend on a robot and have a ball playing with it. These things are meant to be played with and can take abuse. Parts are meant to snap off so they don't break. I'm not sure you can break the plastic if you tried. It seems like the kind of plastic that will just turn white when stressed.

Speaking of the plastic, this is probably one of my nitpicks about the newer non 80's Transformers. It's a soft looking plastic that doesn't quite capture the sharpness that an ABS type Transformer has. It almost looks like it is made out of candle wax or soap. I can imagine sticking him under hot water and watching him melt away in a bubbly fashion.

I don't know if it's an isolated incident or widespread, but my specimen suffered from limp hips. Its too new of a mold to be worn out so hopefully it's just mine. Maybe another owner can chime in.

Other than those teeny complaints, I love it. I have to say that I am once again addicted to Transformers. This lineup has revived my want for more TF goodness. I missed the whole Universe/Alternators/Reissue era because I was spending money on race cars, but now I'm back. Stay tuned for more.

I think for once Hasbro did the impossible, and made a Better Megatron than Optimus with the War for Cybertron version. I've seen the figure up close and it really is not one to skip out on. Finding it is the trick.

I agree, I wasn't really into the Megatron until I found him, then let him sit in the box for a month and opened it the other day. It feels solid and joints are real tight. I may get around to doing the review for it while Im on this TF kick.

I looked for him a few days ago, but ended up getting Generations Megatron. I didn't mind since I planned to have him too, but I have the urge to get Soundwave anytime sooner!

The only downside of this figure is the exclusion of Soundwave's little minions. The game had Lazerbeak, Rumble and Frenzy, but none of them is packed with him. Boooo.

Oh, and did you know that he got a secret third mode?

Nope, did not know about the secret third mode...but I thought maybe I saw a picture of him as a boombox? well a futuristic one? It might have been a dream I dont know or I saw it forever ago in some forum.

By the way, he was darn hard to find.. Believe me I tried and went to hell and back with nothing. Just found him two days ago in a distant Kmart in a forgotten corner of New Jersey. Good luck in your quest.

Not a bad toy, and the vehicle mode is clearly also a partial nod to the recent TF: Animated series, which seems to have had a slight added influence on the game designs. I do kind of prefer the earlier stealth jet-based proto-form with the hex-pod Laserbeak, though it suffered a bit from awkward legs and arm kibble.

As Shinobi-03 hinted, there is an extra mode that can be seen in the game art which can be satisfactorily repro'd with the toy that should look a little more familiar. A little bit of googling and you'll see what I mean.

On that note, as a pedantic old pre-TF fan, I will comment that Soundwave was NOT a boom box. That would be Blaster. Soundwave was a full-scale micro-cassette recorder, of the sort often used for taping lectures or dictating to back in the day (and thus all the more inscrutable to today's generation, heh). All the cassettes were micro-cassettes, though this was blurred later. Blaster was obviously cheated down in scale some, and did not use the micro-cassettes in the original MicroChange version, which instead contained a working AM radio which Hasbro lamely decided to leave out to reduce costs. There were full-sized transforming cassettes in the MicroChange line, but they turned into vehicles (a motorbike and a helicopter) for the Microman action figures they were packaged with. I suppose they would have worked well with Action Masters, lol.

Oops thanks for the correction! I was trying to think of the right word for him...RECORDER haha, haven't heard of that word in a while. I will be updating to reflect that. wow I love this toy.

Definitely the best of the War for Cybertron figures, mine has dodgey hips as well. Megatron was a big disappointment and pales in comparison to the other 3, and I agree with EVA , jetfire and especially Omega Supreme from the game would be so sweet

Yeesh. He looks a little busy and jumbled to me.

There's an unofficial third mode too. You can make the boombox from the commercial for Shockwave by dong some twists. You can look it up on youtube for sure

Still looking for this guy! Got completely lucky when I found Megatron, and he's just awesome. I agree with the above statements that Megatron is much better and more fun to play with than Optimus. I do like Optimus, but he's kinda awkward to pose. Megatron is easy and fun, and Soundwave looks just as good. I love the look, especially. Hope I can find him in stores!

I had luck finding him at a local Kmart and I also saw him at Target for the awesome price of $9.04. Good luck in your quest

the 3rd form is great. Not boxy boombox, though, a bit more modern home cinema kind a thing

This review shows the boombox,pretty damn cool. Wonder why they didn't just incorporate it into the instructions.

An OK mold, wish they would've used Starscream instead of him for the second Decepticon in this line though.

Hopefully the tie-in figures for "War For Cybertron 2" will fix that problem!

I just received mine..no loose hips whatsoever..Great FIG!! I got my Megratron, Bumblebee, Optimus and am really happy about it. I even got Blurr and Drift and their both awsome.

I actually just bought this figure today, and it came with two right fists. Does this happen a lot?