Revoltech is back on CDX!

Gloomy is a character created by designer Mori Chack. Gloomy at first seems to be your typical cute bear, but then you notice the claws, and then the blood. The story behind this is Gloomy is found by a boy named Petty. Gloomy is cute as first, but as he grows he begins to attack Petty. You can check out some awesome interactive flash at Mori Chack's official site here. 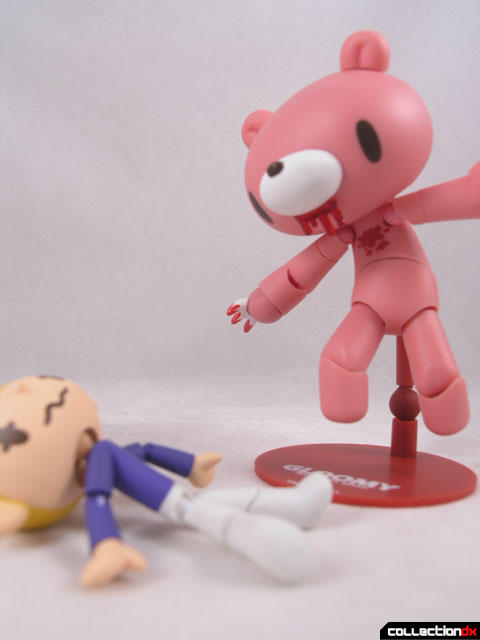 I first learned about Gloomy in 2002 I think, with these crazy animated gif files of this pink bear beating up a kid. It was a chance encounter in Tokyo's Kiddy Land toy store in 2003 that I saw my first Gloomy merchandise. I thought it was awesome of course.

Years went by and Gloomy began to invade America. First in comic stores and import shops, later in stores like Hot Topic.

I'm actually surprised it has taken this long for there to be a real action figure of this.

So, Gloomy Bear comes in the new style Revoltech box, which is larger with more things visible. Included in the set is Gloomy, Petty, two stands, a muzzle, blood and a Revoltech container. 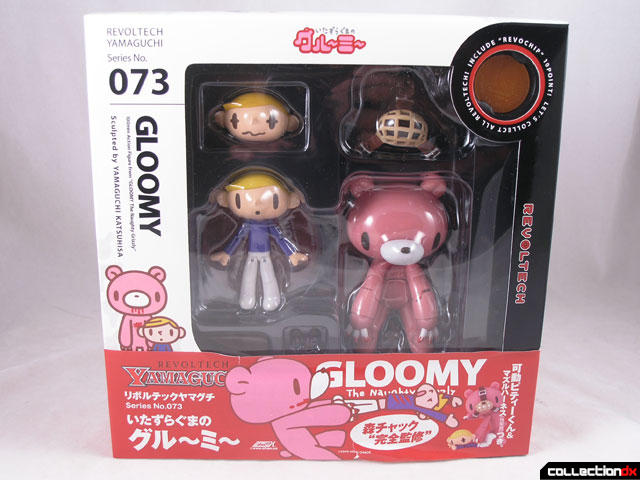 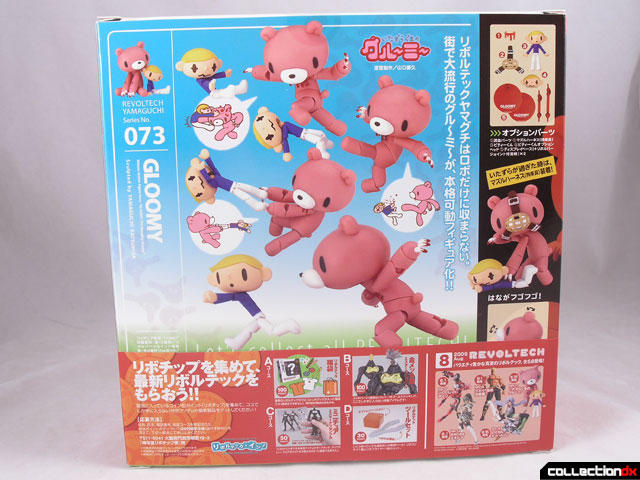 The Gloomy figure is not bad at all. Yamaguchi did a good job of trying to hide the joints. 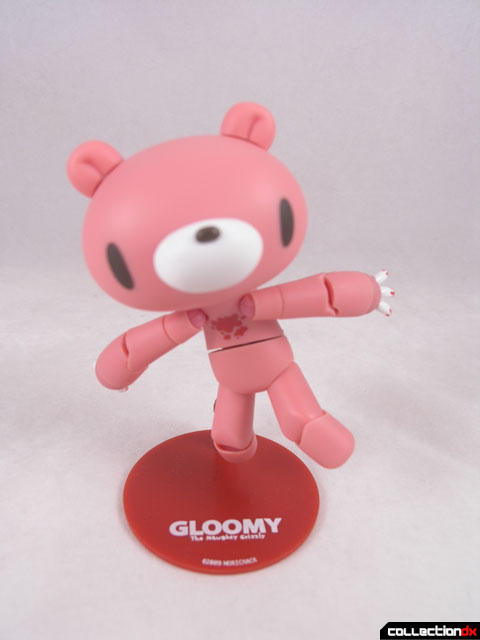 Articulation is not bad, but there is only so much you can do with the figure. You have Revoltech joints in the head, shoulders, elbows, hips and knees. There is also a swivel joint in the waist. At the end of each arm the whole claw assembly is on a hing that allows doe smooth movement. 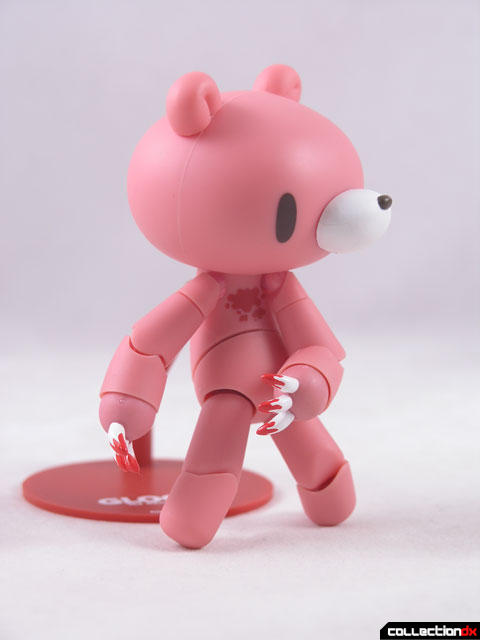 The figure cannot stand on its own due to the rounded legs, so you will need the stand for that. Gloomy's often depicted sitting, and that works just fine. 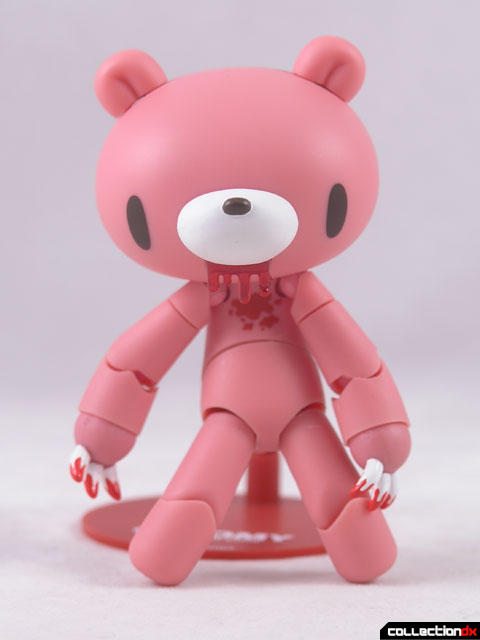 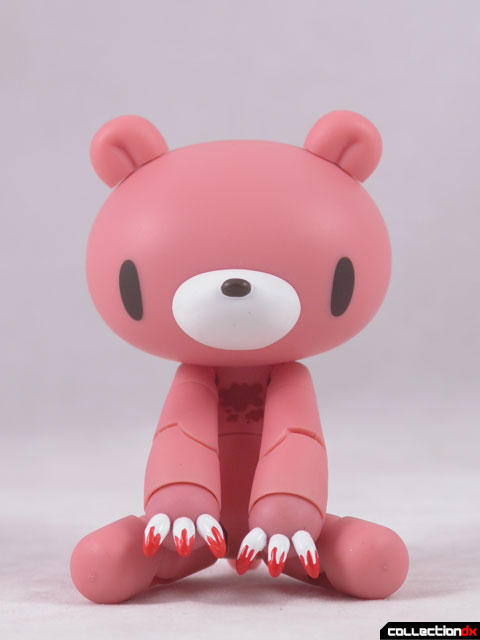 Gloomy is a naughty grizzly bear. If the blood stains on his chest and claws isn't warning enough, there is a translucent red blood accessory that attaches to the bottom of the nose. One neat feature is that the nose and ears are connected to each other and moveable. If you pull the ears back, the nose will move. 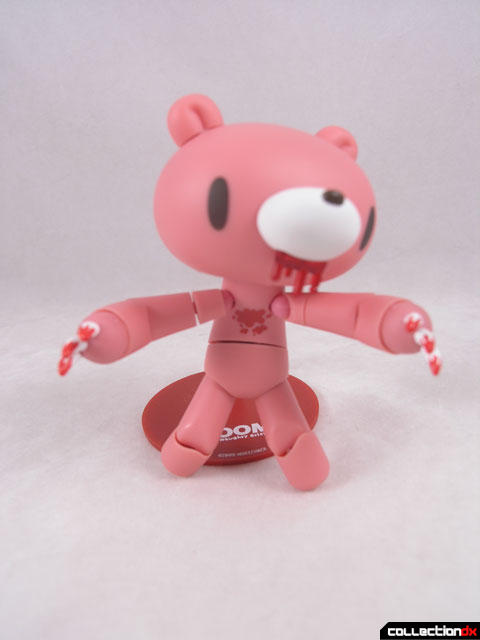 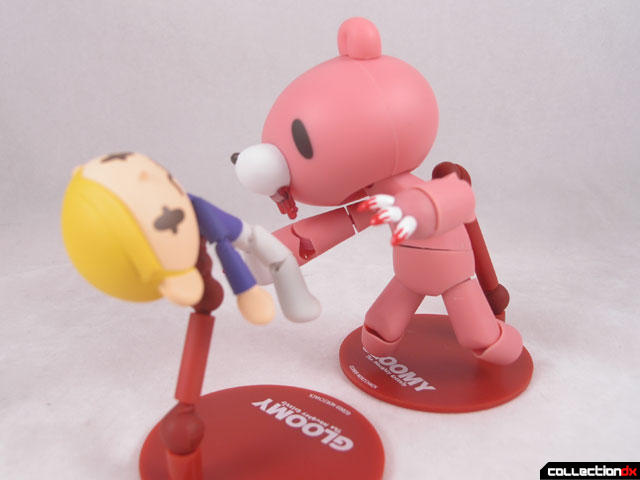 Included in the set is a figure of the victim - a small boy named Petty-chan. Petty is fully articulated, but the only Revoltech joint is a dual joint in the neck. Petty comes with two heads, but swapping them is a pain in the ass. Taking the head off is fine, but getting that dual joint into the hole in the head is near impossible. I needed to use a pencil eraser to stuff it in. 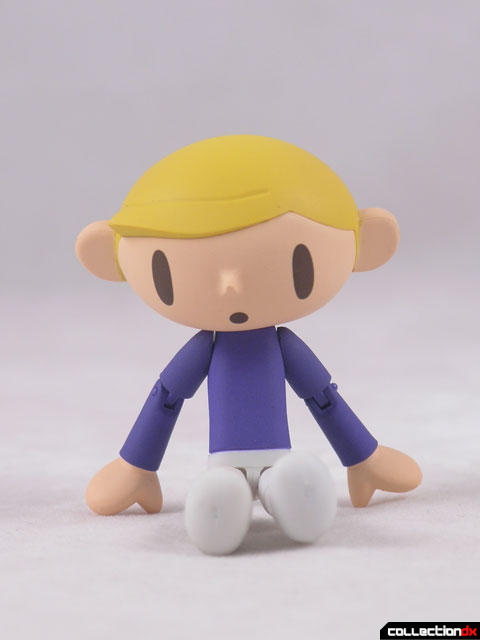 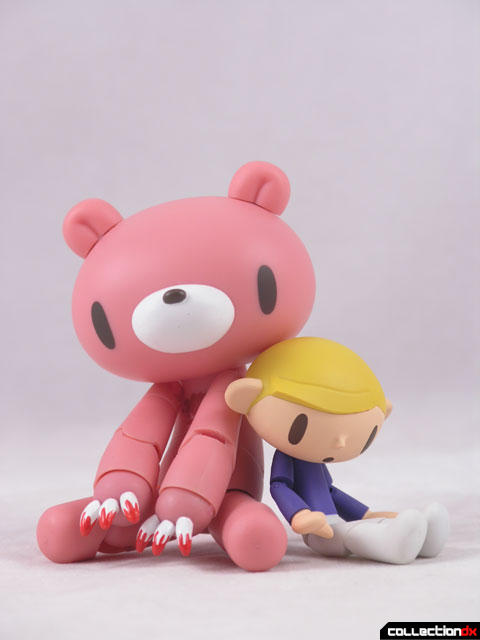 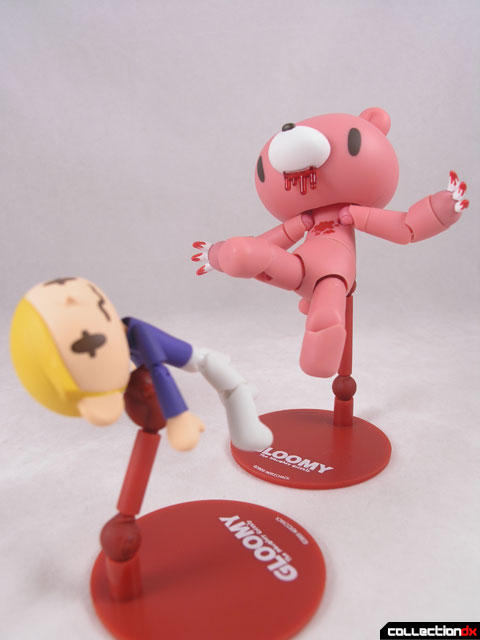 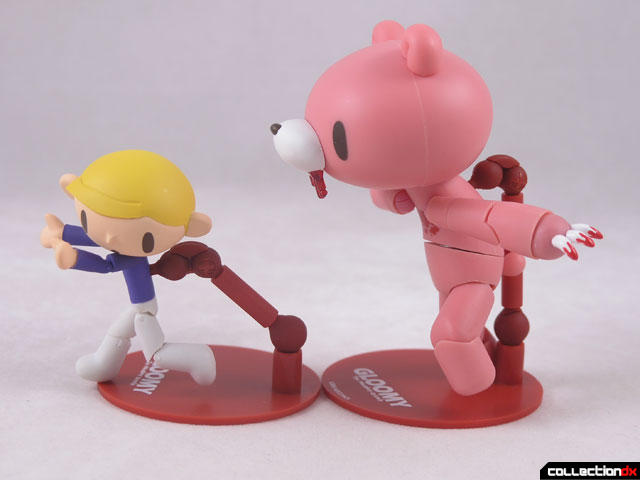 The best accessory in the whole set is the muzzle. It gives Gloomy a Hannibal Lechter vibe. To put the muzzle on, you have to remove the head. 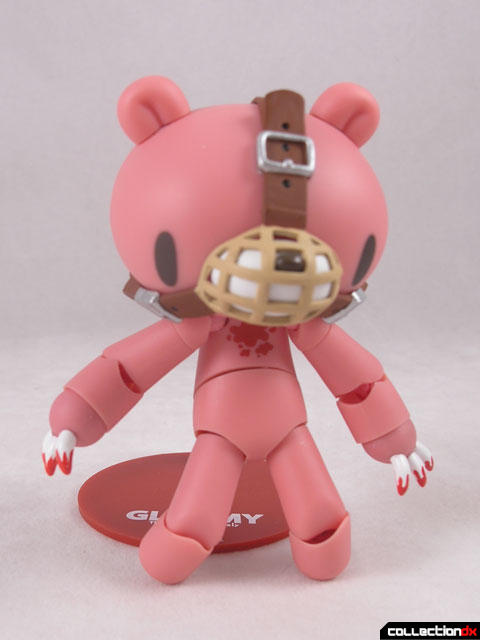 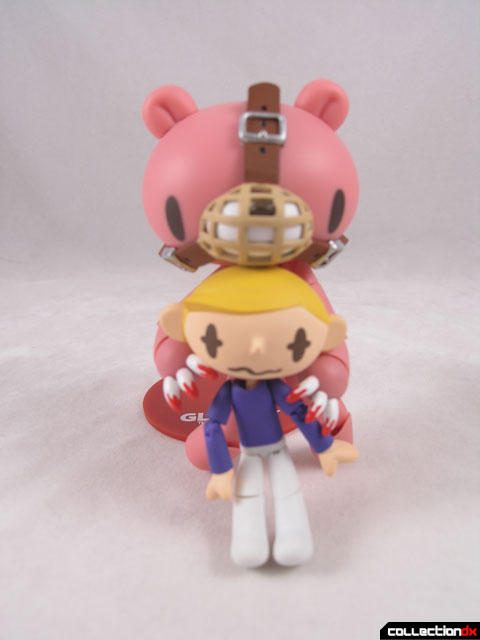 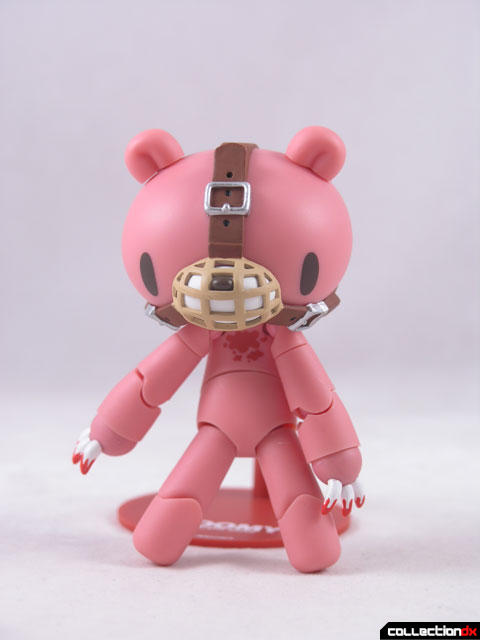 Also included with the figure is a Revoltech coin (used to redeem for special items) and a Revoltech Container. This amber case has a removable lid with holes the size of Revoltech joints. 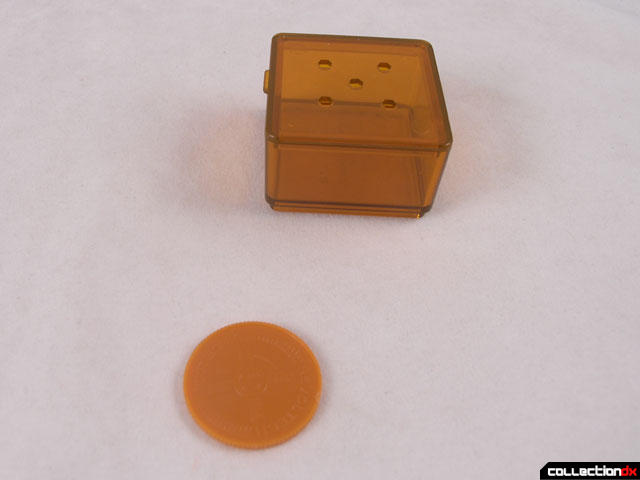 Unlike the Doko Demo Issyo Revoltech, this is my style. I have a soft spot for Gloomy, and this is a great toy regardless of the character. You can get your Revoltech Gloomy Bear from HobbyLink Japan. 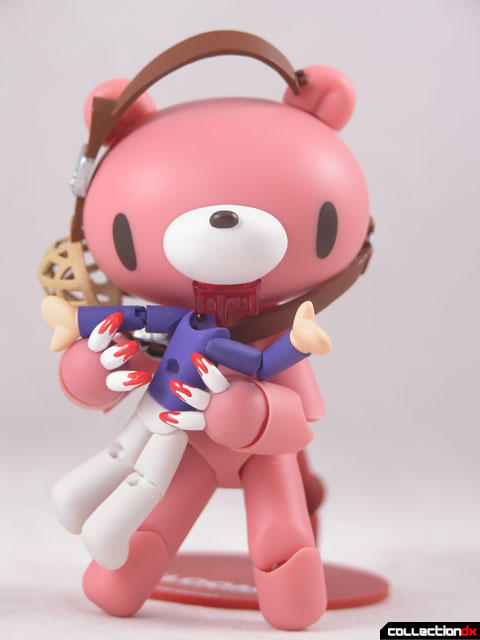 9 comments posted
The Revoltech box is to

The Revoltech box is to store spare pieces and accessories you might have from your Revoltech figures. It seems pretty useful for the standard figures like Gurren Lagann or any of the Macross Valkyries, but I don't know why they included one with Gloomy Bear... Kind of an odd choice.

I thought about that, but it seems that the box is too small and the cover too flimsy to store most accessories, aside from fists and the like. Who knows..

I've probably mentioned this once or twice before,but I hate hipsters.

Do you consider this a hipster toy?

Well,I was half joking,but to be honest it does have that stupid "cute but adult" vibe like a lot of those people are into. Like Happy Tree Friends,or those "ugly dolls" (is that what they're called?) and so forth.
Something just rubs me the wrong way about this type of thing,and in fairness,it's really not the toys themselves,it's certain members of the "community."
Eh,I guess it's just not my thing.

I have a lot of friends still in high school who are girls and simply LOVE all of those things. Plush Ugly Dolls, Domo keychains, Gloomy Bear stuff, etc. I guess it's just not really the sort of products that's aimed at the same people who buy Chogokins or vinyl pieces as much, huh?

From what I heard the container might be not necessarily for the accesories, but for the coins so you don't lose them until you get enough of them to pick up a mail-away item you pay with them for.

Just like I fell for the Yotsuba Revoltech I fall for this, this toys so adorable and cool. I'm not a fan of Happy Tree Friends happy violent cute characters, but this is completely different style despite some theme similarities. Totally want this one :)

Great photos and posing Josh! Loved the pic of gloomy chasing Petty-chan. I think this toy looks pretty friggin' awesome! Dig the blood stains all over the bear!

Well as I don't really agree that this is 'hipster' so to speak; I don't think that is really the word for it, the sort of stylized things like this never really sparked much interest in me.
This design however is actually quite nice I absolutely HATE the Happy Tree Friends and all that jazz that the kiddies were into and I actually kinda get why that sort of thing would be called hipster.

I have seen Gloomy bear merch around and never knew where it was from haha I guess I might check out the videos at some point.