In the anime Macross plus, the VF-11B Valkyrie is the standard service valkyrie until the decision was made to replace it with one of two fighters - the YF-19 or the YF-21. While the new fighters are more advanced, the VF-11B is no slouch.... 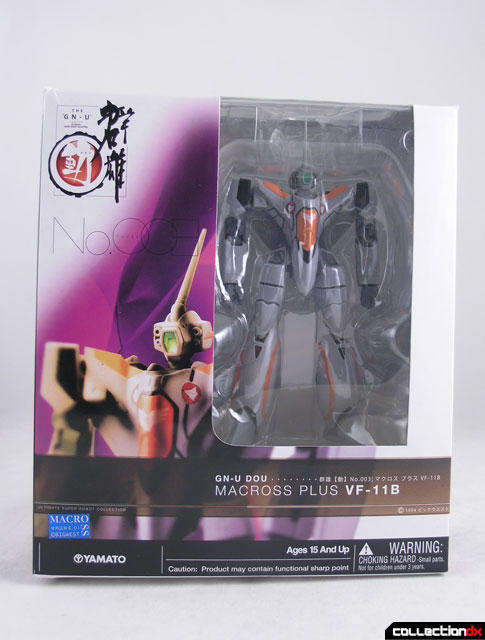 In a way the VF-11B is the little valk that could.. it's the underdog, and I always have a soft spot for the underdog.

I always liked the design of this battroid, and I actually liked the early Yamato 1/72 Valkyrie, despite the QC issues. I just thought it was a great design that didn't get enough love - until now that is. 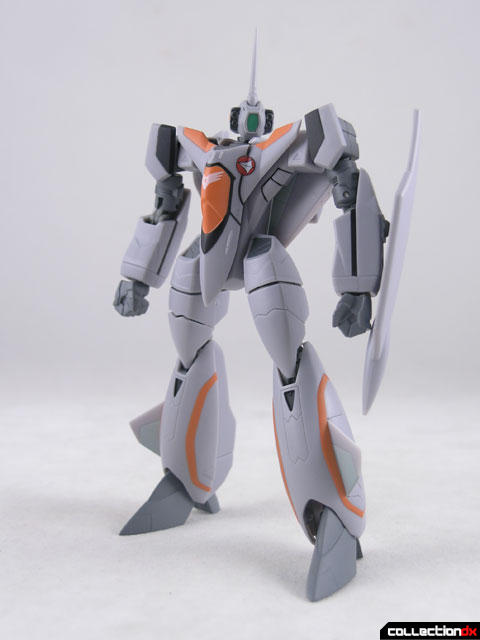 The VF-11B is the third entry into the GNU-DOU line and it keeps up the fantastic quality of the previous releases. The paint detail is crisp, the molding sharp, and there is not a screw hole in sight. Accessories are sparse with only a few variant hands and a gun, but really, that's all it needs. 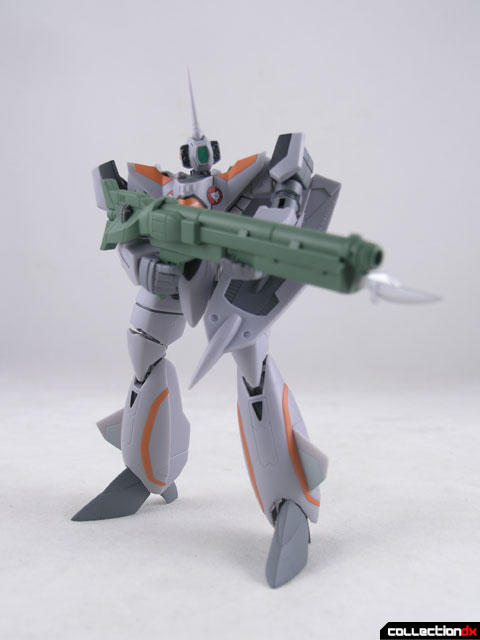 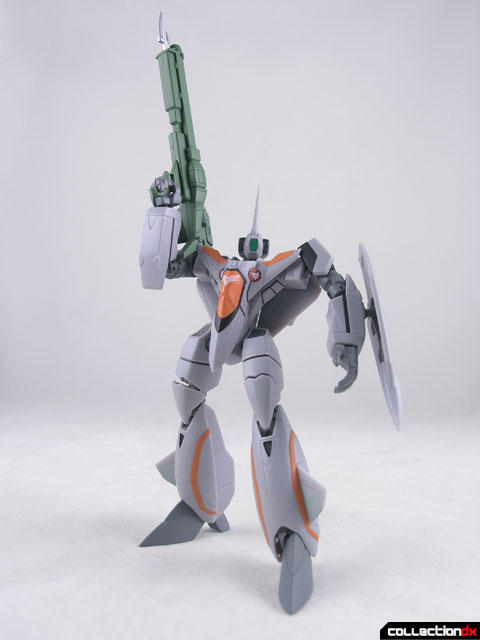 The gun seems a bit big for the figure but it looks damn cool. There is also a shield that pops into the arm with a ball joint. 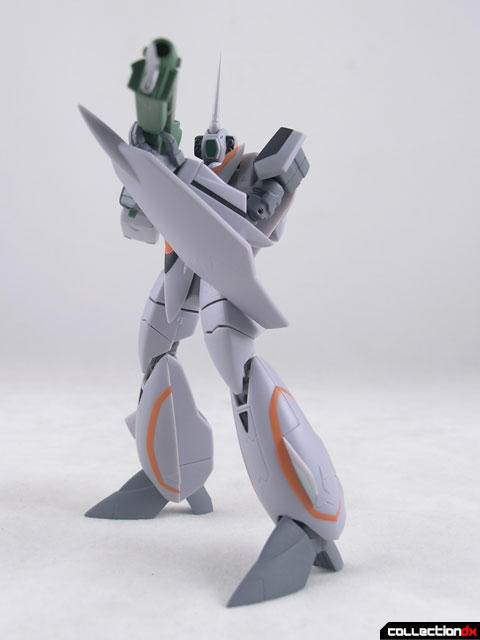 I'm not sure what the exact makeup of the materials here is, but it seems that the body and limbs are made of ABS while the jointwork is made out of POM. 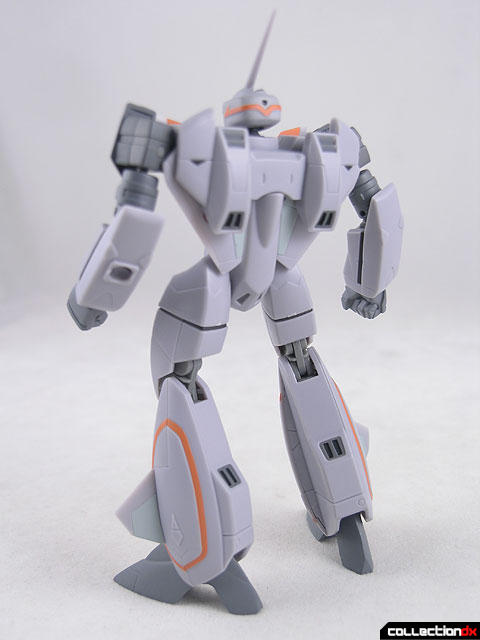 In addition to the awesome articulation, the VF-11B has a moveable antenna and moveable wings. 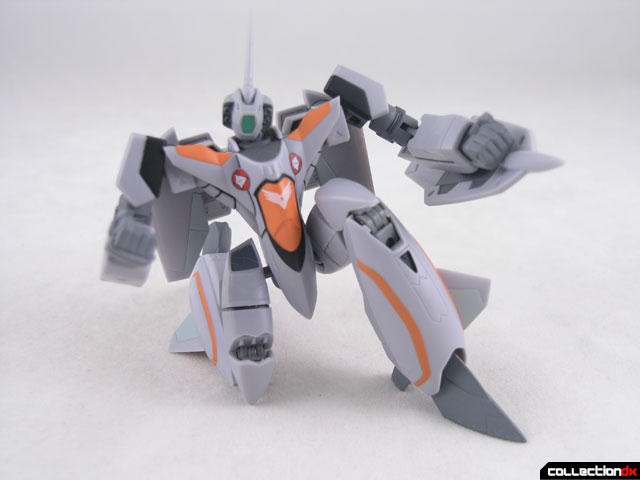 So, if I haven't beat it into your head yet, go get one. Where Revoltech has chosen to also release their versions of the YF-19 and 21, they have decided to overlook the VF-11B - so this is your only chance to get one at this time. 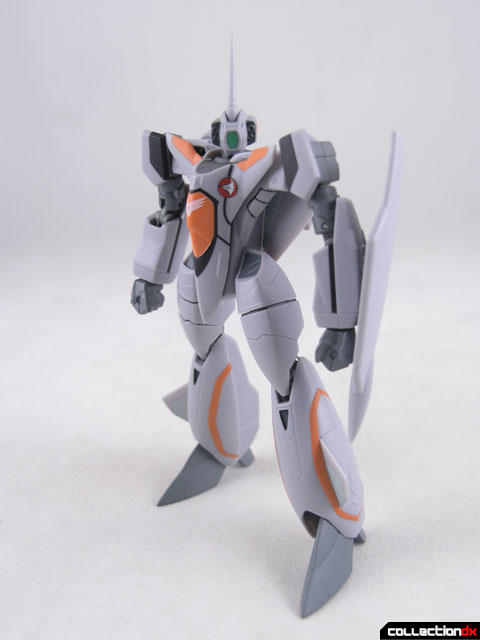 Well, Isamu for one.

Personally, I think it's best not to judge the toy lines, but rather each toy seperately. I find that too much brand loyalry can blind you to excellent toys another company puts out.

Besides, there are so few GNU-DOU figures out as opposed to Revoltech you wouldn't be able to make a good comparison.

I wish Yamato would include some stands, even simple ones would be nice. Paying about 30 bucks for it, so a stand wouldn't be too much to ask.

hmmm i wonder if they put gundams in their line

Bandai has Gundam by the BALLS. If you want a really high quality gundam toy get a EMSIA.

Is EMSiA a typo,or does the "E" stand for something I'm not aware of? Are they better figures than the usual MSiA?

are the articulation of (EMSiA) like the revoltechs? or are they just good?

Dude, you have no idea how nice EMSIA's are.

1. They have amazing articulation.
2. Tons of accesories
3. No bare plastic (except maybe on joints) everything is painted.
4. Great QC

My personal favorite part of the line is the ankles. These ankles can almost always be level with the ground.

Wow never thought they were that good! Just saw one in utube,Man must buy one! Thanks for the info Viokni!!!

I own a Revoltech EVA-01, it has nice detail and accessories but is very small for the price and annoying to pose. From all the Revoltech products I have seen these GNU-DOU figures look miles better. All Yamato need to do now is produce a 1/60 version for the rest of their Macross Plus line.

Weird, I bought one of these back in 2002, must have been an older version, and it broke at the hip. I still think I got the parts somewhere. Luckily, I only paid a little over $20 for it.