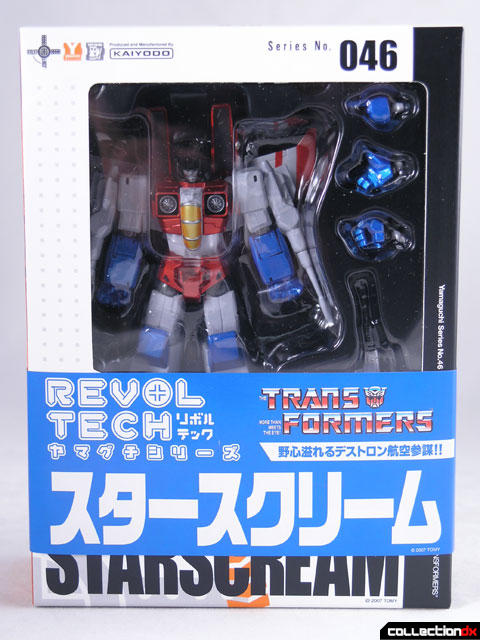 Starscream is second in command of the Decepticons, but his desire is to usurp Megatron and become leader. He is one of the most iconic characters in the Transformers saga, and he is the fifth Transformer to be made into a Revoltech. Starscream's design here is a mix of his appearances in animation and comic books. He is available from HobbyLink Japan. 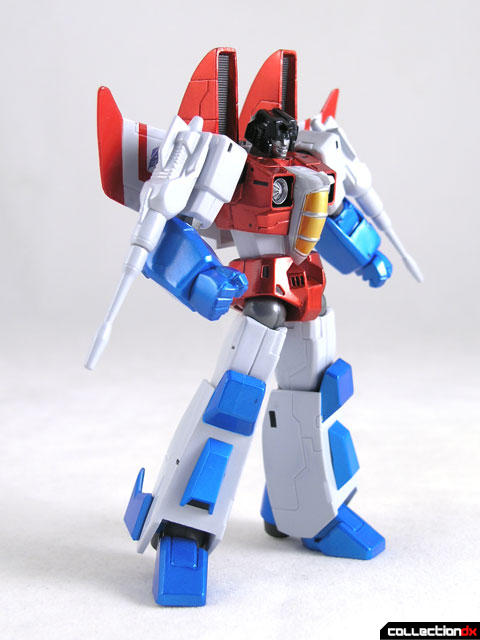 The fit and finish on this toy is really nice, and there are some nice touches, such as the fins on the back of the legs, the moving cannons on the arms, and the nice back detail - a view we don't normally get to see on Starscream. However Kaiyodo doesn't give a whole lot else with the toy. 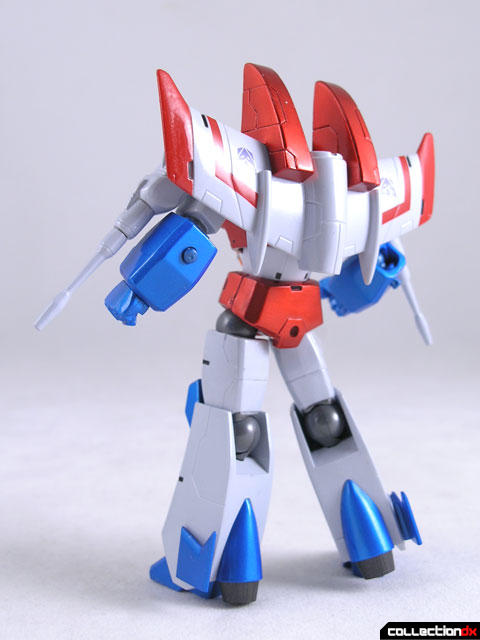 Included accessories are Megatron in gun mode, a few extra hands, and a stand. Thats it. What about Starscream's crown and cape? How about a variant head? 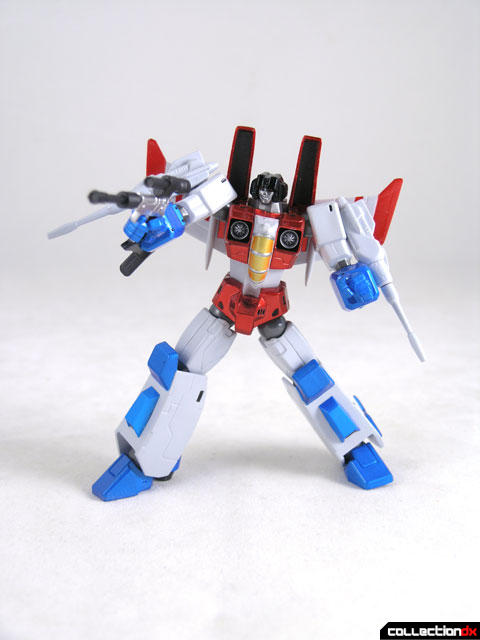 Megatron fits into the right hand of Starscream using one of the variant hands. The shoulder stock separates to allow you to slide the handle into the hand. 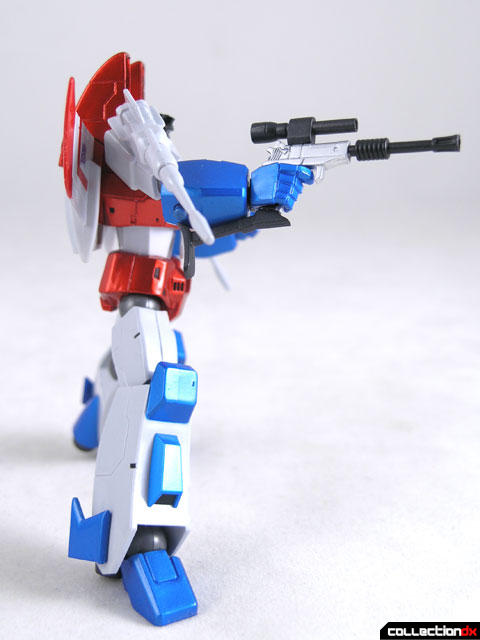 There are a few variant hands, nothing remarkable. 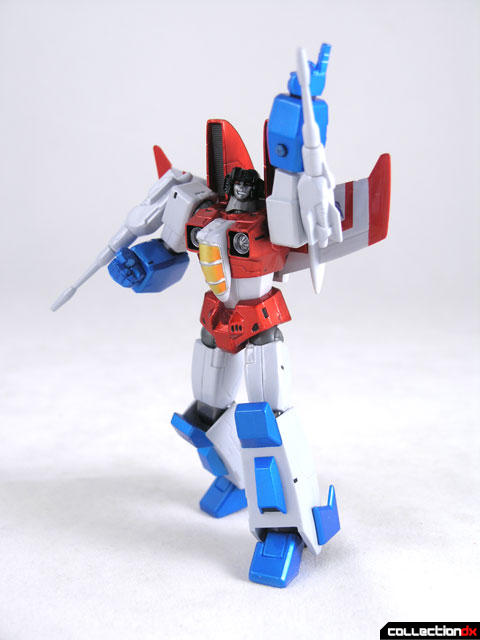 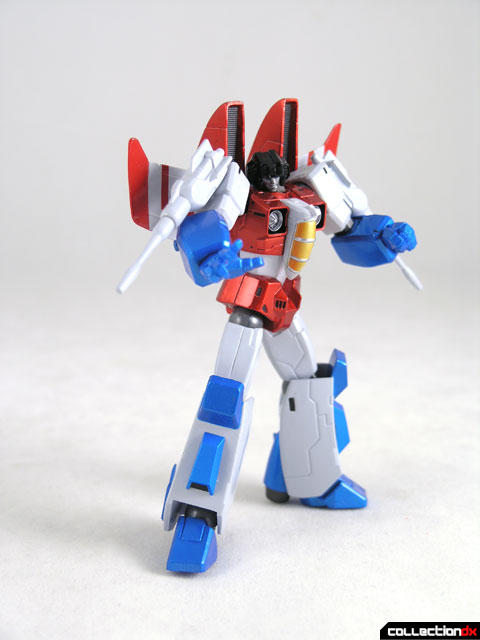 The stand is your standard Revoltech stand, aside from the "Tomy" marking on the bottom. 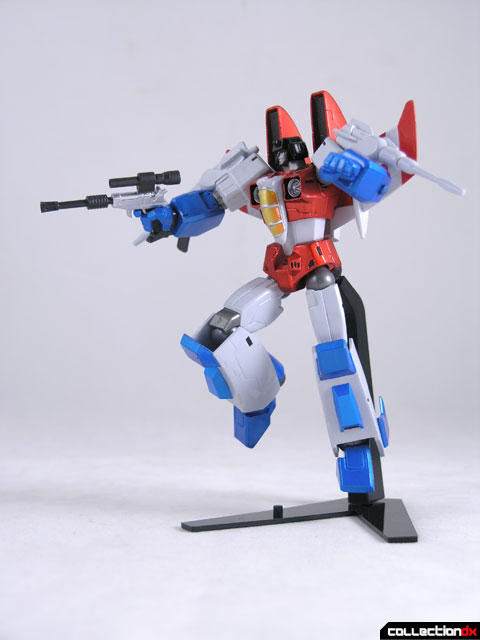 There's nothing wrong with Starscream. He looks great, he poses great, he's a great character. I just wish Kaiyodo did something more with him. Starscream is available from HobbyLink Japan. 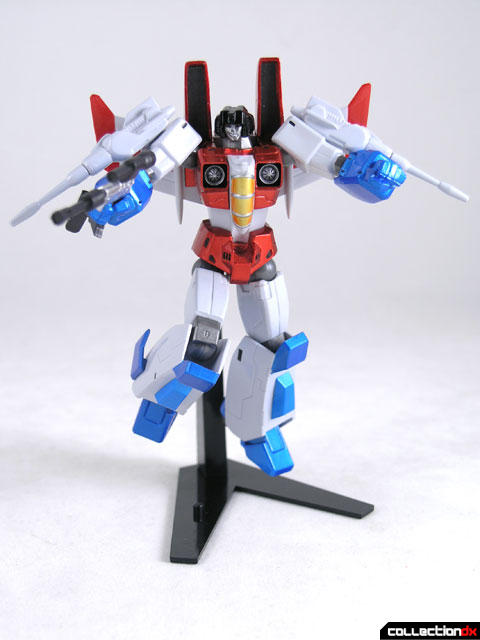 11 comments posted
It's a shame

If they'd released all six seekers in the Classics format, I'd've been all over them (Taka-Tomy, are you listening!?).

Plus, I still don't get the whole "it's a shame..." thing when people anticipate repaints of figures. We seem to get into this discussion a lot. I just don't see the problem with have MORE options. Some people are completists and will want to get all of them. Fine. Some people (BigD, I'm looking at you) are nuts about particular characters (Skywarp). Perfect.

I say get what you like...who cares what other people get. More options are a good thing.

They did release all six in classics format, you just have to be willing to sell your soul and first born to get three of them.

Starscream and Ramjet were regular releases.

Skywarp was packed with Ultra Magnus in a Target exclusive set.

Thundercracker, Thrust, and Dirge were part of a Botcon package a year or two ago. Those were going for upwards of $500 back then, and there's no sign of a reissue.

I just got the Robot Masters version of the original three. Cheaper and better IMHO.

Yeah, I forgot about the Botcon exclusives. Well, we were there at Botcon (as the precursor to the 2007 East Coast Summit). You couldn't PAY me $500 to wait in that line. F that noise.

Not sure how many of you are of similar breed, but I tend to get 'sets' so as to be able to pose them in bunches. So getting a full set after getting the first one (provided it was good enough in the first place) is usually not far off.

Problem is when the $ is uber high (e.g. CM's alpha & beta fighters). I love mospeada, but getting all blue/green/red combo is just too expensive. Will definitely stop at one, just like my govt's one-child policy in the 80s & 90s.

Starscream might be an oddity though. Bec' its a cult figure and fan fav, some fans might just have a RT starscream irregardless of their current collections.

The Robot Masters were sort of a precursor to the Classics line. It tried to take a range of characters and give them a decent character toy that still transformed into the vehicle.

Starscream and Convoy were the only standouts in the line, the others were either repackaged Machine Wars or just lame designs. Later Takara made a nice e-hobby 2-pack of Thundercracker and Skywarp recolors of the Starscream mold.

They can be tough to source since they didn't go over well (understandable considering the other pieces in the line) but they've been knocked off almost perfectly for very cheap. They are almost identical to the classics in scale and design, but more toy-like than the classics.

Here's a review found on the web. (no affiliation)
http://www.16bit.com/tfrm-starscream.asp

The old Mega SCF Starscream has the cape and crown too.

Thanks for the link to that review. If you didn't provide it, I woulda been too lazy to look the thing up! :P

And, of course, if it weren't for this discussion in the first place, I would never have been interested in learning more about these Robot Masters!

Anyway, I remember when these came out. I remember being thoroughly unimpressed with how they look. Unfortunately, I still think this holds true for me now. I think if someone were to do a side-by-side comparison of RM Starscream, Classics Starscream, and this RT, I think the Classics would come out on top. It looks VERY good in both modes--not quite as characterful in robot mode as the RT, but vastly superior in both modes to the RM, in my opinion...and, of course, the fact that it can transform *at all* makes it superior to the RT.

Hell, I've been saying that if they just took the Classics seeker design, blew it up to 1/48 scale, reinforced the joints, and added a little diecast, that would be the "Masterpiece" that would convince me to fork over $50+.

While this looks nice, Classics Starscream is still tops for me. Revoltech TFs are a good scale/size match for that line.

I really liked the Rodimus and Starscreams from the Classics series so i don't feel a need to get these two.

I dislike how Revoltech is including less and less gear with each figure. Eliminating the extra heads and weapons makes that $15-20 price feel a little too much...

Thats not necessarily true. The TFs in the Revoltech line have never had many accessories, while many new figures still have many.

There are some that get bothered by all the hands and crap they have to keep track of after they display the toy. One thing about having all this stuff is now you've got boxes everywhere with extra hands and bits. I think maybe they just decided to include the bare essentials since the majority of people buying this wouldn't necessarily be toy people.

It also leaves room for a second release with other stuff. It wouldn't be the first time a toy got multiple releases with different parts, forcing some to buy both.