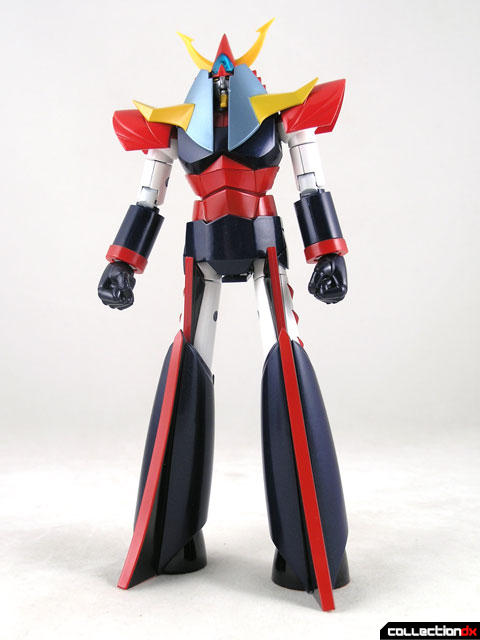 We’ve already discussed the previous SOC Raideen set in great detail in another review, so here we are just going to discuss the differences between the two sets. The Raideen figure itself is essentially the same as in the other set, with the exception of the arms and legs being white instead of chrome. This is how Raideen appears in the show, and also how the first edition chogokin was decorated. 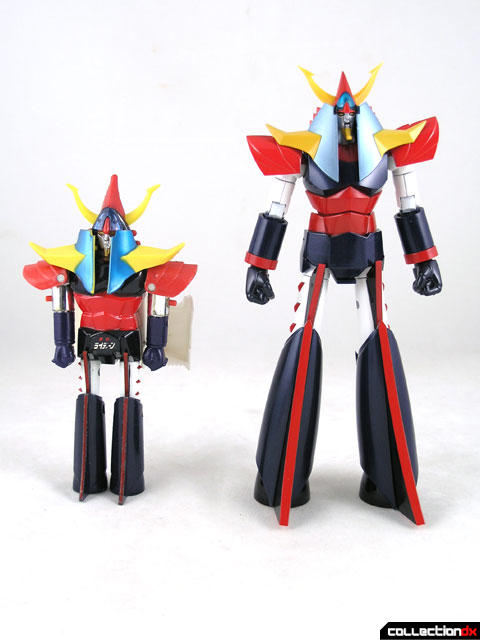 All of the accessories from the standard set are included in the deluxe set. 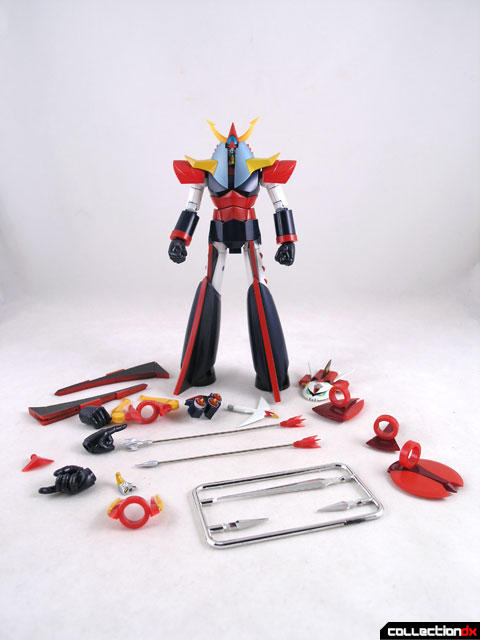 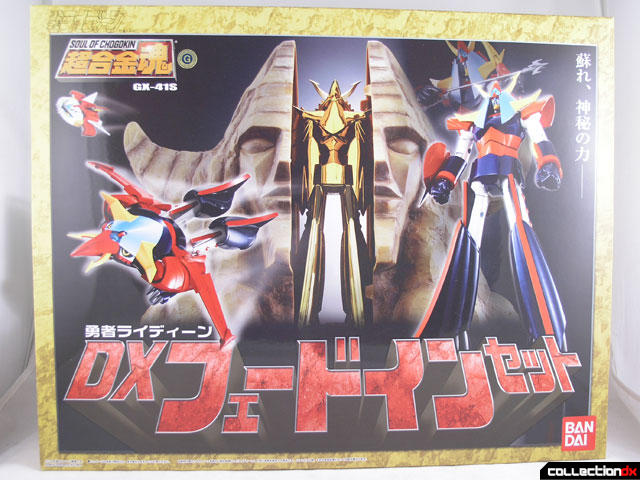 The box here in this set is a monster, maybe the biggest SOC box to date. Inside is a Styrofoam container for Raideen, multiple plastic trays, and a large box. The included manual has more pages than the standard manual, and features additional concept artwork for Raideen. 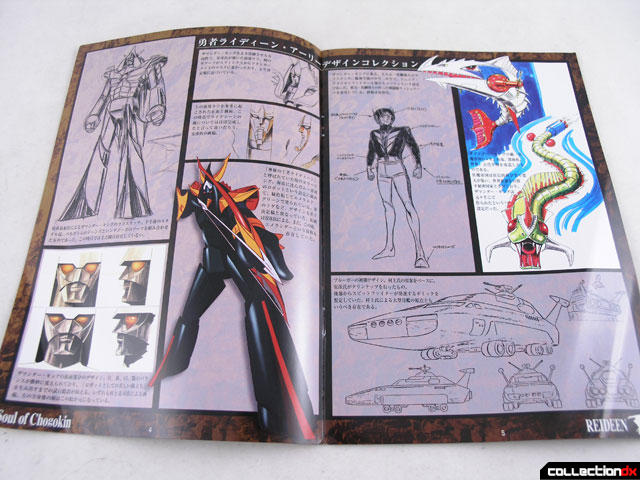 All the previous accessories are there, and the DX set includes a bunch of additional accessories from the show.

Gogun Sword looks like a bow but is instead a large, double bladed chrome sword that fits on the left arm 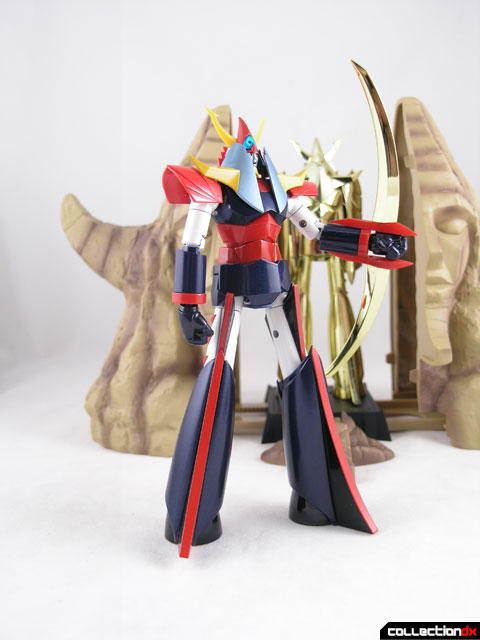 Jet Boomerang is similar to the God Boomerang, but has extra details, and does not close. It too adheres to the right wrist by a magnet. 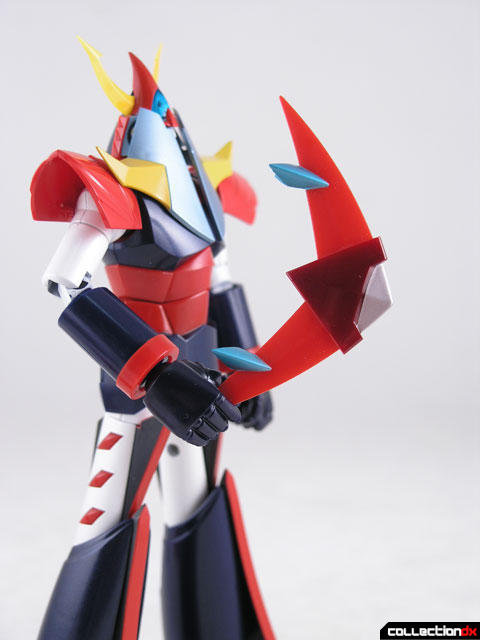 God Block Big Spin is a big shield that looks like a surfboard. This shield is permanently attached to the wrist ring and can spin 360 degrees. Unlike the other wrist accessories, this one is firmly attached. 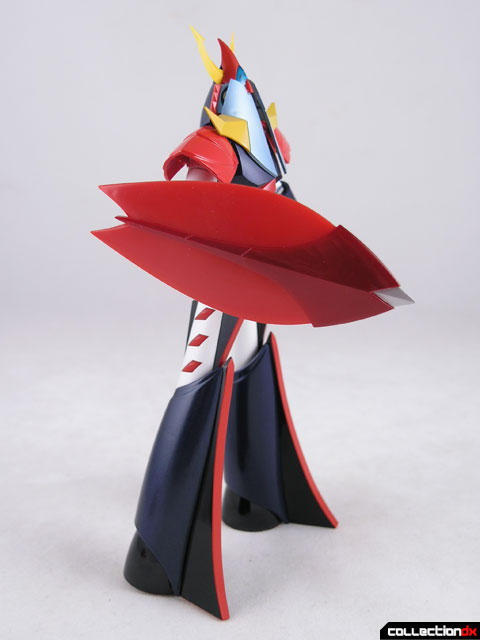 Energy Cutter is a beam of energy that comes out of the base of the God Breaker shield. 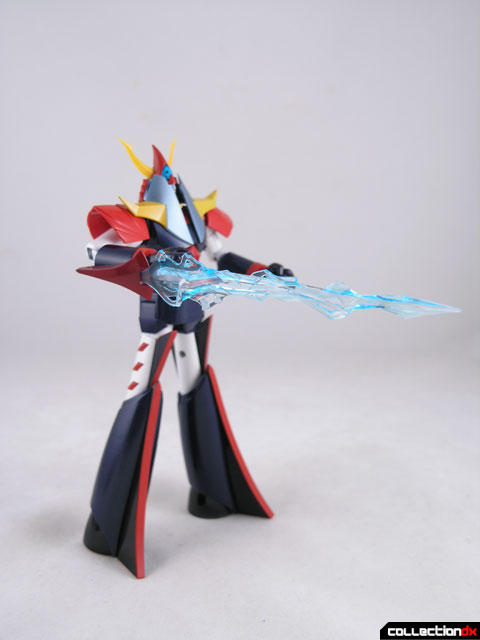 Head Cutter is a solid, non transforming head for the God Bird that has extra detailing in the back – this head is meant to “launch” at an enemy vehicle, although for the toy it just plugs in. It has better proportions (in my opinion) than the original head. 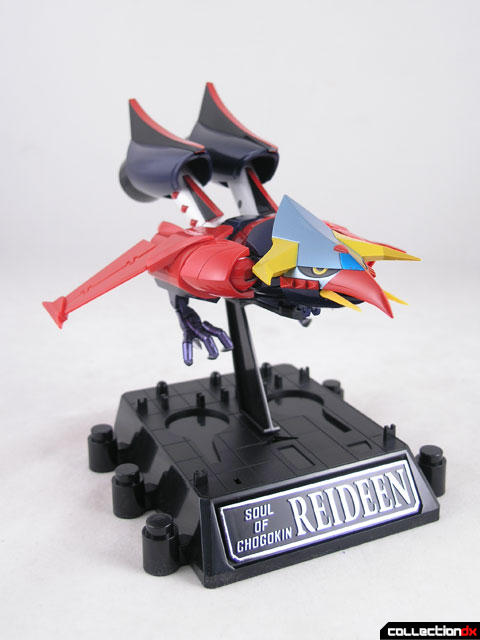 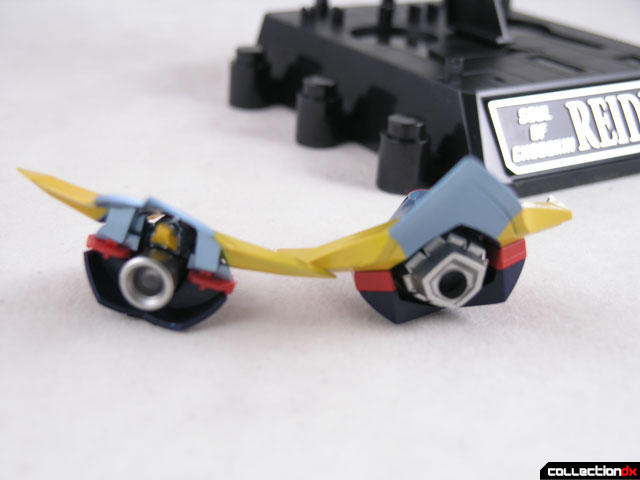 Body Cutter is a large blade that takes the place of the head of the God Bird. 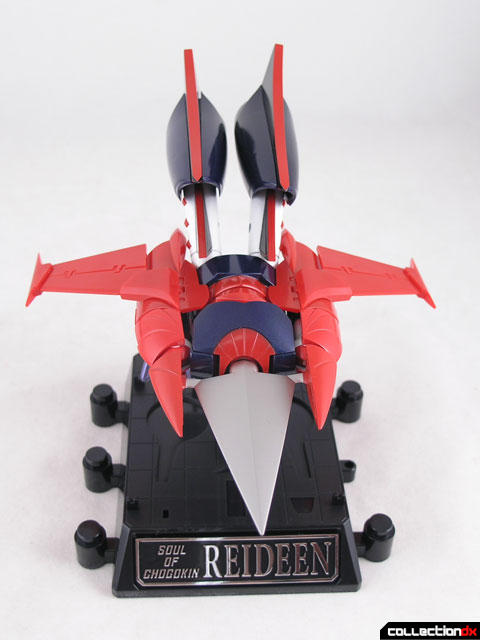 Probably the biggest reason one might get this set is for the included God Face Mountain. This mammoth monument holds a large golden statue of Raideen, which is revealed when you pull out a tab on the base. The head is solid plastic and requires some assembly. The stone statue is about 9 inches tall. 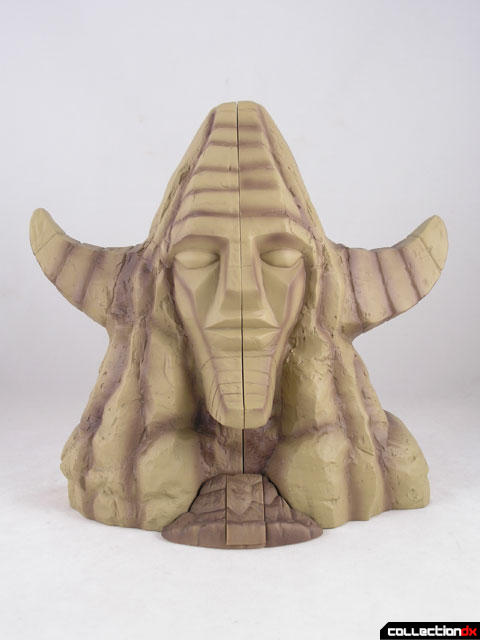 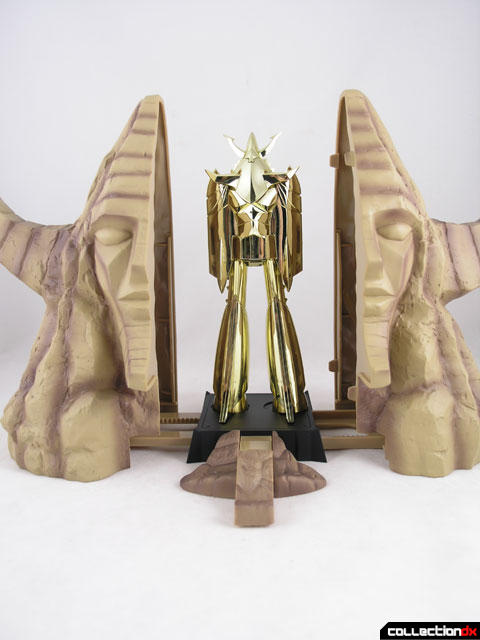 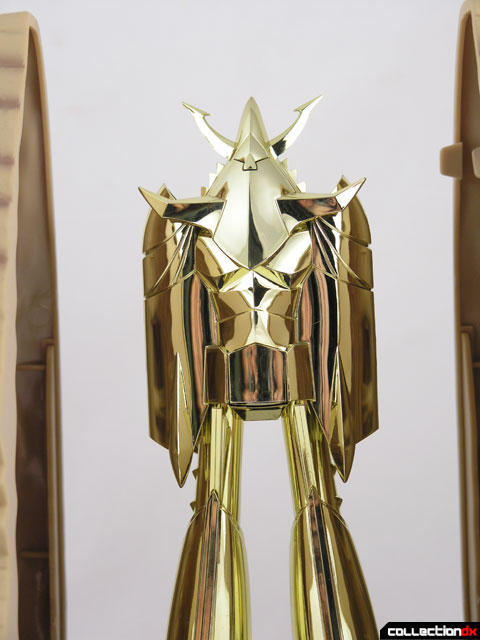 The Gold Raideen statue is a fixed-pose plastic statue. The only movable part is a small door in the waist that opens to accept the Sparker superbike. It is these accessories that allow one to re-enact Akira Hibiki’s “Fade In!” move when he wants to activate Raideen. 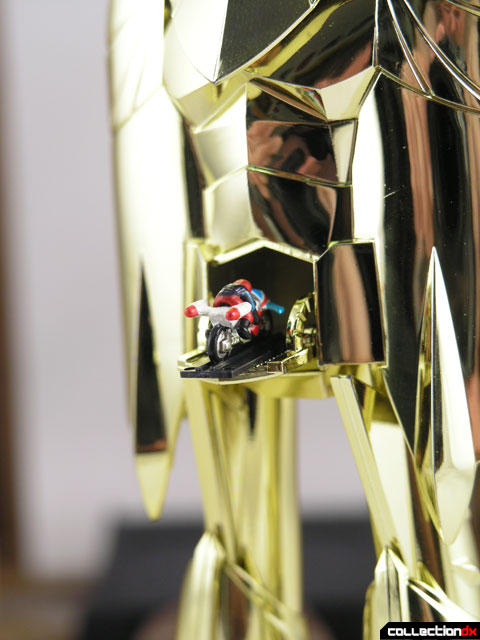 The Sparker (or Supercar) is a microscopic vinyl motorcycle that includes an even smaller Akira figure in riding position. This thing could ride an ant, it is so small. The cycle attaches to a black plate that can be stored in either the statue or on the display base. 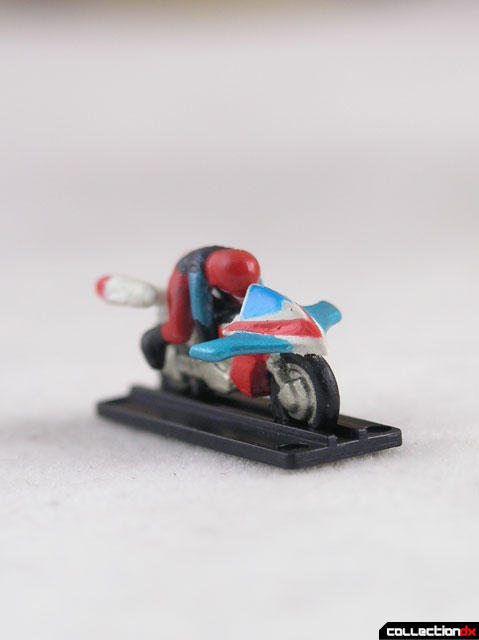 This leads me to my one gripe about this set – the base. While all the original accessories have a place on the base, the new accessories do not.

If I had the choice to get only one Raideen set, I would get the DX set. I just love the classic look of the white limbs, and the God Face Mountain is like getting a whole additional toy. 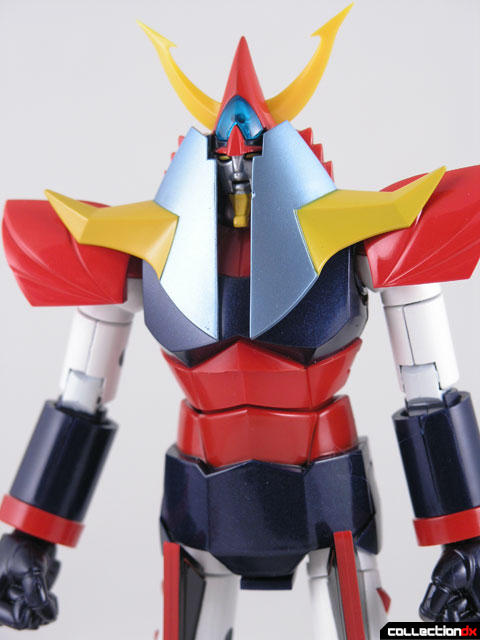 You can get your DX Raideen Fade in Set at BetaToys.com

14 comments posted
I can vouch for that..

I think the 'Sparker' could have been a single piece, not 3 microscopic parts. Cant see the reasoning behind this.

Also I think the 'God Face Mountain' should have been a replacement base for the normal one. Put a black box underneath it to house all the accessories, like gunbuster, do away with the Gold Reideen and put that hatch on the actual figure perhaps.. To each his own i spose.

Thanks for the mentioning about the bow with the folding arms in your STD set review.. I didnt even notice it.

I didnt like it at first and wished I'd just got the STD version, but the more I look at it the more I kinda like it. That 'God Face Mountain' is pretty cool.

Sweet! This set looks amazing. I am a sucker for toys with intricate bases, and/or playsets. I hope people buy a lot of these, as I am a huge fan of the playset figures and love it when Bandai makes them. During the mid - late 1990's I almost exclusively collected playsets and large scale vehicles, through which I (re)discovered the Godaikin line. I have to pass on this for the time being (i'm in the middle of intense down-sizing phase for space and clarity reasons) but i'm sure i'll be picking one up at some point in the next year or two. Thanks again as always Josh for the deluxe set review- both my eyes and wallet can stay happy and full this way.

While I like Bandai's black plastic bases, I really enjoy the larger, playset displays, like the Mazinger Base, the Gundam-model kit modular hanger sets, or the unnofficial Voltes V Base. They look great on the shelf, and really add a lot of value to these figures. I think Bandai would do themselves and fans a big service by making a few all-plastic playset/bases/stands for some of the other figures.

A perfect example of one that people would eat up would be a base for the GX-04S Grendizer Set. While it does look cool with its all black plastic base, I'd love a large opening "secret base" which could store all the accessories and the UFO, and open to "launch" like on the show.

The only turn-off to this set is that in the stone pyramid, there isn't a place for all the accessories to be stored. And that's very minor.

It's so cool that Bandai has finally answered fans pleas and released Raideen. With Daimos coming along, and all the other things coming down the line, SOC it seems is finally answering the thousands of fan requests in 2008, and not just with new robots, but the re-issue of some of their most popular figures. I hope that people buy this in droves, especially since all the forum chatter in several languages for years and years demanding a SOC Raideen- often people post demands for toys, and then when it's released, they skip out on actually buying it.

Dag, Cheers, Bandai! This Bud's for you.

I finally put a bid for my first SOC toy (but Lost).... I have always loved the SOC line and a sucker for numbered toys. They remind me so much of my Godaikin collection and they seem to release items that I like.

These last two reviews are great and it was great that you reviewed both versions of the toy so nothing was left uncovered.

I will never question your love for Raideen again!

oh man, are you missing out! The line is so much fun!!!

and what a great time to get into SOC- there's been a lot for sale for very cheap lately on ebay! Voltes and Grendizer especially (both were very expensive and hard to come by for quite some time but were re-issued and are currently pretty cheap!)

a few not to miss: Mazinger 01R, Great Mazinger 02R, Grendizer Spazer Set 04S, the Getters, Voltes V, Combattler, the T-21 robots (21 & Black Ox), Xabungle, Baikanfu... I could go on and on, but just click the Soul Of Chogokin category and you'll see.

The first group of figures I'm going for are the Mazinger related SOC figures. I knew it was bound to happen sooner or later so I better start now, why keep putting it off! Ha ha!

There are quite a few dealers at Frank & Sons that carry the line at very reasonable prices, and I think I'm going to pick one up tomorrow.

Actually what has held me up with purchasing them is sort of Ebay's fault. It was hard to determine what was a deal, market price or overpriced when you have dealers pulling of the whole Item is $25 and shipping is $49.00 so they won't get charged high ebay insert fees. I've kind of figured out what figures are worth what now and I'm looking for those deals now.

When your collecting addiction takes flight, just remember that, when OVA Getters are concerned, AOSHIMA is number one!!!

The only box that might beat it is GunBuster, but I'm pretty sure the DX Raideen is the biggest.

I've been waiting for this one since SoC started, it's been a long time coming, and although it's not perfect, it's a welcome addition to the line.

The gunbuster box is probably fatter as the DX box is about average width compared to godmars or ideon or something, but its at least 10cm taller, making it out of place with the rest of the big box SOC.

I wish i had more storage space..

So when are they coming out with Dangard Ace? One more,and I'll be done. What's Matsumoto-san's email address? I'll worry him to death! DA is one of my favorite super robots. Of course I have all of the 70's comics,which were pretty well done. I have the DX version of this. It looks good,but too fragile in the wrong places.

"The poodle is the Uncle Tom of the dog world."

This was probably my least favorite SOC to date. The way the arm parts fall off so easily cannot be stressed enough, imo. I would superglue them on, but I can honestly see myself selling this in the future and wouldn't want to effect it's value by doing that.

The single most annoying thing for me is though is that the golden Reideen doesn't fit in the mountain base like it should. Josh said his did, but this picture seems to suggest otherwise. See where his left foot is not lining up properly in the part of the base floor molded for it? You can't adjust his legs or feet to fix it either. That sort of thing enrages me. Why even bother to designate a spot where it's suppose to stand if it can't even stand in that spot?