If you need an introduction to Raideen, you probably shouldn’t be reading this site. He’s pretty much one of the first transforming robots, and one of the original batch of super robots from the 70s. He’s one of my favorite characters – you could say I have a slight Raideen obsession.

Since the dawn of the Soul of Chogokin line, I have wanted a SOC Raideen. I have always wondered how they would pull it off, and looked for clues in the other super robots released in the line to date.

Well, it is finally here. It’s a good toy, but somehow I think i was hoping for something different. I guess that can’t be helped when you wait for something for so long. 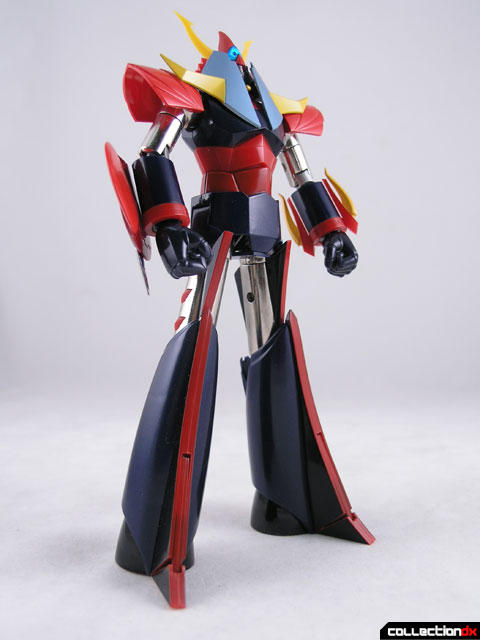 The GX-41 Soul of Chogokin Raideen the Brave was released in two versions. In this review we are talking about the standard set, but there is also a GX-41S DX Raideen Fade-in Set that I will be reviewing separately. Both sets are available at BetaToys.com. 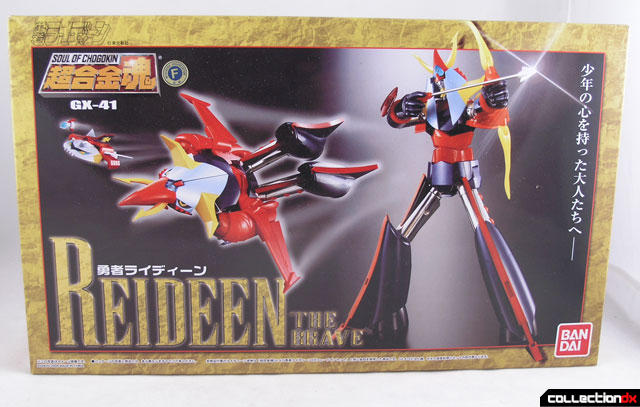 The packaging was kind of sub-par in my opinion. I don’t much care for the gold-theme packaging, and I was hoping for a return to retro look after the awesome Godmars box. Inside the box you will find the body of Raideen in a Styrofoam tray, while the rest of the accessories are in clear molded plastic trays. Also included is a nice color manual that has some history about the evolution of the character, should you be able to read Japanese. 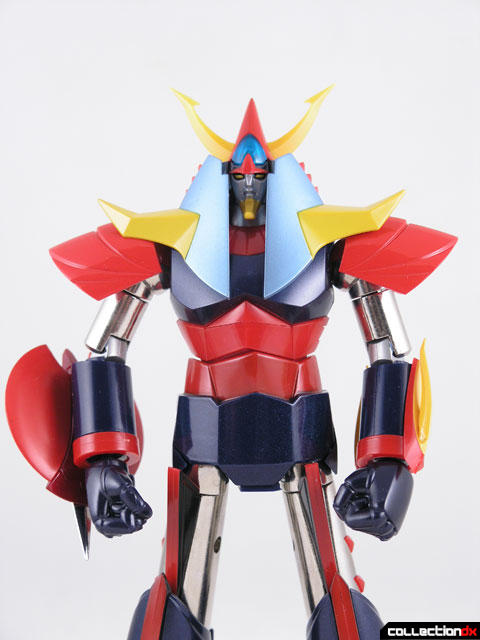 One good thing is that there isn’t much assembly required to get Raideen ready to play. You just need to attach the head, fists, and what we will call the leg guards. There are two different sets of leg guards to choose from, but we will get into that later. 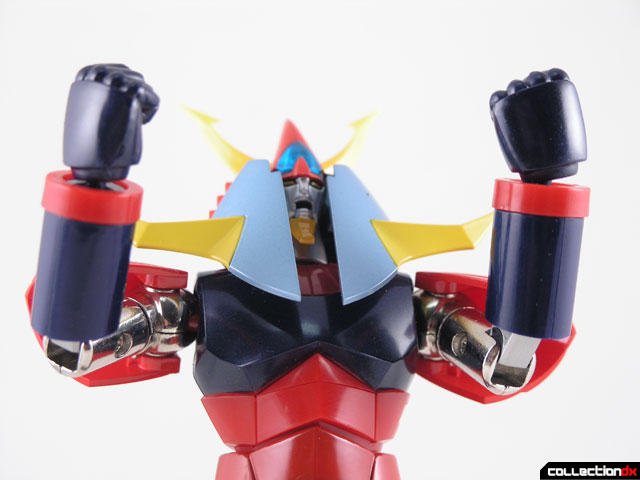 The Raideen figure itself, sans accessories, is really nice. The head features moveable panels that close in bird mode, as well as moveable yellow horns. The face can be replaced with an angrier face that has a moveable mouth. Getting the faces swapped can be tough if you have fat fingers – just move the side panels out as far as you can to get in there. They go out farther than you think. Head articulation is not great, but that’s more of a limitation of the character than anything. You can pull the neck up a little to get a wider range of motion.

The shoulders are metal, and have nice solid joints. The shoulder pads are plastic and just clip into the shoulders, so they can pop off during transformation. The arms are metal down to the elbow, and then at the end the fists can pop onto a peg at the end. The lower arm can slide up over the elbow for transformation, but can also dislocate and come off if twisted in an odd angle. 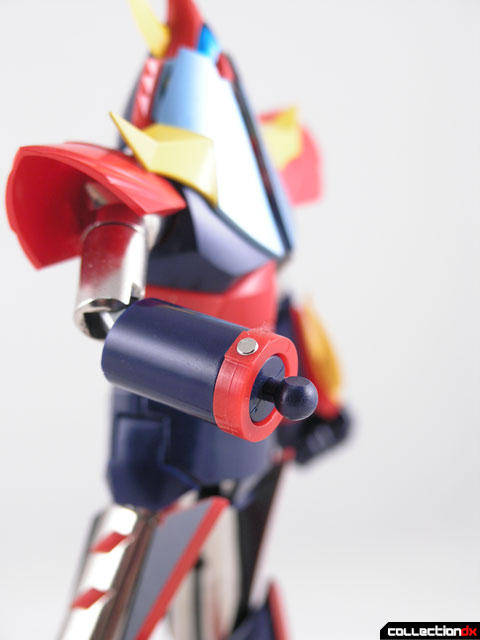 Raideen has a waist joint in the middle of the red area of the torso. It’s an interesting joint because you actually have to pull it up before rotating it. You do end up getting a small amount of tilting motion here as well. The top of the torso features a missile firing gimmick at the peak of the red area. Press the panel on the left side of the torso to launch the center portion, and then replace it with a bird missile or other accessory, such as the “God Voice” assembly. 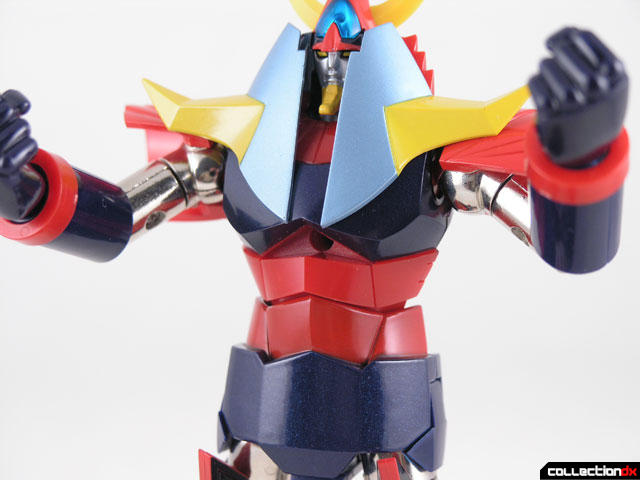 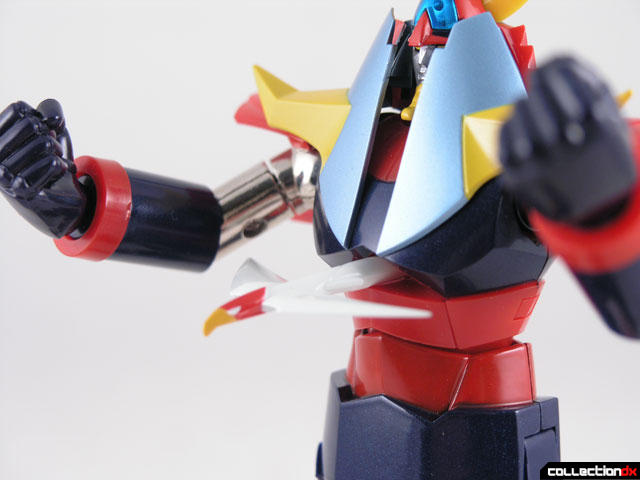 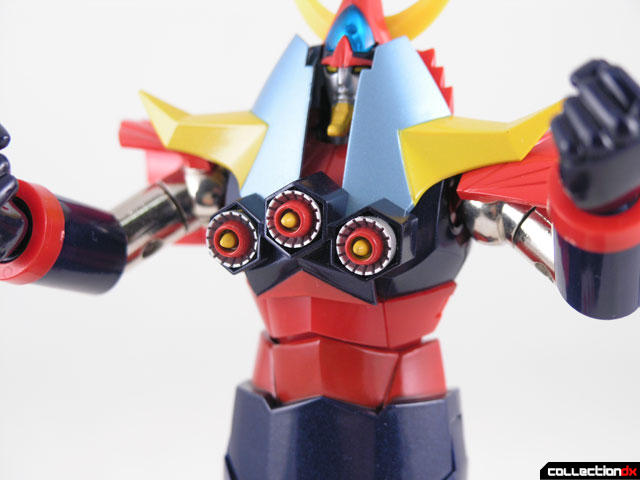 The legs attach at the hips with nice solid chrome joints, and feature a pull down connector to enable transformation into bird mode. The legs have inset red diamonds made out of plastic – not painted. The knees are nice and clicky and the lower legs offer collapsible panels in the back to allow for transformation. The front leg guards can be swapped between solid guards and ones with extendable toe sections. 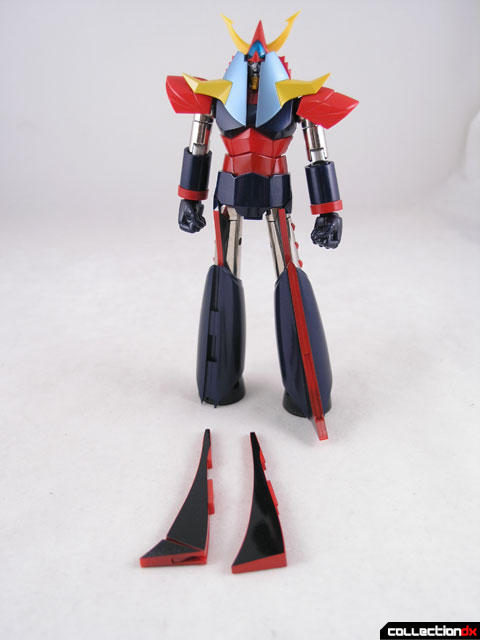 Finally, the feet jets are diecast metal, and are hinged on a ball joint.

Raideen comes with a ton of accessories, some good, some not so good. The main problem areas are any accessory that needs to be attached to the arms.

To swap out an arm accessory, it is necessary to remove the fist, then the red ring around the wrist. Each arm accessory comes with its own ring to secure it to the arm. The thing is, each ring is only held on by a tiny peg (or in one case, a magnet). The things just do not stay on. Medicom made the same mistake years ago on their Miracle Action Figure version. Why aren’t these solid pieces, or more sturdy? This is just plain lazy on Bandai’s part. This really only applies to the shield items – the bow arm attachments for the other arm are much sturdier.

On the right arm, you have your choice of three accessories:

God Block is the round shield, and you can replace the tip with either a long or short spike 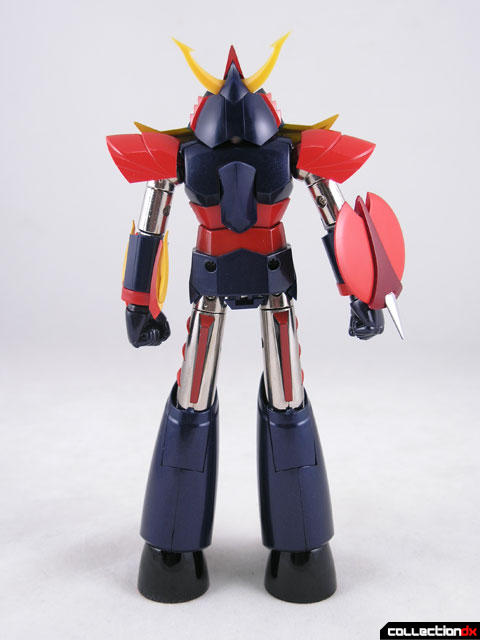 God Breaker is the slim red part with the long spike on the end. 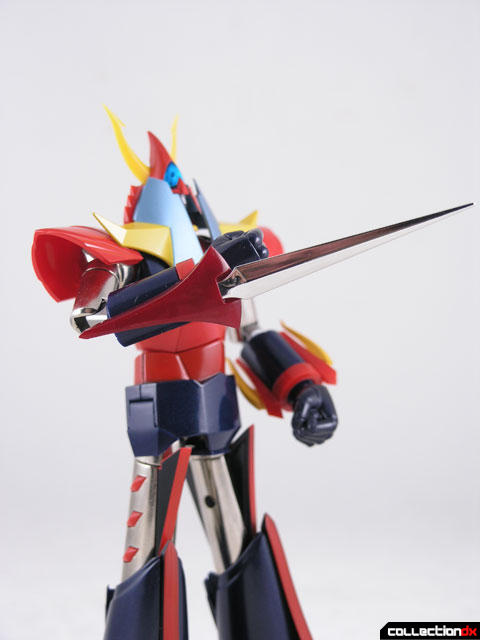 God Boomerang is actually attached by a magnet, and is meant to be grabbed by one of the extra hands. The sides of the weapon can be opened to give it a boomerang look. 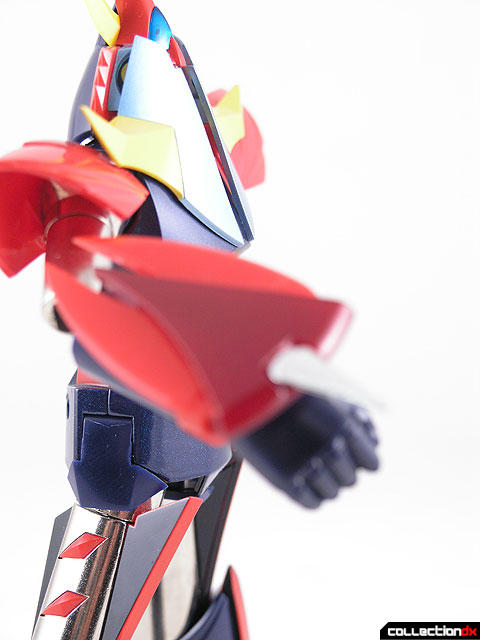 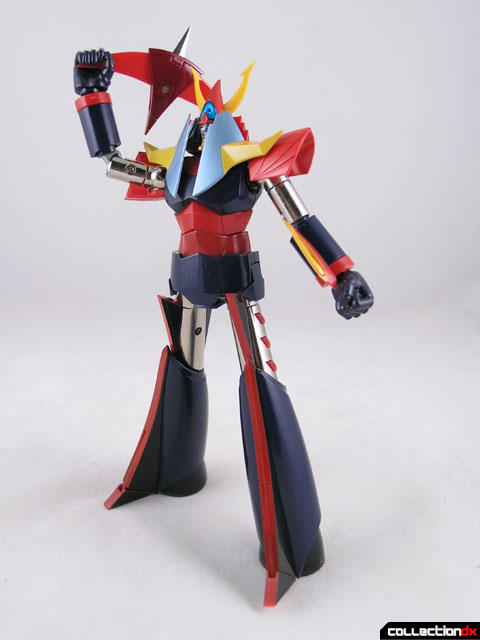 On the left arm, you have the option of the small closed bow, or the large articulated bow. This bow is hinged at the handle, and the sections can slide forward and backward. Using the variant pointing hands, Raideen can hold the God Gogun arrows as if preparing to fire. There are two different arrows, each with a metal shaft. 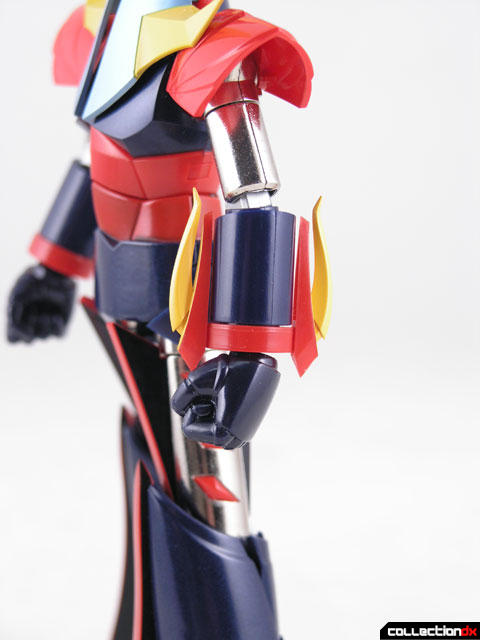 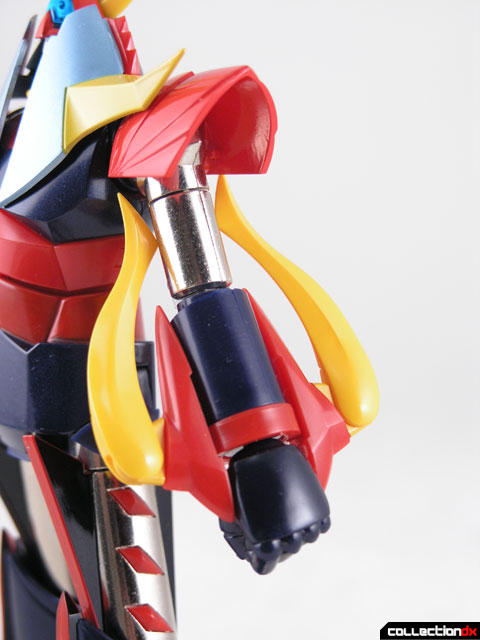 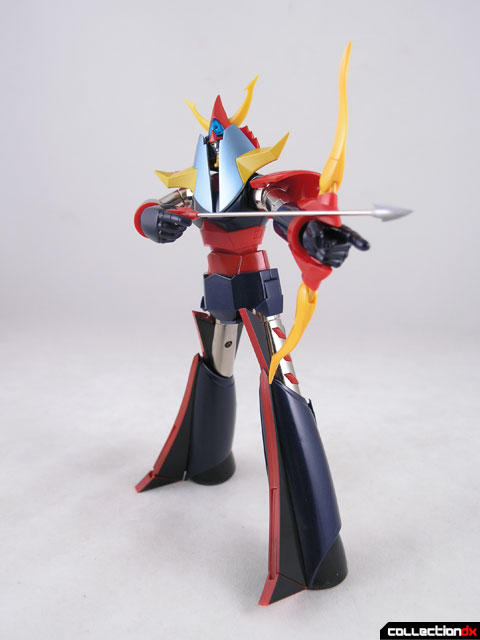 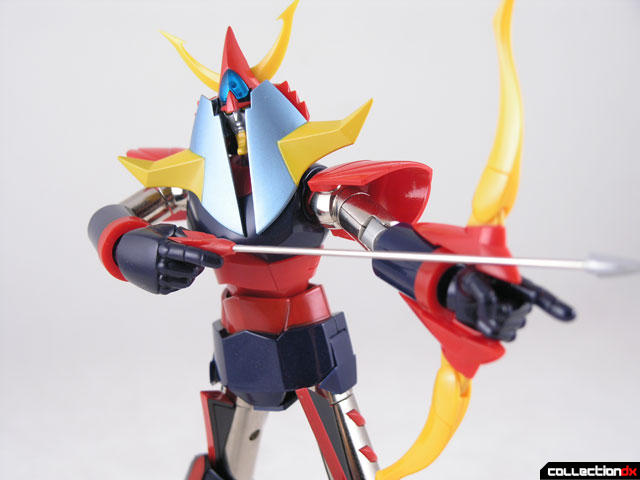 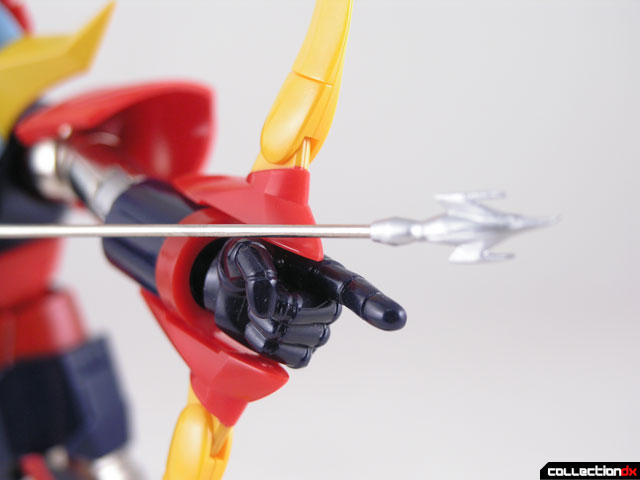 Transformation from Raideen to God Bird is not perfect, but I don’t think it ever will be. Included with the set is a separate wing assembly that plugs into the figures back once a panel is removed. The wings are folded up in an intricate origami pattern. You can display the figure with wings on, but it looks odd. 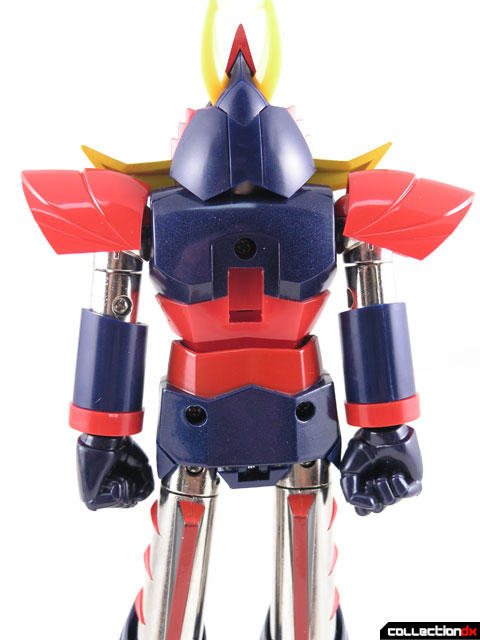 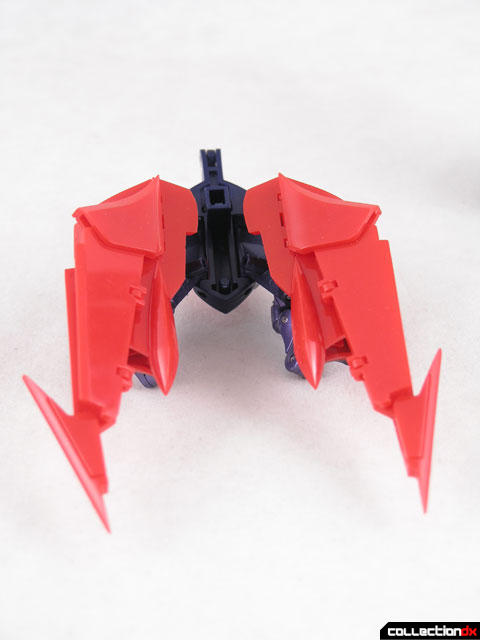 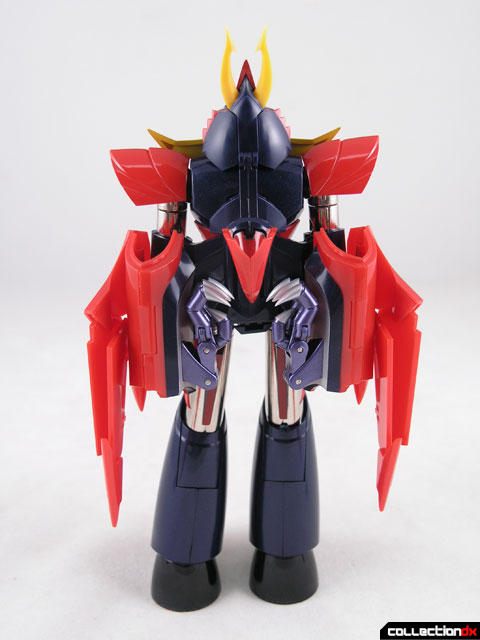 To begin the transformation, close the head panels, and push up the lower arms. Bend both legs up so that the bar in the waist comes out, and bend down and collapse the legs. 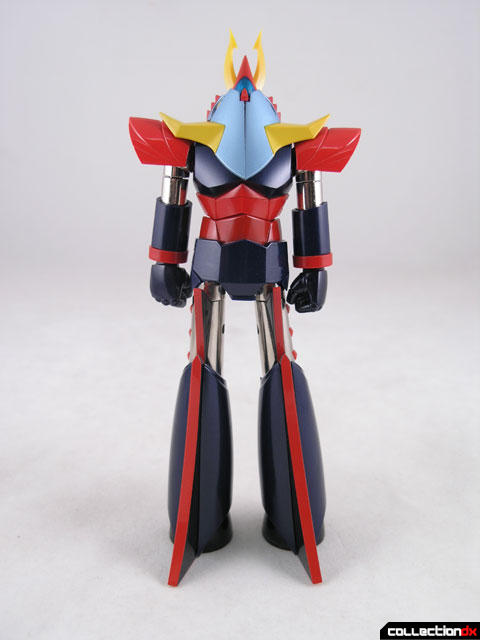 Fold out the wing assemblies around the arms so that they are covered, and then turn down the shoulder pads. This area can be a bit fidgety, and once you get one section in place it seems another pops off. This action would have benefited from some clips or something, but I fear Bandai is more concerned with accuracy than playability. 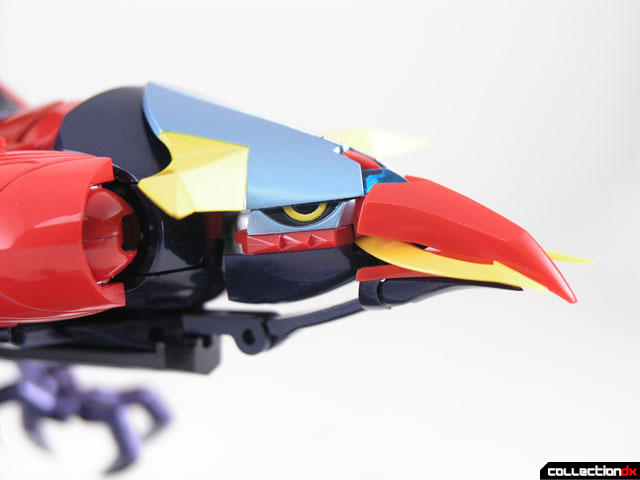 On the back of the figure, swing out the beak assembly and place over the tip of the head of the figure, then pull the head out so it fits snugly in the beak. Finally, push the upper horns in, and then unfold the bird claws below the figure. 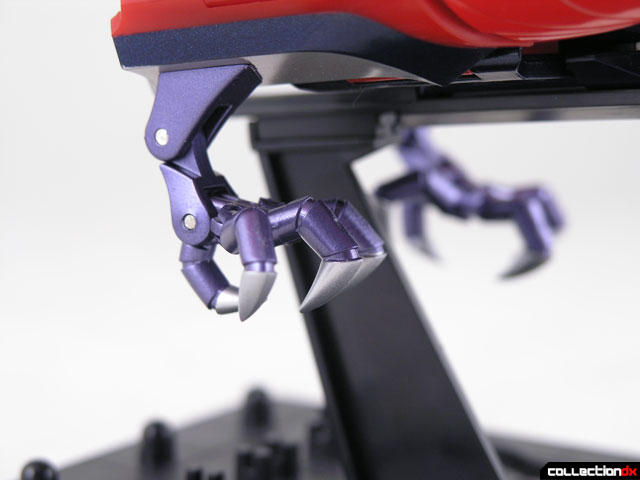 Bird mode looks great. Once you get it together, it looks pretty solid. It can’t stand on its own in this mode so there is a panel that attaches to the underside that can slide into an extra part of the stand. Be careful though, there is a small blue tab where the front of the panel connects to Raideen – I broke mine off. It doesn’t effect anything, but still….. 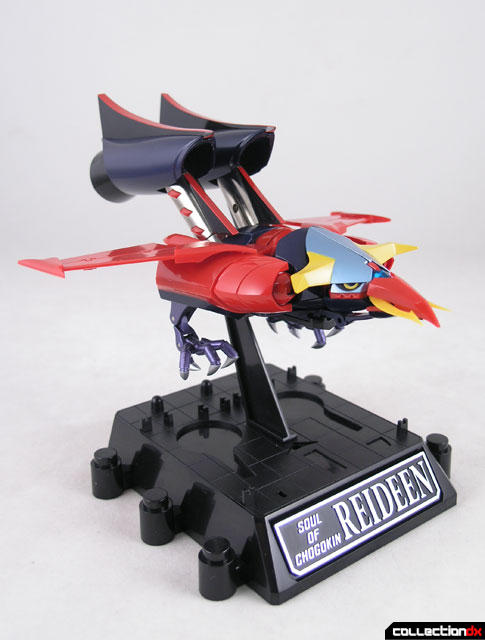 For such a complex SOC, the base is very simple. The underside of the base has storage for the leg guards that are secured in place by a bracket. The top side has spaces for the 5 arm attachments, 3 extra hands, 2 arrows, missile, extra face, and Brugar (or Blugar, Broogar whatever) 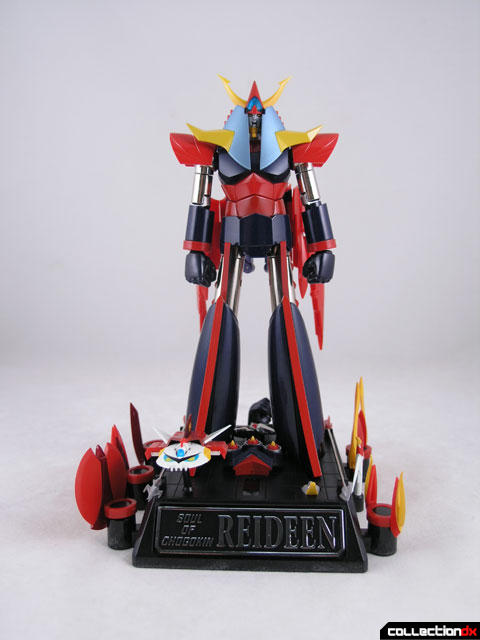 The Brugar is a small plastic ship that has wing sections that tilt down and has a removable spit fighter. 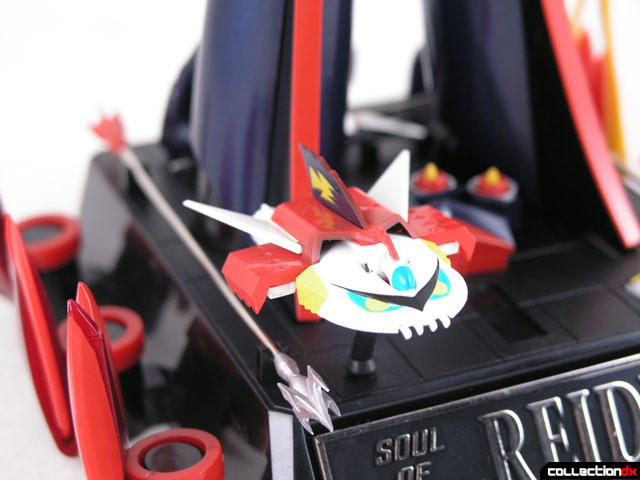 Raideen can stand on the base in robot mode, or in God Bird Mode. There is no place to store the wing assembly on the base so you have to display it on the figure or in the box. 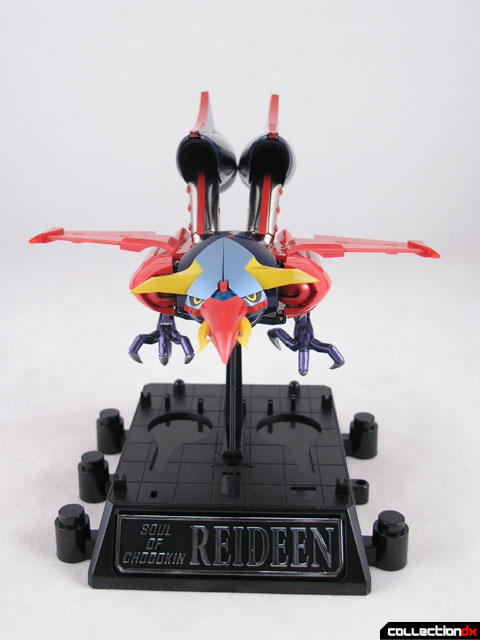 When I first handled Raideen, I will admit that I was a little disappointed. However, The toy has grown on me a lot since then, and I especially love the DX set, which I will review next. Both sets are available at Betatoys.com, so if you like what you see, order one before they are gone. 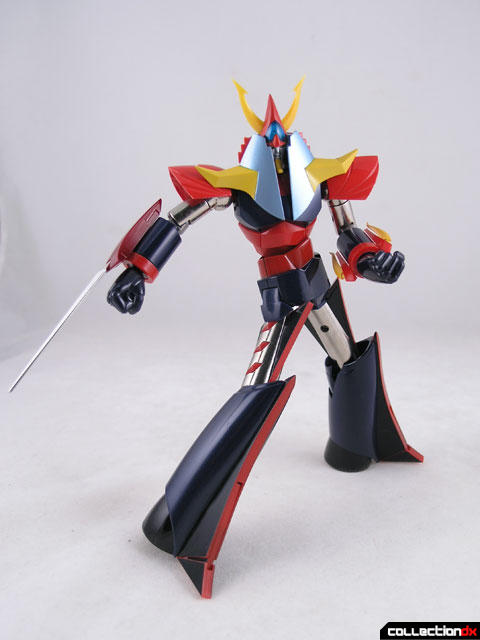 7 comments posted
I appreciate you forgoing

I appreciate you forgoing your health to bring us a sweet toy review, and I'm far more interested in this than I initially was. This actually makes me wonder how a "New" Reideen SoC would play out.

A very nice toy indeed! And one more cool thing - its hips (blue portion on each side)can open up to enable Reideen to do some awesome poses which requires it to split its legs wide apart. Truly worth the wait for me.

actually there are two pegs on the wing.
the pegs go into two holes on the hip, so it won't move so much when it's transformed.
also, when the shoulder armors don't fit over the wing part properly, try moving the shoulder.
the shoulders have extra joints(?) other than clicky joint, the shoulders can go in and out little bit,
and go up and down.

Reideen is one of my favotite Super Robots, so I was hoping for something "better" from Bandai's SOC rendition. The first thing that got me was Reideen's size: It is tiny! Bandai should have made it at least the same size as the SOC Combattler or Voltes V.

Second, did anyone at Bandai inspect the final revision of this figure before it was sent in for production? If they did, what were they thinking!??? The accessories pop off like if they were being held together with spit. All it takes is one tiny bump on the shelf and the magnetic stuff drops off from the arm... terrible QC Bandai!!!

And last, where did the diecast go!?? I already have a nice looking "plastic" Reideen (from Medicom), all I wanted a nice looking diecast one from Bandai's Soul of Chogokin line. Okay, okay, I understand the figure can't be too heavy in order to be able to maintain its God Bird mode... but come on! If you are going to charge about $80 for an SOC figure ($150 for the "S" version), at least make sure it has a little bit more diecast in it. Hell, make the Face Shield and/or the Leg Guards out of diecast at least. Geez...

If I did not like Reideen so much, this SOC rendition would be up for sale already.

if you could afford only one version which would it be? do you think it is worth it to purchase the 41s, are the extra accesories cool, it alreay seems to have so many...

I've been waiting for this review for ages!!!
CDX is the only site I trust when it comes to SOC.

I can't believe the toy has been a bit of a disappointment.

I don't own it yet, but from pics I'd put it in the same league as gx-04, 02 and so on: perfect renditions of classic suparoboz, with tons of accessories.

It kinda surprised me to read a less than enthusiastic review. Hmmm... I'll have to think about it...