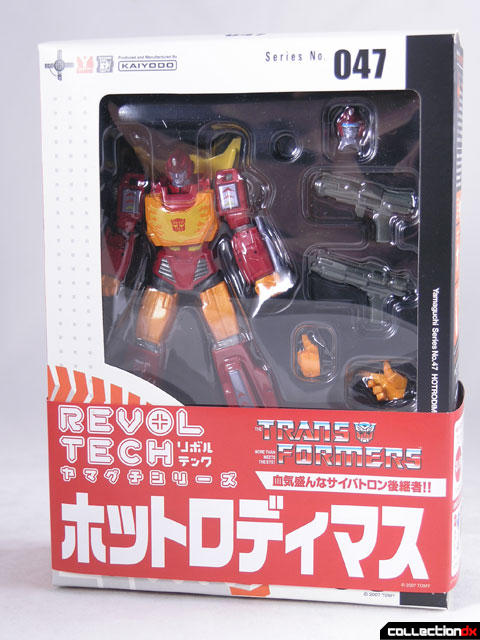 Hot Rodimus was better known as "Hot Rod" in the US. Hot Rod was introduced in the 1986 Transformers Movie as the Transformer who inherited the Matrix of Leadership from Optimus Prime. After the movie he was hardly seen again, but he remains a popular character in Transfromers Fandom.
Hot Rodimus is available at HobbyLink Japan 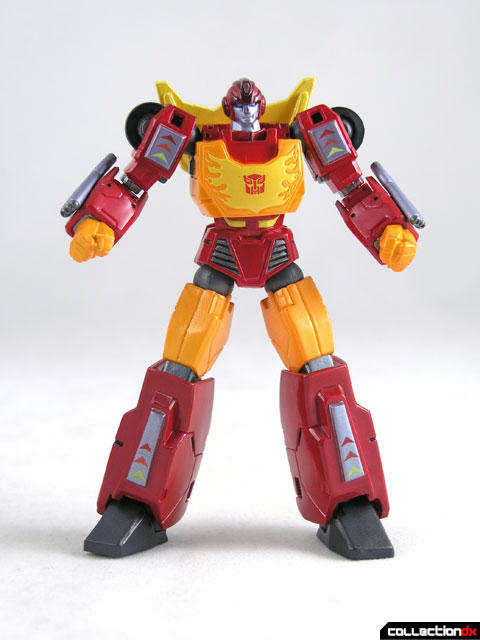 The choice to make a Revoltech figure out of him is an interesting one. There are so many more popular Transformers characters than him, but his design really lends itself to Revoltech form. 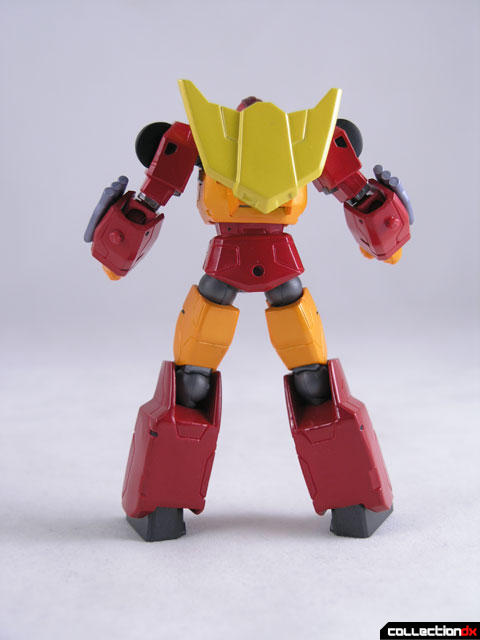 Rodimus is as close to a true "Action Figure" as the Revoltech line has gotten so far. The figure is so playable and sturdy, you forget its from the Transformers. And no, Hot Rodiumus does NOT Transform. 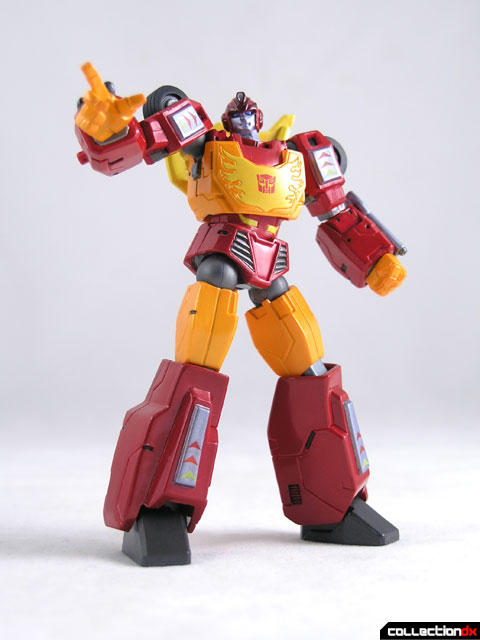 Hot Rodimus comes with 2 weapons, 4 variant hands, and a display stand. The stand is the same as all Revoltech stands with the exception of "Tomy" printed in white on the bottom. The stand can attach to the rear of Hot Rodimus for some cool poses. 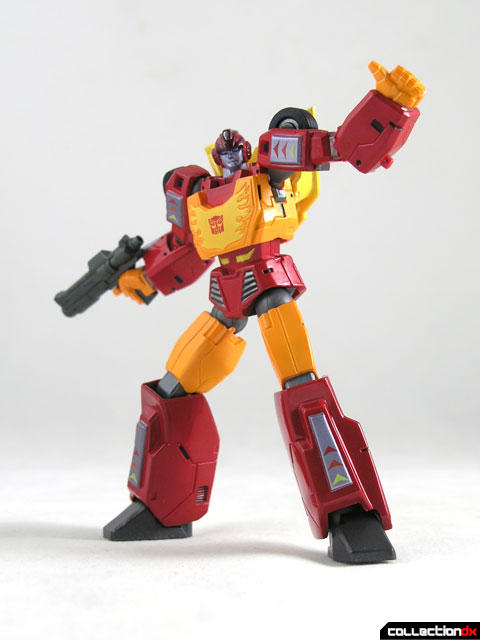 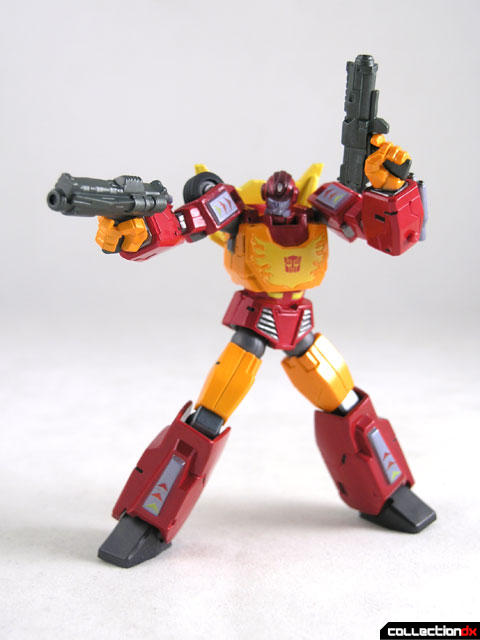 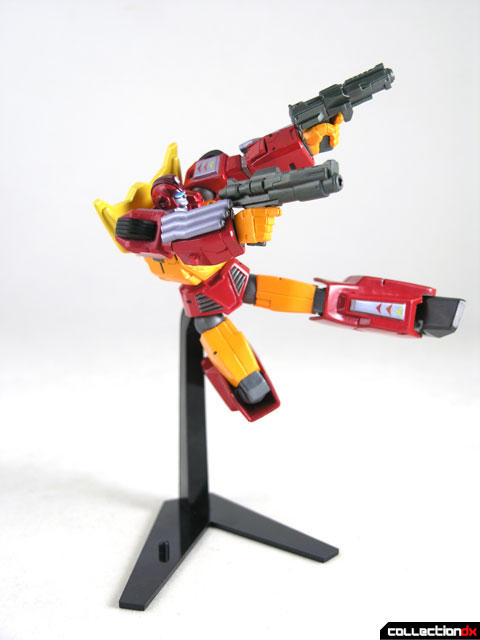 A variant head with the visor down is also included. The joint fit is tight here, and its a pain to get the variant head on due to the post moving on the Revoltech Joint. 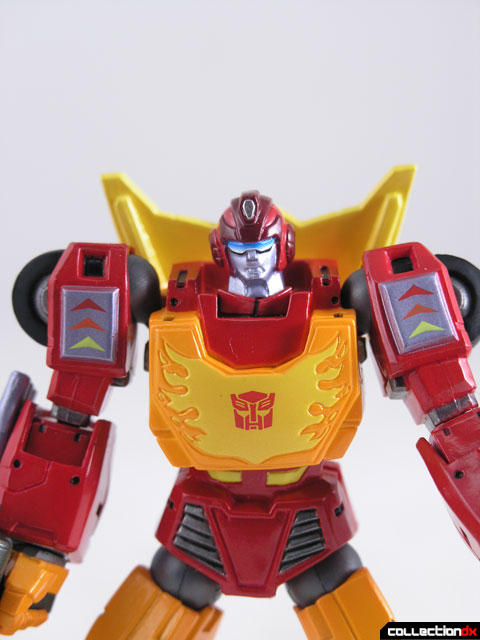 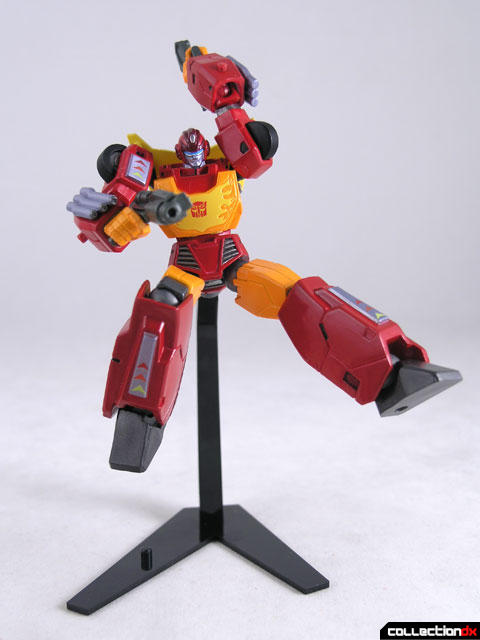 6 comments posted
love the look of these toys

love the look of these toys I only wish the transforming toys had such cool hip and body joints but I guess thats not going to happen for some time. also if I did get this I would be very tempted to make a custom FireBolt so I could have a Target Master edition as well... saying that i could very well expect to see one coming from this line looking at what they have done with past figures.

I do think that HR is popular he gets quite a few Homages theirs are least 1 in every new show that comes out of Japan and then theirs the Kiss Play Hotrod GT40. I'm not sure why he is so popular as Hotrod he only shown up near the end of season 3 and then in head masters. so i guess Rodimus prime/hot rod stuck a cord in Japan

Wasn't he the leader for an entire season of the TV after the movie?

I think he means that he wasn't seen in "Hot Rod" form. After he opened the Matrix in the movie he turned into Rodimus Prime, which changed him from a futuristic sports car to a futuristic Winnebago. He got taller and got wrinkles.

I want this. I want this SO HARD. Hot Rod is my favorite G1 cartoon character. (Blaster is better in the comics, and Tigatron is my fave in Beast Wars.)

Just got Starscream in the mail today. he looks great along with Megatron fighting this one!!

I will be buying this at Otakon.