Ok, so it’s not the masterpiece Megatron, but it is pretty damn cool.

Like a lightning bolt from HobbyLink Japan to my front door, Megatron has arrived! While my Masterpiece Megatron hasn’t arrived yet, this much smaller Megatron makes the waiting a little easier. 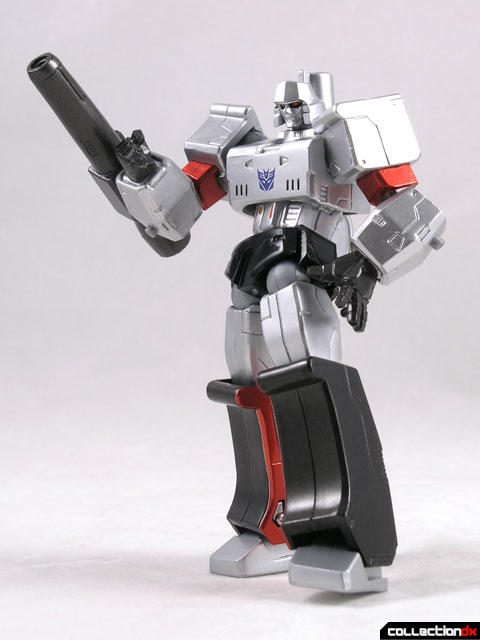 Megatron is the 25th release in Kaiyodo and Organic’s Revoltech series of fully poseable action figures. Each figure uses the Revoltech Joint System to achieve previously unheard of levels of articulation. 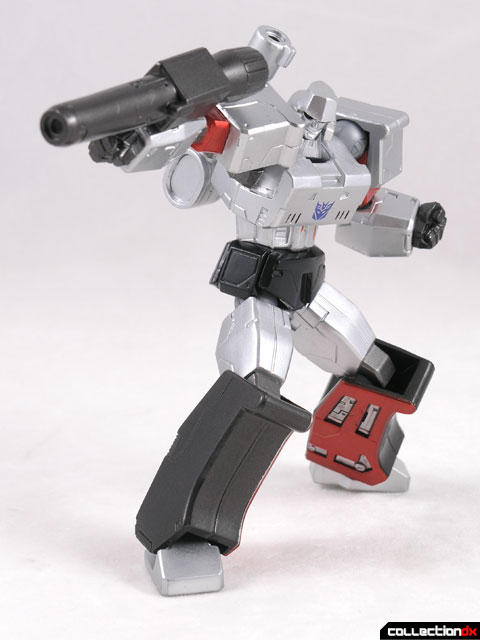 Although this Megatron doesn’t transform, it replicates the appearance of the character in the animation and comics.

The Decepticon commander (Destron, if you are Japanese) is armed with his signature arm cannon, ready to take on Optimus Prime and his Autobots. Megatron has 13 Revoltech joints that enables you to pose him in any fashion. In total is comprised of 37 parts and stands 120mm (4.75 inches) tall. 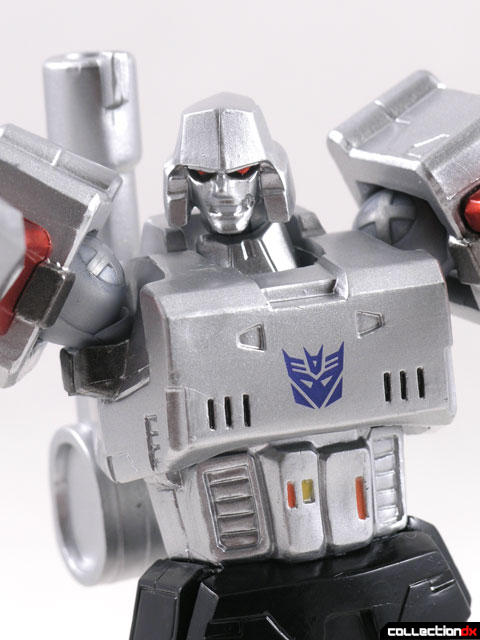 Megatron only comes with a few accessories. A variant head is included that has more of a snarl than the normal face, but it’s not terribly different. Trying to get the second head on was a pain due to the tight fit of the joint and the constantly moving Revoltech neck. In addition to the head, Megatron also comes with 3 extra hands. Two of the hands are wide open, but the third is a hand designed to hold a gun. Apparently this hand is used to hold Convoy’s gun. ( I think that is what it says here: http://www.kaiyodo.co.jp/kaiyodo_HB/TK_topics/organic/re_1st/megatron/megatron.html) 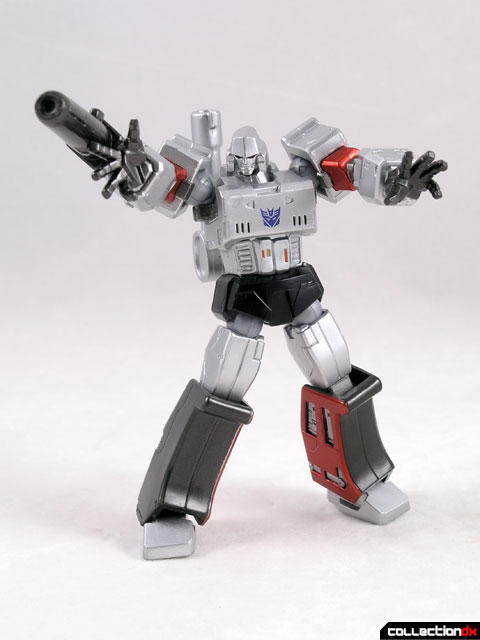 The thing that impresses me most about Revoltech Megatron is the awesome metallic finish. Just check out the deep metallic red paint on the inside of the legs – it’s absolutely gorgeous. 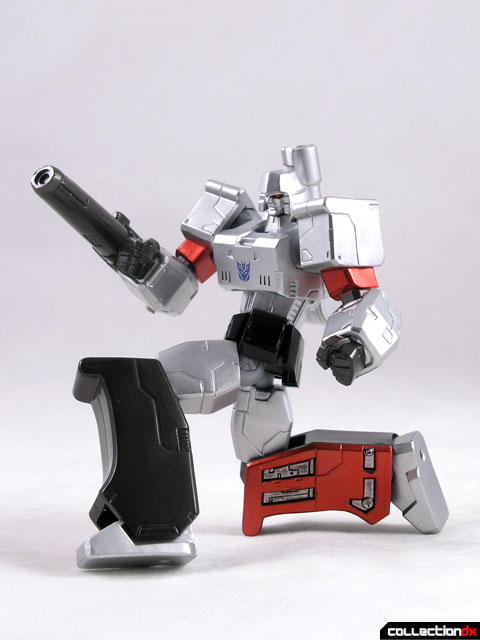 Revoltech Megatron was released in Japan on Sunday April 15, 2007 and is available now through HobbyLink Japan. 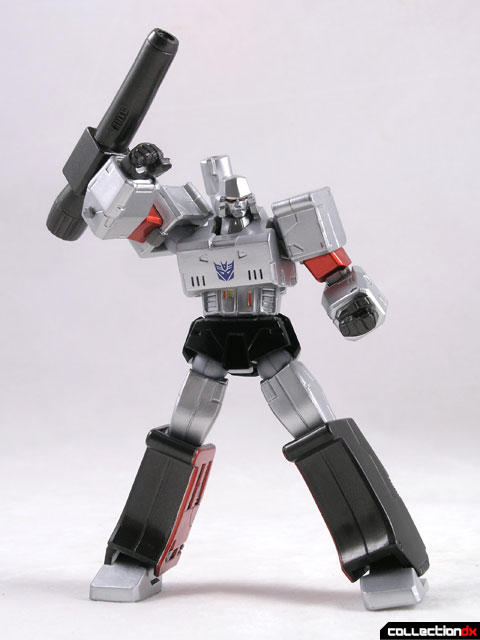 I like it. I've never seen a transforming Megatron that looked as killer as the cartoon version. Thus, I've never been interested in Megatron. This figure changes all that.

Anyway, transforming into a gun that shrinks down to be held by Starscream isn't the coolest. I'd never transform if that was all I could do, especially when my scope/arm-cannon is plenty powerful. amiright?!

I think I still like the classic G1 Megatron better, for purely nostalgic reasons.

Looks really awesome. Yeah, MP Megatron is an engineering marvel, but this is loaded with comic style goodness.

I have 20 of the Revoltech series figures, and Pat Lee's Megatron was my favorite until Saber arrived at my door. Still, he's incredibly put together.

I got a Revoltech Megatron figure and really liked it. I'd still like it, but it broke. After falling off the 2nd shelf of my computer desk onto the 1st shelf (a fall of about 13 inches) the plastic plug that joins the left leg into the hip broke off. Normally, the arms/legs etc that have such joints can be pulled loose harmlessly (more or less) out of the socket and put back in. But in this case, the plug that connects to the joint snapped, leaving the very end of the plug imbedded in the left leg socket of the hip while the rest is still connected to the ball socket.

There was one point in time at which I said I would probably never pick up the Revoltech Megatron. But I got it in the mail yesterday (along with the Ingram 1 movie version) and I've hardly been able to put this thing down. I've always loved Transformers, the metallic paint, as stated above, is wonderful to look at...plus it's the first figure I've owned that actually has Revolver-joint hips (such a relief!), and that's special to me, ha.

I'm so getting this one!

BEST MEGATRON FIGURE EVER HANDS DOWN!!!

This Revoltech Megatron is perfect to pose with my Takara Robot masters Convoy.... about the same size. Plus Robot Masters doesn't have a decent megatron.... And Megatron Doesn't have to transform!!

"And Megatron Doesn't have to transform!!"

Oh really? If the mighty Destron/Decepticon Leader doesn't have to transform, then what good are your TF collection worth to your time and effort if you dismiss the contextual nature of this iconic villain?

Has this postmodern hyper-culture made you forget why amazing robots like Megatron are literally called 'THE TRANSFORMERS' in the first place?

They're LESS THAN MEETS THE EYE.

If this guy were campaigning to have ALL Transformers toys be non-transforming, that would be ludicrous and horrible.

But I don't think he's suggesting anything like that. I think he's just enjoying a figure. Is that alright?

"I think he's just enjoying a figure. Is that alright?"

The answer to your question is YES

If he enjoys the toy, then it's his free will to do so.

After all...freedom is the right of all sentient beings.

If my answer to your question were NO,

Then that would've been ludicrous and horrible.

I do desire peace & flying on Earth, but not through tyranny.