Fresh off the boat from HLJ is the Revoltech Mazinkaiser! 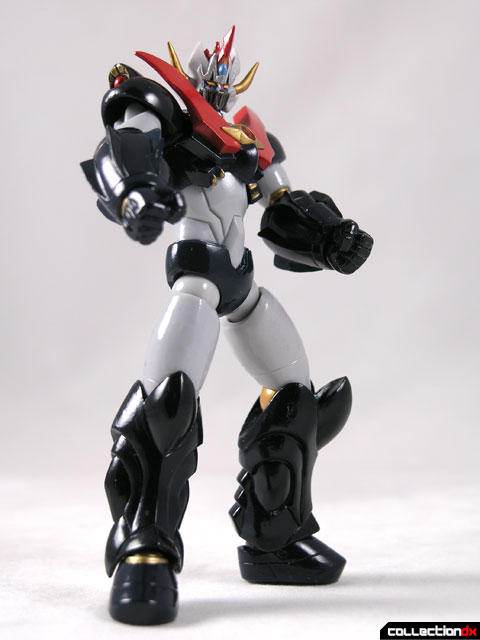 Mazinkaiser comes from the 1999 OVA series of the same name. 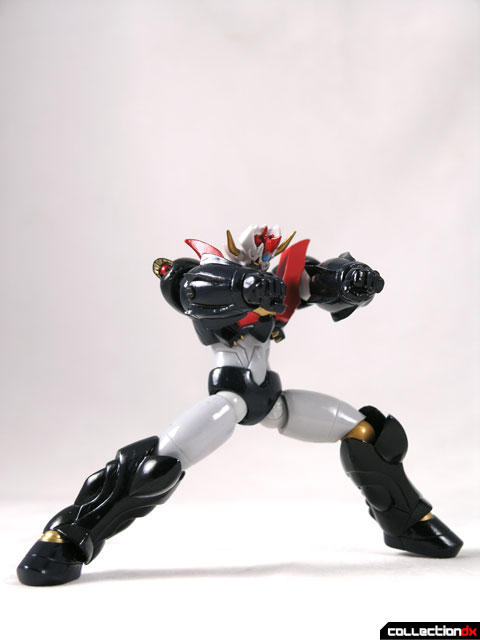 The basic plot is a re-telling of the adventures of Kouji Kabuto, pilot of the mighty Mazinger Z, the first Super Robot of anime, defender of Japan and of the Photon Energy research laboratory. He is joined by another hero, Tetsuya Tsurugi, in his Great Mazinger, along with token girls Sayaka Yumi and Jun Hono in their female robots Aphrodite A and Venus Ace, and comic-relief Boss and his Boss Borot. They all fight against the evil machines of Dr. Hell and his assistant, the half-man, half-woman servant Baron Ashura. This time around, however, Ashura forms an army of machines powerful enough to defeat both Kouji and Tetsuya, and is able to capture Mazinger and do severe damage to Great Mazinger.

While Ashura and Dr. Hell plot the final attack to the Photon Laboratory, Kouji, who is missing after the battle, finds a hidden laboratory of his dead grandfather, Juuzou Kabuto. There he finds a hologram of his grandfather that tells him that the time has come to unleash the most powerful robot ever created: Mazinkaiser, so terribly powerful it can as easily be used as a lethal weapon of evil as it can be for good ("Mazinger Z gives you the power to be God or the Devil, but Mazinkaiser allows you to surpass both!"). Kouji, now piloting Mazinkaiser, arrives just as Ashura is almost on the verge of destroying the Photon lab, and defeats him. Ashura leaves, stunned and hardly believing that a new Mazinger has arrived. In the seven episodes serie, Kouji, Tetsuya and their allies fight and finally defeat the forces of Dr. Hell. 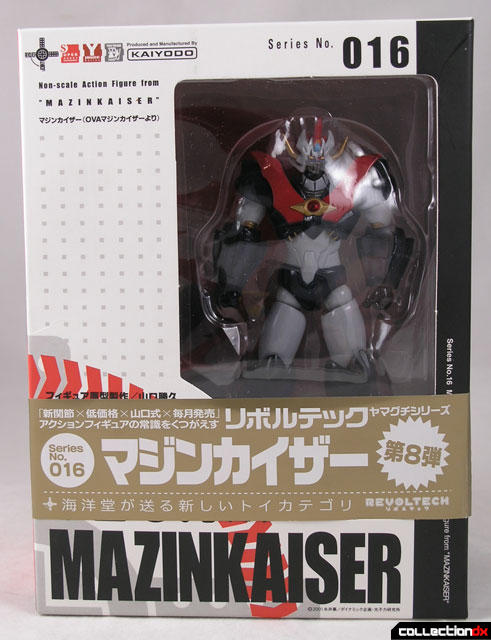 Mazinkaiser is number 16 in the Revoltech series from Kaiyodo, distributed by Organic Hobby. It’s the first affordable action figure of Mazinkaiser. Up until now, most toys of Mazinkaiser have been expensive gokin toys from Aoshima and Max Factory. 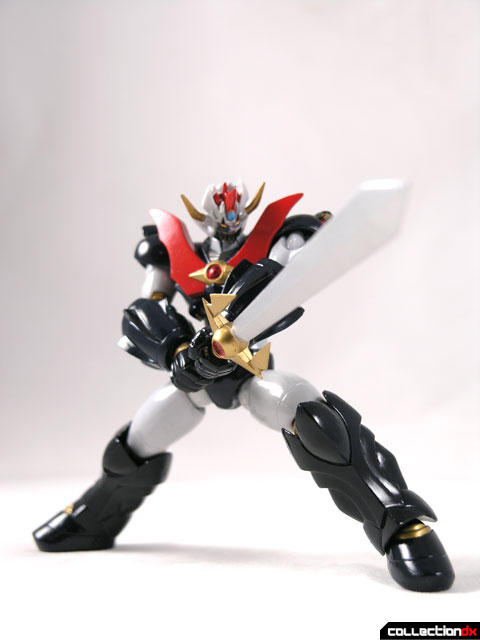 The paint and detail on this figure is really nice, but the grey seems odd to me. I am used to the metallic look of the gokin toys, but if you look at the anime, the color is correct. 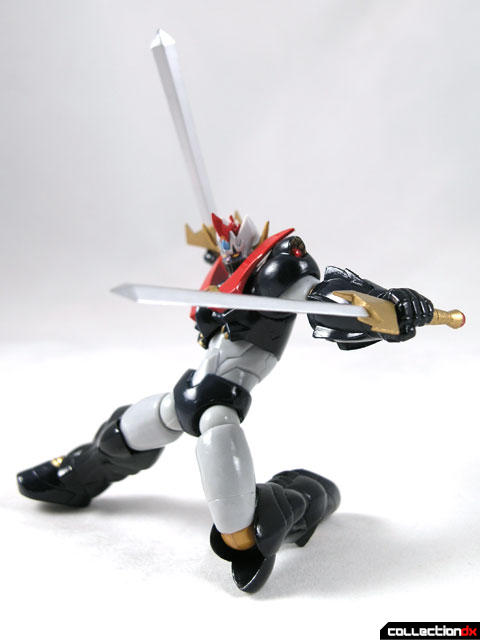 The two Kiaser Blades are made out of hard plastic and are shorter than the Final Kaiser blade. The Final Kaiser Blade is longer, and the handle is long enough to be held by both hands. 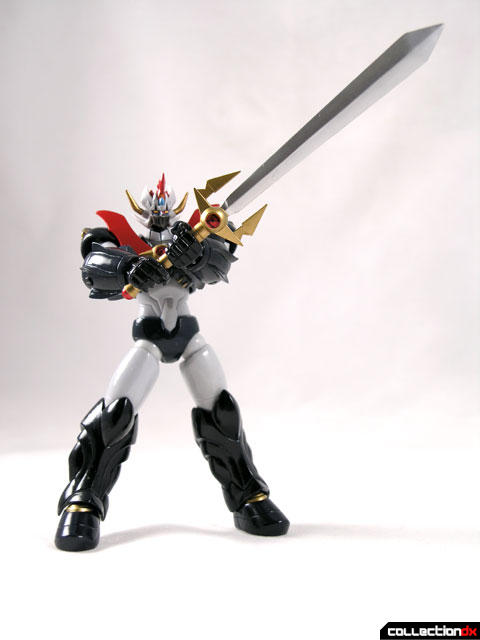 Hands are swappable and have yet another new kind of hand attachment mechanism. These hands have the pegs on them, instead of on the arm, and the pegs have a little nub at the end so they “pop” in and out. They are easy to remove but still remain firm. 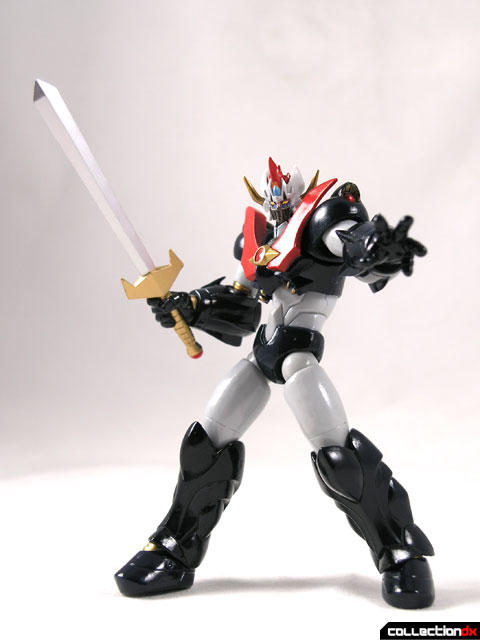 The Kaiser Scrander features amazing paint detail and very sharp points. It attaches to the back of Mazinkaiser by small Revoltech joint. The smaller of the two wings seem fragile, and one of them actually fell out on mine. It goes right back in place, fortunately. 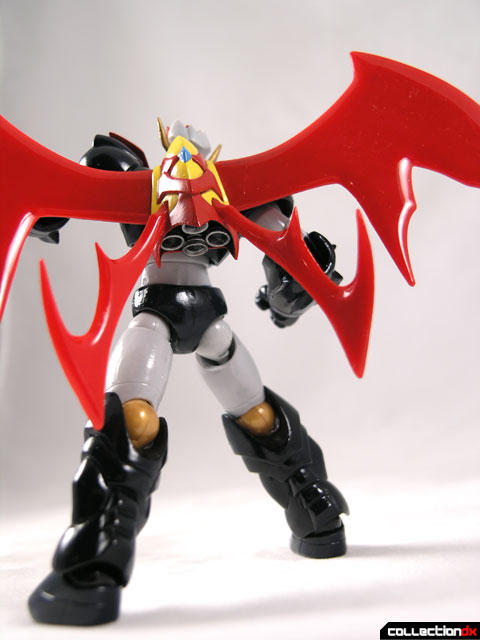 The stand is the same Revoltech stand as is included with previous releases. As before, the figure’s name and number are printed in white on the bottom. While the figure will stand on its own, the stand does help with the more precarious poses. 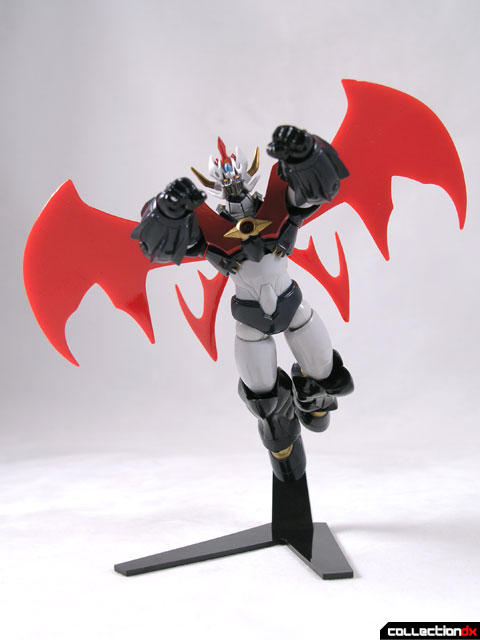 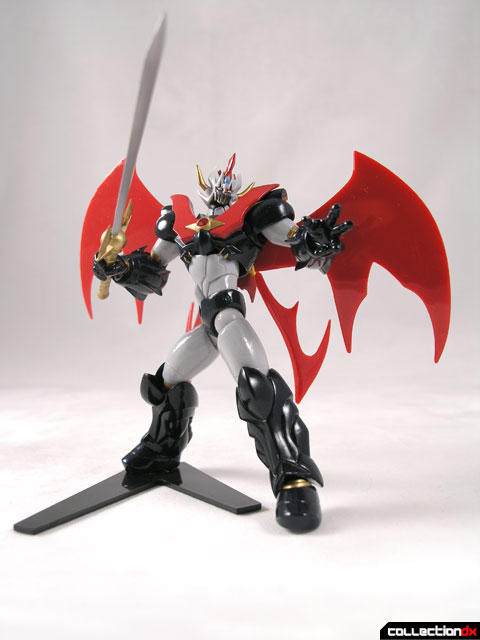 This is another great release in the Revoltech Series, and is actually my first Mazinkaiser toy. I was hesitant to drop $100 on a diecast version, but this little guy is just right. At 12 cm, he fits right in to your ST Chogokin collection, or next to the Yamato Hero Collection toys. 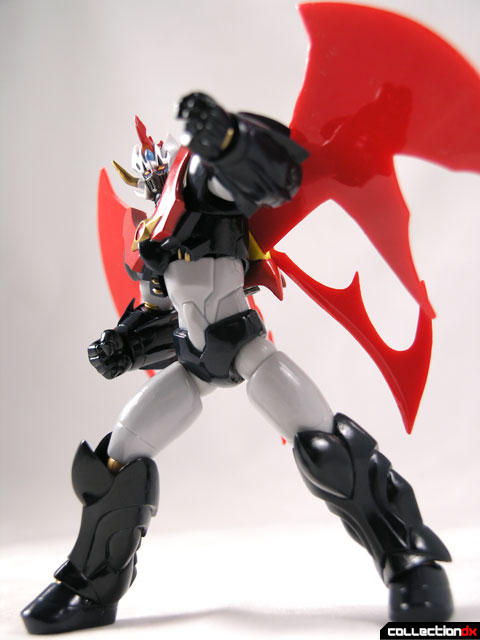