While I don’t pick up each and every star wars figure, I am a sucker for the Star Wars vehicles, particularly the ones I had as kid.

The AT-AT toy has been reissued several times since its first release in 1981. Even back in those days, the AT-AT was an expensive toy, coming in at $47.99. My parents didn’t have a lot of money, but for Christmas 1981 they found a way to get it for me. I remember that Christmas morning, unwrapping the large box. Upon realizing what was inside, I pumped my fist in excitement. I LOVED THAT TOY. 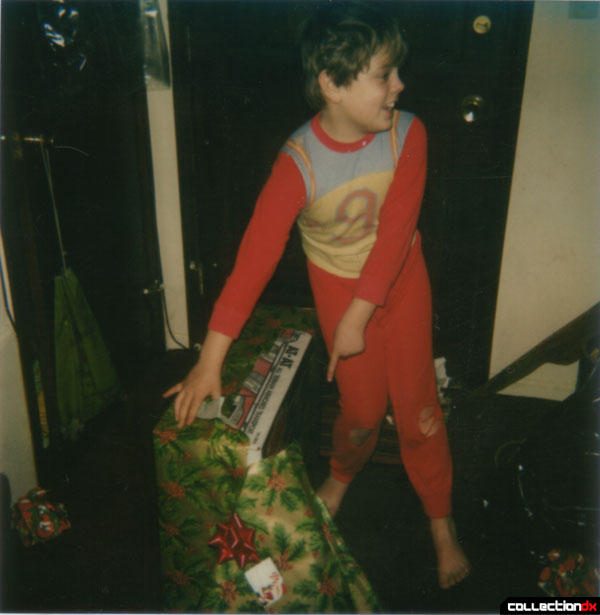 Unfortunately, I don’t remember what happened to it. When the AT-AT release came out in 1997, the price had bumped up to $79.99. Not too bad considering it had been 16 years since the first one came out. Still, for me eighty dollars was a luxury I couldn’t afford in 1997. This version of the toy used the original molds, but added weathering, missile firing cannons, redesigned light up cannons, and a whole electronic sound module. I passed on it, and I regretted it.

Flash forward to 2007 and for Valentines Day, my Wife and kids got me the latest version of the AT-AT. This one is called the Endor AT-AT, and was available as a Toys R Us exclusive. It is essentially the same toy as the 1997 version, but this one has been changed subtly yet again. Ten years later and the cost only went up about Ten dollars. 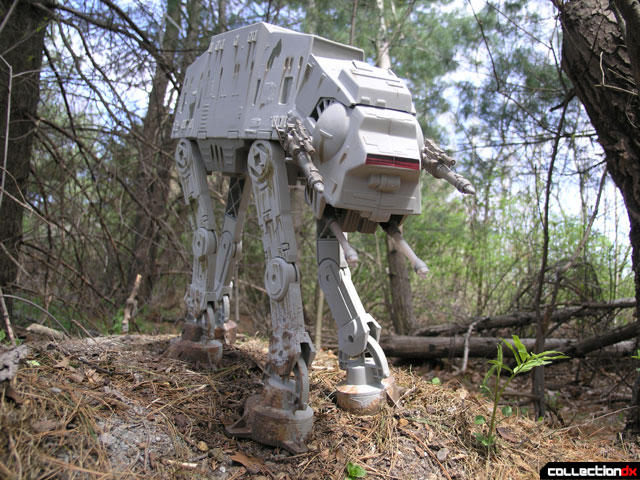 The first noticeable difference is the paint. This AT-AT has been weathered to look as if it has been walking through the dense jungles of Endor. Dirt and smudges are all over the toy, and it looks really great. Inside the body is a control panel assembly with three buttons on it, as well as a screen image. Pressing the buttons gives you various sound effects, such as laser blasts and AT-AT walking noises. The sounds and screen image have been changed since the 1997 release. 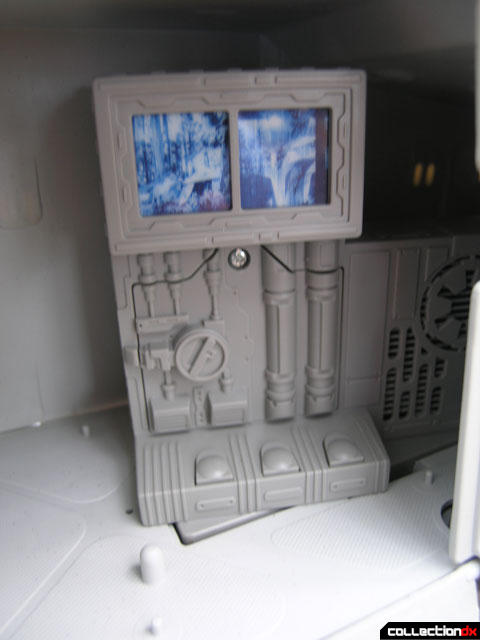 The head of the AT-AT walker features 2 moveable cannons that shoot missiles. The cannons underneath the head move by sliding a lever on the right side. Sliding this lever back and forth activates a light and sound feature that is really awesome. A red glow appears from underneath and a “Pew! Pew!” sound alarms. 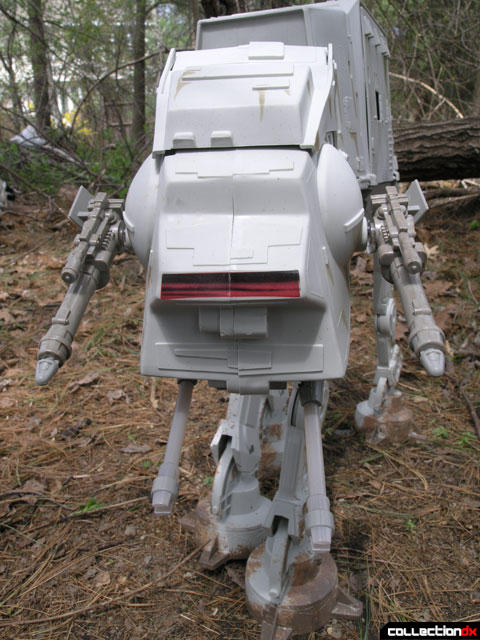 Included with the AT-AT are two figures. The AT_AT pilot is a really fine articulated figure, with all of the modern articulation you expect with newer Star Wars figures. He is a repack of The Saga Collection AT-AT Driver (SAGA-009). 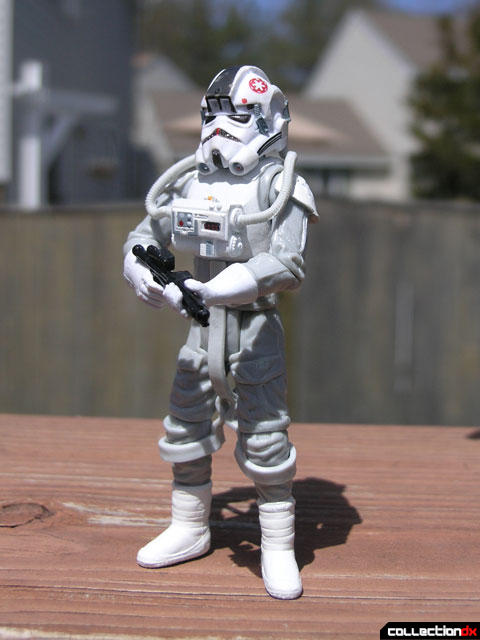 The Biker Scout is a modified version of the 2000 Scout Trooper. This new version has a new head, with a flip up mask. Who does he look like underneath? Jango Fett, of course! 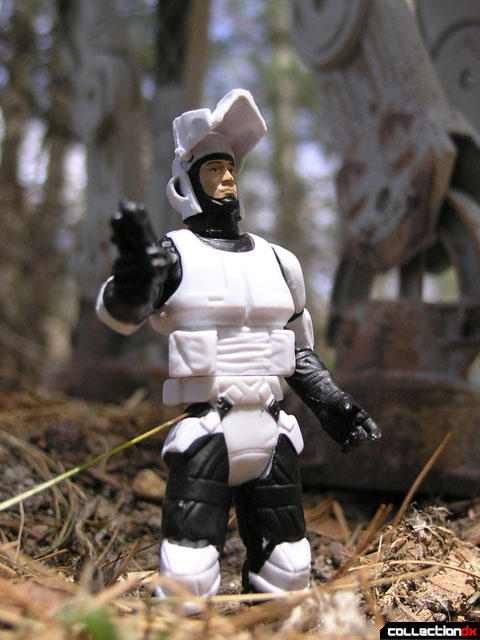 The Biker Scout comes with a small gun that can be held in his hand or in a holster on his leg. Unfortunately, this figure has the lame old-style articulation that the Power of the Jedi figures had. 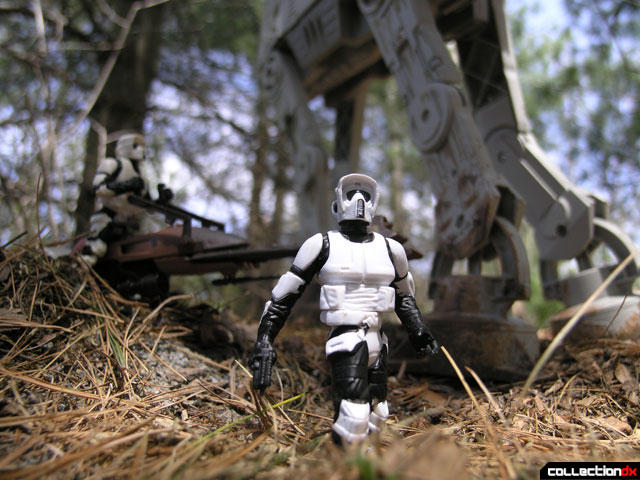 When it came time to review this figure, I couldn’t help myself. I took the AT-AT out into the woods and brought along a speeder bike. I was like a little kid in heaven. I hope you like these shots, and I encourage you to go out and get your own AT-AT and recreate Endor in your backyard. 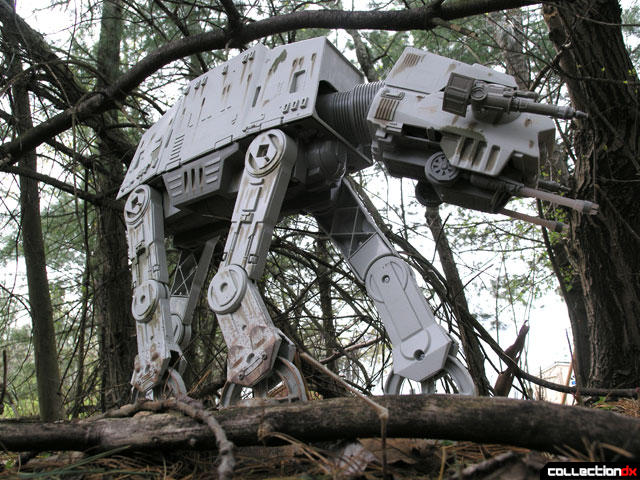 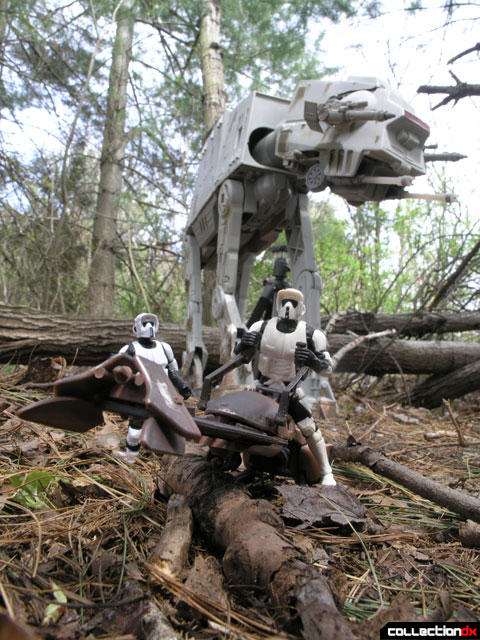 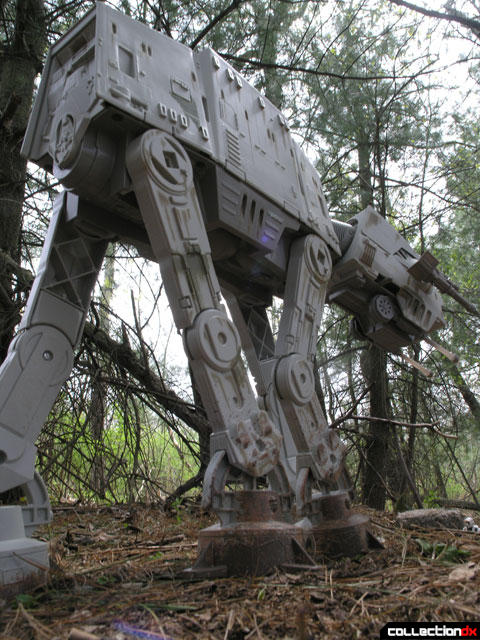 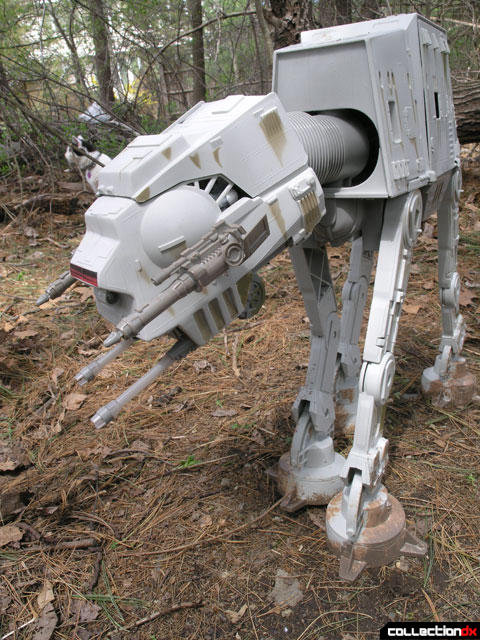 Folks generally know me as a Star Wars hater...but I'm totally loving your photography, here, Josh. Great stuff! I love nature shots with toys...reminds me of back when we really used to play with these things! ;)

I still have my original At-At from the 8t's, still one of the most impressive toys in the line.

What I really loved but never bought was the mini-rig that went inside the body of the At-At. While most of the mini-rigs didn't really look Star Wars, the At-At Mini rig looked right!

I'm glad you have another one!

sweet, love the pictures, but the last one you can see a cat. lol.