I know virtually nothing of Konami’s Get Ride! AM Driver. Wikipedia tells me that the story involved a reality show which rewarded characters with power-up armor. And this intro sure looks underwhelming.

So the show was, and is, a dud. The toys looked compelling, though, at least on paper. The 1:18-ish scale, clear parts, modular armor sets, and fresh design aesthetic press all the appropriate buttons. And when I learned of a motorcycle-based, cyclone-esque armor set, I couldn’t resist. The Moto-Bisar “Griffon” is packaged in a bloodless non-entity of a box. 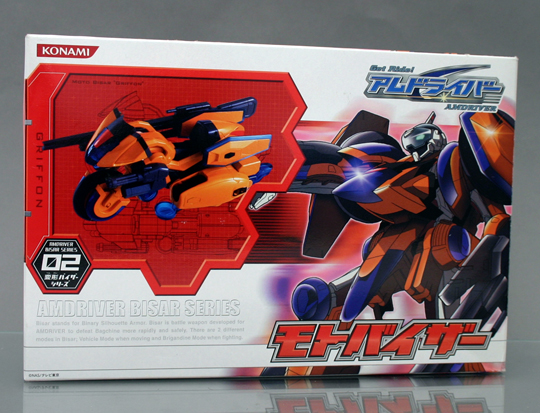 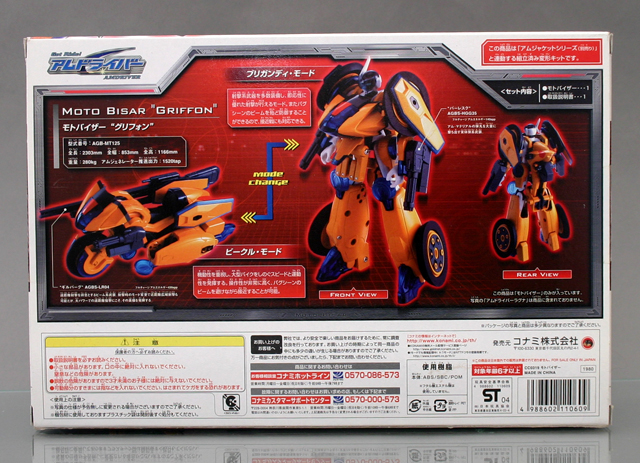 Inside is an oversized plastic clamshell. Oh, look – no figure. I guess I’ll have to buy another toy for this to work. Ooh, a gun and two armor plates for accessories. 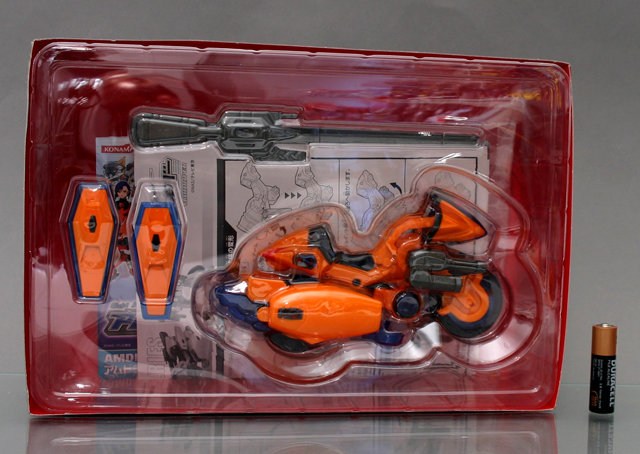 So the Bisar armors come without figures, fine. So I buy one of the dozens of slightly different AM Driver pilots. The pilot figure is fine. It’s pretty lightweight, the plastic feels insubstantial, but it poses fine and wears a clear helmet. 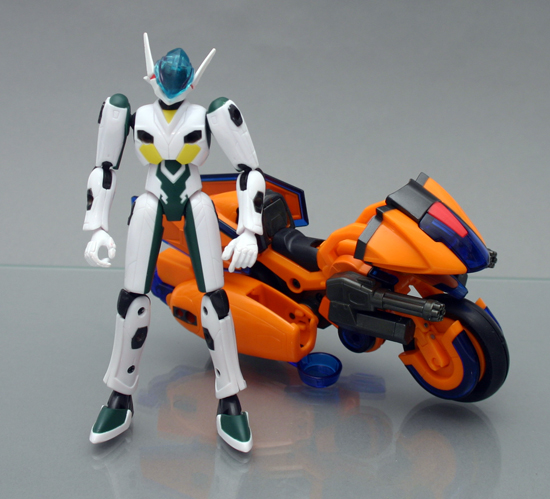 The motorcycle, too, is fine. It looks good, if a little cluttered, and rolls on rubber wheels. The balance of colors and clear blue plastic is appealing. I’m still a little put-off, but warming to the Griffon. The ABS, and it’s all ABS excepting the wheels, is sturdy. I could use some decals, but the AM Driver look is more stripped down, which I can appreciate. 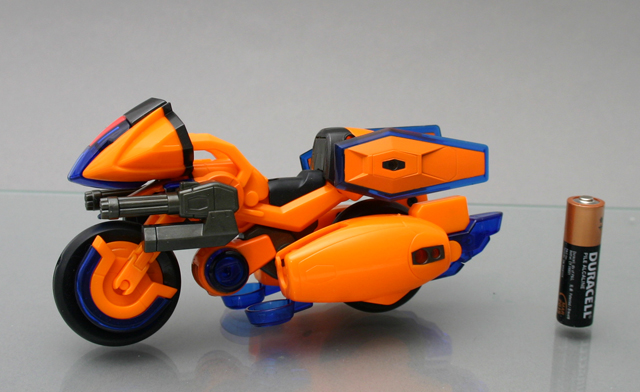 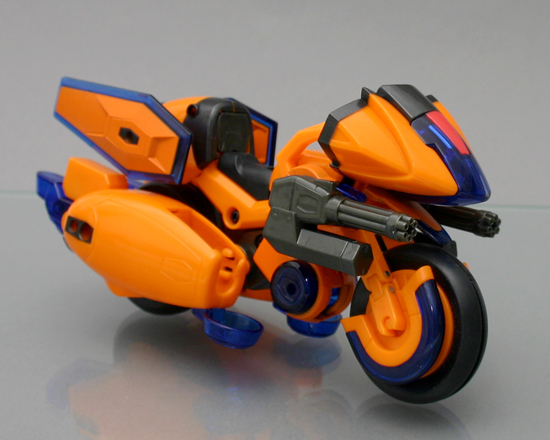 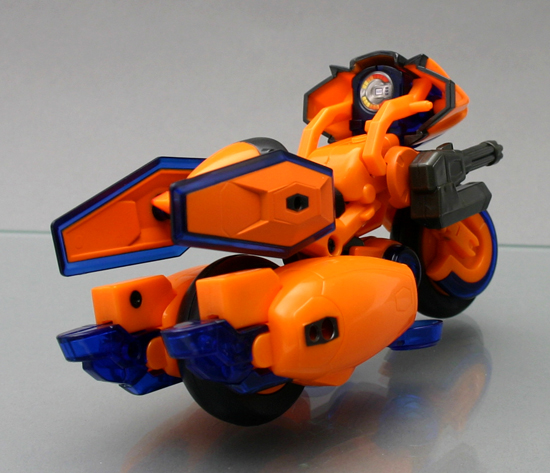 The driver fits on the bike nicely, which is unfortunately a rarity with toy motorcycles. 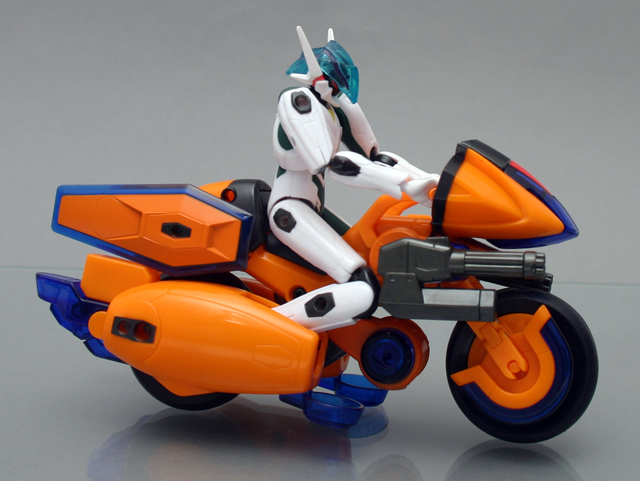 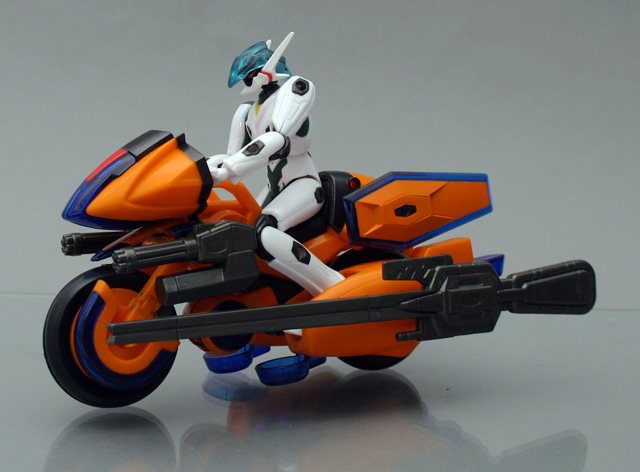 Let’s get this mother into armor mode. The Griffon is a parts former. I’m not obsessed with perfect transformation, so I’m okay with that. The bike separates into a torso pod, super boots, and assorted tack-on gewgaws. 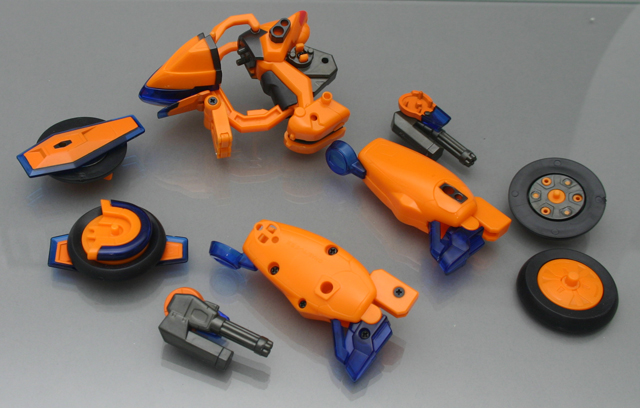 The legs and torso go together without incident. The rest is a joke. All of the arm and shoulder armor falls off constantly. The shoulder armor doesn’t even have the proper clearance to function. It conflicts with the chest, and you have to bend the arms back and force it on, whereupon it immediately clatters to the ground. 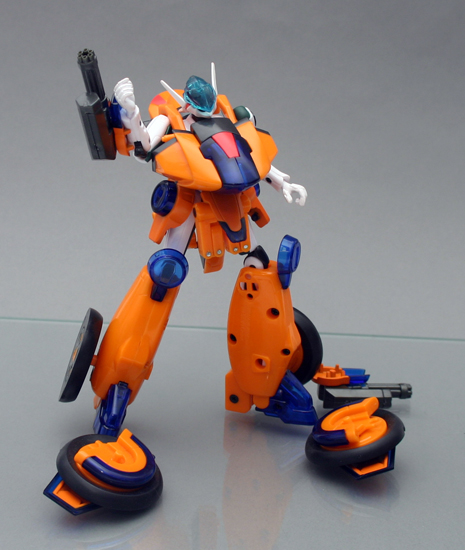 But it certainly photographs well, for what it’s worth. The design looks great. It’s too bad it doesn’t actually work. 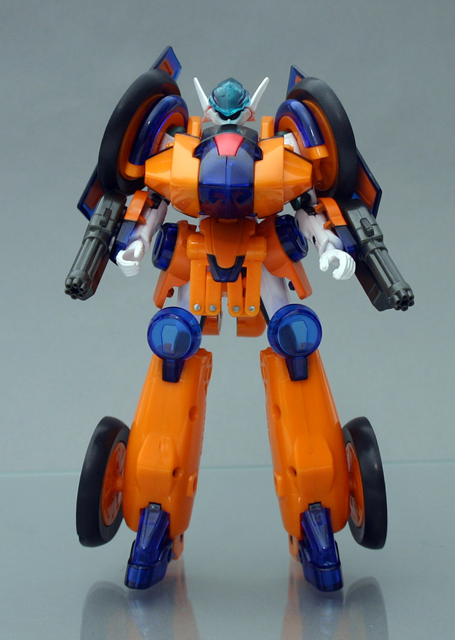 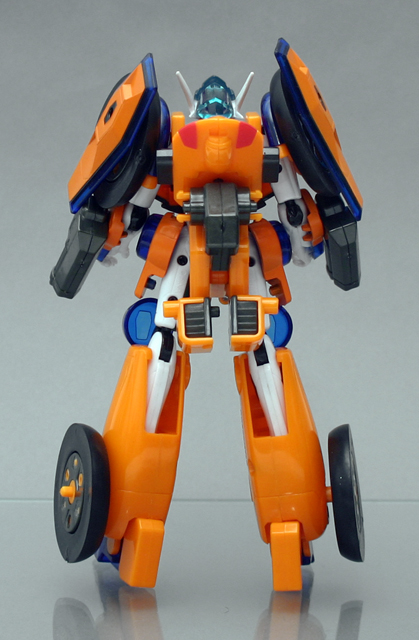 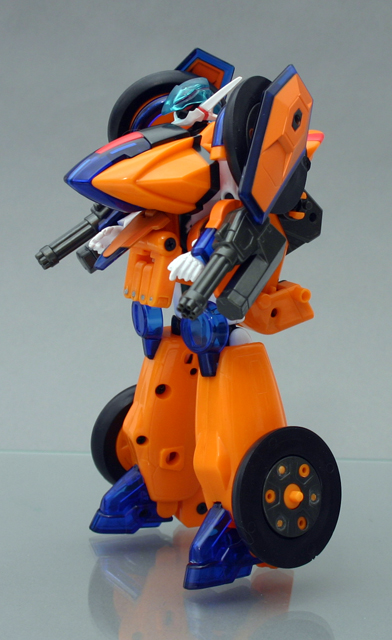 I have a couple other Bisars, and they are generally more successful than the Griffon, if similarly unexciting.

I always felt bad about missing out on this line. I dig the aesthetics. Anyways, nice review. You highlighted many things I've never seen the Japanese reviews discuss.

I had several of the bisars and a bunch of the "neo" figures (which have better joints than the initial figures). I greatly love the idea of "transformable" armor and weapons from vehicles and whatnot, and Amdriver really does an excellent job of hitting the right notes, but the toys themselves feel very unexciting once you have them in person. As said in the review, they sound awesome "on paper," but once they're in front of you and you're actually manipulating the figures and bisars themselves, you can see and feel the clumsiness and awkwardness that is posing and/or interacting with them. This ultimately lead me to letting go of the toys I had. However, I still would like to get my hands on some of the larger sets, if only for display purposes.

God-damn I wish I had enough figures to be bored of it. I absolutely adore the Neo figures- they've probably got the best posability of any mass-market figure I've seen. I also have the very basic jet-board Bisar, which is simple but actually pretty cool. It seems you just can't find them anywhere these days (and Big Bad Scalper Store has terrible UK shipping) which is a wee bit of a shame.

Do you have the purple mono bike one? Never got into the line (as the new Microman was out at the same time)

Where did you get these? I've been trying to find decently-priced Amdriver stuff for a while now, and they're hardly ever on eBay.

I never understood how this line failed to catch on until I bought some. It's got a great late 80's style, there were a ton of figures, vehicles and accessories. It was an alternative to Microman in a slightly larger scale (amdriver is about 1/15) with an emphasis on vehicles.

The show is God-awful, so that's partly to blame, but there are great toys that succeed with a horrible show, just look at Evangelion (I couldn't resist).

I have a dozen or so of these that I got in one big lot and I agree that although they have style to spare, the fit and finish is a little on the sloppy side. My Griffon barely stays together since some of the pegs and holes are either too lose/tight or actually too short to hold together.

So they are great to display and look good standing still, but as a toy for a kid they would be disappointing. The toys weren't cheap either, most figures were about $20, and the vehicles ranged from $30-$70 each, probably another reason the line failed. Building a set of the toys would run into several hundred dollars if you wanted a few figures and several vehicles.

The Griffon is one of the toys that gets people into them, since it is a great-looking toy with a Mospeada-esque style. There is a white one too that includes a figure which was an exclusive of some sort.

Yahoo Japan is probably your best bet for these, the other places I've seen these either list stock that was long sold out, or charge a premium price for what little they do have. These toys are subject to the big box problem of the 90s. You see how big the box is compared to the toy, this makes overseas shipping painful. And the the Griffon is one of the smaller pieces of the line. This makes a pricey toy even more expensive, so if you're looking to get these cheap, good luck. Unfortunately a line that is unknown in the West makes finding pieces that much harder, especially if you're competing with others looking for the same thing. Welcome to collecting obscure toys.

Here is a link to the official site that shows all the stuff they made: (Japanese only)

This line looks so cool and I never even heard of it and if there wasn't any review I would Have been all over this. But when Duke and Enthusiast put their two cents worth, two people I always stop and listen to, it seems like a really sad let down. We can never have enough cool looking motorcycle armor and it seems this line just didn't come through in terms of quality and a storyline.

Don't get me wrong, they're not terrible, just a little of a disappointment after looking at the images of the toys. The high price and difficulty of obtaining them causes some expectations to form, then upon "playing" with them you start to see some quality issues and some design choices that feel like they were more concerned that it transformed than what you actually did with it after doing so.

As display pieces they're fine, the pictures are proof enough of that, they just aren't very good as a toy. I'll dig up what I have and see if I can throw together a review.

I second everything DT said. If I found a bargain, I would probably buy more Bisars. But I'm sick. And there are no bargains. Your best bet is to either bite the bullet or stake out YJ. Although Robot-Japan and TBDX for sale threads can also yield good finds.

Yeah, at the time, Konami had a joint venture going with Takara and I was really surprised that they didn't do this as a Microman tie-in line. I'd find out later that this kind of lack of ability to "play well with others" seems to be a characteristic of Takara's often short-sighted go-it-alone approach in general. Konami later bailed on Takara, which later got picked up by Tomy, which you'd think would be another match made in heaven (OMG Microman+Zoids+Transformers? XD), but...

Anyway, a less known fact about AmDriver toys is their system continued development as the Busou Shinki line. While some of the attachment configurations don't match (a lack of sockets on Shinki toys' lower legs), the pegs and sockets are interchangeable and the figures are more or less the same size. You can do some pretty nifty mash-ups between the two toylines. I only recently acquired some used AmDriver stuff and can attest to the potential.  An example: http://mitoh.hp.infoseek.co.jp/ARNVAL/ARNVAL_TYPE-P.htm

The anime for this WAS slated to be released on DVD here, by a company called Illumitoon. I think only one DVD got out before they went out of business.

If you remove the inner shoulder armor, everything stays together well. So just plug the wheels directly into the shoulders