I don't know much about Devilman other than it was created by Go Nagai in 1972. Honestly the fact that it was a chogokin made by Marmit was the main reason I bought it. I read somewhere that Devilman was Marmit's first "Heavy Gokin" and decided to buy it. The box was small, almost the size of a book and got me nervous. 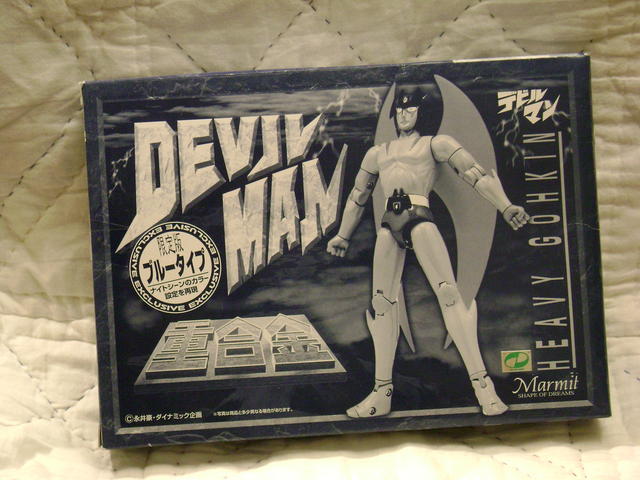 I opened it and was happily surprised! The figure was the size of most SOC, around 6 inches and had a very nice heft to it and a ton of diecast. The face, extra hands and wings came in simple plastic tray. 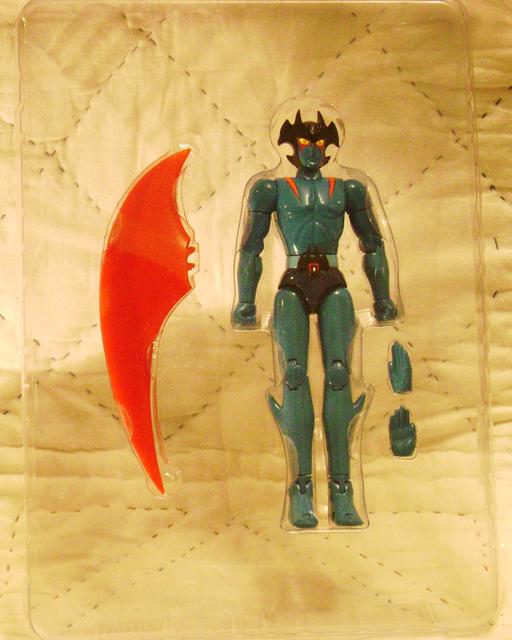 This figure is the blue version, the normal box and regular version is green... I liked blue better so I bought this one. 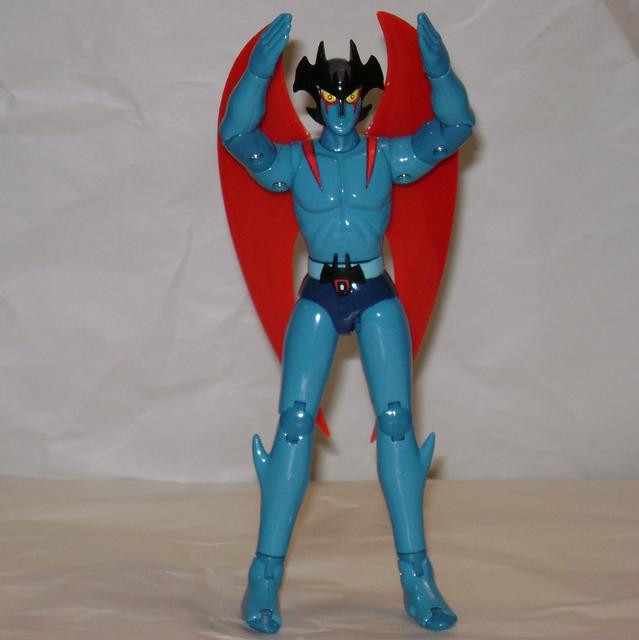 It has a nice presence and tons of articulation, everything, I mean everything turns, moves, tilts, you name it. 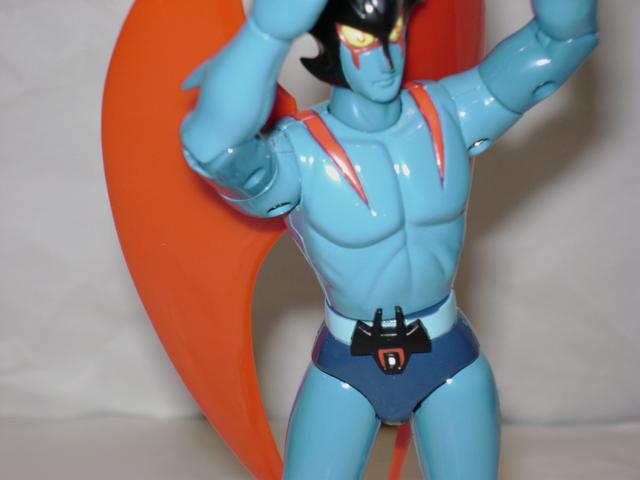 You can switch the closed fists to the karate chop hands, pop the wings on his back and he is ready to go. The waist turns, the legs tilt, ankles turn, and toes tilt. 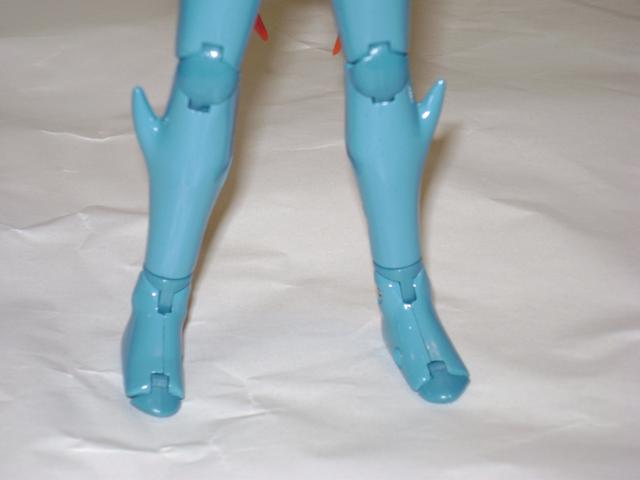 The arms move into tons of positions. 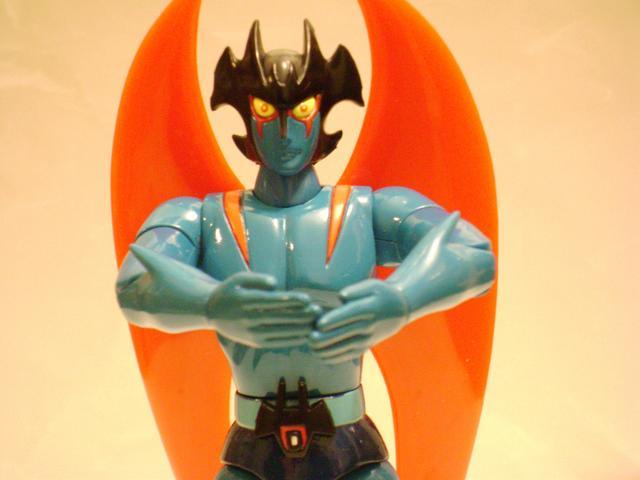 I really like this chogokin for its price, originally angloz.com had it for only 12 USD but sadly I missed out on that and bought one for 20 USD plus US shipping. Have to say for the amount of diecast (the chest, forearms, legs, feet, everything other than wings, head, hands, and joints are diecast!!!) for 30USD or less seems a better deal than some of the crud I have bought. 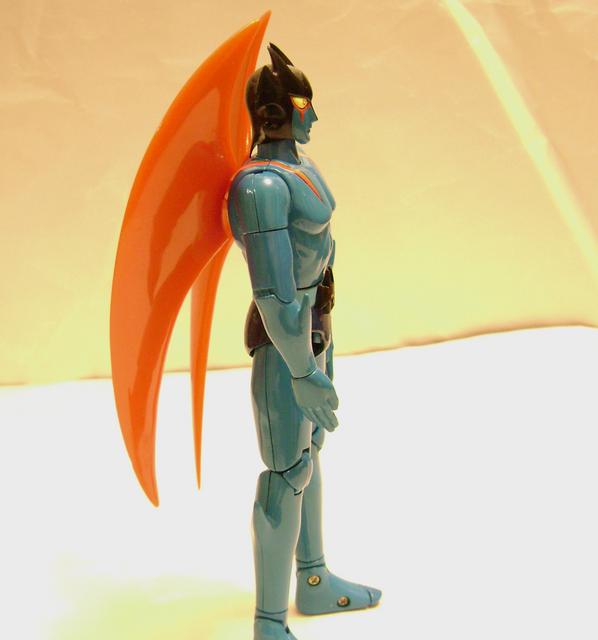 Of course there are minor paint flaws, and plastic joints have off colored look but I still love it. 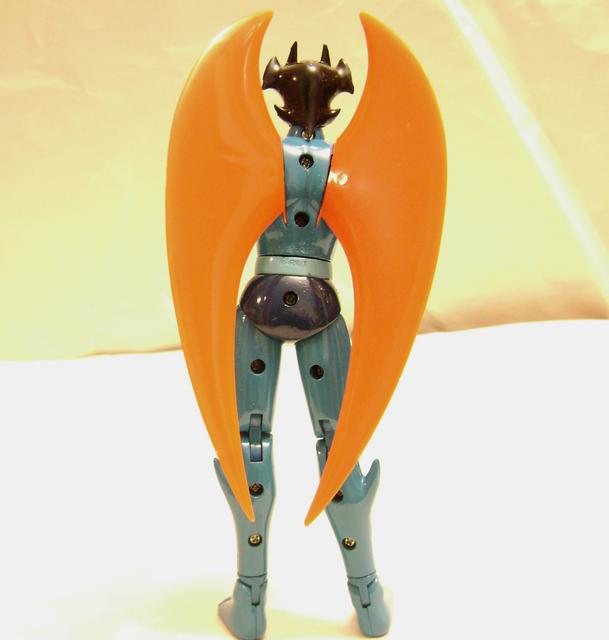 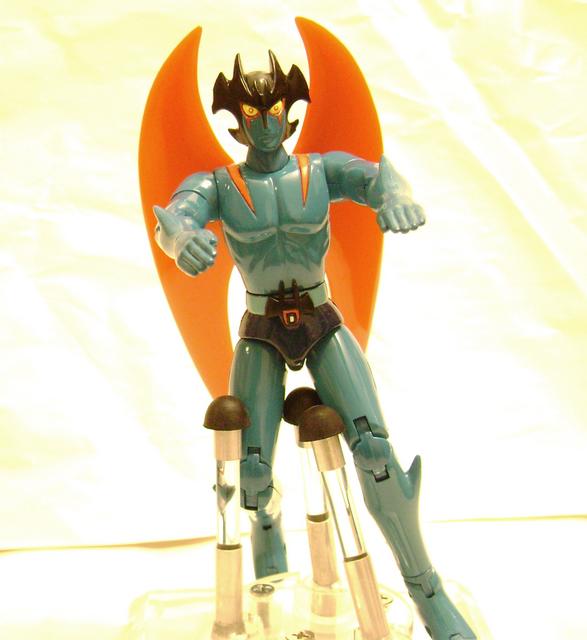 As you can tell with the pictures utilizing the joint articulation, you need a stand to keep it upright, as the legs and feet are so narrow that in other than normal poses he falls over... adapt is the key to life. 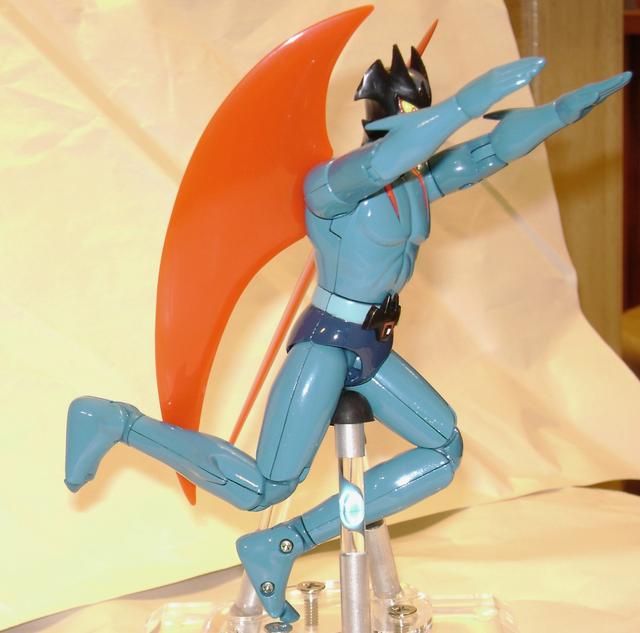 So basically Devilman a nice "Old School" chogokin that is simple and artistic. Surf eBay and get one if you like diecast, Marmit... or Devilman (I know, I know I should watch some cartoons of him on youtube) 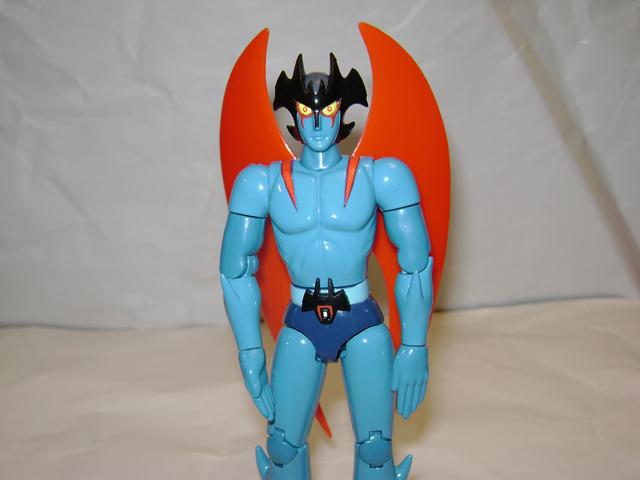 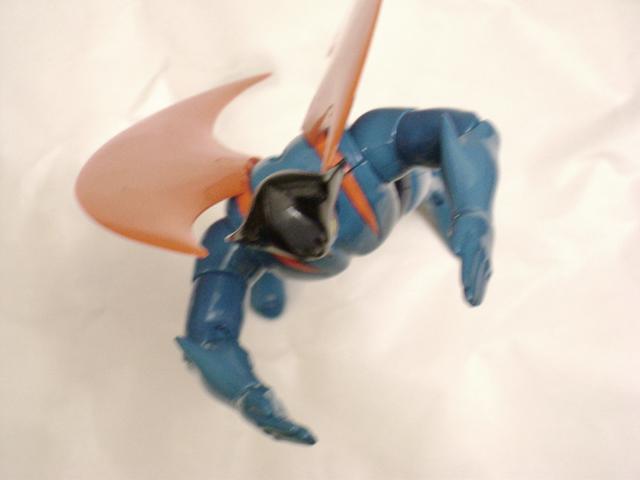 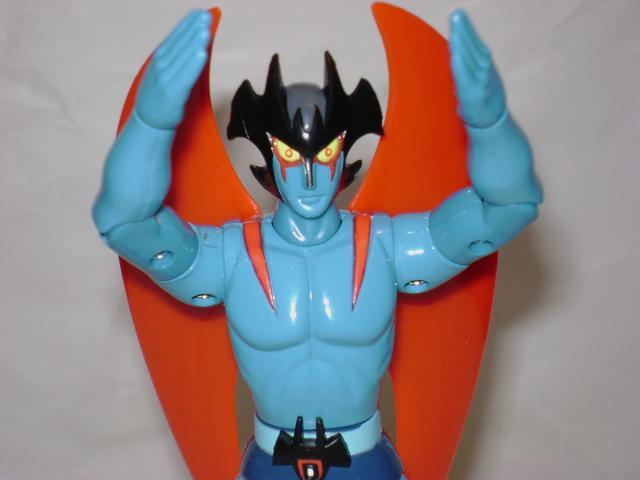 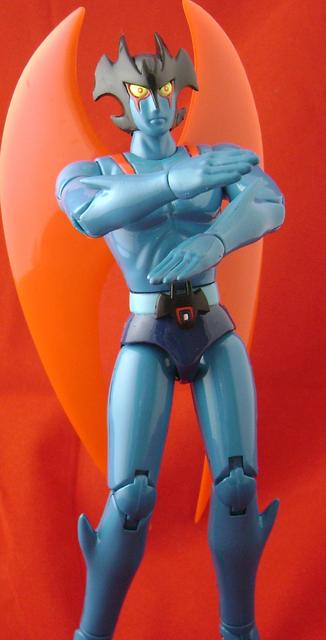 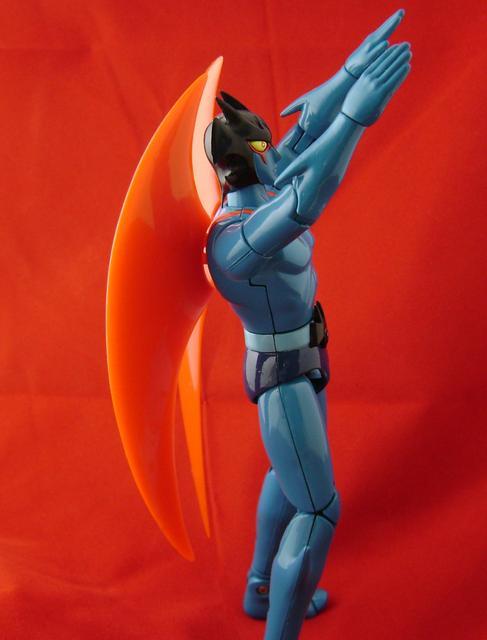 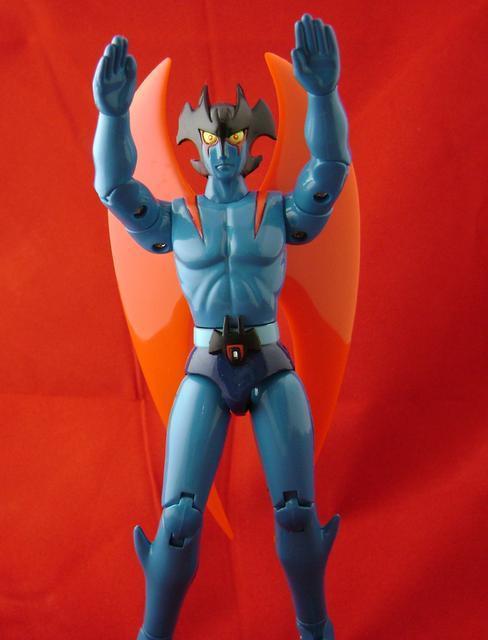 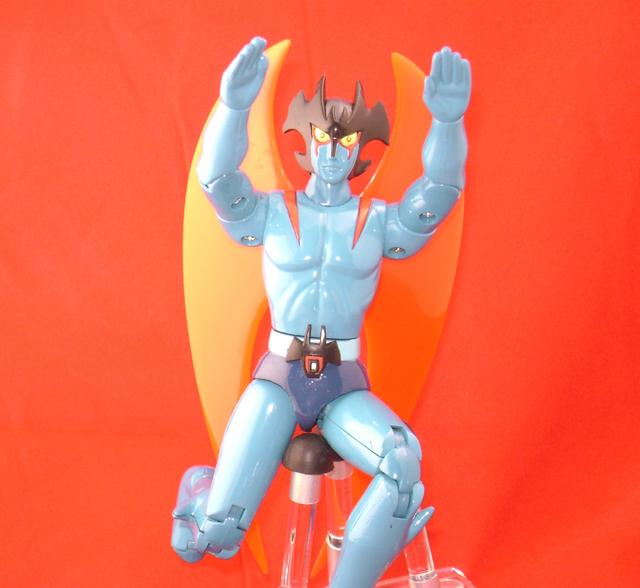 I have to be honest I gage articles success by amount of comments...oh well:)

dear god i love this toy! i have the green one, it is so heavy and sexy! those spikes on his arms and legs are 100% metal and scream "ima poke your eyes out!" i cannot reccommend this toy enough. the only minor quibble i have is that the paint scrapes around the joints, but only if you're rough. this is my first and currently only metal toy, so i guess im not as authorized as the regulars around here to make a valid suggestion, but as a first chogokin, i can definetely see how one would become addicted.

these things must have been produced in such large numbers, I remember them being clearanced right after they first came over to the US through diamond comics distributors. They made three versions - blue, green and purple.

The toy is not bad at all, but has a few issues. On mine the joint at the upper arms was unable to turn much due to a mis-mold, and the back wings dont stay attached.

Josh do you have a picture of the purple version of this devilman?

I tried google but with no luck,I really want to see one :(

Thanks for the link Modcineaste!!!

Wow the purple version is pretty nice too,damn they only made 2000 piece?

sigh,anyway i just bought myself a blue version now :)

I need to buy one of these myself, I like the blue one as well! Glad you were able to pick one up yourself! Cheers LF

This is a fantastic figure and it's made out of metal. I have to track down one of these after reading your review. I love how they kept the 70's Go Nagi art design and didn't try to up date or modernize it. they kept it pure and simple. How many other figues did they introduce into this series?

after this figure, Marmit went big in both price and size.

With huge Mazinger, Grandizer, and Great Mazinger all solid diecast...around 600 USD each cheapest

and of course the Marmit Andromeda and Deslar's ships from starblazers.

BTW anyone one this site ever track down if anyone is selling the Deslar ship, let me know. Was sold around DEC, was mentioned on this site...but never found site that sold to the USA

BTW Josh, There was a purple ONE...Damn..never saw him, I love that imperial purple...

Finally a review for this devilman!!

There is also an EXCLUSIVE GOLD VERSION DEVILMAN in ebay.

Ever since this review I've had to own one of these. I finally got it in the mail today and "Wow!" if you are a SOC collector you must have one of these in your collection to put next to your Mazingers.

The figure lays long ways in the box and so it was much bigger than I imagined. A first class toy at a great price. I think I need to find the other colors now.

Thanks for the review and turning me onto this figure!