The Stealth Voltron was a new Voltron created for inclusion in the 1998 "Voltron the Third Dimension" show. The show was the first sequel to the original Voltron and was made with early computer graphics animation. It looked like crap, but it meant new Voltron merchandise and that's always a good thing.

You have to give Trendmasters credit. From 1998-2000 they threw their might at the Voltron franchise, creating a staggering amount of toys. With new Voltron robots came new options for new Toys.

The Stealth Voltron came in several different offerings. There was the standard 6" action figure, the 12" combinable lions (shown here) and an even larger giant-sized 22" set. All were made out of plastic.

This particular Voltron came packed in a box with all the lions in their separate lion forms.

Each lion is fully articulated and has several action features. They all retain their signature colors with a sleek black body. 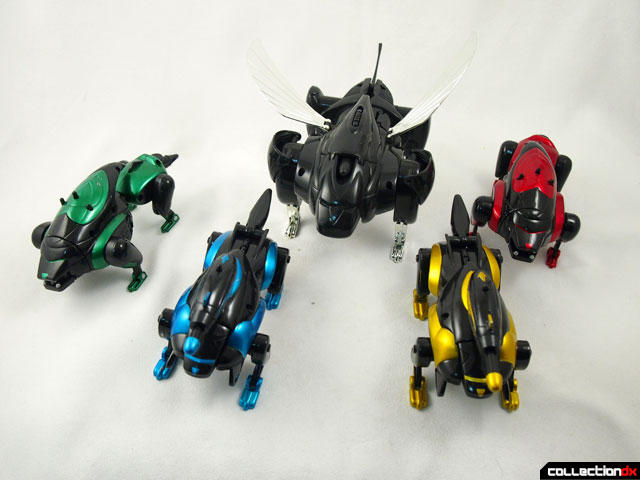 The red lion forms one of the arms and has the ability to drop bombs from under the chest. The bombs just pop out when you press the buttons on top. The legs are fully articulated , the tail moves and it hinges at the waist. 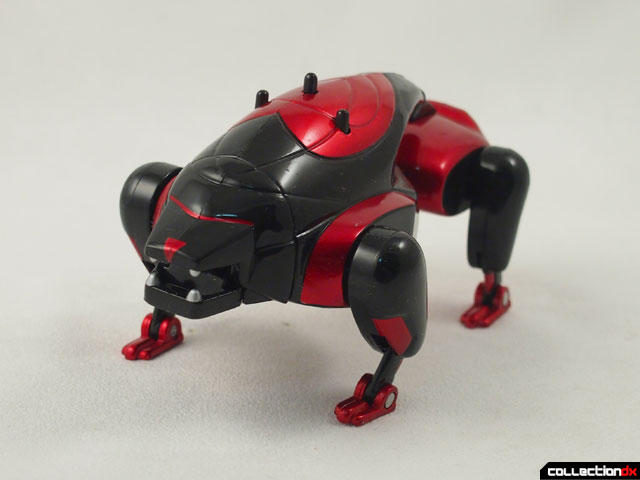 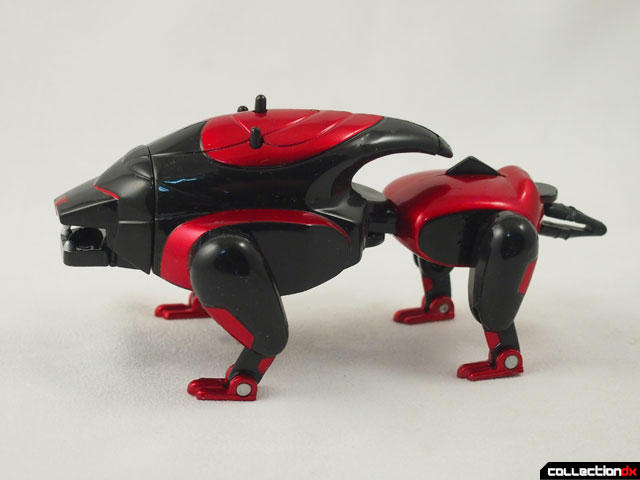 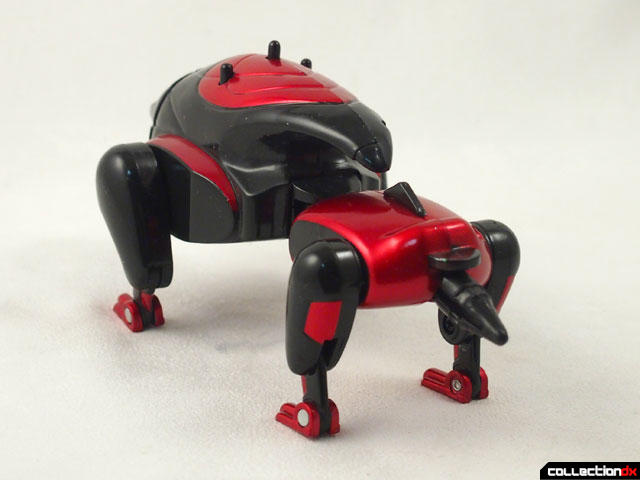 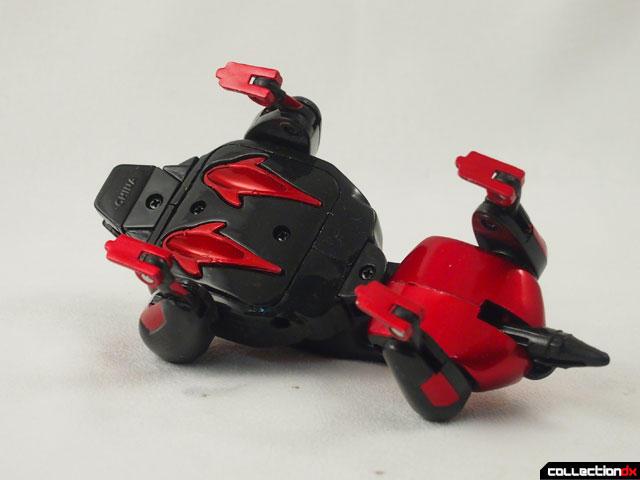 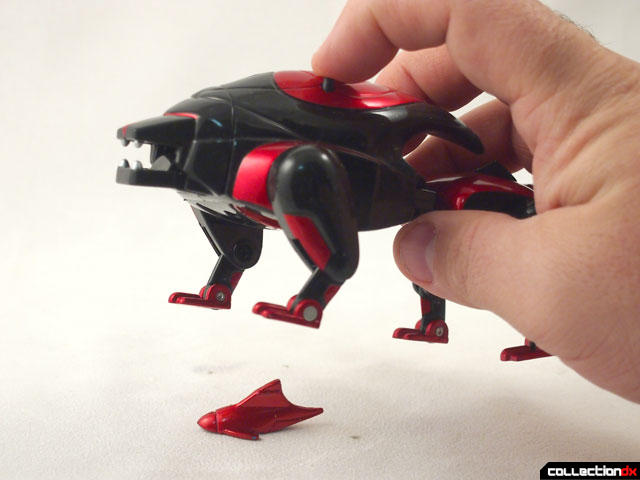 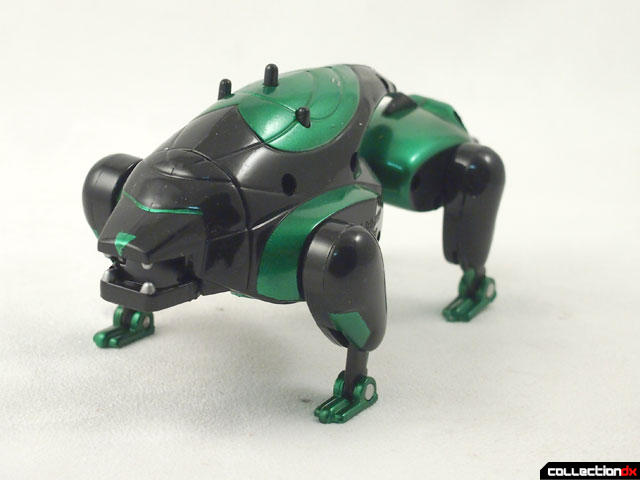 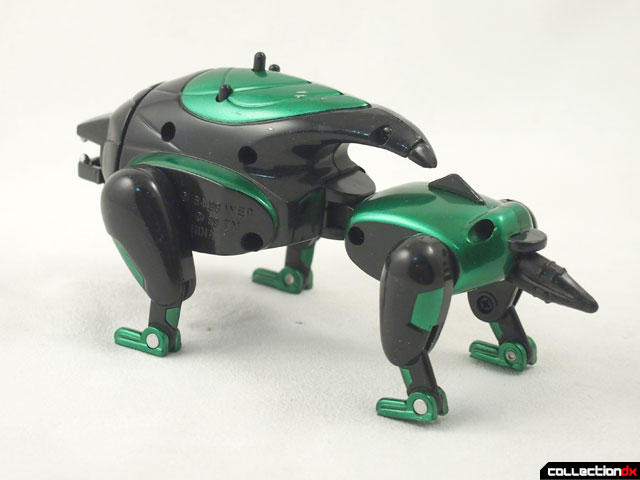 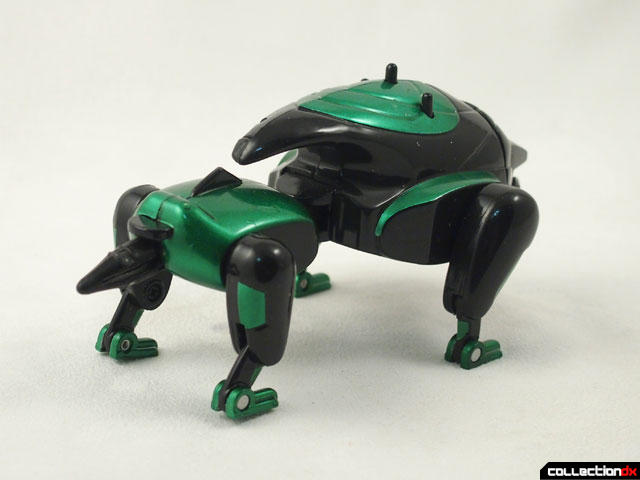 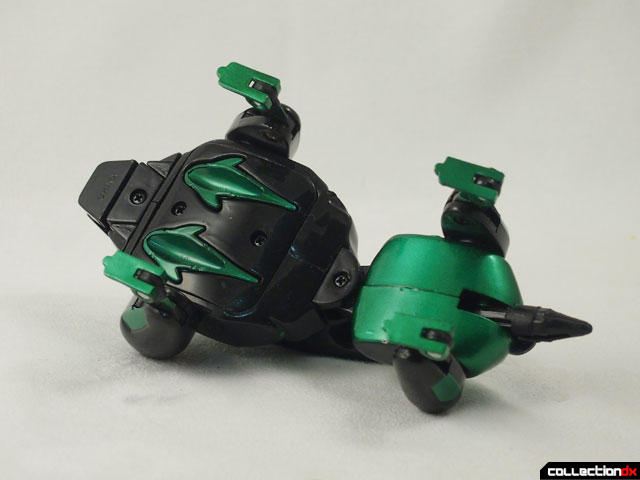 The Yellow and Blue lions form the legs, and each have the same articulation and gimmicks. Both feature movable heads, legs and tails, in addition to a back-mounted missile launcher and disc shooters under the chest. 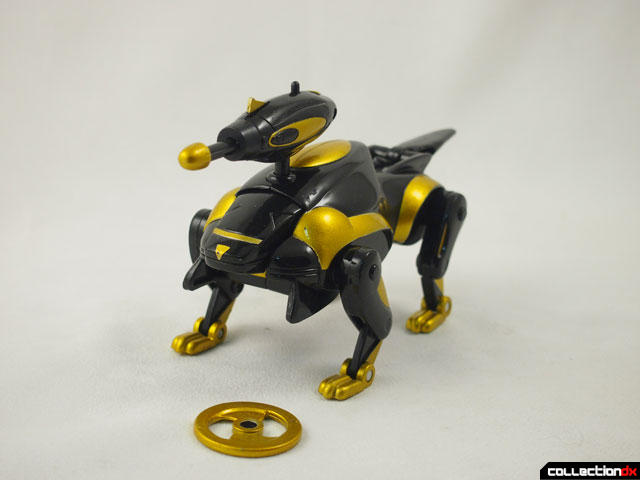 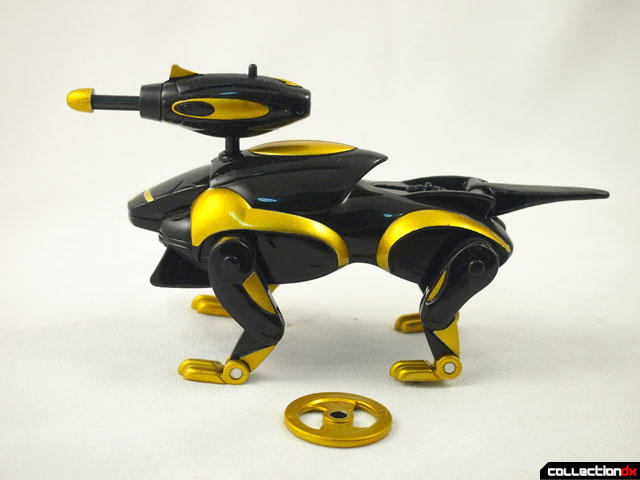 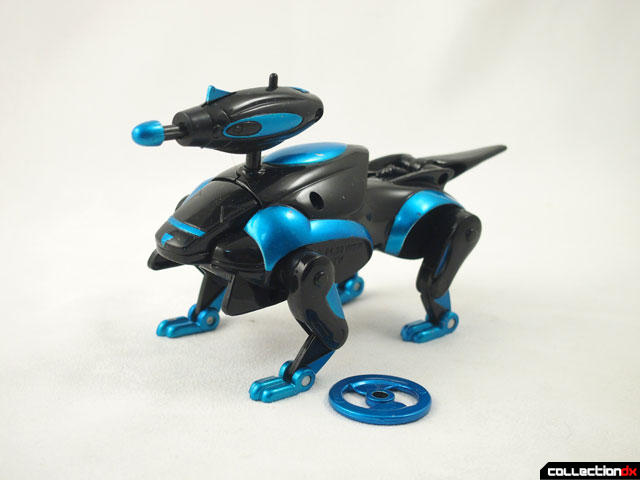 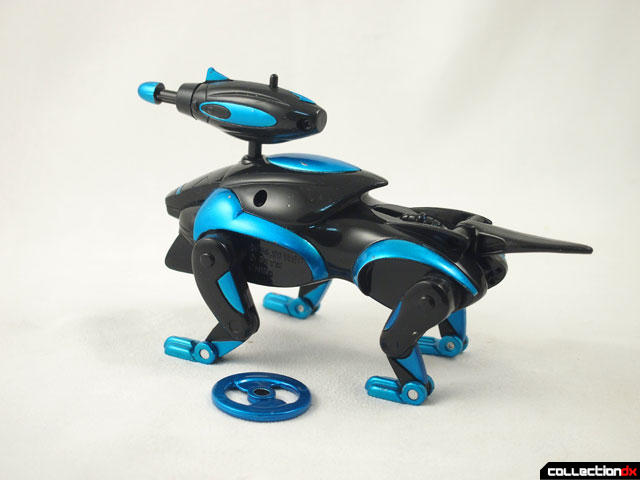 The Black Lion is actually rather plain looking at first, with no paint details anywhere on the body. It's a rather flat-looking body with a few hints of chrome where the articulated legs and wings attach. There's a missile launcher above the head with a solitary black missile. 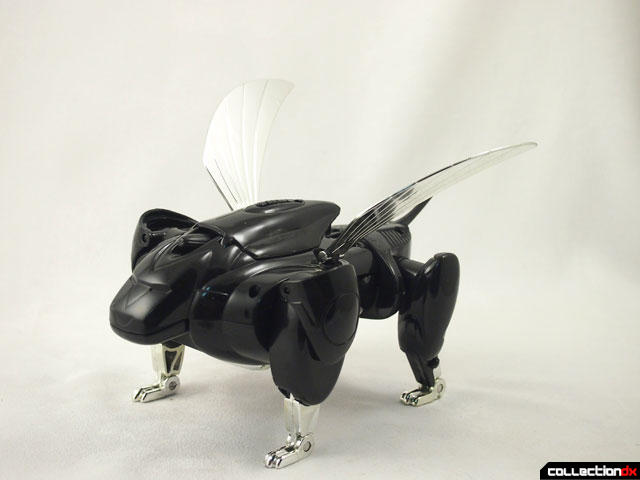 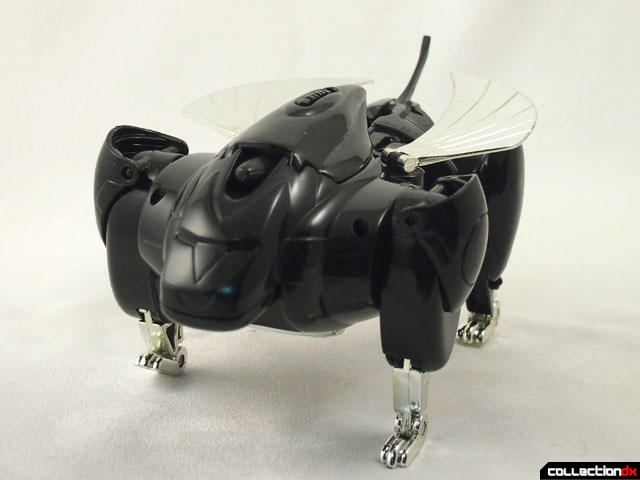 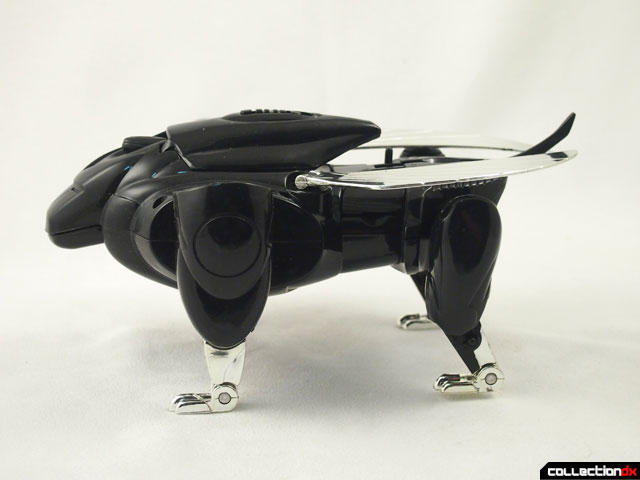 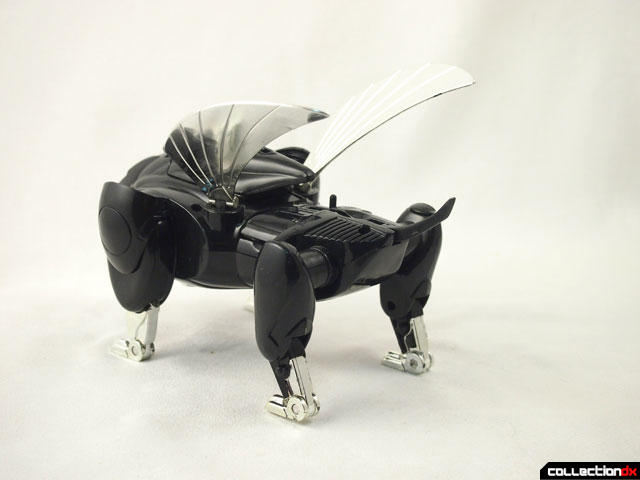 One gimmick the Black Lion has is that it... poops bombs. The side has a loading panel that opens where you can insert the pyramid shaped poop bombs. 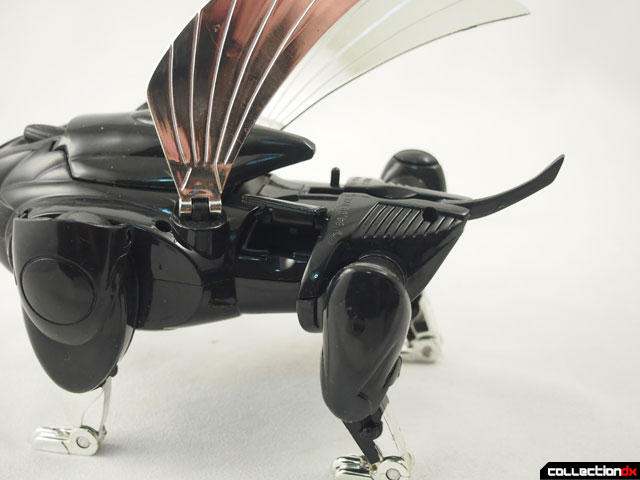 Press the button and a panel underneath opens to drop the bombs. 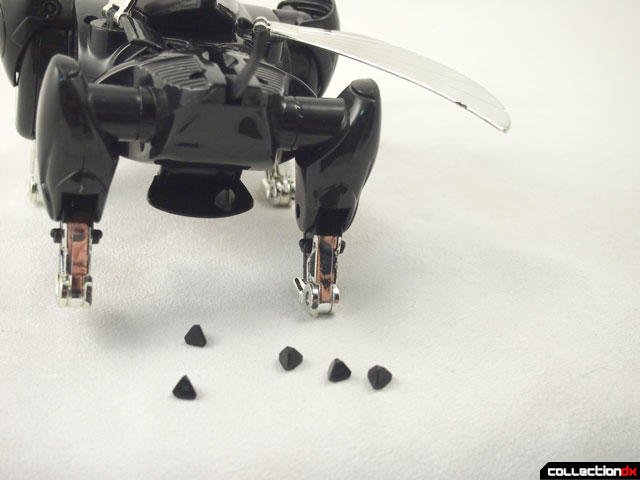 Despite looking totally different, combination is essentially the same as the classic Voltron. Be warned though, too much force will make the plastic disintegrate. When I tried to force a secure connection between the legs and the body the black plastic of the lions crumbled in my hands. 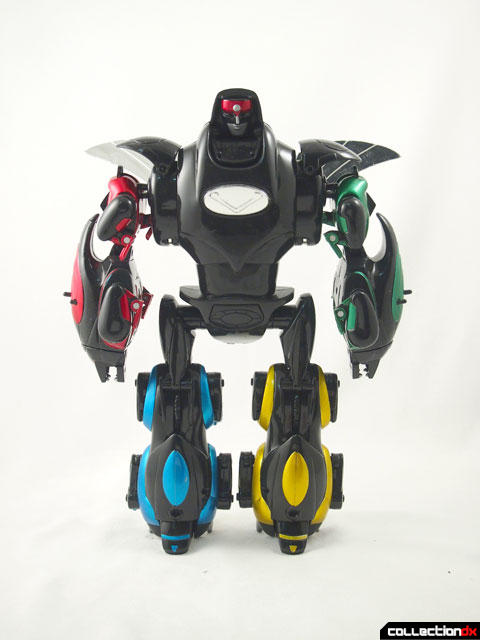 Still, the combined Stealth Voltron looks neat, and has an acceptable range of articulation. 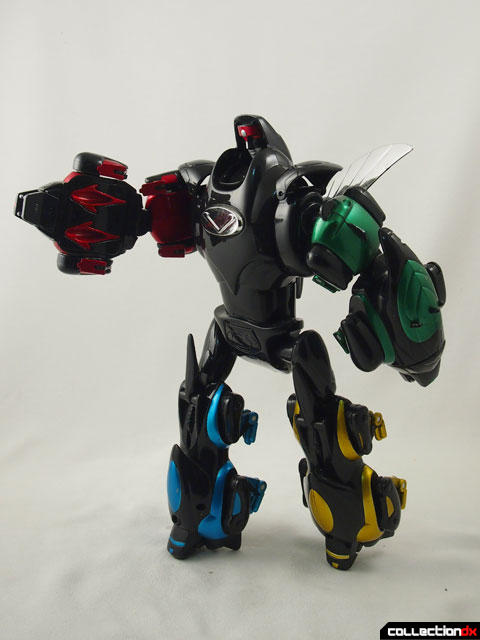 In this mode, each fist fires, just like the original. 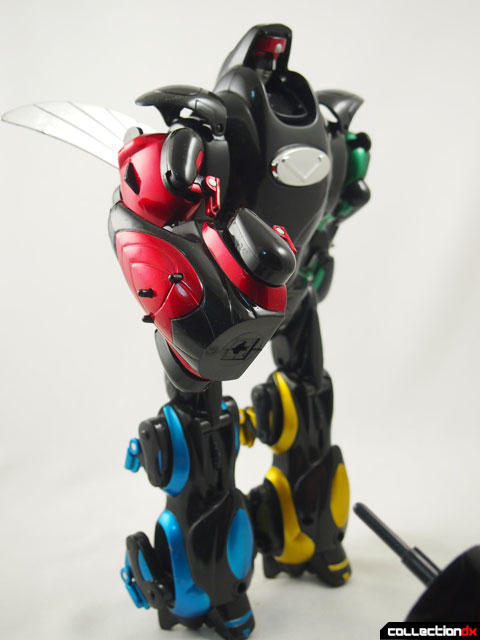 Also like the original, Stealth Voltron features a sword and shield. The weapons are a bit too heavy and awkward for the toy to hold in anything but a basic pose. 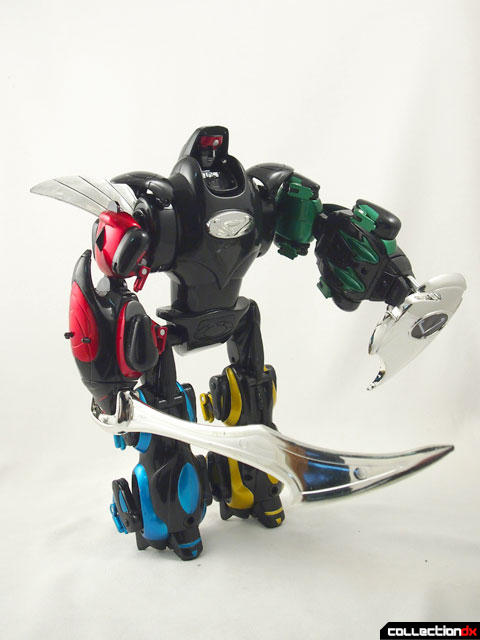 The Stealth Voltron design took a while to grow on me, but I ended up really liking it. I like how they kept the formula of the original Lion Voltron but tried to modernize it. All of the hallmarks of Lion Voltron are there, just updated for the digital age of 1999. 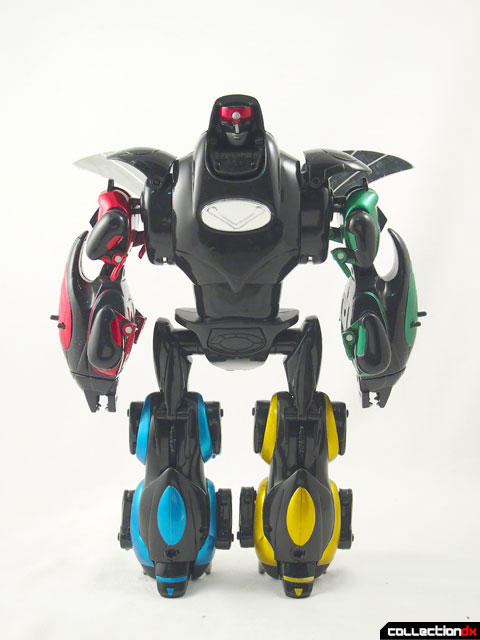 My college roommate, Bil, joined Trendmasters so he could work on the Godzilla toys. He also got to work on Battle Planets and then he got to design this future Voltron. I was always jealous because I like to draw robots so much and of course Voltron is too damn cool.

Let me know his name and I'll add him to toy designer!

Well if you see him again, shake his hand for me, for whatever he did for that Battle Planets line! I've only ever see pictures of it, but it became an instant favorite and I really wana track down a bunch of sets. I miss the days of miniature "world" sets like that.

Tell him THANK YOU.

War Planets were Dope! I loved that line. Such a great micro playset line, I rank it right up there with Mighty Max. Trendmasters also did a great job with their Godzilla Micro playsets. Those were such a thing of the 90's. I sure do miss them.

I have a Casper the friendly Ghost playset they made. I should review it. It's amazing how much stuff they crammed into it.

So non threating, i just want to pet them!

Very unusual set, I barely remember the series I was in College at the time.

Didn't even know they made a set, very cool in that unusual sort of way!

I've heard about Stealth Voltron before, but this is the first time I've actually seen what it looks like. (Given that it's Stealth Voltron I suppose this is only appropriate.)
I don't quite have as high an opinion on the design as you do, Josh.

I think this one looked more like super sentai than super robot.

I really like the stealth lions, but the head in Voltron mode just kills any interest for me.

That head is seriously rough. It doesn't look too off from the front, but MAN this guy is problematic when you see it in those profile shots. The lack of any depth makes it look like he has a Guess Who tile for a head.

Agree about the individual lions though, the designs are neat.

William Bronson is the name of my friend who worked on this.

Interesting figure. He is also growing on me. I like the idea of doing more with trendmasters. They really did jump in and make a lot of toys figures. I only wish I was paying attention at the time, I still need a stealth and vortex voltron.