Take one turtle the size of a cow, and combine it with a special green crystal. Then, allow for two seconds so the combination can grow to gigantic proportions. Result: a transformable robot with thick green armor, plenty of energy, a set of powerful cannons, and the height of a 20-storey building. Interdimensional being Zordon gave the Power Rangers access to Tor the Shuttle Zord to increase the capabilities of their already-amazing Thunderzord arsenal. 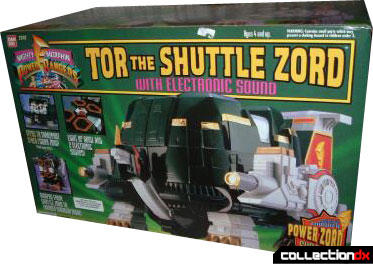 Tor the Shuttle Zord is the final link in the Thunderzord transformation system. Included in the set is the main body, two large cannon arrays, a tree of gold-plated plastic parts, a tree of dull gold plastic parts, a pair of yellow plastic horns for Tor's head, a tree of small transparent red plastic domes, a large sheet of decals, and a page of black-&-white instructions in English only. The pieces on the trees needed to be removed with care so that there were no sharp points from where they were attached. The two Side Cannons snap into position on either side of Tor's body, and the various pieces from the trees are placed all over the toy. The head and neck is retracted into the body, and needed to be pulled out. Once that's done, the final ornamental pieces can be added.

Tor has two modes of operation: 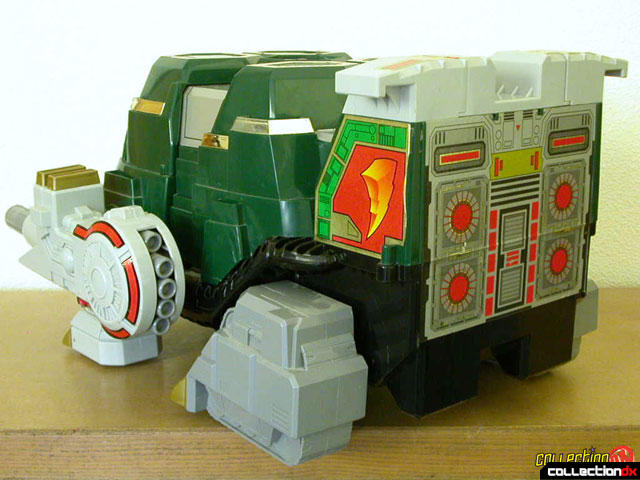 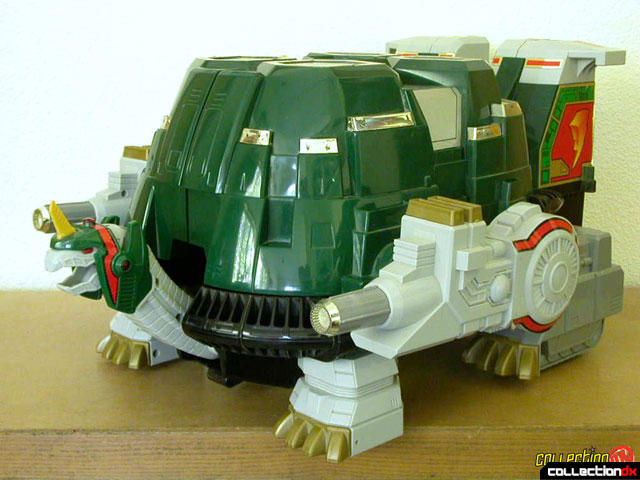 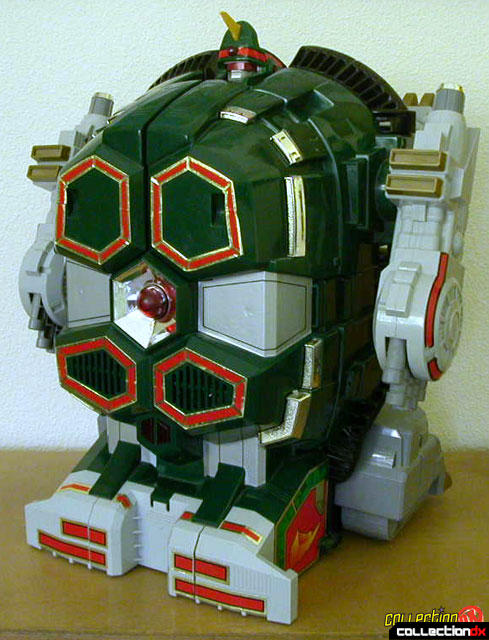 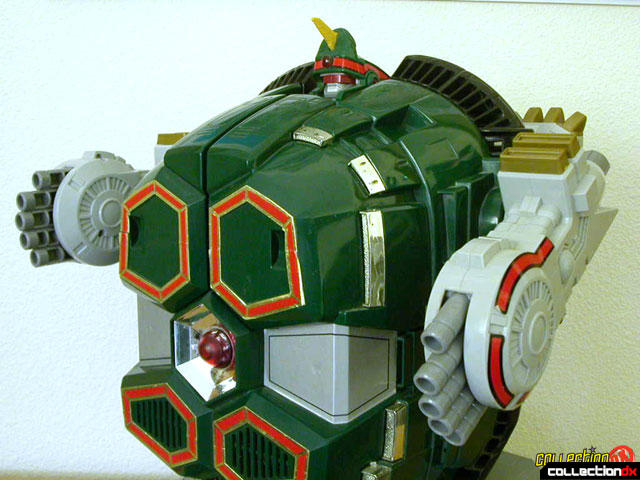 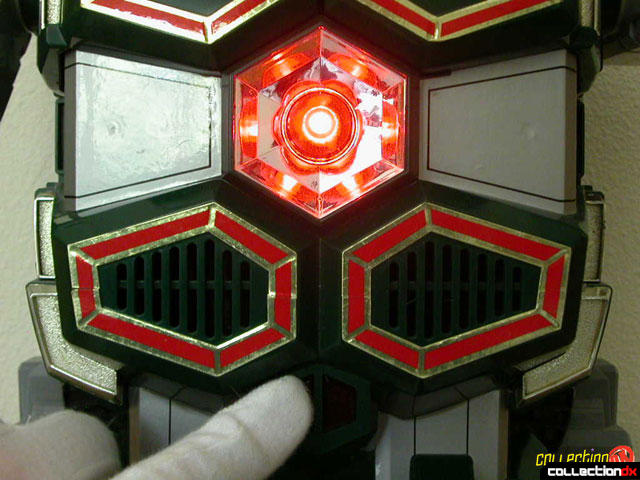 The light-&-sound feature is fully functional in either mode, and is accessed below the red transparent dome. Pressing either button will create either the sound of Tor roaring, or the sound of a cannon blasting; both accompanied by the flashing light inside the red dome. The sounds are quite loud, and last about 1 second each. The flashing effect is increased with the use of silver-plated plastic "mirror" around the red dome, which reflects the light better.

The fun part about Tor is how it can interact with the other Thunderzords in the system. 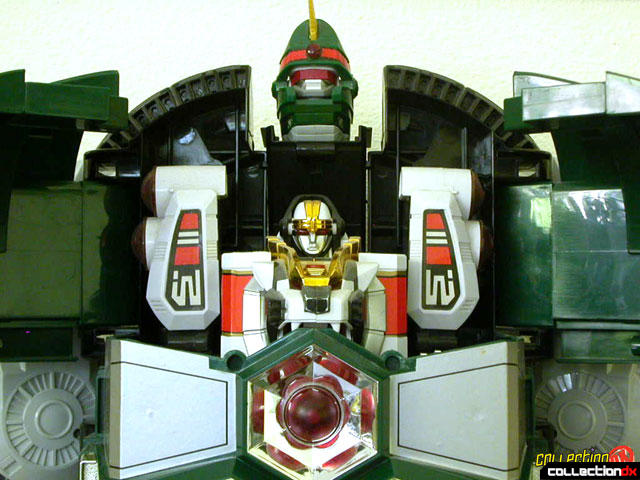 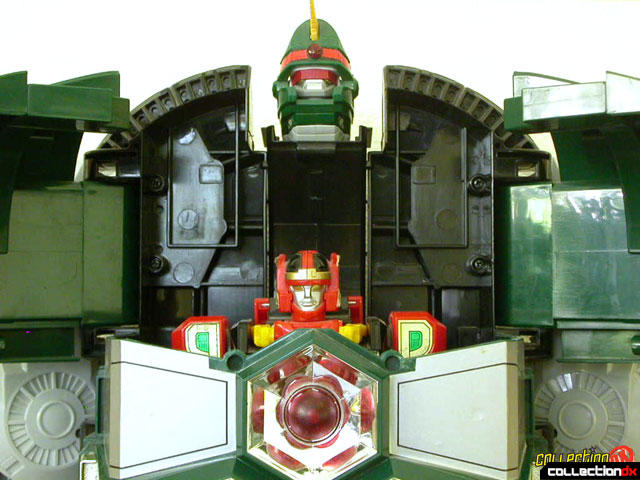 In the upright Warrior Mode, two large doors can be hinged open, and then either the Deluxe Red Dragon Thunderzord (sold separately) or Deluxe White Tigerzord (sold separately), can be placed inside, both also in Warrior Mode. Unfortunately, because of the molding process used, the Red Dragon Thunderzord does not stand very well on its own, and tends to fall over inside. 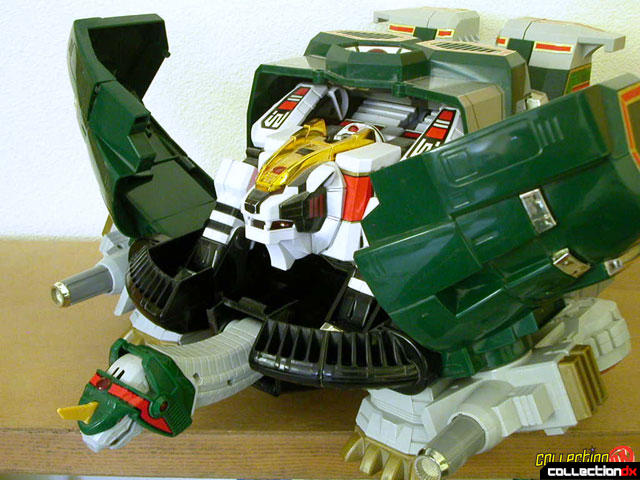 In the quadruped Shuttle Mode, Tor is a little less forgiving. The doors can still be opened, but only the White Tigerzord, in its Tiger Mode, can fit inside. And, even then, the tail sword, and several of the red shoulder domes need to be removed. Fitting the White Tigerzord inside is tricky at best, and takes some work, regardless of what the instructions may say. It's a tight fit, and it immobilizes the White Tigerzord except for its mouth and its own light-&-sound feature.

Fitting the White Tigerzord inside Tor is the first step in completing the greatest Thunderzord assembly. The next step requires taking the Deluxe Thunderzord Assault Team (sold separately) and combining it with the Red Dragon Thunderzord to form the Thunder Megazord's Sled Mode. Finally, the Thunder Megazord is placed on top of Tor, fitting into groves on the top of the shuttle Zord. This completes the transformation into the all-powerful Thunder Ultrazord! 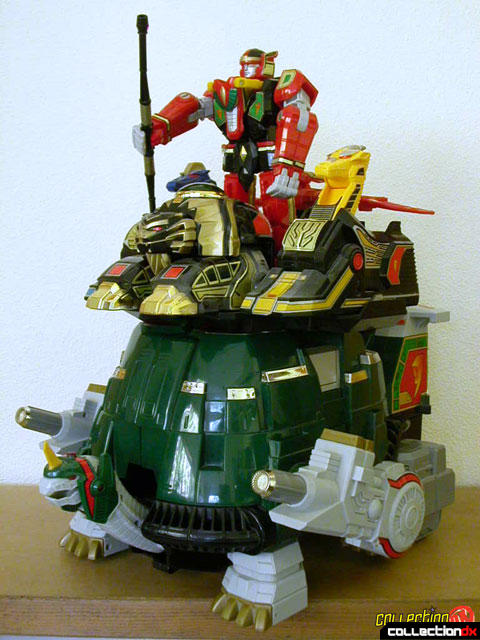 The Thunder Ultrazord is a dead weight. At almost 15 pounds, there is little else to do but roll it along a hard floor, and press the light-&-sound buttons. If you do try to lift it, be aware that the Thunder Megazord is not directly connected to the top of Tor, and it will fall off! The only interesting thing I find about this combo is that the hole in the Thunder Megazord's sled platform allows the light from below to shine through between the Red Dragon Thunderzord's legs. The White Tigerzord is completely cut-off, and serves merely as ballast to keep the Thunder Ultrazord from being too top-heavy.

For those of you wondering what the differences are between the Deluxe Tor
the Shuttle Zord from "Mighty Morphin Power Rangers", and its original Japanese
counterpart, DX Dai Mugen, from "Gosei Sentai DaiRanger" they are few, but
noticeable:

As far as I know, all materials, sounds, and molding remained the same between the two estranged cousins. And since only the small red eyes were painted, there was no change there.

This toy is rather dependent on the others in the system to bring out its good points. It is a carrier Zord, after all, and fits few other roles well. Articulation is severely limited to the door hinges, joints at the shoulders on the large light gray arms, the lower half of Tor's neck and its mouth, and partially on the back feet. The lights-&-sound adds points, but not by much. All in all, he's OK, and he is well suited to his role.

As for the Thunderzord system in general, I seem to have lost some of my interest for it in the years since they aired in 1994, though some - like the Red Dragon Thunderzord and White Tigerzord- will remain close to me.

Three (3) AA batteries (not included) are required to operate the electronic light-&-sound feature, and should be replaced by a responsible adult.

6 comments posted
i'm so happy, i have the

i'm so happy, i have the full collection of power rangers might morphins season 2

Full collection of figures, Zords, what?

Lord Zedd, sure, and I've yet to watch any episodes of Ninja Storm so I can't say about Lothor, but Mesogog? Granted, I haven't yet watched Dino Thunder all the way through, and Mesogog may improve as a villain near the end, but so far the guy isn't very interesting or intimidating...he's just kind of...boring.

As for the Thunder Ultrazord combination, I guess it accurately reflects how it beat the monsters in the show - by crushing them under its immense weight. (obviously not a good idea to do this with the actual toy unless one likes broken Thunderzord parts strewn everywhere)

I felt Mezogog was a villain who was restrained by his situation, not necessarily misunderstood. We see this in the series finale where he is far more aggressive once he separated from Anton Mercer. But despite being stuck in his lab most of the time, I thought Mesogog was a rather intimidating villain; a dog on a leash.

Disney were certanly thinking about their villians at one point, that you can't ignore. When I first saw Mesagorg I was like, wow that is one frightening looking villian, no doubt a few kids had nightmares after seeing him. And although his name isen't too threatening; Emperor Grumm was a real spooky skeleton creature, yes we had Rito Revolto before him, but he was more a form of comedy relief, Grumm was just pure evil. People may complain at how they were adapted but at that point Disney were really thinking about how their lead villians should be and amazingly still these were both American creations.

You could still stick either of the Zords in there in warrior mode (especially the Red Dragon Thunderzord).