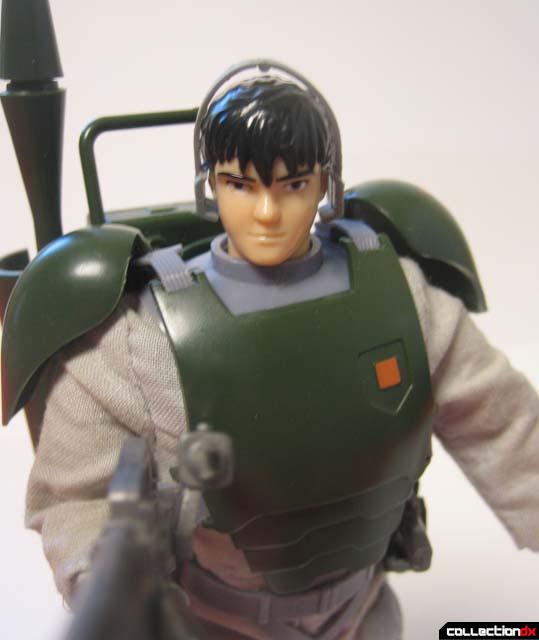 Special Forces Group Spiral Zone was a very short released series of action figures and equipment manufactured by Bandai in 1/12 scale in 1985. The figures were only produced for a couple years and were quite expensive for their day and now rare and highly sought after Japanese toy today. When GI Joe figures went for 2.95 each Spiral Zone figures were $25.00 and in 1986 that was a lot of money. Not many pieces were released with only 12 releases, which were numbered on each box as “Acts”, with Bull Solid as Act 1. Spiral Zone was one of the first hi-brow toys that were geared towards adult collectors rather than children. 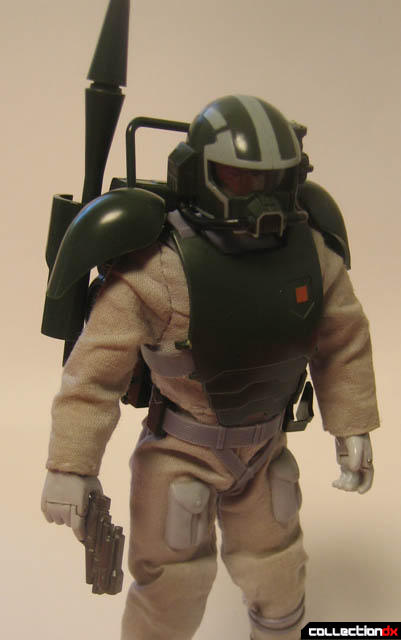 The figures were and still are a sight to behold. The figures themselves were articulated at 24 different parts with the most famous feature being a moveable trigger finger to put in the trigger hole with the laser rifle and handgun. The head was on a ball joint, and the wrists, hands, ankles, all swiveled. The figure itself was one of the first Systeminjection figures produced, which is now a part of most every large scale Bandai model kit release. 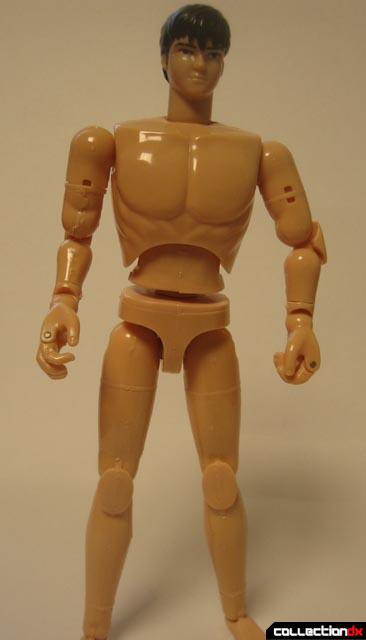 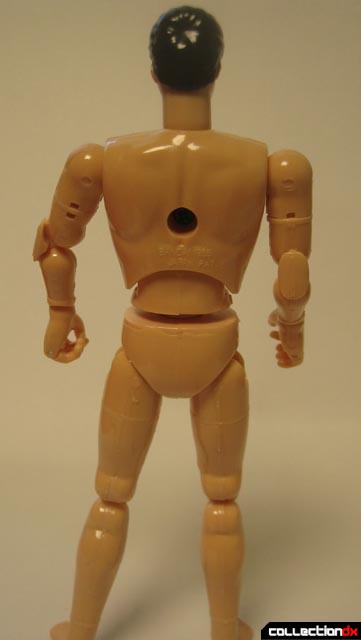 Veteran Gundam and Mecha designers Kunio Ookawara and Kazuhisa Kondo designed the Spiral Zone line. In the real robot era such as Votoms, Gundam, SF3D, and Macross, Spiral Zone fit comfortably in the genre quite well. Kazuhisa Kondo was known for revamping the original robot designs for Mobile Suit Gundam and updated them; one of his most famous redesigns being his Zaku II in the manga of MS Suit Gundam 0079. Perhaps this explains why Bull Solids helmet looks like a Zaku head. 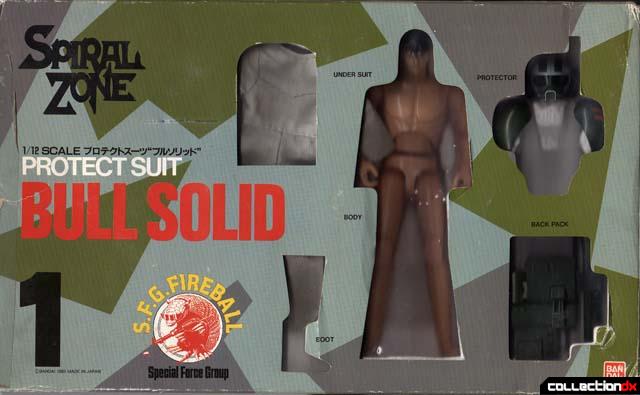 The uniforms were real cloth type and the parts were made with high quality rubber, plastic and vinyl. Clear lens were used for the helmet a rubber hose connected the gun to the backpack. The packaging was a Styrofoam tray with display windows for the toy and a beautiful oil painting with Bull Solid in action that seems to ask more questions than answer them. Most the parts came on sprue runners and had a model kit feel to them when one was assembling the Spiral Zone figures. 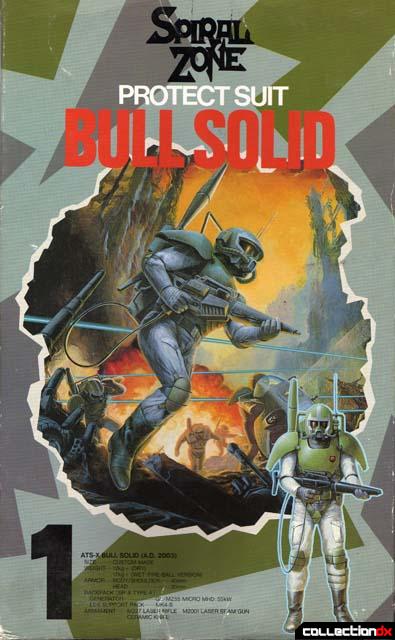 There did not seem to be many bad guys in line more of just a line of future Special operations soldiers, which you could put in any situation that Spiral Zone forces calls for. In a round about way Spiral Zone was a futuristic tribute to Hasbro’s original 1960’s GI Joe line who, besides a pygmy gorilla, had no defined enemy.

The Spiral Zone package consist of: 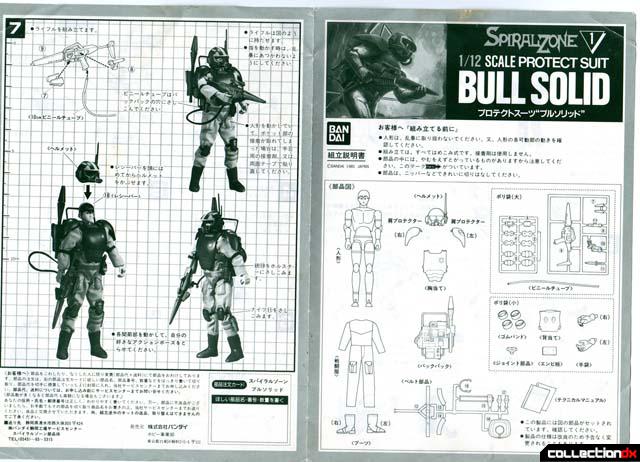 Building Spiral Zone figures is very straightforward. Although following the instructions should produce a great end product, I believe since Bull Solid was the first release there are a couple of engineering problems that if you are not careful you can break some weaker points of the figure. 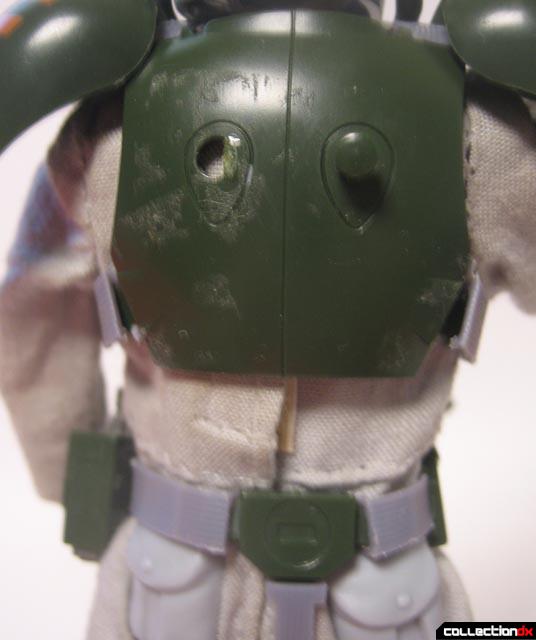 The places you need to be the most careful with is the front and back armor plates and waist belt. If you are not careful you can break the tabs that hold the armor and belt in place. Not only that 25-year-old plastic gets brittle and you must take great care when putting these parts on. Thankfully these weak points would be fixed on Hyper Boxer and Sentinel Bear. Also when putting the backpack on the figure be careful not to damage the pins on the back armor for the same reasons stated above. 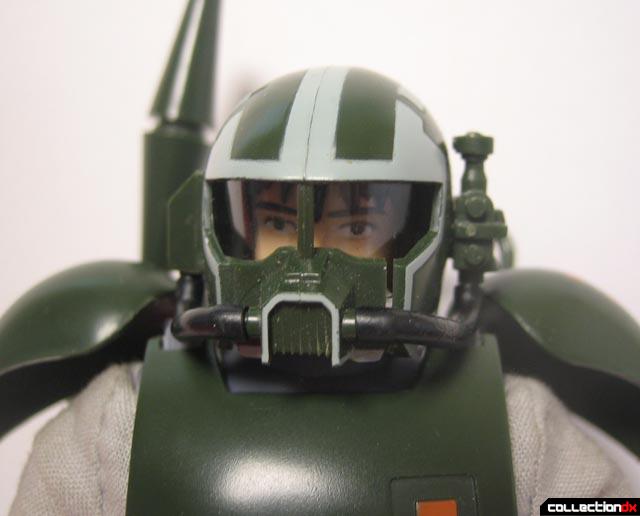 The example I have here is the one I bought and played with all those years ago and reflects some damage that has happened to it. It should have two large antennas on its helmet but those were broken off. Also the rubber bands that hold the arm and leg pads have disintegrated over the years and I still have not found replacements yet. If you are going to purchase one of these figures always make sure the arm and leg pads are included as those are usually missing and usually the first parts lost. I wish I had some good replacement rubber bands as the pads take the figure up to the next level.

My friends little brother also attacked my Bull Solid when I was in school one afternoon and broke off the head, this was finally repaired a few years ago with Yutaka’s own Spiral Zone body reissues which Ninja uses the exact same molds as the original Spiral Zone figures of the 1980’s. 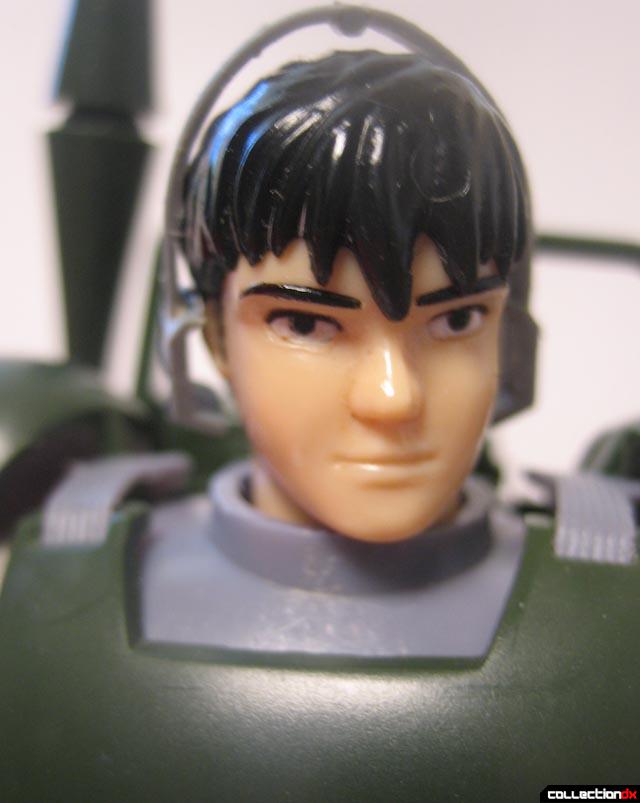 I have always loved the face sculpts of the Spiral Zone line. Bull Solids figure seemed like the average Joe, somebody a young kid could relate to. One great feature was the anime look of the face, which was quite a great feature at the time. Another feature was that you could take the gloved hands off and put on the flesh hands. A drawback of the gloved hands is that they fall apart at the wrist and are built differently than the flesh hands. This becomes a problem when you are trying to put the rifle in both hands. 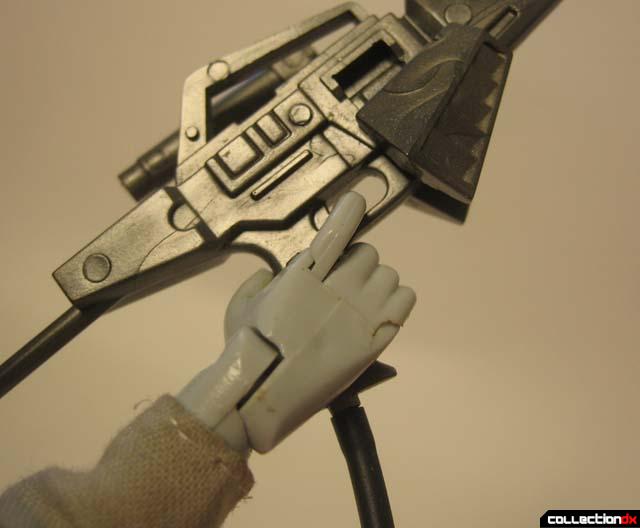 I like the paint stencils on the helmet and armor, it is simple but effective. The helmet sculpt looks great as well with the hose and clear visor. 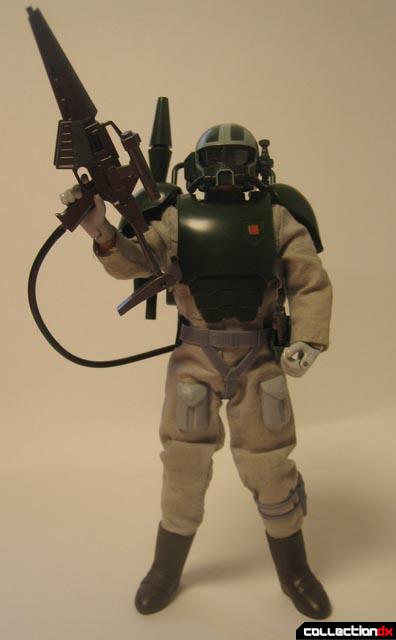 Bull Solid appears to be the light armor of the series and much more mobile than the other two armor types. Although you can get Systeminjection figures to many great poses without the armor, the armor does limit those poses when fully armed. I did play with my figures as a kid but they really seemed to be geared to the model kit crowd to be displayed and enjoyed on a shelf. They are fragile so be careful when posing Bull Solid. Although they are designed to be taken apart and put back into the package, the less you take them apart the less chance you have in breaking or losing many of the small parts. 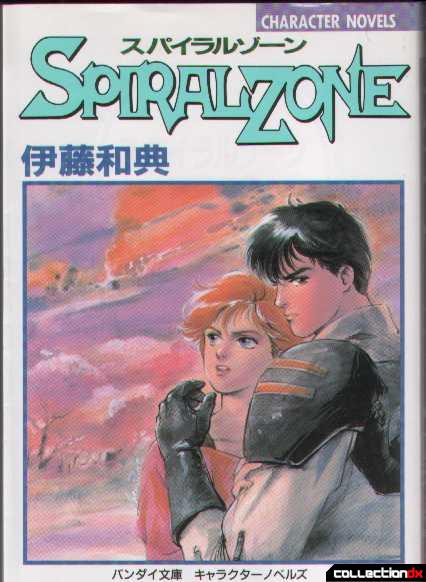 Although a few products hinted at an anime cartoon such as an image album, a game book and a novel, it seems that Spiral Zone died a quick death in 1988. Why the line ended as quickly as it started when it looked like new products were about to hit the shelves is a completely mystery although the high cost of the toys themselves might have been a huge factor. 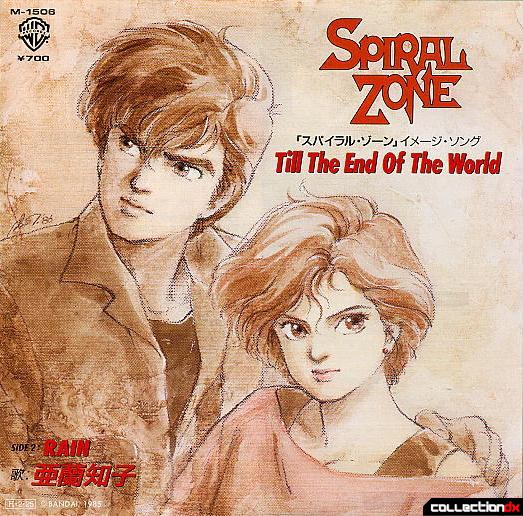 Toy truck company Tonka would get a license to produce the toys in the USA in 1987 they were nowhere as near as detailed as the original Spiral Zone from Japan. Tonka Spiral Zone also died a quick death after one year of production. 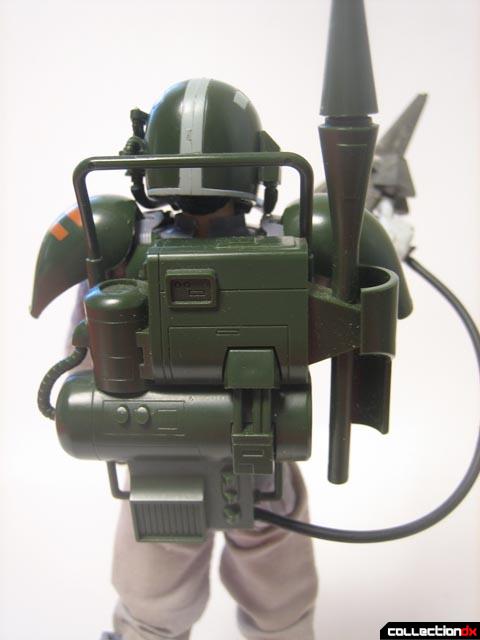 Next to the Godaikin line, SF Spiral Zone is one of my favorite lines ever produced by Bandai. With only 12 releases, and if you have the cash, it is quite an easy line to complete with only one toy, Monoseed being a $300.00+ toy. 30 years later they still hold their value and art design very well and one cannot deny the huge influence of Spiral Zone still has on many of the toys that are produced in Japan today.

Yes! I didn't know that the show was based on these great toys! I wish I had one.

These toys are getting rarer and more expensive every year. While they can be found for cheap sometimes, this is more due to the fragile nature of the figures, and the fact that there are very few truely MISB C10 condition examples, like the rotting rubber parts, the fragile old plastic, and the original figure becoming discolored.

I would warn anyone purchasing SZ figures to be careful. Many unscrupulous sellers offer these as mint figures, when they are missing parts, the rubber is rotten and useless, or the original figure is replaced with a reproduction.

I remember stumbling across these at Pony Toy Go Round sometime in 1984. But considering the price, I was much happier getting Mospeada and Macross toys for the same amount. I never forgot about them though and tried every few years to track some down to no avail. I gave up a few years ago trying to acquire some of these. The price, rarity, fragility and lack of communication with Yahoo Japan sellers just makes it too risky. They are practically non-existent outside Japan, and if you do find some, they're either crap, overpriced, or overpriced crap. Unless you don't mind some rot on them, getting one in perfect shape is almost impossible. But if you enjoy hunting down stuff and are willing to pay a premium for it when you find one, it's right up your alley.

The line has an interesting history and is one of those where the unreleased stuff that was planned is heartbreaking when you see what never came to be. I always hope one day Bandai will revive the line, since it's right along the style of SIC and all the Kamen Rider stuff they do.

I was one of the few kids into the Tonka ones, which were pretty damn good considering it took these fragile model kits and redesigned them them for kids, you just can't make something so fragile for a 6-10 year-old boy.

Both of you have good points when collecting Spiral Zone toys. One stunt that I see often is when they subsitute an original Spiral Zone figure with a Yutaka figure. The arm and knee pads are the worst offenders as they are usually missing from auctions. The rubber on the boots is good, but what happened is that they had a chemical reaction with the styrofoam and melted in the tray. I did buy an NOS Setinal Bear for my DX review that was untouched but the boots had melted through the tray like a hot knife through butter. I suggest pulling the boot sout and putting them into a baggie. Dealers also love to overprice Spiral Zone toys just because it's a spiral zone toy.

Luckly I bought most of my Spiral Zone toys when they came out at Pony Toy Go Around in little Tokyo in downtown LA. I'm now only missing 4 of the 12 toys.

When the Tonka release came out I absolutely hated them, it was just another example of American toy companies and their lawyers taking all the fun out of Japanese toys. keep in mind that the American Spiral Zone was a completely brand new figure and only had a concept relationship with the original spiral zone toys.

Years later I changed my mind on that view. for those that don't know about the original Japanese SZ toys and compared to other American toys at the time it was a well made line. I like the grey spliter camo on the Tonka Spiral Zone and I can now see why kids liked the figure at the time. But having known about the Japanese line I was disappointed at the time.

Please review the rest, man. I've only seen & handled this one in person, and I'd love to know more about this line, it's like a great mystery for me and many others in the US/English world too.

Thanks, I plan to review all the figures and accessories I own. Click On "Spiral Zone" in the header and check out all the other Spiral Zone related figures including my review of Act 3: Sentinel Bear and kamen Rider Black.

...I just can't get into that...I'd rather watch the Bionic Six!