So apparently there's been some great call for a review of the Shogun Action Vehicles Sky Arrow? Well, here it is!

The first thing that comes to mind when I think of this toy is just how common it is. When I first acquired one at the 2012 East Coast Chogokin Summit, I was also given the original shipping container. Later, a friend would give me another one to help me fill out the box. I never did fill that box because I ended up purchasing a full box later on. I remember being excited by this until I was told by Sanjeev that "everyone has a box of Sky Arrows". Now, he was being sarcastic but the point is that this is likely the most readily available toy in the Shogun line. At one point, I owned 8 of these and amusingly, at the time it was the only die-cast toy in my collection! 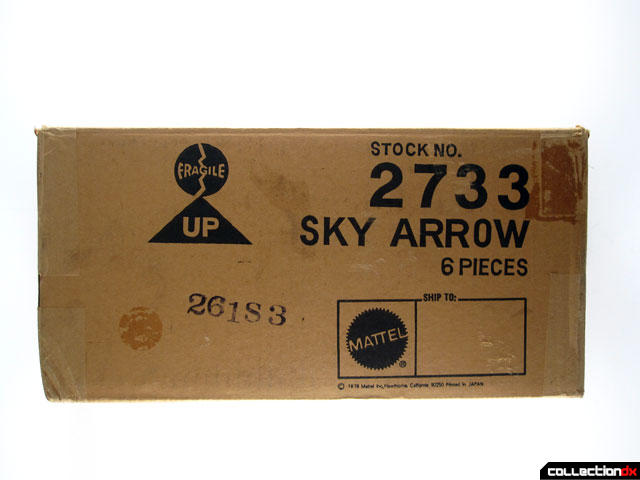 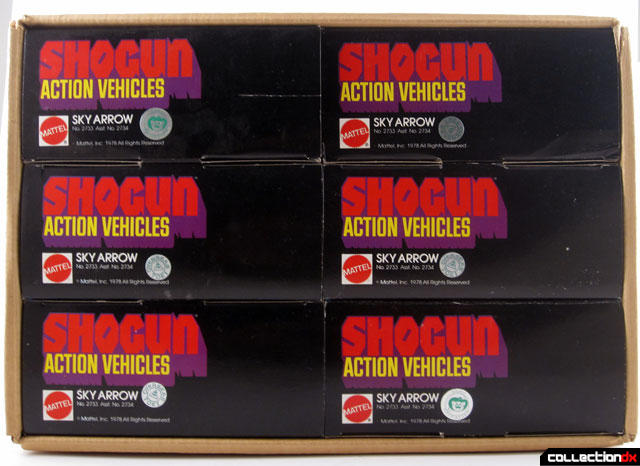 So what about the toy itself? Well, it is a representation of a vehicle from Danguard Ace and is a re-issue of the Popinica PB-02 from Popy. It measures approximately 5.5" wide by 5" long. Much of the content of the toy is die-cast, but there is significant plastic as well. The main body of the vehicle (the white parts, minus the wing tips and the blue underside) is die-cast while the remaining red parts are plastic. 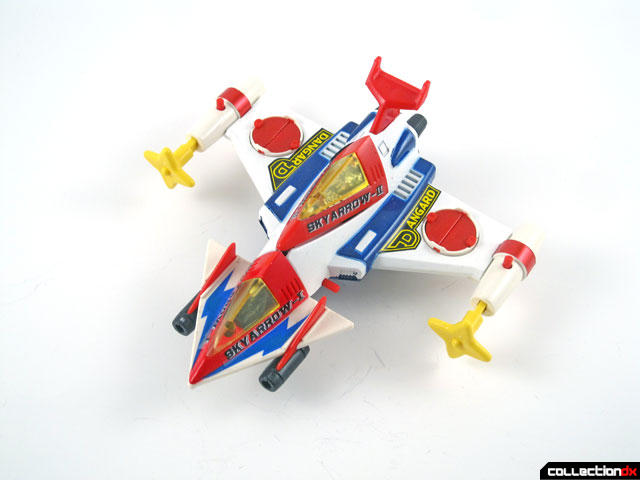 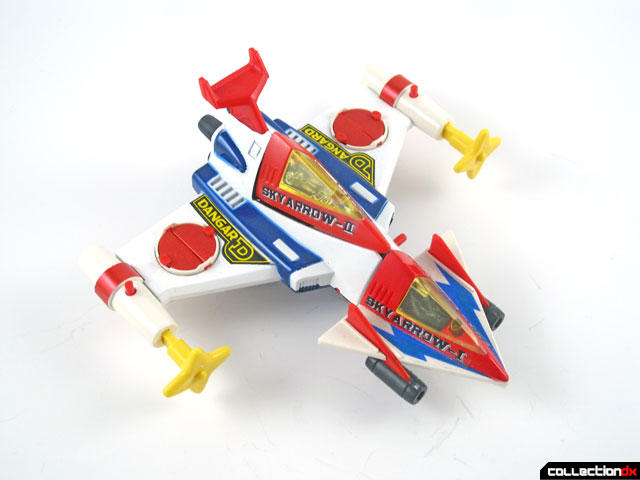 Sky Arrow comes equipped with a few different gimmicks to add to play value. The simplest of these is the opening vertical lift spinners. These are the small red circles on the wings. Although I have only the right side of each raised, you can lift either side, or both. 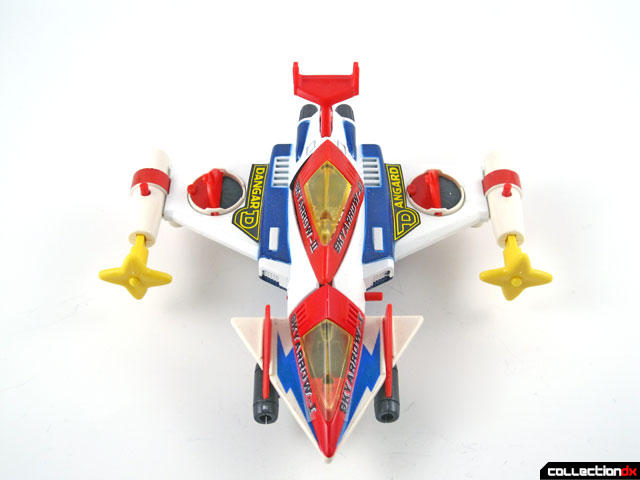 Sky Arrow can be separated into two completely separate vehicles, Sky Arrow I and Sky Arrow II. Sky Arrow I is simply the front cockpit which can be fired off with the touch of a button. The entirety of this piece is all plastic, which makes sense since a lighter material will allow it to fly faster. Sky Arrow I has a molded plastic pilot in the cockpit. 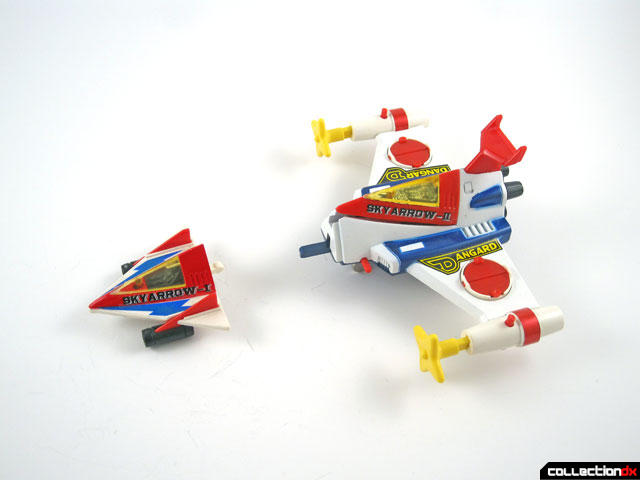 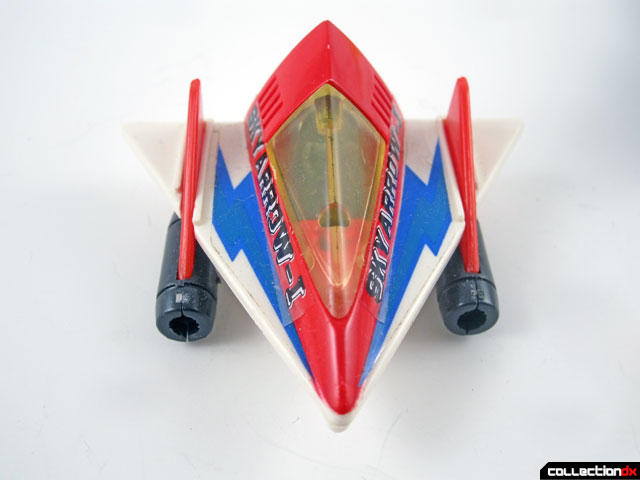 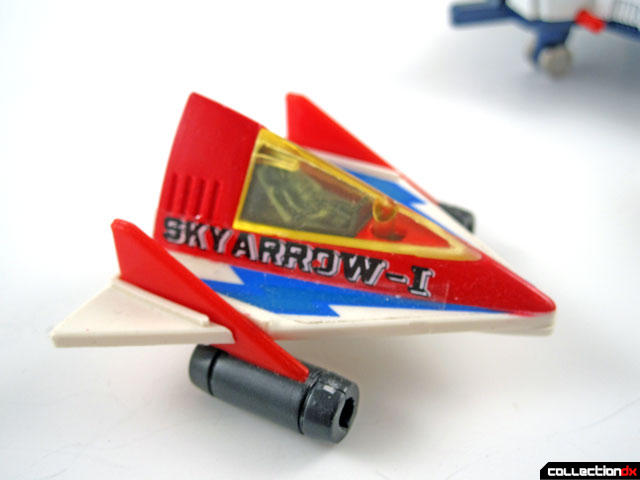 To form Sky Arrow II, you lift the rear cockpit out of the main body and move it forward using the swinging metal hinge it's on to where Sky Arrow I used to be. 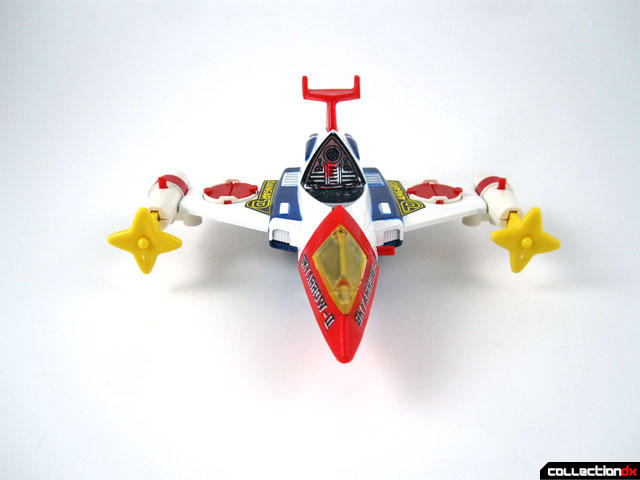 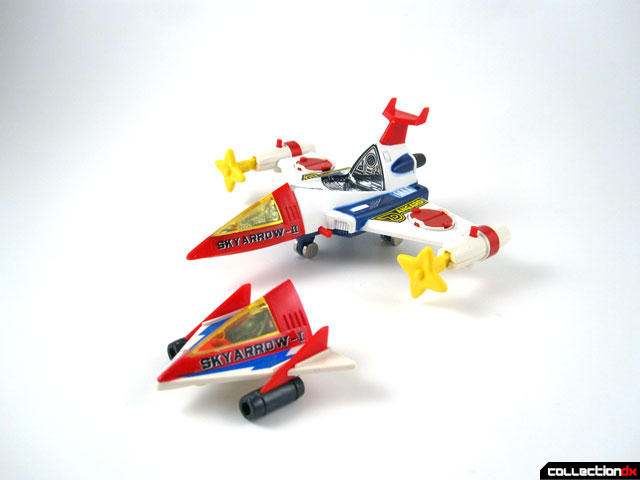 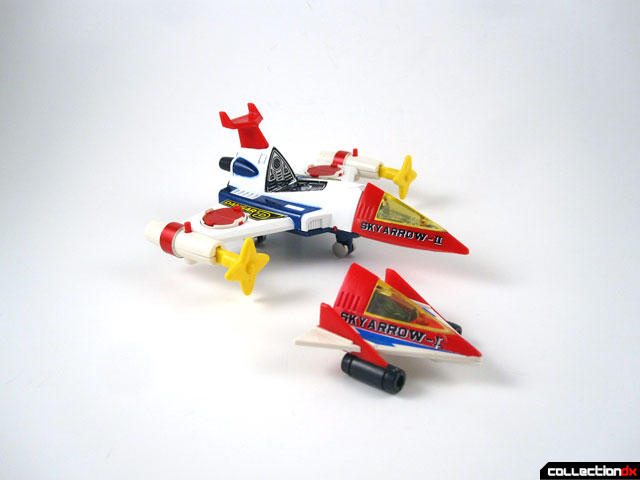 You rarely see this toy shown in this form, which seems to be a shame in my eyes since I think it looks much nicer this way. I sort of think that it would be a more popular item if this form of the vehicle was shown on the box. 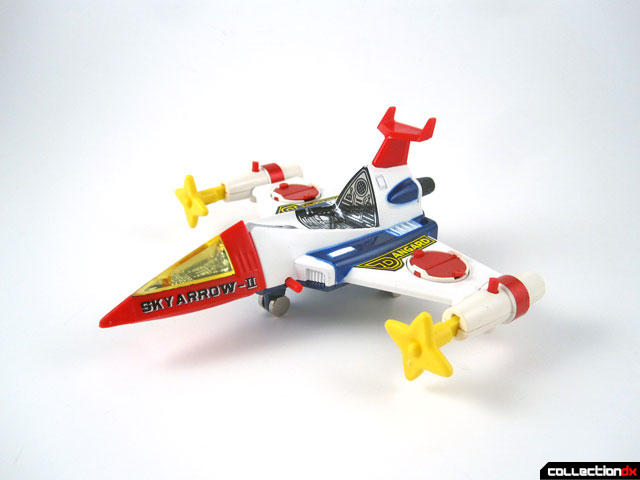 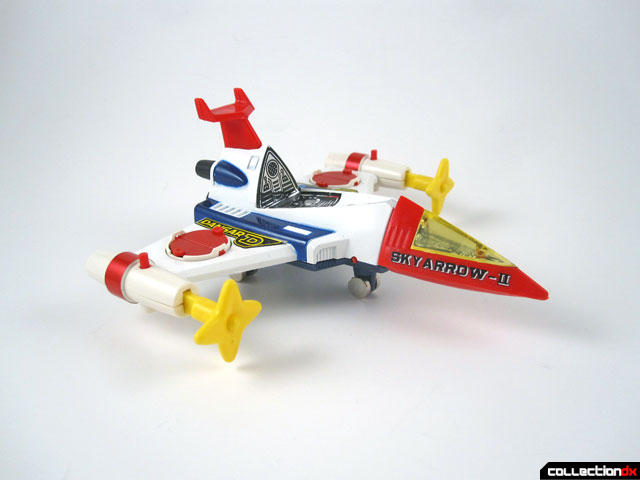 There is a nice foil sticker placed in the area where the cockpit formerly was, which I think it a nice detail. 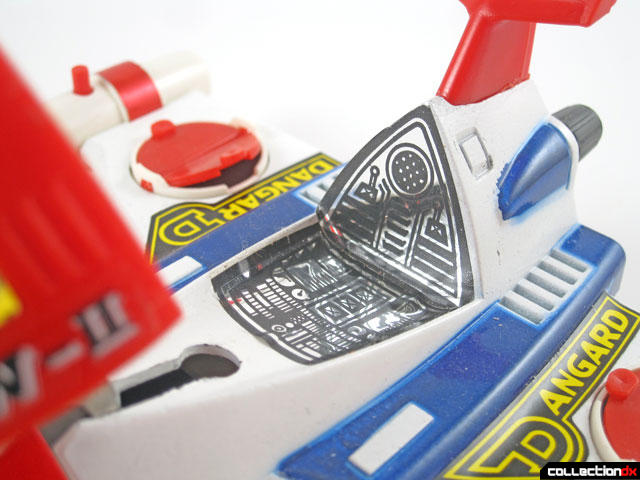 The cockpit of Sky Arrow II has a sticker of a pilot on it. It's not quite as nice as the sticker of Duke Fleed on the Popy Jumbo Machinder Spazer but it's still a nice touch. 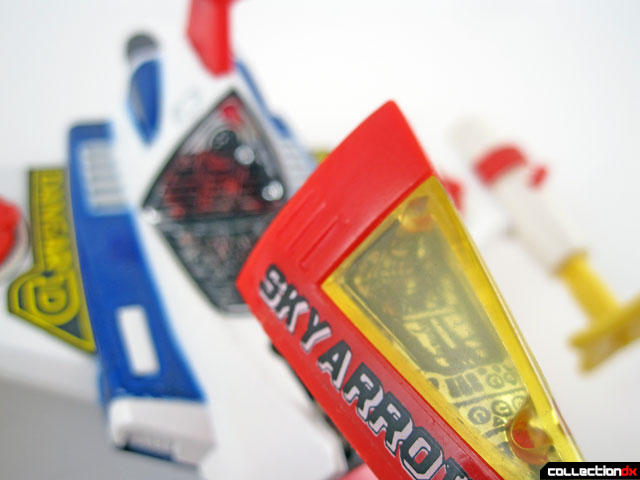 The last gimmick is the most obvious and standard of the bunch. Of course, it fires missiles from the wingtips. This particular specimen (and all the ones I've owned actually) is the second version with the redesigned missiles. The original missiles, which can be seen on the front of the box, were the thinner, rounded type but this one includes missiles that feature a much less attractive "star" design at the end. This was a safety feature that Mattel added after the unfortunate choking death of 4 year old Robert Warren on a missile from a Battlestar Galactica toy (also released by Mattel). You can tell which version you are getting by the sticker on the front of the box that reads "Redesigned Rockets Inside/Rockets Shown Not Included". 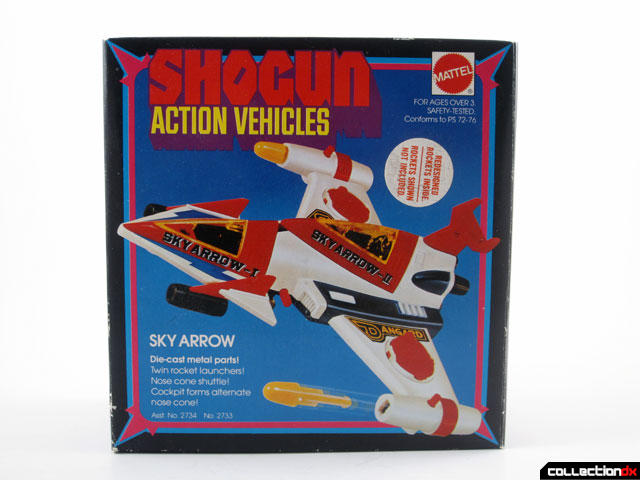 The rest of the box is standard Shogun fare. 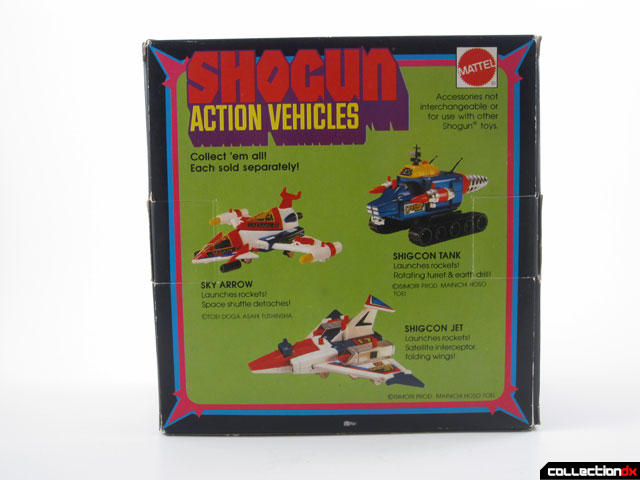 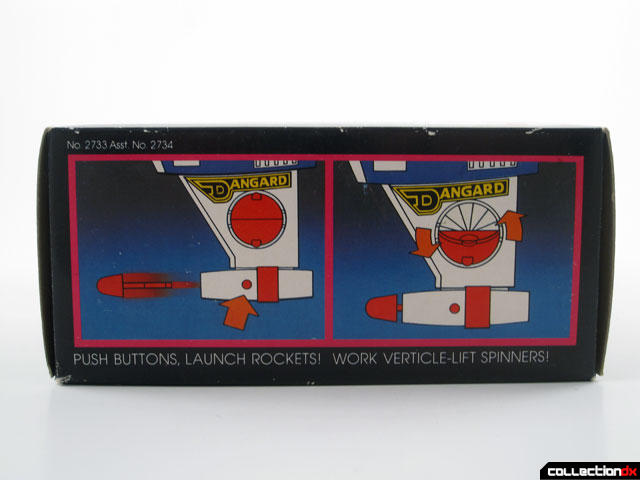 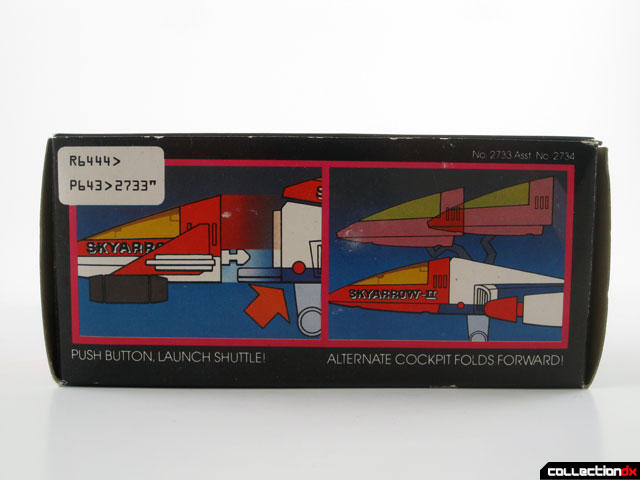 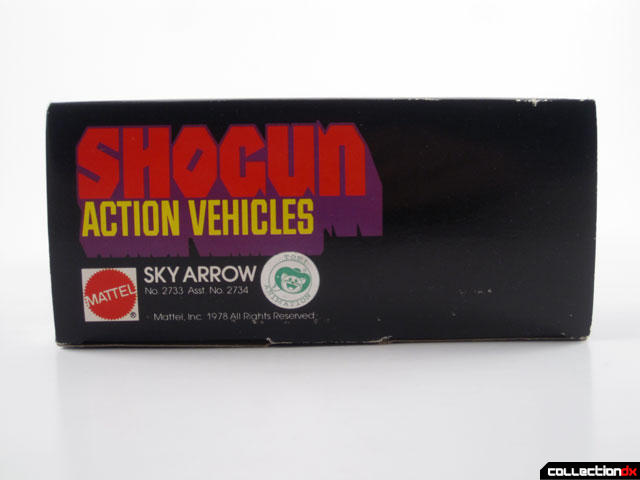 4 comments posted
Does yours have the hair

Does yours have the hair trigger for the launching jet? You so much as look at mine the wrong way and it goes flying off.

One of the orange Lego Galaxy Force jets has the same "rear cockpit becomes forward cockpit" transformation. I wonder if it's an homage to Sky Arrow, or just parallel designing.

Yeah.... I'm pretty sure mine has the hair trigger cockpit syndrome also.

So do we know for certain that Mattel actually released Sky Arrows with regular missiles and not the "safety" missiles? Every one I've seen, even when they were on the toy shelves back in the day had that redesigned rockets sticker and the stupid star missiles...

And thanks for the review - a long time coming! Everyone may have a "case" of these things in their collection but that doesn't take away that it's a pretty cool toy.

I only opened the one I reviewed and while I wouldn't say it launched from looking at it, it was pretty sensitive, now that you mention it. And yeah, I don't recall seeing any with the standard missiles, but again, I've only been paying attention for a relatively short time. Someone with a longer track record than myself would probably have to answer that one.