The Horror Of Party Beach

Who could ever have imagined such a thing? It's stuff like this that makes it still fun to be a toy collector. Produced by Executive Replicas, this figure comes to us via the good folks at Amok Time.

Needless to say, it's the wackiness and obscurity of the character that makes this so appealing. This is not the same old thing and the very fact that it's been made gives hope to b-movie fans that other characters with, shall we say, less than mainstream acceptance may one day adorn our shelves. 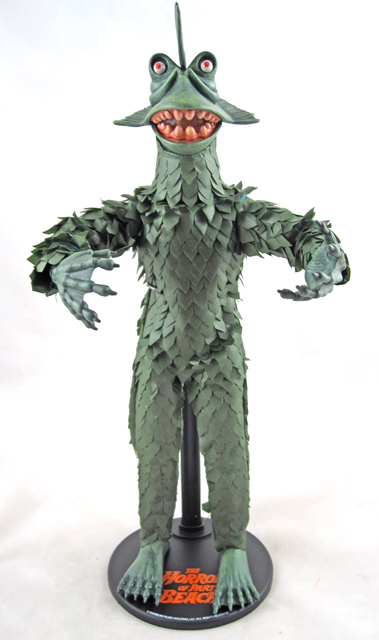 But is it a good figure? I think it is. First off, it's actually bigger than advertised. It's really closer to 14" to the tip of the fin on the head. Much of this difference is likely due to the elongated neck and large head, as otherwise it seems to be a standard 12" figure beneath the suit. 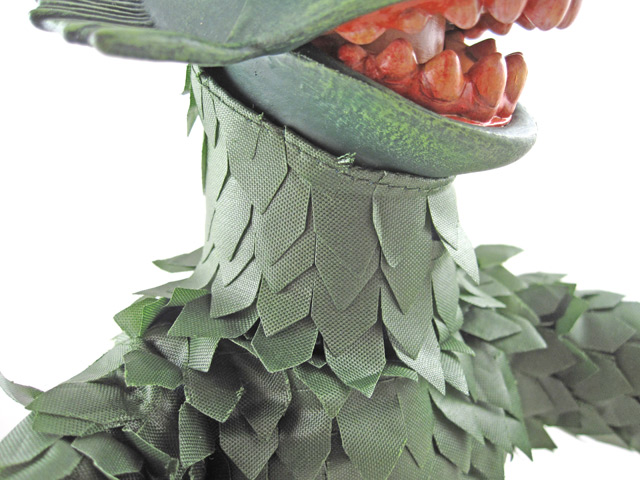 Articulation is typical for figures of this type, but the important thing is that the suit doesn't hinder it hardly at all. All the limbs and torso move as they should and hold their poses. The only place that the design limits poseability at all is the neck, and even here it's not a big drawback. It feels like the head is on a ball joint and it rotates freely horizontally. Vertically movement is a little restricted, making it difficult for the creature to look down. But I suspect the same was likely true of the poor sap who had to wear the suit in the movie! 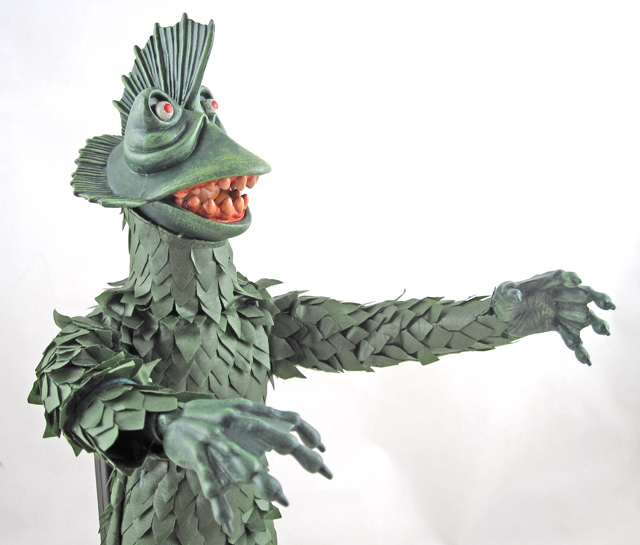 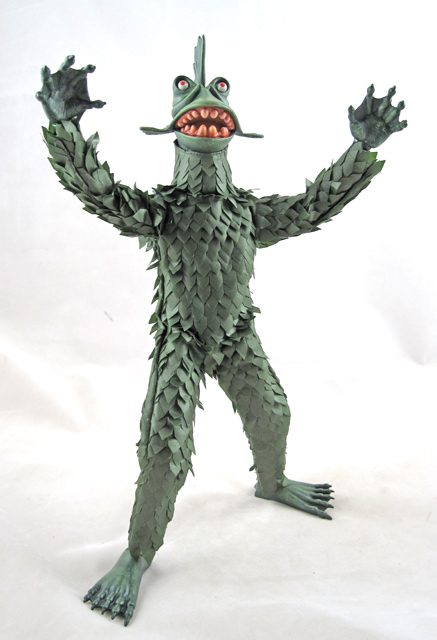 In fact, that's one of the funny things about a figure like this. If the original suit had it's shortcomings, does it detract from the figure if the toy does too? Although I don't have any great recollection of the specifics of the original costume, I'm about to point out a couple of things that, on any other figure, might have seemed like a negative. But on a figure of a character like this actually seem to lend to the fun quotient.

At times in the past, I've been pretty critical of figures who's suits do not entirely cover up the base figure, particularly when it is the wrong color. But here, I can totally imagine that the original suit may well have had the actors ankles exposed. 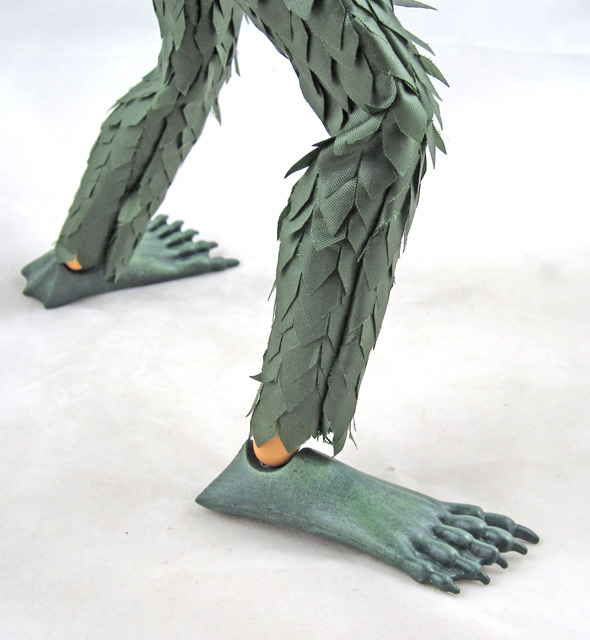 Did it really? I have no idea. But it makes me chuckle to think that maybe it did. Regardless, you can easily tug the pant legs down a bit to cover that up, but it may rise again in posing the figure. Next, one of the great cracks about these cheap old monster movies is that you can "see the zipper running down it's back". Well, whether you really could or couldn't in the movie, you definitely can here! 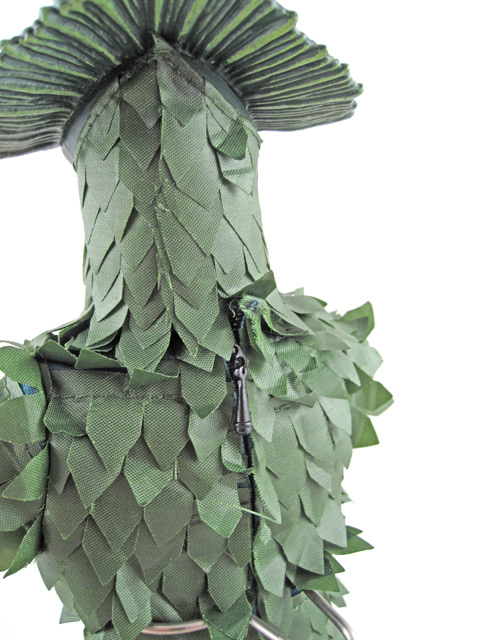 So, I suppose you can either let these things bother you...or make you laugh. I'll chose the more lighthearted reaction.

As for the rest of the figure, the suit is very well constructed and pretty unique for this type of figure. I'm not 100% sure what the material it's constructed of is, but it does a wonderful job giving it that "sea monster" look and appears pretty accurate to the movie. Furthermore, the sculpt and paint on the head, hands and feet are all top notch. The figures includes a typical stand with the name of the movie printed on it. 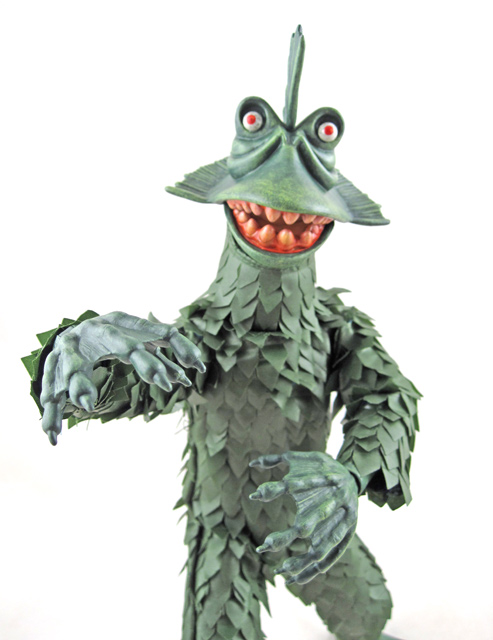 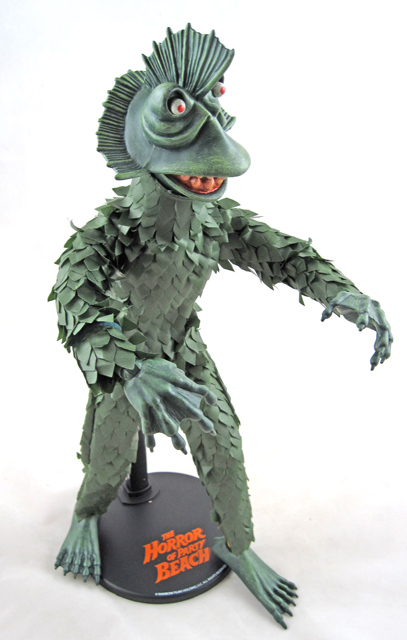 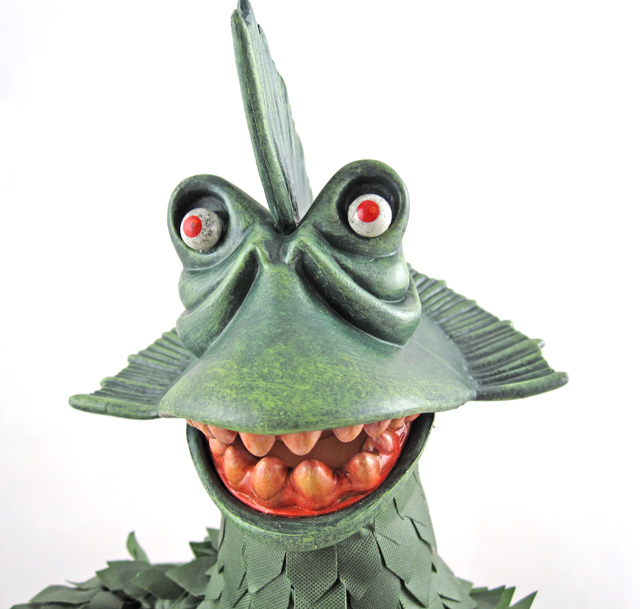 Packaging for the figure is similar to most 12" figures, with the figure resting in a plastic tray and secured with ties. Unlike many similar monster figures, the original poster art is shown in the inside flap rather than on the cover. I'm not sure how I feel about this. I tend to prefer the consistency of having all the posters on the front, but I think I understand why it was not. As you can see, the poster has a giant tag-line, with the title not very prominently displayed. Instead, a still image from the movie was placed on the front cover, with the actual toy in the foreground. It looks nice, but just...different. Also, the inner tray features an image of one of the monsters victims from the movie. 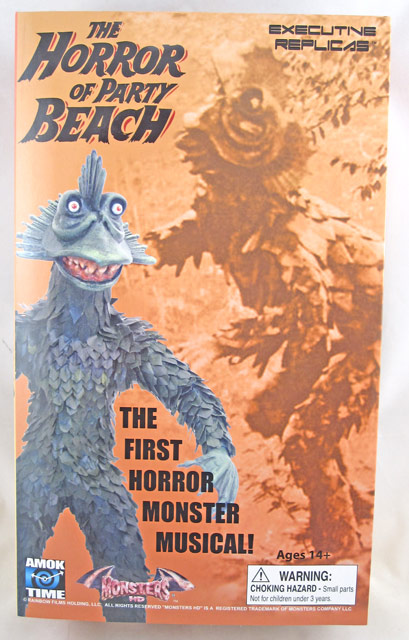 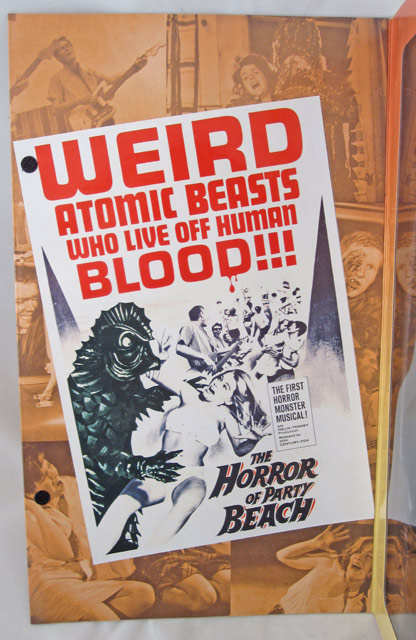 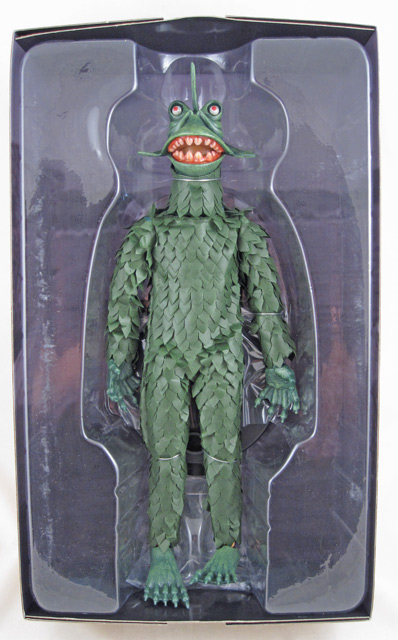 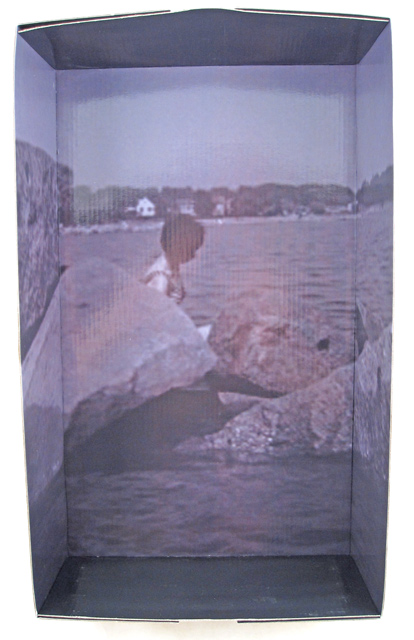 The Horror Of Party Beach is a great figure of an obscure, but lovable character and seems to me to be a sure hit with hardcore monster fans, but it's probably not for everybody. It's appeal, and therefore it's production run (500 pieces), may be somewhat limited. I think the obscurity of the character may be both it's biggest drawing point and biggest weakness at the same time. But if you love to see unusual characters made into toys, I highly suggest you support stuff like this. You can do so at Amoktime.com. 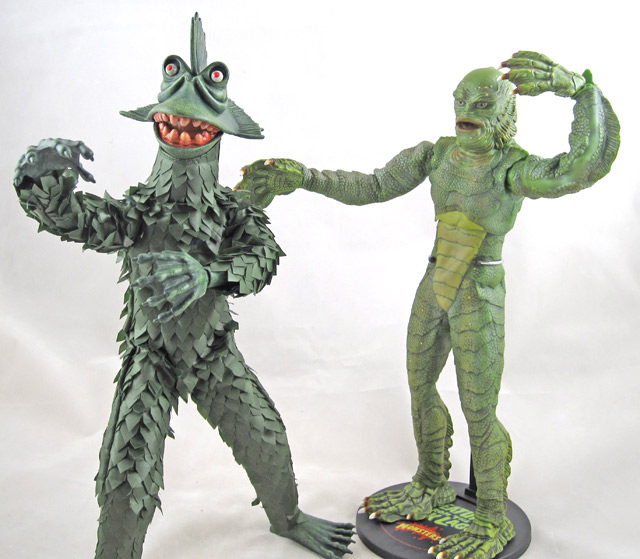 "Who goes there? More tasty humans?" 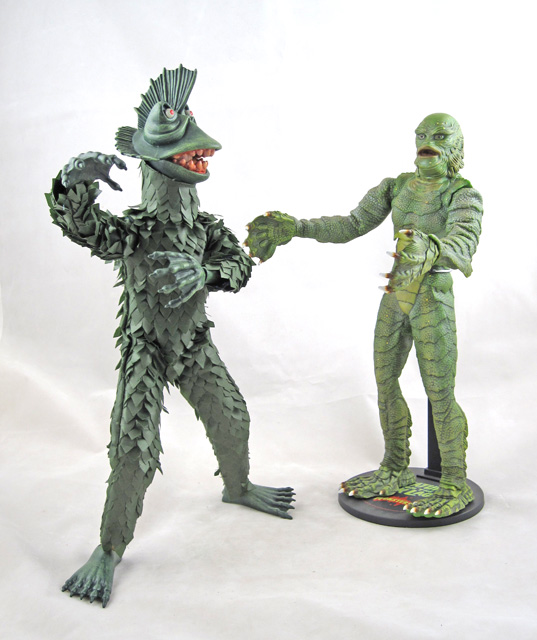 "Yes! Another water monster! He'll know how to PARTY!" 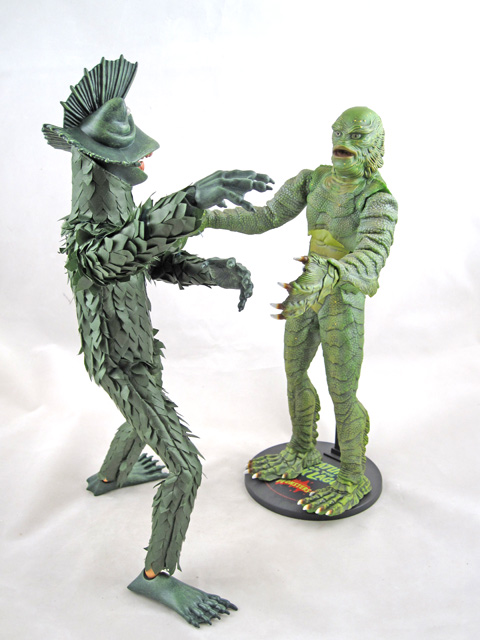 This is great, I bet the soundtrack was awesome!! I never heard of this guy but he seems like an old friend already!

The creature's attack theme is an extraordinary deluge of jumbled brass hellscreams. It was recycled into a science video whose name I cannot remember and thus flared into mindlife when I happened to see this tremendously awful attempt at entertainment. Watch it for the attack theme, stay for the long pursuit of sodium and ominous intonations of ill portent from old black ladies.

I don't know much about this stuff or these types of toys, but the zipper on the back and revealed ankle are hilarious! I'm really digging the texture that this guy has on his costume.

Thanks for reviewing this guy. I've been pondering picking him up. He seems quite good. I'm not super fond of the pricetag though. Amok Time has had a lot of cool stuff coming out in recent years.

these 12" dolls of monster films seem real cool, by the way, I checked out their site.. they have a preorder for Blacula!! awesome

I can't believe I didn't think of this before, but the reason for the pants riding up the ankles is obvious...he's got high waters on! It all makes perfect sense!

Wait, so basically this is an action figure...wearing a small costume? Can anyone say AWESOME!!!