Just as quick as it came, it was gone. The 2013 Summit was a tremendous success, with the biggest turnaround yet.

Hordes of toy fans gathered at CDX HQ for an afternoon of toys and food. Check out some of the highlights below.

The weather could not have been nicer. It was the perfect temperature, with lots of sun. 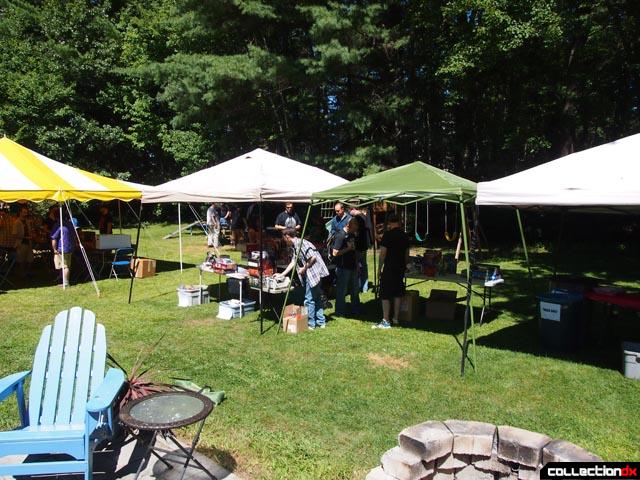 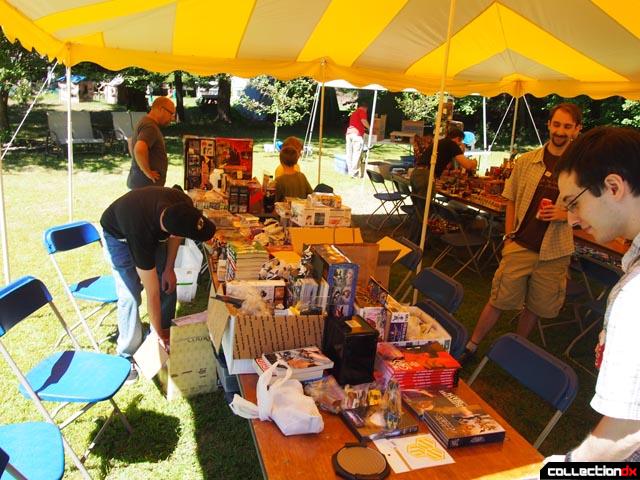 We had about 15 tables of toys set up. 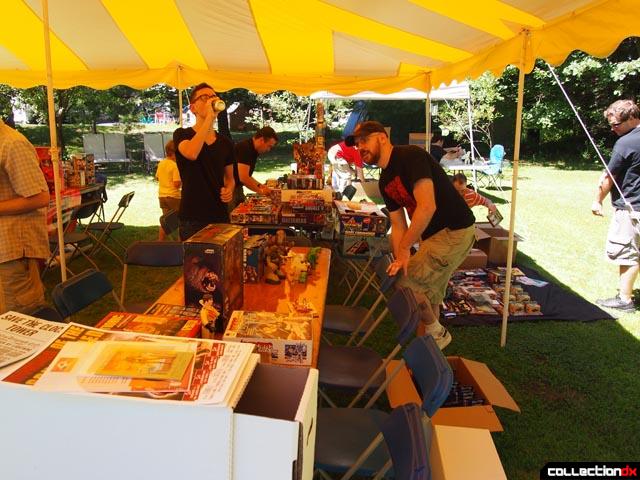 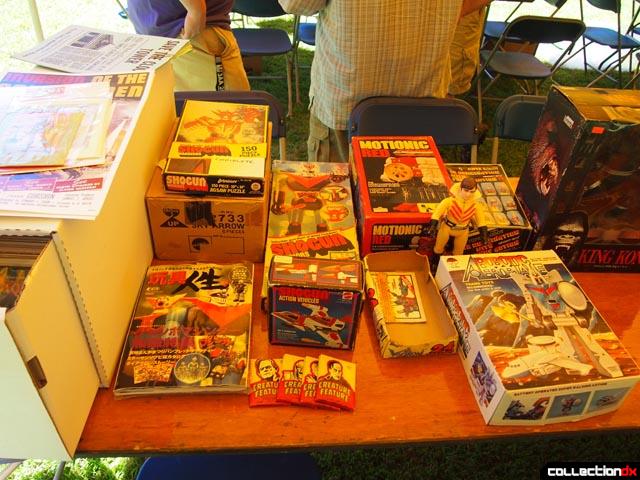 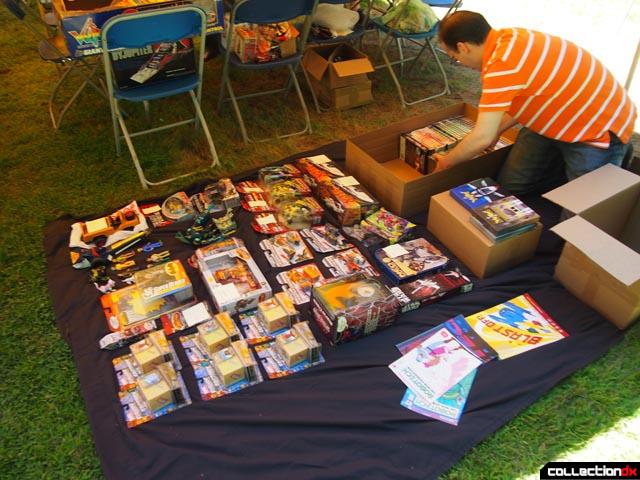 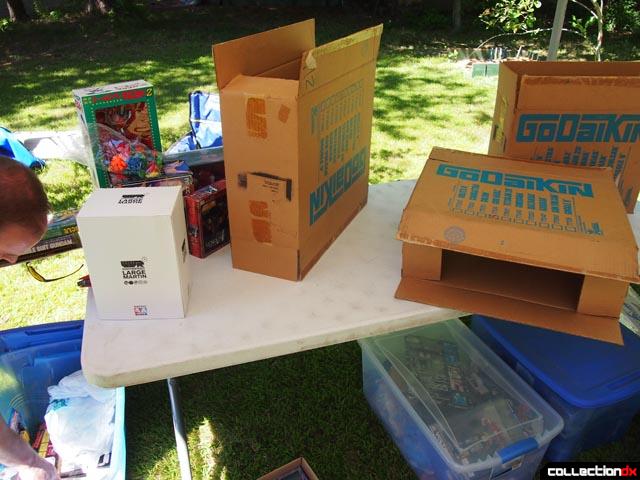 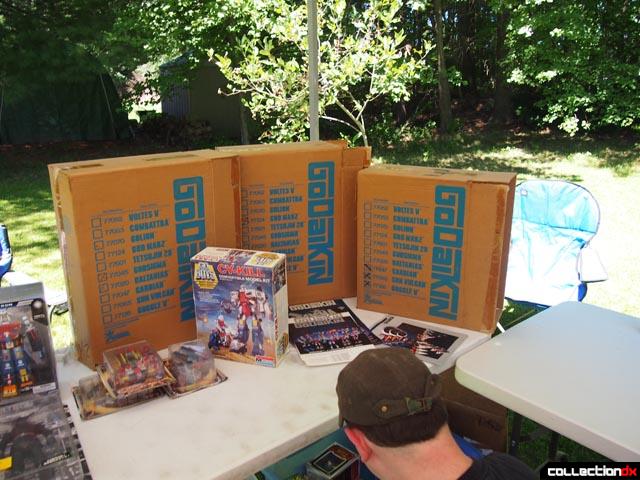 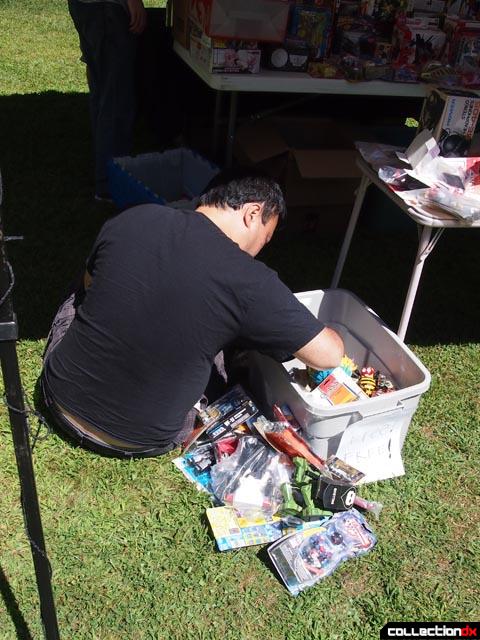 Food was from Lester's BBQ in Burlington MA 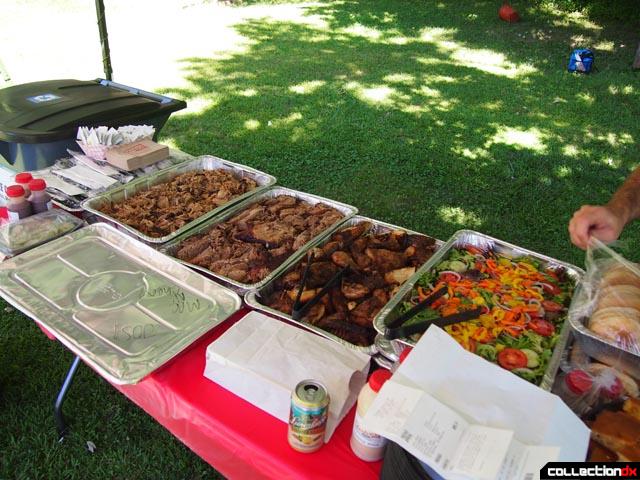 2013 was the year that collectors became makers. 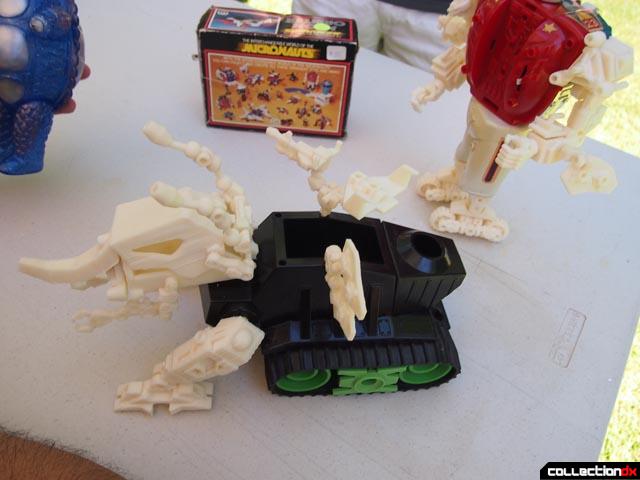 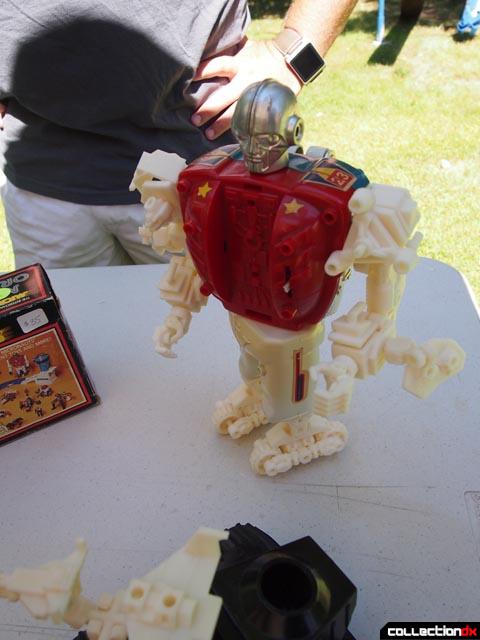 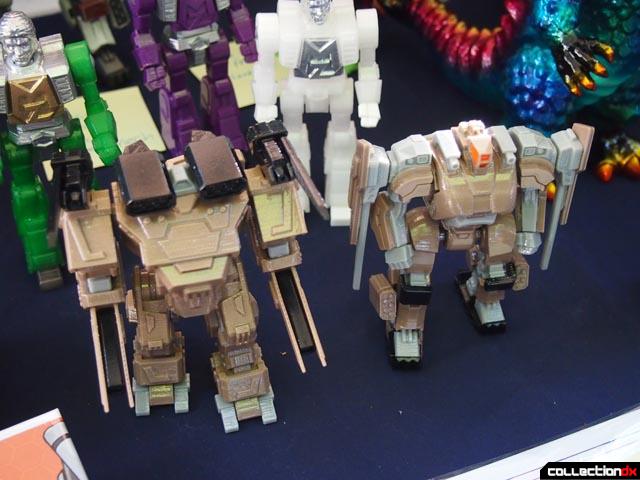 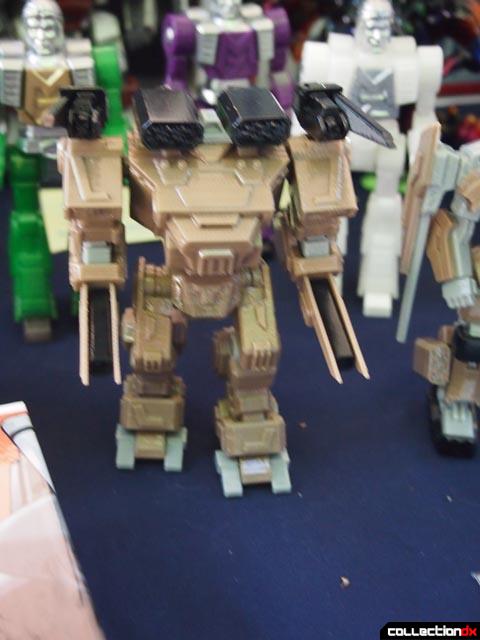 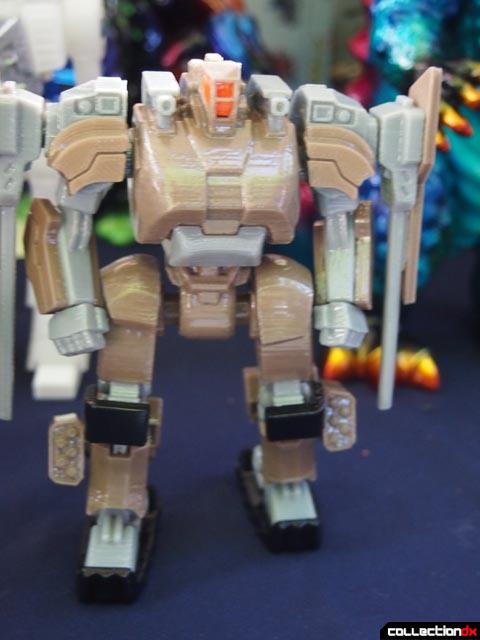 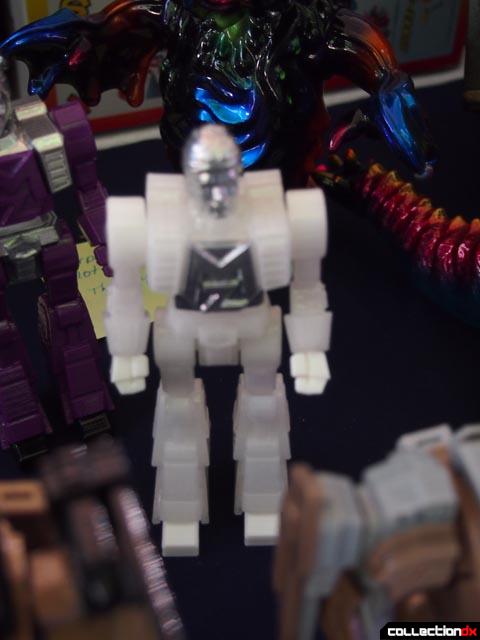 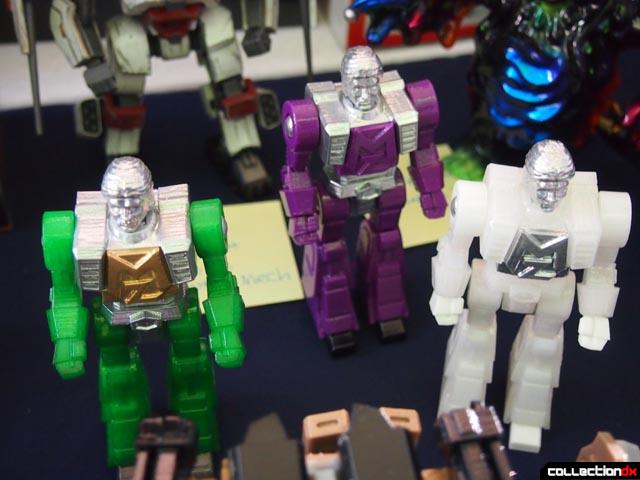 Sanjeev (http://brownnoize.blogspot.com) brought his reproduction Diaclone Powered suits, including some scaled up to fit Microman. 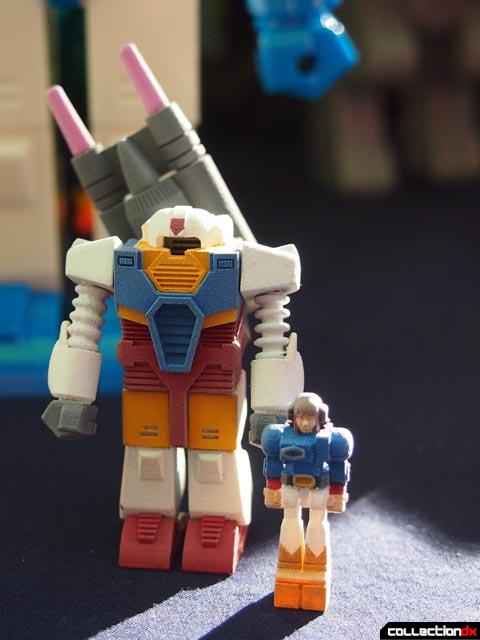 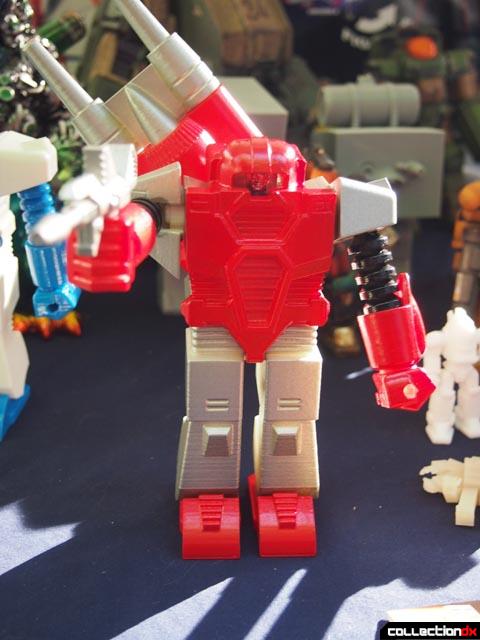 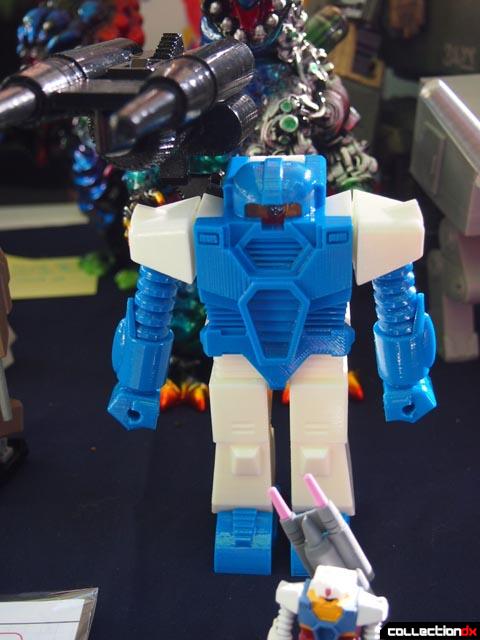 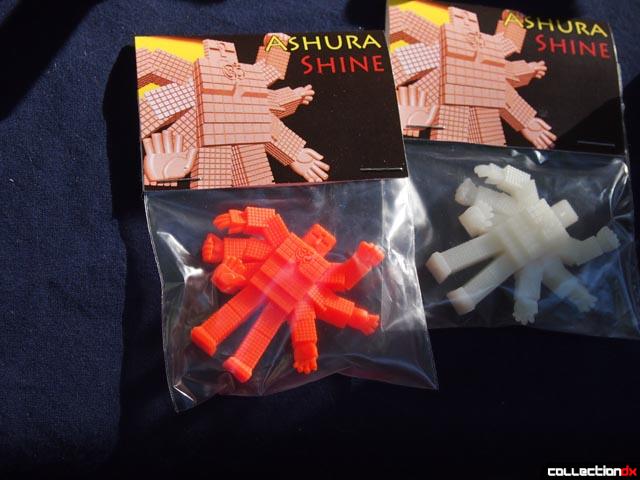 Ben (Prometheum5 http://prometheusrising.net/) had his custom mecha, both painted and in their raw form. 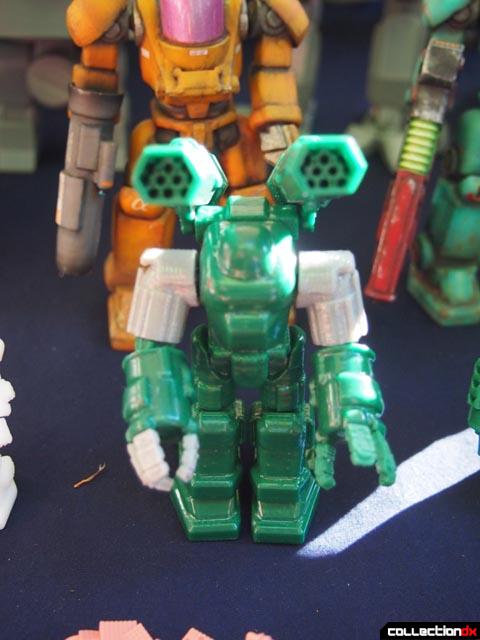 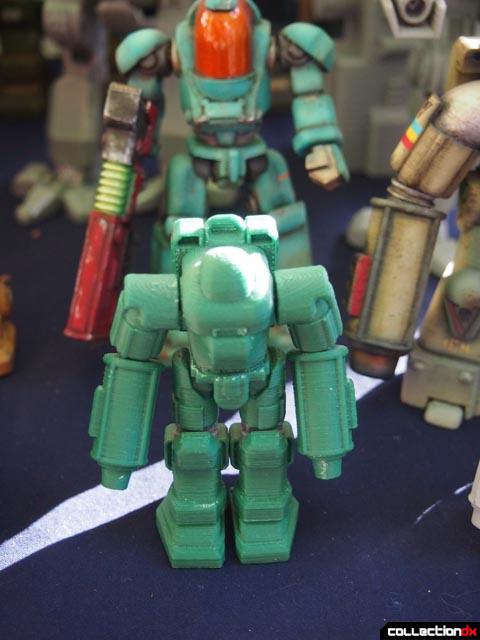 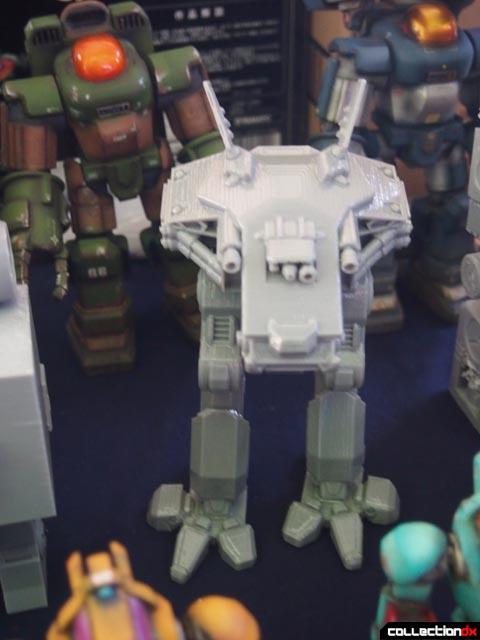 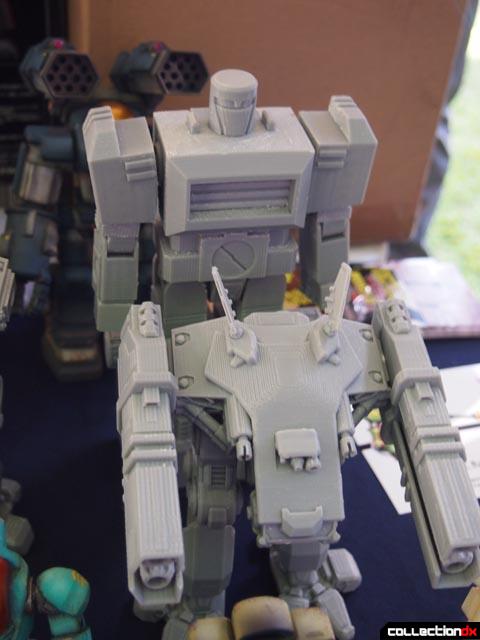 Shogun Plastics (https://www.facebook.com/pages/Shogun-Plastics-Shogun-Warrior-Replacement-Parts/ was there with a table of fantastic reproduction parts. 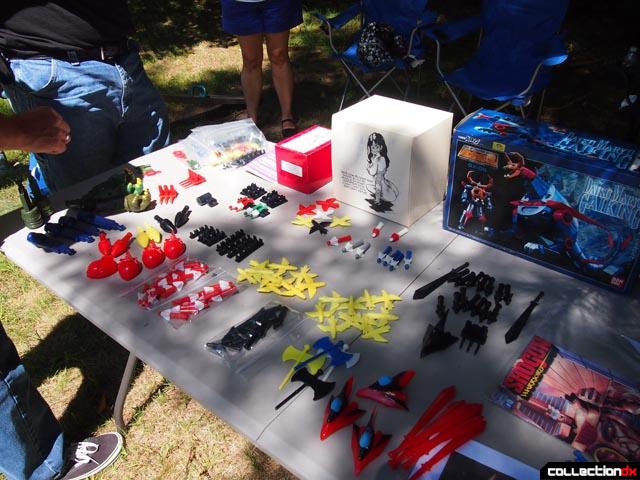 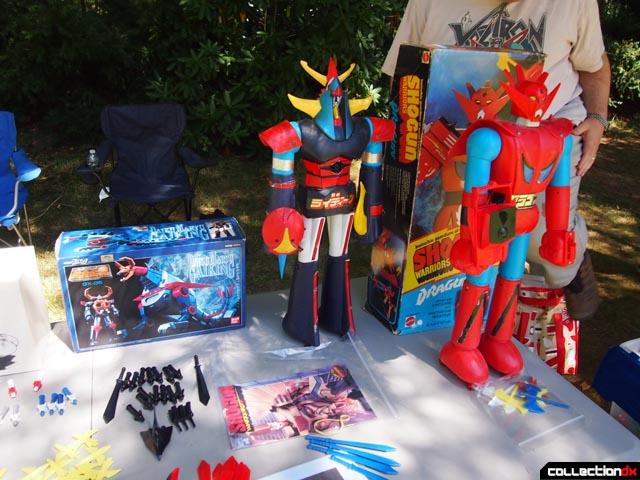 Join us next year for more Japanese Robot toy goodness! 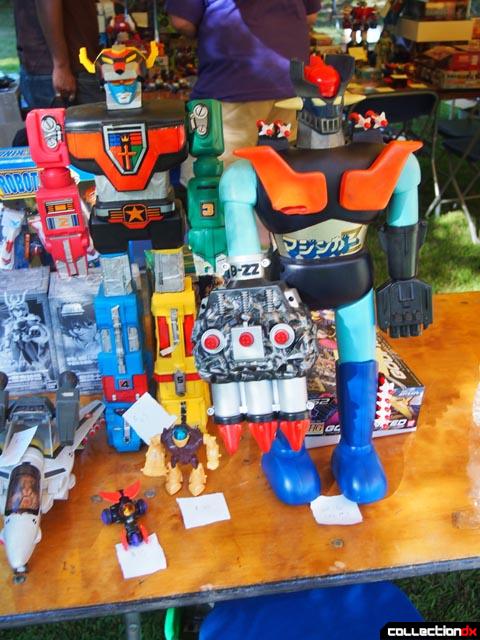 Summit was great as always, but I'm seeing most of the actual toys for the first time in the pictures. I barely got to look at most of it while trying to get to know as many of the newcomers as possible. Still missed a lot of them too! Thanks for hosting a great event, Josh.

Another fun Summer Summit! This was my 3rd summit.

Pardon any misspellings, the iPhone's keyboard coupled with autocorrect can be a real pain.

So many faces, some familiar, some new. Its hard to keep track and remember names (I'm terrible with names), especially when you only meet for 1 day a year and some folks can have similar looks. Certain folks from the last two years seemed a bit more open and sociable. I appreciated that. In conversations I'm not one to know names of Japanese individuals or specific Japanese terms used to describe certain types of Japanese toys, but I can follow along if I know what show/toy said Japanese person worked on or what said Japanese toy (die cast, perfect transformation, vinyl, etc.) is being discussed. Folks were much more forgiving this time in regards to those of us not knowledgeable of specific terms and names. Again, I appreciated that.

The area of choice and setup was much easier to navigate. Very open and not as mind-wracking as previous years. It's not the venue size that makes looking at everything a problem, its the lack of organization. The worst thing is checking out all the tables, boxes, and mats only to then later remember a spot or two you forgot to check or passed by because it was already overcrowded by curious onlookers at the time.

Also Josh, don't leave your packaged Transformers in the hot sun's rays. Humidity will build within their packaging bubbles, creating a hot environment which causes their clear plastic to curl, melt, and eventually collapse in like a bad soufflé. I saw this happen once to a Universe Sideswipe. Nasty stuff.

Ben, David, Sanjeev, Fred, and others whose names escape me were the stars of the Summit. Their made in-house/in-their-house creations have inspired us all and your rapidly growing showcase of pieces has piqued our curiosities. I am eager to check out three dimensional printing and attempt to bring that which is locked in my mind and trapped on paper into the physical world.

To whom I talked with about Microman, I forgot your name but it was a great chat. I think you had blonde hair.

One memory that really stuck with me that day was looking through the Kaiju crate and suddenly having this a little girl in front of me burst into tears. Turns out the other girl she was with ran off will all 3 vinyl Mothras or as they called them, "Butterflies." Though her father tried to comfort and reassure her with promises of buying this girl her own Mothra, I hate to see kids cry and not share. Remember kids, sharing is caring.

The event brought back flashes of early 90's childhood moments before my eyes when I would miss out on a toy or not have something cool shared with me. It made me remember seeing a man leaving k-mart toy aisles with arms full of Kenner Star Wars figures as my brother and I searched helplessly for a master Yoda. But most of all, it made me realize how now as older collectors, we are pretty much continuing that cycle. We were once the kids with no luck that could only go to the store when their parents needed to and only had a limited amount to spend IF our parents allowed it. Now that we've grown up, we finally have the free time, a car, and enough money to buy these things, leaving kids of today once again at a great disadvantage. In our attempt as kids to beat the older collectors, we have essentially become them. Being an adult with those advantages, and looking at how hard its been in the last few years to find what you want in stores, it's no wonder kids these days are less interested in buying a toy and more interested in a game on their phone that's just the mere swipe of a fingertip away.

Seeing the kids playing rough with Kaiju toys has also made me realize why we still need cheap toys for kids to beat on. Unfortunately, many American toys in these post-2008 days are being made cheaper, but cost twice as much now. It's not fair to kids and we should only be paying more for the products that do demand a bigger price and are meant to appeal to older crowds and collectors. Oh well, thems the times.

One 2013 Summit complaint I heard was that unlike years prior, many folks did not buy much. While this is true, for me it was less a case of being thrifty and more a case of just not finding as much cool stuff as prior years. I can understand the frustrations of not finding a cool item to bring home and for sellers, not moving the stuff they brought with them. MANY of the toys up for grabs I already owned. Though this first-hand knowledge allowed me the opportunity to tell folks about what they were selling and how it was in hand, what to be careful with, etc.

I only bought 1 thing, my first Revoltech, a purple EVA (the one piloted by that boy with issues) from the nice gentleman seen above chugging a coke in the 3rd pic (or 4th depending on how you want to count them). His name is Connor, like that dude from Highlander. Real nice guy. If you see him next summit, stop by, say hi to him.

Late in the day the folks from Onell Design showed up. Jesse from Callgrim, I apologize for the rushed and brief greeting. I was in the middle of sorting through a ton of Microman toy parts and needed to complete the task before the Mosquitos came out. I appreciate the work you, Matt, and everyone else who uses those Glyos joints produce. Keep doing what you're doing and tell Matt thank you for the glow items. It's was a totally unexpected, selfless act of kindness that he didn't have to do, even to the extent of which he did it, but it caught me completely off guard and I actually had to sit down from experiencing such a sheer magnitude of thoughtfulness. This made me grow to appreciate team Onell more than I could have imagined. It's such surprises like these that set your companies uniquely apart and above others who have grown too big to care about the very people that keep them in business. Thanks again to you all.

Like clockwork, once the sun dipped and darkness reached a certain point, out came the Mosquitos. They were brutal and swarmed me like fighter jets on Godzilla. I don't think I've ever been bit so much in such a short amount of time. Since then, the bites have healed and I am free of any mosquito-related diseases.

After darkness fell and the mosquitos had their fill, the remainder of us headed 10 minutes down the road to Pinball Wizard. It's right next door to this pizza place that dance's on the razor's edge of legality and somehow uses the Superman badge as its company logo. Copyright infringement aside, Josh B says they have a really great slice topped with mozzarella sticks, chicken fingers, and probably whatever else I can't remember that is found in a chain restaurant's appetizer sampler.

The arcade itself consisted primarily of pinball machines and enough retro cabinets to make you think they came from a closeout sale at FLYNN'S. Yes, there was even a classic TRON cabinet and a new Tron: Legacy pinball machine. All that was missing was Jeff Bridges and some Journey. Loads of Atari era stuff, the occasional neo geo multi-game/metal slug cabinet, and surprisingly even some nes/snes games in cabinets. Also present were 90's fighters, shooters, racing games, prize games, and many coin games to earn tickets from. There is a back room where they keep all the unused machines also with a few operational ones like Terminator 2 pinball.

As for the gang, Atom constantly tried his luck at a few pinball tables. Trying to apply what he learned from his pinball app to the real deal, with successful-opposite-results. On machines he had trouble with on the app he ruled in real life and with machines he had success with on the app, he struggled. If you folks reading this want an easy machine, I heard the Doctor Who pinball was great for beginners.

Dave, Mike, and I played air hockey on an unreliable table with dead spots and a messed up score counter. It was more like air hockey roulette, with neither man knowing who was winning or losing. I then played Virtual-On with one of you and then nascar with my brother. Josh played games with his son, excited to be staying up past his bedtime, but they left a bit early to be home at a reasonable hour. I closed it out with Dave and Mike at the Skeeball area, and Dave finally beat his personal best score. Not wanting to go home empty handed, I won two rubber bounce balls from what can only be described as the most effortless arcade game in existence. Even if you lose, you've still got your balls.

As the night rolled to a close and we had spent our tokens, the gang all gathered outside for one last farewell and shuffled off into the night with long drives ahead. As soon as it ended, another cycle was beginning and the summit of summers next lay on the horizon...