The Samurai Rangers use their Zord companions to fight off the evil Nighlok army that aims to drown the world with the waters of the Sanzu River. Although the Samurai Rangers start out with the 5 Folding Zords, one per member of the team, they find themselves in need of other Zords in order to face the strengthening Nighlok army.

The Tiger Zord was a design that I didn’t care for when I saw it in Shinkenger. In fact, it is actually my least favorite design in the show.  The drill feet and the big wheel at the center make this mecha look a lot less like a tiger. 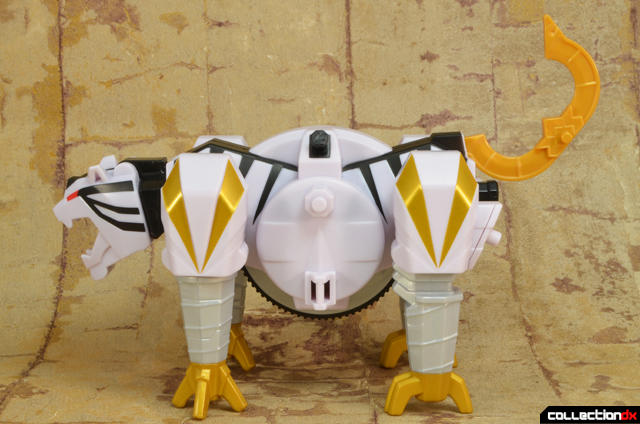 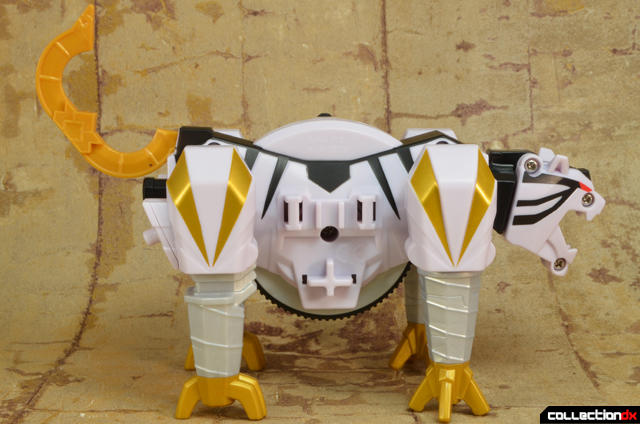 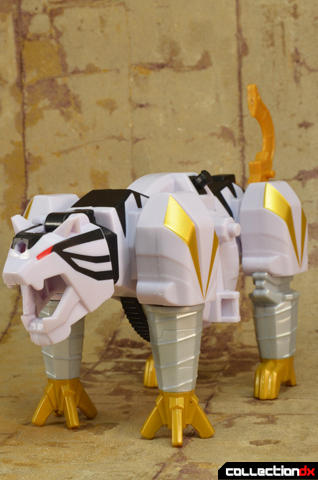 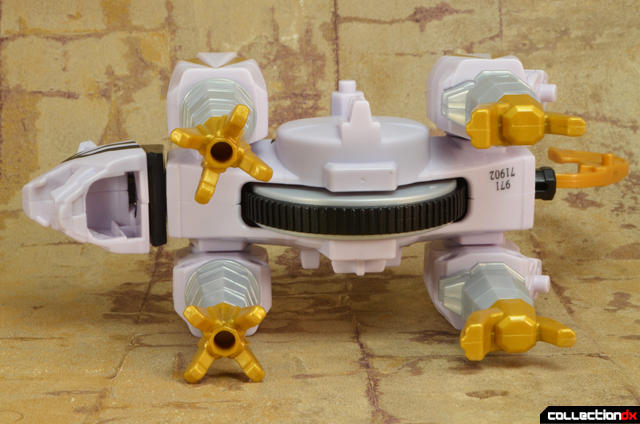 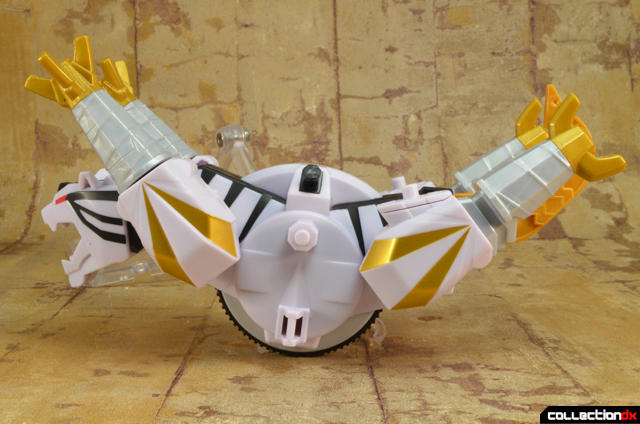 The Japanese version also had chrome drills, which are not present on the American version. That being said, this is not a bad rendition of the Tiger Zord/ Tora Origami when you factor in that this was produced for a lower price point.

Like the other releases of the Power Rangers Samurai auxiliary mecha, the Tiger Zord comes with its own 3 ¾ in Mega Ranger. 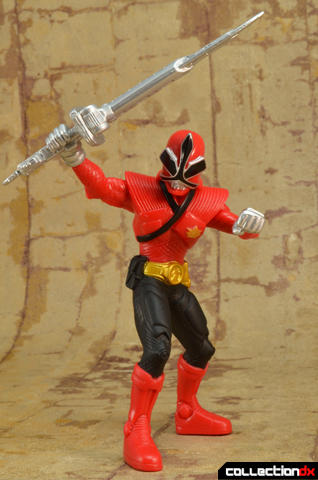 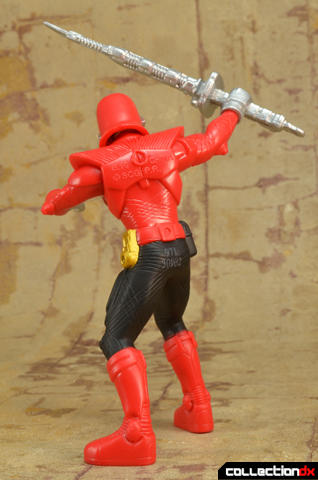 It is a decent little figure, with one point of articulation at the right arm, and a removable helmet. 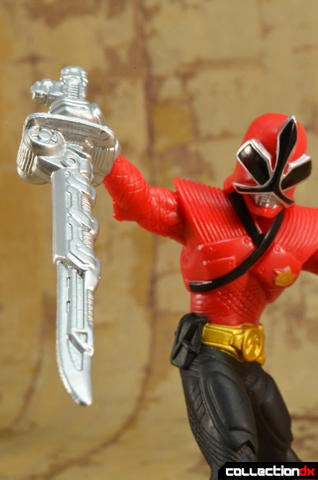 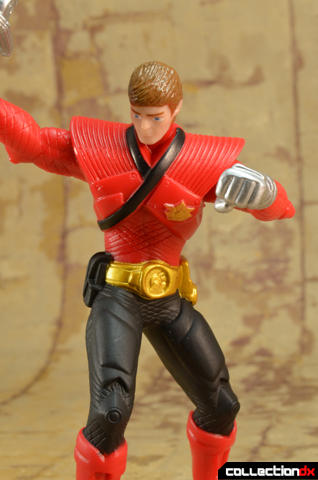 This little guy is meant to ride atop of the Tiger Zord. However, the position of the pegs on Tiger Zord will cause either the Ranger or Tiger Zord to end up at a weird angle. 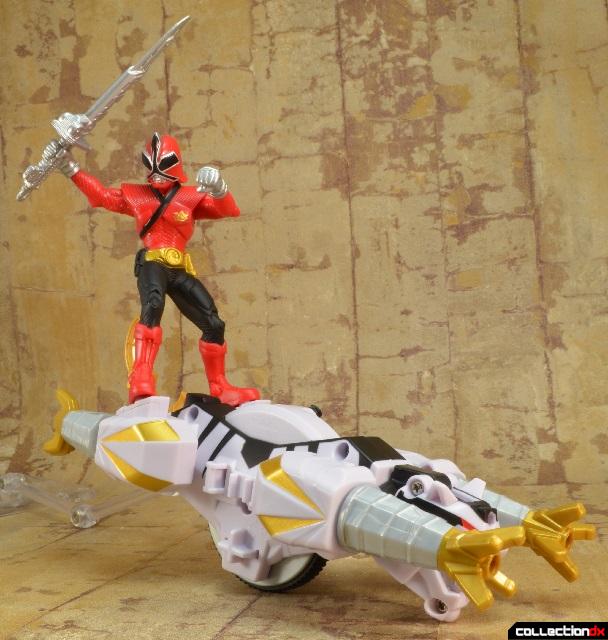 When the Tiger Zord combines with the Samurai Megazord, it becomes the Tiger Drill Megazord. 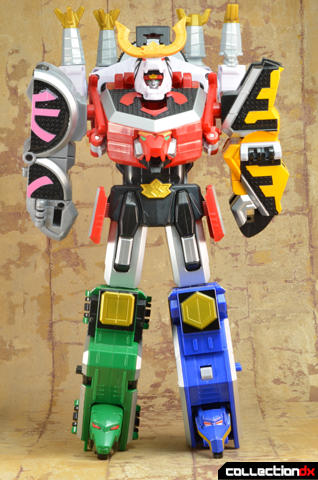 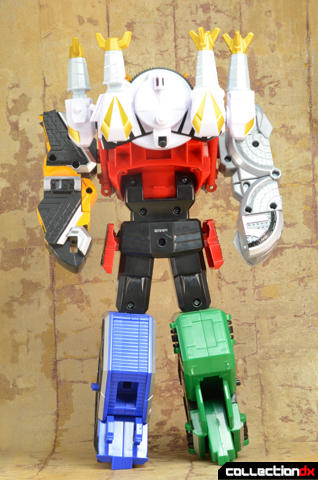 As we should all expect at this at this point, the Tiger Drill Megazord is not as beefy as its TV or Japanese counterparts. It is also less accurate than the Japanese version. The headpiece on the helmet, which is made of the Tiger Zord’s tail, lacks the ability to close and become a circular headpiece. Also, the drills should be facing slightly forward. The ones on this toy end up facing upwards. 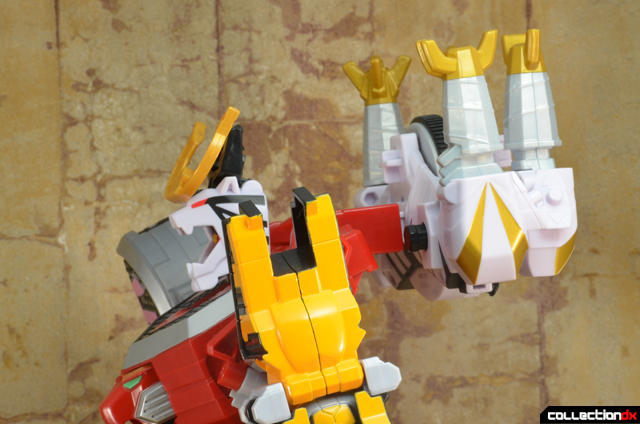 The Samurai Battle Wing is formed using the Tiger Zord, Swordfish Zord and the Beetle Zord. 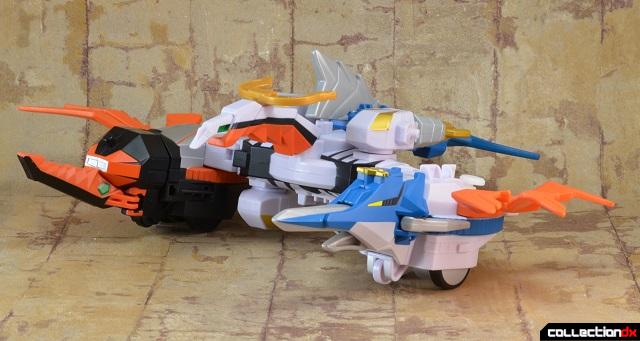 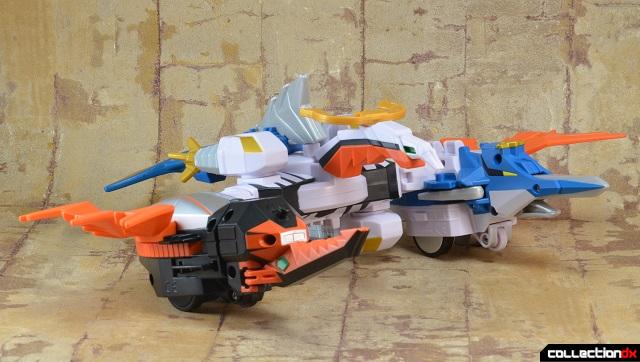 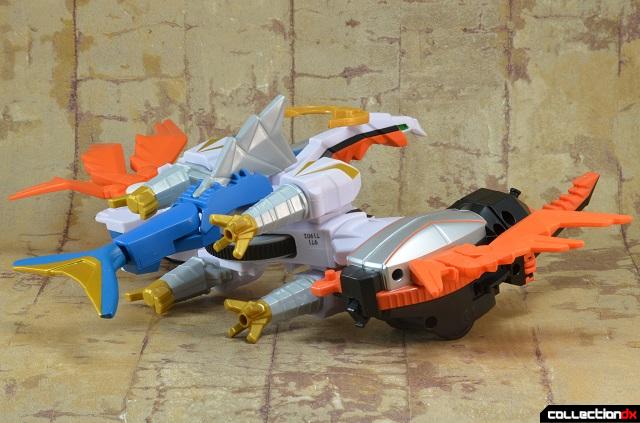 Once again, the headpiece on this is inaccurate due to the Tiger Zord’s Tail’s inability to form a circle. The Swordfish’s tail cannot split open like its Japanese counterpart. 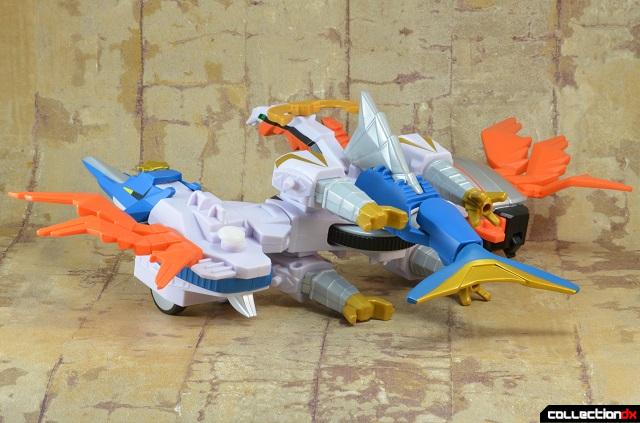 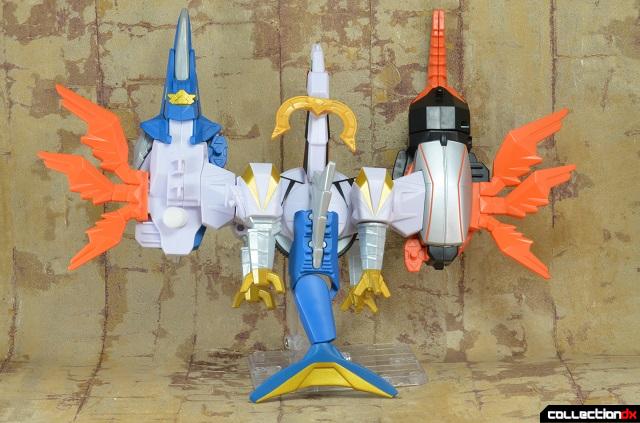 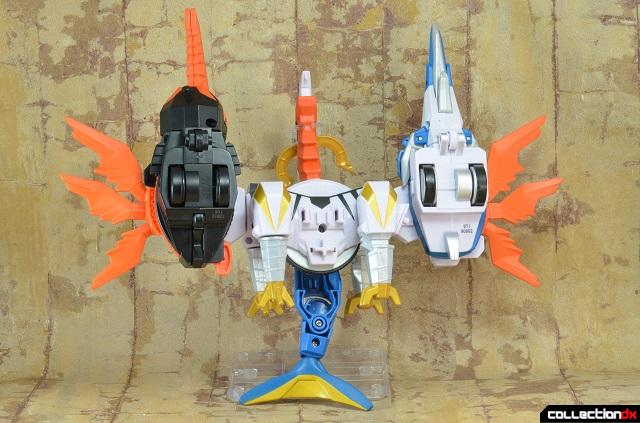 However, there is a workaround for this thanks to the fact the Swordfish’s tail can be rotated to lay sideways.   My only major beef with this combination is that the tail of the swordfish will sometimes fall off from its place on the Tiger Zord’s body. 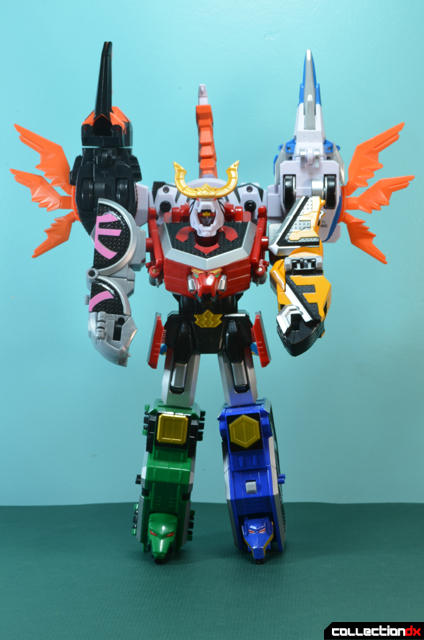 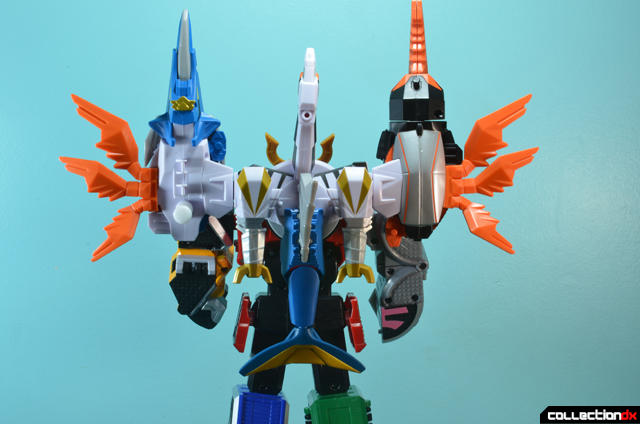 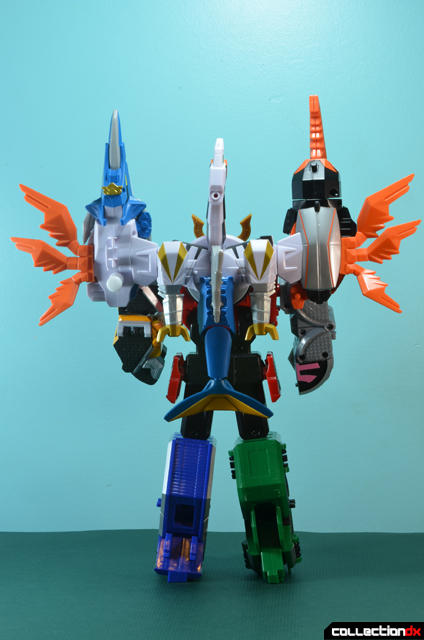 This combination is missing the drills that would be on the front of the Megazord. 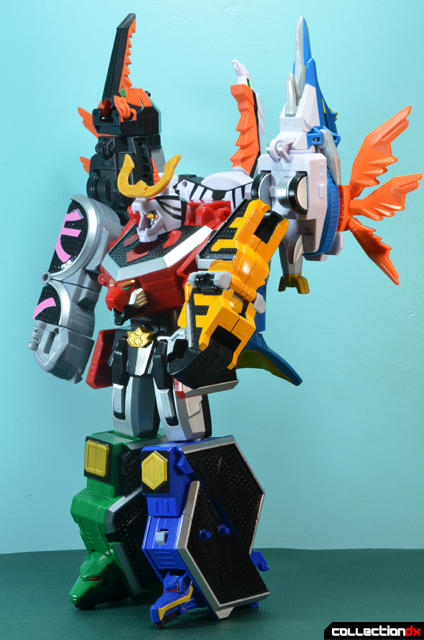 If you have all four of the auxiliary Zords-the Tiger Zord, the Swordfish Zord, the Octo Zord and the Beetle Zord- you can form the Samurai Battle Cannon. 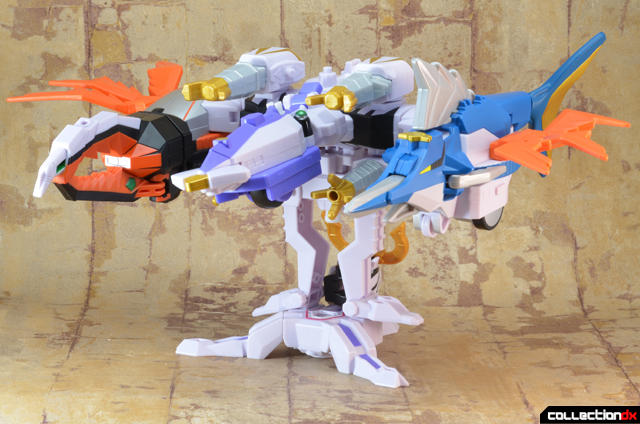 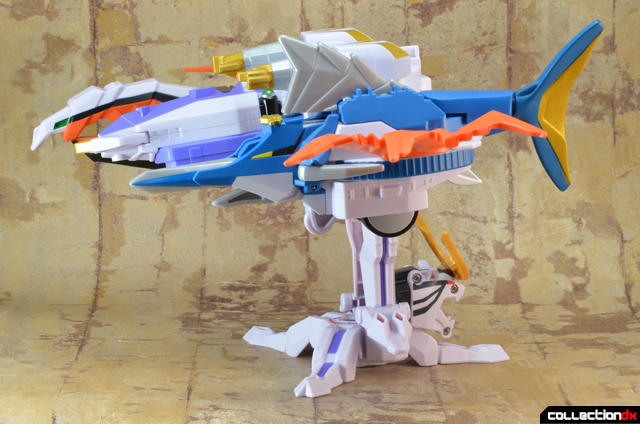 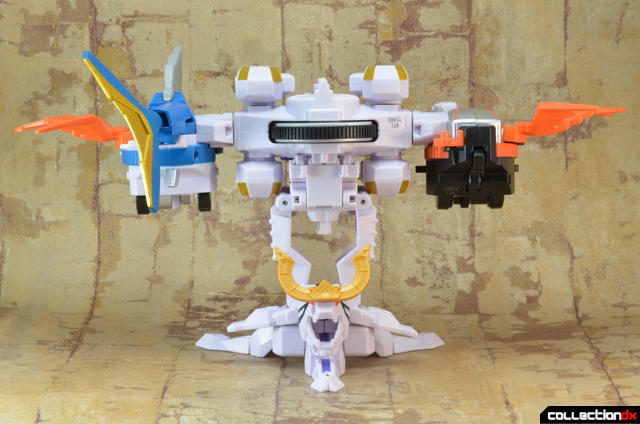 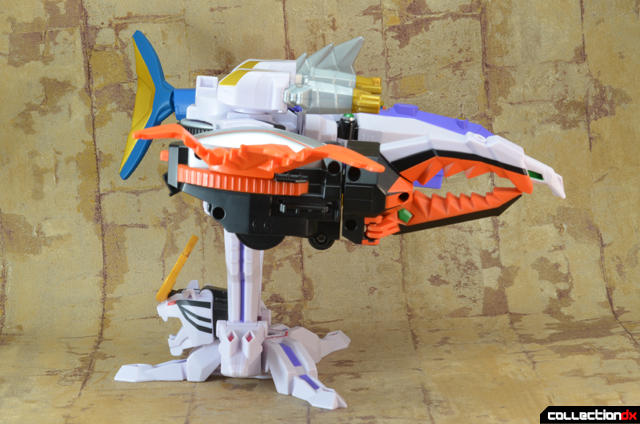 As it names states, it becomes cannon for the mighty Samurai Megazord.  It is a decent representation of the Samurai Battle Cannon. 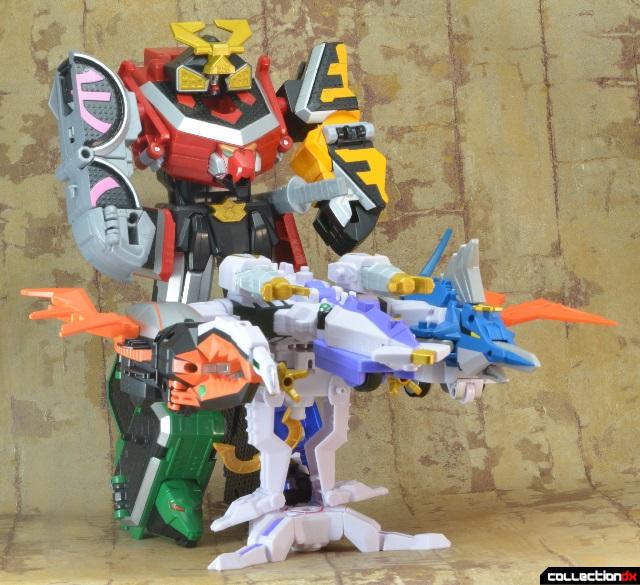 Like the other auxiliary Zords in this line, the Tiger Zord comes packed with a cardboard version of itself. This requires punching the pieces out of the cardboard sheet they come in and attaching the pieces to each other via some slots in the cardboard pieces. Since this little cardboard Zord does not come with instructions and since I lost interest with in after a few minutes, I ended up not putting it together. So there will be no picture of this throwaway addition to the toy. Sorry to all those who were reading this review only to check out the cardboard Tiger Zord.

In conclusion, this is an okay toy of a mecha that I never really cared for. While it didn’t sell me on the design of the Tiger Zord/ Tora Origami, it at least was able to do most of what it was supposed to. Once it combines with the other mecha to form the armament for the Samurai Megazord, I forgot my dislike to the Tiger Zord’s design and quickly found myself enjoying formation of the Battlewing and Samurai Battle Cannon.