Iron Man 2 smashed into theaters in May of 2010, accompanied by an absolute wealth of merchandise, books, and most importantly, toys!  Taking place 6 months after the end of the first film, Iron Man 2 sees Tony Stark upping the stakes and dealing with his new role in the world.  The film features many more and varied mechanical designs, including three suits of Iron Man armor throughout the film, and the fearsome War Machine.

In the last few years, Hong Kong toy maker Hot Toys has stormed onto the licensed movie character toy field with its Movie Masterpiece Series (MMS).  Each release in this line pushes the envelope of what is possible in plastic further and further, with life-like head sculpts and detailed outfits accurate down to the rivet and seam.  The Iron Man 2 movie line has not disappointed.

In Iron Man 2, War Machine is the Iron Man Mk II from the first film confiscated by Lt. Colonel James “Rhodey” Rhodes, Tony Stark’s best friend, when Tony is at his lowest point and deemed too irresponsible and dangerous to possess the Iron Man ‘weapon’.  The suit is evaluated by the United States Air Force at Edwards Airforce Base and modified by defense contractor Justin Hammer personally into the Variable Threat Response Battle Suit (VTRBS).  The suit is equipped with much heavier armor and a wide array of weapons.  It also kicks butt.  There’s some good fluff on Wikipedia about the markings on the suit actually referencing Air Force test units, so if you want more verbiage on the subject, go there. 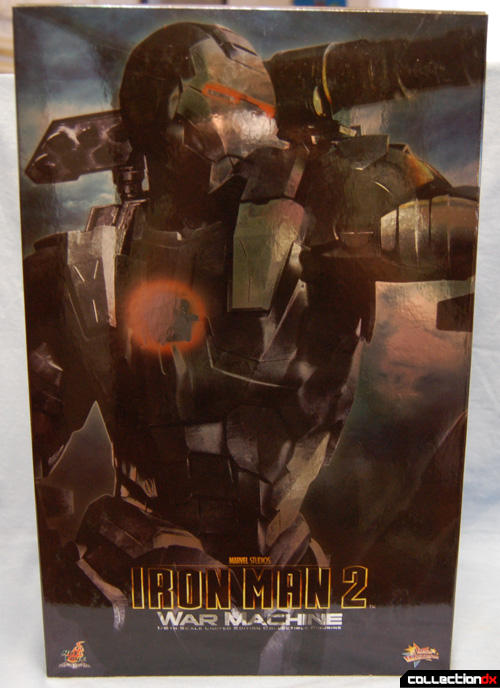 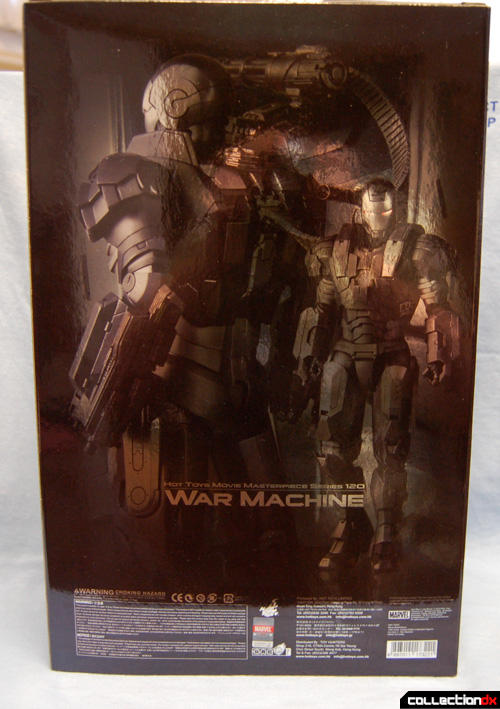 The box matches the previous Iron Man releases by Hot Toys, including the gorgeous but impossible to photograph holographic finish to the box.  Hot Toys’ boxes are sturdy and look really slick with that finish.  Otherwise, they are pretty standard modern box fare. 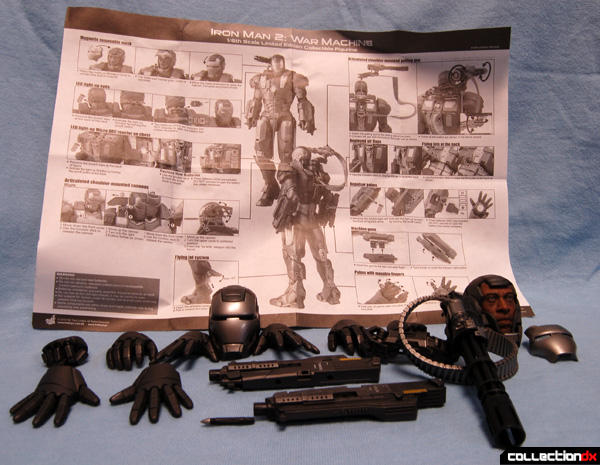 Everything inside the box that is not the actual figure is pictured above (besides the stand).  This includes three sets of non-posable fists, a set of fully articulated hands, the ‘ex-wife’ missile for the left shoulder launcher, a head with a clear interior for the light-up gimmick, a second head with removable mask, two modified assault-rifles for the arm mounts, the minigun with removable flexible ammunition belt and posable arm, and a nicely printed stand that I did not take out of the box. 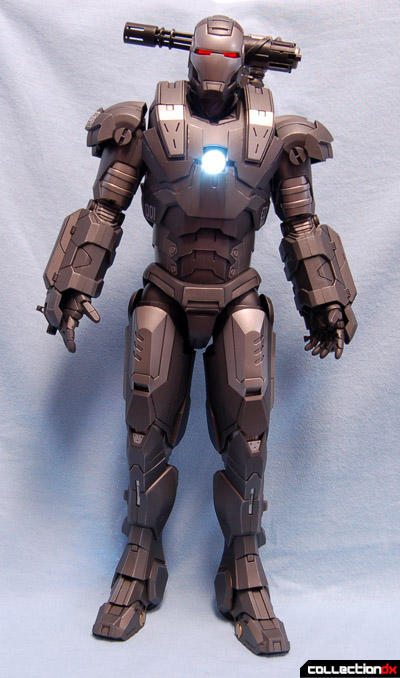 War Machine stands a little over 12” tall and has some bulk and heft to him.  The figure has a matte finish with some metallic details and drybrushing.  There are light up features in the head through the neck, the chest, and each repulsor in the palms.  No boot-jet lights in this one.  The lights are all pretty bright, but the eyes do not shine through the best.  The switches for all the lights are miniscule. 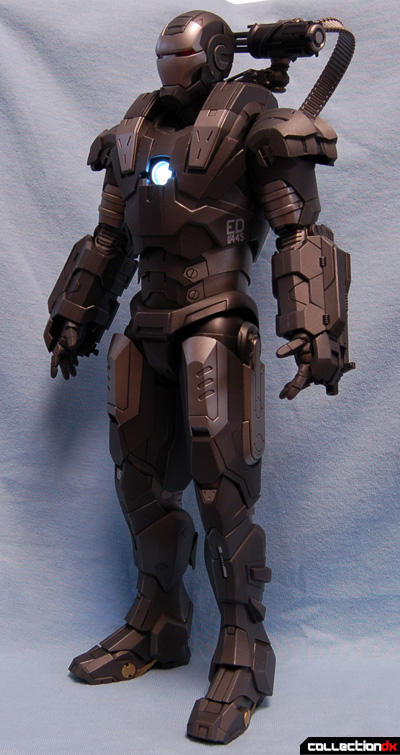 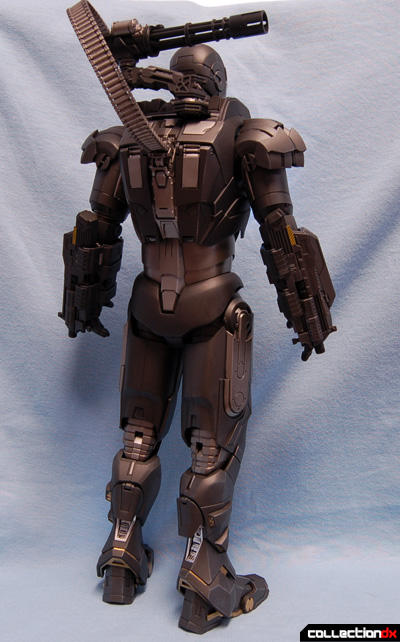 Moving around the figure, you will notice the tampo-printed markings that not every action figure version of movie War Machine has had.  One thing I did notice when re-watching scenes of the film, however, is that he is missing the right bicep Edwards Airforce Base patch, which is a bit of a shame. 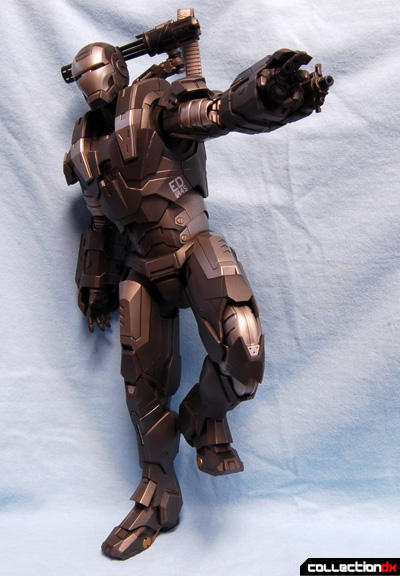 War Machine is plenty posable, but limited by the suit design.  Of note are the independently mounted shoulders, just like on the earlier Iron Mans, which allow for uninhibited shoulder movement.  The elbows only go to 90 degrees.  The hips and waist are impressively articulated using layered parts that move accurately to the movie while retaining the proper armored look.  The uppermost ‘tummy’ panel attached to the upper torso is actually spring-loaded so it moves with the waist.

Trying to describe this figure is honestly a little overwhelming, so I am really going to let the pictures do the talking… 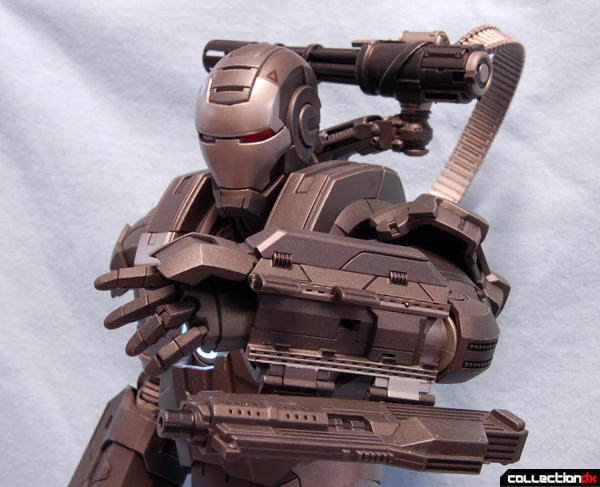 The arm weapons peg on to posable tie-down straps.  The straps don’t actually meet flush with the arm armor, but that is a super minor detail issue.  The guns fit in pretty well, but could be a little snugger.  The guns also hide the hand light switch. 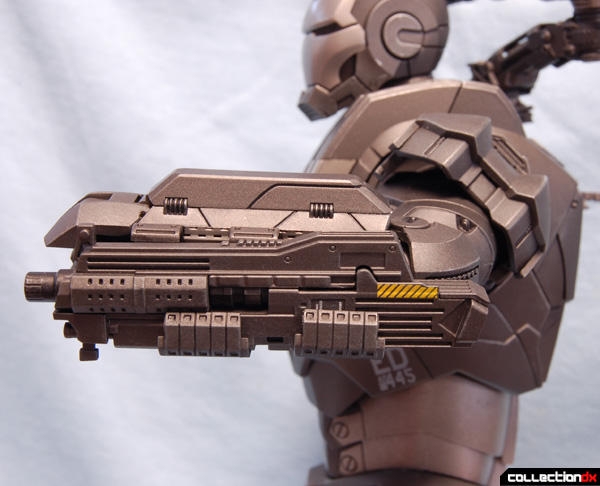 The guns are mean, menacing, and detailed. 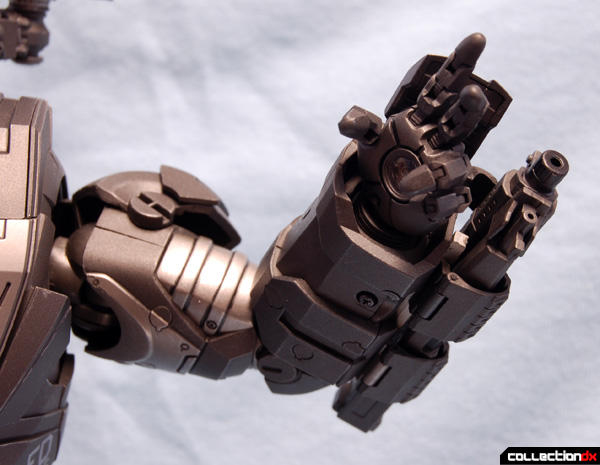 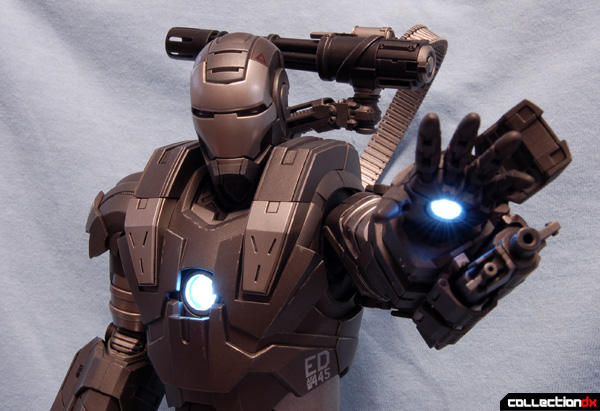 The posable hands are awesome, and the only hands you really need, since they can both make a fist and still light up through the clear palm repulsor.  They feel rock solid and are the perfect tightness. 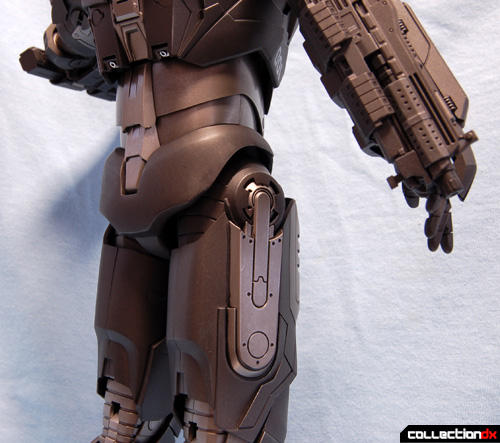 Here you can get a feel for the layered assembly of the hips, which is accurate to the design in the film and allows for unrestricted motion.  It also looks damn cool. 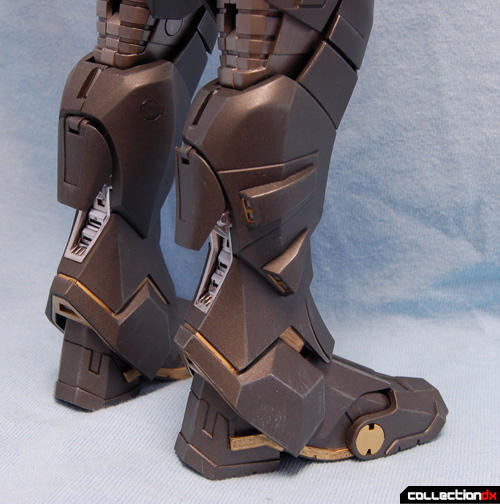 The feet are a bit extra scuffed up and full of detail. 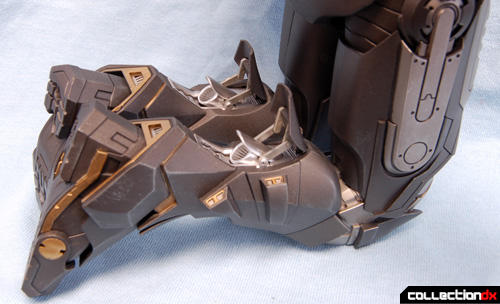 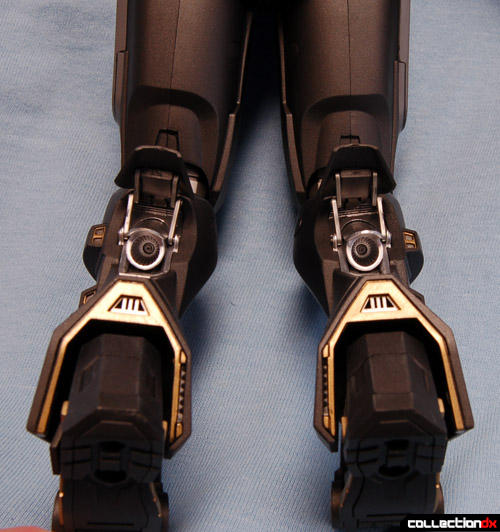 The flaps on the backs of the calves move and the extra rocket thrusters extend.  These parts are razor-sharply detailed and look like they could have come off of a museum-quality model rocket. 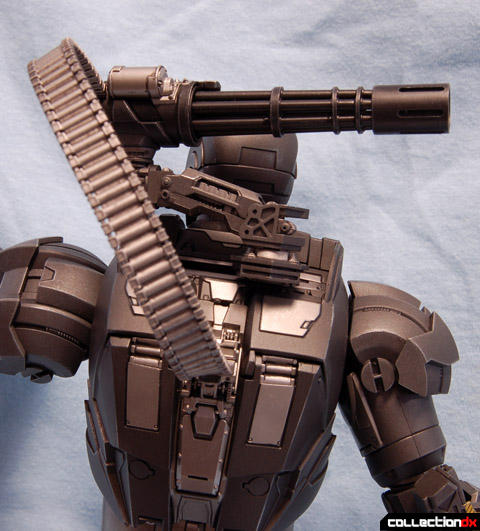 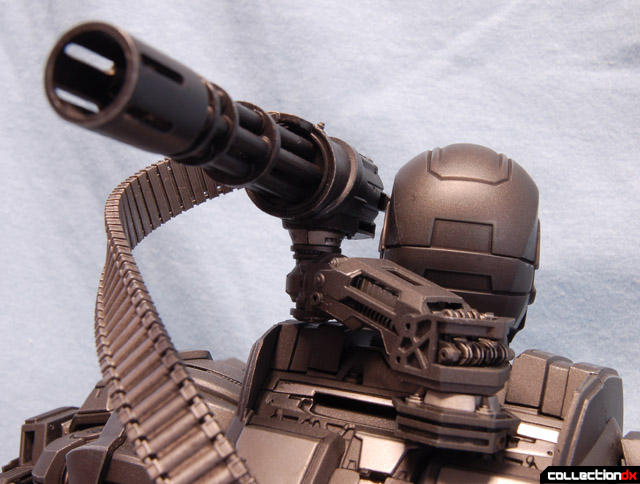 The minigun assembly is awesome and also features a ton of perfectly sharp and layered mechanical detail in the arm.  The barrels are also perfectly straight.  One thing I wish was different is that the arm only rotates at the pivot points, but cannot change elevation. 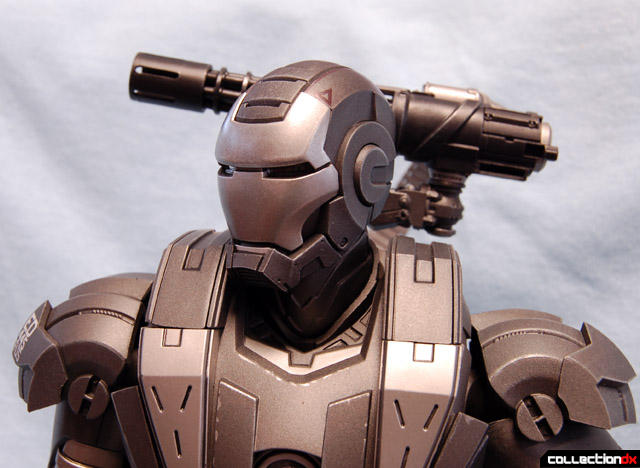 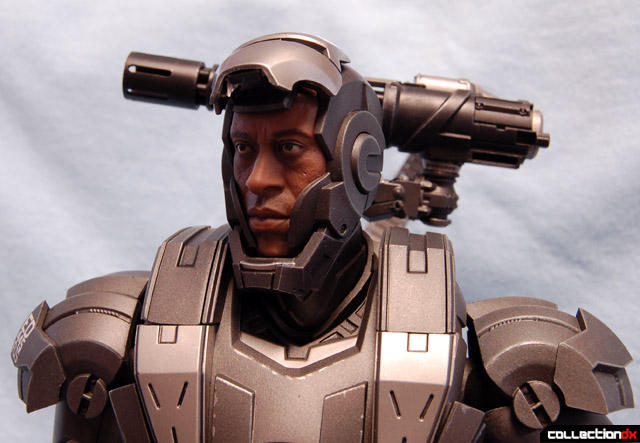 The removable mask head is perfect.  The lower jaw part moves down like in the film, and then the mask is actually magnetic, but does not feel loose at all.  It sits on Rhodey’s face perfectly, and then there is a ‘correct’ spot where it magnets to the top of the head straight and secure. 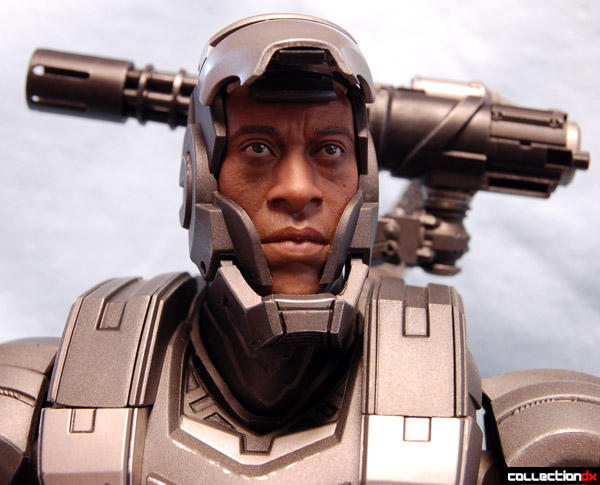 The headsculpt is another Hot Toys masterpiece.  The actual pose of the face is a little bland, but I read somewhere that many celebrities often only OK boring, dead expression likenesses for some reason.  The paint and detail on the face is amazing, and it looks the part of Don Cheadle. 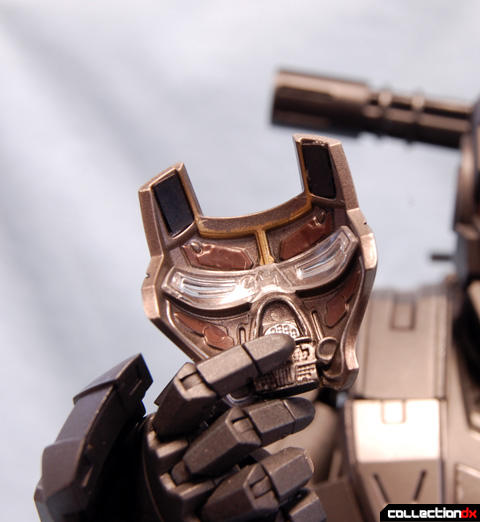 The inside of the mask is fully detailed.  Hot Toys does not mess around. 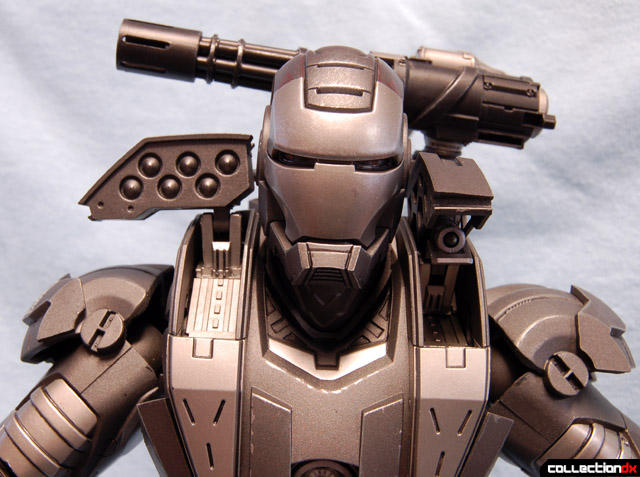 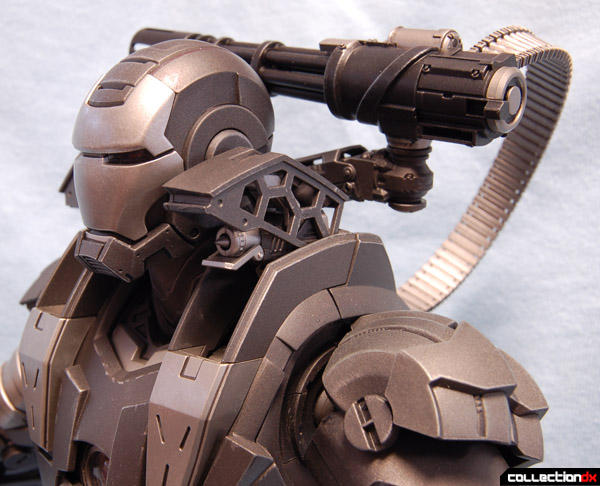 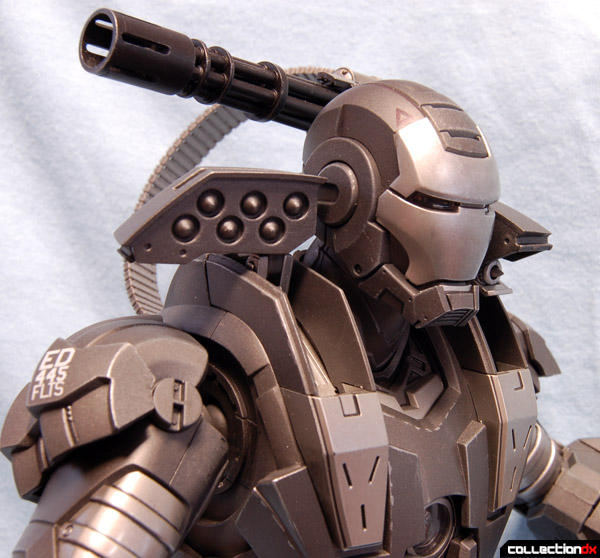 The shoulder weapon pods pull out smoothly and feel plenty durable even with all that detail.  The bright silver parts actually are spring-loaded and pull down so you can get your nail under the lip of the weapon pods. 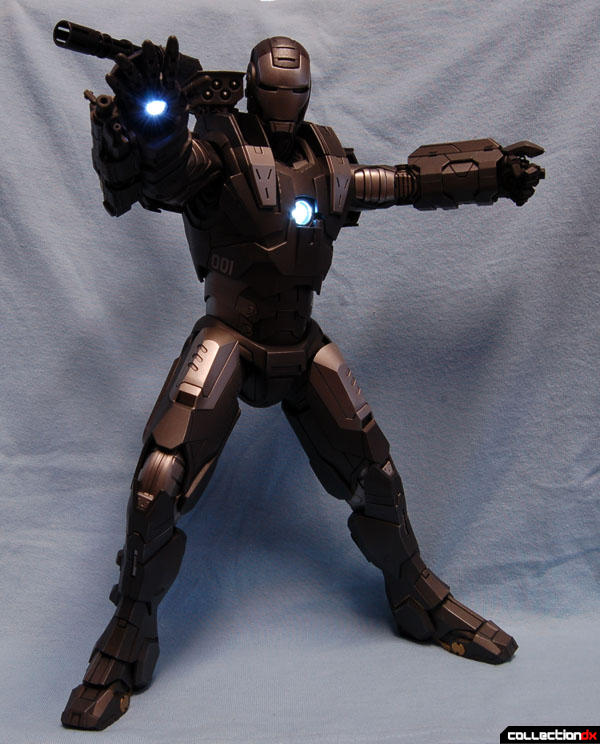 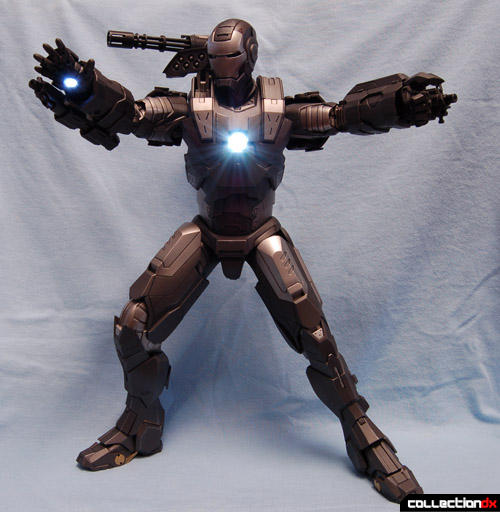 All this detail is great in isolation, but a 1/6 figure really makes or breaks on how it moves.  If you’ve seen Iron Man 2, you’ll remember that Rhodes moves very distinctively and purposefully in the weighty War machine suit.  The figure captures this well. 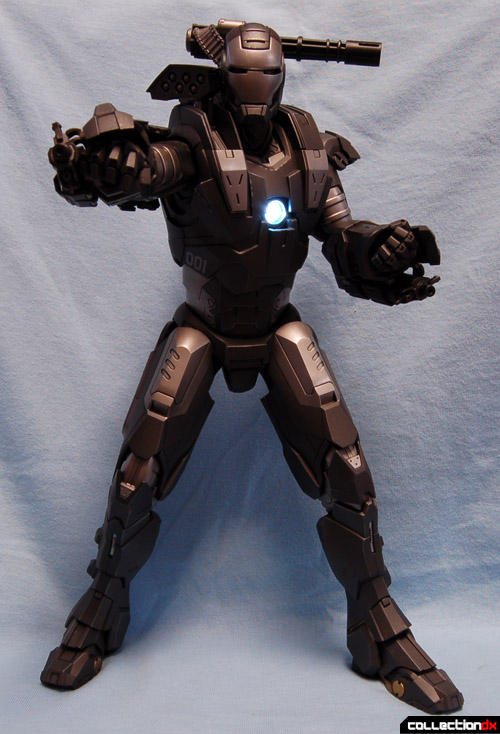 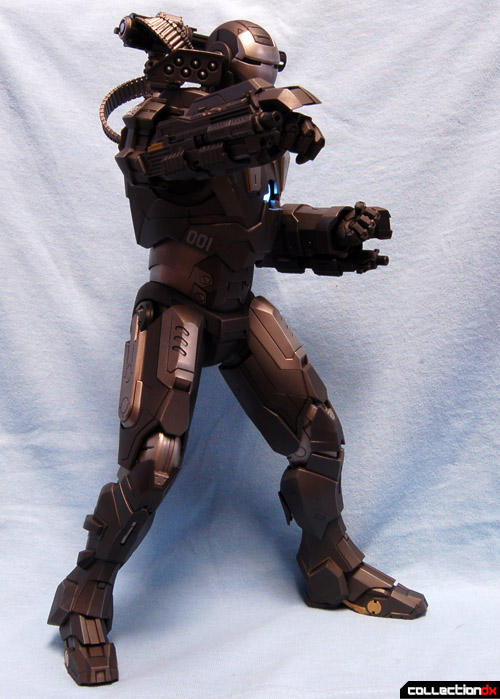 Ready for action!  War Machine’s ankles are rock-solid as well, something that has been hit or miss on some Hot Toys releases. 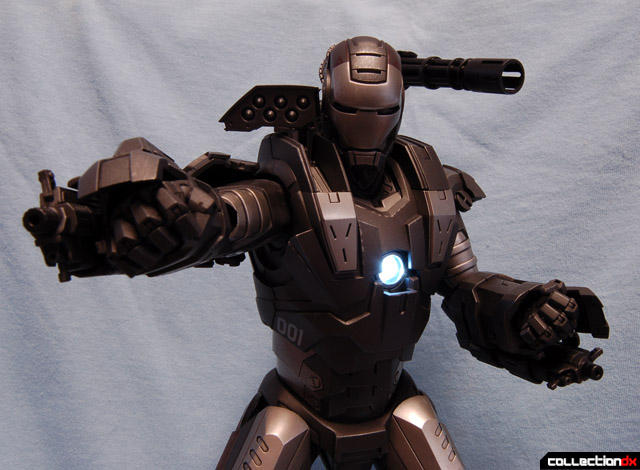 These Hot Toys reviews must be starting to get repetitive, but really, if Hot Toys makes a version of a character, you can be sure that it will be the best version of that character available and War Machine is no exception.  The Iron Man suit figures have been some of the coolest 1/6 toys on the market with their incredible articulation and detail.  TOTY material for sure.  Price-wise, I think this guy is worth every penny of his $179.99 price tag.  Now, I’m trying to figure out why I bought any other figures of this character.

9 comments posted
Worth the wait, as usual.

That's one heck of a nice figure you have there, Hot Toys figures really are the best!

This iron beauty looks like a full-scale replica from the Hollywood Wax Museum. It's just that strikingly real.

Truly an absolute beauty. As a bit of a War Machine fetishist, I hope I can add this to my collection one day without aftermarket prices being too crazy.

I like how there's an "ejector seat warning" label on the HEAD. Just in case, y'know, there's some problem with the body and you need to eject the head...

His repulsors should be RED! Argh!

Just checked the film (I have it on speed-dial on my desktop, it's one of my favorites) and they are actually the correct color ;) All of the lights besides the eyes on the suit change when he gets rebooted, so this figure reflects the VTRBS in the climax of the film when Rhodey is controlling it.

I'm not a classic iron man fan but these toys suits are amazing.
At first I really thought war machine but now am leaning towards the mark VII. It's newer and has the classic coloring.
I know it really a personal choice, but figured I'd ask for opinions or if there's something I'm missing