When I was ten, The Terminator and Terminator 2: Judgment Day were the greatest movies of all time. By turns exciting and chilling, the films are a simple story of evil robots and hard-bitten heroes. Oh, and naked time travel. While they certainly aren't high-minded literature, they remain in the top tier of action movies. While Terminator 2 is a big budget blockbuster, the original is a quick and dirty, mean and nasty little piece of work, and I love it. 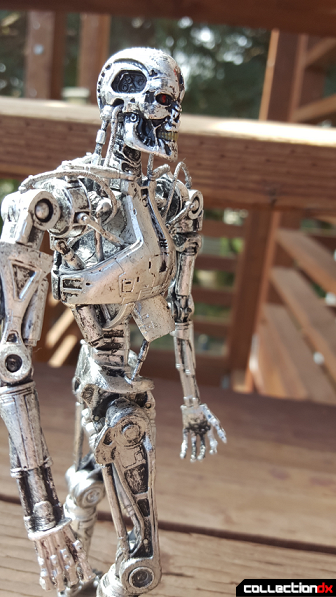 You know what was burned into my ten-year old brain more than anything? Demonic robot skeletons, stomping on human skulls, murdering the last dregs of humanity, their all-too human teeth gnashing in their smooth chrome heads. The Endoskeleton is a masterpiece of design, born from a nightmare James Cameron had and brought to life by Stan Winston and his crew. Many sci-fi fans claim only the Japanese can do memorable robot designs, but the Endoskeleton proves them dead wrong. 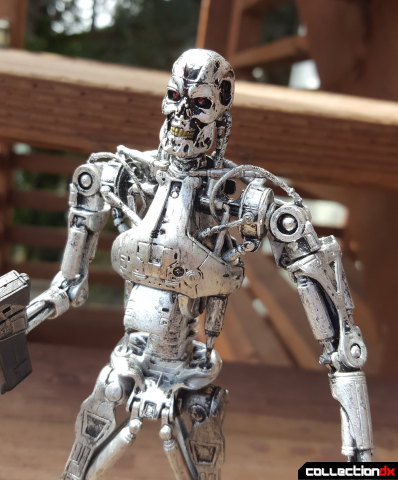 NECA has done a stellar job capturing the look of the inner Terminator, from the top of its laser-scorched head down to its clanking robot toes. The paint work is fabulous and the grime and burns really give this robot a "lived-in" feel; you can tell this Terminator has seen many skirmishes since Judgment Day. 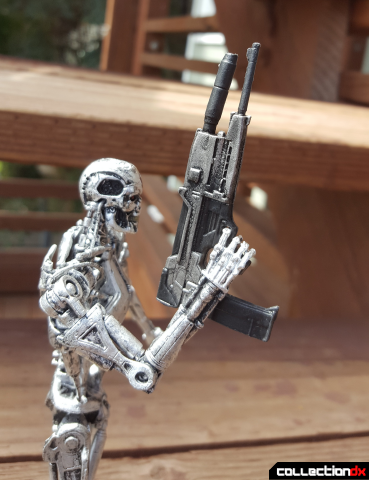 Unfortunately, this robot is actually a modified reissue of an old NECA toy. Yes, it has a new head that more closely matches the source material and yes, the paint scheme is far superior to the original, but it inherits a lot of the flaws of earlier NECA toys. This is from the days when NECA was more like old McFarlane toys. This means excellent sculpting but awkward, limited articulation, misshapen accessories, and brittle easily broken figures. 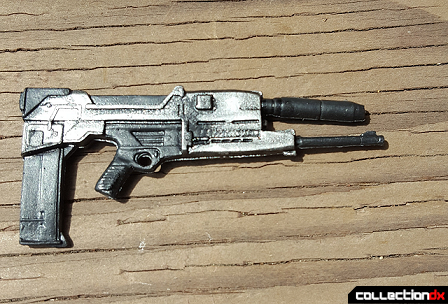 Yeah, what's wrong with this gun? The barrels are bent and ugly and the magazine is twisted. No amount of hot water would fix this either. 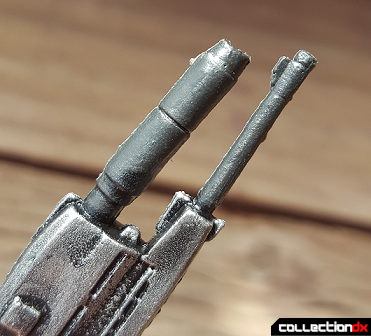 This is really unimpressive. You may as well throw this gun away altogether or just leave it in the box. 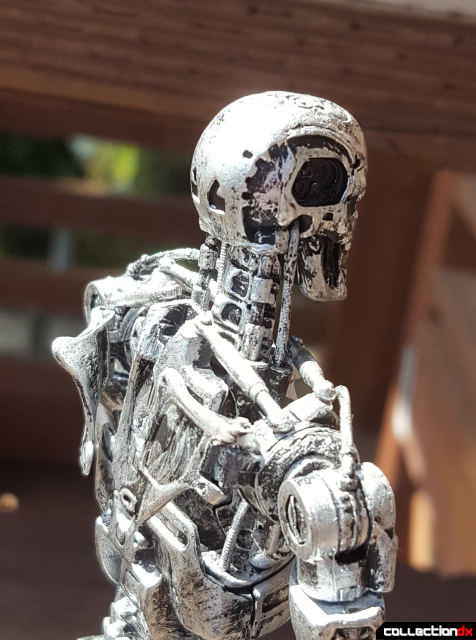 You know what else is misshapen? One of this robot's shoulder blades. It looks less like a shoulder blade and more like a silver potato chip. I guess you can pretend it was badly melted in a human resistance rocket attack? 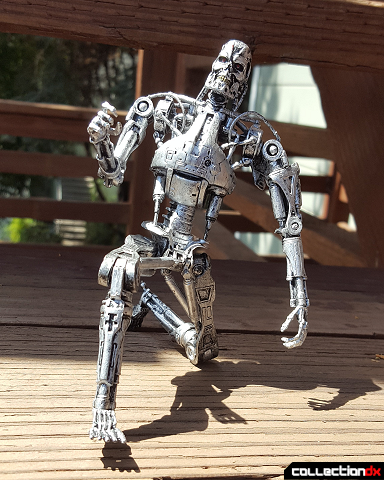 As I mentioned, the articulation is really underwhelming. This is partly due to the sculpt and joint system, and partly due to the copious amount of working pistons. The toy can hardly crouch! Now, don't me wrong, the detail of working pistons is a great idea and it looks wonderful, but in practice it means the robot does not move very much outside of the arms. Furthermore, the right knee is mangled and can barely move. 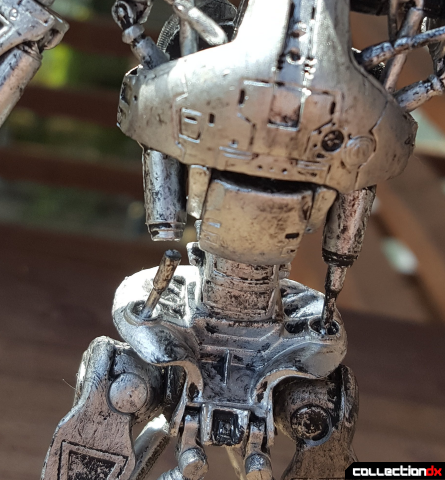 What's worse, two of the pistons were broken out of the box. When I turned the robot's waist, the piston extended and a broken chunk of plastic fell out. 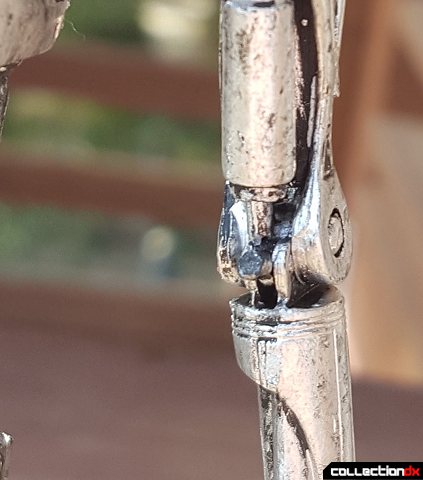 I also noticed the small piston on the left elbow was broken without even doing anything. I didn't even try to bend the arm yet! 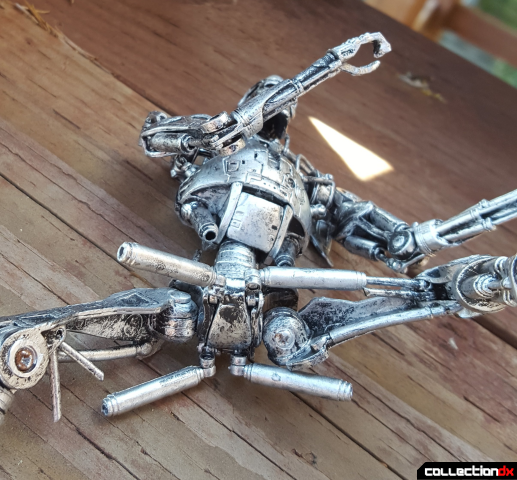 Other pistons are going to pop out if you if you try to move the limbs too much, especially the legs. This means not only is the toy limited in how much it can move because of the sculpt, it's limited by the design of the pistons. There's nothing holding them together and it's very easy for the plastic bits to break off when they pop off or when you try to reassemble them. 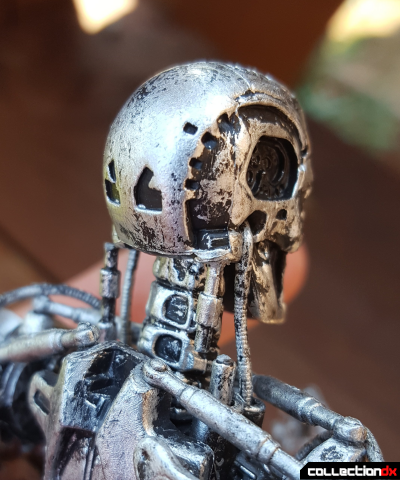 Then there's the worst thing: the neck. Do not attempt to turn the head ever. Do not make your Endoskeleton look left or right. If you do, I guarantee the pistons on the neck will break. I was being gentle and slow and they broke anyway. I don't even understand why the toy has a neck joint if moving it is going to break the pistons on either side of the head.

I can't help but remember my Kenner Endoskeleton from the '90s. It was squat, low on detail, and most of the pistons were just sculpted into the limbs instead of working mechanically. But the pistons on the Kenner Endoskeleton's waist were stretchy rubber and basically impervious to damage. I sort of wish NECA had implemented a bendable piston solution, too. It wouldn't have to be stretchy rubber, but maybe some flexible wire like a twist tie or something like those old bendy toys from back in the day would work. 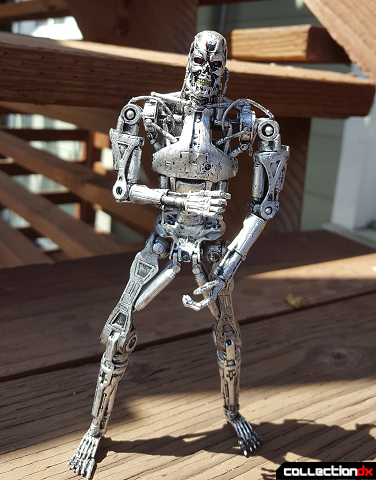 It's a shame the toy is so fragile, because it looks lovely. I know the original NECA Endoskeleton and weird video game and Kenner-inspired color variants go for more, so this is still the most cost-effective way to experience NECA's inner robot, bI don't know if the more expensive NECA Endoskeletons are any sturdier. I kind of doubt it.

I want to love this because I love the Terminator movies. I love the design of the Endoskeleton, bthe fragile, broken-out-of-the-box nature of the toy makes it difficult for me to recommend. Maybe this is a random quality control issue and others will have better luck, but don't be surprised if your NECA Endoskeleton is best as a immobile display piece or a broken robot crushed underneath Sarah Conner's boot.

6 comments posted
I just realized, I want to

I just realized, I want to see an S.H. Figuarts Terminator Exoskeleton

My endoskeleton has fared far better than yours - unfortunately, his toes are so loose than he just WON'T. STAY. UP.

The smaller, hard plastic barrel eventually broke off after enough shelf dives, I glued the damn thing back on and used a Tamashii stand to hold him by the spine.

"The Terminator Endoskeleton provided for review by Gearbest.com. Click on the link to get your Endoskeleton!"

Well there's your problem. Gearbest sells Knockoff/Counterfeit items. NEVER trust products from there. It's all fake garbage. Sorry bud, but you reviewed a knockoff.

I own a LEGIT Neca Terminator Endoskeleton and it is FAR SUPERIOR to the trash shown in this review. I'll gladly do a review of the real toy for the site to set things straight here. It's a wonderful piece and doesn't deserve to be dragged through the mud by your accidental misrepresentation.

I got nothing against CDX reviewing Knockoff/Counterfeit toys for the site AS LONG AS they are pointed out as such. There are loads of great vintage super robot knockoffs on the site that definitely deserve their moment in the sun. They have helped turn CDX into a tremendous resource for vintage and obscure knockoffs that otherwise may be forgotten to ignorance and time. That said, they are always noted as such and so should your knockoff toy review.

Just one look at this toy and I can already tell that this NECA Endoskeleton is a knockoff - the sloppy paint apps, the poorly-made gun and not to mention the fact that the toy breaks easily. Granted, NECA's QC is a hit-or-miss but it's sad that there are many NECA bootlegs out there.

I agree this is probably a knockoff, but at the time, without a comparison, we did not know. But to be fair " the sloppy paint apps, the poorly-made gun and not to mention the fact that the toy breaks easily." - this was pretty much NECA at the time.

I have the original Endoskeleton from NECA and the paint apps looked better than the figure that was reviewed. Breakages from NECA are unfortunately common up to now and it's this reason why I stopped buying their toys after 2017.