Sometimes I wonder if assigning toys to a certain genre is even worth the bother. With each successive exception to the "rules", you can get pulled further and further away from the original intent of labeling it in the first place. This is a common problem with machinders. It's pretty common for any large sized toy to be called a "Jumbo Machinder" regardless of whether or not it has any similarity to an actual Jumbo Machinder. Once you start dealing with smaller toys, it because even more difficult.

With that in mind, I give you "Super Hero", a 12" bootleg toy that Josh was kind enough to pick up for me when he was in New York City covering this year's Toy Fair. 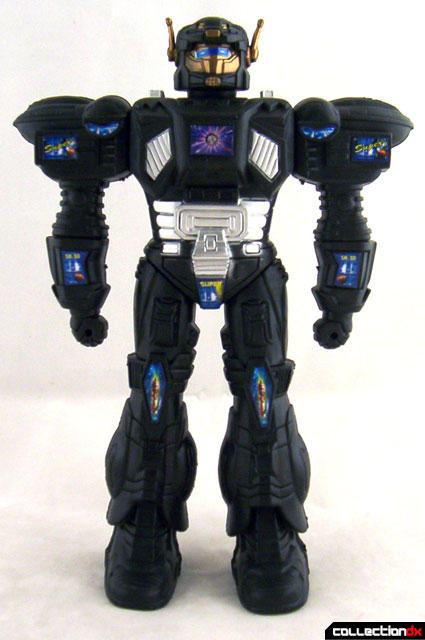 What do you think? Is this a junior machinder? It's kind of got a machinder-like stance, but it seems to be made more of regular hard plastic than polyethylene. I do display this with my junior machinders of course, but.... I don't know. You can just tell it's different, y'know? I'm including it in the machinder category because.. well, I've dug myself a hole by including some of the Easter basket Gundams there. I guess if those are in, this one is, too.....

Anyway, regardless of what you want to call it, it's a pretty cheaply made toy. The plastic it brittle and thin. After photographing it, I left it on the top of my desk, where it would eventually fall to the floor (probably at the same time my Super Warrior die-cast did). The connecting peg inside the left leg broke in half (and the arm broke off the Super Warrior) and when I tried to glue it back together, the back of the leg cracked just from applying some light pressure while the glue set. It never held anyway, so I just put the leg back in with only half the connector. It stays on, but is very loose. 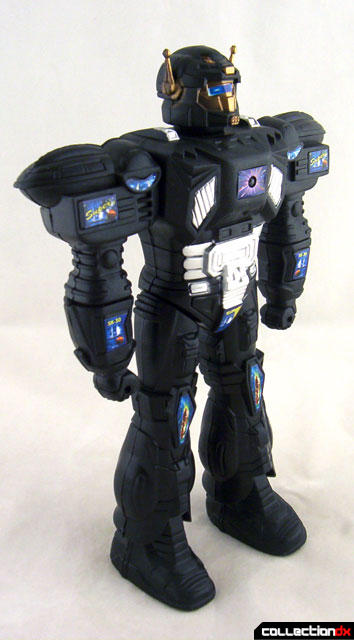 There are no manufacturer markings on either the toy or it's packaging. (The vendor who carried this repaired the broken top part with cardboard from another product. This wasn't made by 3M!) Super Hero came on a blister card. 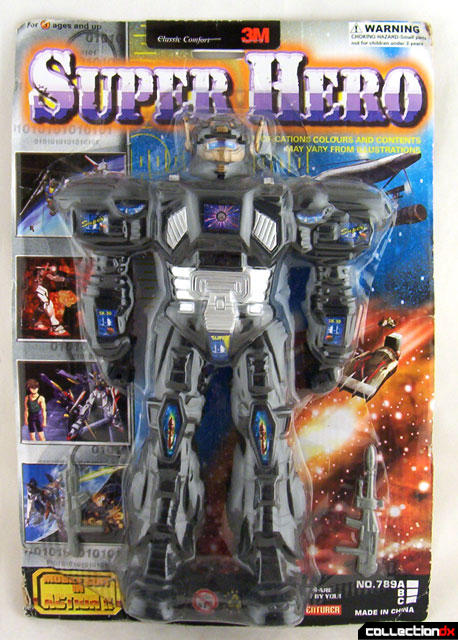 The toy is articulated at the hips, shoulders and neck and includes the always popular light up feature in the chest. Unfortunately, this didn't work right out of the package and I don't dare try to take it apart to replace the battery.

Super Hero is cast in all black plastic with silver and gold painted highlights. Stickers are also sprinkled about the toy. I have no idea what they are supposed to represent. It comes with two guns that are very thin and lacking in detail. They look like they should go with some G.I. Joe knock-offs instead of a "mighty" robot. They fit into holes in the fists. 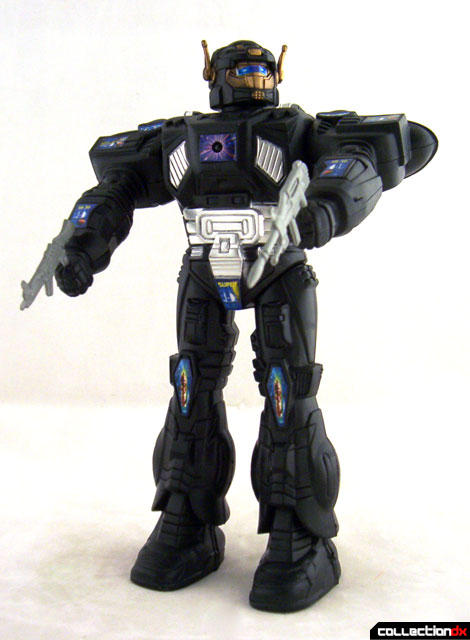 Ok, so now I guess it's time for the fun part of the review. It's name that rip-off time! I think it's pretty obvious that the legs of this one are based on the legs of a Zaku, but can you see any other parts stolen from more famous robots?

Er.. the head is a rip off of Master Chief from Halo ? except for the antennas :)

DAT SHOULDERPAD
Seemingly ripped from Dancouga along with the rest of the arm. I wouldn't put it past them to have part of that damned Robo Cress there, too. The head kinda looks like a cross between Kamen Rider and Master Chief, I have to agree.

One of the weapons looks like the original Gundam's beam rifle. And the overall shape of the legs appears to be some skinny bastardization of Zaku legs.

If I had been given this toy as a small child, I would have cried. A lot.