While I never had the kind of emotional connection to Sludge or any of the other Dinobots like I did to Grimlock as a kid, Sludge is still a robot dinosaur, and that is awesome. I think Megatron summed up the original three Dinobots' personalities best in the '80s cartoon War of the Dinobots when he said, "The Dinobots do have weaknesses! Grimlock is arrogant, Slag is hostile, and Sludge... stupid!" My only real connection to this toy as a kid was one time I was in Sunday school and poked around in the desk I was sitting at and found a Sludge inside the desk! Now I was a very moral, forthright child (no doubt in part thanks to my parochial school experience), but I was sorely tempted to swipe that Dinobot. That Sunday school meeting was an excrucating test of character as a 6 or 7 year old me resisted the temptation. I did not steal Sludge, but I really, really wanted to. Sludge began life as the Diaclone Dinosaur Robo Brontosaurus, which was a human piloted robot dinosaur designed for fighting actual dinosaurs brought there by the evil alien Waruder army. Let's face it: robot dinosaurs fighting ACTUAL dinosaurs are the stuff children dream of. I know I did. It's also one of the reasons the Dinobot Island two parter is one of my favorite parts of the original Transformers series. 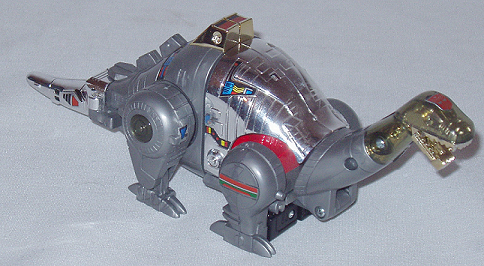 So if Sludge's personality is just "he's a moron", why should you care about the toy? Well, there's definitely the robot dinosaur factor, but it also has some of the design elements I love about Grimlock, especially the transparent plastic with gold chrome plastic parts inside of it. I love that Sludge's dinosaur mode head is basically just a featureless clear skull and neck with chrome inside. No eyes, just smooth. Love that. Another thing I love is that the brontosaurus is a completely outdated concept. While Grimlock at the other Dinobots just represent old fashioned thinking about dinosaur posture and such, the brontosaurus never actually existed. Some paleontologist found an apatosaurus that he thought was too big to be an apatosaurus based on the previous unearthed skeletons and this was missing its head and its tail. The guessed what belonged there and ended up with a new, non-existant species of dinosaur that ended up being a pretty big part of the pop culture intepretation of dinosaurs. In the '70s this dinosaur was totally discredited, but it seems like Japan didn't get that memo until much later. 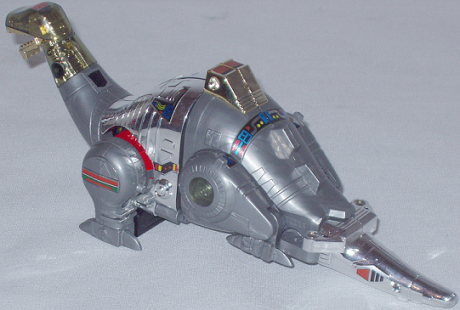 This is a silly feature, but something I really like about Sludge. The rear legs can collapse into the robot's side for ridiculous dino-dragging action. Or it's actually part of the transformation to robot mode... It's also clever that the screws on the back legs are hidden by those circular clear panels, but it makes it very hard to disassemble it without messing up those panels if you're trying to repair a Sludge using a junker. One thing I do not like about Sludge's dinosaur mode is that the front legs have half of the arm just bend under the dinosaur's body. It's a lazy solution to the transforming problem and looks kind of bad. It also reminds me of those old wind-up robots who had little flat bits sticking out from their feet in between the robots' legs so they could keep their balance. It's not very flattering. This also means that the dinosaur's front legs are basically immobile. Both of Grimlock's dinosaur mode legs are functional, so this is a definite step down. The cockpit for the Diaclone pilot is also underneath the dinosaur so you can only see it in robot mode, which I don't like either. 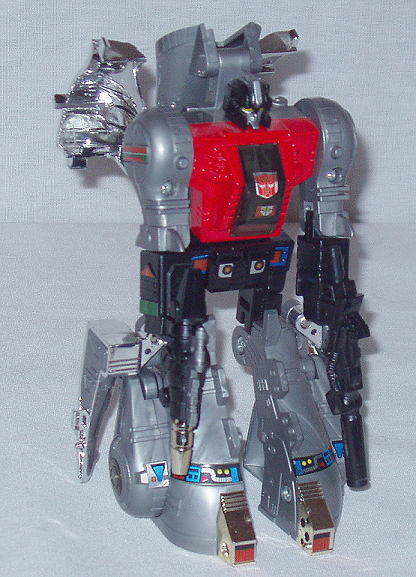 Robot mode is an improvement and I think probably looks a little bit better than Grimlock's because the head is actually in the right place. There still a lot of stuff hanging off the robot mode's back, but the chest is a nice solid chunk of diecast metal and the prominent cockpit looks good like this. 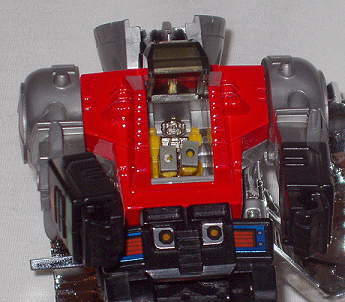 And of course you can stuff a Diaclone driver with magnet feet into the cockpit even though the driver does not come with the Transformers release. This is a real shame because the pilot in the robot's cockpit really makes this toy more fun and makes it look cooler. 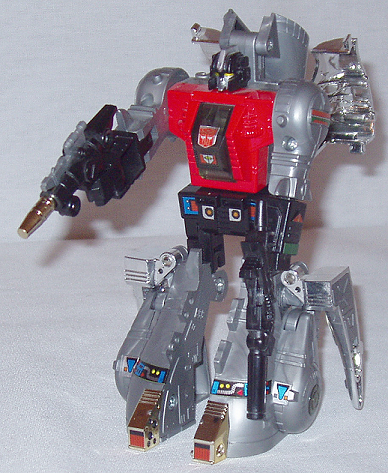 Because of the way the transformation works, robot mode is more poseable than you might expect for a toy from the '80s. You can bend the arms in at the elbows and wrists, and the knees, an above knee thigh joint, and you can stretch the legs out at the hips and make your Sludge do the splits. Sludge has a pretty decent range of motion! I have to say due to the better looking arms and properly placed head, Sludge wins out over Grimlock in robot mode, even if Grimlock's dinosaur mode is a lot better. 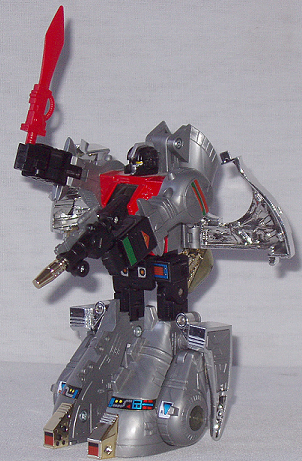 Sludge has pretty good accessories too, with a gun, a missile launcher, and a sword. This brings up probably the only obvious difference between the Transformer Sludge here and his Diaclone counterpart: the Transformers sword is red while the Diaclone sword is gold chrome. While the gold chrome definitely looks better, it's not like Grimlock where the crotch was changed from blue to red. I'm not sure if Sludge's teeth were filed down from the Diaclone original like they were on Grimlock, but since the Bronotosaurus was a plant eater anyway, it's a non-issue to me. Oddly enough, this is also one of the two Dinobots that was not reissued in Transformers: Generation 2, so your only choices if you want this toy are to get the Transformers version or the Diaclone version or one of the bootlegs. Is this a better toy than Grimlock? Not really. The sort of weak dinosaur mode hurts it, but the robot mode is pretty nice and while I have more fondness for Grimlock as a character, this is still a pretty good late Diaclone toy. It does have some of the common Diaclone problems (it looks really bad from the rear in robot mode, it is pretty fragile and easy to break) but if you are an adult collector, this shouldn't stop you. The Dinobots are all pretty good toys and Sludge is no exception. (C) 2010 Jeremy W. Kaufmann & CollectionDX 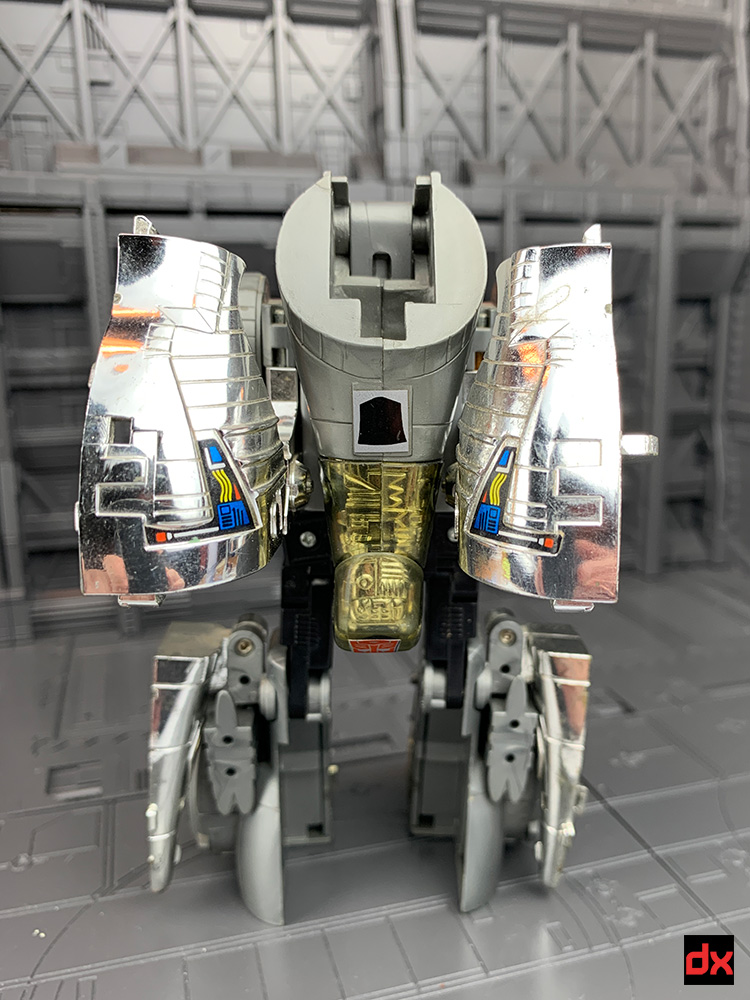 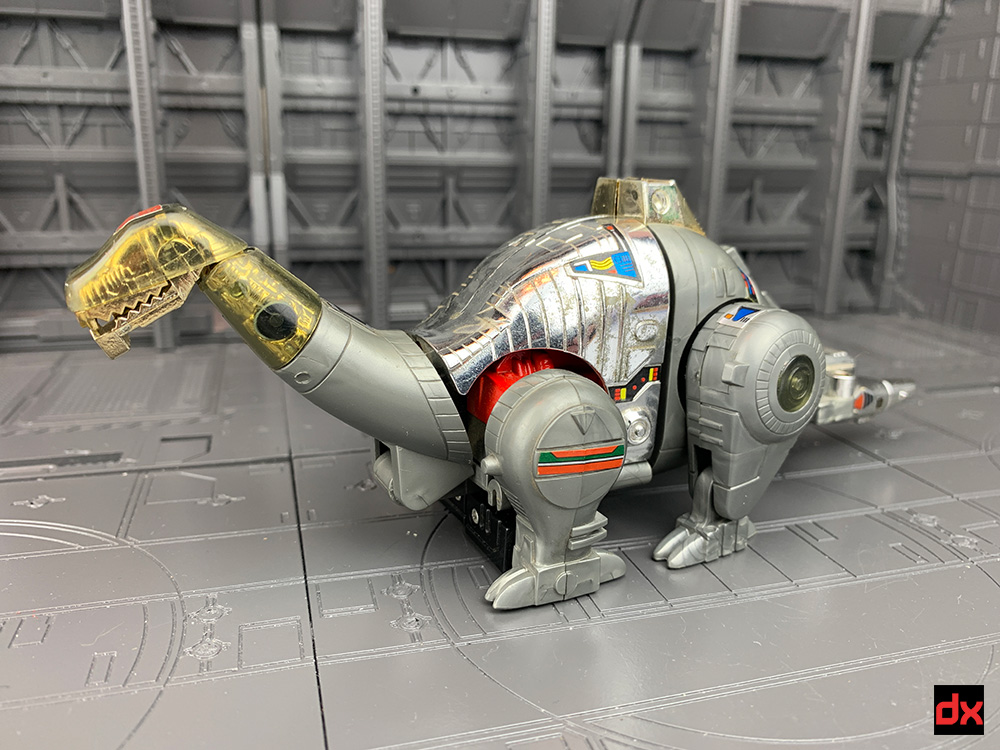 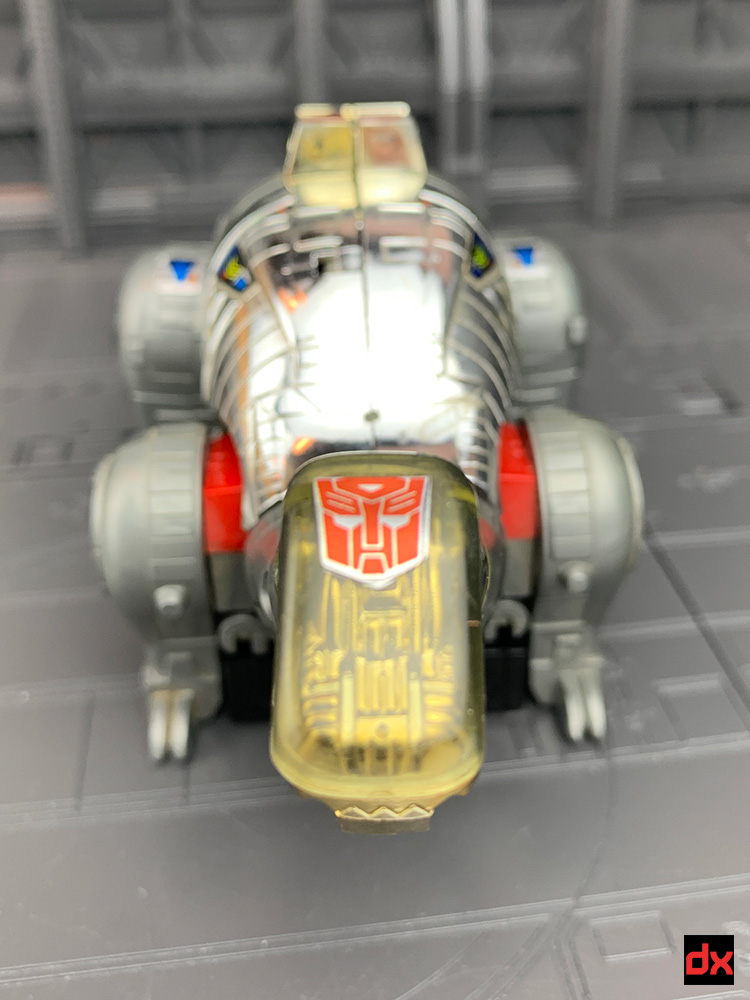 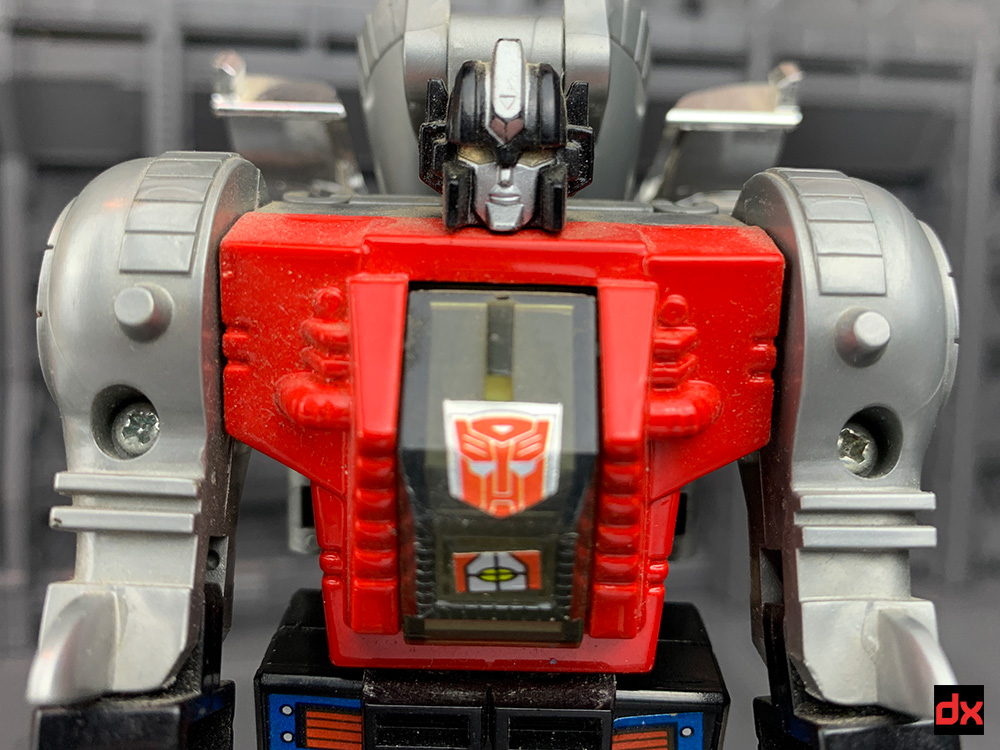 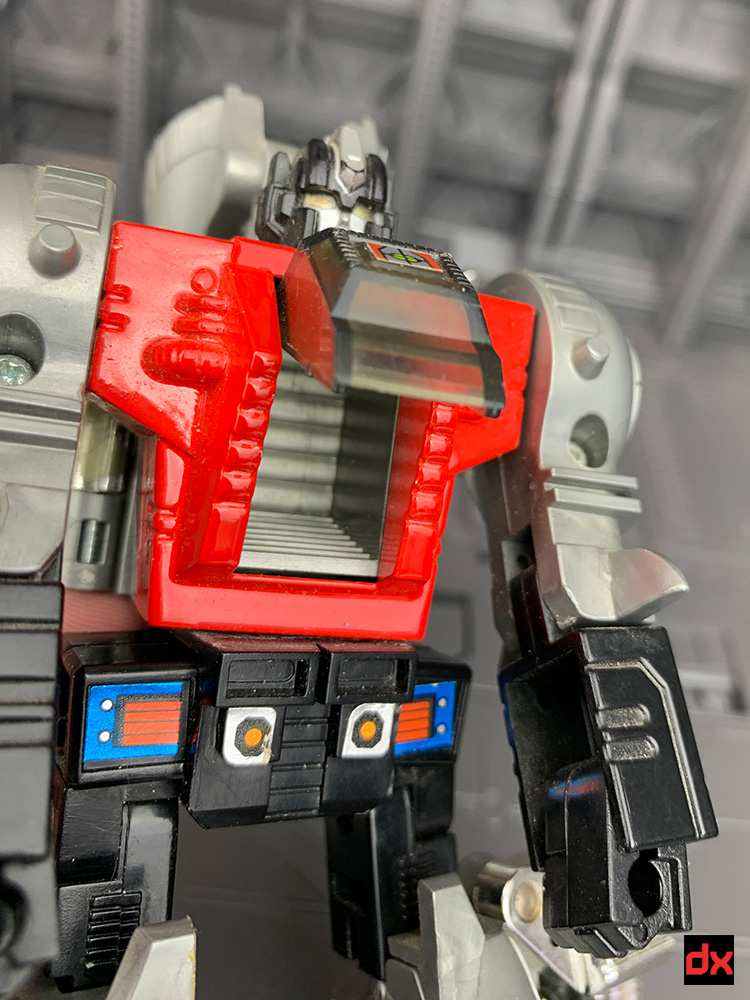 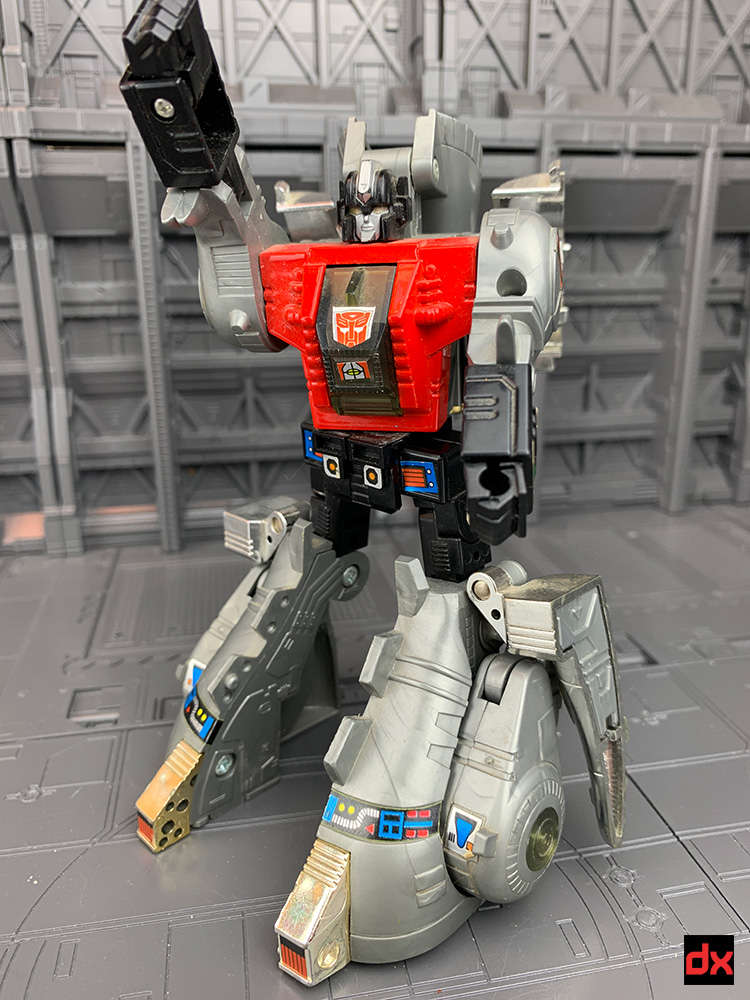 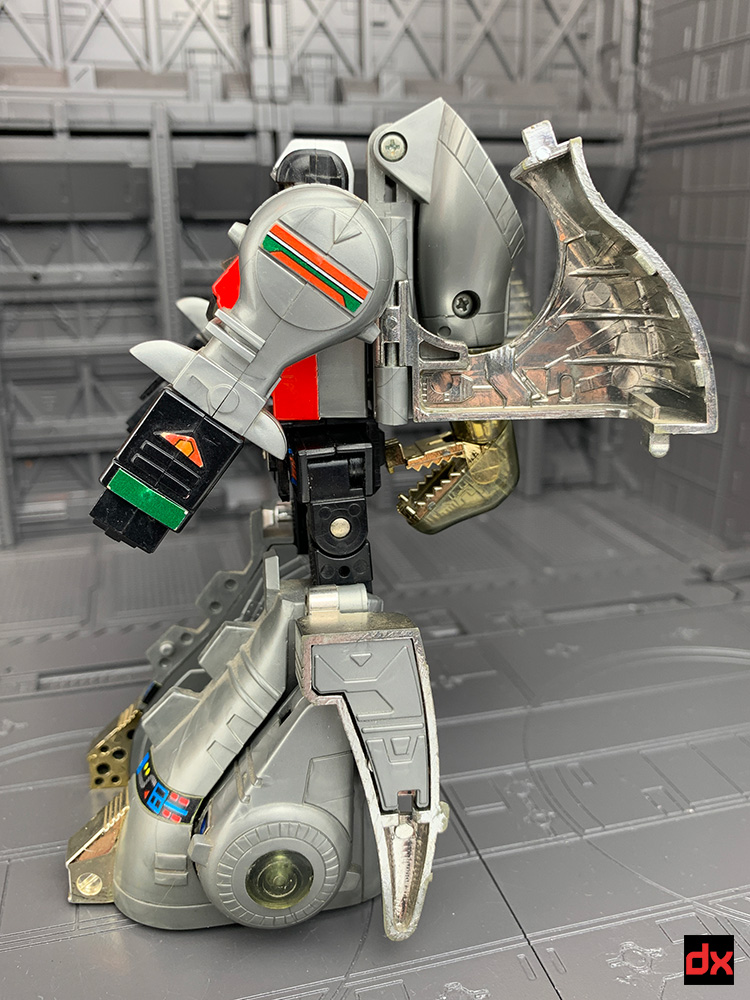 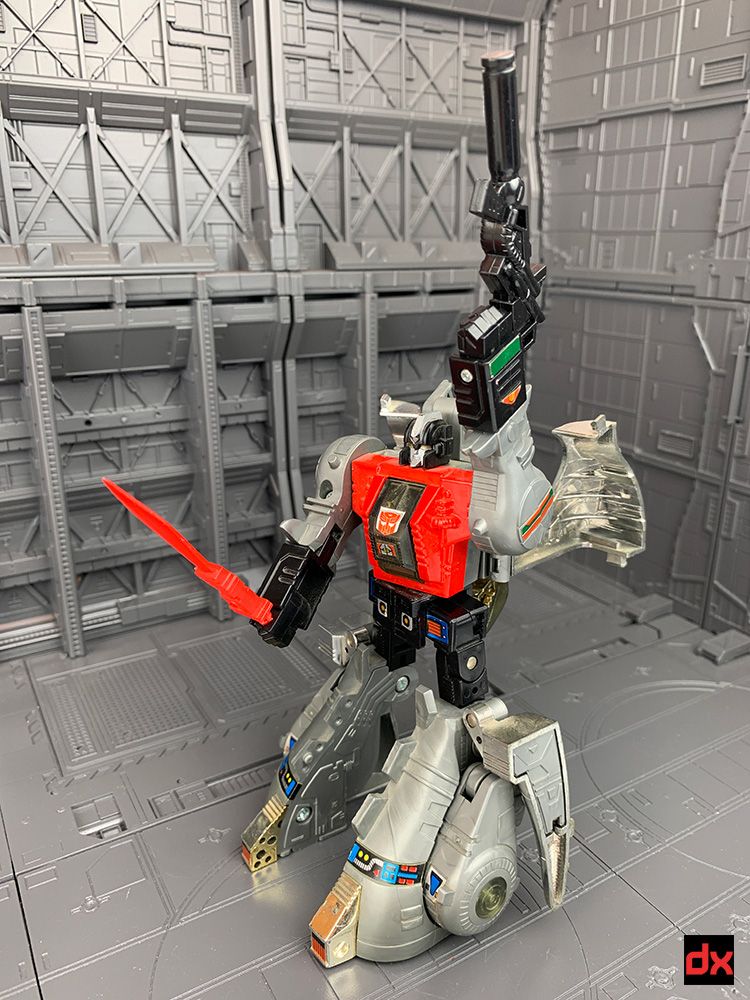 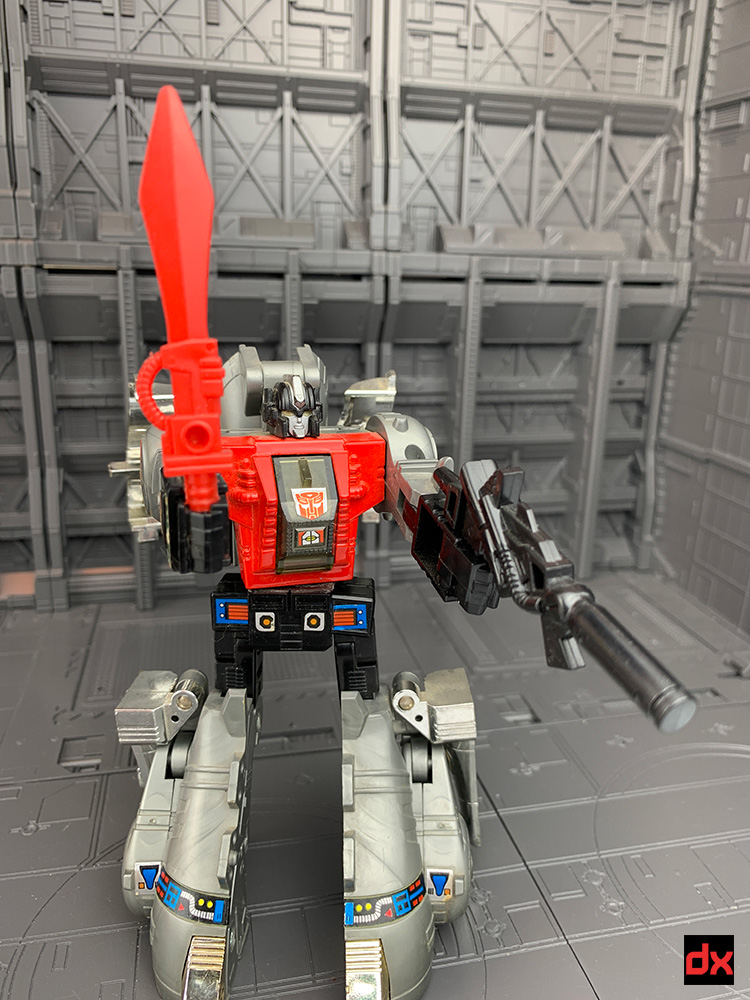 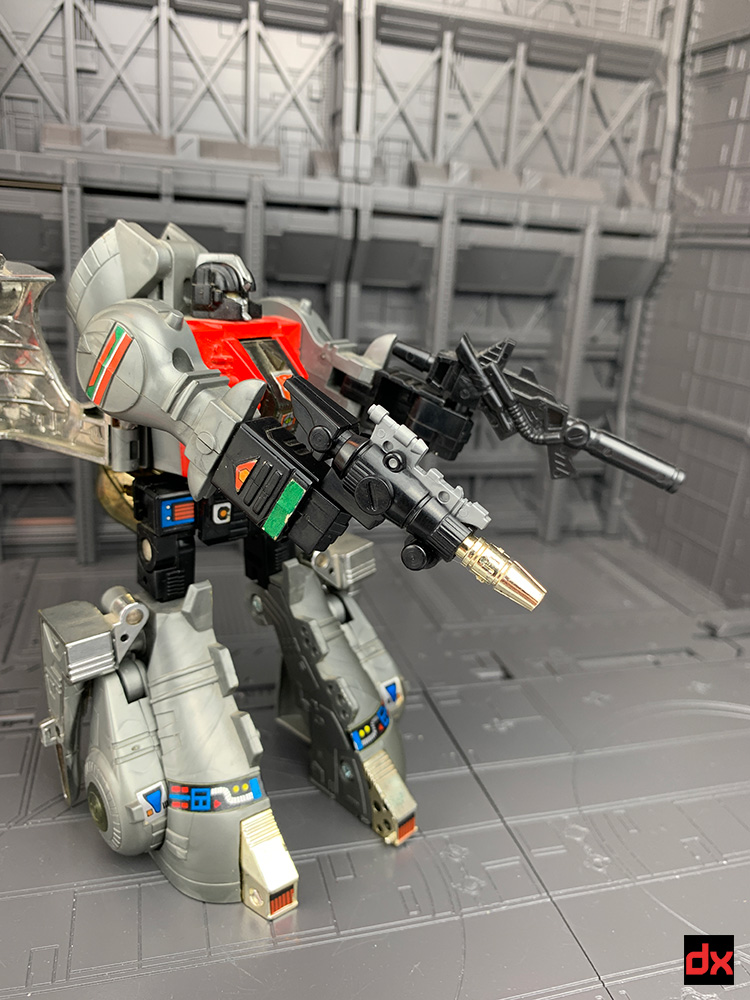 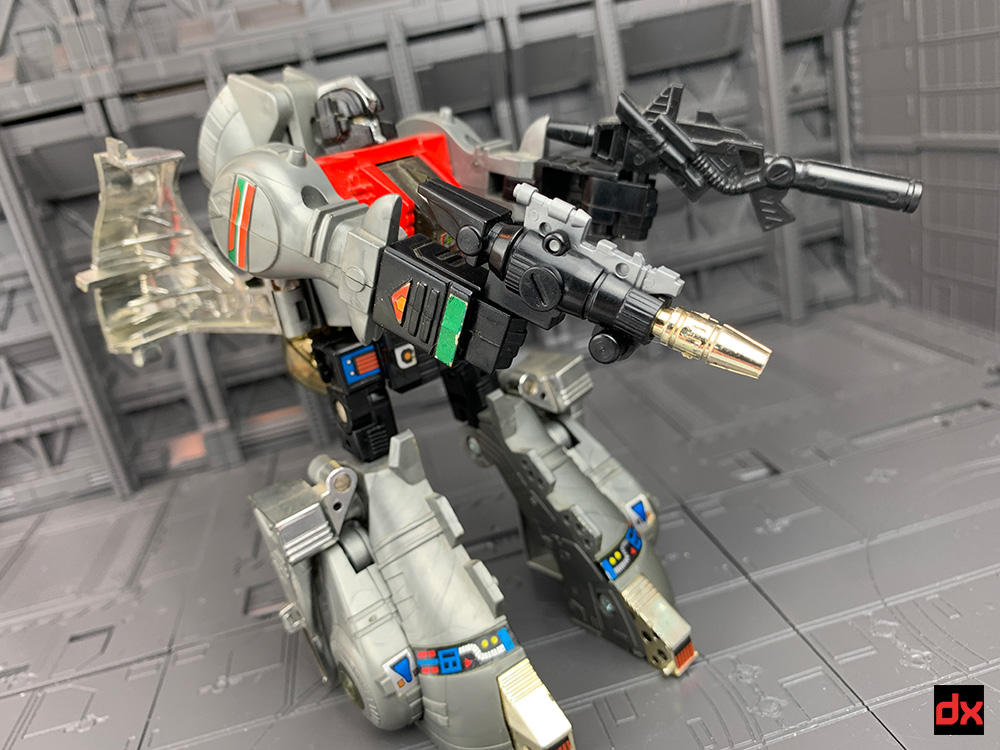 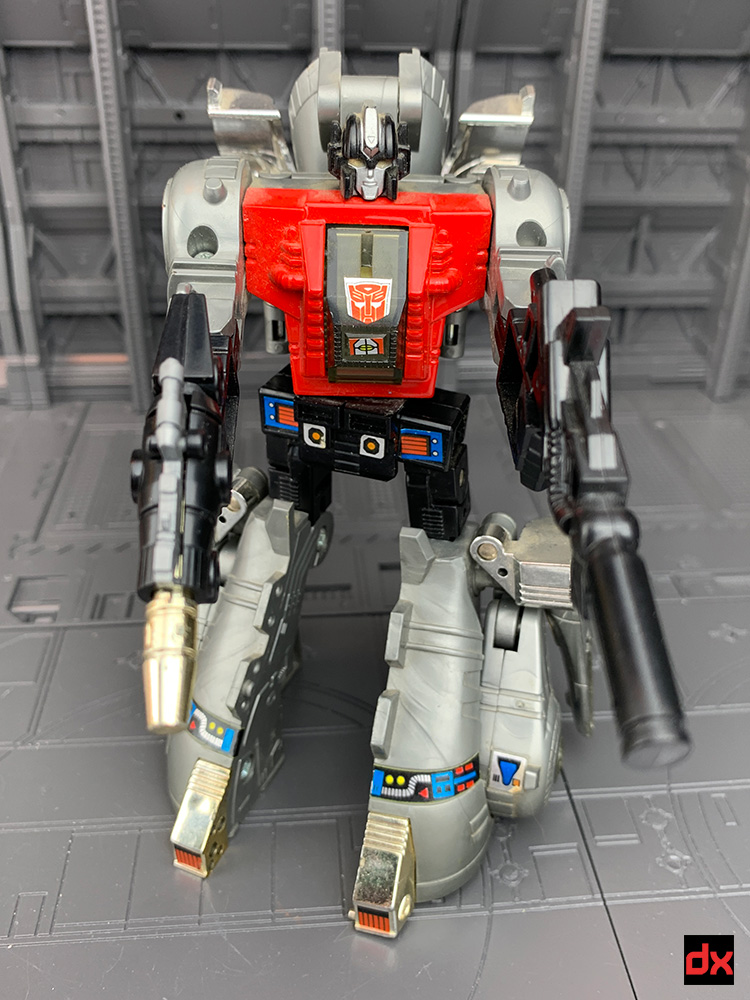 12 comments posted
Sludge is my favorite, and

Sludge is my favorite, and nothing you can say will change that <3

The well-articulated robot mode and his painfully stupid character just warm my heart. I agree that the non-posable front dino-legs is a disappointment tho.

I love that Quote! Now that is excellent screenwriting!

If I was ever going to purchase any G1 transformers it would be Dinobots!

I love all the dinobots! Because their disguises are dumb! :P Um guys... you know dinosaurs have been exticnt for 65 million years right? And they didn't look like cyber-dinos to boot! :P

It's so super robot stupid, you gotta love it. :)

I thought they were dinosaurs for the battle prowess,not for disguise purposes.

In the cartoon, the Dinobots were made specifically because the Autobots thought that robotic dinosaurs would be excellent at beating up decepticons.

All things considered, I'd say they were right!

Sludge was my favorite dinobot. I used to swim with him in the public pool.

Toy wise, I think Sludge was the best of the Dinobots in robot mode. Good proportions and articulation for an 80's toy. I LOVED the transparent plastic with the chrome underneath look that the Dinobots had.

You can only get the reissued ones if you're back in 1985 where Takara was alive and well.

the consensus here it seems we want our dinobots

And I want Takara back the way it was, but I can't b/c the fanbase got no backbone, the public got no backbone & it gave Hasbro Tomy the wrong message.

If we want our dinobots back here in this time and in this place, then we better go smuggle some moonshine.

can we also ask if it's too much for takara to provide a masterpiece soundwave as well?

What on earth are you talking about? Takara merged with Tomy, but so what? They're still doing the same things they always did. They even were able to reissue Omega Supreme and Sky Lynx BECAUSE of their merger with Tomy and they couldn't before that. What exactly do you think is wrong with Takara now?